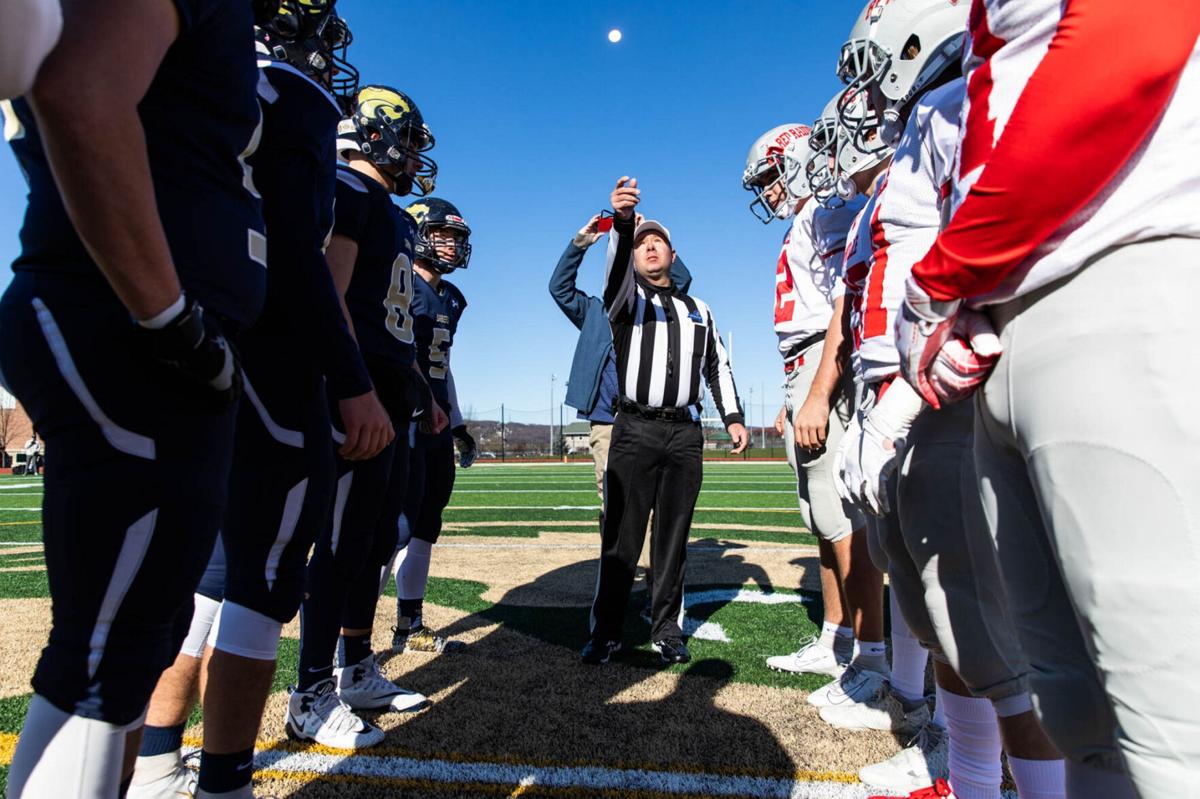 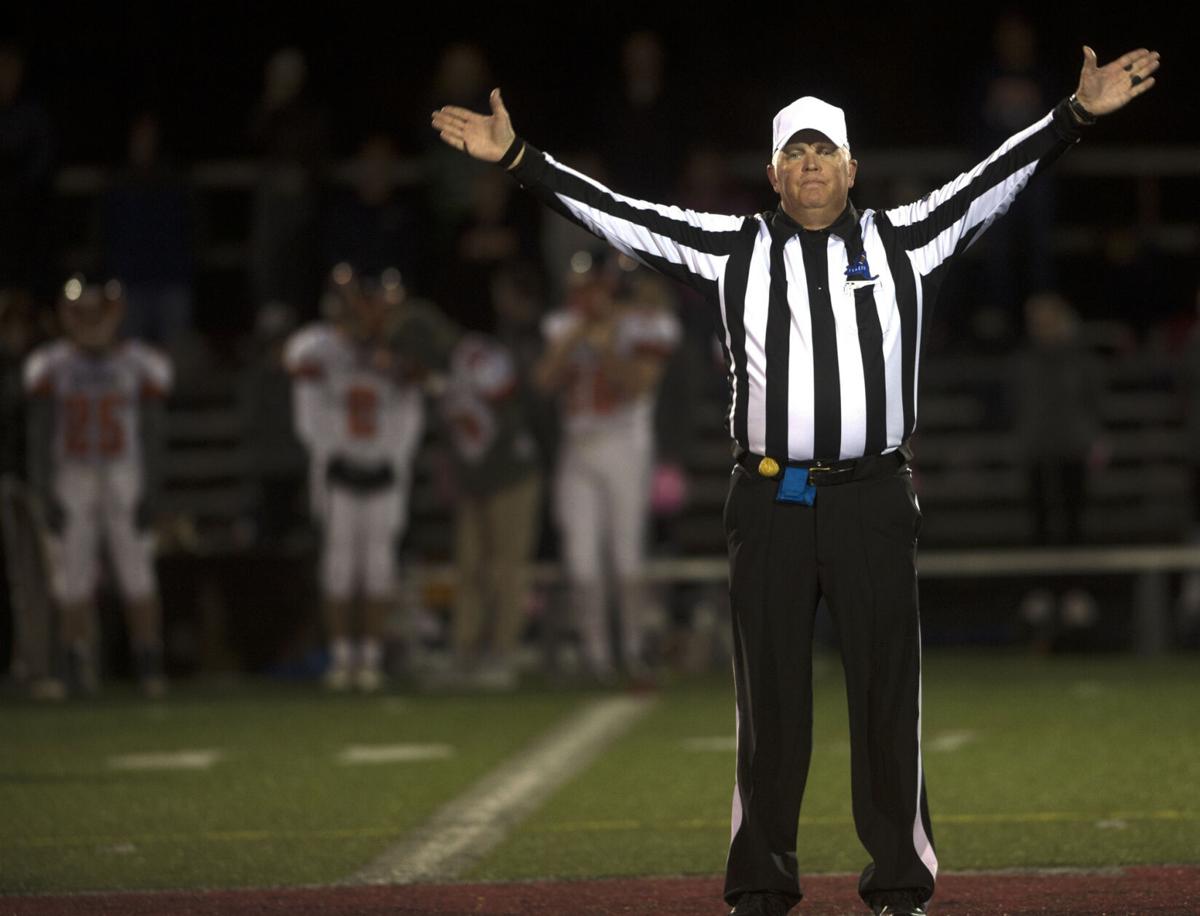 A referee signals for a timeout during a high school football game at Carthage High School in 2017. Watertown Daily Times 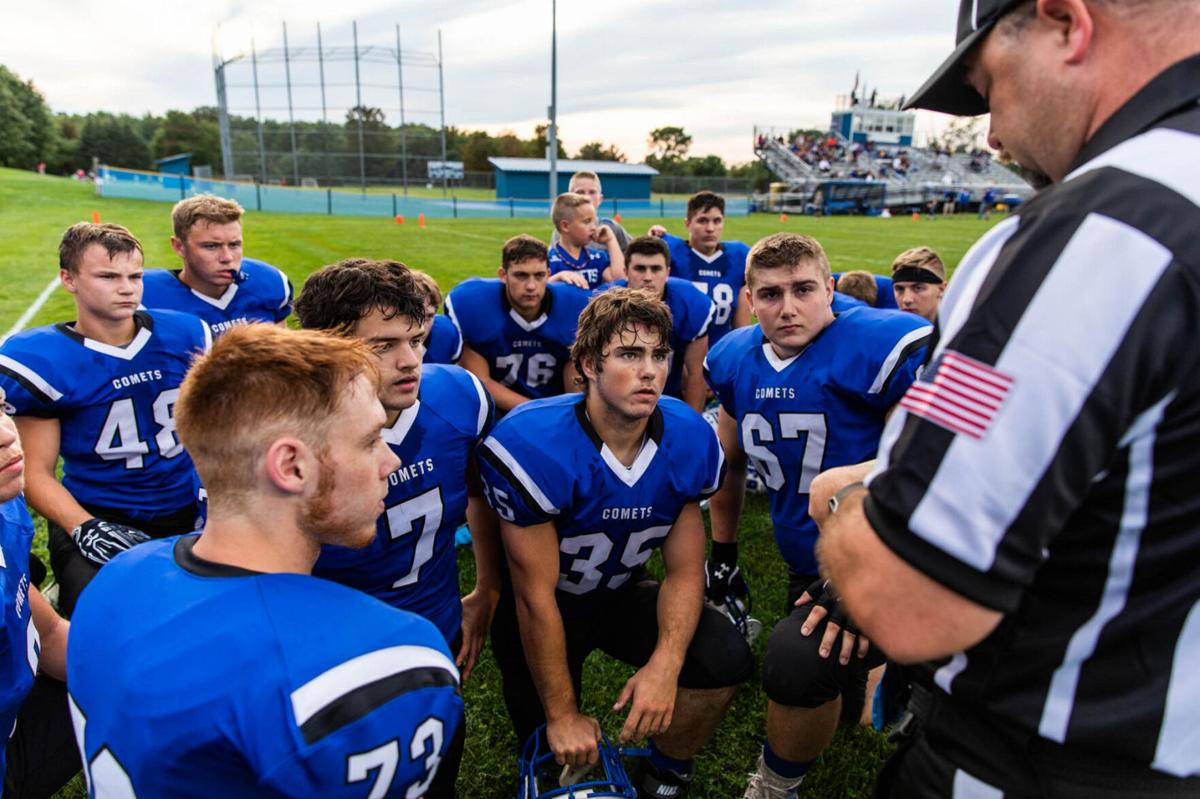 The Sandy Creek High School football team listens to a referee prior to the start of their game against Beaver River in 2018. Sydney Schaefer/Watertown Daily Times

A referee signals for a timeout during a high school football game at Carthage High School in 2017. Watertown Daily Times

The Sandy Creek High School football team listens to a referee prior to the start of their game against Beaver River in 2018. Sydney Schaefer/Watertown Daily Times

WATERTOWN — Games are like machines, it takes multiple parts to make one work. There are the players, then there are coaches, trainers, ball boys, the chain gang for football and, of course — the officials.

Playing high school sports safely amid the COVID-19 pandemic doesn’t refer only to players, coaches and fans. One of the groups most at risk is referees.

According to Bob Vancoughnett, the president of the Watertown Chapter of Certified Football Officials, safety has been a hot topic among the football officials going into this season. Like players and coaches, officials will be utilizing personal protective equipment, and possibly adjusting their pre- and post-game routines to reduce contact and the chances of infection.

“We currently have a committee convened to discuss just that,” Vancoughnett said. “A number of different things have been approved by the state and handed down as options, one of which is the use of electric whistles, so we don’t have to put a whistle in our mouth, the air and the discharge from the whistle can become a problem. Face shields, they’ve talked at the state level about allowing face shields to go on the officials’ hats, to work as a barrier, face masks are always an option.”

But even with precautions in place, a number of football officials in the Watertown chapter have decided that they won’t be spending their Friday nights on high school fields. While many officials are older, Vancoughnett said their decisions aren’t solely based on health.

“The other very real problem, in the event of an exposure, even if you don’t get sick, if you’re required to quarantine, what does that do to your livelihood, their jobs?” Vancoughnett said. “We’ve had a couple of officials, not only in our area but across the state, have elected to step back and say ‘Geez, I just can’t afford to miss 14 days of work if there’s an exposure.’ For a recreation that they love, they can’t justify it.”

The lack of high school officials is a dire situation across the country and the Watertown chapter, with territory stretching from Sandy Creek up to Alexandria Bay and Philadelphia, isn’t an exception. Not only could Watertown have more officials opt out this fall, the chapter hasn’t been able to recruit as easily as past years.

“We’ve had three or four that have braved the issue and have been present at our meetings and intend to continue on with us as far as I know,” Vancoughnett said. “So, we’re blessed to have those guys coming in, in the face of this thing, they don’t even know if they’re going to have a season.”

“We are going forward at the urging of the state and the sections,” Vancoughnett added.

Ed Murphy has been officiating high school football since 2010 and plans to do the same again this season if the games remain traditional 11-on-11. If New York follows Vermont’s lead and elects to play 7-on-7 football — an option that has not been mentioned publicly and appears unlikely — he would most likely opt out.

“For football, I think I would just need to get back in shape,” said Murphy, who also officiates baseball but there was no high school baseball season last spring. “That’s how I’ve been looking at it. When baseball season progresses into football season, it’s a nice thing for me because I’m limbered up, or whatever.”

A lack of officials will inevitably result in receiving help from neighboring chapters in Syracuse and St. Lawrence County, something that isn’t uncommon even before the pandemic. There still remains the possibility not enough officials to work a full night of football games.

“We work five men on a varsity game, the other games, the JVs or the modifieds, the schools will elect to use fewer, which is fine, but it may affect the coverage at home games. We may not have enough officials to cover a full slate on any given night,” Vancoughnett said. “I’m sure the schools will cooperate with us, they’ll be understanding and we’ll just have to work it out. If somebody plays a Saturday game instead of a Friday game, or even a Thursday game.”

For all officials in all sports, the desire to officiate comes mostly from a passion for the sport and a desire to help students pursue athletic accomplishments. The money that comes with it isn’t the primary reason for moonlight as referees.

For Mike Macaulay, a Section 10 boys and girls soccer referee, the money helps out a little.

“Usually in baseball I make enough money to pay for my school taxes,” Macaulay said. “Soccer gets me about the same for my town taxes. I know some (officials) rely on it. Mine just helps offset the taxes.”

The state has allowed practice to begin for all fall sports except football and volleyball Sept. 21. After a required number of practices, soccer referees, along with those who officiate field hockey, tennis, golf and cross country, will have the chance to take the field starting in early October.

But to Bob Devins, a cross country official, former Malone track coach and current member of the Canton school board, the path to a full, safe season, isn’t entirely clear.

“At this stage I have more questions than answers,” Devins said. “I’ve heard we can start on the 21st, but so far we’ve had no guidance from the state official’s association what things will look like.”

Vancoughnett believes there will be a clearer understanding of how this fall season will work following Labor Day weekend. The New York State Public High School Athletic Association is expected to release a return-to-athletics document today that will address many of the concerns that coaches, players and officials have expressed.