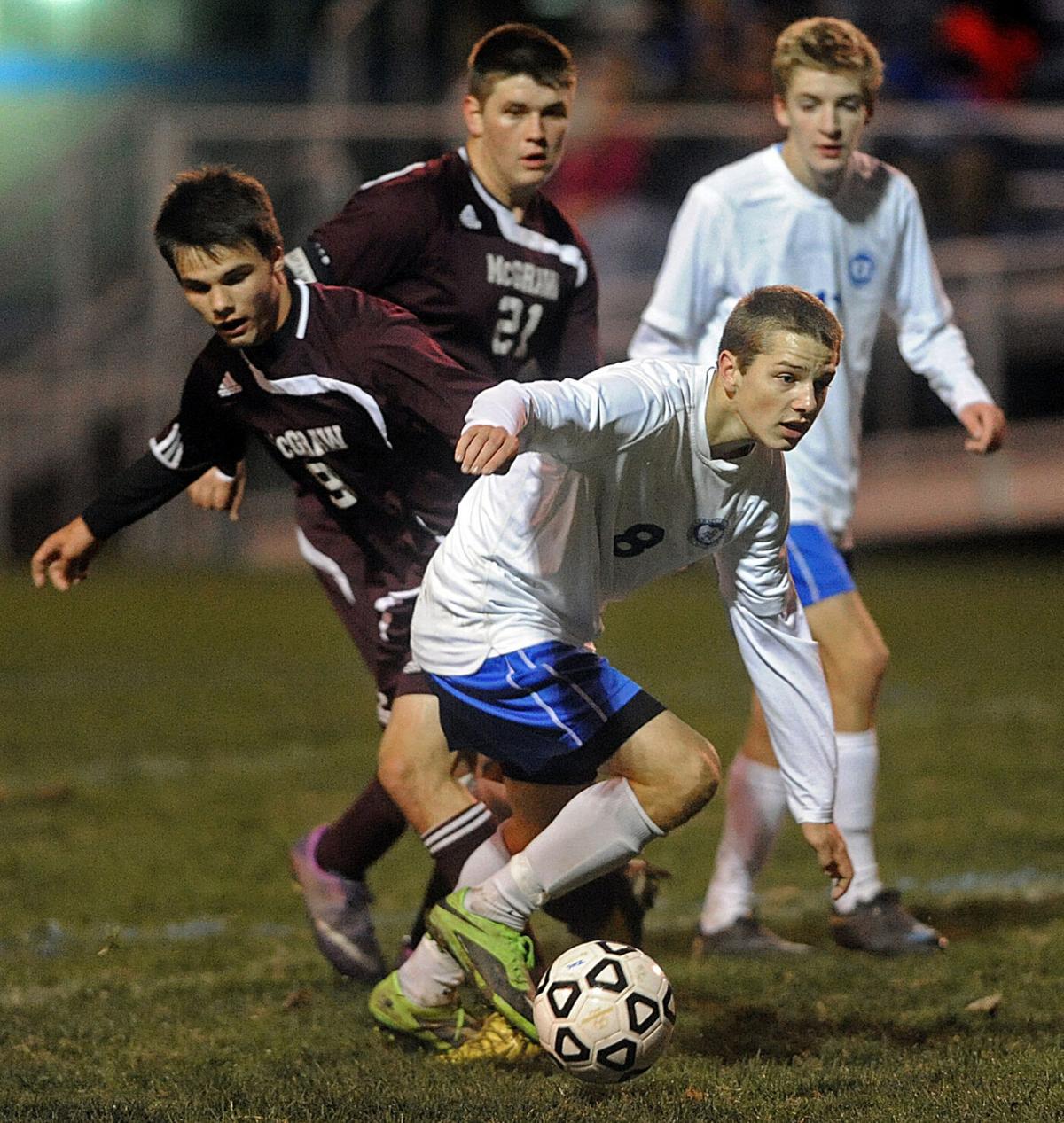 Immaculate Heart Central’s JP McClusky advances with the ball past McGraw’s Mike Smith during a Section 3 boys soccer playoff game in October 2013 at IHC. The Cavaliers have fielded a competitive team in the past but dwindling numbers forced it to try something new this year. Watertown Daily Times 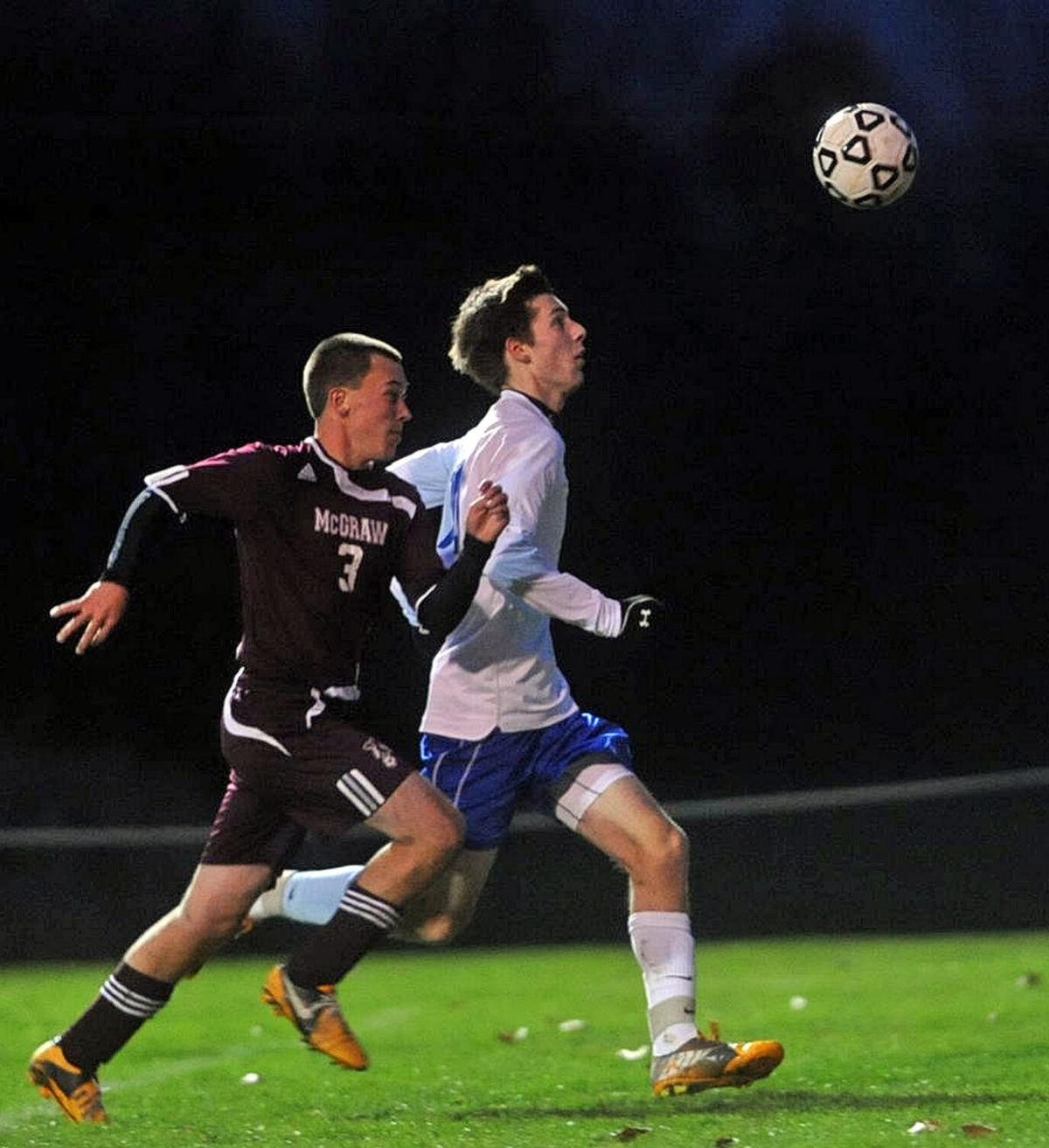 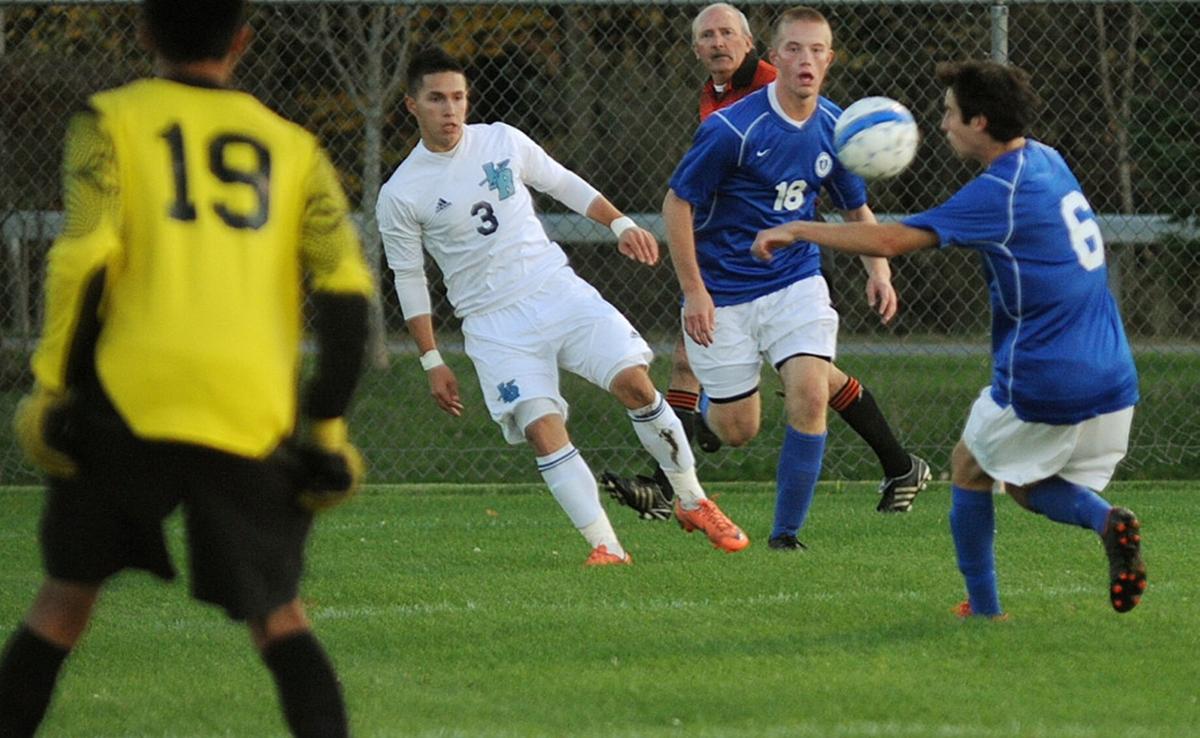 Immaculate Heart Central’s JP McClusky advances with the ball past McGraw’s Mike Smith during a Section 3 boys soccer playoff game in October 2013 at IHC. The Cavaliers have fielded a competitive team in the past but dwindling numbers forced it to try something new this year. Watertown Daily Times

WATERTOWN — The Immaculate Heart Central boys soccer team will have a new look this fall.

At a school with a rich soccer tradition, the boys team has faced numbers challenges over the past several years, according to IHC athletic director Tom O’Brien.

“The numbers were dwindling to a point where we wouldn’t have been able to field a team this year,” O’Brien said. “So we had to really look outside the box to try and get kids in and give our kids that are still there a quality experience.”

After some soul searching and research, the school reached out to the Black Rock Football Club of western Massachusetts and IHC is pairing up with the club to field a boys varsity team this year. With the partnership, they’ll form the IHC Soccer Academy.

“We got excited after talking to them not only about the program at their school, but we’re excited about the quality of the kids that they bring in,” O’Brien said. “They’re not just very good soccer players, but kids that are motivated to do well in school and get into the best colleges they can in America, so they’re motivated kids.”

Such a move may very well have saved the boys soccer program at IHC, which will also feature a new varsity coach.

Craig Wilkinson takes over the head-coaching reins, while Eddie Gonzalez, who has north country ties as both a team captain and assistant coach at St. Lawrence University, is the Cavaliers’ assistant coach.

“They’re pretty equal and there going to be splitting up the duties,” O’Brien said of Wilkinson and Gonzalez.

Mary Guyette, who coached the Cavaliers for the past 10 seasons, guiding the team to Section 3 titles in 2013 and 2014, has returned to Lyme, where she teaches and she’ll coach the girls varsity team once again.

Last year, the Cavaliers boys soccer team entered the season with just with 14 players on its roster. The program was also hit hard by the defection of several players who transferred to their home school district.

“We had four or five boys that were on the team transfer out right before the school year, so that left us pretty sparse,” O’Brien said of the 2019 season. “So we’re looking at carrying a roster of 18 to 20 players this year.”

The Black Rock soccer academy has placed players to play at the scholastic level all over the country, including at Northwood Prep in Lake Placid.

“They went from that in just two years to going to the finals of the Dallas Cup, which is probably the most prestigious club tournament around.

“They’ve got numerous kids there who get Division I scholarships, to like Stanford and West Virginia. The talent they bring in is just impressive, and they did it at another academy at a school in New Hampshire, which is very similar to us.”

O’Brien said the players from the Black Rock academy will attend IHC as students.

“I think it will help the diversity of our school and it will hopefully build a little excitement,” O’Brien said. “Even though I’m a little worried about (COVID-19), we don’t even know who and when we start playing games, or who can even come to the games. Right now it’s limited to just a couple family members per kid and things like that. So we’ve got athletic directors meetings this week to try and iron out the details of actually getting back to play with the protocols and things.”

The Cavaliers squad should also have an international flavor as of the five Black Rock players who have already arrived in town, one is from Guatemala and the other from Poland, with others from South American countries on the way.

“They’re bringing in 12 players and with the (COVID-19) it’s a little tricky, only a few of them will be here to start the school year in person, like four or five,” O’Brien said. “And the rest will be coming over the next few weeks as we iron out their tuition contracts and travel and quarantines and stuff like that.”

The Black Rock players will reside at quarters on the St. Anthony’s Church grounds on Arsenal Street, which were previously St. Anthony’s convent.

“I’m excited to get them here and get going, because it’s been a couple hard weeks getting the convent ready and working on budgets and other stuff, our staff at IHC is really dedicated, we have three or four people who have been really critical in helping me,” he said.

Because of this partnership between IHC and Black Rock, this year’s Cavaliers team won’t be eligible to play in the Frontier League this season.

“We’ll be playing an independent schedule with some other prep schools and some club teams from upstate, but we can’t travel too far,” O’Brien said.

They will be able to play a nonleague schedule, which may include games against Northwood as well as other private schools across the state, such as Albany Academy and Nichols School in Buffalo, travel permitting because of the coronavirus.

The prospects of IHC playing a soccer season this fall, like every other school in the Frontier League and Section 3, hinges on what transpires in the next few weeks.

Last week, Gov. Andrew Cuomo announced that low-risk sports, which include soccer, could be played this year, with the startup date on Sept. 21, when teams could begin practicing.

Later in the week, the New York State Council of School Superintendents sent a letter to Cuomo, asking that he reconsider his decision to allow low-risk high school sports to practice and play and high risk sports to only practice come Sept. 21.

The New York State Public High School Association held a meeting Thursday, responding that its COVID-19 task force will meet today “to discuss and review the state guidance” that it “is working on a document to distribute to our membership that details what is needed to return to athletics on Sept. 21st.”

The NYSPHSA said Friday a document should be released on or before this upcoming Friday, saying “there are still questions we need to examine,” and adding, “We’ve got a lot of work to do.”

“They gave us the green light to start on the 21st and I know that the superintendents association went against it, but I can definitely see us playing soccer up here in the fall,” O’Brien said. “It’s nice to know that the low and moderate sports will be playing.”

O’Brien, who took over as athletic director at IHC last year, added: