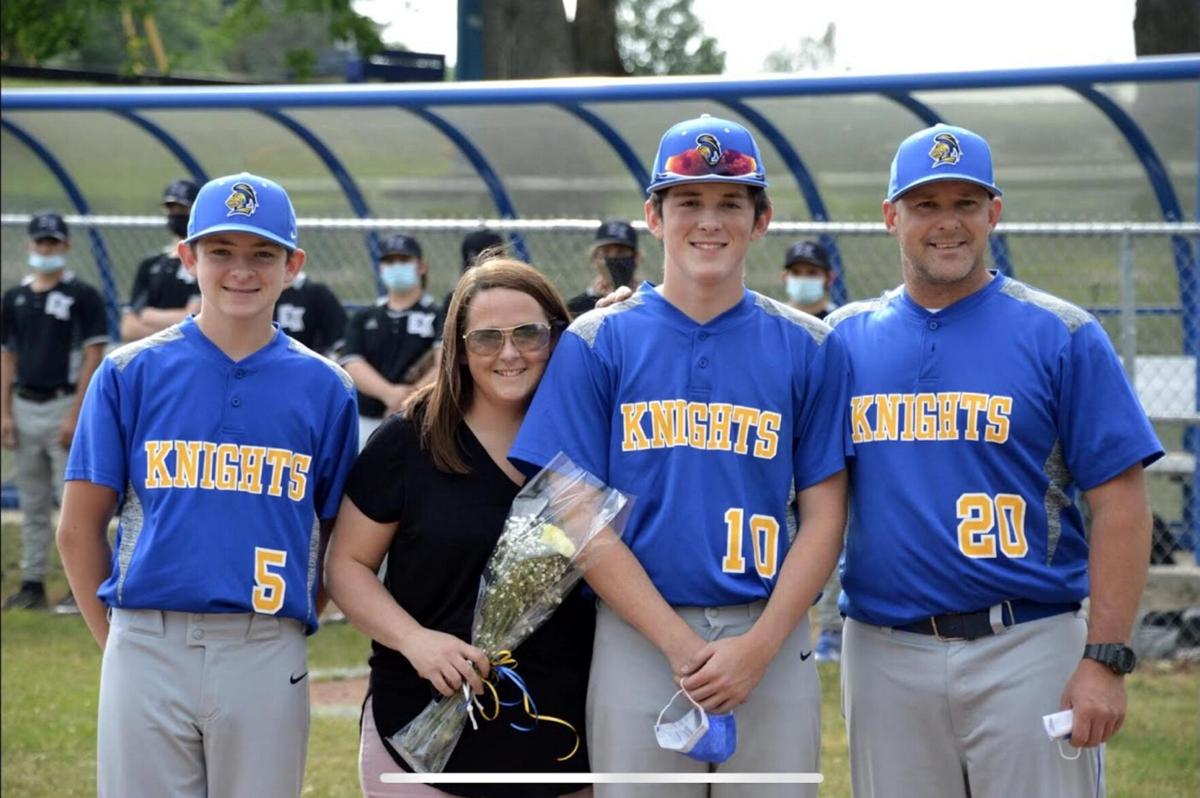 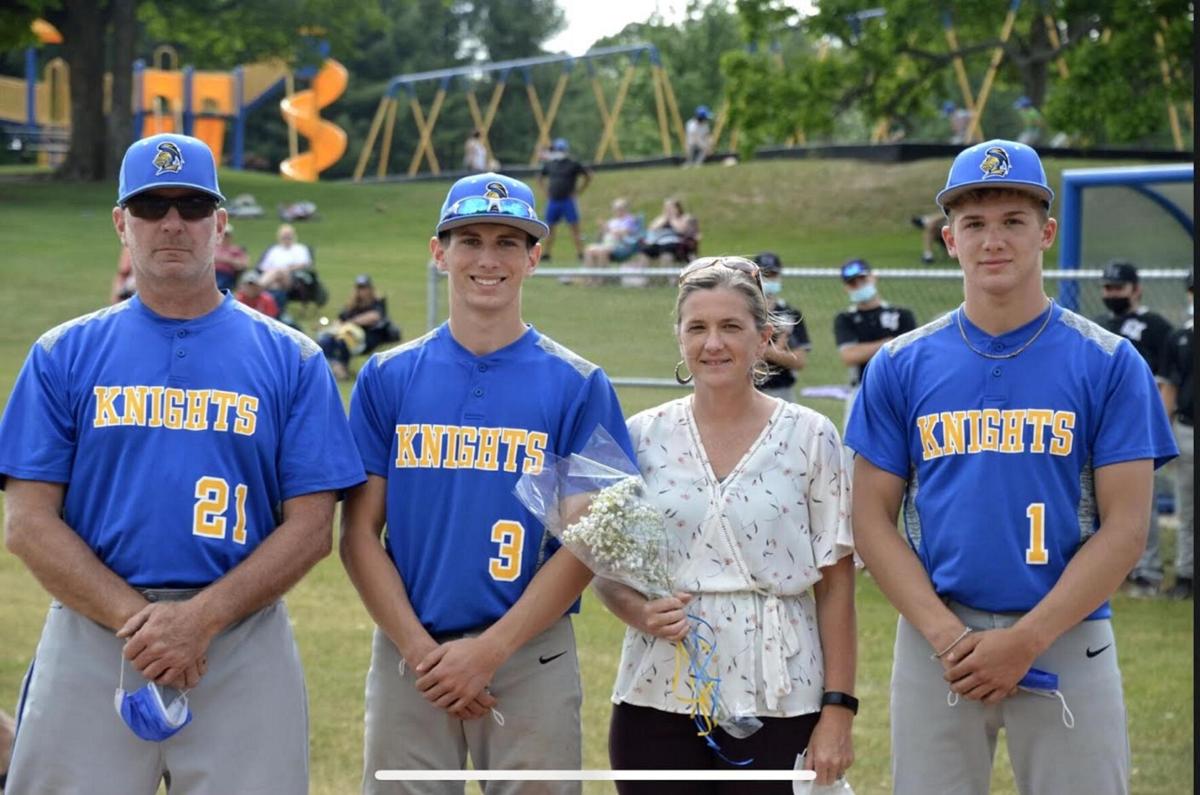 Lisbon Co-Captain Jack LaRock was honored on Senior Day along with his parents Coach Darren and Cassidy LaRock and brother Ben LaRock, right.

Lisbon Co-Captain Jack LaRock was honored on Senior Day along with his parents Coach Darren and Cassidy LaRock and brother Ben LaRock, right.

Lisbon Central completed the final week of the NAC West Baseball season the same way they started the first week of the campaign. Double digit scoring in one-sided victories as the Golden Knights downed Edwards-Knox 16-1 in their Senior Day game to clinch the division title and then bested Madrid-Waddington 14-3 to notch a 10-0 season.

The Knights (12-0) will compete for the Section 10 Class C title this week looking to reach Friday’s championship game. The Knights enter the postseason with a number nine state ranking compiled by MaxPrep which includes Class AA, A, B, C and D team. McQuaid Jesuit of Rochester heads the poll.

The current campaign showcased a Golden Knight squad determined to put severe disappointment behind them. In 2019 Lisbon reactivated its program after a two-year hiatus and with a group of young players who honed their skills at the modified level and in summer youth baseball under the direction of Coach Dave Gravlin and Assistant Coach Darren LaRock.

The young Knights came of age in the Section 10 Tournament and defeated top seeded Heuvelton for the Class D title and won the regional title and were off to the New York State Final Four.

The Knights were in the early stages of practice last season and excited about their prospects to return to the state tournament when the unthinkable happened. COVID-19 became a global pandemic and all high school spring sports in New York State were cancelled. In the summer months many members of the team played on Lisbon’s entry in the North Country Youth Baseball Association which followed the intricate protocol to be able to have games.

Then came the bitter sweet announcement in February that spring sports in Section 10 would be permitted but that the New York State Public High School Athletic Association cancelled all state tournaments.

The Knights regrouped again and adjusted their ultimate goals to winning the NAC West Division title and a sectional title with a relatively young team featuring only two seniors in captains in catcher Jack LaRock and infielder Tyler Gravlin.

Two seniors who emerged a leaders at the modified level and determined to bring Lisbon Central to an elite level in varsity baseball. The captains are the sons of Head Coach Dave Gravlin and Assistant Coach Darren LaRock and both have brothers in Lucas Gravlin and Ben LaRock on the team.

Jack LaRock has been instrumental in the maturity of a very deep pitching staff headed by three juniors in his brother and hard-throwing junior righthander Ben LaRock, two lefties in Griffin Walker and Jayden Williams and rapidly emerging sophomore Isaac LaRock. Gravlin has been role model for a group of teammates who have followed example for improving hitting technique and executing the basics of the game.

“Im really proud of Jackson and Tyler. They have accomplished so much and have great memories which will last a lifetime,” says Coach Dave Gravlin.

In their final home game both players showed their intention of adding to the volume of memories as both players crushed their first homeruns of the season along with Isaac LaRock.

“Those homeruns were shots, the guys really hit the ball hard in the Senior Day win,” said Coach Dave Gravlin.

Tyler Gravlin finished the regular season with a .553 batting average with four doubles, two triples, one homerun and 10 stolen bases.

“I have been able to coach Tyler since T-Ball. It has been amazing to see the growth of his skills and confidence on the baseball field. He has become a really productive hitter,” said Coach Gravlin.

“Prior to breaking his elbow he was an exceptional pitcher and defender. He’s done a good job working hard on his throwing to build back his arm strength and accuracy.”

LaRock has drilled seven doubles, one triple and one homerun in hitting .500 with nine stolen bases.

“I have been to have coached Jackson for the last eight years. He has been the leader of every team he’s played on. Not just baseball but soccer and basketball,” said Coach Gravlin.

“He has always been a joy to coach and be around.”

The captains lead a team which featured eight players batting over .400 and four pitchers who have combined to allow just seven earned runs and a 73-26 strikeout to walk ratio.

Ben LaRock also batted a team high .571 with eight doubles, Isaac LaRock hit .538 with seven doubles and one homerun, Jayden Williams hit .500 with one double, one triple and one homerun, Lucas Gravlin batted .481, Griffn Walker hit .474 with with one double and one triple, Trenton Williams batted .533 with three doubles, Storm Walker hit .514 and Colin Parmeter hit .294 with two doubles and one triple.

Lisbon Central had clinched the NAC West Baseball title on June 2 so the Golden Knights and Heuvelton were both looking to gear up for the Section 10 Tournament in regular season finales on June 4.

Lisbon completed a 10-0 NAC West Championship with a 14-3 win over Madrid-Waddington and Heuvelton finished at 8-2 with a 17-5 victory at Morristown,

There will be no New York State Tournament this season but there will be a playoff between the four Class Champions for an Overall Section 10 Championships following the format used in basketball.

Lisbon 14, M-W 3: Griffin Walker climaxed an outstanding regular season for the 12-0 Knights’ pitching rotation striking out five and walking three in a five-inning two-hitter. Walker also went 3-3 with a triple and two RBIs at the plate where Jayden Williams belted a three-run homerun, the Knights fourth homer in the last two games, and Jack LaRock (RBI) delivered a double and two singles.

“We had a good season and we go on to the sectionals looking good,” said Heuvelton Coach Dave Steele.

“Walks have been a downfall throughout the season and they killed us again today. But we have hit the ball pretty well,” said Morristown Coach Glenn Colby.

“We are just getting our pitching staff together this season and we hope to develop our pitchers in a summer team.”