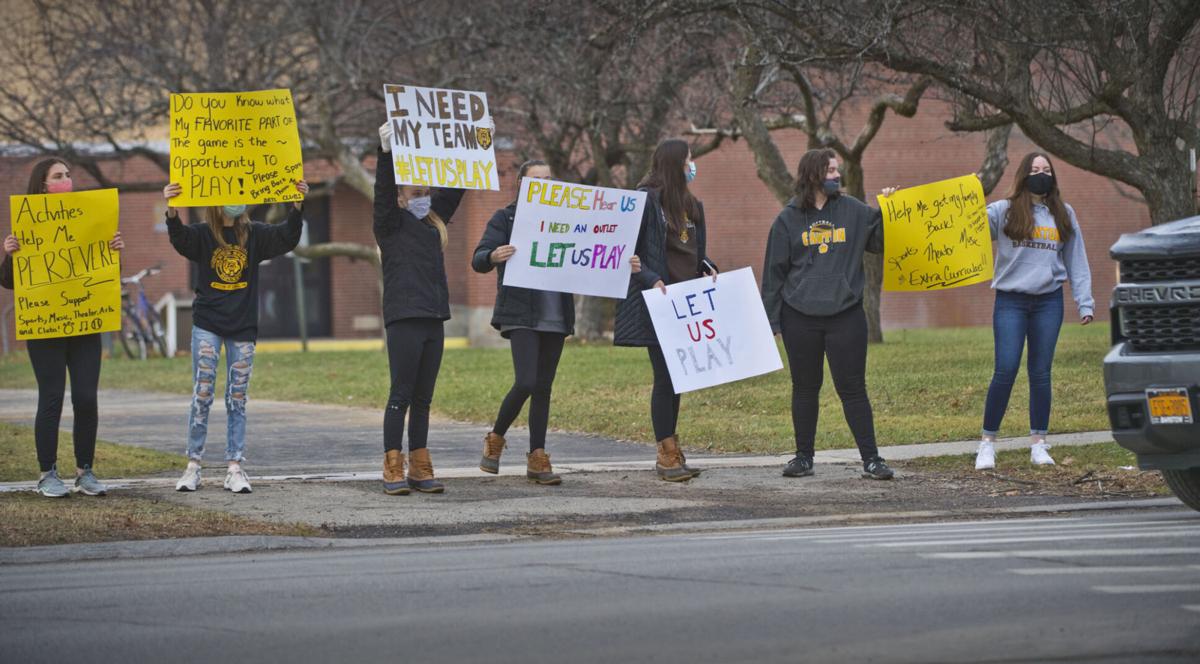 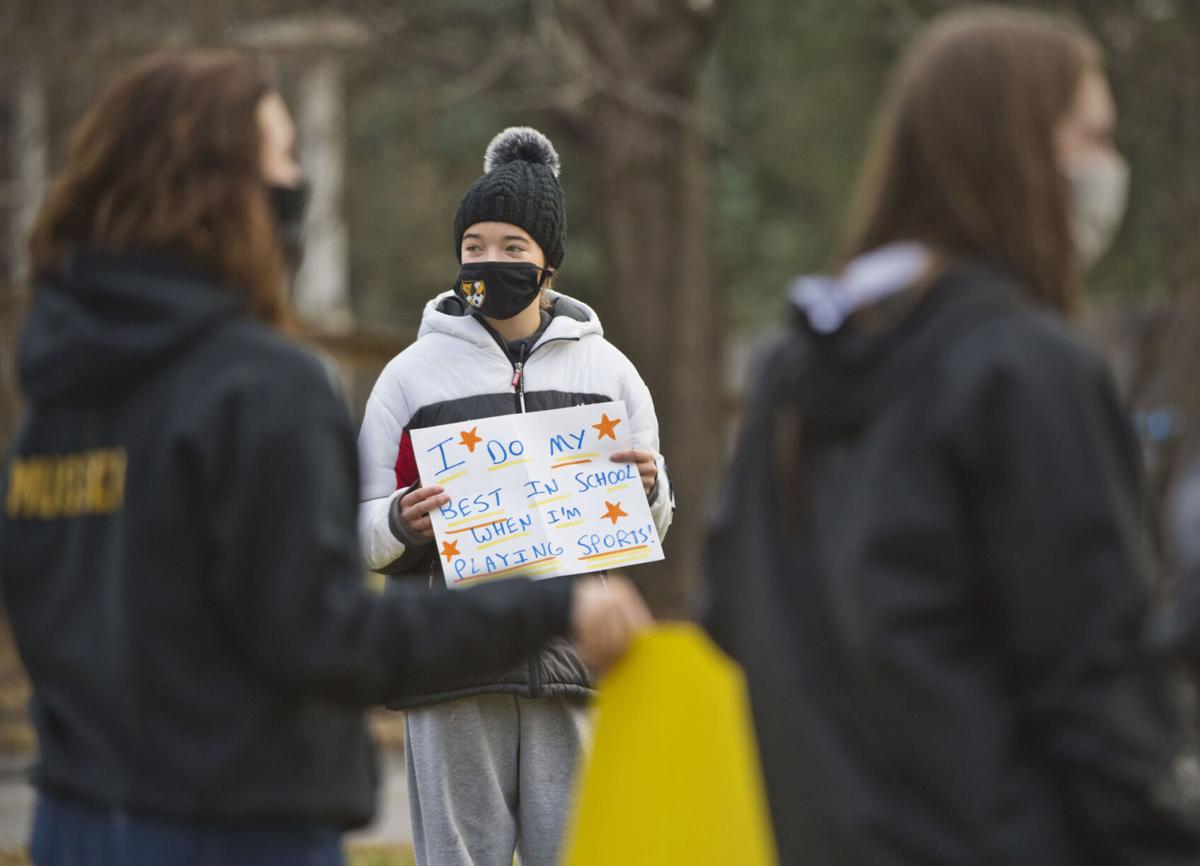 Canton Central students hold signs in support of sports on Friday as they demonstrate in front of the district office on State Street. Christopher Lenney/Watertown Daily Times 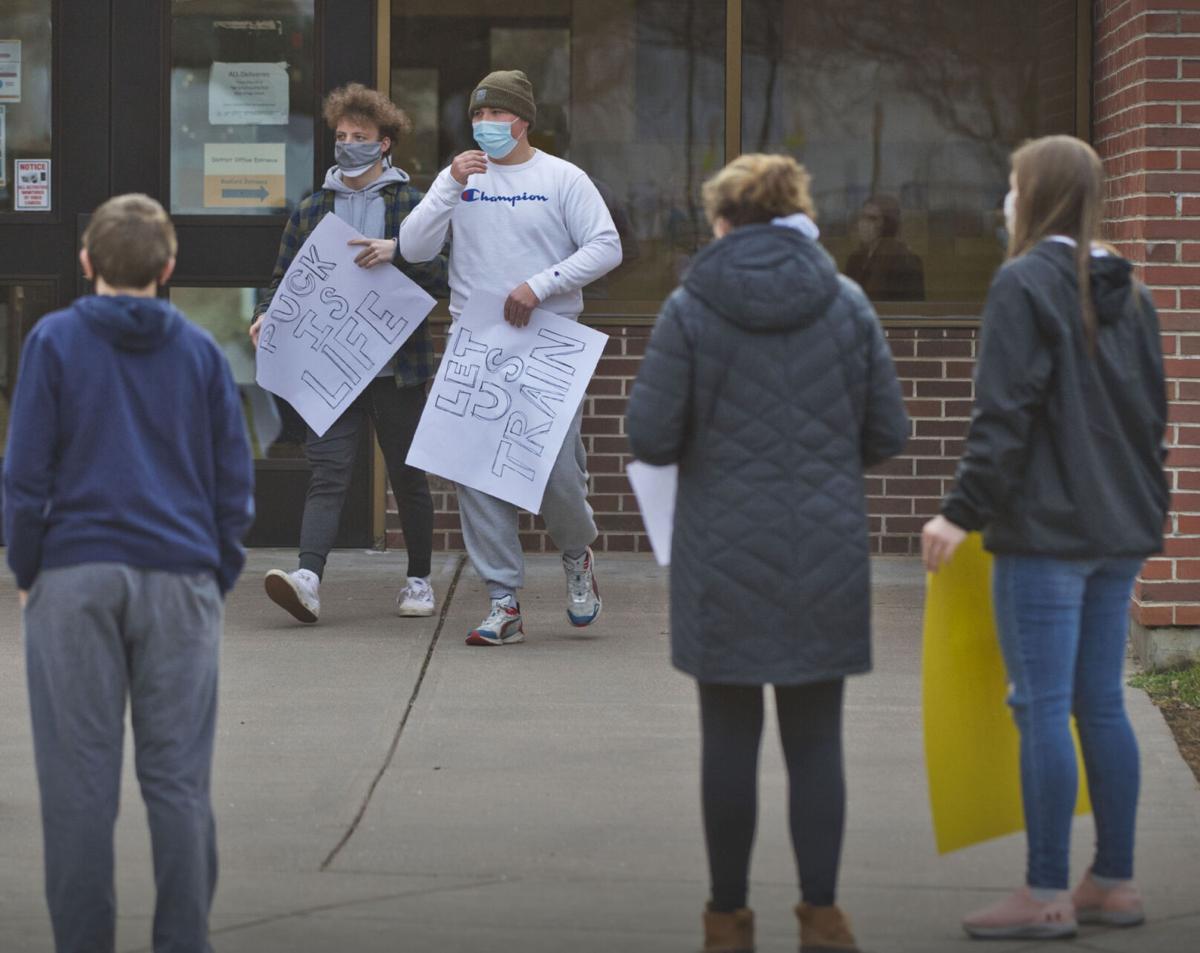 Canton Central students hold signs in support of sports on Friday as they walk past the district office on State Street. Christopher Lenney/Watertown Daily Times 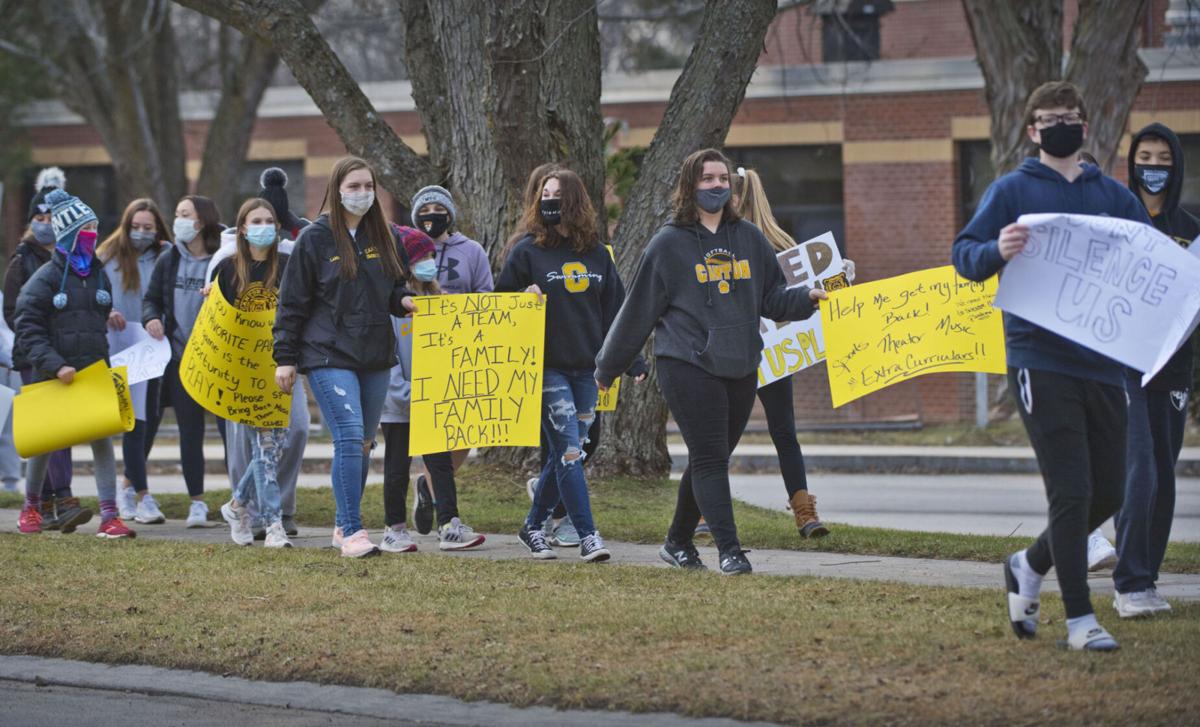 Canton Central students hold signs in support of sports and extra curricular activities on Friday as they walk down State Street as they demonstrate in front of the school. Christopher Lenney/Watertown Daily Times

Canton Central students hold signs in support of sports on Friday as they demonstrate in front of the district office on State Street. Christopher Lenney/Watertown Daily Times

Canton Central students hold signs in support of sports on Friday as they walk past the district office on State Street. Christopher Lenney/Watertown Daily Times

Canton Central students hold signs in support of sports and extra curricular activities on Friday as they walk down State Street as they demonstrate in front of the school. Christopher Lenney/Watertown Daily Times

Once a week Jim Whitley gets his Indian River girls basketball team together to train. But it isn’t training in the traditional sense, COVID restrictions don’t allow that.

Every Monday, most of Whitley’s team convenes in the gym for COVID-safe intramurals, which last for an hour and a half — so, basically, layups, shooting and dribbling drills and modified 5-on-0’s.

All the while Whitley tries to maintain a positive energy, which isn’t always easy for himself or his players. While he remains hopeful that there is a winter season, even he, a veteran coach with 30-plus years of experience, can see the writing on the wall.

The chances of getting that “normalcy” back anytime soon, look bleak.

“I would say most people don’t think we’re going to have a season,” Whitley said. “But I would like to think that, I understand the soccer season was outdoors, but in Section 10 there were very few cases at all, as far as the sports aspect of it. Right now it’s pretty bad and it would be almost impossible to have a regular practice and go on the road, there are so many things that you have to think about.”

Public schools throughout the state were planning to begin high-risk sports on Jan. 4. Along with basketball, this included wrestling, ice hockey, volleyball and competitive cheerleading. But a glance at the state’s rising daily new cases, hospitalizations and deaths says a decision to allow New York high schools to resume high-risk athletics appears to be a ways away.

The NYSPHSAA acknowledged that last Friday when they scrapped the Jan. 4 date and officially set the start of winter high-risk sports at “to be determined.” More specifically, to be determined by Gov. Cuomo.

Rhett Palmer, a junior on the Canton boys hockey team, was disappointed, but put on the strong face that so many athletes have had to wear this year.

“I also understand the situation though,” Palmer said. “If these are necessary precautions that will save lives and make things normal again, I think it’s the right thing to do. A sacrifice now may be beneficial in the future. This year is just different.”

The year is different, and there is no precedent for it. But, for the schools who had a shot at that title, losing those state championships is another gut punch.

Lowville boys basketball feels it as much as any.

In 2019 the team left the court in Binghamton’s Floyd L. Maines Veterans Memorial Arena in tears, having just experienced an overtime loss to Glens Falls in the state title game. At the time, the sadness was partially cured by a sense of hope. The Red Raiders were sure to be back.

That was nearly two years ago, and another state championship has yet to be played, let alone one that featured the Lowville boys.

To a degree, that team’s window closes after this year with both Aidan and Gavin Macaulay graduating.

For many of the Raiders, their careers were supposed to culminate with a state title.

“I’ve got some kids that have busted their butts for nine years,” Lowville coach Zach Shambo said. “To not see it through last year and to turn around and have it essentially ... the season’s going to be totally different than anything we’ve been at before.”

Shambo pointed out that unlike at the college level, high school athletes don’t get that extra year of eligibility back. A lost year is a lost year.

For the seniors, heartbreaking doesn’t fully describe it. And for younger teams, the effects of a lost year is yet to be known.

Whitley doesn’t have any seniors on his squad, but he will have to deal with his team losing a key year of growth.

For Adrien LaMora, the 2020-21 season was supposed to be the year she crossed the 1,000-point threshold. But more than achieving that accomplishment, she was excited to show off her growth. This was her best offseason yet, but she hasn’t had the opportunity to prove it.

“Before we were able to practice, I was running four miles every day and then I’d shoot and then I’d run four miles the next day and shoot,” LaMora said. “We’d go to (AAU) tournaments down in Pennsylvania and I’d do really well. Now coming back here and I can’t show anybody that.”

Aside from her weekly intramural work at Indian River, LaMora has been able to play with her AAU team, the Syracuse Royals, every weekend in Rochester.

Even when they’re not competing in tournaments, the Royals are able to play actual intrasquad basketball games, they just need to wear masks.

While it provides some sense of normalcy, it’s still far from normal. To LaMora, wearing a mask while playing feels cumbersome and is a constant reminder that life is different now.

Her current AAU season is winding down before it begins again this summer. With some interscholastic sports approaching almost one year with no competition, club programs like AAU are becoming even more important for a high schooler’s athletic development.

Whitley and Shambo don’t necessarily see north country student athletes transitioning to AAU full-time, but it will continue to be an important tool, even for sports other than basketball.

“I’m not too worried,” Palmer said. “At this point if I care enough, work hard, and maintain a competitive mind-set the rest will come. Everyone is in the same boat, so I just have to do what I can to get better.”

Many hockey players in the north country also play on a Canadian Junior hockey team.

The difference between an AAU or club practice vs. a high school practice has led to more frustration. Public schools need to follow certain rules handed down by the state that AAU programs simply don’t have to follow.

“Club coaches are playing like crazy and they’re practicing and the high school coaches are sitting on the sideline and are like, oh my god why can’t we do this?” Whitley said. “It almost seems unfair that they’re able to do all that stuff and we’re sitting here, if I did that I’d lose my job. I can’t do that stuff and we’re seeing other travel team coaches and AAU coaches who are allowed to do it.

To a degree, Indian River is lucky. Not every school can currently use their gym for intramurals, leaving their players to find their own ways to practice — an increasingly harder task the worse the weather gets.

But even though the Warriors are afforded the chance to bond, it’s no substitute for the real games and practices that usually happen this time of the year.

“I wish that we could just play,” Adrien LaMora said.