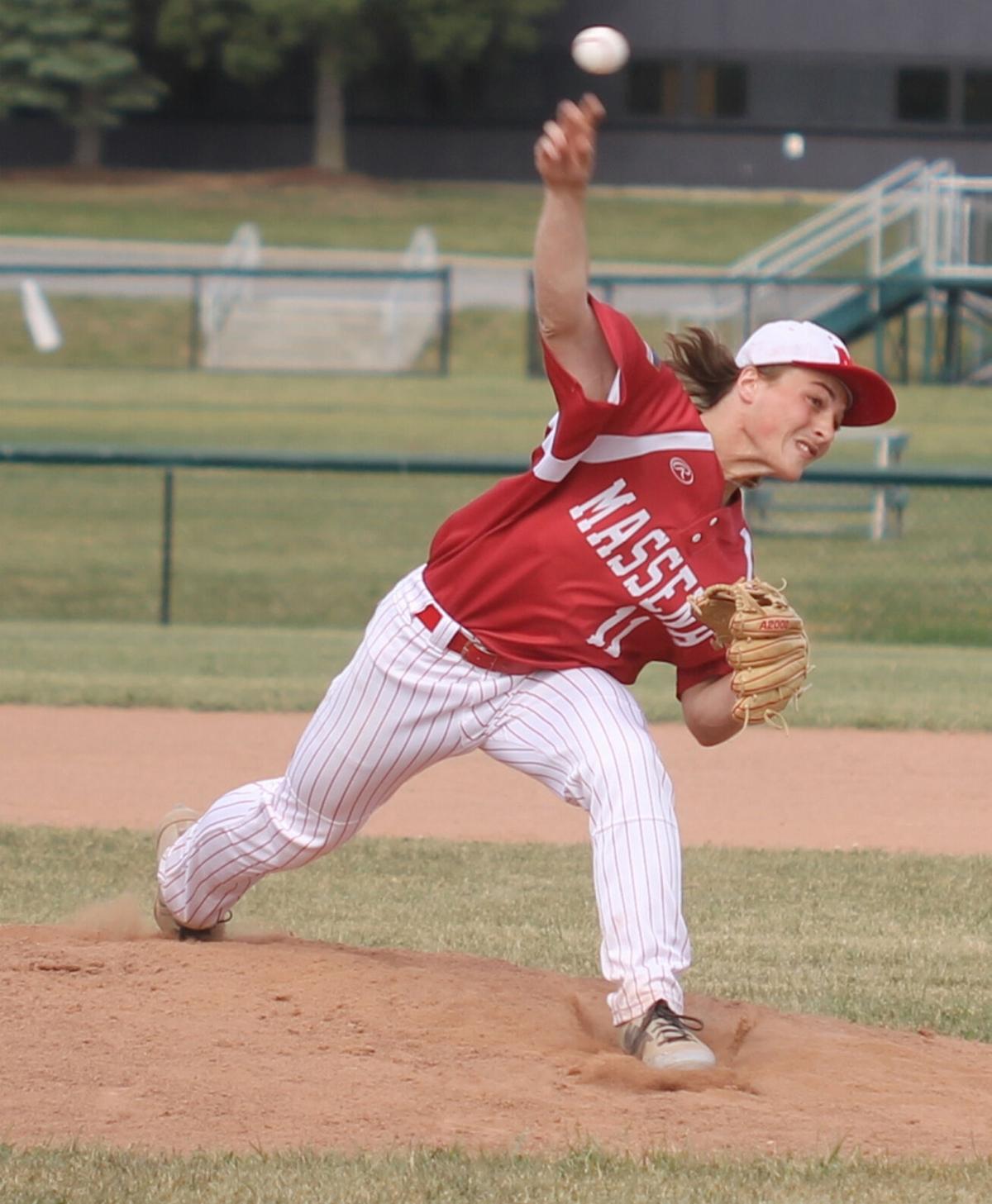 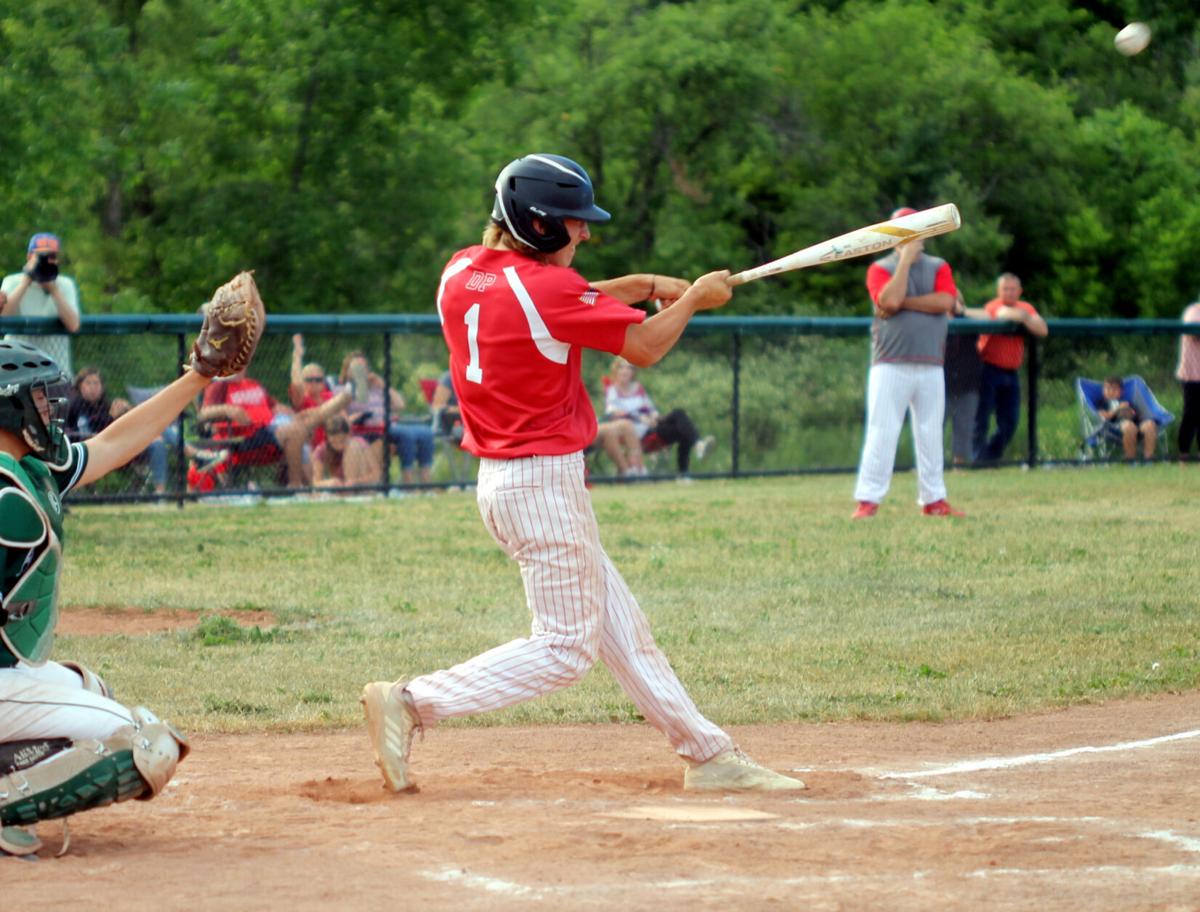 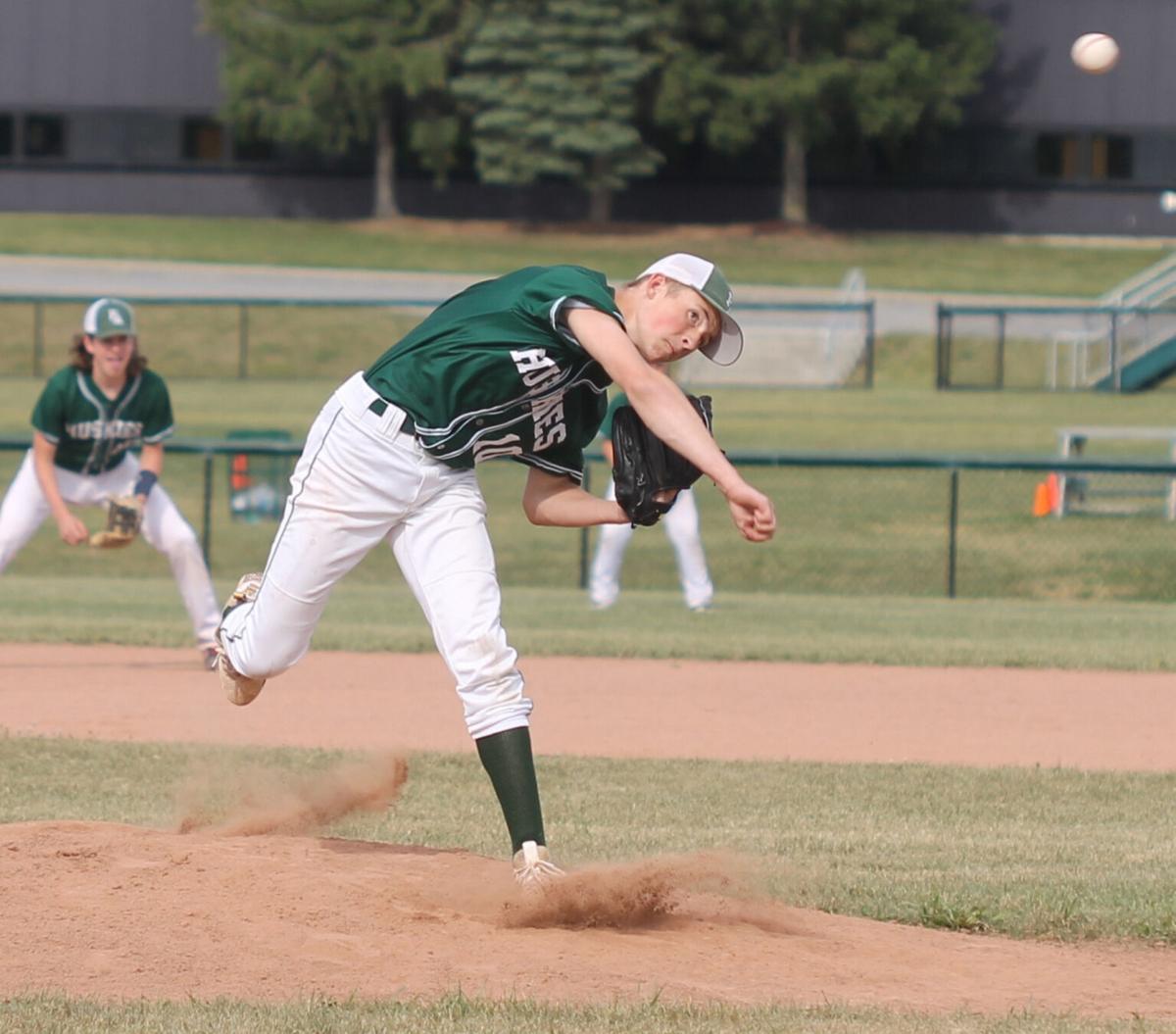 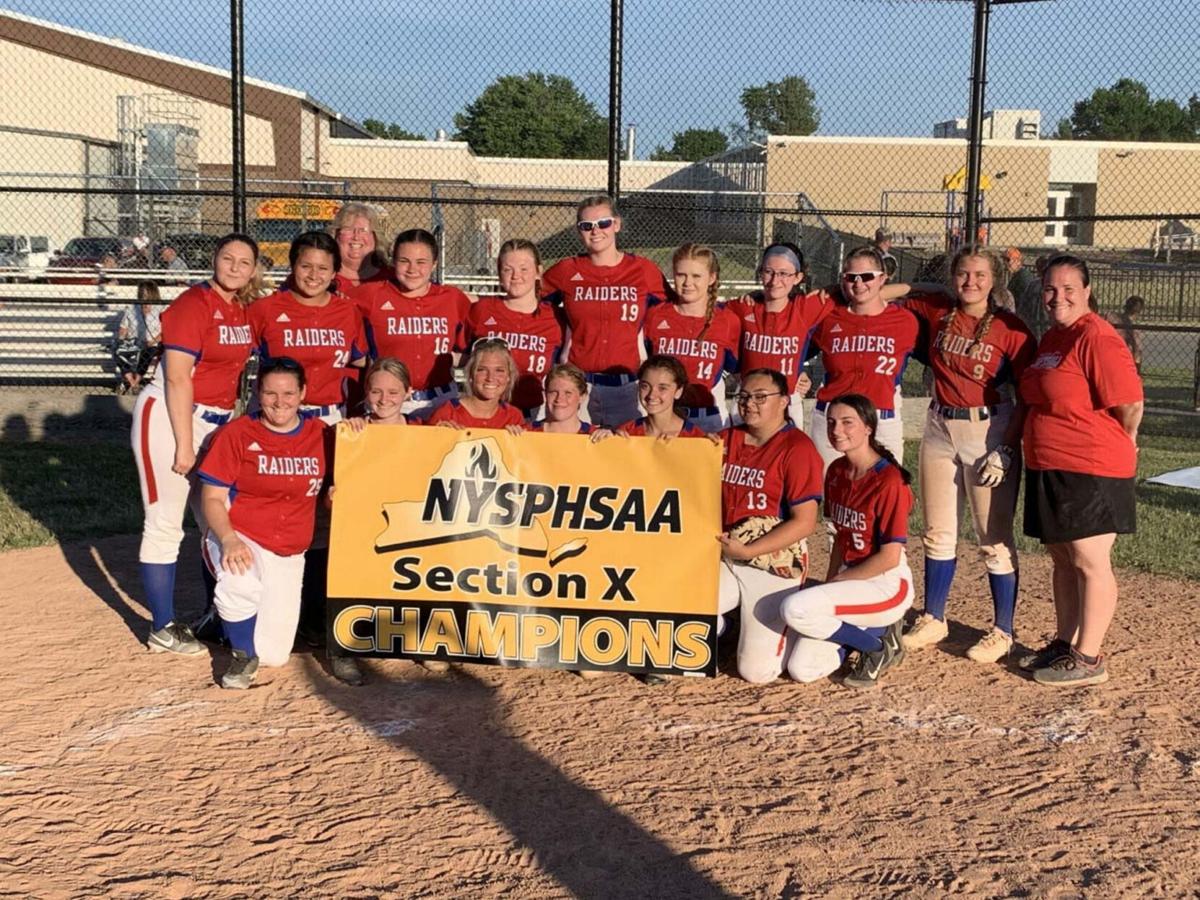 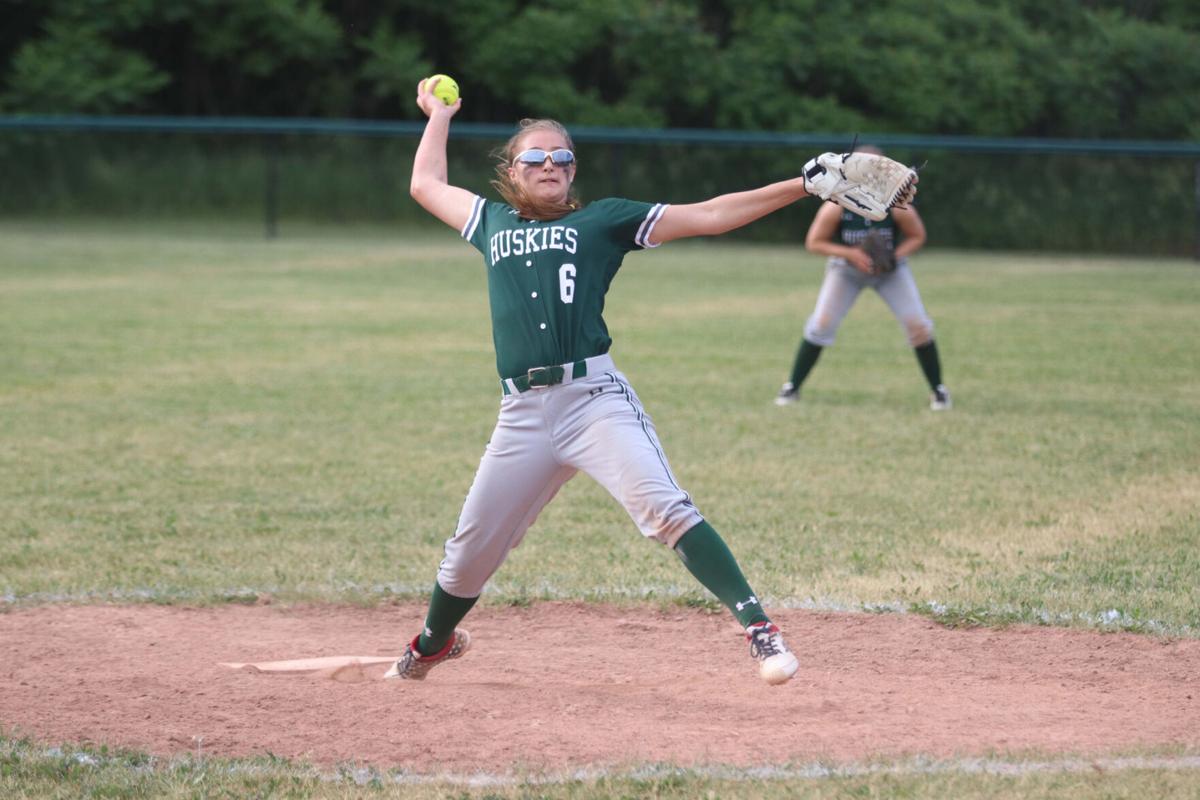 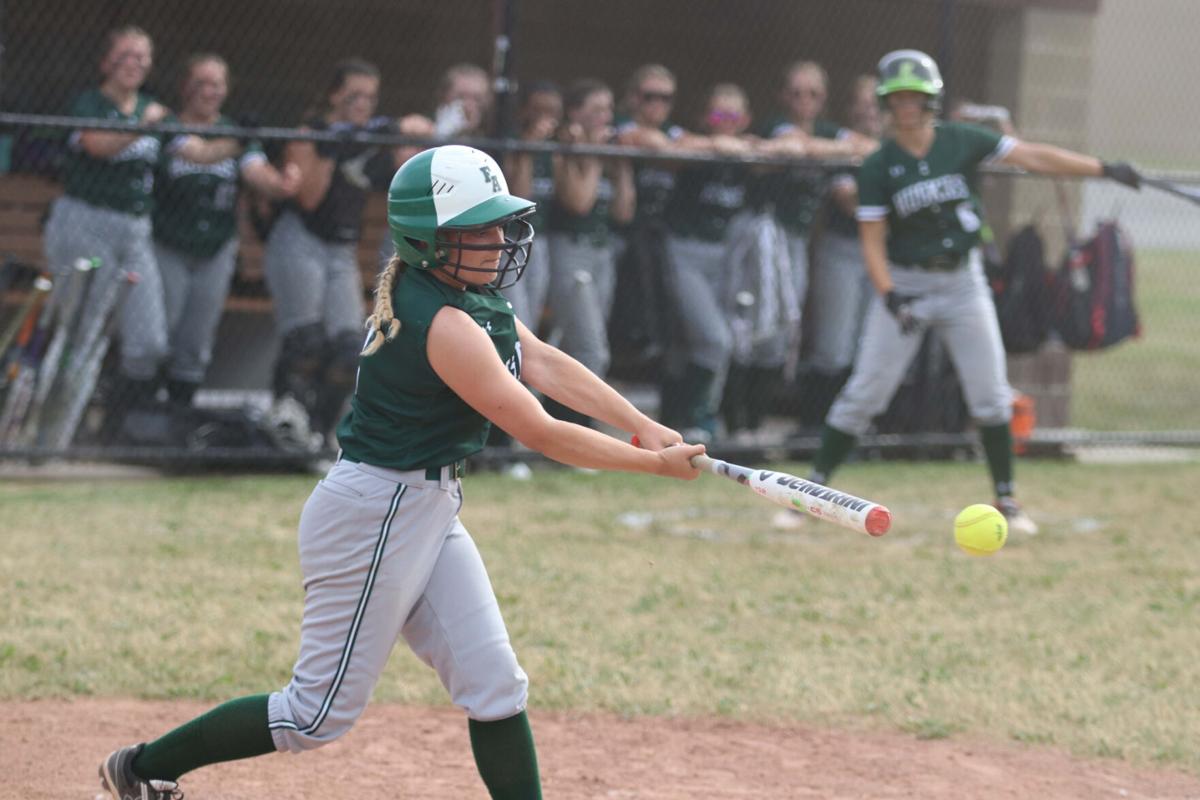 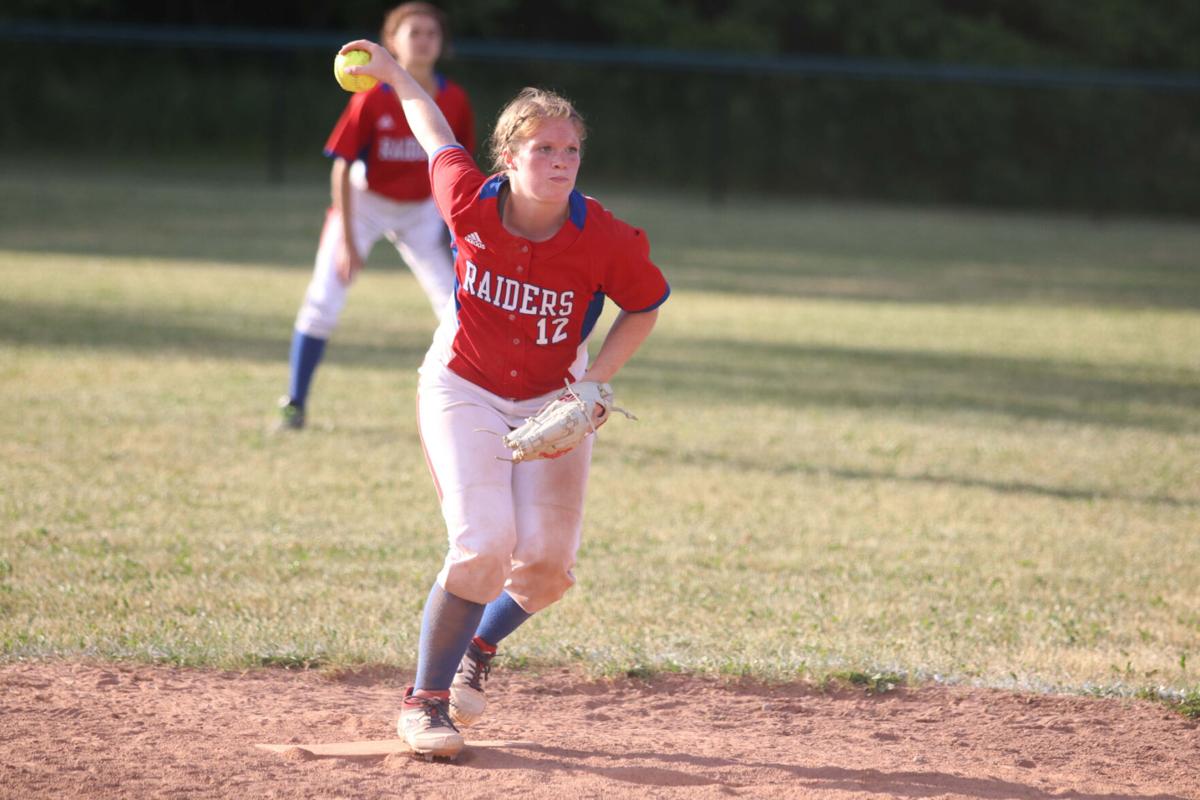 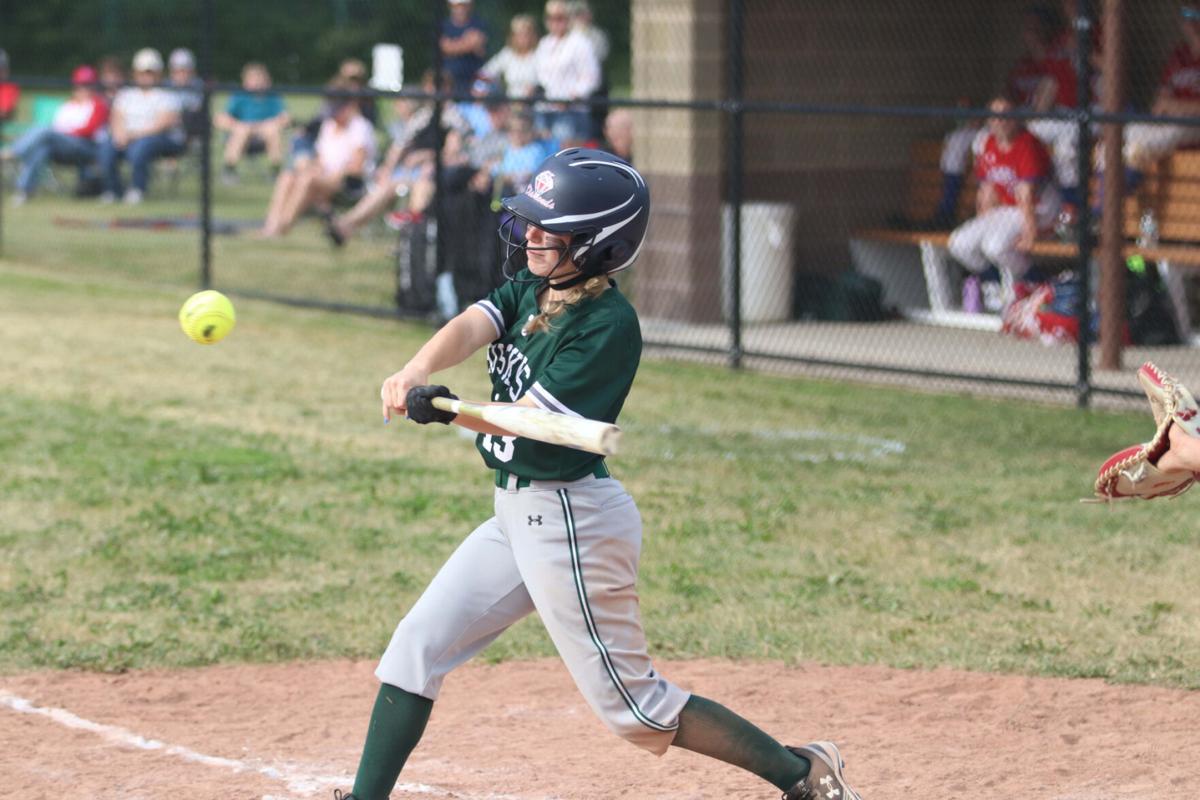 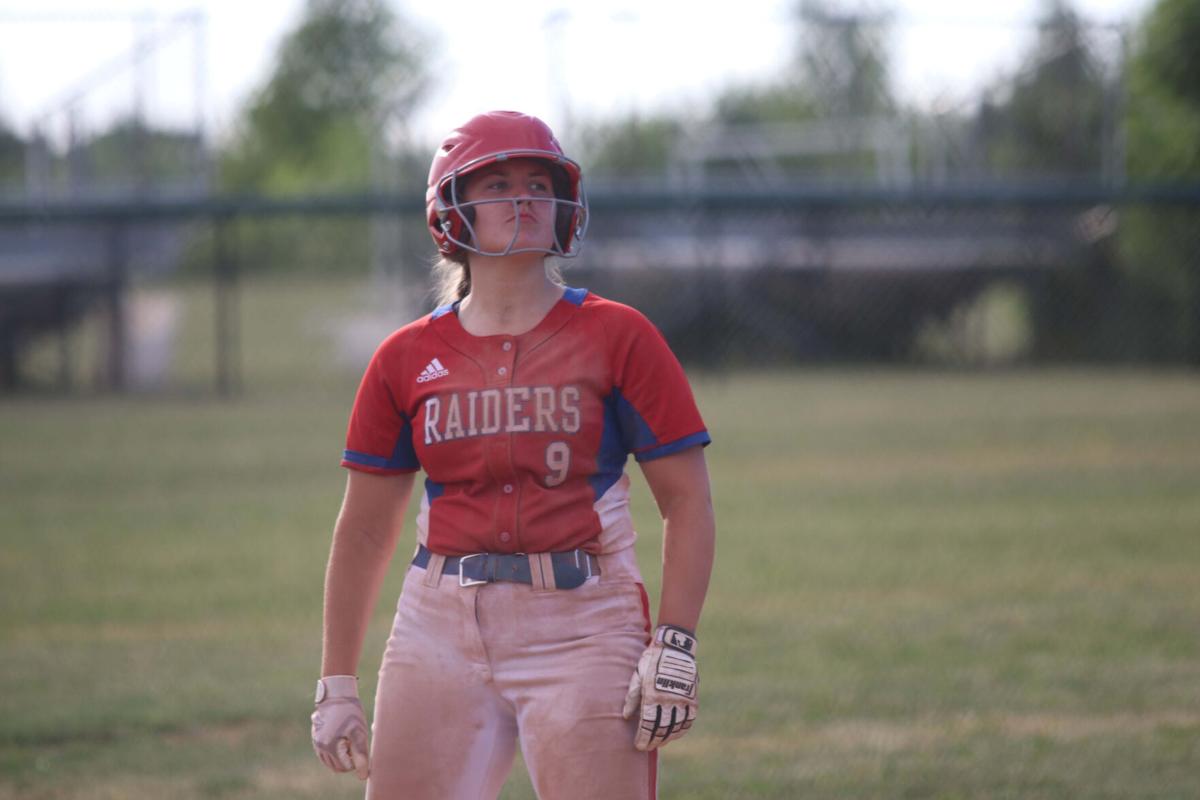 Massena’s Ainsley Cromie stands at third base after sliding in at the top of the sixth inning. Cromie hit a two RBI double to get on. Evan Wheaton/Malone Telegram 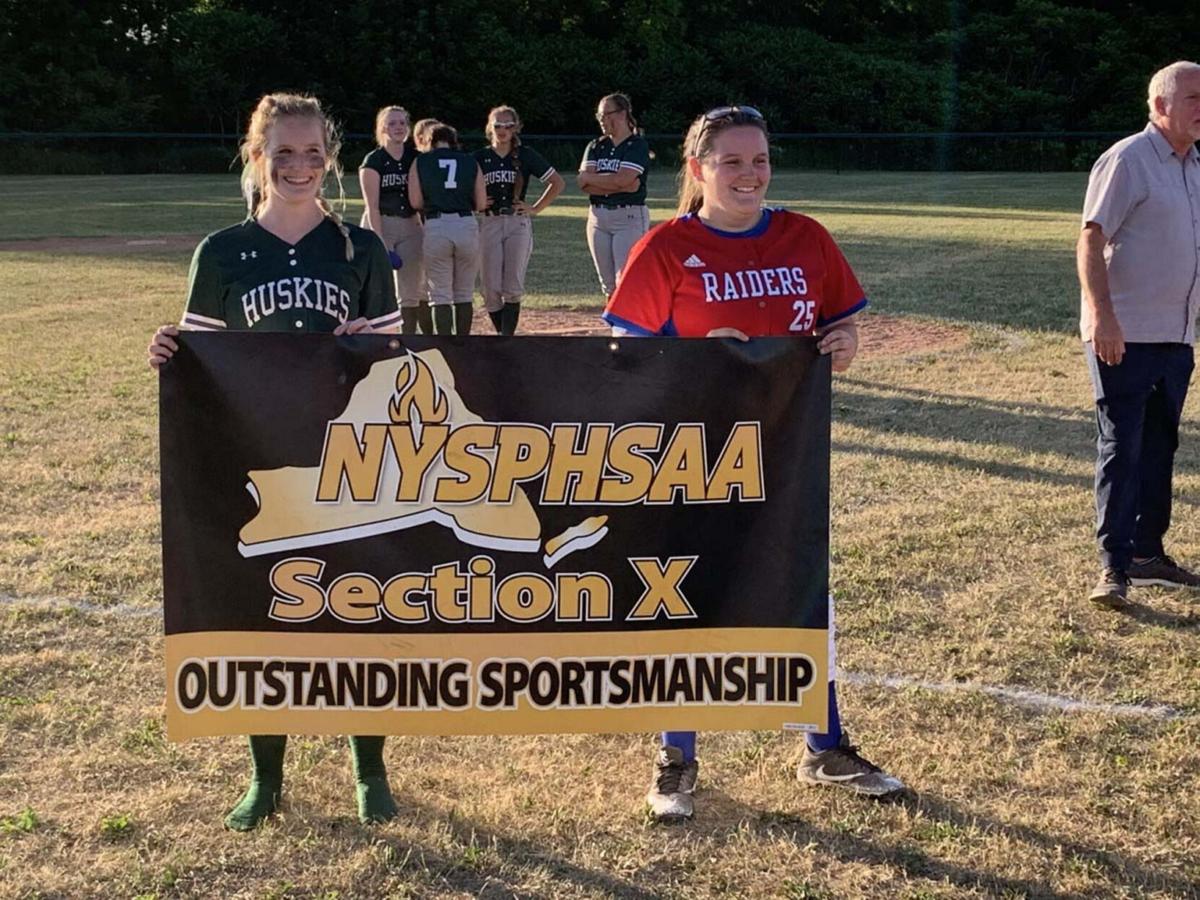 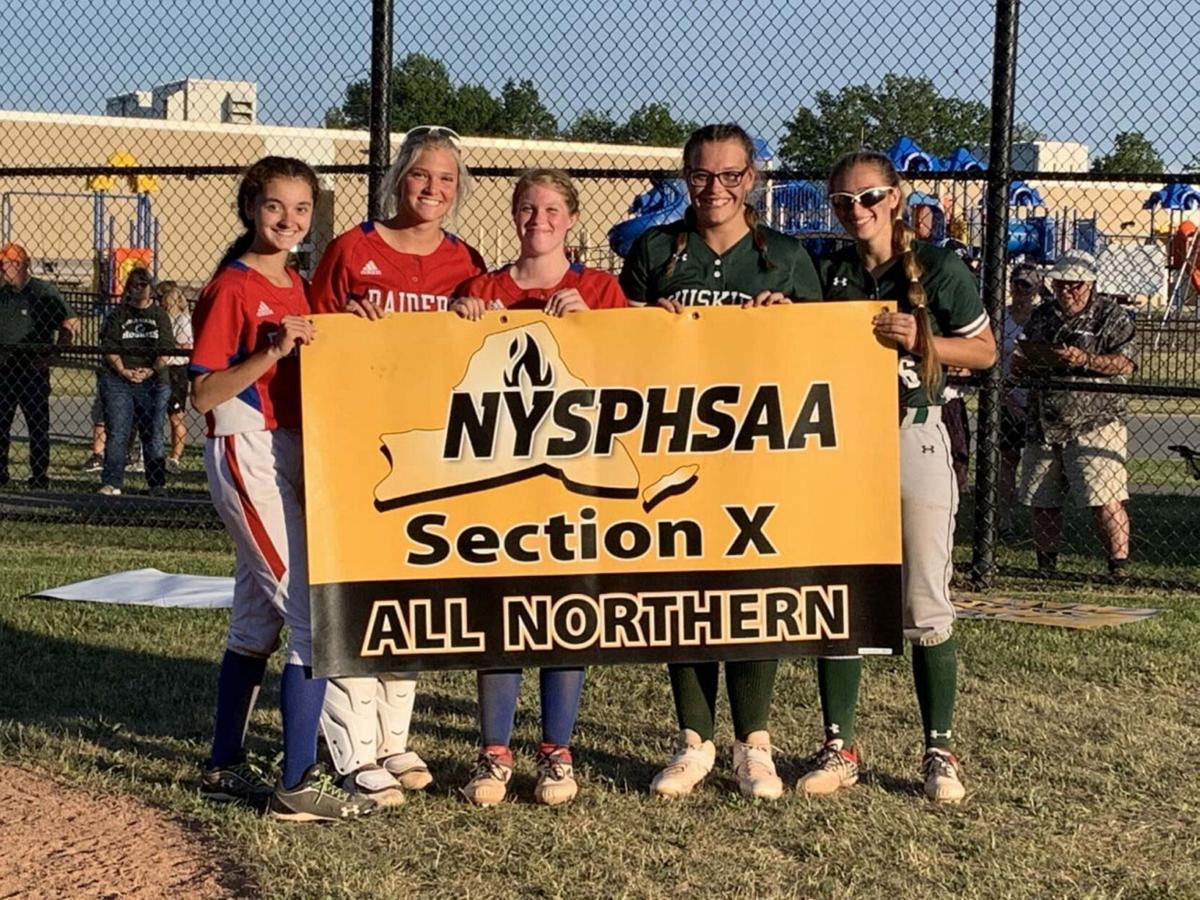 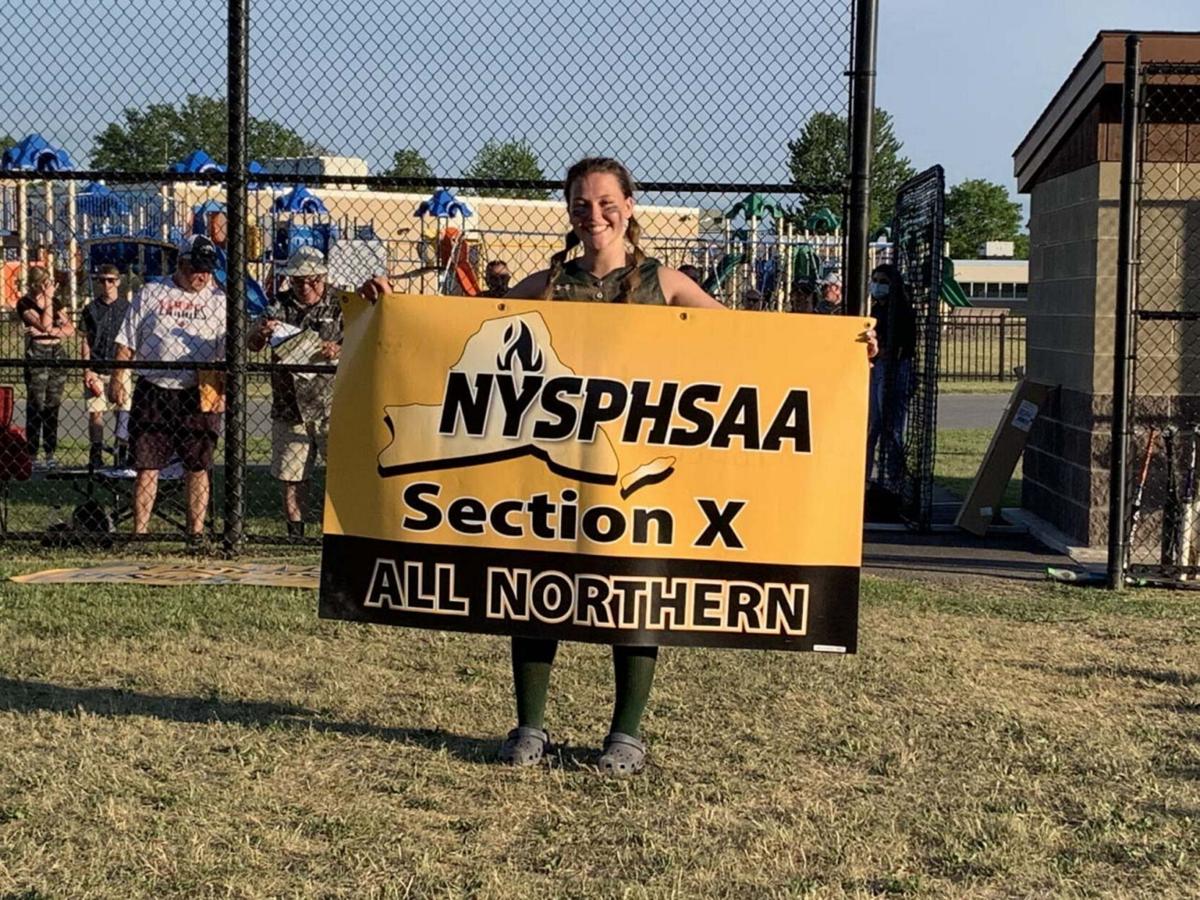 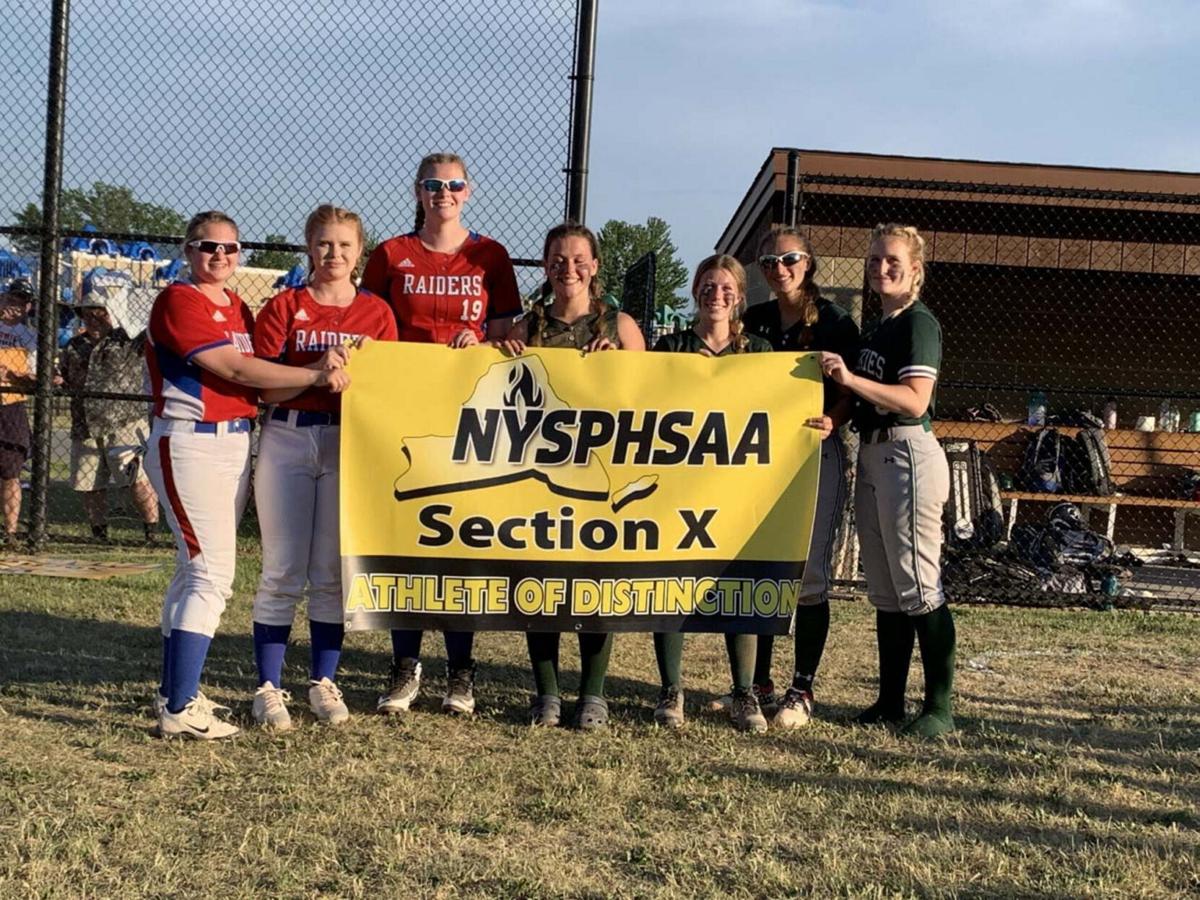 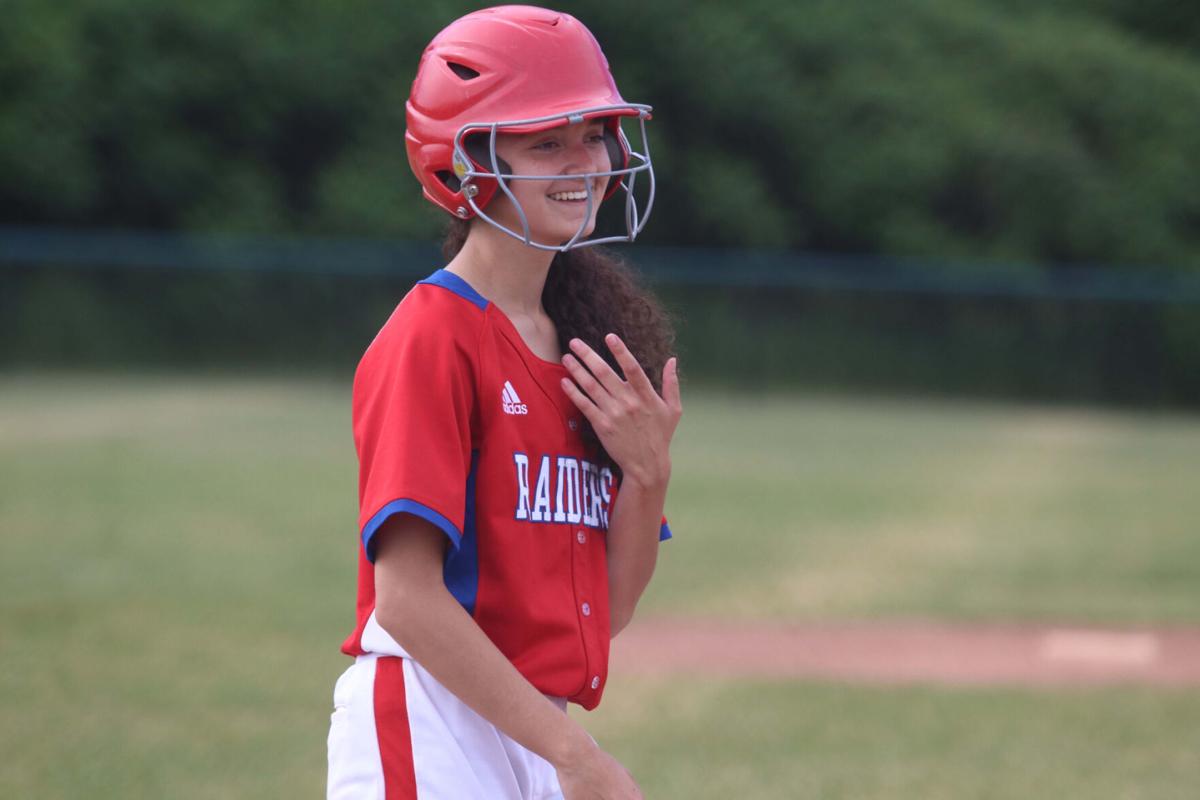 Massena’s Ainsley Cromie stands at third base after sliding in at the top of the sixth inning. Cromie hit a two RBI double to get on. Evan Wheaton/Malone Telegram

FORT COVINGTON — The combination of dominate pitching, timely hitting and steady defense has long been a winning formula for the sport of baseball.

In the Section 10 Class A title game against Malone on Friday at the Salmon River Central varsity diamond, that was still the case for Massena.

Senior David Dubray once again anchored the win for the Red Raiders, who successfully defended the championship they claimed in 2019 after being denied the chance to do so last spring due to the encroaching coronavirus pandemic.

“I had the butterflies going at the start of the game but I just tried to focus on what I needed to do,” said Dubray, who pitched Massena to the Class A title as a sophomore in 2019. “I couldn’t even imagine not playing this spring. Winning a championship is an awesome, amazing feeling.”

Senior Zack Monacelli, who flawlessly worked behind the plate through the first six innings, took over on the hill for the top of the seventh where he retired the three batters he faced. After allowing a groundball single up the middle to senior Wesley Taylor, Monacelli promptly picked off what turned out to be the final Malone baserunner then went on to strike out the next two batters to seal the win.

Freshman Jordan Perry wound up taking the hard-luck loss after giving up one run on two hits and two walks while striking out five before senior Harrison Hungerford came on to start the fifth and fell victim to a quick rash of errors that keyed a decisive six-run surge.

“We’re a very young team. Only two of our starters were seniors but we gave Massena a game today,” coach Tim Lamay said after the Huskies ended the season at 7-6. “We had the one inning where we booted the ball around a couple of times. Otherwise we were right there.”

Dubray and Perry put up matching zeroes through the first 3 1/2 innings before the Red Raiders broke through for the only run they would need in the bottom of the fourth. Following a brief dugout conference before the start of the at-bat, Monacelli and classmate Emery Deshaies drew back-to-back walks with one out. Two batters later, junior Brenin Snyder turned on a Perry offering and launched a line drive to left field that hit the ground then the top of the fence for a ground-rule double to drive in Monacelli.

“It was a fastball,” said Snyder, who made the varsity roster last spring but was denied the chance to play due to COVID-19. “We knew that with Dave pitching, all we needed to do was score. He kept us going until then. We were all pretty happy when we finally scored.”

While the longest hit ball of the game gave the Red Raiders the lead, it was one of the shortest that led to the demise of the Huskies in the bottom of the fifth. Having taken over on the hill to start the inning, Hungerford gave up a groundball to senior Nathan Eastwood that led to the first of five errors. Classmate Mason Phillips then put a bunt down the first-base line that provoked a throwing error and keyed a sequence of miscues that allowed both Eastwood and Phillips to come score.

Senior Thomas McGregor and junior Connor Terry then drew back-to-back walks and advanced on a single by Monacelli that loaded the bases. Deshaies and Dubray followed by hitting balls that led to errors and allowed McGregor to score. Snyder and Ethan Firnstein eventually drove in the final Massena runs on a fielder’s choice and groundball out.

“Before we went to bat in the fourth inning, we talked about being more disciplined at the plate and not chasing pitches,” Massena coach Greg Paquin said. “The Perry kid was going a good job of keeping us off-balance and mixing his pitches.”

The Red Raiders (13-2) will now advance to the first overall tournament held in Section 10 since before the start of the NYSPHSAA playoffs in 1983. The overall semifinals are slated for Tuesday and the title game Saturday.

Malone faced a tall task in the bottom of the seventh inning against Massena during the Class A softball championship at Fort Covington.

Down by six runs with the title on the line, things looked pretty grim for the Huskies. It seemed like the game was over.

Madison Klepfer took a walk on the first at-bat of the frame, and a bunt advanced her to third — one out. Senior pitcher Ryleigh McCauley stepped up to the plate next and promptly smacked a double to center field to plate two runs and cut the deficit to five.

Mckenzie Lane doubled in McCaulay, Alanna Dumas doubled in Lane and Dumas made a sliding dive home to bring Malone within two runs. The late effort ended there, and the Red Raiders (12-3) won the Class A title.

“We worked hard and it is what it is, how it turned out,” Dumas said.

During the Section 10 awards presentation following the game, Dumas was the lone player to win Second-Team All-NAC.

The title game featured a pitching battle that let the stat line speak for itself. Through five innings, McCauley and Reed both had eight strikeouts thrown and four walks allowed. McCauley gave up 10 hits, while Reed let up three.

“I know (Reed is) a very good pitcher and she’s one of, if not my best competition, and I wish her the best,” McCauley said. “She did great. I just wanted to do my personal best because in my head, I knew it could be my last game and it was unfortunately.”

Reed threw three strikeouts in the second inning, while McCauley struck out three batters in the third immediately after.

It was a dance on the mound.

The Red Raiders will now move on to the overall Section 10 softball semifinals.