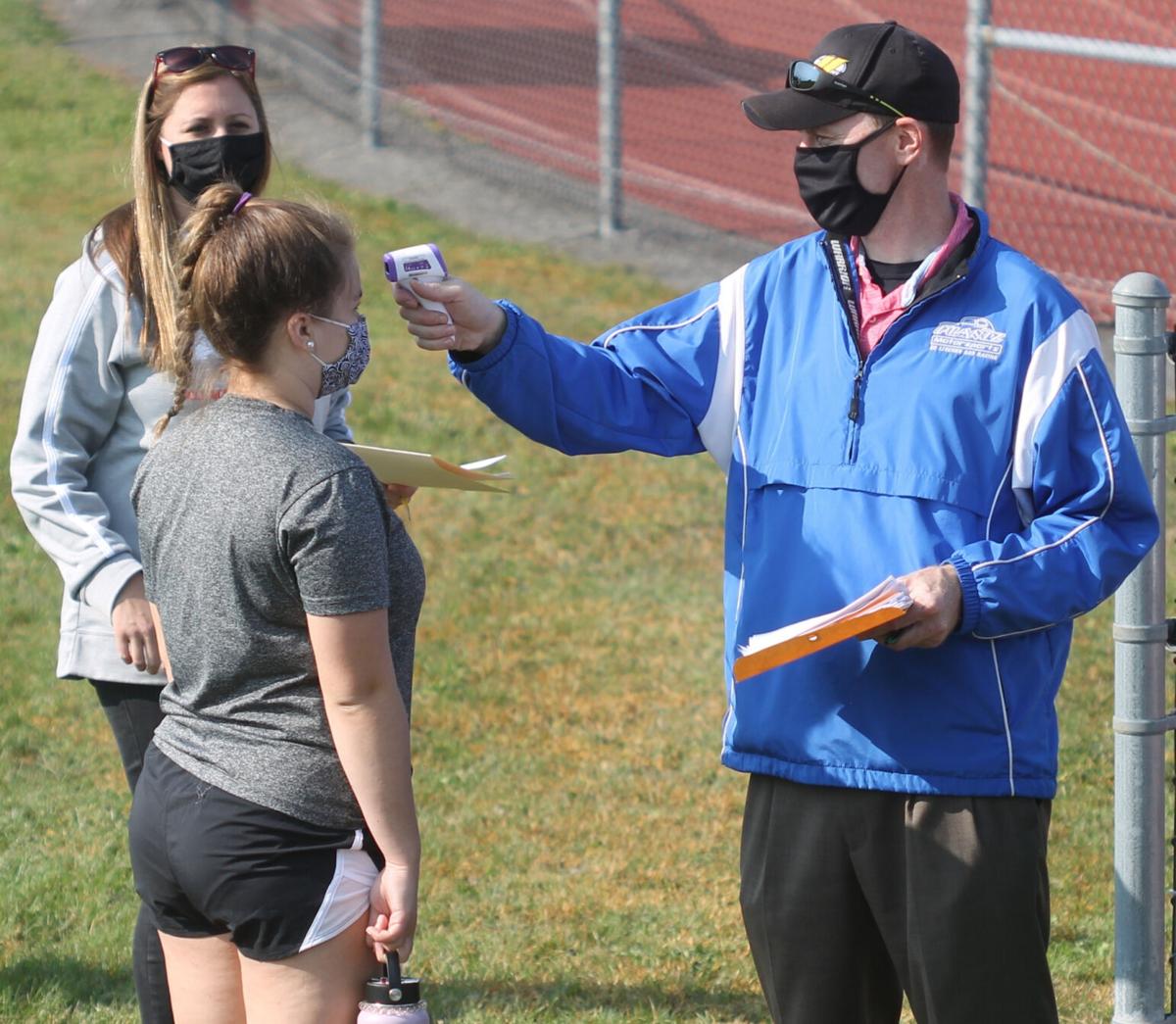 Athletic Director Nate Plantz takes the temperature of a Norwood-Norfolk Central varsity girls soccer player before the start of the first practice for the 2020 season on Monday as coach Jessica Long looks on. Alain St. Pierre/CO

Members of the Norwood-Norfolk Central varsity boys soccer team maintain their distance from each other during the first practice of the 2020 season on Monday. Alain St. Pierre/CO 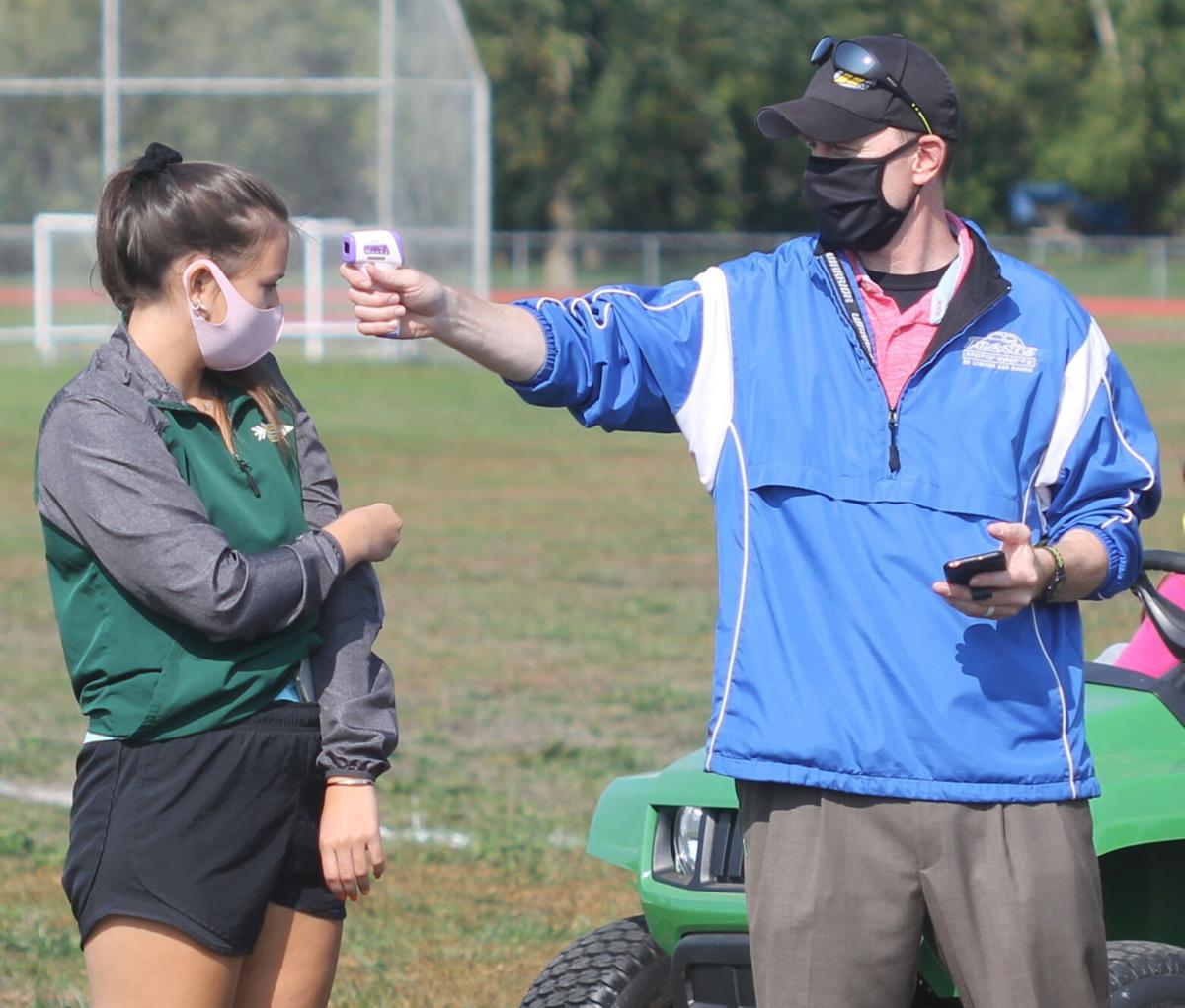 Senior Kiera Fetter has her temperature checked by Athletic Director Nate Plantz before the start of the first practice for the Norwood-Norfolk Central varsity cross country on Monday. Alain St. Pierre/CO 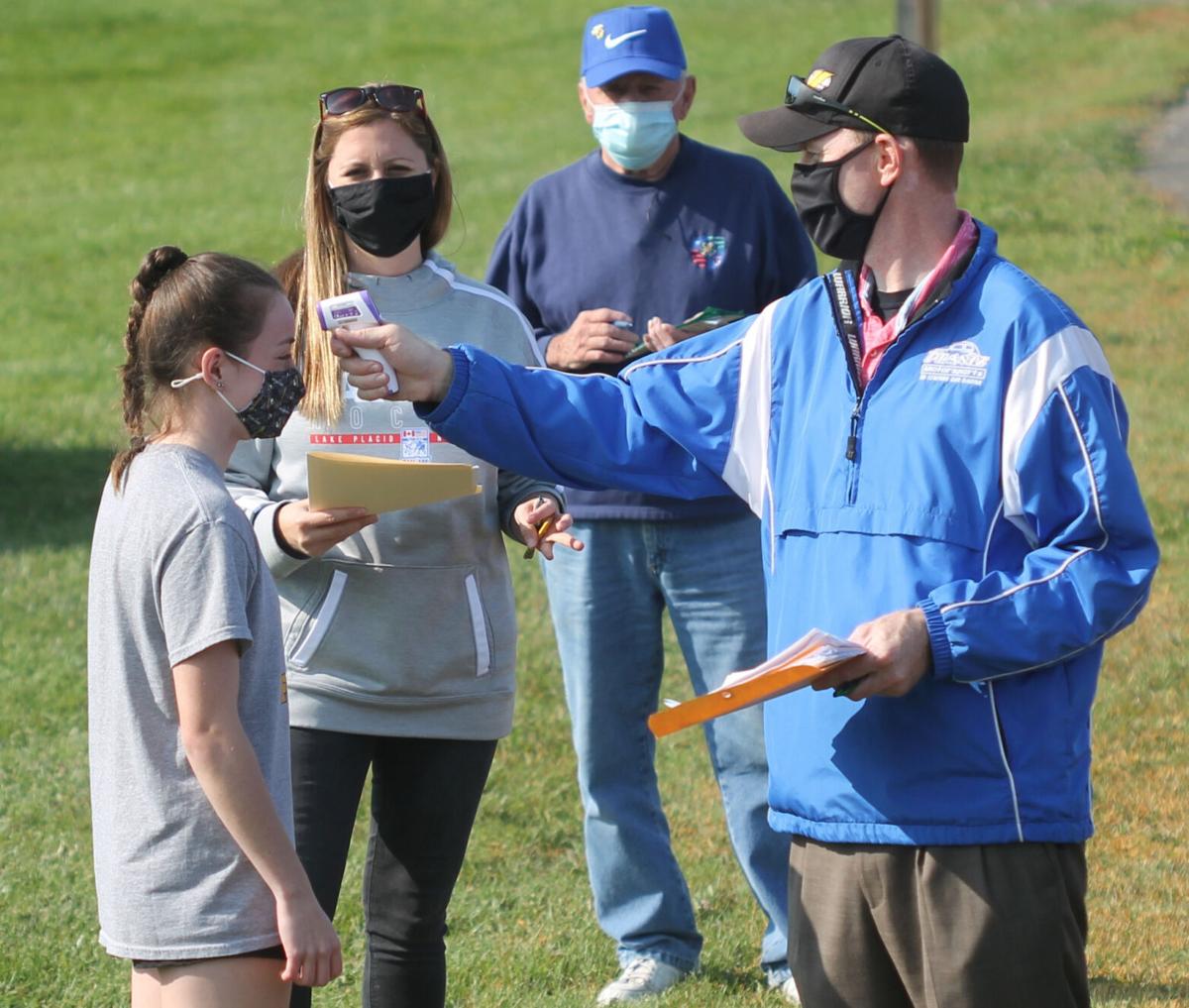 Athletic Director Nate Plantz takes the temperature of a Norwood-Norfolk Central varsity girls soccer player before the start of the first practice for the 2020 season on Monday as coach Jessica Long and longtime team supporter Jim Beldock look on. Alain St. Pierre/CO

Athletic Director Nate Plantz takes the temperature of a Norwood-Norfolk Central varsity girls soccer player before the start of the first practice for the 2020 season on Monday as coach Jessica Long looks on. Alain St. Pierre/CO

Members of the Norwood-Norfolk Central varsity boys soccer team maintain their distance from each other during the first practice of the 2020 season on Monday. Alain St. Pierre/CO

Senior Kiera Fetter has her temperature checked by Athletic Director Nate Plantz before the start of the first practice for the Norwood-Norfolk Central varsity cross country on Monday. Alain St. Pierre/CO

Athletic Director Nate Plantz takes the temperature of a Norwood-Norfolk Central varsity girls soccer player before the start of the first practice for the 2020 season on Monday as coach Jessica Long and longtime team supporter Jim Beldock look on. Alain St. Pierre/CO

On Monday, the varsity soccer and cross country teams at Norwood-Norfolk Central got a chance to begin following them.

“The way things were going, I wasn’t sure if (they) were going to be allowed to play at all. I’d have to say, I was surprised when the state gave its permission but, it was exciting to be out there today,” said varsity girls soccer coach Jessica Long. “It’s been a long six months for everyone and having practice was a good way of giving the players a little more normalcy.”

“This was the first day where we had all the players together and we had to follow all the new protocols. The biggest things we had to deal with were wearing masks and social distancing. Something we’ve already talked about a lot is being responsible and being respectful of the situation that we’re in and how important it is to make sure we keep following the guidelines,” she added. “Today was a good start.”

Before practice on Monday, each of the teams was greeted by Athletic Director Nate Plantz, who reinforced the need for all student-athletes to pay strict attention to the current health and safety rules. Plantz then used an infrared, non-contact forehead thermometer to personally check the temperature of every student-athlete who turned out for the first day of organized high school sports practice since Governor Andrew Cuomo ordered the closure of all schools in mid-March in response to the growing worldwide coronavirus threat.

NYSPHAA announced the cancellation of all its fall championship tournaments and events in July. In late August, the state gave permission to begin practicing for the traditional fall sports seasons on September 21 but that it would be up to each section to decide whether or not to follow through on having scholastic athletics. State guidelines listed sports from low risk to high risk based on the ability to maintain a safe practice and playing environment at all times.

Three of the five fall sports played in Section 10 — soccer, cross country and girls swimming — were considered low risk and would be allowed to start competing in games and meets after 10 days of practices. The other two, football and girls volleyball, were considered high risk by state standards and would have been permitted to start practicing. A decision on when or if high risk sports would be allowed to play games was due to come by Oct. 19, but on Sept. 11, the state announced the creation of “Fall Sports Season II” for football and girls volleyball. It would run from March 1 to mid-April and not conflict with the end of the winter sports season nor the start of spring sports.

Last week, the 24 school districts comprising Section 10 all chose to have athletics. Due to non-COVID related issues with the pools in several school districts, the section has opted to move girls swimming to the second fall campaign.

“It’s exciting that we’re even able to have a season. We’ve made it very clear that we all have an extra sense of responsibility in that our actions could directly impact people outside of our district and not just our team,” said varsity boys soccer coach Natalie Lucas. “We’ve stressed to the players how it’s a privilege just to be playing soccer this year. A lot of schools in sections right next to us aren’t playing any sports at all.”

“For us to be able to be out there on the field as a team for the first time is a big deal and we’ve made it clear that anyone who is not willing to comply with the rules is going to be benched,” she added.

Ironically, due to social distancing concerns on the sideline during games, benches are going to be replaced by individual chairs and players will be required to remain seated in their designated areas.

“Wouldn’t you know, our numbers are up a little this year. We have around 23 players so we’re going to need a lot chairs,” noted Lucas.

“With the players wearing masks at all time, some are having difficulty breathing. They’re allowed to take breaks and lower their masks as long as they move well, well, well, away from other players,” she added.

Among those players at Monday’s practice was first-year senior Bobby Voss. A three-sport standout as a sophomore, Voss excelled on the football field for Potsdam Central in the fall before donning NNCS green and gold on the hockey rink and baseball diamond. Last season, he helped the Potsdam football program earn the first state tournament win in its history. He then made lead contributions to the NNCS hockey team that successfully defended the Northern Athletic Conference Division II regular season championship and was set to be a key part of an NNCS baseball team stacked with seniors looking to defend their NAC East Division and Section 10 Class C titles.

With the changes in schedules announced by NYSPHSAA, Voss is hoping to go from being a short-changed two-sport junior to being an opportunistic four-sport senior.

“This is the first time that I haven’t had a sport to play in the fall and I didn’t want to end up doing nothing,” said Voss, who played youth soccer before getting involved with Potsdam Central football. “I’ve been working out and lifting weights on my own over the summer. I’m looking to play hockey again and thought this would be a good way to get back in shape. I’m not use to all the long distance runs and it’s not fun wearing a mask. It restricts my breathing a little and it gets sweaty after a while so I have an extra one in my bag.”

“It’s pretty crucial that we follow the rules. If we don’t, we could lose other sports,” he added. “I’m enjoying soccer but it won’t replace losing baseball season. That’s something that I’ll never get back.”

For their part, both soccer coaches ran opening day drills that allowed players to consistently maintain social distancing. As per the state’s COVID-19 guidelines, players were split into small groups with assigned partners and will continuing doing various non-contact drills with the same teammates throughout the season.

“We had the players establish what the state calls ‘cohorts’ and they’ll practice together as a group all year. That way, if someone winds up being infected, fewer players would be at risk,” said Lucas. “One of the biggest challenges that I can see already is going to be getting the whole team to work together after being kept apart.”

For cross country coach Kent Fetter, consistently wearing masks and keeping a safe distance between runners during practices and eventually during meets against other teams shouldn’t be as problematic as the Flyers look to regain the form that produced undefeated NAC and Section 10 championship seasons for both squads last fall.

“We’re such a low risk sport to begin with. Except for starts, there’s very little close contact between groups of runners once a race gets going. There’s no equipment being shared and kids can pretty much train on their own,” he said. “Still, we all want to be doing the right things and be as safe as possible. The big thing right now is the mask and how it affects breathing. We’re still waiting for more details on when runners are supposed to wear them during meets. For now, I know they all have to wear them at the start and when they finish. I’m still not sure what runners can do with their masks once they are out on the course.”

“With what happened with spring sports, we know we were fortunate to even have a season last year,” he added. “COVID has really changed the whole perception that kids have about school. I hear them saying all the time, ‘Oh, yeah, I missed having school,’ and they don’t want to see it close again.”