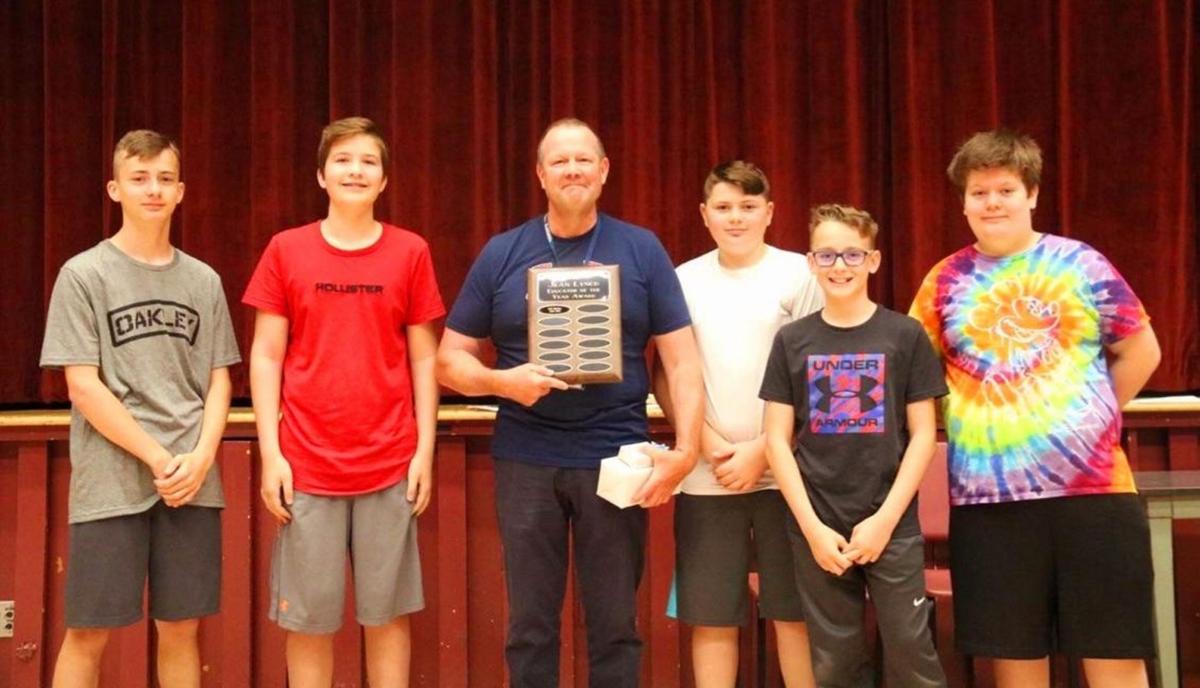 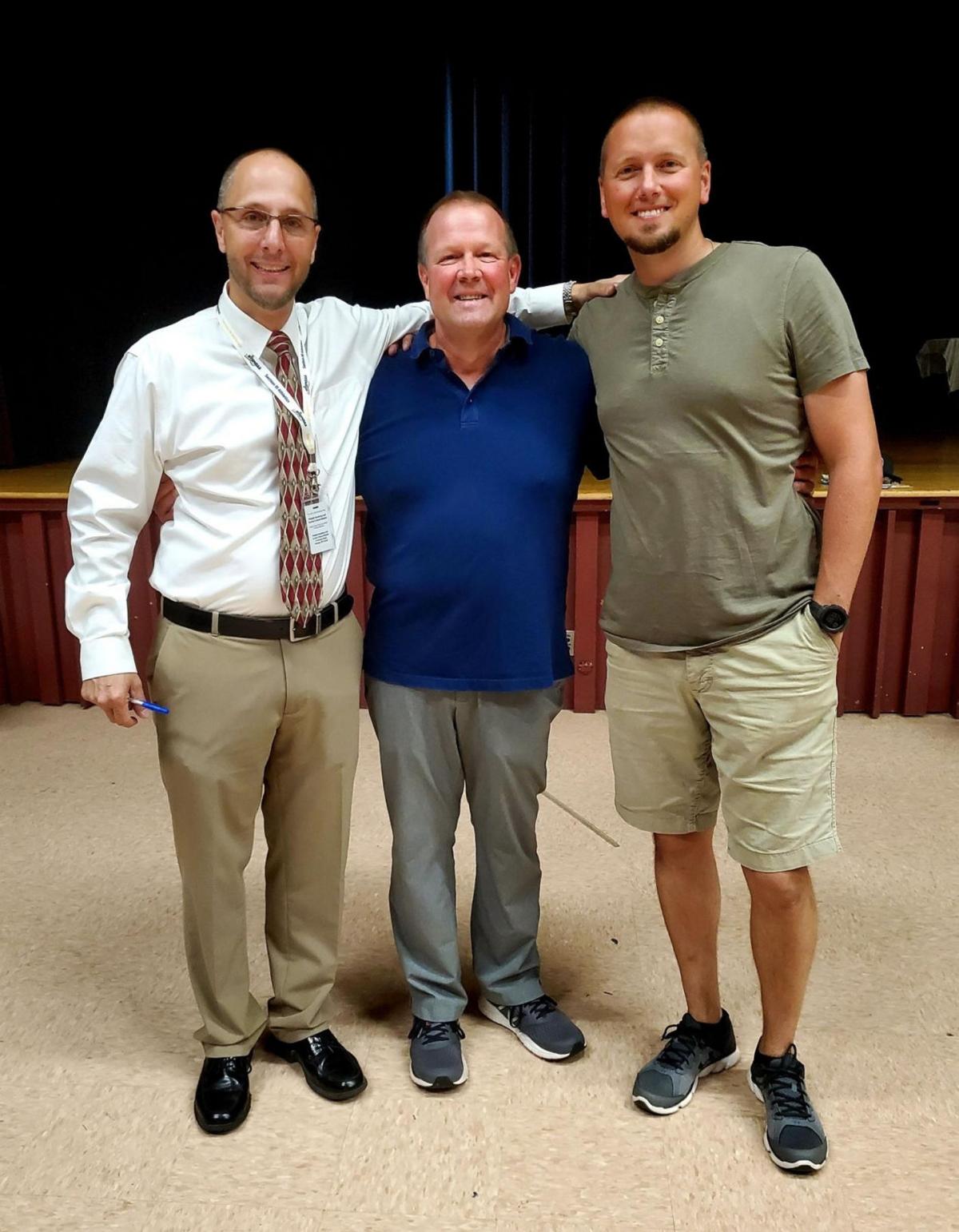 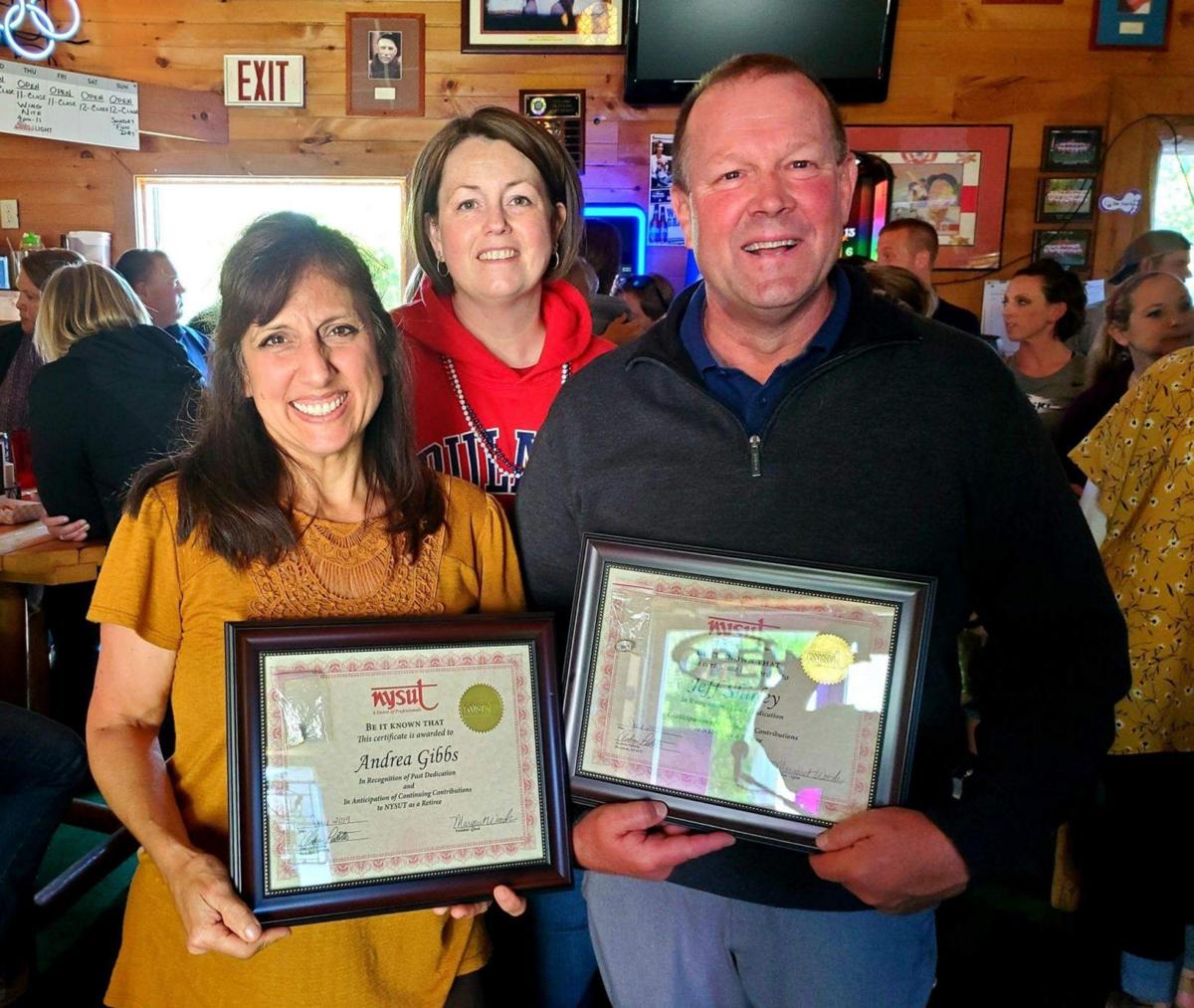 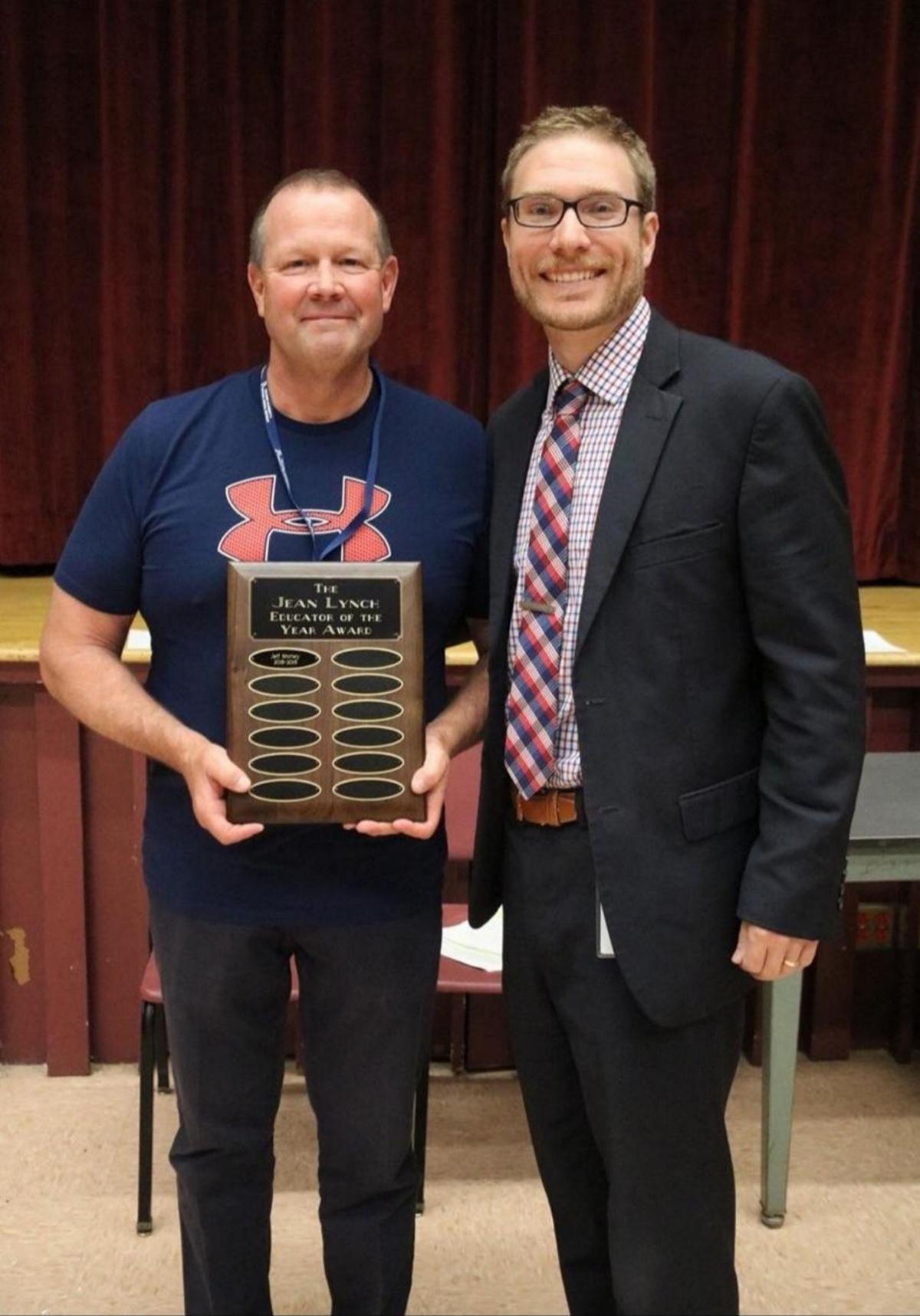 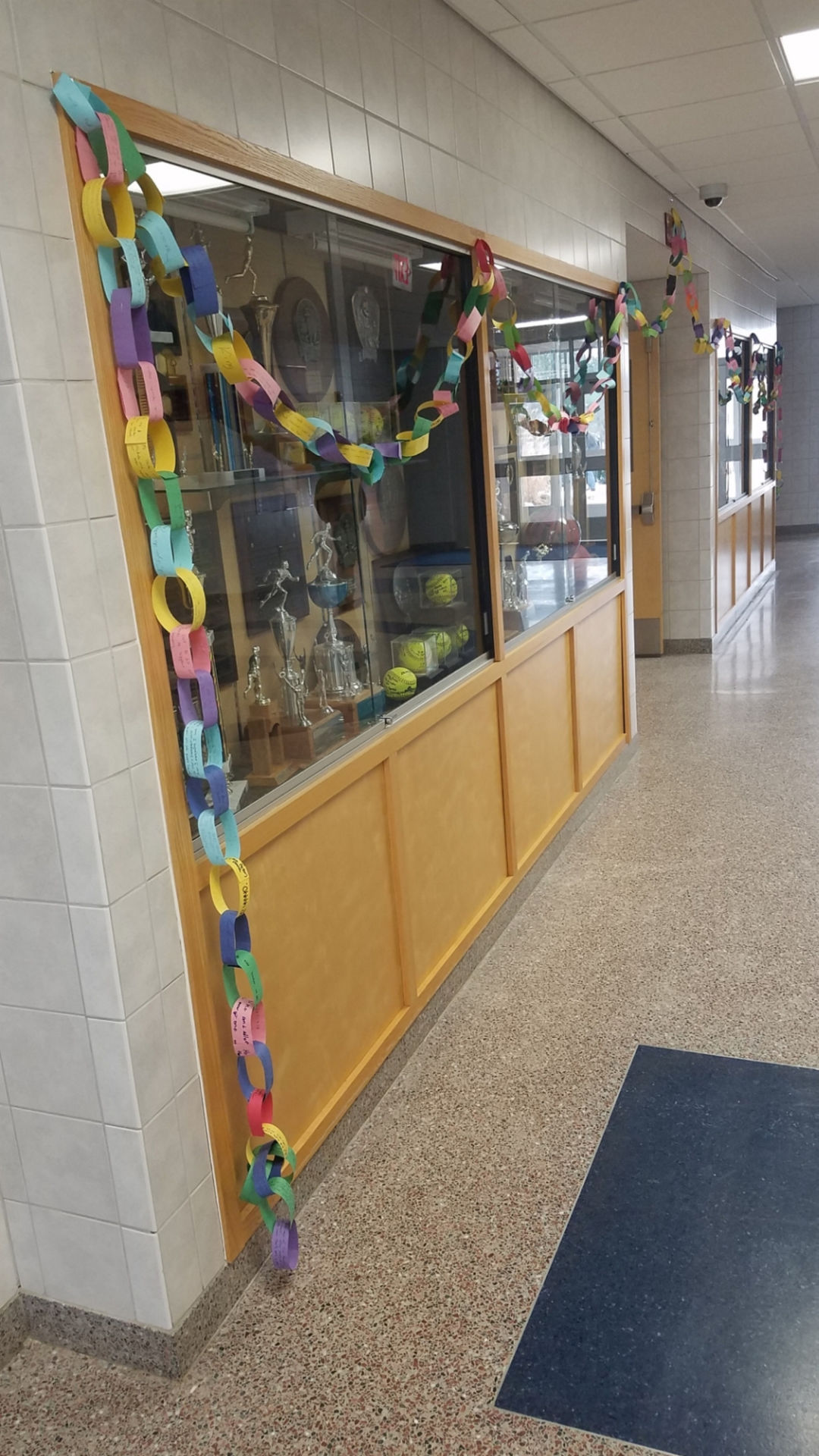 Pulaski High/Middle School students created a memory chain that hangs above the trophy cases along a doorway near the gym at Pulaski High School in tribute to former athletic and physical education teacher, Jeff Shirley. Students shared their favorite memories and thoughts on Jeff Shirley. Josh St. Croix/Johnson Newspapers

Pulaski High/Middle School students created a memory chain that hangs above the trophy cases along a doorway near the gym at Pulaski High School in tribute to former athletic and physical education teacher, Jeff Shirley. Students shared their favorite memories and thoughts on Jeff Shirley. Josh St. Croix/Johnson Newspapers

PULASKI — The memory chain that stretches across a long hallway near the Pulaski High School gym can only begin to represent the career impact made by Jeff Shirley.

Shirley died Feb. 12 at his home in Lacona at age 56 — leaving behind a legacy of unwavering kindness and steadfast dedication to area students, athletes, coaches, teachers, and administrators who worked closely with the beloved former athletic director and physical education teacher.

Shirley retired last June after holding both positions in the Pulaski district for 15 years. He previously worked for three years as an assistant principal at Central Square and 15 years prior as a coach and physical education teacher for his alma mater, Sandy Creek.

“He already is missed and has been missed, and we’re going to continue to miss him in a lot of ways,” said Jill Truax, who has worked as a teacher and coach in the Pulaski district for nearly 30 years.

“I think the kids and the staff feel strongly about doing things to keep his memory alive because I think he exemplified what Pulaski stands for and what we want it to stand for, as far as being kind, caring, compassionate, dependable and loyal, all the traits that he stood for. He played a big part in creating the kind of family atmosphere that we have here.”

Shirley was a lifelong Lacona resident and graduated from Sandy Creek High School in 1981 where he was a three-sport athlete — excelling in wrestling, football, and baseball. His wife, Carolyn, worked as a middle school principal in the district and their three sons — Troy, Matthew, and John — each attended school and played sports for Sandy Creek.

Truax said that Pulaski teachers informed students of Shirley’s passing during first period the day after it occurred, and counselors were present throughout the school day. District principal Michael Bateson called for a moment of silence and spoke in tribute of Shirley on morning announcements later that week.

“It was heartbreaking, and you try to put it into perspective and reflect on things, and I know he did a lot of good things for a lot of people,” said Sandy Creek athletic director Mike Stevens, a former colleague, schoolmate, and longtime friend to Shirley. “I hope people know that and that they continue living and enjoying the things that he would want them to do.”

Throughout the past month, Pulaski athletes paid their respects to Shirley in various ways. The final boys and girls basketball games of the season called for moments of silence before tipoff. The girls team wore a black stripe on the shoulder of their jersey, and some players wrote his name or initials on their sneakers and other gear.

Students also put together a memory chain, each writing a favorite moment or characteristic of Shirley onto strips of paper that were linked together and placed in the hallway near the gym that he spent countless hours guiding their respective endeavors.

“He left his legacy here and his legacy was that he really supported all the kids,” said Pulaski senior Cara Reynolds, who plays volleyball, softball, and tennis for the Blue Devils. “You saw him at every sporting event and he would stay for the whole game and support everybody. He would always start a conversation with us or be like: ‘Hey, great game.’ Stuff like that, he just really loved the kids and it showed through his work.”

Shirley’s overall passion for athletics was apparent, but he held a special fondness for wrestling. Shirley coached the sport along with football prior to taking on his administrative role, and worked as a modified volunteer assistant coach during the past season.

Shirley was part of a collegiate national championship wrestling team at SUNY Delhi and enjoyed passing on the lessons he learned from his Comets high school coach, Roy Hunt, to athletes at Sandy Creek and Pulaski.

“I really liked having him as a wrestling coach,” said Austin Cusson, an eighth-grader on the Blue Devils modified wrestling team. “He would teach us new moves but also old moves with new ways to do them better and more efficient. His favorite moves to teach were the hip heist and the double-leg takedowns. Every time I do the hip heist, I think of Mr. Shirley.”

The modified wrestling team was set to compete in a dual meet tournament at Hannibal less than a week after Shirley died and was given the option to withdraw from the event.

Andrew Cusson — Austin’s twin brother and a leader on the modified wrestling team — said that the squad chose to wrestle and dedicate their matches to Shirley. Cusson and his teammates dressed up to attend the meet and pinned photos of Shirley to their chest. They also placed a portrait of their adored coach in the middle of their pre-match huddle and spoke of their inspiration.

“I wished everybody luck and said to fight for Mr. Shirley and don’t give up, then we all started pounding the mat and chanted: ‘Shirley,’ as loud as we could,’” Andrew Cusson said.

Upon his retirement last June, Shirley was selected as the district’s Middle School Educator of the Year, an honor voted on by students.

“Everybody here loved him, everything that he did,” Andrew Cusson said. “I remember that whole auditorium was so loud. I remember he broke down in happy tears (at the award presentation).”

Shirley was also remembered for his compassion when working with coaches as the Blue Devils ‘AD.’

Jordan Fahnestock — who was hired by Shirley at age 24 to coach the Pulaski varsity boys basketball team and worked with him for more than a decade — said that each coach felt a sense of genuine trust and respect when addressing numerous matters with Shirley.

“He allowed his coaches to be themselves and because of that, I think it allowed a lot of our programs to have success because he just let us put our own staple to it,” Fahnestock said. “He would do absolutely anything for you and there wasn’t an interaction that you had with him where you didn’t leave feeling better about yourself, because he was just that positive of a person.”

That unassuming approach carried over when working with his fellow administrators. Shirley led the charge to hold regular meetings with the athletic directors of Oswego County schools two or three times per year to discuss their unique needs and commonalities of the athletic programs.

“One of the nicest guys I’ve ever come across,” Central Square athletic director James Drancsak said. “He had a good sense of humor, great person, always did the right thing ethically, and was a big supporter of Pulaski and wanted to see all the Oswego County schools succeed. He always had the best interest of kids in mind and was just a super person to work with.”

Shirley will be remembered for many things within the area school districts in which he devoted his life’s work, but the foremost word used to describe his presence by those he worked with daily is simply, ‘kind.’

“You would see him and you just can’t help but smile,” said Alan Woods, a Pulaski Middle-High School English teacher that worked with Shirley for the duration his 15-year tenure in the district.

“He was perhaps the most kind and genuine, and honest person you would ever meet. He was always happy. ... I think he honestly saw the best in all people at all times, and believed that just a kind word or a helping hand could solve any problem.”