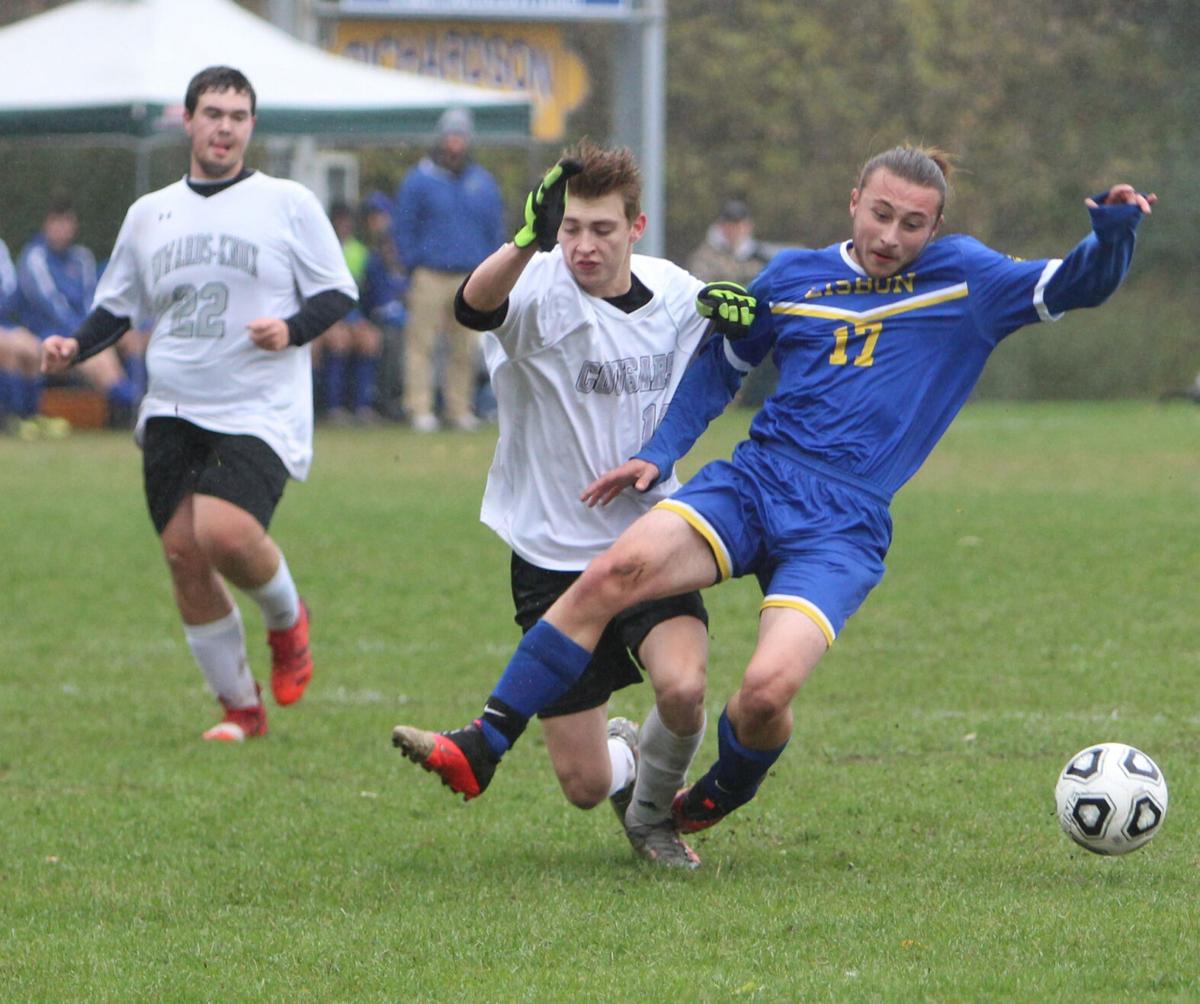 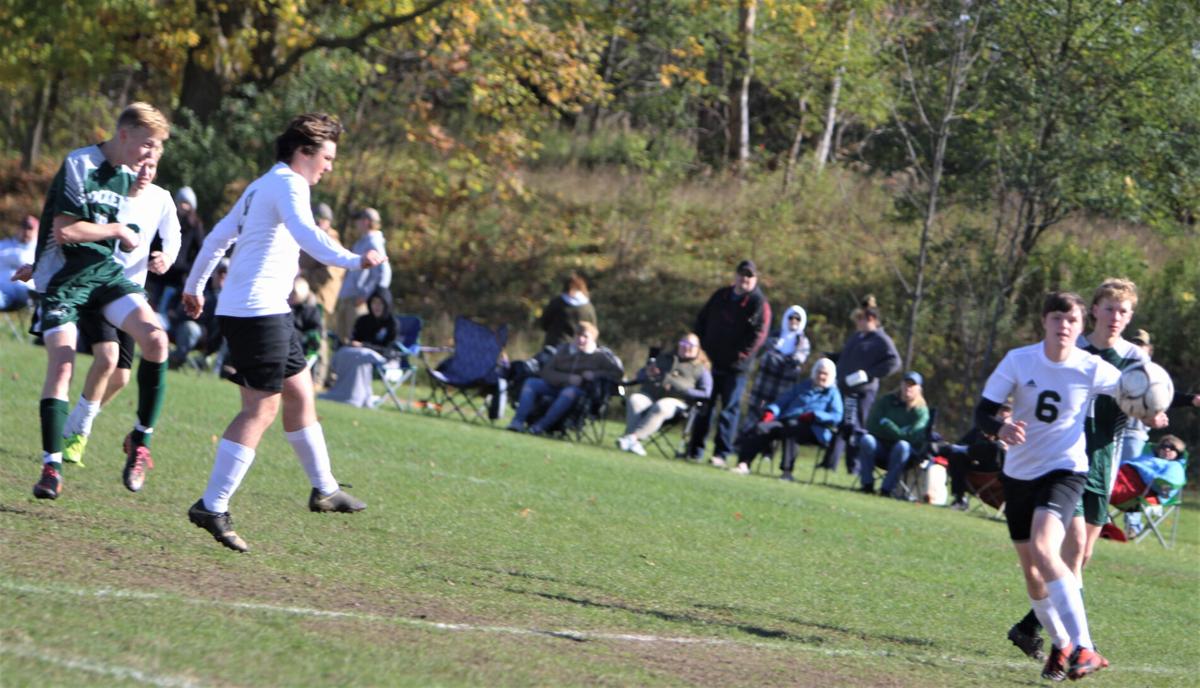 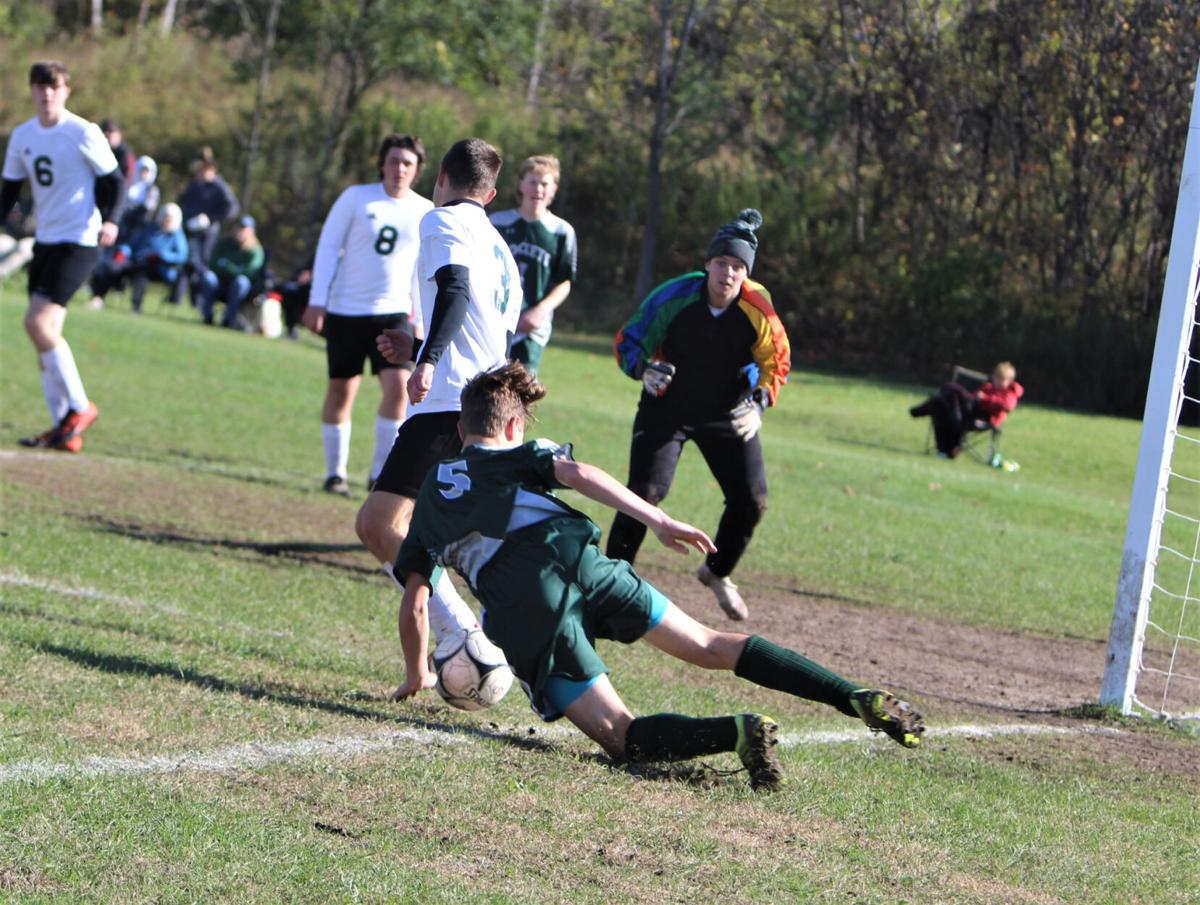 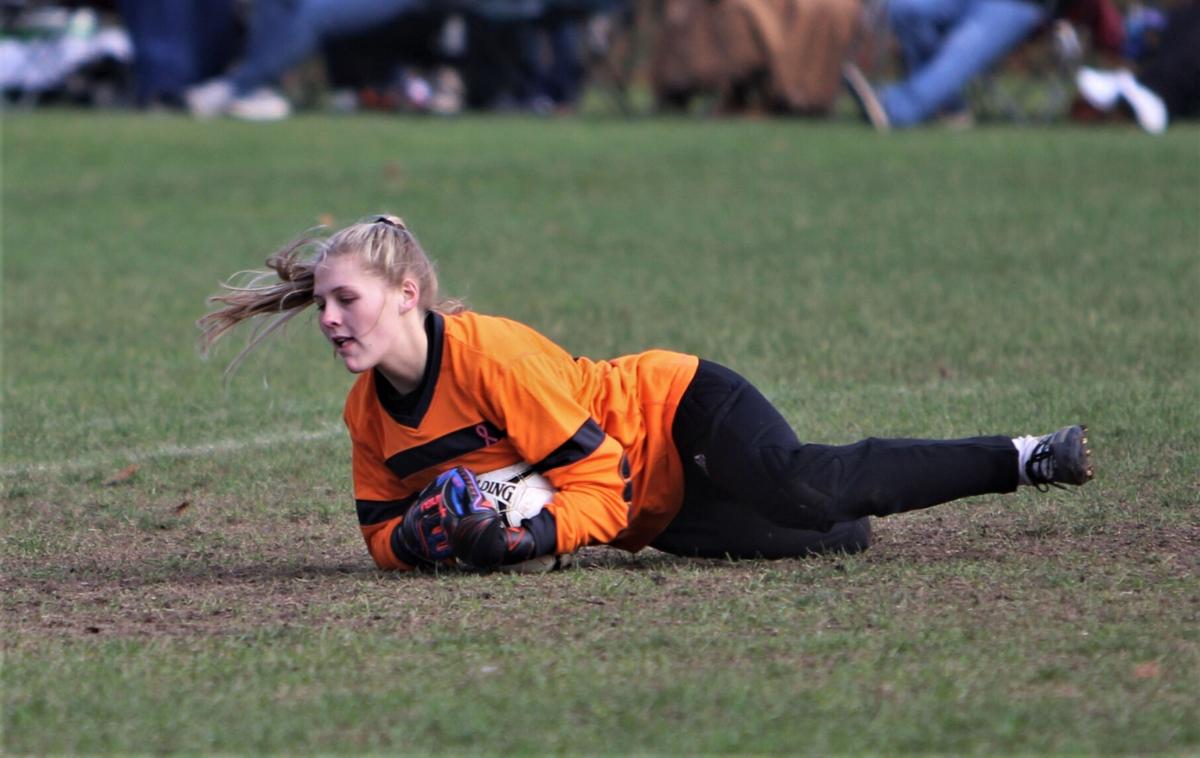 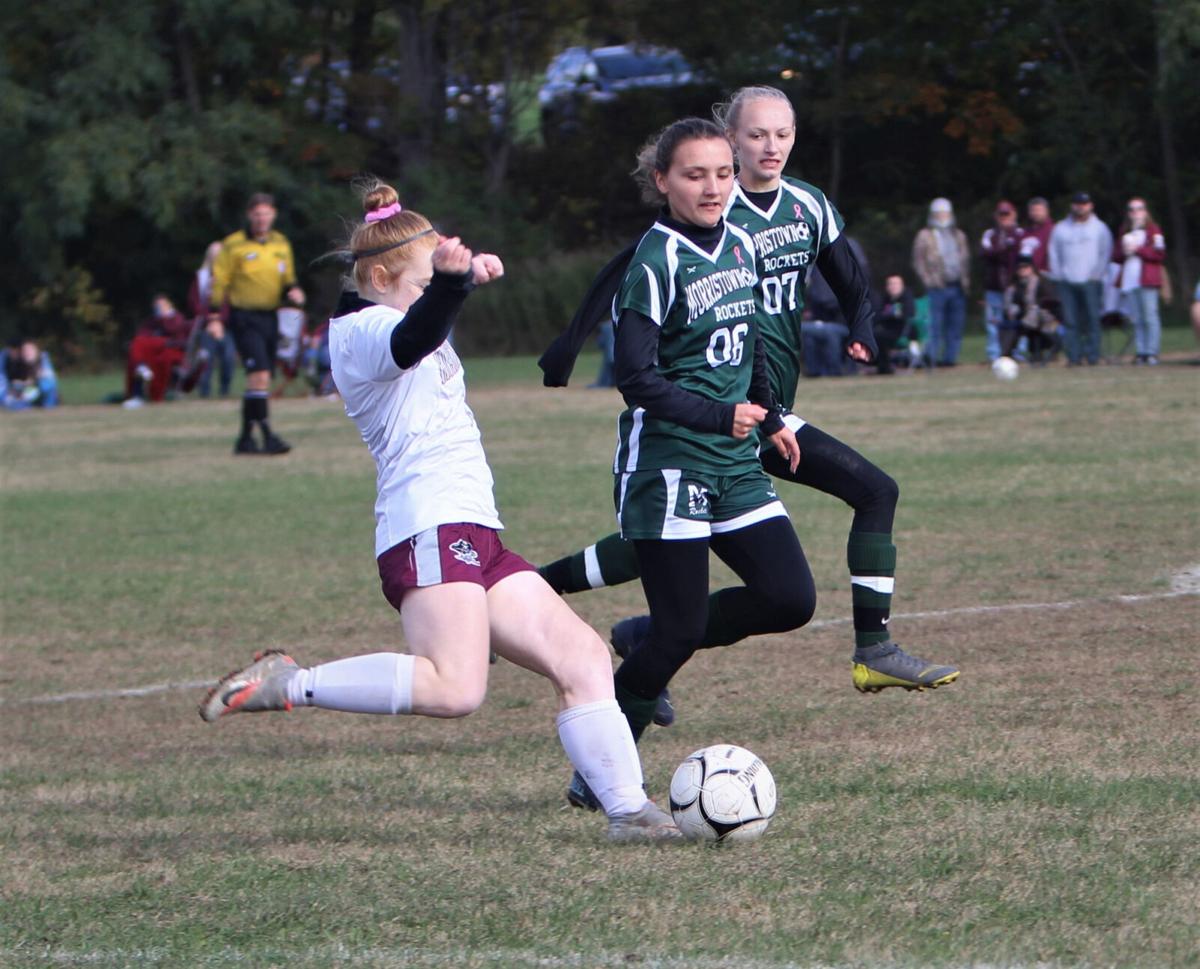 Morristown was opportunistic and accurate to record the lone road victory in Monday’s Class D quarter-finals of the Section 10 Boys Soccer Tournament.

Morristown 4 - C-P 3: The Green Rockets (11-5-0) generated their second four goal game of the season against the Colts who had established themselves as a top flight defensive team. Tristin Simmons converted inside twice from Cooper Bennett to give MCS (10-5-0) leads of 1-0 and 3-1.

Simmons opened the scoring 22:13 into the first half and Ollie Johnson pulled the Colts even eight minutes later with a direct kick. After another eight minutes Jared Young rifled home a shot. Three minutes later, After Simmons scored his second in the fifth minute of the second half, Cody Francis scored from Johnson to reinvigorate the 12-3-2 Colts’ cause.

Aaron Woodcock buried a long shot to give Morristown a 4-2 lead and score what proved to be the game-winner at the 18:26 mark. The Colts scored in close at 29:06 and the Rockets fended off the some well-founded advances in the closing minutes.

“We packed it in late with the two goal lead. That is ucharacteristic for me but it worked. It is back to work for Parishville-Hopkinton and that is going to be a grind. And we lost the Howard boy (Colin Howard) with a possible broken toe,” said Morristown Coach Glenn Colby.

“We had tons of heart and hustle today.”

“It was an evenly matched game and they got the goals they needed,” said C-P Coach Bill Reed.

Lisbon 1 - E-K 0: The only goal came five minutes into the game when Miles Gendenbien scored off a Lucas Gravlin cross. But the Knights (11-1-1) pressured the Cougars’ defense and goaltender Dawson Matthews (15 saves) diligently throughout the contest.

“Usually when we score early we take control and break the game open. But today it just didn’t happen. We had a lot of chances which we just didn’t convert and their defense broke up some of our stuff,” said Lisbon Coach Diky Marcellus after his Golden Knights bounced back from their only loss of the season, against Heuvelton on Thursday.

“We did a lot of good things but in the playoffs you have to score goals. We will have to do a better job at that against Chateaugay. The guys have done a lot this year but we are always pushing them to do more. Because we want them to continue to get better.”

Caleb Richardson had three saves in the shutout.d

Chateaugay 2 - Heuvelton 1: Over the years the Franklin and St. Lawrence Couty Bulldogs have staged a “Paws for the Cause” game to raise money for the fight against Cancer. On Monday the two bands scrapped and clawed in wet, slippery conditions.

Merely a minute into overtime Heuvelton nearly pulled a victory through the airways when Evan Felt, headed a shot off a deflected cross.

Chateaugay (10-5-0) goalie Owen Rockhill, who finished the contest with 16 saves, thwarted the bid with the biggest of his stops.

Eleven minutes later, Chateaugay’s Lucas Monette pounced on the ball in front of Heuvelton’s net after a defender blocked a punishing shot and buried the game-winner.

Chateaugay scored its golden goal to advance, despite Heuvelton (7-5-0) landing quality touches on the ball late in the game where they finished with a 17-7 advantage in shots which included an 8-2 margin in the first half.

Tyson Beaudin, who authored the shot which led to the on-the-rebound golden goal, opened the scoring in the 44th minute and Heuvelton’s Alex Lange tied the game on the run deep inside the Chateaugay’s defense.

“I am going to miss this group. They are an awesome group to coach. Wish all nothing but the best for the rest of year. Thank you being amazing soccer players and better young men,” said HCS Coach Bruce Durrant in a facebook post.

P-H 1, Harrisville 0 (OT): Reynold Voisine scored from Jon Snell just 1:10 into the first 10-minute overtime to lift the Panthers (13-4) past the Pirates (8-8-1). Kade Hayes turned aside three shots for the shutout while Nolan Sullivan had nine saves for the Pirates.

Morristown 8 - H-D 1: Cooper Bennett provided the Rockets (9-5) with a huge offensive spark by scoring the first and third goals and setting up Seth Witherhead for the second goal. Witherhead also assisted on the first goal and Zach Watson set up the third.

“I decided to rest Tristin Simmons today, he was still pretty sore, but he could have played. I was happy with the way the played without him. I moved Seth Witherhead up because he works so hard and he scored two goals and Cooper Bennett always plays well. And Colin Howard gives us a lot of toughness” said Morristown Coach Glenn Colby.

MCS received three unassisted goals in the last eight minutes of the first half from: Aaron Woodcock, Joe Wrobel and Witherhead. Wrobel also scored from Austin Colby in the second half where Dom Perretta headed home a corner kick from Bennett for his first varsity goal. Jacob Spencer scored the H-D goal unassisted with 55 seconds to play.

MCS’s Peyton Donnelly did not make save for Morristown and Andrew Matthews stopped five shots for H-D.

In the Class B openers the number four seeds both advanced as the Canton Boys blanked Gouverneur 6-0 and the Potsdam Girls downed Salmon River 2-0.

The second half scoring was Nate Romano from Christian Simmons and Johnny McLear from Jacob Rosales. Hayden Todd posted the shutout,