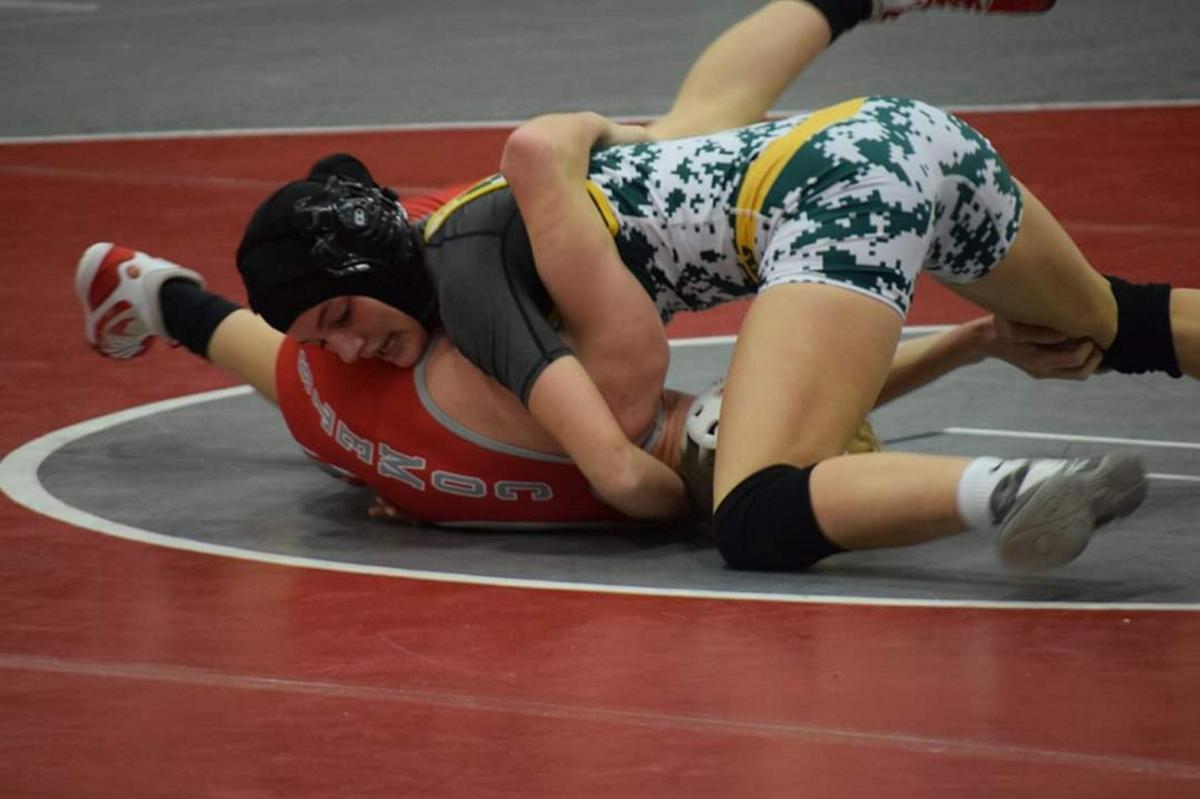 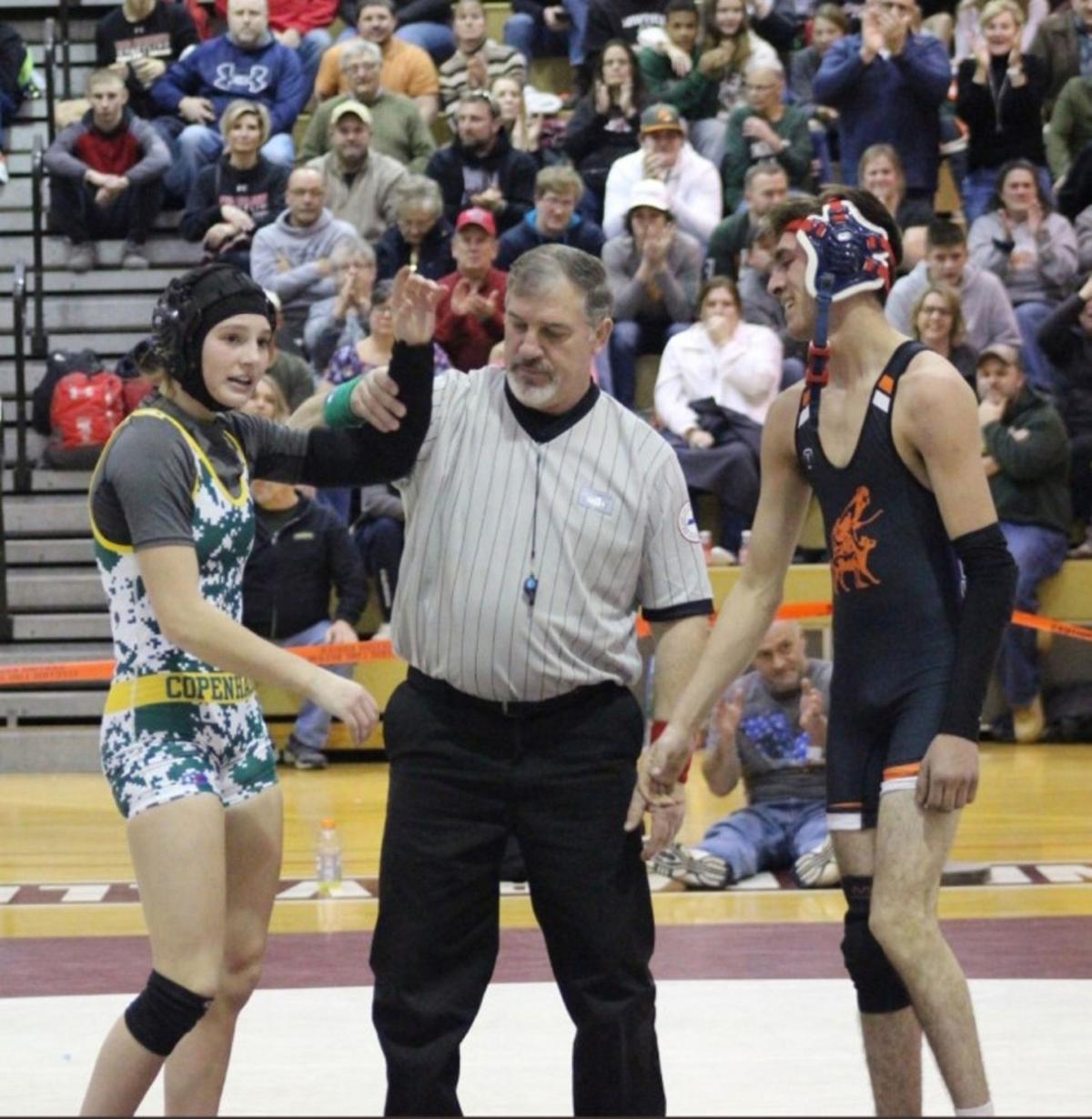 Copenhagen’s Riley Dalrymple shakes hands with her opponent after her victory in the Section 3 Class D tournament. Provided photo 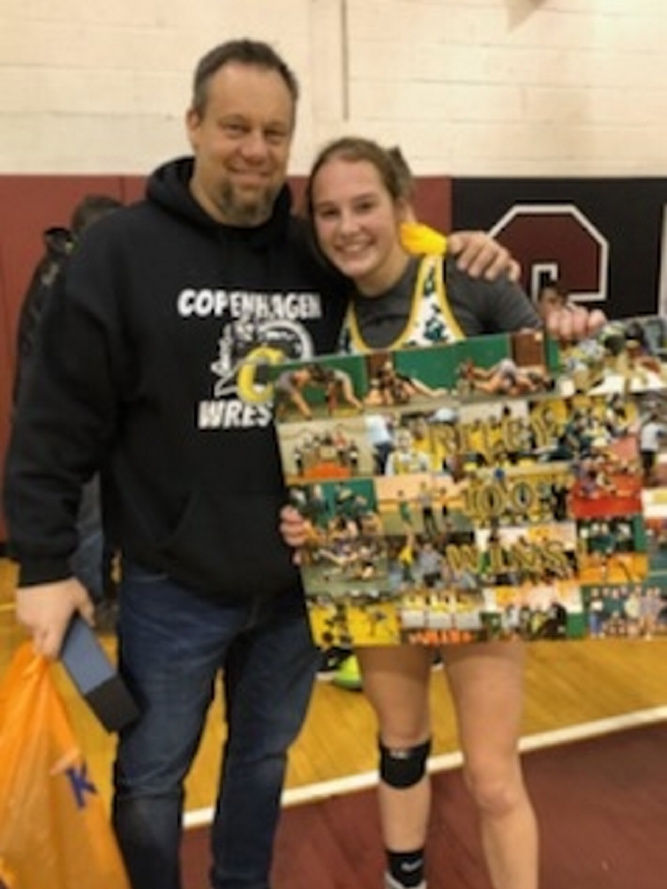 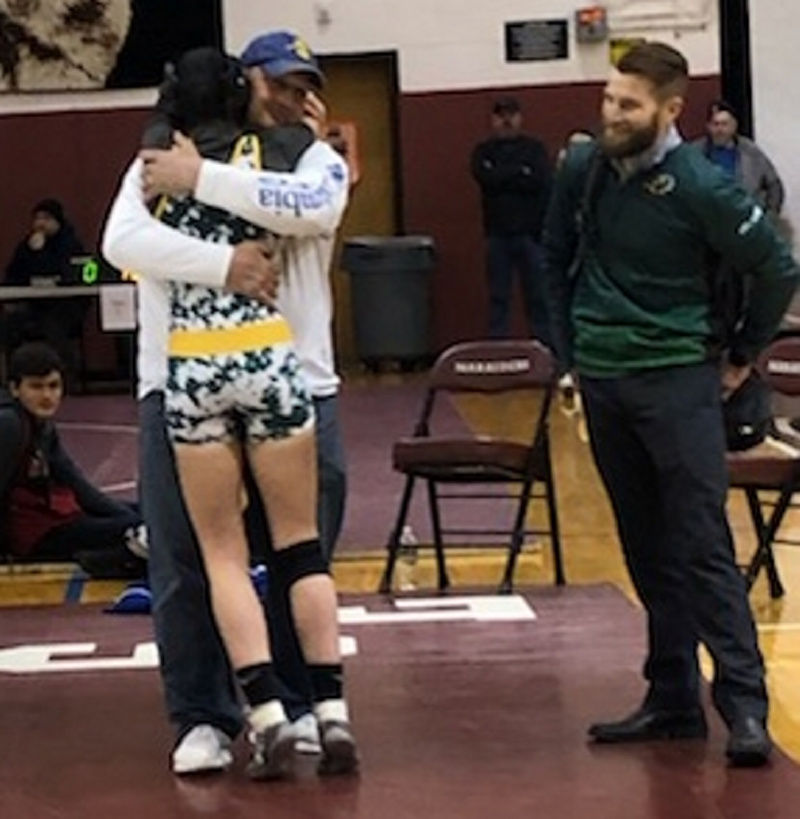 Copenhagen’s Riley Dalrymple shakes hands with her opponent after her victory in the Section 3 Class D tournament. Provided photo

Copenhagen’s Riley Dalrymple has broken plenty of barriers in her career and she finished with a big one that plenty of male wrestlers don’t achieve.

The Golden Knights senior reached the 100-win mark on Feb. 8 at the Section 3 Class D tournament at Cooperstown. The victory was a thrilling one as she rallied to beat Lucas LoRusso of Cooperstown to earn third place in the 113-pound division.

“That was my goal last year when I did the math and realized it could do it (win 100 matches),” Dalrymple said. “I was really excited that happened.”

She hit many milestones in her career, including winning the Section 3 Class D crown at 113 in 2019. Dalrymple also claimed second at the Phoenix Mid-Winter Classic on Jan. 18 and fifth at the Fallen Heroes Tournament at SUNY Oswego on Jan. 4.

Dalrymple compiled a 22-13 record in her final high school season despite suffering an elbow injury in a tournament prior to Christmas, but she completed the season with the huge milestone.

“I took a lot of pride in being able to finish the season,” Dalrymple said. “I showed the boys how tough I was.”

Dalrymple hyperextended her elbow in the December match, but still managed to pull out the victory. Her father, Scott, was worried that the injury would end her season, but she managed to push through it. She did get an MRI this week to determine if there is any structural damage. The injury did keep her out of the state girls Folkstyle tournament that she won at 117 pounds in 2018.

“We milked it for the season,” Scott Dalrymple. “It wasn’t too bad because she kept wrestling.”

She took up the sport after seeing a notice for tryouts when in kindergarten. Her commitment to the sport began to grow in fifth grade and she wound up wrestling on the varsity team for five seasons.

She will continue her wrestling in college and she’s closed in on her choice, which has not been revealed. They wanted to do a full signing ceremony with officials from that school. However, that’s been thrown into doubt after the COVID-19 outbreak closed down area schools.

“We were just waiting for the school officials to come up and do a full-blown ceremony, but that’s obviously on hold,” Scott Dalrymple said.

Dalrymple will reveal her school choice when students return from hiatus. She never thought that taking up the sport at a young age would result in landing a scholarship for a college program.

“It’s exciting to be able to think that I’ll be doing this in college,” she said.

The coronavirus has also postponed or canceled some of the tournaments that she attends. She was looking forward to the NHSCA 31st annual High School Nationals in Virginia Beach, Va.

“I was kind of disappointed that the tournament got postponed because it was my senior year,” she said.

However, the postponements could give her more time to heal her elbow. The time off would give her a chance to be ready for wrestling season in the college ranks.

“It’s kind of a blessing in disguise because she’ll be ready to go for college,” Scott Dalrymple said.

Her dream is become an Olympic wrestler and she hopes going to college will help that dream become possible.