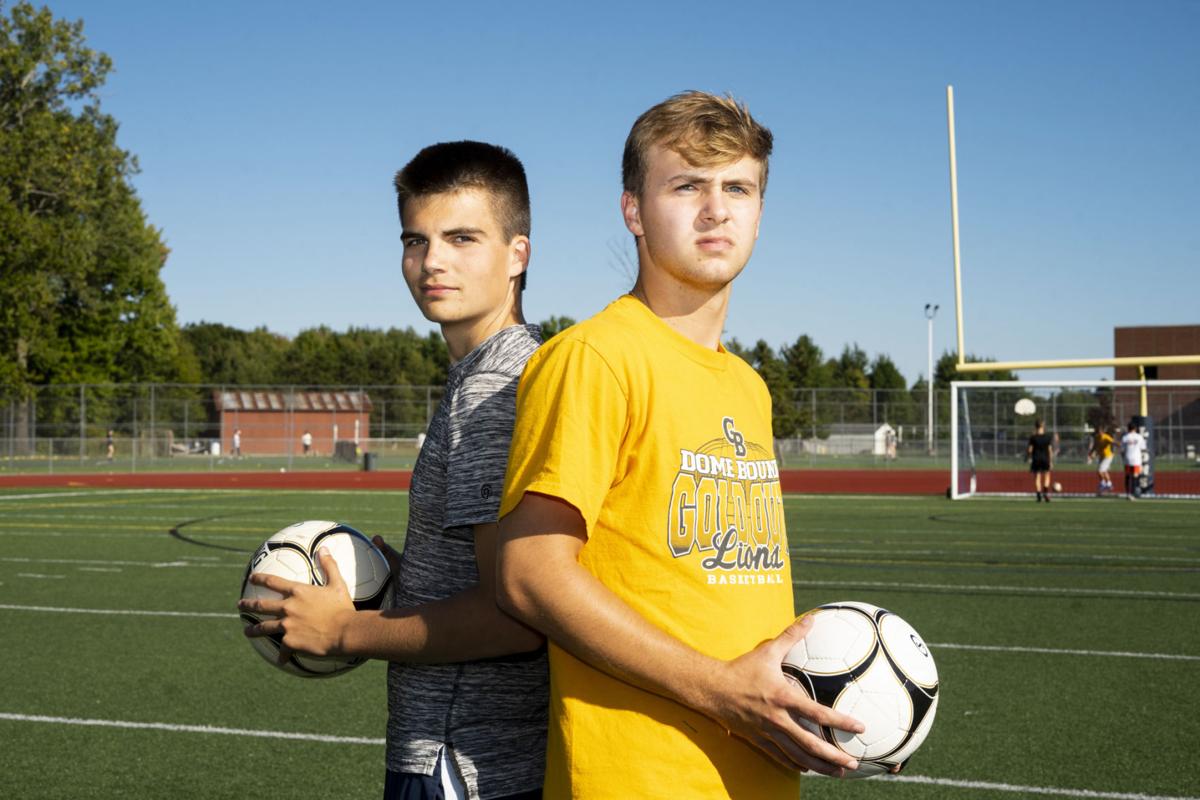 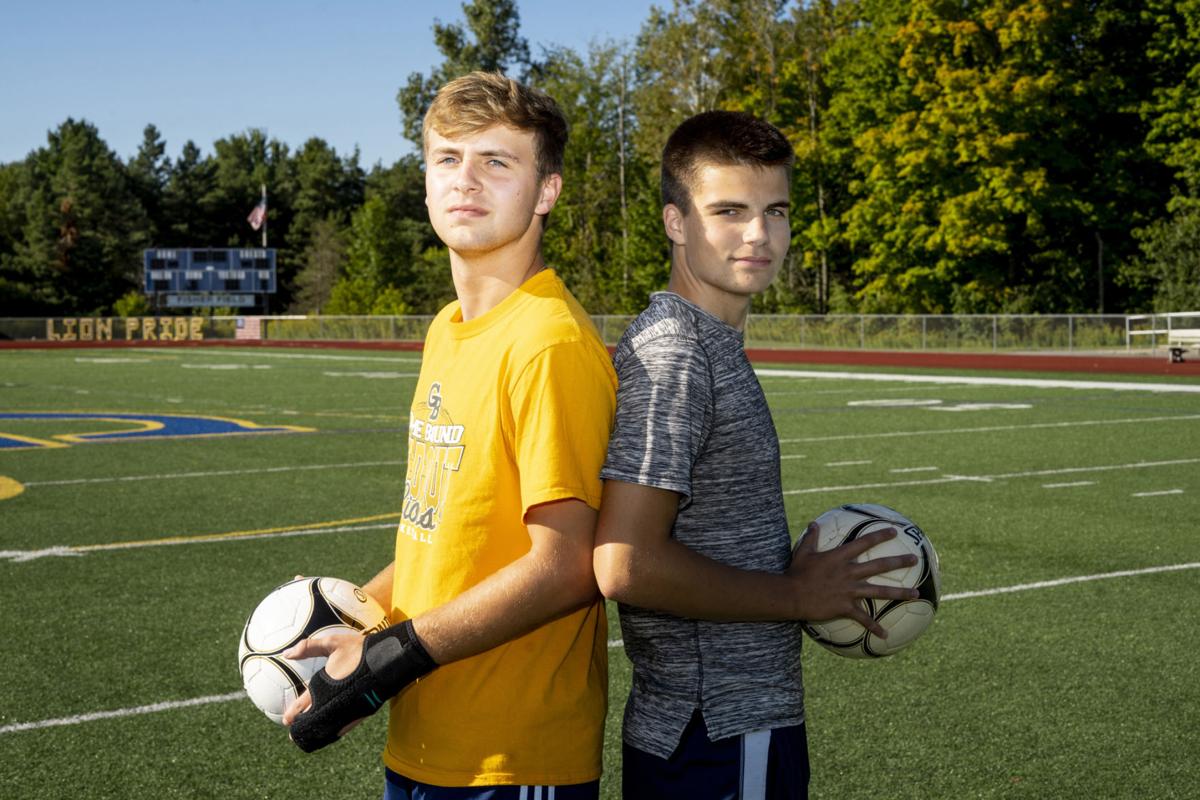 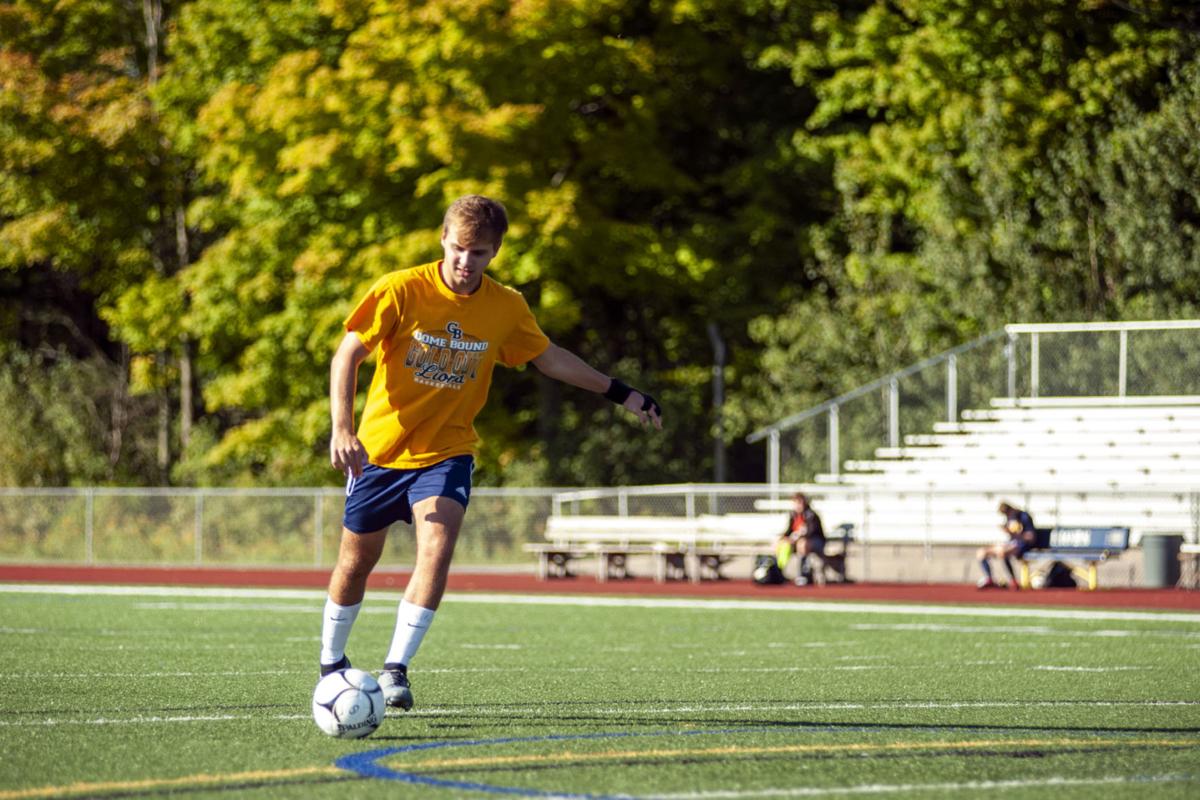 Nick Lennox of General Brown’s boys soccer team lines up to shoot the ball into the net during practice Tuesday in Dexter. Julia Hopkins/Watertown Daily Times 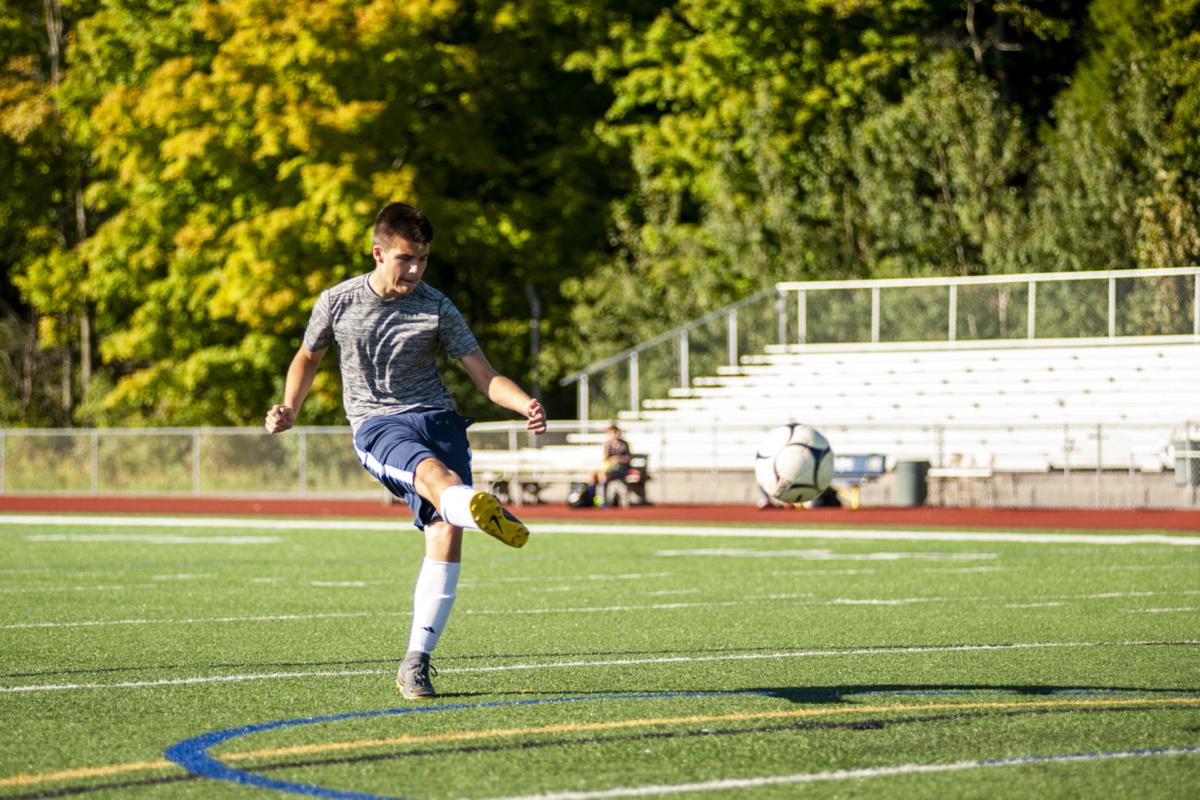 Nick Lennox of General Brown’s boys soccer team lines up to shoot the ball into the net during practice Tuesday in Dexter. Julia Hopkins/Watertown Daily Times

While bracing himself during a fall while making contact with the opposing goalie, Lennox appeared to injure his left hand. Through pain, Lennox stayed in the game despite suffering a broken bone in the hand.

“I did it our first game against Salmon River, it was actually really early in the game, probably five minutes in,” Lennox said before team practice Tuesday. “I just had to play through it, because I wasn’t going to let it stop me.”

After he received X-rays on the hand, Lennox didn’t let the injury sideline him from a start to the season that has developed into something special for the Lions.

“I always try and do what I can,” Lennox said of the injury, as he wraps up his left arm before each game. “I just got right back up and started playing again.”

“He takes the pain and he knows at the end of the day that he’s a captain,” Lions junior midfielder David Jenner said of Lennox. “He’s got to show these kids, these younger kids coming up that you have to be tough at the varsity level or even going into college. He battles through everything and whenever we face adversity, he’s always there for us.”

Lennox and fellow co-captain Jenner have helped guide General Brown to its best start in boys soccer in the 17-year history of the varsity program.

“It feels really good,” Lennox said. “The past couple years we’ve had kind of a slow start. And then finally this year, we picked it up and came out with a good start.”

“Having the two of them as a combination of leadership has been great,” General Brown coach Phil Jenner said. “With Dave’s knowledge of the game and Nick’s as well, it’s fed off on other players, too. They know each other really well, they do a lot of stuff together outside of school, it’s just a good team chemistry.”

The Lions sport a 6-0-1 record, including a 4-0 showing in the Frontier League, good for an early lead in the circuit’s “B” Division.

General Brown defeated Watertown, 2-0, on Wednesday night for its first ever win against the Cyclones.

“I couldn’t have imagined it,” David Jenner said Tuesday of the team’s start. “At the start of the year, every team has its doubts. But we knew we had a great group of guys coming in and we played some difficult teams. This team has faced adversity and we just keep grinding, we keep showing up and it’s great to have a great group of guys like this.”

As five-year varsity player, Lennox has experienced some lean times, such as last season when the team won only six games.

“It was kind of tough,” Lennox said of those previous seasons. “We knew that we were definitely a better team than we played in those years. And now knowing that all the guys who did play those years and are now here in their senior year, it feels pretty good for us.”

Now after defeating Indian River in a league game Monday, General Brown is already in position to improve on the win total from last year.

“We knew that we could start off well,” Lennox said. “And we knew we were going to be a good team this year, because of all the experience we had through the past years. So we were pretty confident for this year.”

Phil Jenner has coached the varsity boys soccer team at the school for 15 of its 17 seasons, including its first campaign back in 2002. He recalled the first campaign at the varsity level in 2003 as the Lions went 0-16 and scored only four goals all season.

“When we first had our varsity team, we scored four (total) goals and we got blistered every game,” Phil Jenner said. “The kids worked hard and they laugh when I tell them this, but the parents used to cheer when we got the ball across midfield and that was an accomplishment. And when we scored our first goal, you would have thought we won the Super Bowl.”

This year, General Brown is off to a historic start. After downing Salmon River, 5-3, in the season opener on Aug. 30, the Lions won at Indian River 5-1 on Sept. 5 to record its first win against the Warriors since 2007.

The Warriors then defeated foe Lowville, 4-2, on Sept. 7 in its league opener and then edged reigning Section 3 Class C champion South Lewis, 1-0, on the road on Sept. 9, before recording a 1-1 tie at Central Valley Academy on Saturday night.

On Monday, General Brown trailed Indian River by two goals at halftime in a league game, but rallied to win 3-2 as sophomore Lucas Hernandez-Murillo scored two goals, with Jenner assisting on the tying goal and sophomore Eric Randall followed with the game winner in the 68th minute.

Lennox moved back up to play forward after he played in the midfield last year with David Jenner. Lennox, who leads the team in goals (six) and points, is part of a balanced scoring attack by the Lions, as Izeigha Collins (three goals-three assists-nine points), Hernandez-Murillo (3-1-7) and Randall (2-3-7) have also contributed. Also heading into Wednesday, five others have scored a goal each, including David Jenner.

“Last year we didn’t have many goals,” Lennox said. “This year we wanted to put some quicker guys, like myself and Izeigha Collins, to get more regular goals.”

“He’s a great leader on the team,” Phil Jenner said of Lennox. “He draws a lot of attention on the field and that frees up other kids. They try and mark Nick, but we’ve got other guys who can score, too, and that helps.”

Lennox, who also plays basketball and baseball at General Brown, would like to play soccer in college and his hand injury won’t prevent him from that goal.

“So he has to play with a slightly broken hand, it’s not a cast, but he can’t run his full potential,” coach Jenner said. “So he’s dealing with that and trying to make plays, and he’s got to worry about not hurting his hand, which is hard to do. He’s just a solid athlete, it shows his toughness.”

David Jenner started out as a defender in his first season with the Lions as a freshman, but remains in the middle this season as a central midfielder.

“He does most of the work for us right in the middle of the field,” Lennox said of Jenner, who has also totaled three assists through six games this season.

“Dave is kind of like that quarterback where he used to be a defender,” Phil Jenner said of his son. “So when he’s a defender in the midfield, he’s able to stop the other team’s top attack. And because he’s got such good skill in the middle of the field, he’s able to get the ball to the players who are open and make very good decisions in quick situations.”

Like his dad, David Jenner has a hockey background and during the winter months plays with the St. Lawrence Steel “AA” level team in Canton.

While the younger Jenner directs the midfield, fellow co-captains senior Luke Romano and junior Robbie Hunter guide the Lions’ defense, with freshman Tucker Rosbrook in goal. Romano and Lennox are two of 10 seniors on the team.

“Because of the seniors that we have, we go with their experience and then we draw from those younger players who are playing soccer year round,” Phil Jenner said.

“We just have to hope we can bring what we’ve got,” David Jenner said. “ ... It’s a schedule that’s not easy, but it’s definitely doable. The challenge right now is to maintain it. We’ve shown now that we can keep this high style of play, now we have to be able to maintain it and keep it going.”

“So we’re still in unforseen territory for this soccer program,” coach Jenner added. “And hopefully it gets more people interested to come and watch us, and maybe pick up the game at some point.”