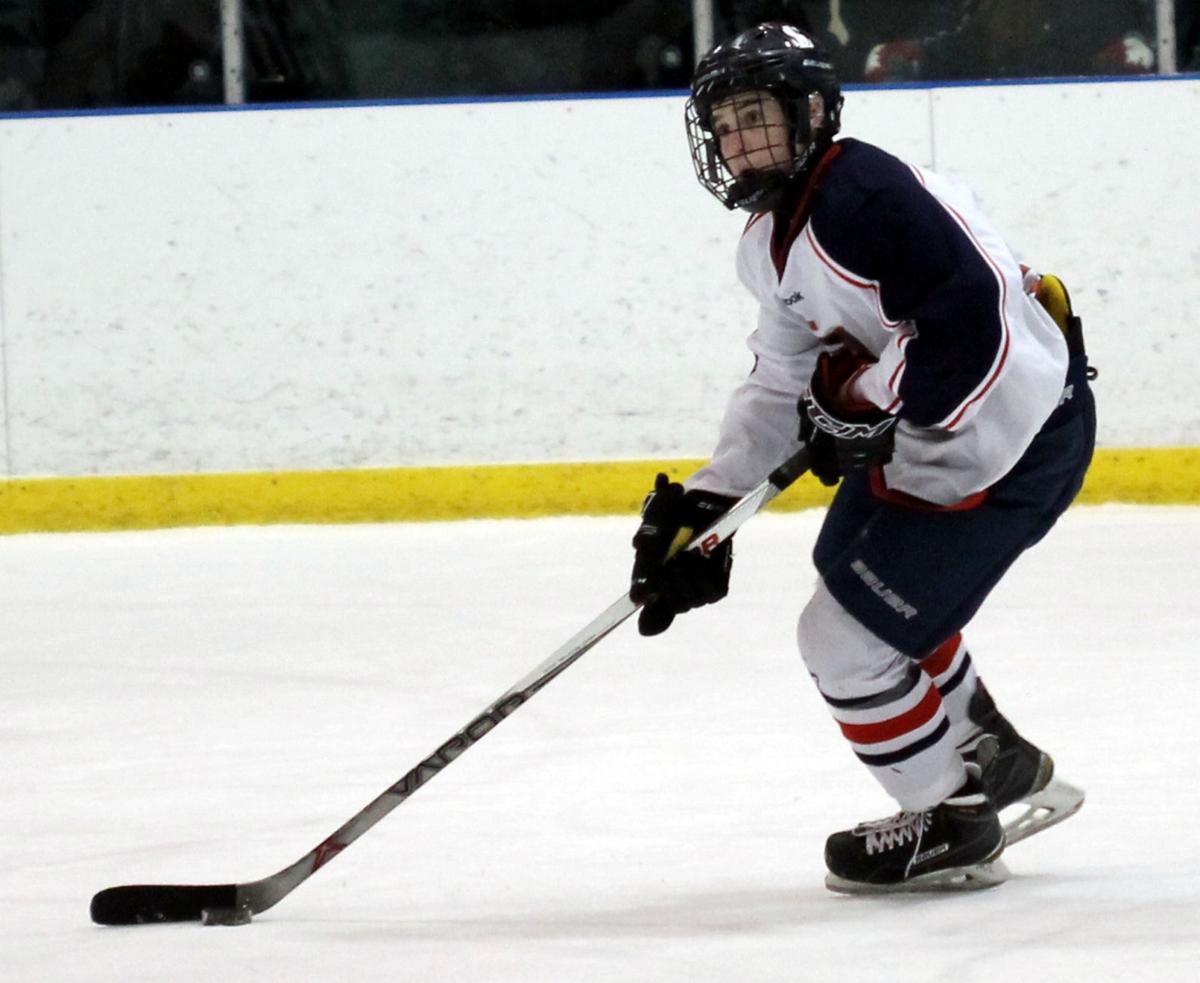 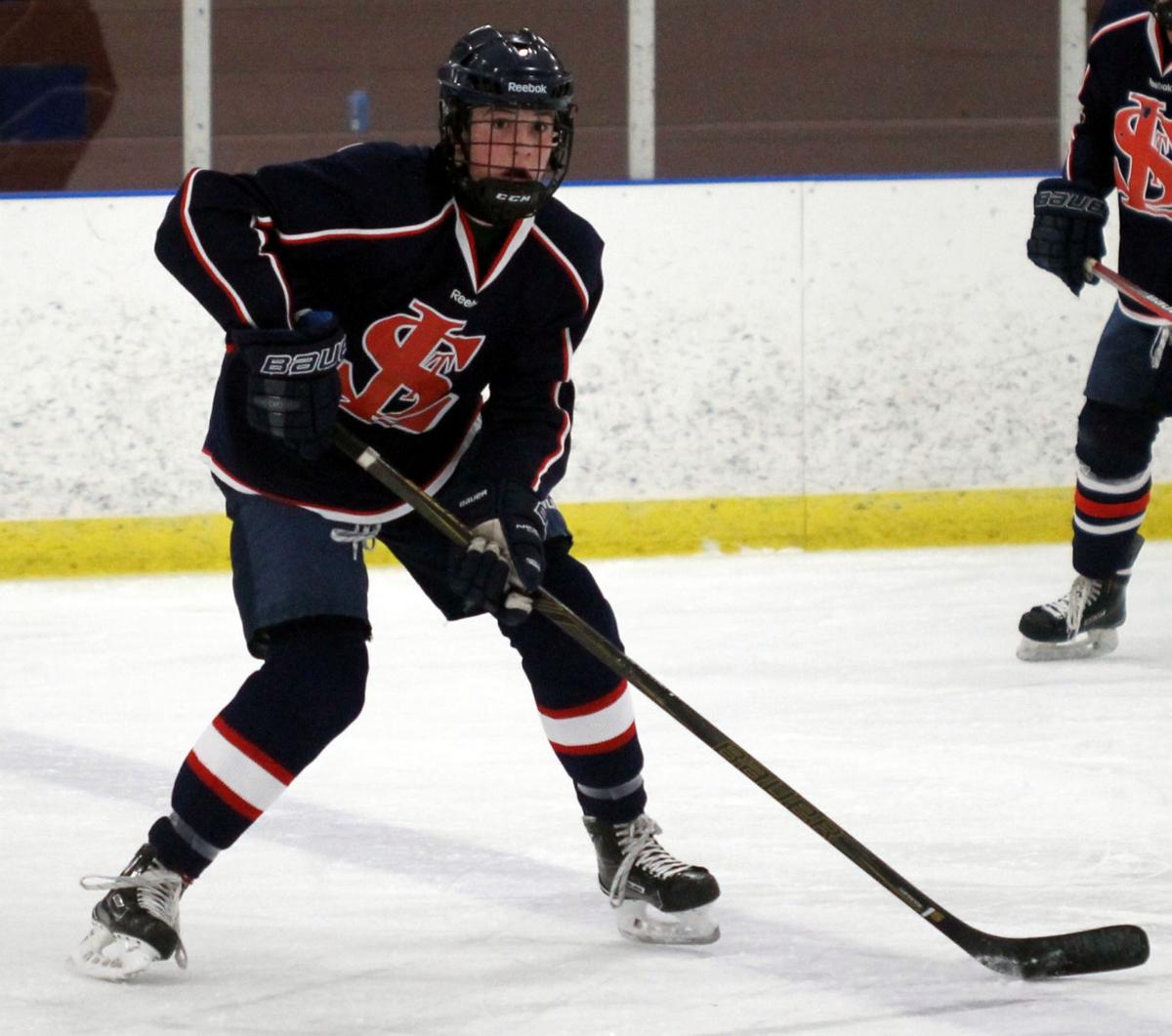 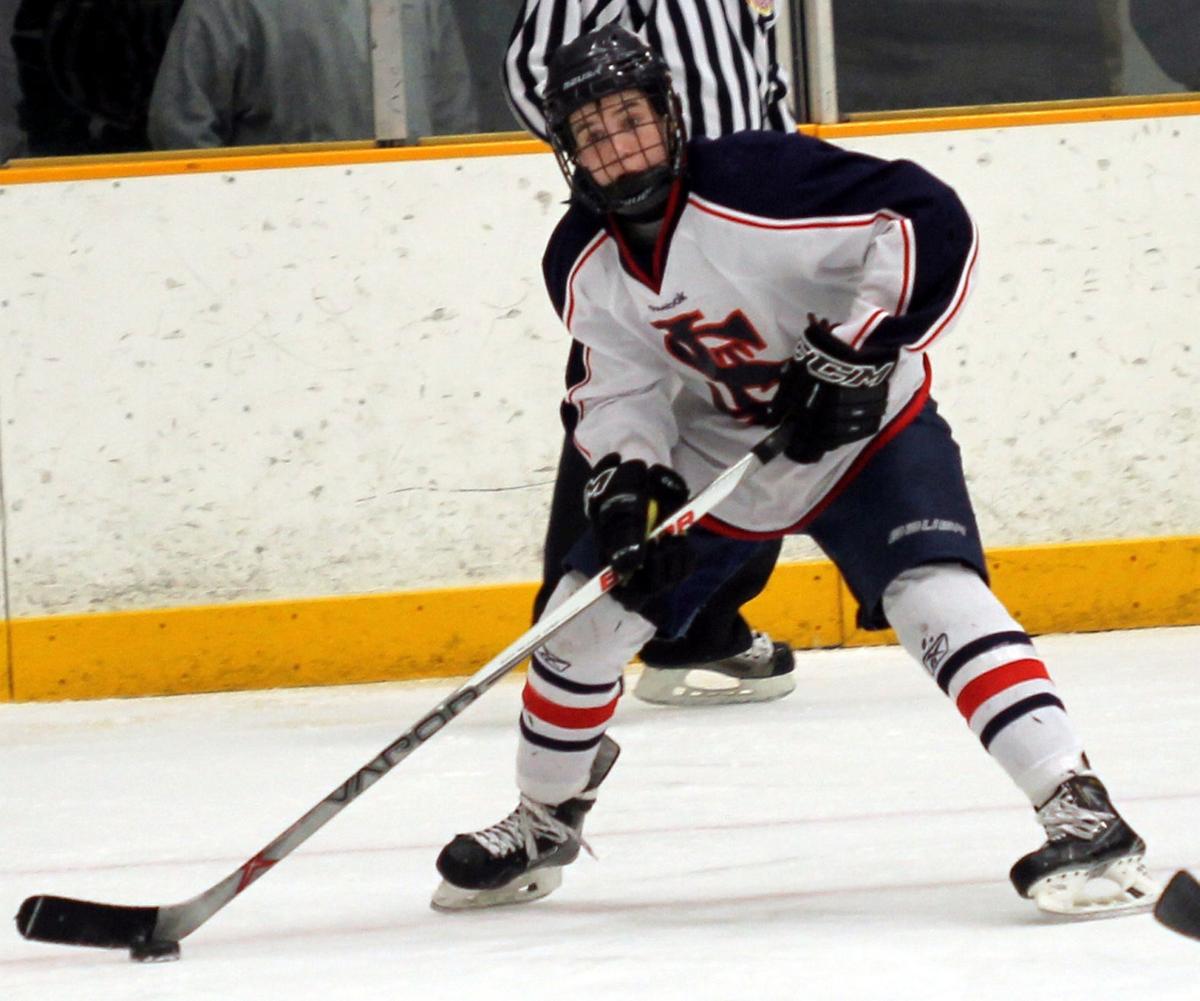 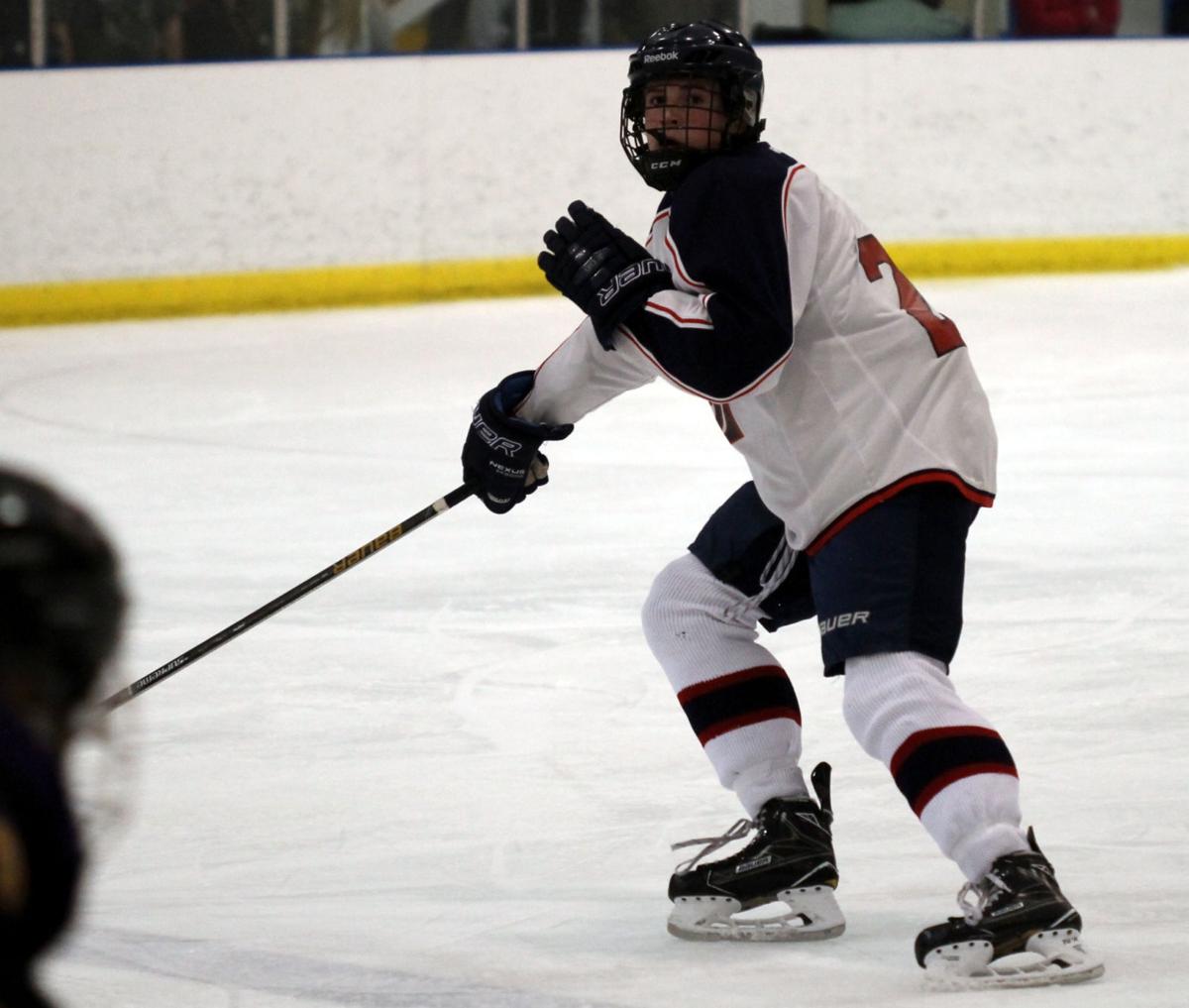 Fans crowding Clarkson University’s Cheel Arena to watch the first game of the annual nonleague series with archrival St. Lawrence University still talk about the time when the coronavirus pandemic wiped out the 2020 ECAC playoffs and how good it feels to be out watching college hockey again in person.

As the game unfolds in front of them, sophomore forward Will Arquiett leads a rush up the ice for the visiting Saints. He looks up to see a familiar face matching up against him defensively along the blue line for the Golden Knights. It’s longtime friend and former St. Lawrence Central schoolmate Carter Rose.

“That would be pretty cool,” said Arquiett, a Brasher Falls resident who verbally committed to extending his hockey career at SLU in December 2018 and is on schedule to become a Saint for the start of the 2021-22 season.

“My dream has always been to play hockey in college and to play someplace that was close to home,” he added. “I grew up here so I’ve known about St. Lawrence and Clarkson for a long time. When I toured St. Lawrence, I really liked the school and the whole environment there. I thought it would be a good opportunity for me to play.”

The possibility of the two one-time Larries squaring off as local college rivals took a big stride toward becoming reality this spring when Rose made a verbal commitment to compete for Clarkson starting in the fall of 2022.

“Our family has had season tickets for Clarkson hockey since I can remember,” said Rose, who lives in Winthrop and was also recruited to play collegiately at SLU and Arizona State.

“At the end of prep season, back in March, St. Lawrence contacted me and offered a full scholarship and Clarkson called me the same day,” he added. “It was a dream-come-true when I committed to Clarkson.”

Both prospects have traveled similar routes in their budding hockey careers that will next see them crossing paths more than 2,400 miles from home next season when they trek across the continent to compete for opposing teams in the highly touted British Columbia Hockey League.

Along with being members of Tri-Town Minor Hockey’s Timberwolves youth program that produced several New York State Amateur Hockey Association Tier III championships at the Squirt and PeeWee levels, Arquiett and Rose continued showing their potential skating for the Larries under the guidance of veteran coaches Mickey Locke and Randy Roy. After making lead contributions as underclassmen to teams that won Section 10 Division II championships four times in five years, both left SLC following their sophomore seasons to further hone their hockey skills at the prep school level.

Arquiett, a 5-foot-7-inch, 155-pound forward who turns 20 in June, wound up going to Northwood Prep in Lake Placid from 2016-19 where he amassed 188 points (83 goals, 105 assists) in 215 games. It was during the latter stages of his senior season at Northwood that he was offered the chance to play at SLU.

“As soon as I got to Northwood, I loved it,” Arquiett said. “I got a lot of exposure there. We played in a tough league and played at a lot of big tournaments with scouts from all over.”

Rose, a 6-1, 170-pound blueliner who was on the St. Lawrence Thunder 16U team that won a USA Hockey National Tier II championship in 2018, originally planned to attend Northwood along with his older brother, Drew, starting in the fall of 2018. But due to circumstances beyond his control, he had to change his plans and ended up attending Holderness School in Plymouth, N.H., instead.

“For whatever reason, there wasn’t going to be a place for me at Northwood but they helped me reach out to some of the other prep schools,” said Rose, who celebrates his 18th birthday in August. “Holderness was something that came out of the blue. I didn’t know anything about it.”

At Holderness, Rose quickly established himself as a capable two-way blueliner. In the 50 games he played for the Bulls, he tallied 49 points on 12 goals and 37 assists.

“It was the best two years of my life. It was super fun,” he said.

Having made their verbal commitments, both were encouraged to continue developing their potential by playing in the BCHL, a Junior A league made up of 17 teams that consistently produces more than 100 college recruits each year. Last winter for instance, a total of seven players on the Clarkson roster had BCHL experience, including Massena product Jordan Robert, who saw limited time as a freshman forward for the Golden Knights in his rookie season. The SLU roster featured two BCHL alum, including former Norwood-Norfolk standout Kaden Pickering, who just finished up a sophomore campaign in Canton.

Arquiett, who is the son of Bill and Denise Arquiett, is one of eight players currently playing in the BCHL that has committed to play at SLU while Rose is one of two slated to compete for Clarkson.

“Juniors is definitely a different level of hockey,” said Arquiett, who tallied 30 points in 53 games on 16 goals and 14 assists in his rookie season with the Cowichan Valley Capitals. “It’s a little faster and a little tougher physically. Because things are quicker, you have less time to make decisions with the puck.”

“It wasn’t a big transition from prep school hockey though,” he added.

Rose, who is the son of Chris and Julia Rose, is slated to play for the Nanaimo Clippers starting this fall.

“I’ve never been out there but it sounds like the league fits my style,” said Rose, who expects to play at least two seasons on the west coast of Canada. “I’m really looking forward to it.”

According to both, their development in the BCHL will be closely monitored by their future college programs and the next important step up the hockey ladder will be the official signing of letters of intent to play for the schools they have chosen.

“A lot of it depends on how you progress at the next level. It could be two or three years down the road before they think you’re ready so the decision when to sign is up to the coaches,” Rose said.

“Nothing is set in stone until you sign the letter of intent but from what I’ve been told, it’s never a good idea to back out of the verbal commitment,” Arquiett said.