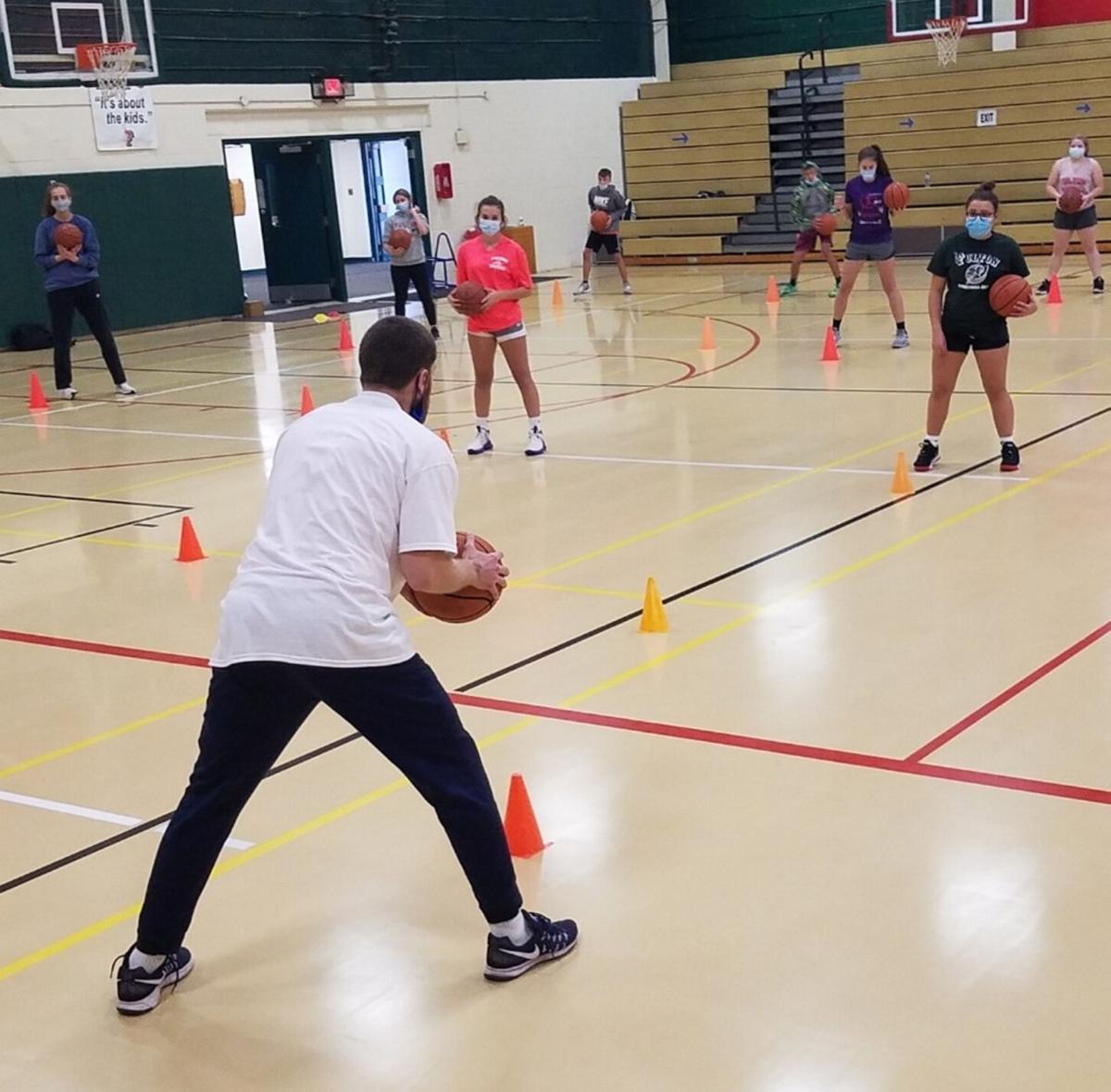 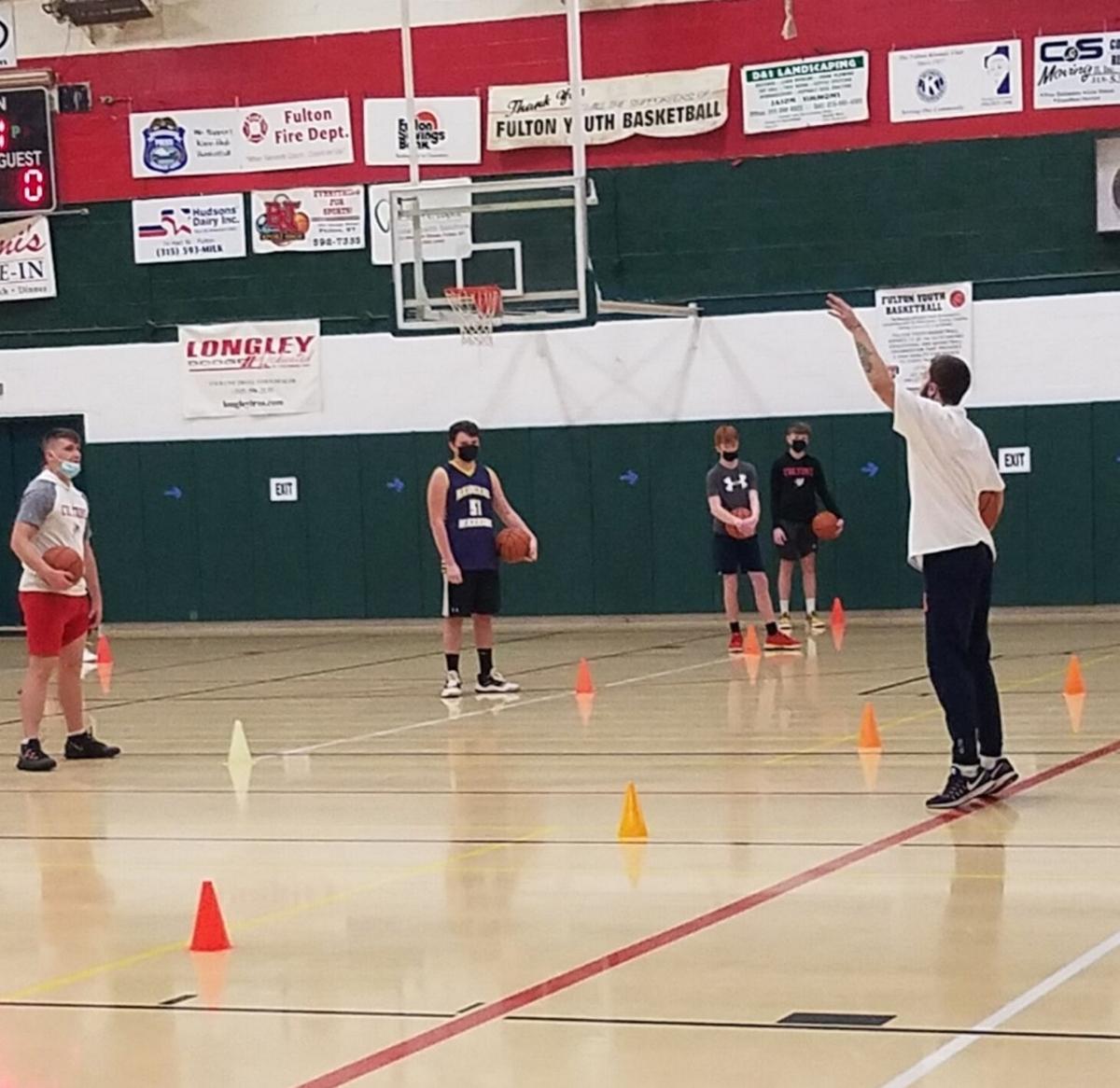 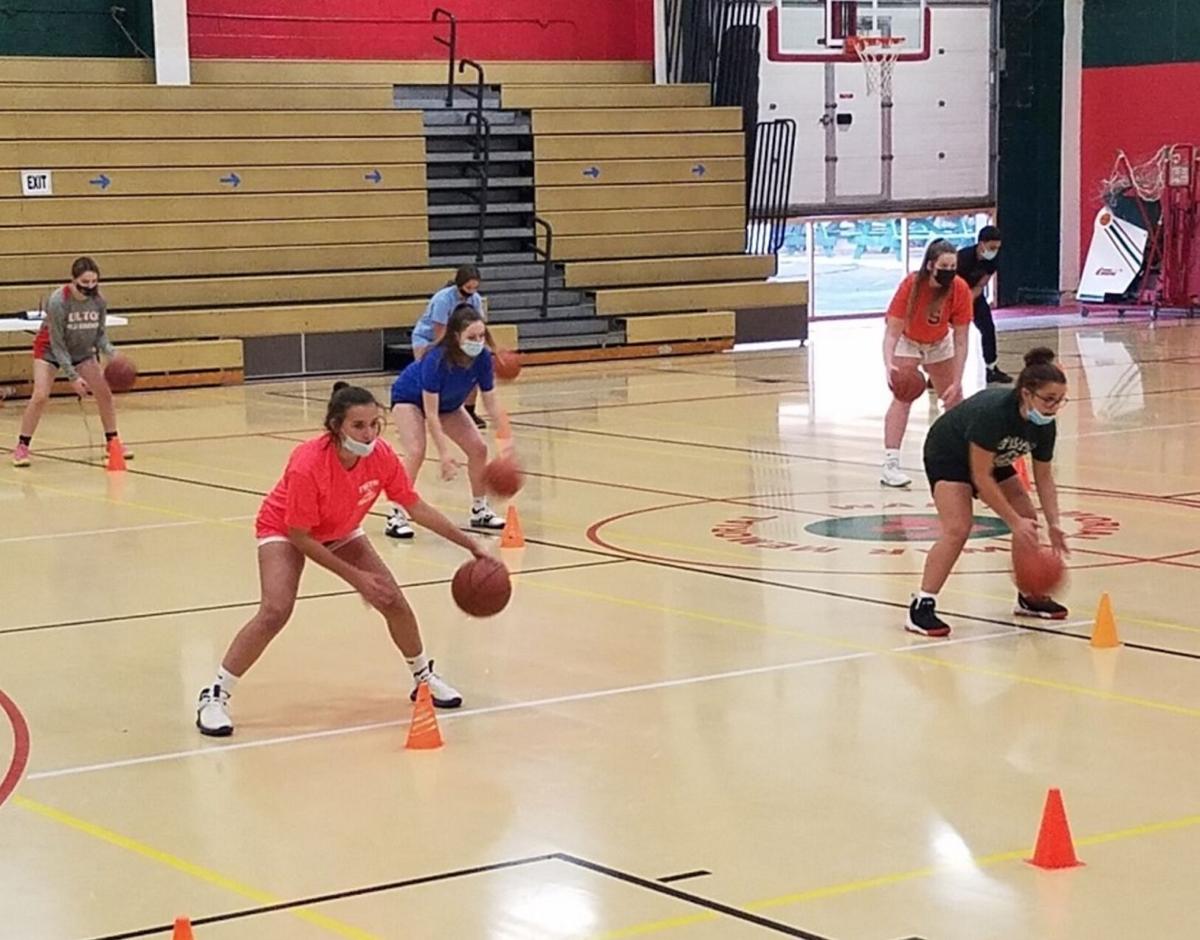 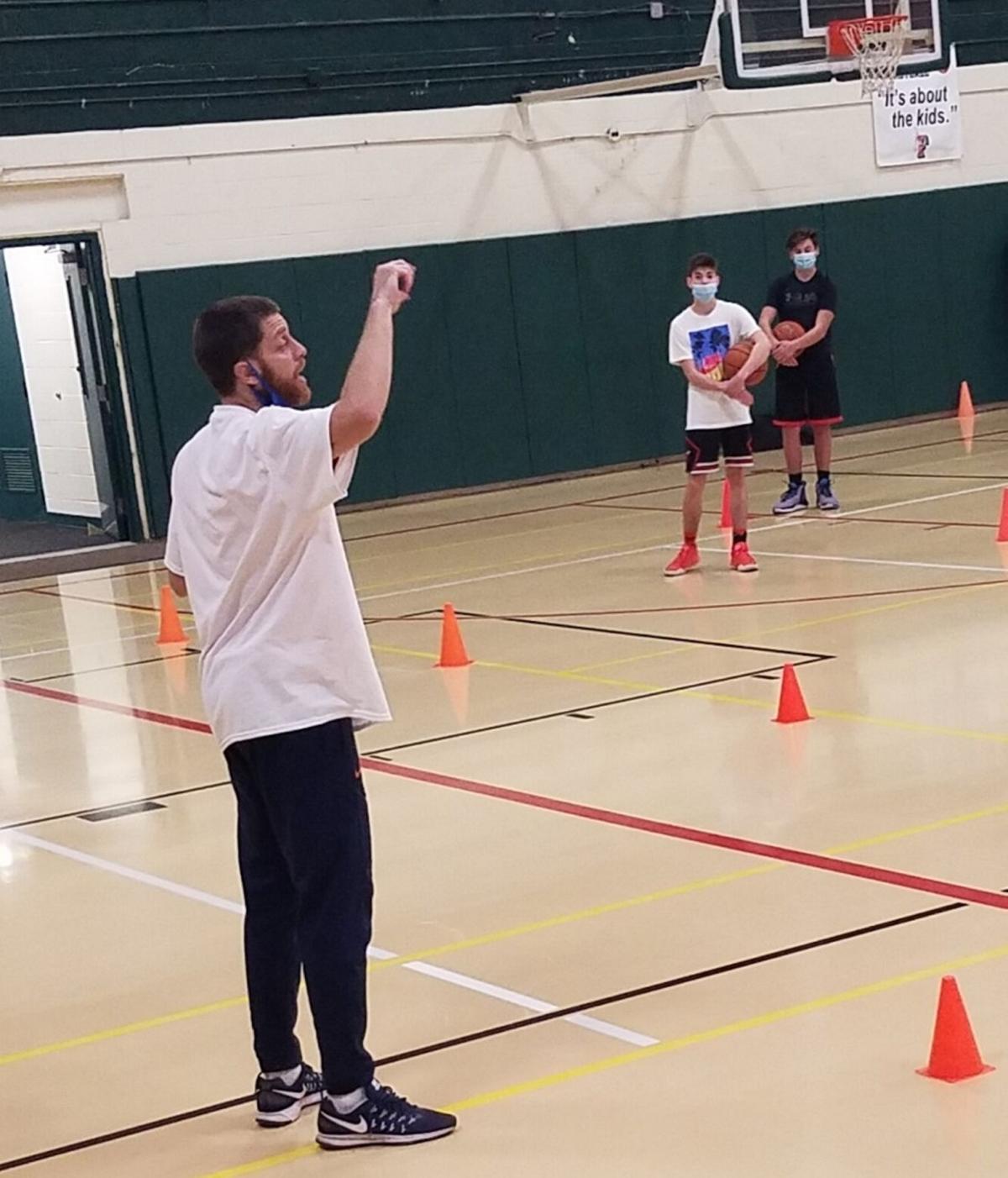 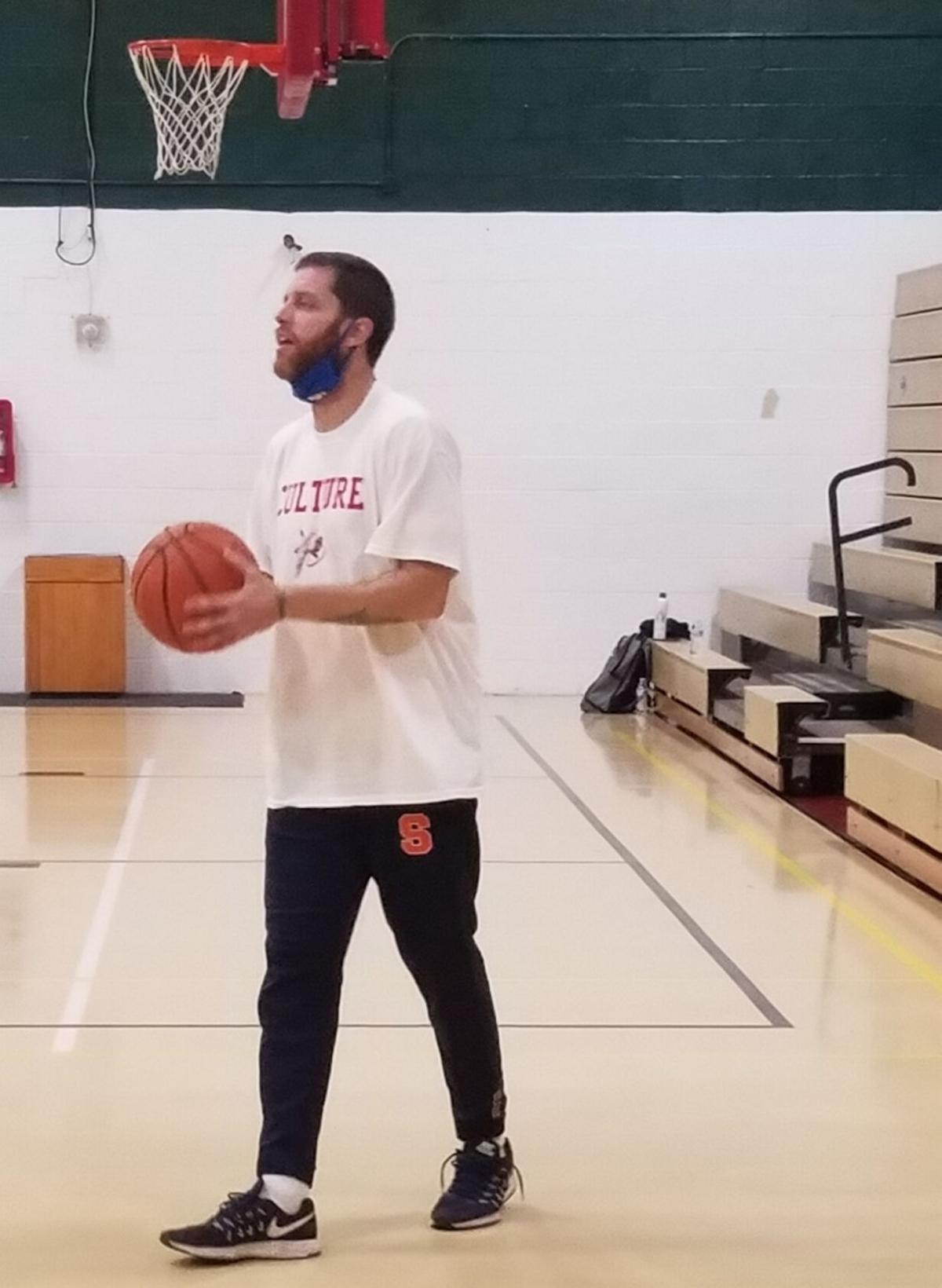 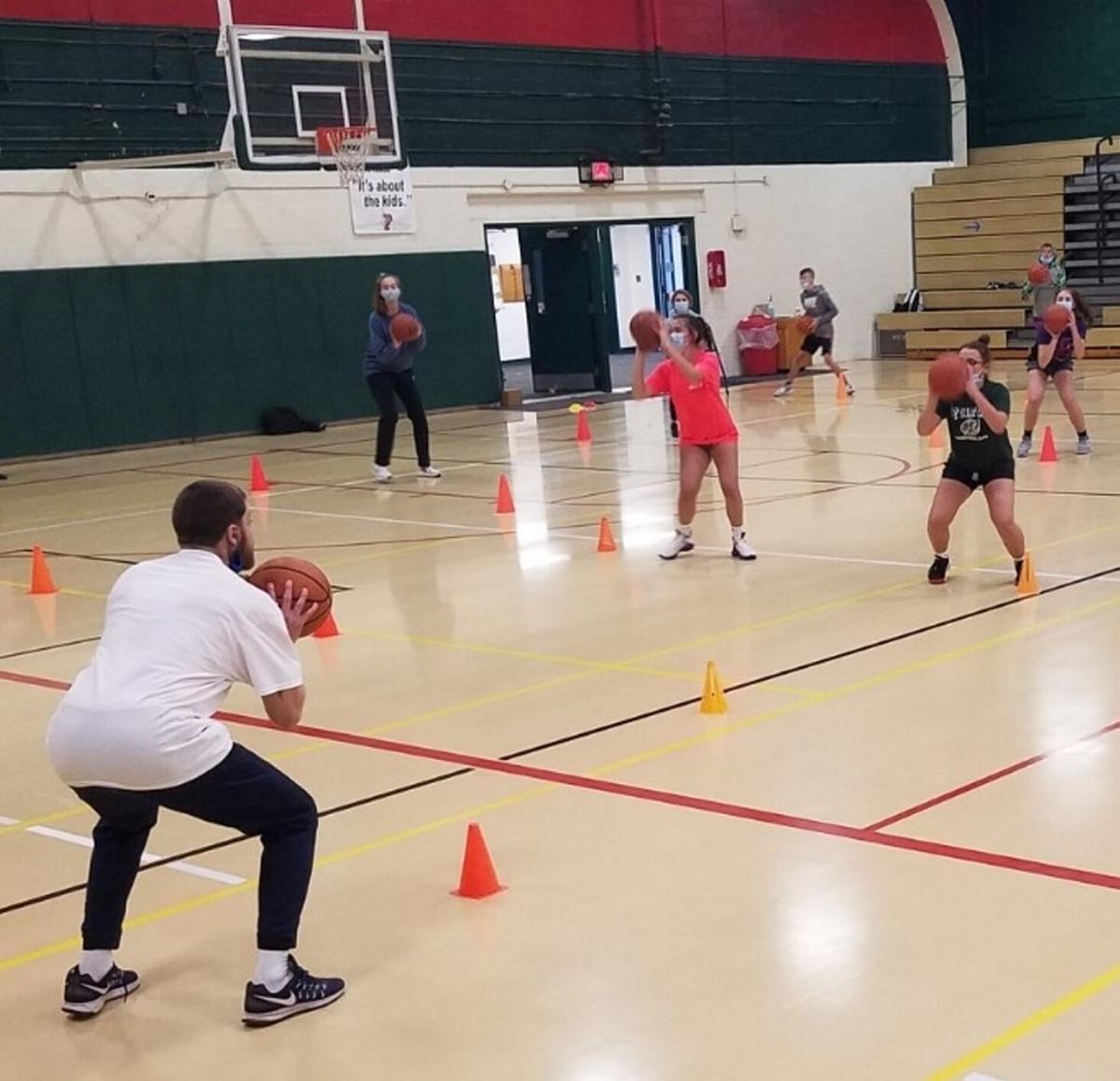 Devendorf conducted a free basketball skills clinic Oct. 28 open to students from kindergarten through 12th-grade at Fulton War Memorial, which was organized by the group of Fulton varsity basketball standouts as a community service project through Americorps.

The student organizers — Dominic Abbott, Jack Broderick, Marcus Shepard, Devon Nicholson, Lexi Patterson, and Alena Wright — also added a philanthropy element by encouraging each participant to bring a canned food good, which was then donated to Catholic Charities of Oswego.

The half-hour skills session for each age group was operated under COVID-19 precautions with players required to maintain distance and wear masks. Participants were placed at separate, spaced-out stations, and not allowed to share or pass balls, which were also sanitized between each use.

Devendorf worked within the guidelines and focused on individual skill development such as ball-handling, moves to get open or set up a shot, and other fundamentals that can be practiced solo. He also spoke of past experiences throughout the allotted time for each group, sharing wisdom from his days as a high school teammate of Kevin Durant at Oak Hill Academy to playing for and coaching under SU Hall of Fame icon, Jim Boeheim, who will soon enter his 45th season as Orange head coach.

“Sports and life go hand in hand, so there are a lot of things you can learn from the two, so I try to sprinkle a little something in here and there about how things translate from the court to their life, and in the meantime, hopefully they can also learn some new basketball skills to take home with them and practice,” Devendorf said.

Devendorf has formed a strong bond to both Fulton varsity basketball coaches — Sean Broderick of the boys team and Derek Lyons from the girls squad — which initially started when the duo attended the Jim Boeheim Fantasy Camp.

He has also connected with various players in the program over the past year while offering his services, most recently via zoom, which prompted their idea to reach out for the free skills clinic.

“Everyone knows who Eric is, he’s a legend in Syracuse basketball, so we thought it would be cool for our project to have him come in and do a clinic with all the different age groups,” Jack Broderick said.

The six Fulton seniors have been working as Americorps team members to provide free area youth basketball opportunities over the last three months at the Fulton War Memorial. They initially started the “Basketball and More,” Americorps program during the summer at the venue and have hosted fall sessions five days per week for an array of age groups under stringent safety protocol.

The senior organizers were excited to see a strong turnout within their cap limits due to COVID-19 after planning for and anticipating the clinic with Devendorf for weeks.

“It was really nice because we saw a lot of kids that have been coming to the Americorps program, and also some new kids, so it’s just nice for everybody to finally be back in a gym,” Nicholson said. “Some people have been doing some workouts through zoom but to actually be doing some things in-person, it felt nice to be back at it.”

Devendorf said that he was thrilled to help provide the outlet for young area athletes who are feeling angst regarding the viability of their upcoming basketball seasons. Fulton postponed all fall sports and the state had yet to make any announcements regarding winter sports plans entering the week.

Fulton high school athletic teams have been dormant since school shutdowns in March for COVID-19.

“There’s not a lot of stuff going on right now, obviously gyms are limited to so many kids and maybe not even being open, so to have something like this for the kids, to get them out and get them active and having them see each other, it’s big to them,” Devendorf said. “For them to be doing something other than school and zoom, it’s big for their mental health to be able to get them out there.”

The event was a success from a charity standpoint, too, as more than 225 canned and boxed food goods were donated to the Catholic Charities food bank along with a monetary donation.

“It was awesome because everybody got a chance to play basketball and the community benefitted from it, too,” Nicholson said. “That’s great because our program was able to coordinate something that is going to help so many people.”

Devendorf closed the last session with a short monologue about handling ups and downs, urging players to discover their passion and work toward their dreams while maintaining positive effort, energy, and attitude even in the worst of times.

Jack Broderick added: “I’ve watched Eric for a long time, and I know that he’s worked hard to get where he is. I know there are a lot of kids in this program who want to play basketball in college, so the speech was good, just telling everyone to work hard and get through the adversity to get there.”

Devendorf starred for the Orange from 2006-09 as a 6-foot-4 shooting guard. He scored 1,680 points, averaging 14.5 per game through his career, and ranks fifth in program history with 208 total 3-point field goals.

Devendorf has been a mainstay of the Boeheim’s Army team in The Basketball Tournament in recent years, still occasionally works with the Orange, and has done radio and other media analyst work covering SU while getting involved in youth coaching.

“I’m happy to help out, just give some of the knowledge back that I’ve learned during my playing years,” Devendorf said. “I enjoy doing it and enjoy seeing the kids have a good time.”