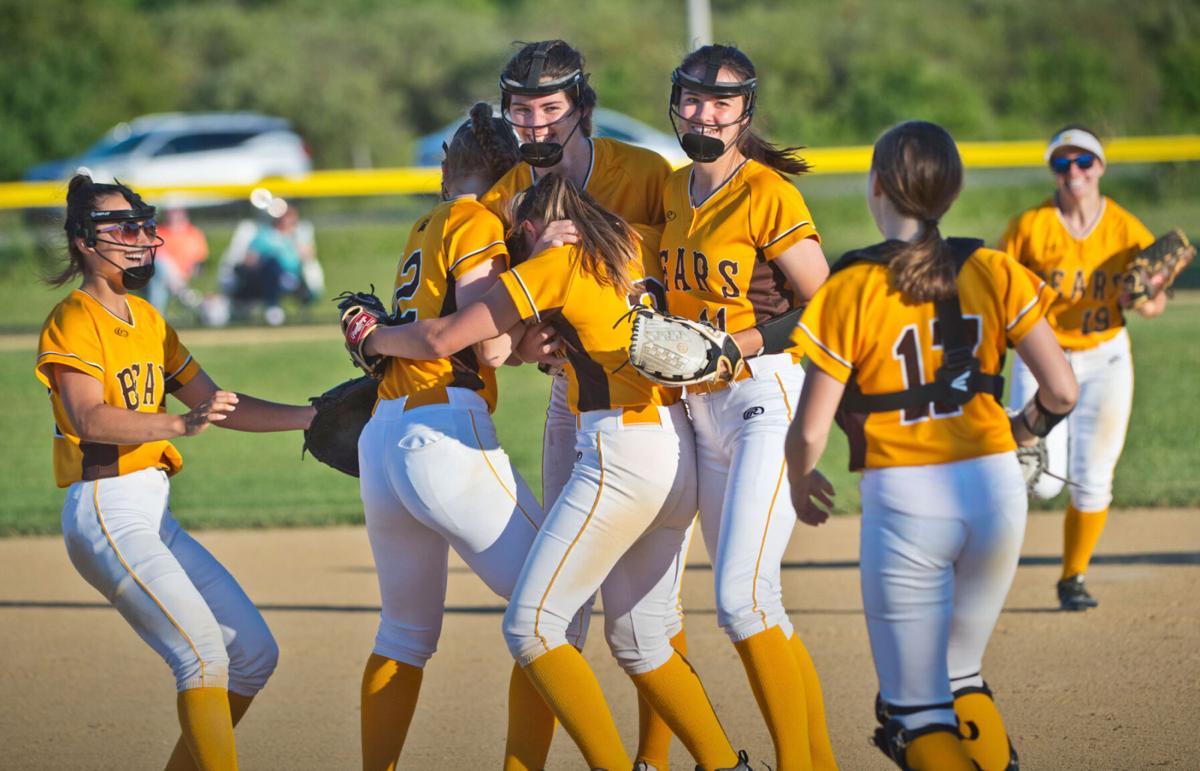 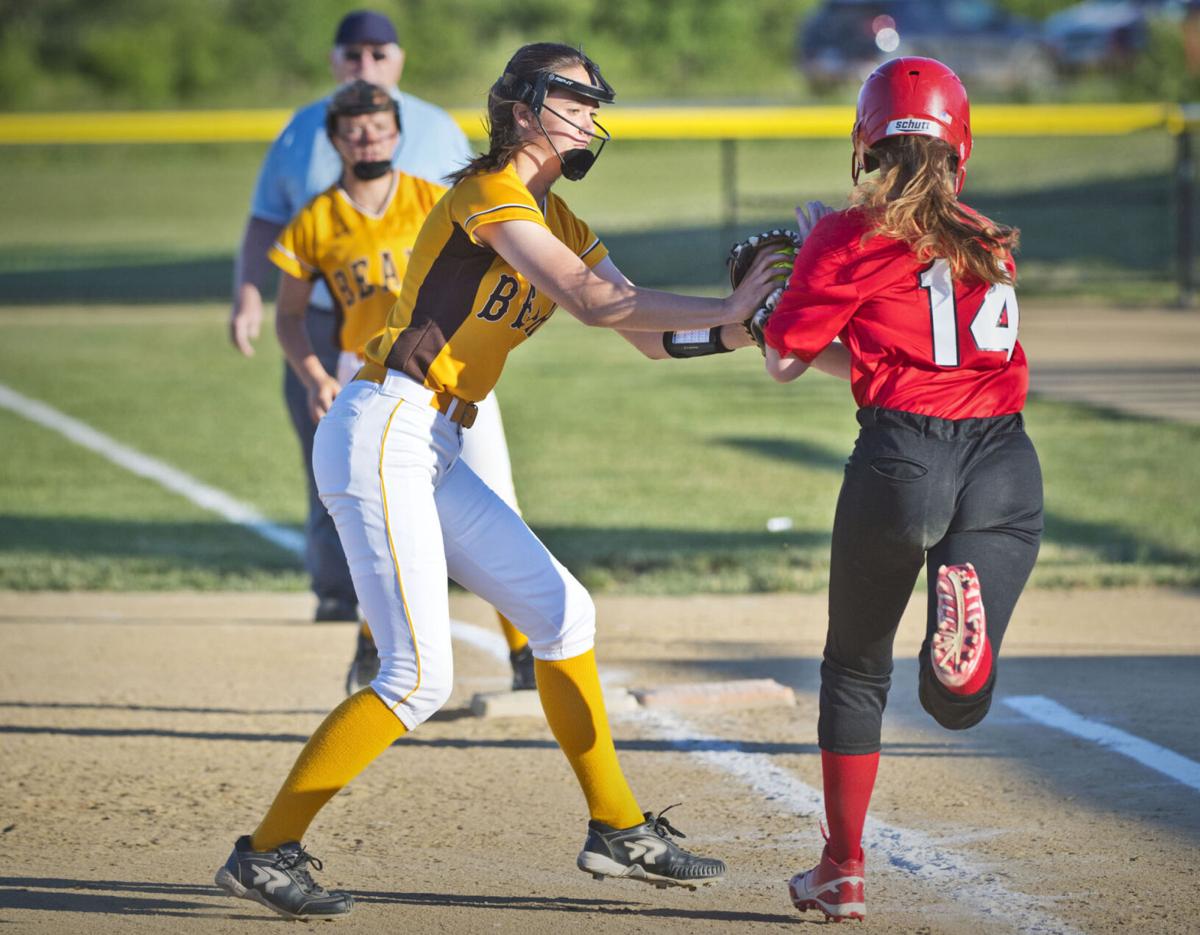 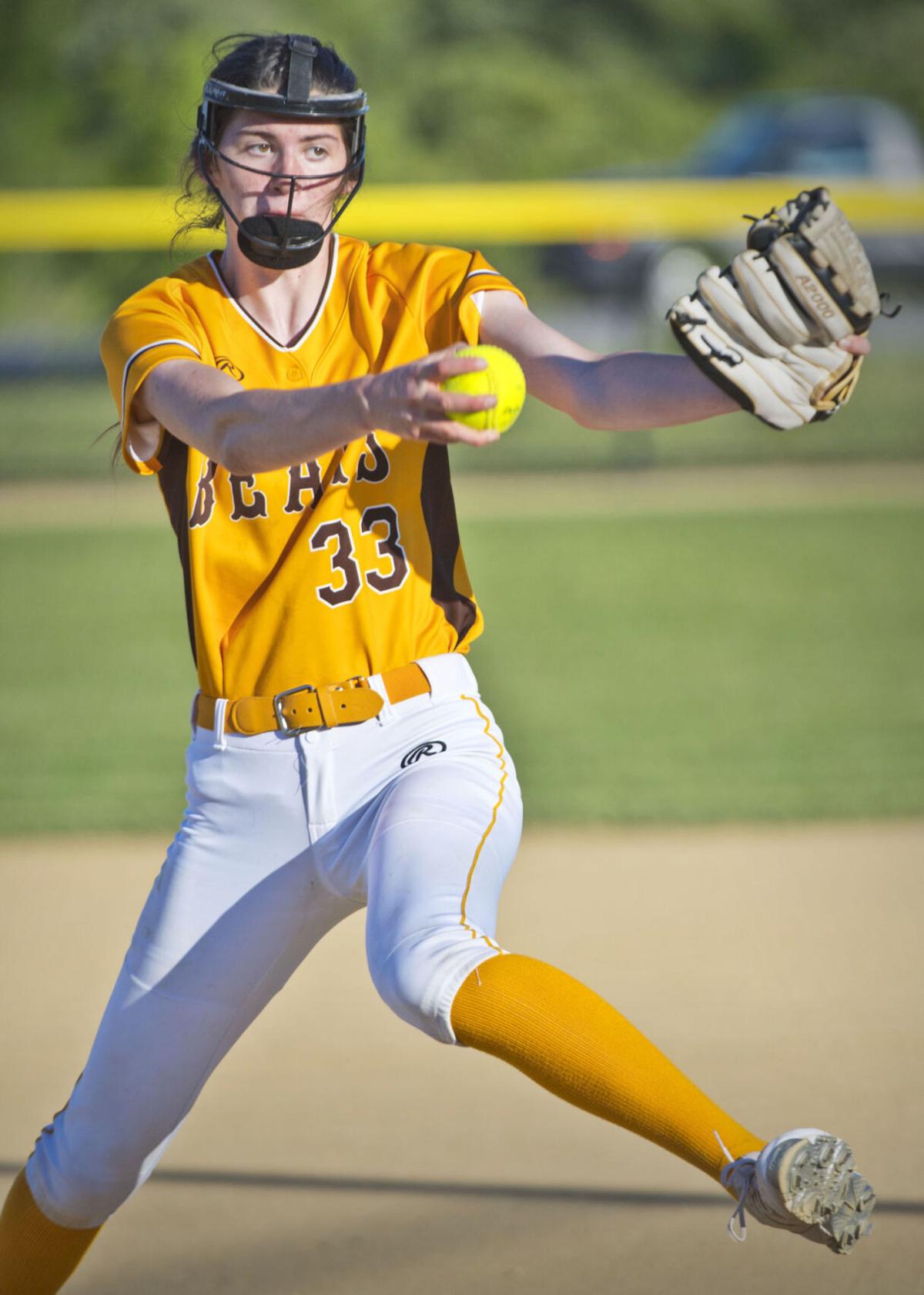 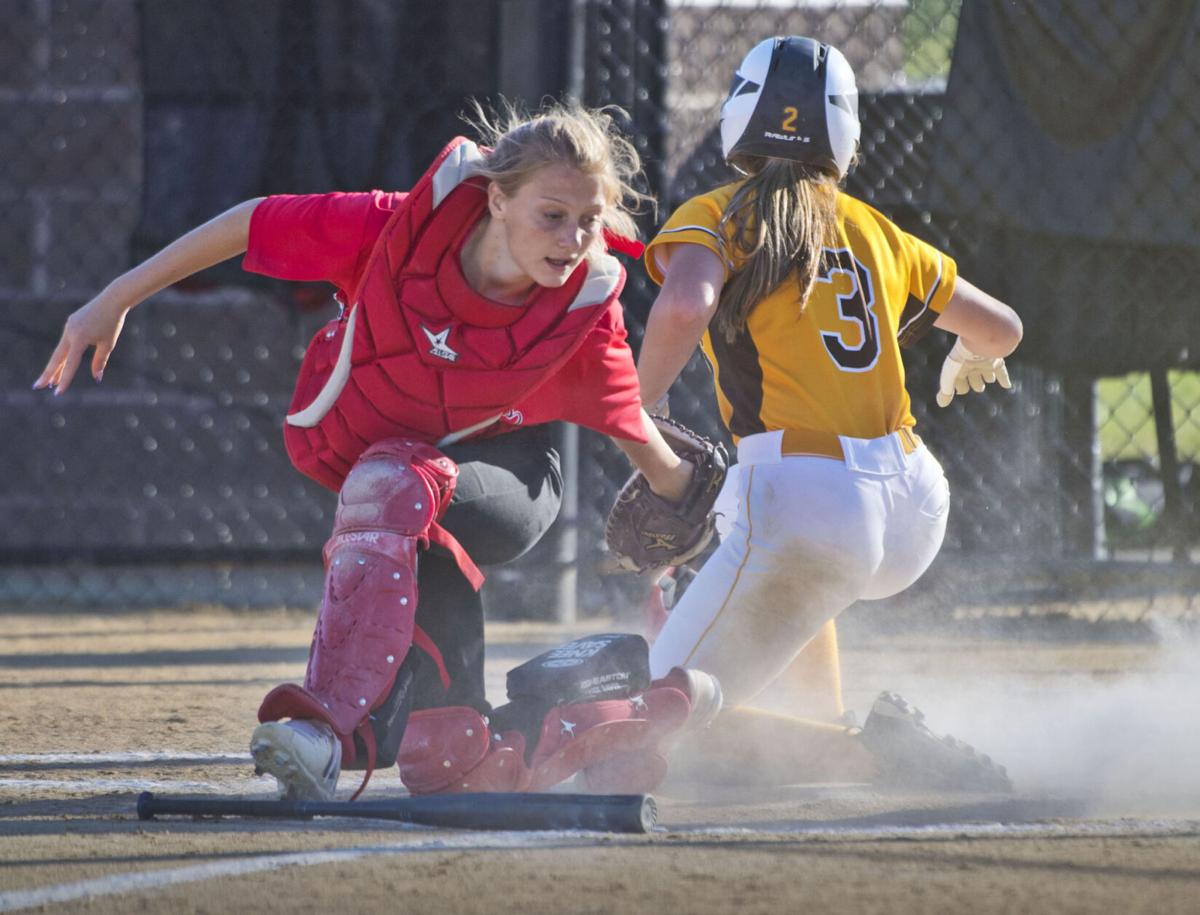 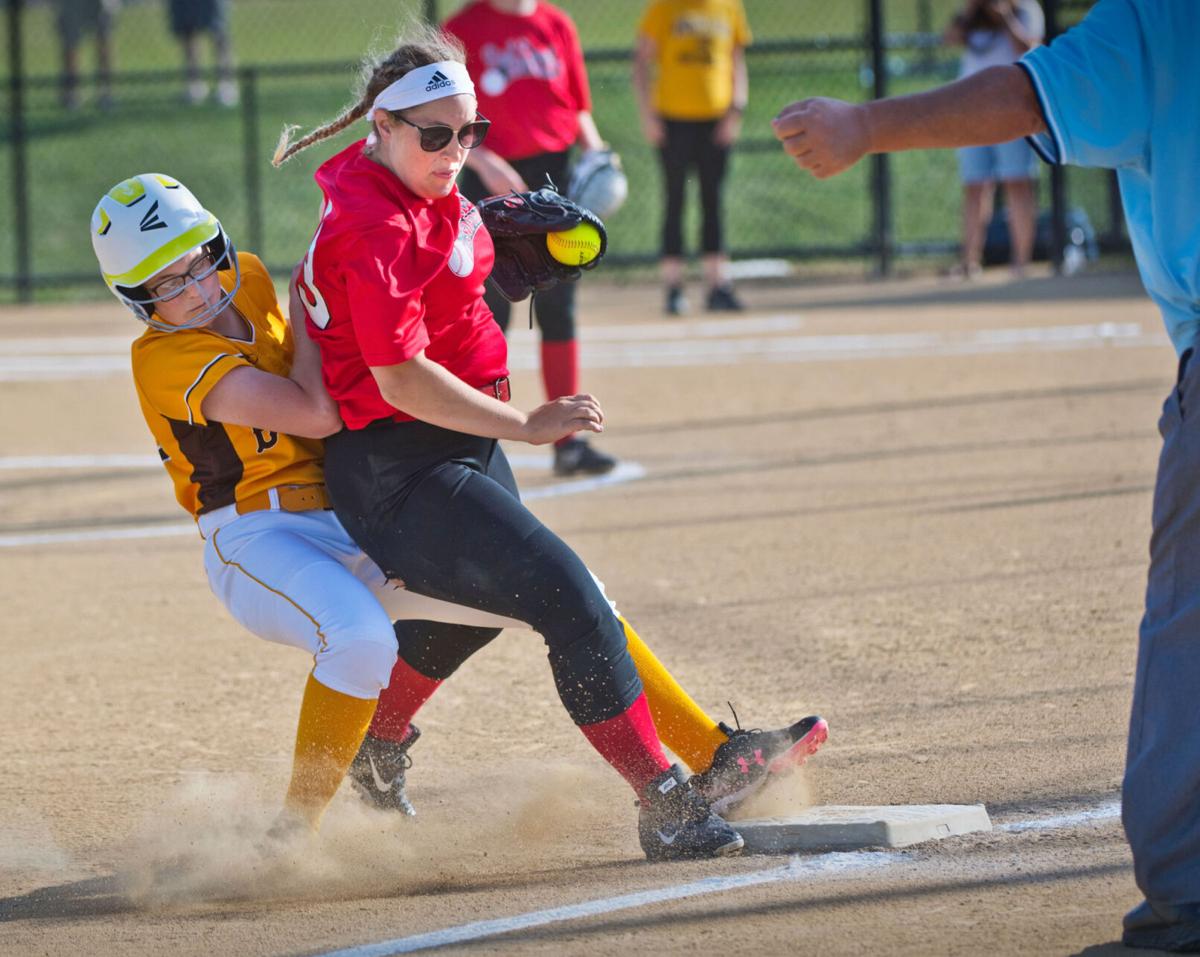 Canton’s Alyssa Jacob gets a foot on third base before Hammond’s Alyvia Crosby can apply a tag in the bottom of the third inning. Christopher Lenney/Watertown Daily Times 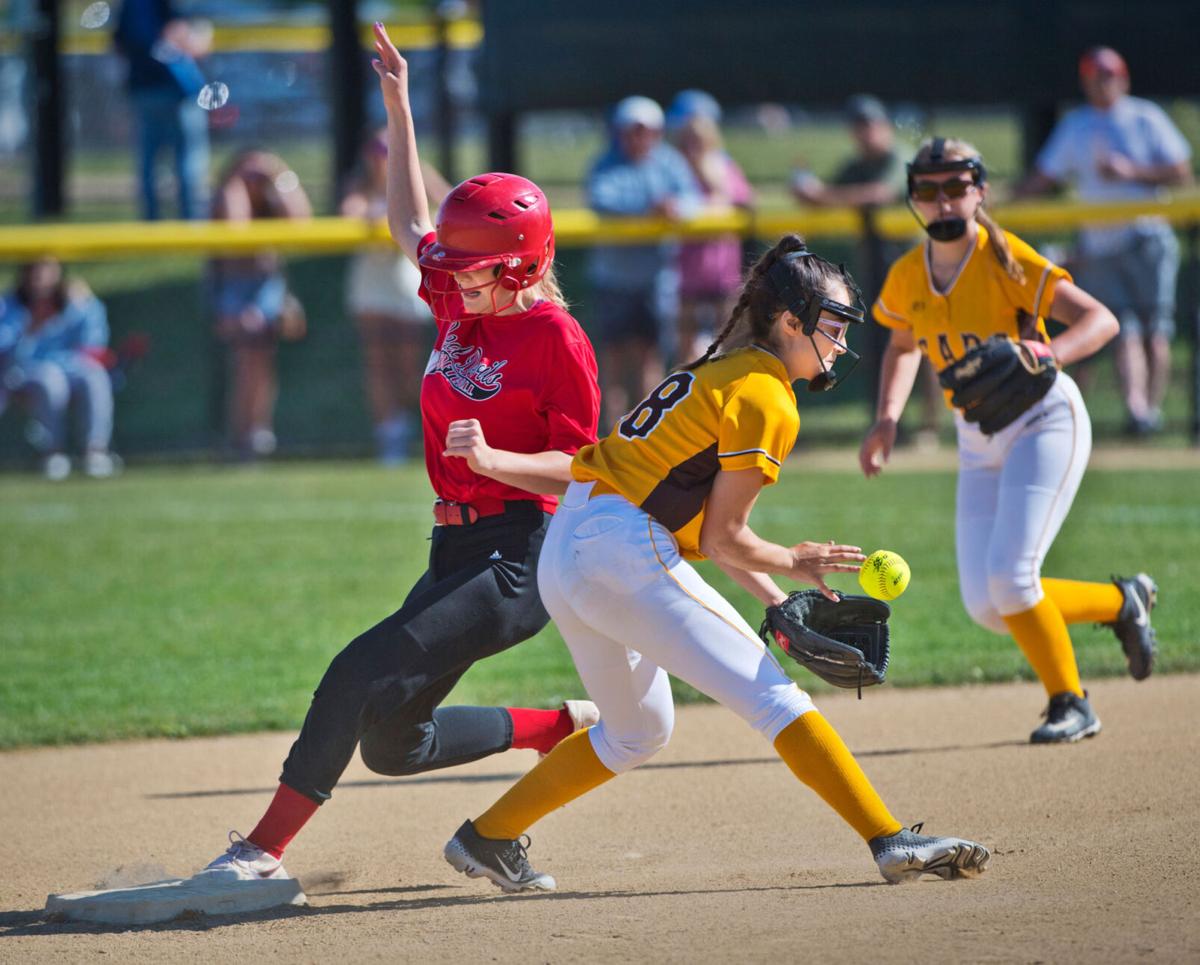 Canton’s Alyssa Jacob gets a foot on third base before Hammond’s Alyvia Crosby can apply a tag in the bottom of the third inning. Christopher Lenney/Watertown Daily Times

But Canton rallied from a six-run deficit and then dominated Class D champion Hammond to come away with a 17-6 win.

“This is how everyone wants to end their career,” said Canton senior Lexi Huiatt, who won the prestigious David “Huffer” Gebo Award after the game. “Who can say they won their last career game in softball? It’s pretty great. To have no state tournament this year, I think we would have done well in that, this is the next best thing.”

The Class B champion Golden Bears (21-2 overall) gave up two runs in each of the first three innings and made five errors in that span to help Hammond build a 6-0 edge.

Canton rallied from a deficit Wednesday as well, beating Class C champion St. Lawrence Central, 5-4, after falling behind 3-0 in the top of the first inning in a semifinal.

“We couldn’t have played a worse two innings,” Canton coach Mike Wentworth said. “We had five errors. I was trying to stay as positive as I could. Then they chipped away. I was beginning to think, ‘What was I going to tell them at the end of the game?’ We played pretty good the last four innings.”

Freshman Ava Hoy, who is 6-foot-3 and started the season on the junior varsity team, turned things around for the Golden Bears offensively and in the pitching circle.

Hoy, Canton’s ninth hitter, led off the third with a double to center field, the first hard-hit ball of the game for the Golden Bears.

“I think that really sparked it,” Huiatt said of Hoy’s double. “After she got up and hit that double we all just thought, ‘We can hit the ball. We can do this.’ After that we started rolling.”

Hoy started the game at first base, but after her hit Wentworth inserted Alyssa Jacob as a courtesy runner, and Hoy headed to a field behind the main softball facility to start warming up.

Her doubled sparked Canton to a five-run inning, cutting the Hammond lead to 6-5.

Huiatt followed the double with a single past third base. Sydnee Francis singled to right and starting pitcher Hadley Alguire singled to left. Natalie Warner followed with another single before Hammond (14-4) finally got out of the inning.

Hoy came in to pitch the top of the fourth and walked her first batter, but then set down seven straight Hammond hitters, a streak broken by a bunt single from Hailey Cunningham in the top of the sixth.

“It’s been kind of (a crazy) season,” Hoy said. “It’s just been a lot of fun. I was excited and nervous at the same time. Once I got going I had faith in my teammates.”

Hoy struck out eight over the final four innings, with five coming on called third strikes.

“She was really confident and I knew she would just come in and rip it,” said Canton catcher Cate DeCoteau. “I was really excited for that. I knew it was going to be good. Ava has speed.”

Canton added to its big third inning with four more runs in the fourth to go ahead 9-6. The Golden Bears took advantage of three errors in that inning.

Canton scored six runs in the fifth to extend the lead to 15-6, taking advantage of four hits, a walk and two errors.

Class A Massena (15-2) made it look easy capturing the first Section 10 overall title game staged since 1985 with a win over Class B champion Gouverneur (15-2) at Canton.

Senior David Dubray followed up a shutout over Malone by striking out 11 in a three-hitter while limiting Gouverneur to one unearned run. Dubray went into cruise control after Chris Paige lead off the bottom of the first inning with a triple and scored for the second straight game and then singled in a seven-run second inning against Gouverneur starter Kyle Gaumes.

Paige went 3-for-4 with a triple and two singles. Many of the Raiders played together for years led by Paige as a five-year varsity player and Dubray, who played three years on the varsity.