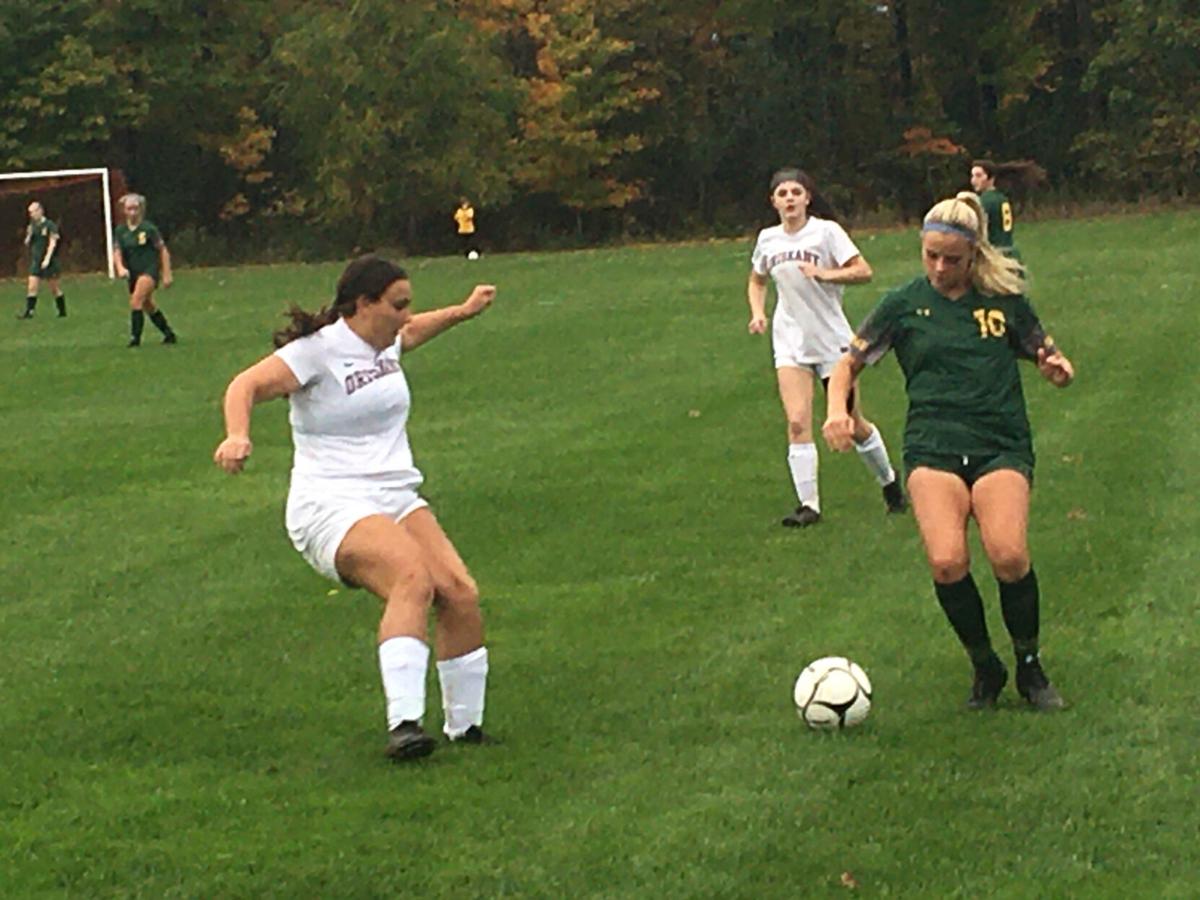 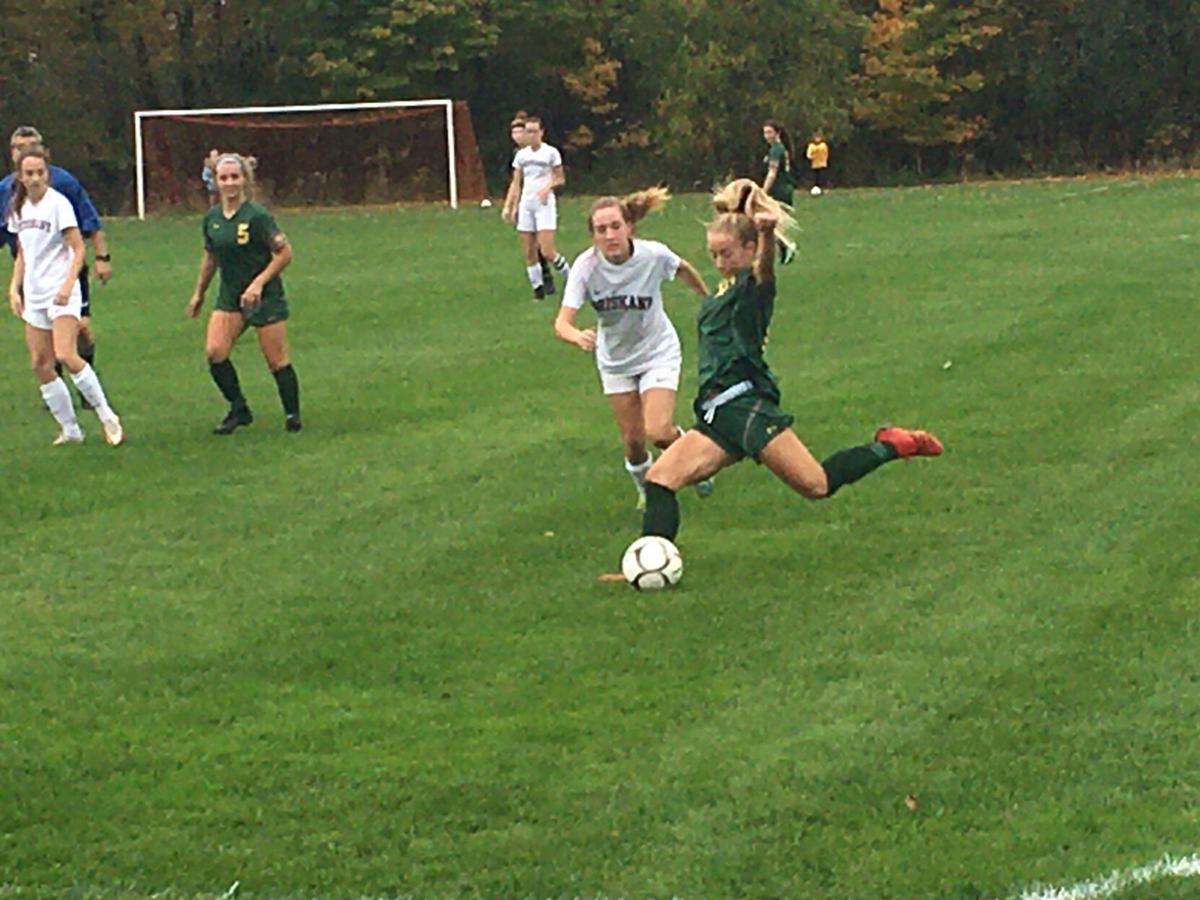 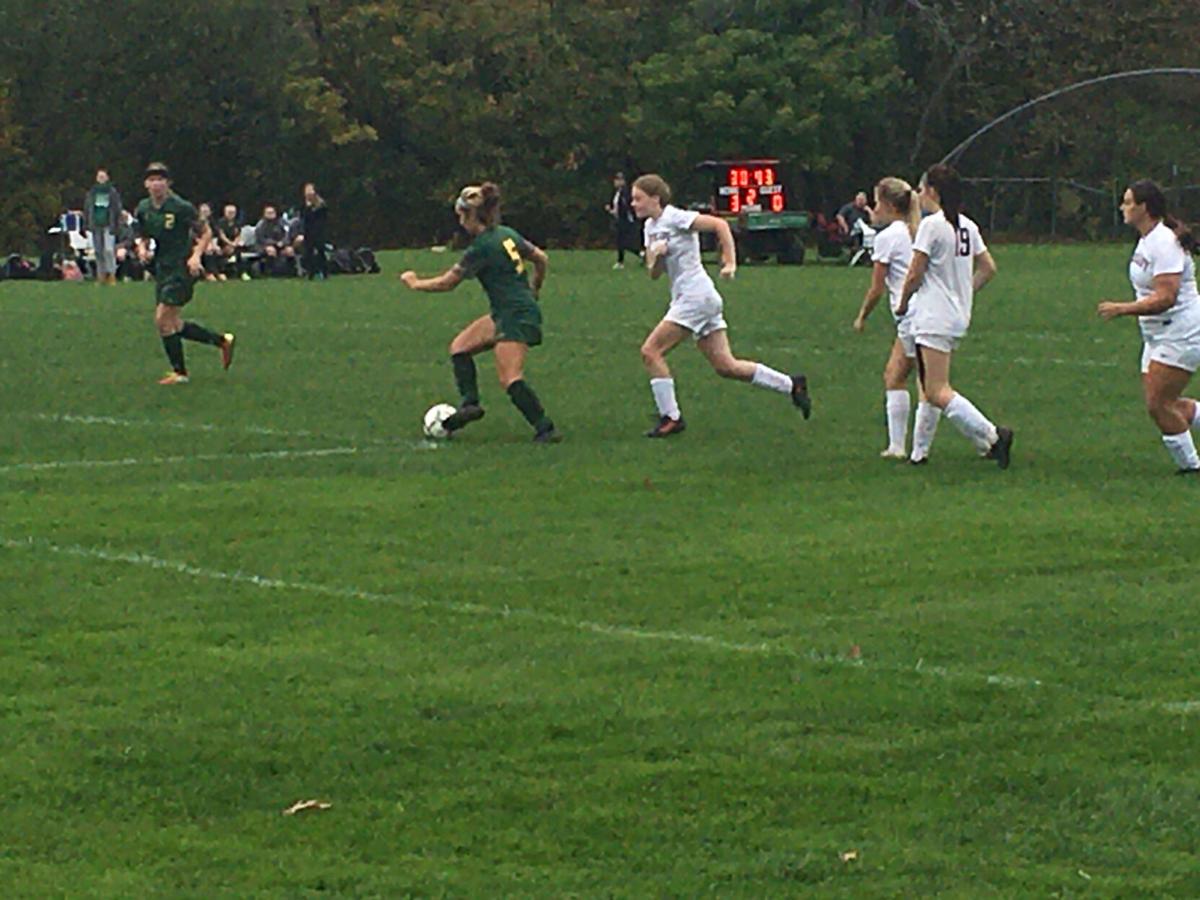 Lyme forward Miranda Bearup dribbles toward the goal in a Section 3 quarterfinal versus Oriskany on Thursday. Dan Mount/Watertown Daily Times

Lyme forward Miranda Bearup dribbles toward the goal in a Section 3 quarterfinal versus Oriskany on Thursday. Dan Mount/Watertown Daily Times

Callie LaFontaine netted a hat trick and Natalia Ososkalo supplied a goal and an assist as fourth-seeded Lyme (16-1) downed No. 5 Oriskany, 6-0, on Thursday afternoon. Goalie Kaitlyn Weston made two saves as the Indians kept the majority of the possession.

Lyme had given up the first goal a few times in recent games, but came out of the blocks fast against the Redskins (10-7).

“I think it (the good start) got us pumped and got us into a good place mentally,” LaFontaine said.

LaFontaine helped Lyme break through in the 12th minute and once again just over two minutes later. The senior is the Frontier League “D” Division’s top scorer coming into the game with 26 goals and 13 assists for 65 points.

“She’s just an all-around good player,” Ososkalo said. “Not only has she been training for so long, she’s got such a great attitude and helps us out.”

Oriskany goalie Kaylee Burnop made 11 saves and kept her team in the game, including a series of saves at the end of the first half, before Antonia Bruno gave Lyme a 3-0 lead with 55 seconds left.

Lyme coach Mary Guyette told her players to keep up the pressure.

“Coach Guyette tells us to keep shooting because eventually those will go in,” LaFontaine said.

The Indians also contained Redskins’ leading scorer Maddie Denison, who entered with 29 goals and six assists, with double teams and tight marking. She scored twice in Oriskany’s 4-3 double-overtime, first-round win over No. 12 Sackets Harbor, which gave its division rivals a scouting report Tuesday.

“We knew that she was a really a good goal-scorer and we needed to defend well,” Guyette said. “I thought (junior defender) Malena Stevenson did an outstanding job on her.”

LaFontaine finished her hat trick under 13 minutes into the second half. She then assisted on the Ososkalo goal that gave the Indians a 5-0 lead. Summer Reichert completed the scoring with her first varsity goal to cap a stretch of three goals in less than five minutes.

Lyme has gotten scoring from multiple sources like LaFontaine, Ososkalo, Miranda Bearup and others. Guyette said that having goals from different places is a boon to the team.

“To have multiple scorers is huge,” Guyette said.

It was Lyme’s first home sectional game since it beat Oriskany, 7-2, almost two years ago to the day in a Class D first-round game. The Indians sat out the entire 2020-21 school calendar and didn’t participate in the Fall Sports II window due to COVID-19 pandemic.

“We’ve been all really waiting for this (a home sectional game),” Ososkako said. “I was really sad that I didn’t get to play with older sister (Olivia) last year.”

Lyme now faces top-seeded Bishop Ludden, which edged Copenhagen, 1-0, in a semifinal at 5 p.m. Wednesday at South Jefferson. Afterward, the Indians were hoping to get some practice time on a turf field to get used to the likely playing surface.

Elizabeth Gaughn’s goal helped the top-seeded Gaelic Knights edge the No. 8 Golden Knights in a Class D quarterfinal at Syracuse.

Alexis Bates totaled four goals as the second-seeded Tornadoes topped the No. 7 Panthers (9-6-1) in a Class D quarterfinal at Poland.

Logan Cookinham generated three goals and four assists for Poland (17-0), which takes on No. 3 Cincinnatus in a semifinal Wednesday at Vernon-Verona-Sherrill.

Kat Probst and Kailey Montgomery each scored three goals as the second-seeded Cavaliers routed the No. 7 Black Knights (7-8) in a Class C quarterfinal at Watertown.

Alyssa Shepherd logged four goals and two assists as the top-seeded Indians blanked the No. 16 Falcons (8-9) in Sauquoit.

Hannah Smith scored just over midway through the second overtime as the fourth-seeded Warriors outlasted the No. 5 Cyclones in a Class A quarterfinal at Marcy.