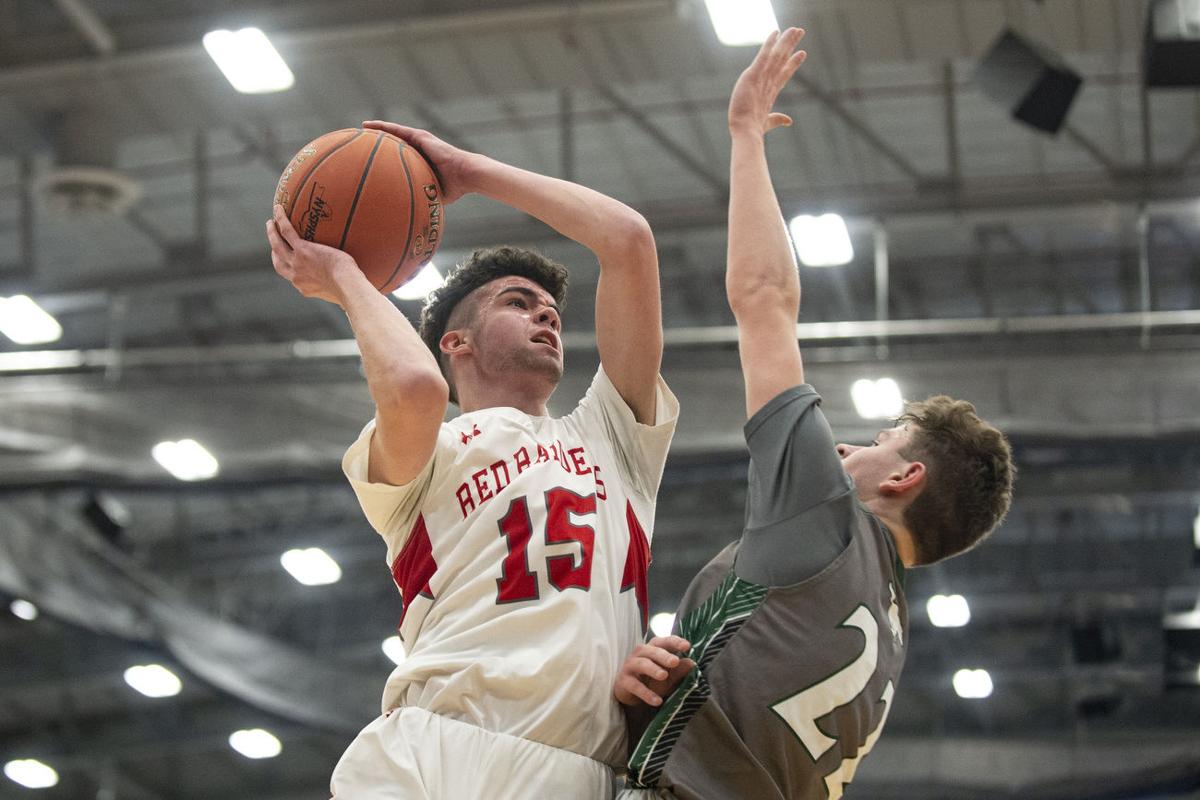 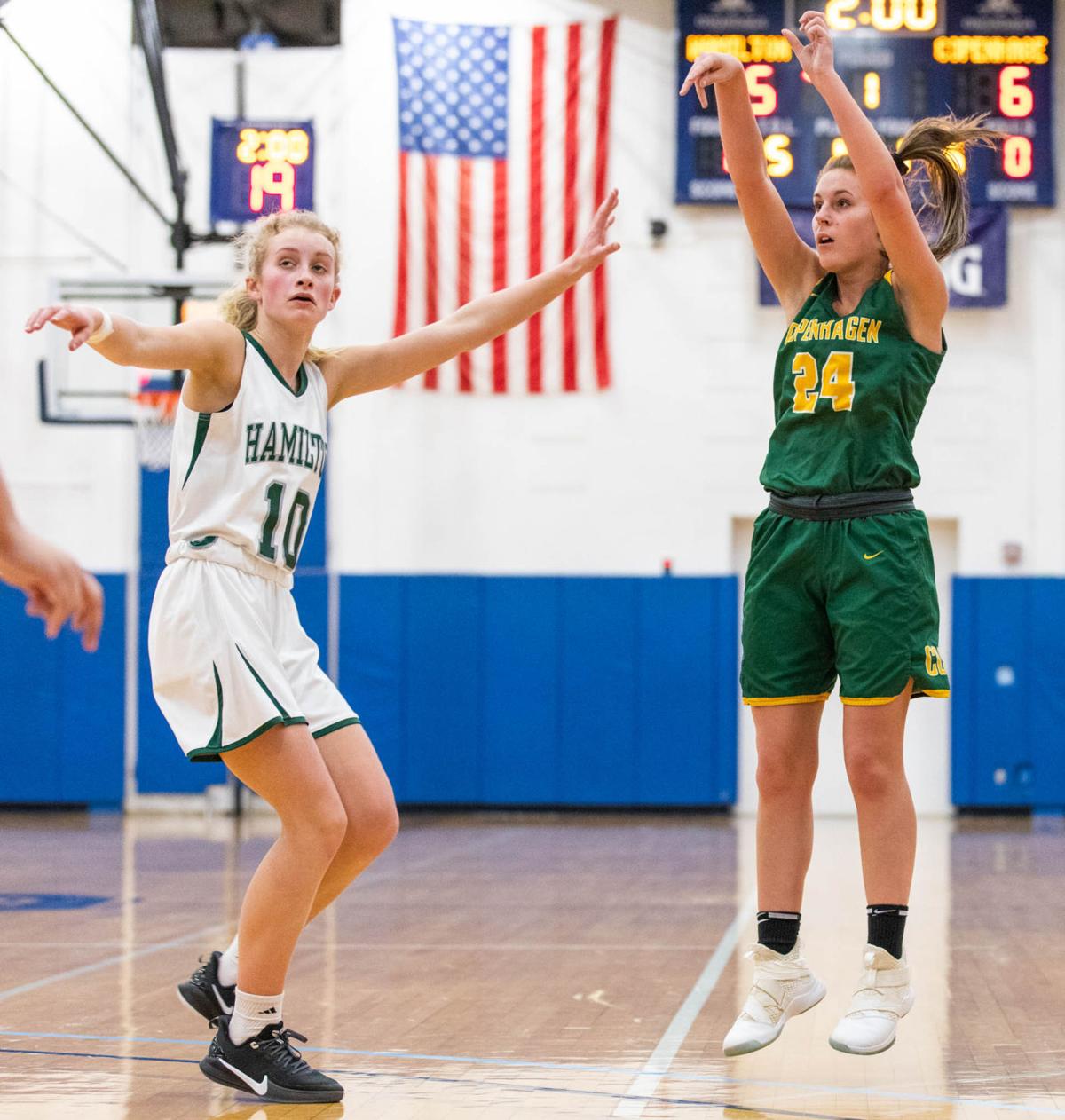 Copenhagen’s Morgan Smith, right, follows through on a jump shot as Hamilton’s Lindsey Speer attempts to block her shot Sunday during the the Section 3 Class D semifinal at Onondaga Community College. Copenhagen will play Brookfield in the final. Sydney Schaefer/Watertown Daily Times 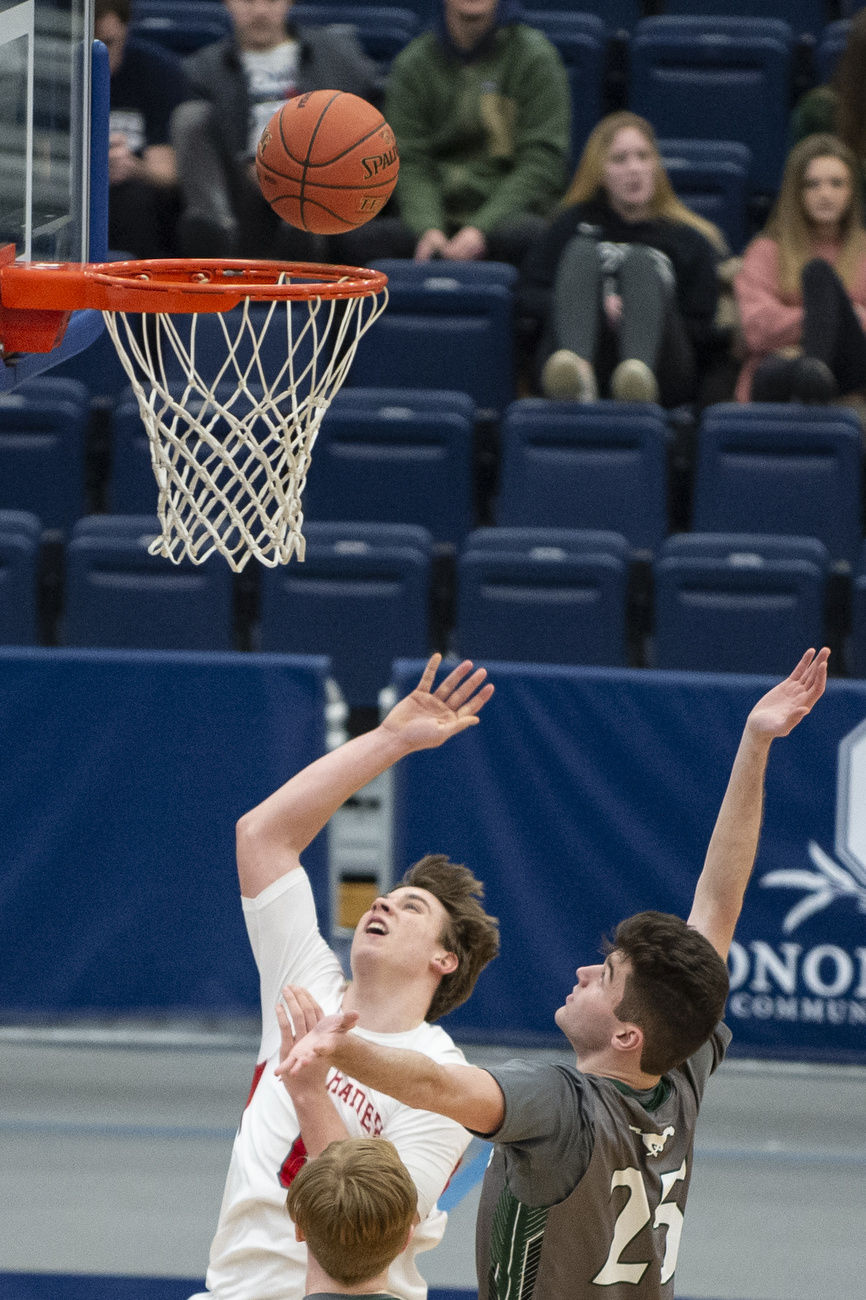 Lowville senior Chad Bach attempts a shot in the paint during the Section 3 Class B semifinal against Marcellus at SRC Arena at Onondaga Community College on Saturday. Emil Lippe/Watertown Daily Times 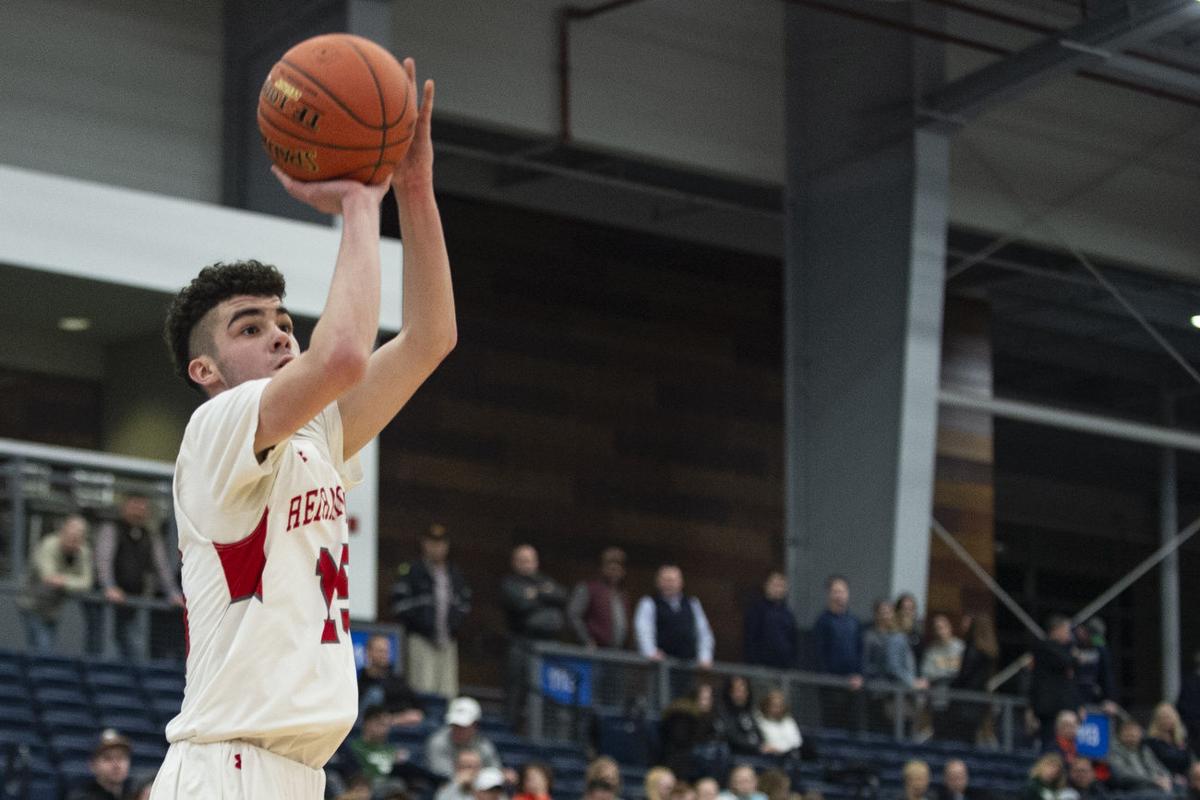 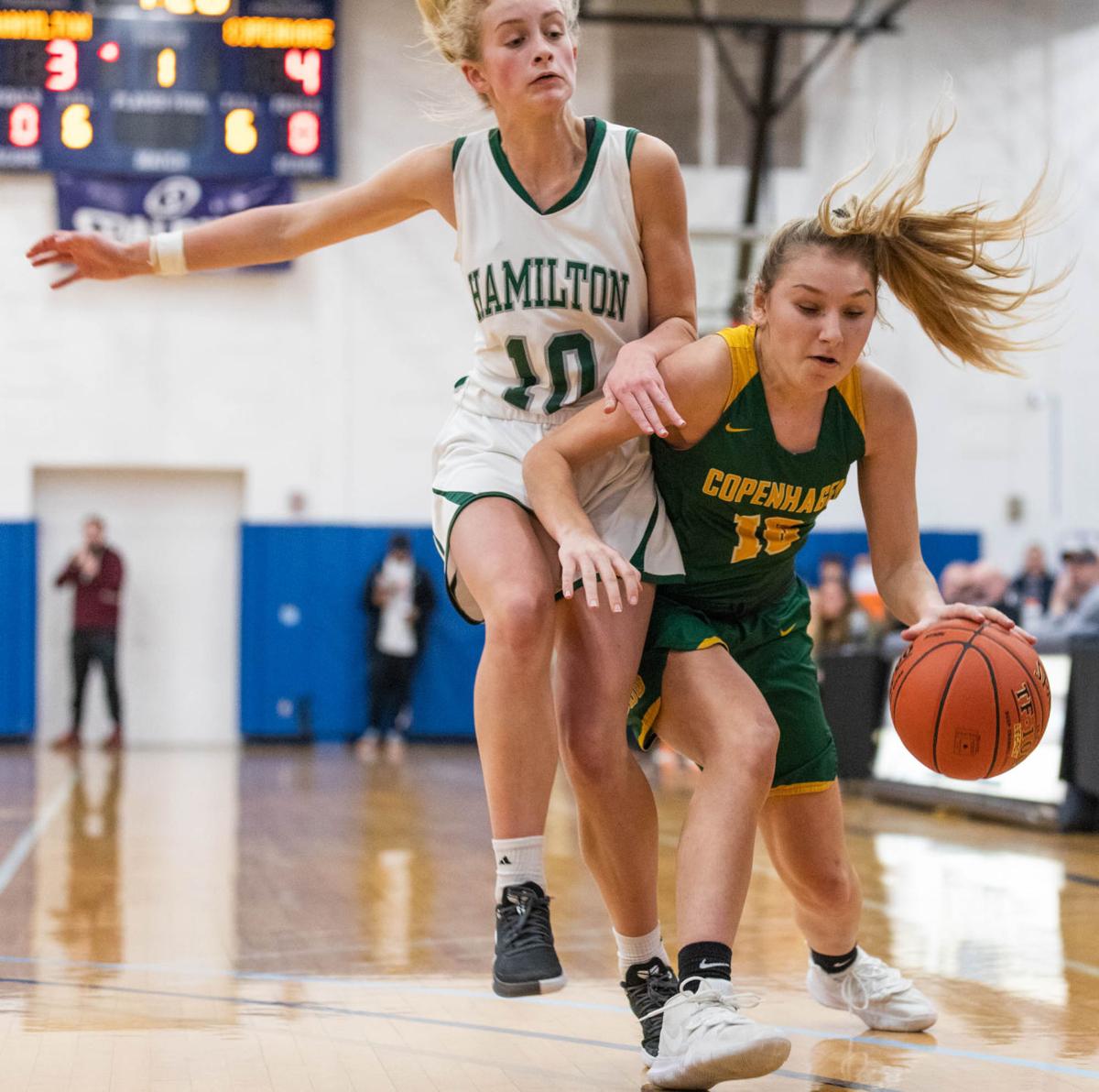 Copenhagen’s Morgan Smith, right, follows through on a jump shot as Hamilton’s Lindsey Speer attempts to block her shot Sunday during the the Section 3 Class D semifinal at Onondaga Community College. Copenhagen will play Brookfield in the final. Sydney Schaefer/Watertown Daily Times

Lowville senior Chad Bach attempts a shot in the paint during the Section 3 Class B semifinal against Marcellus at SRC Arena at Onondaga Community College on Saturday. Emil Lippe/Watertown Daily Times

The top-seeded Lowville boys basketball team, trying to return to the state championship, will play No. 2 Solvay in the Class B game, while the second-seeded Lyme boys will have a rematch against No. 1 DeRuyter in Class D game.

No. 2 South Jefferson girls will play No. 13 Bishop Grimes, which knocked off No. 1 Oneida in the Class B semifinal. And No. 3 Copenhagen will play No. 1 Brookfield, which narrowly avoided being upset by No. 4 Lyme last week in the semifinal round.

All games will be played at Onondaga Community College. The boys games are at SRC Arena while the girls games are in Allyn Gym.

Neither No. 1 Lowville nor No. 2 Solvay had to sweat much during their last Saturday’s semifinals.

The top two seeds in the boys Class B bracket will face off at 4 p.m. Saturday.

Lowville hasn’t really had to work hard much at all this postseason. The Red Raiders (21-1), who have been ranked first in the state since Jan. 21, have defeated each opponent by at least 15 points in the three games they’ve played in sectionals.

Solvay’s path has been similar, after avoiding a massive upset to No. 18 Oneida with a four-point win, the Bearcats have defeated Skaneateles and General Brown by 20 points each.

Lowville has yet to play Solvay (19-4) this season, but the two teams have been considered the best Class B teams in Section 3 for much of the season.

Part of Solvay’s strength is its experience. Ten of the 12 players on Solvay’s postseason roster are seniors. This includes Brock Bagozzi (14.8 points per game), Elijah Wright (13.0 ppg) and Justin Scott (12.8 ppg). Scott, who had missed more than a month before playing in the sectional semifinal game, was particularly effective against General Brown. He finished with a team-high 19 points and knocked down three 3-pointers.

Solvay’s experience matches Lowville’s, which could help the Bearcats maintain their poise when Lowville tries to go on a run.

But then again, nothing can really stop the Red Raiders when they’re on a run, as shown in their semifinal against Marcellus.

The Red Raiders’ second quarter last Saturday exhibited how quickly they can turn a game that they’re trailing in, to one where they’re leading by more than 10 points.

Lowville will need to avoid getting into foul trouble and while that hasn’t necessarily been a problem, it’s still something coach Zach Shambo is mindful about, particularly with forward Chad Bach.

For a hot second last Sunday, it looked like the South Jefferson girls wouldn’t get a chance to defend its sectional title and avenge its state tournament defeat.

After scoring only three points in the third quarter, Marcellus outscored South Jefferson 23-10 in the fourth quarter and at one point tied the game.

The Spartans (21-2) persevered and prevailed though. That was about the only thing Spartans coach Michelle Whitley was happy about following the victory.

South Jefferson advanced to play Bishop Grimes in the girls Class B championship at 7 p.m. Saturday.

Jackie Piddock led the scoring with 24 points, including three 3-pointers, all of which came in the first quarter. While her talent with the ball in her hands helped jump-start the offense early and close out the game late, her poise helped keep the team together when the game was suddenly tied with a minute left to play.

“I tend to stay calm, but I know with some personalities on the team, in the moment, everyone is so amped up and the adrenaline is going,” Piddock said. “I think it’s good to have someone else, or me, say it’s still a game, just relax, we’ve done this before, we’re fine.”

On Saturday night, South Jefferson will face No. 13 Bishop Grimes (15-9). Despite their seed, the Cobras’ appearance in the title game shouldn’t come as a huge surprise given its competition.

This season, the Class B school played 11 games against Class A or AA opponents, and seven of their nine losses came against either Class A or AA teams.

Against No. 1 Oneida on Sunday, Bishop Grimes kept it close before taking a five-point lead late. Naywel Ayeil led the Cobras with 20 points.

The second-seeded Indians’ top two players have come up clutch in the final moments of the tournament, and because of their performance, Lyme (21-1) will attempt to capture its second consecutive section title.

Again, DeRuyter stands in Lyme’s way at noon Saturday. Last season the Rockets were the No. 2 seed with Lyme being No. 1, but this year the roles are reversed. Top-seeded DeRuyter (23-0) hasn’t lost a game since its season-ending defeat in last year’s sectional final.

Even with arguably a better team than last year’s, the Indians have nearly been eliminated twice in this tournament.

Lyme coach Leo Wilson attributes the close calls to stronger opponent and Lyme adapting to playing better opponents, something the Indians didn’t do for most of the year.

A key part to Lyme’s win over Old Forge on Monday was Tyler Wilson’s performance. The senior forward has performed from the perimeter all season, leading the Frontier League in 3-pointers with 75.

Against the Eskimos, he knocked down five and finished with team-high 20 points. Opening him up so he can take those shots was key.

“I think we changed some things as far as trying to set more screens for Tyler to get him open,” Leo Wilson said. “Just the movement helped him.”

DeRuyter will play a 2-2-1 press to try and limit Lyme. However, having seen a similar defense from the Rockets last season, the Indians feel prepared for it.

“I think this year we have more guard strength,” Leo Wilson said. “We have more guys who can handle the ball better than we did last year, so I’m hoping that helps us break the press.”

Going up against No. 2 Hamilton, third-seeded Copenhagen was supposed to be the lesser team. But the Golden Knights’ 67-32 victory proved that the seed doesn’t really matter.

So, with Copenhagen (20-2) going up against No. 1 Brookfield (22-0) at 3 p.m., it’s fair to think that the Golden Knights have a good chance at repeating as the Class D champion.

Copenhagen can play a similar punishing defense while also being able to stuff the paint with towering forwards Charli Carroll and Raegan Dalrymple.

Against Brookfield, one of the bigger Class D teams, that size will play a significant role.

“We’re just going to stick to our regular game plan, we’re going to play how we play and that’s pushing it, we push it,” Scott said. “We know when to settle back. too, or at least we’re getting better at that.”

Copenhagen has a ton of strengths, but its biggest is the versatility of its players.

Each of their past four games has featured a different lead scorer, with Carroll being the most recent, scoring 16 points against Hamilton.