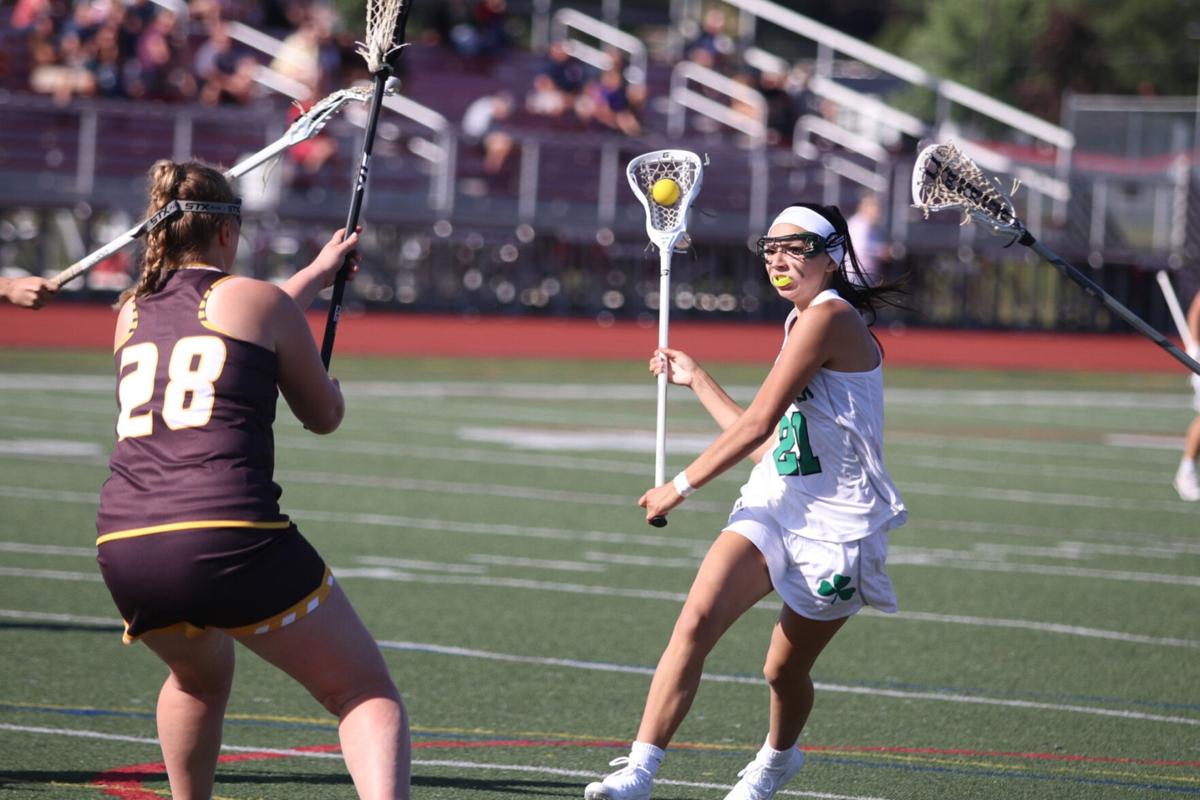 Salmon River midfielder Paisley Cook makes an in-cut between Canton defenders while in possession of the ball. Cook finished with a game-high seven goals and two assists. Evan Wheaton/Malone Telegram 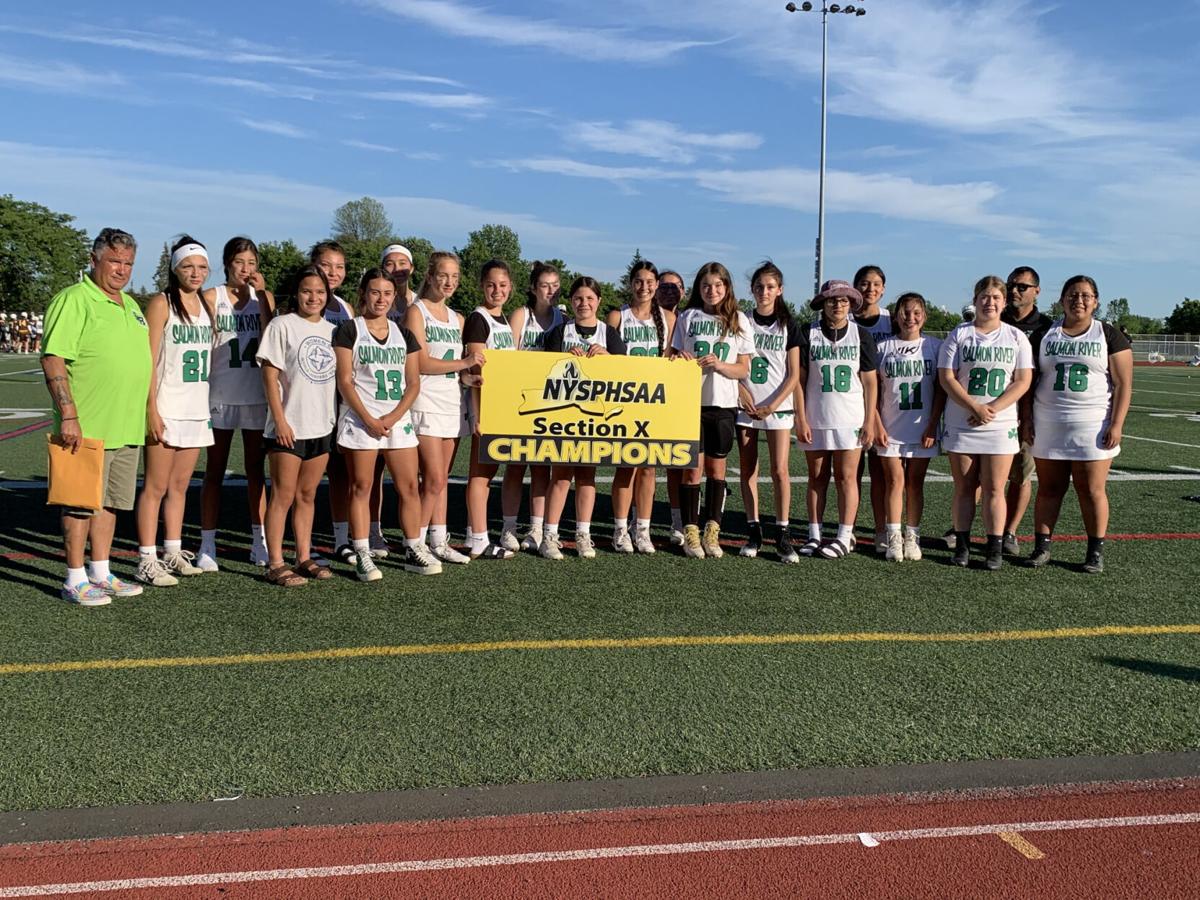 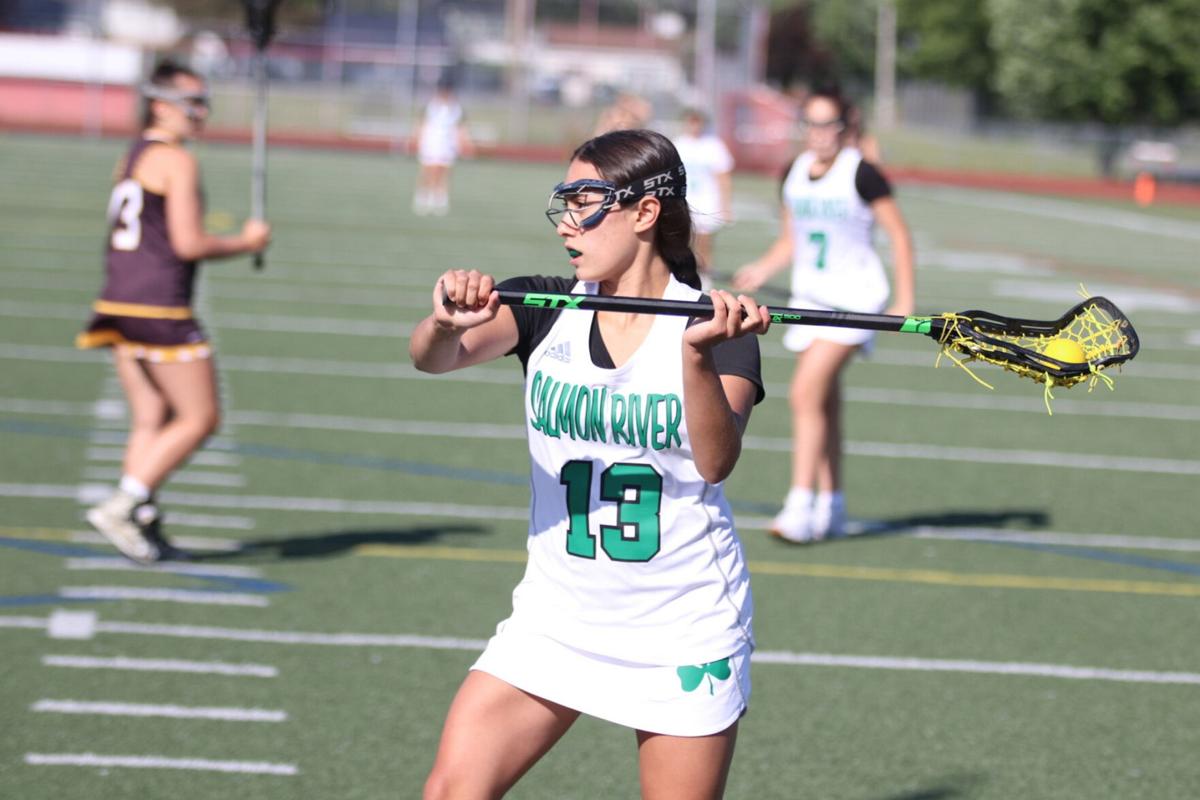 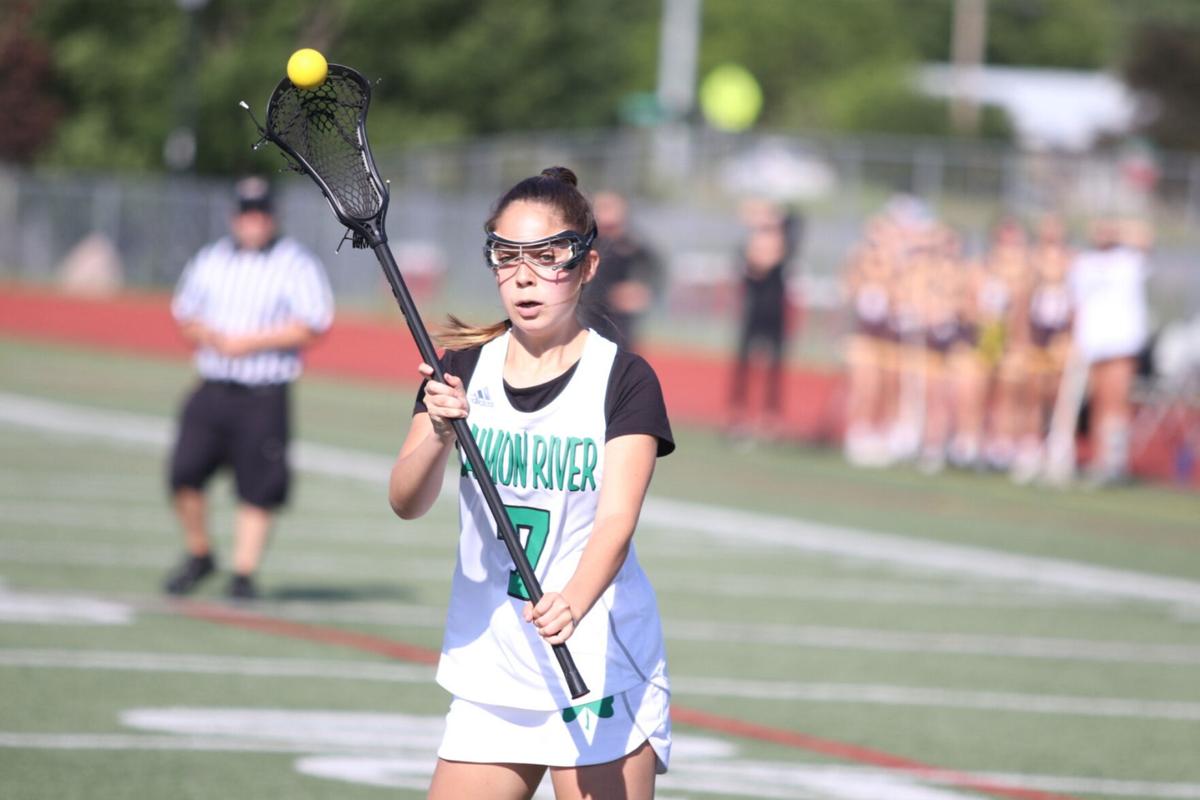 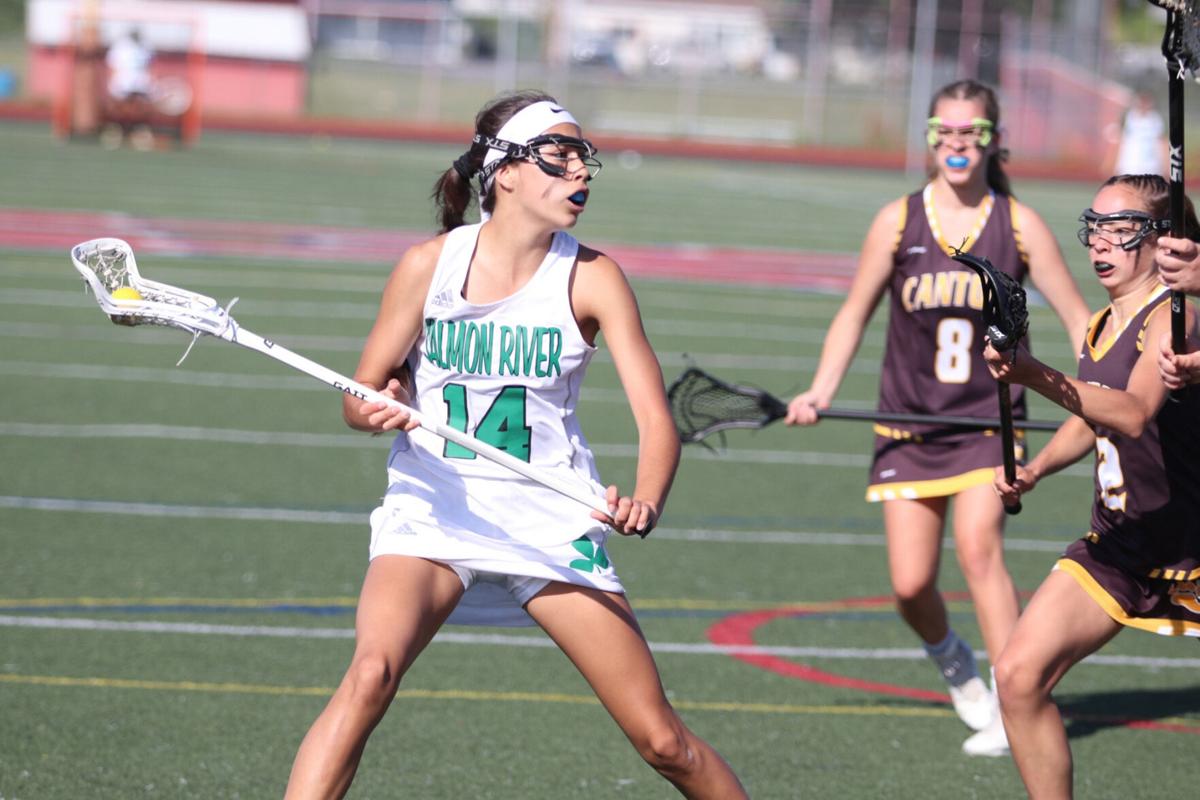 Salmon River midfielder Paisley Cook makes an in-cut between Canton defenders while in possession of the ball. Cook finished with a game-high seven goals and two assists. Evan Wheaton/Malone Telegram

MASSENA — The bus ride from Fort Covington to Massena was a relatively quiet one. One could hear a pin drop. That is, until Salmon River girls lacrosse coach Ron LaFrance addressed his team.

“I said, ‘I don’t care what we have to do. I just want the ball in the net,’” LaFrance said. “The only way to keep them off the board, is to keep getting on the board.”

That’s exactly what the Shamrocks did.

No. 1 Salmon River defeated No. 2 Canton in the Section 10 girls lacrosse championship, 16-5, at Mike Nicholas Field on Thursday.

The Shamrocks (16-0) capped off their undefeated season with a title while dealing with injuries and other issues. Players have filled new roles all over the field, and there have been constant adjustments for Salmon River.

Ariyah, LaFrance’s daughter, is a key component on attack who is currently in a hospital undergoing medical procedures in Burlington, Vt.

“We did this for you,” LaFrance said.

The offense was led by Paisley Cook (seven goals, two assists) and Winter Jock (four goals, three assists). The two combined for six of the Shamrocks’ seven goals to create a 7-4 lead for the Shamrocks at the half.

The two have been playing together since they were young, and have built chemistry that remains profound on the field today.

“We knew we had to come in confident. Us two, we’re always together and we’re there to keep each other up,” Cook said.

Cook scored seconds into the game off the opening draw. Karah White then received a pass from Joryan Adams and tucked in a goal to jump out to a 2-0 lead at the 19:56 mark.

Canton’s Lindsay Fileatrault then cut the deficit in half for the Golden Bears (13-4, 12-3) a little over a minute later with a goal. Once the Shamrocks held a 5-1 cushion, back-to-back goals from Canton kept the Golden Bears within reach.

Cook and Jock righted the ship.

“We just told the girls to keep their heads up and we got through it together,” Cook said.

Jock assisted Cook with a goal to earn her 100th point of the season and put her squad up 6-3.

“It’s really exciting, and I’m really proud of it, but (I’m) more proud of our team and all the hard work they’ve put in,” Jock said. “I probably wouldn’t have gotten this far without them.”

The game featured a key sophomore midfielder matchup between Jock and Canton’s Etta Coburn. Coburn has been an explosive offensive talent for the Golden Bears all season, and was awarded Section 10 girls lacrosse MVP after the game.

Draws, midfield battles, time on attack and defense — Jock and Coburn dueled the whole game. It was a dance between two all-around, premier playmakers.

“Honestly, Etta is a really good player,” Jock said. “It was a matter of trying to figure out the draw, outsmart the other players.”

LaFrance drew up a game plan to contain Coburn. The midfielder always had a shadow, and she was well-defended. Coburn’s production on attack was limited to two goals and one assist.

“We frustrated her all day,” LaFrance said. “She got a couple goals, and that’s expected. But we did what we set out to, and that was to slow her down.”

Haley Stevenson scored two goals for the Golden Bears. Hannah Reed netted Canton’s only goal of the second half at the 9:32 mark.

While both offenses paced well on attack, Salmon River’s defenders were able to break up good looks to help Kimora Swamp at the net.

Kendall Jock and Adams scored a pair of goals apiece for the Shamrocks. On attack, Salmon River pushed the ball and took advantage of its opportunities.

“I told the girls today we needed to play a near perfect game to pull this off, and we did,” LaFrance said. “We held a very high-powered offense to five goals.”

As Salmon River continued to pull away, LaFrance told his team an 8-goal lead was nothing. The defense, however, remained a force for the rest of regulation as the running clock kicked in with three minutes remaining.

“Our defense today was amazing,” LaFrance said. “I give all the credit to Canton (and) their offense. We stalled them and did what we set out to, which was to win the Section 10 crown.”

“One-hundred percent, that game was a turning point for us,” coach Jeffrey Meyers said after the Golden Bears avenged their only NAC loss with a relentless physical 7-5 win over the defending champion Shamrocks in the Section 10 title game at Mike Nicholas Field. “The players changed the way they approached practices and games. They changed their work ethic and they really bought into what we were coaching.”

“This is a great group of kids. They’ve been great to work with right from the start,” added Meyers, who closed out his first season at Canton. “I’m loving it right now. I wouldn’t have wanted anything else from my first year.”

In Thursday night’s win over Salmon River (12-3), the Golden Bears trailed 3-1 midway through the second quarter after Ryan Oakes, Jr. connected for the first of his two goals. Canton (14-2) closed out the first half with goals by Mike Schwartfigure and Colin Taylor to go into halftime knotted at 3-3 then took control with a late scoring burst in the third quarter where the shutout the Shamrocks 3-0 to go into the fourth leading 6-4.

Kahentaienni Thompson ended a Salmon River scoring drought that spanned nearly 22 minutes when he struck for his second of the game with 8:32 remaining in regulation but Nolan Bombard restored the three-goal lead four minutes later before Stone Chubb closed out the scoring with 16 seconds remaining.

“Give Canton credit. They came ready to play tonight,” Shamrocks’ coach Jim Barnes said. “We had our opportunities but didn’t capitalize. We made mental mistakes and we started taking penalties in the second half.”

After trading failed possessions through the first seven minutes, Canton broke through for the opening goal when Aiden Hoose, a Colton-Pierrepont senior, converted for a power play goal off an assist from junior Daniel Mahoney with 4:43 left in the first quarter. Chubb tied the game less than a minute later with an unassisted strike and Thompson gave the Shamrocks their first lead with 38 seconds left from Oakes.

Having tied the game with two straight goals to end the second quarter, the Golden Bears continued their turnaround late in the third where they produced three more goals over a two-minute stretch. Bombard sparked the decisive run when he scored from Mahoney with 2:35 left.

Mahoney then converted on a pass from Hoose with 1:11 left before Hoose, who finished with two goals and three assists, pushed the lead to 6-3 with 35 seconds left from Bessette.