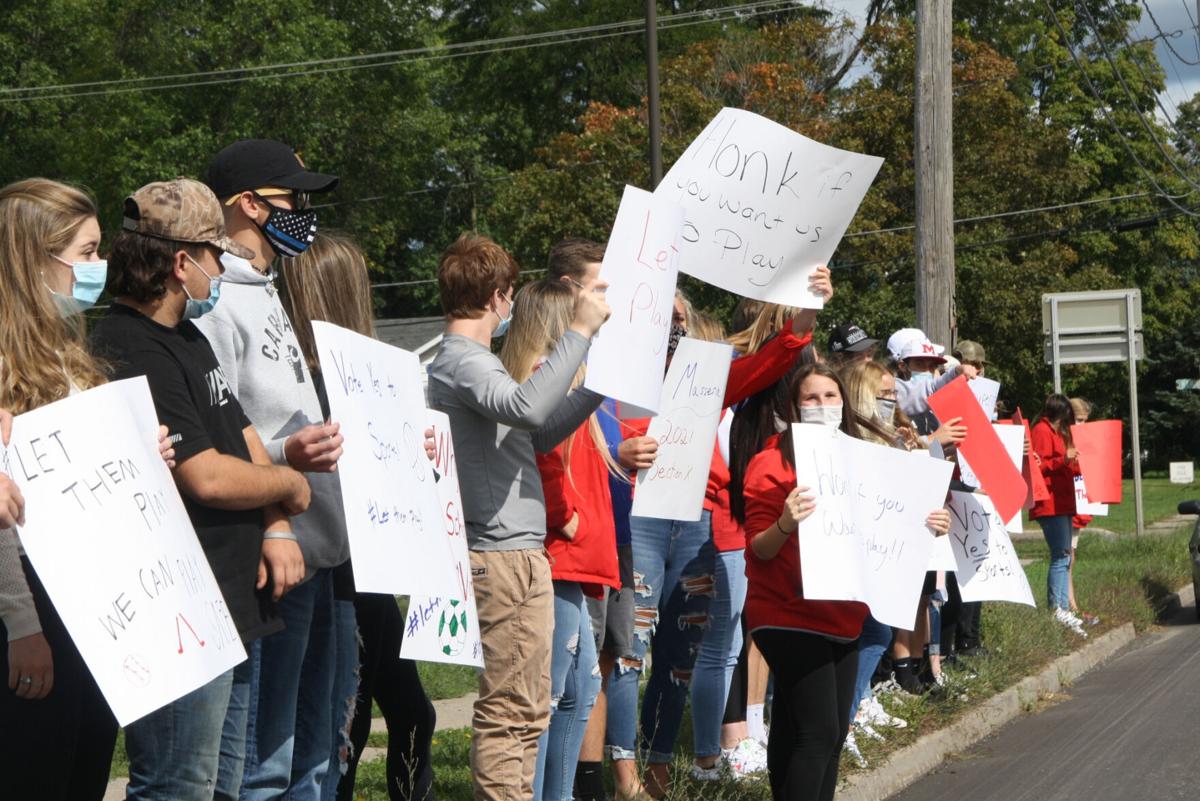 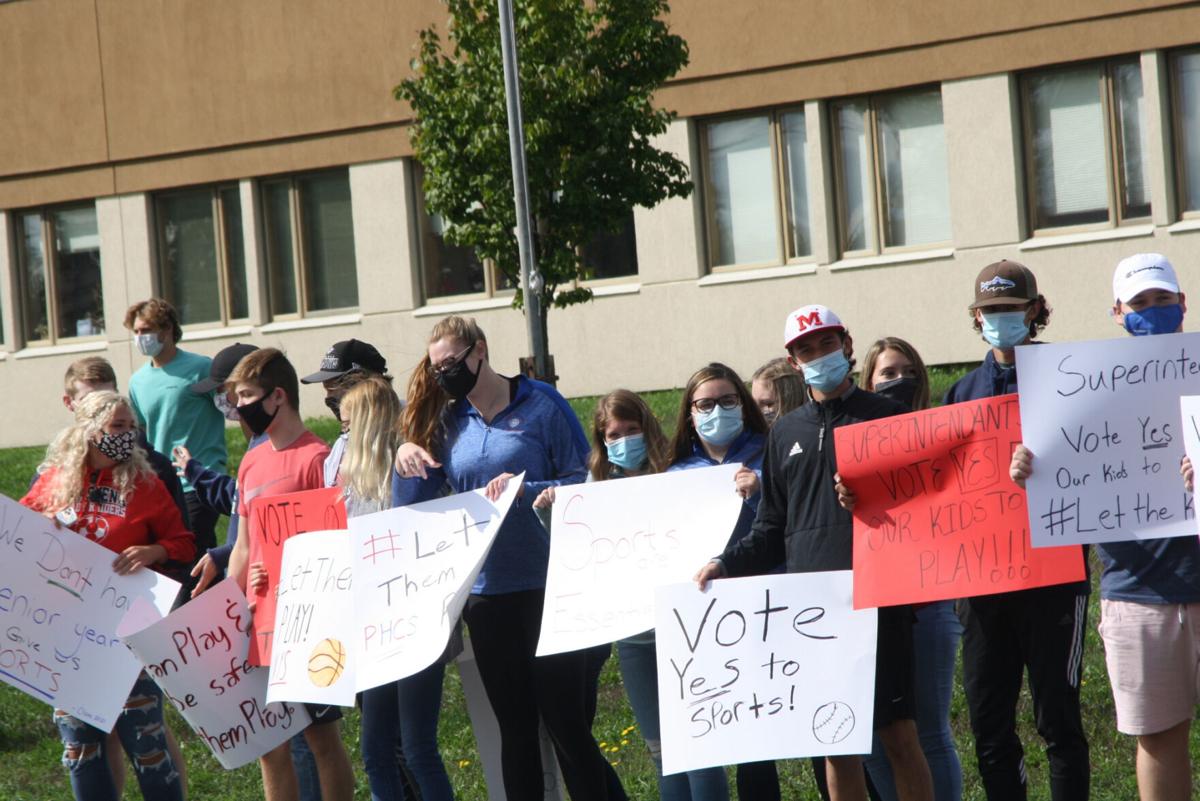 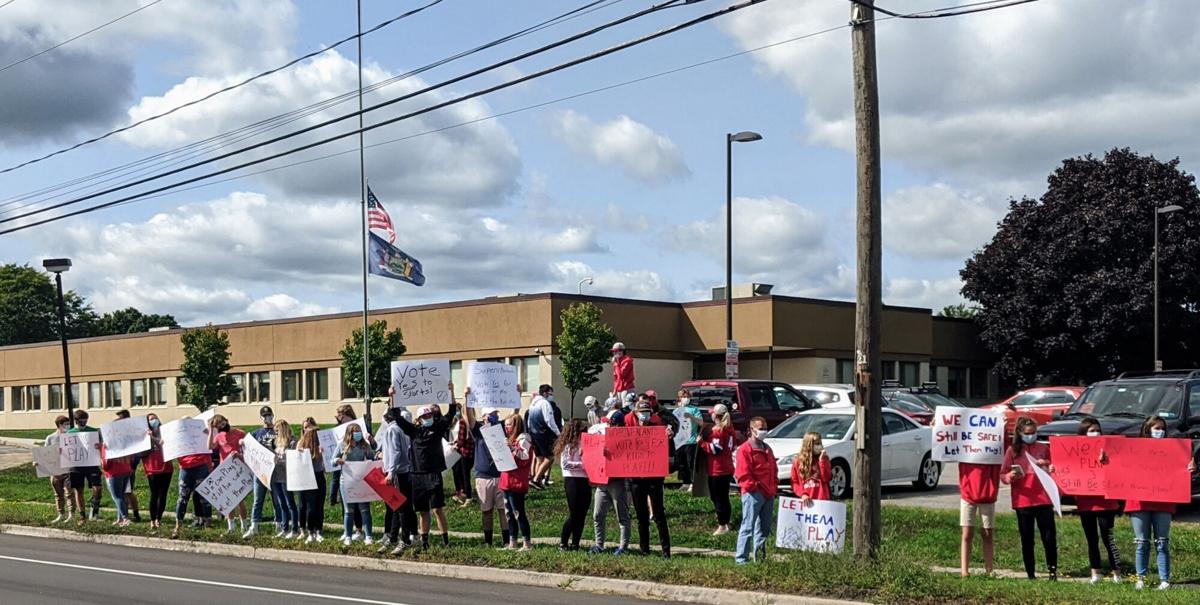 CANTON — Student athletes from around St. Lawrence County gathered in front of the St. Lawrence-Lewis BOCES building on West Main Street on Monday afternoon to press school superintendents to start up the fall sports season.

The students said they’re unsure of the process being used to determine whether sports would go forward, and they’re concerned they’d be left out of the discussions.

“The main concern is that Section 10 is going to be one of the only sections around here left out due to budgetary concerns rather than health and safety,” said Reilly B. Donahue, a senior lacrosse player from Massena. “It is really hard to get an official statement from anybody.”

After the spring athletic season was lost to the ongoing coronavirus pandemic, students want the decision makers to know they want to play.

“I saw what happened last year to our seniors,” said Christopher C. Kucipak, a junior football and baseball player from Massena. “I would feel terrible to see that happen to my senior friends this year — to see that happen again — and for me to lose another season.”

Kevin J. Hayes, a parent and former baseball coach for the Parishville-Hopkinton School District, was on the sidewalk outside of the BOCES with his two children, a junior and a seventh-grader.

“These kids need an outlet, they need sports,” Mr. Hayes said. “They have been out of school since March. Now they are half in and half out of school. For their mental health, the kids need it.”

Superintendents met on Friday to talk through where school districts stand on the topic of sports, Mr. Burns said.

“Do they think they could pull off sports both from a health and safety standpoint, but also from logistics,” Mr. Burns said. “One thing that is huge in all this is transportation. Just to get kids to school was like climbing Mt. Everest.”

Superintendents and school boards have a lot to consider, Mr. Burns said, and their decision making process was delayed while waiting for guidelines from the state.

Any sports played this fall, which will likely be soccer and cross country, will have abbreviated seasons, but what to do with other sports has to be part of the equation, he said.

“It’s complicated,” Mr. Burns said about the Friday meeting of superintendents. “There was a lot they had to sort through and it was clear to me on Friday that we did not have a complete consensus.”

Mr. Burns said he thought about two-thirds of the districts were ready to make a decision and the other third were close.

For the kids on West Main Street on Monday afternoon, the decision could not come soon enough. They chanted, “let us play, let us play,” while waving signs that said, “vote yes for sports,” and “we can still be safe,” while passersby honked their horns in support.