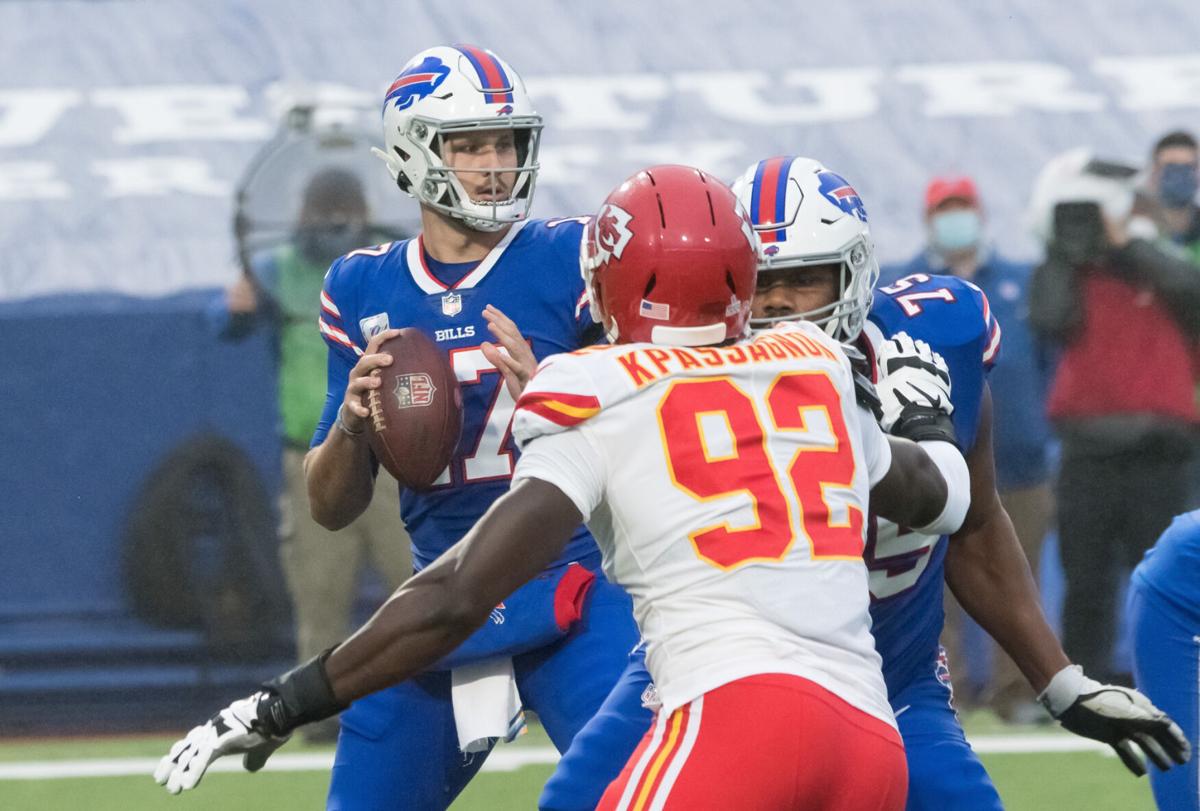 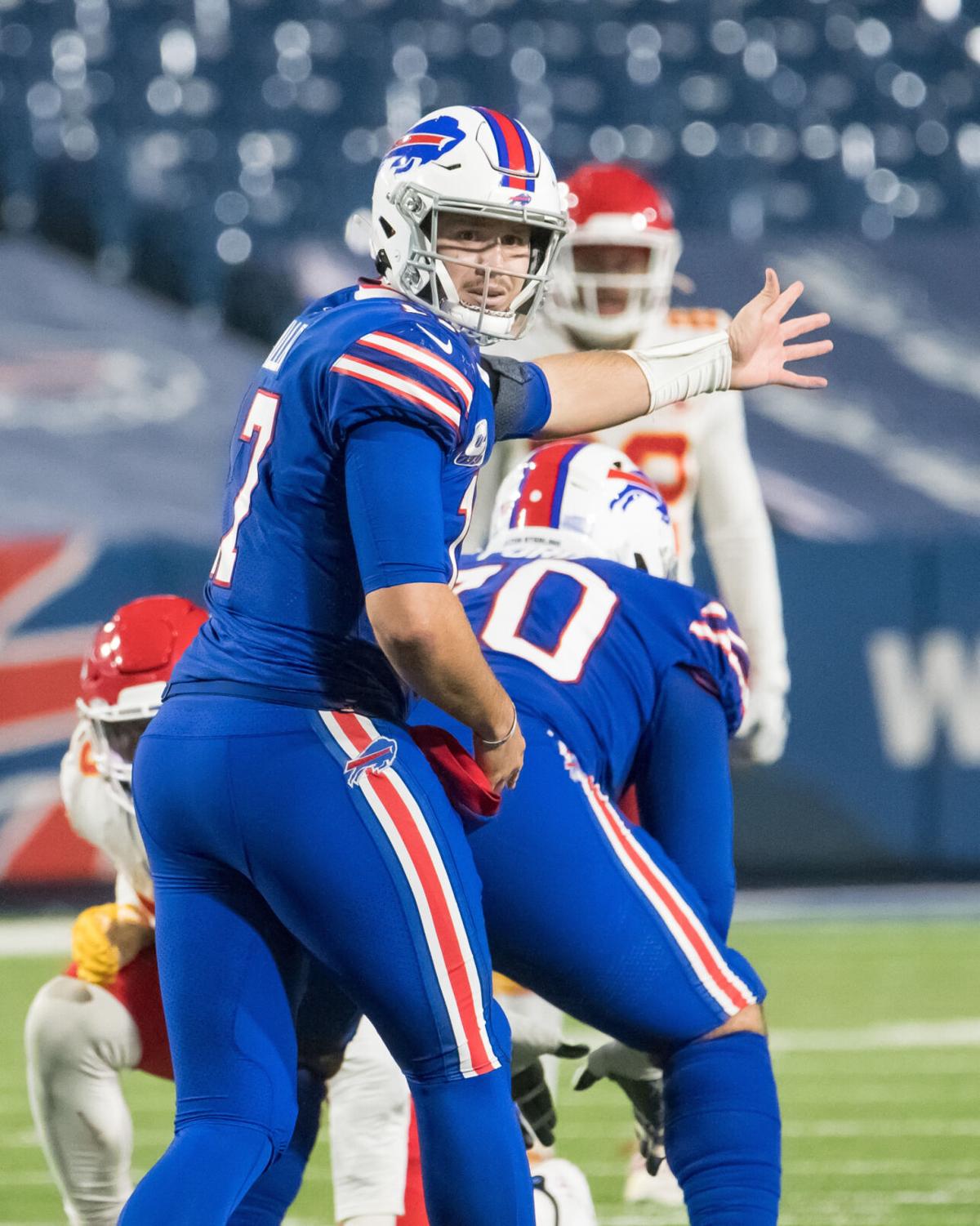 Buffalo quarterback Josh Allen looks back to the referee in the third quarter against Kansas City on Oct. 19 at Bills Stadium. Mark Konezny/USA TODAY Sports

Buffalo quarterback Josh Allen looks back to the referee in the third quarter against Kansas City on Oct. 19 at Bills Stadium. Mark Konezny/USA TODAY Sports

As the Bills get set to take on the defending Super Bowl champion Kansas City Chiefs in this year’s AFC Championship game, Buffalo quarterback Josh Allen seeks revenge against a defense that limited him to his worst performance of the year.

Previously against Kansas City in Week 6, Allen finished with his lowest yardage output of the season (122 passing yards) while also recording his worst completion percentage to date (51.85%) during a 26-17 loss. Coming off of two solid postseason efforts, Allen is in a prime position to rewrite the narrative between him and KC this season and help the Bills earn their first Super Bowl berth since the mid-1990s.

The first time around, Allen says the Chiefs surprised him and the Bills with a few things that they threw at them defensively. But since then, the Bills QB says he and those around him are night and day in terms of their preparation and the progression they’ve seen over the past 12 games.

“I think we’ve gotten a lot better since that game. You know, they can say the same thing, and it’s just two good teams that are going to go on out there and compete,” said Allen on Wednesday. “It’s going to be a four-quarter dogfight. We know that we understand that and we got to do everything in our power to put our best foot forward and not make dumb mistakes and put the ball where it needs to be.”

Putting the ball where it needs to be will be critical for Allen this week as, through inclement weather at Bills Stadium in mid-October, Allen struggled with accuracy against the Chiefs and completed just 14 of his 27 pass attempts. If the Bills hope to find a better result, Allen must be more accurate against KC on Sunday, particularly under pressure where he didn’t fare well in Week 6.

According to Pro Football Focus, earlier this season, when the Chiefs pressured Allen, he went 4-of-13 for 44 yards, a touchdown and an interception. When he wasn’t pressured, Allen went 10-of-14 for 78 yards and a score. Last week, against the Baltimore Ravens, Allen had a nice performance when under pressure, completing 6-of-9 passes for 69 yards, and he must do the same this week.

Despite his past performance against the Chiefs, Allen says he and the Bills’ offense shouldn’t feel the need to make any significant changes this week.

“We don’t need to reinvent anything on our offense,” said Allen. “We just need to go out and try to execute a gameplan.”

The Bills will be looking to deploy their gameplan against a Chiefs’ defense that hasn’t allowed a 300-yard passer since Tampa Bay Buccaneers QB Tom Brady eclipsed that mark Week 12. Since that game, KC has held opposing passers to under 250 yards on three separate occasions, including last week when Cleveland Browns QB Baker Mayfield threw for just 204.

Another thing to watch out for is Kansas City’s ability to create turnovers, which they’ve done in all but two of their games this season. Allen has thrown just three interceptions since Week 12, but the fumbling issues he struggled with near the beginning of the season have reoccurred in recent weeks. He’s fumbled the ball in both of the Bills’ playoff wins, but Buffalo was fortunate enough to fall on both loose balls. This week, going up against one of the most opportunistic defenses in the NFL, Allen can’t afford to let the ball go.

Another challenge for Allen will be playing in front of what is expected to be 17,000 screaming fans at Arrowhead Stadium. For the past two weeks, he has played in front of ‘Bills Mafia’ inside the friendly confines at Bills Stadium. This week, Allen will be looking for his first career road playoff win.

“We’re preparing for it. But until you’re in that moment, you’re not really sure what to expect. I’ve never played in Arrowhead, but everybody tells me the fans are right on top of you,” said Allen. “It’s going to get extremely loud with 17,000 people. They’re an extremely energetic fan base, and when they get things rolling, it gets super loud in there.”

There are plenty of challenges in front of Allen and the Bills this weekend, as they now sit just one win away from the Super Bowl. What many consider the best team in the NFL stands in its way, as Buffalo and its quarterback must be at their best this weekend if they hope to survive and advance.