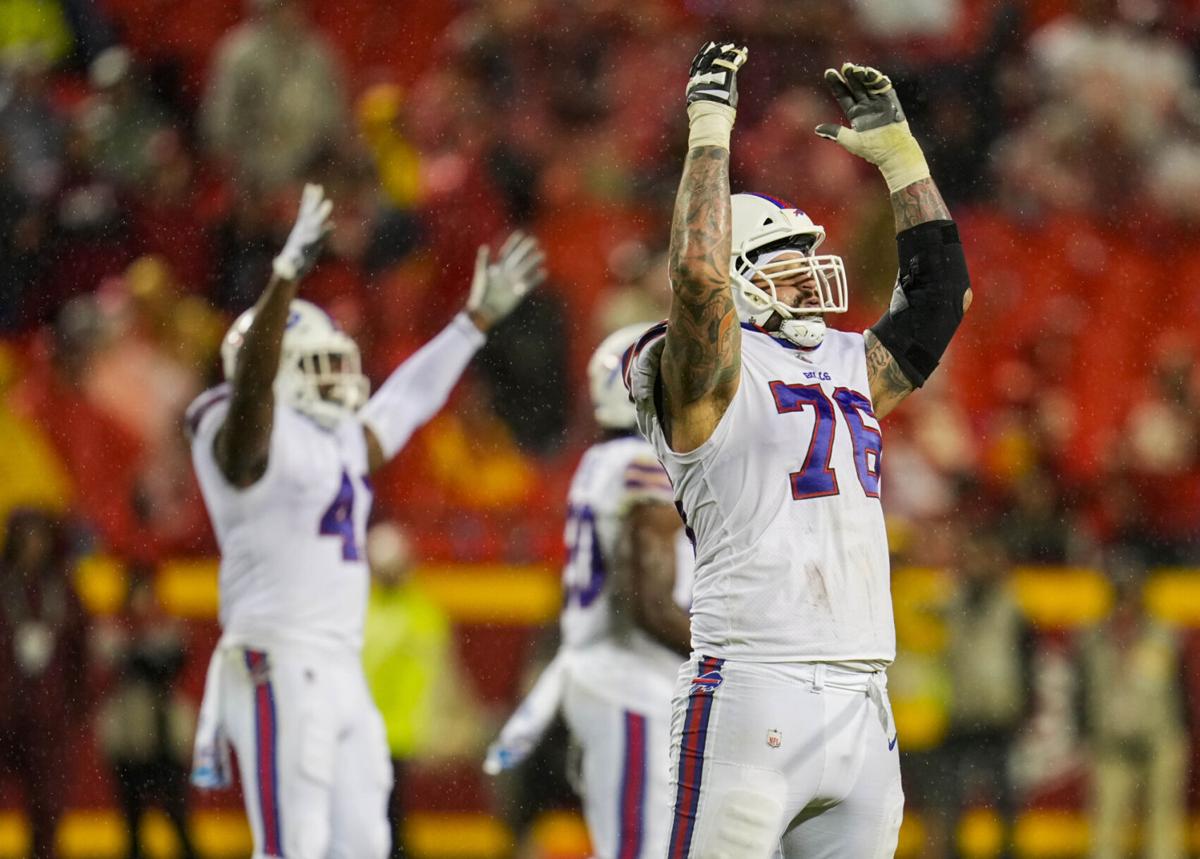 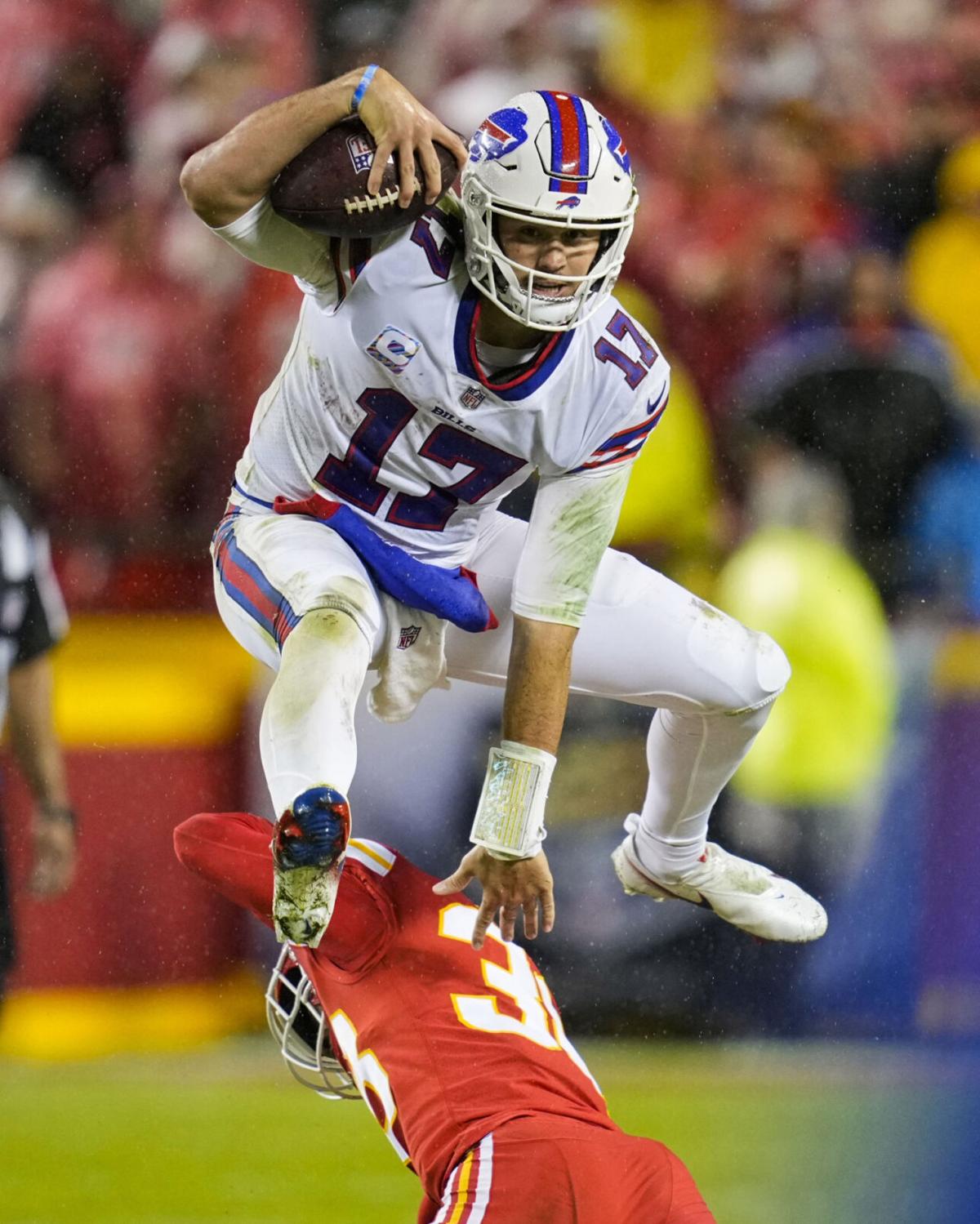 If you were looking for confirmation that the Bills are a Super Bowl contender — scratch that, favorite — look no further than Sunday night’s win over the defending AFC Champion Kansas City Chiefs.

Buffalo took it to the Chiefs on their home field, withstanding an extended halftime caused by a lengthy weather delay to dispatch former MVP quarterback Patrick Mahomes and the vaunted KC offense, 38-20, behind a solid night from quarterback Josh Allen and the Bills’ offense to go with another stellar effort from the defense.

While limiting KC to 20 points, its lowest scoring output of the season, Buffalo forced four Chiefs’ turnovers and sacked Mahomes twice, making the former MVP look ordinary. On the other side of the coin, Allen and the Bills’ offense flourished, recording 436 total yards, while Allen threw for three touchdowns and went over 300 yards passing as Buffalo’s put forth its fourth straight 35-plus point performance.

Sunday was the Bills’ finest hour as they improved to 4-1 while proving themselves worthy of Super Bowl discussion.

Buffalo came away with two interceptions and recovered two fumbles against the Chiefs to extend their league-leading takeaway total to 15.

Highlighting the stingy effort from the Bills’ defense was safety Micah Hyde, who recorded an interception for his third-straight game and returned it 26 yards for a touchdown. Hyde, whose production often goes unnoticed, is having an All-Pro level season for the Bills.

Reserve defensive back Siran Neal, who was tasked with following Chiefs All-Pro tight end Travis Kelce for a good portion of the game, also created a turnover, forcing a fumble following the Bills’ touchdown on their opening drive. On the ensuing kickoff following the Bills’ TD, Neal delivered a big blow to Chiefs kick returner Byron Pringle, who put the ball on the ground where linebacker Andre Smith recovered it. Despite a couple of holding penalties, Neal had a solid night against the Chiefs, continuing his mastery on special teams while also making Kelce uncomfortable throughout the night.

Kelce hauled in six receptions in a losing effort but finished with just 57 receiving yards. He also added a receiving touchdown. The Buffalo defense also did an admirable job slowing Chiefs All-Pro WR Tyreek Hill, who was coming off a monster effort in Week 4. Buffalo held Hill to seven catches for just 63 receiving yards and one run for 15 yards.

The Bills took the ball away and limited the Chiefs’ star players to reasonable production — a recipe for success when facing a team of KC’s caliber.

Bills rookie defensive end Greg Rousseau put forth an outstanding effort against the Chiefs, impacting the run game and pass rush, finishing with a sack while also coming away with a game-changing interception late in the third quarter. On the interception, Rousseau tipped a pass from Mahomes into the air and tracked it down before falling to the ground with the pick secured.

Since being drafted in the first round, Rousseau has forced his way to the top of the Bills’ pass rush rotation while placing himself in a position to become a pro-bowler in his first professional season. The rookie has started all five games for Buffalo this season, recording 18 tackles, four of which have come for a loss, three sacks and the interception.

Throughout the offseason, Buffalo was on a mission to improve its pass rush. Through five games, Rousseau’s performance alone has been enough to say that mission was a success. The rookie has been fantastic for the Bills in the early going.

Along with Rousseau, the Bills’ rush as a whole proved impactful on Sunday night against Mahomes and the KC new-look offensive line. Although Buffalo sacked Mahomes just twice, the Bills recorded eight QB hits, per ESPN, and consistently moved the former MVP off his spot and forced him into uncomfortable situations. And they did it all without blitzing a single time.

If the two teams are to meet again this postseason, the Bills proved on Sunday night that they could make things difficult on the Chiefs quarterback and the KC offense as a whole.

The rapid ascent of Bills’ tight end Dawson Knox has been something to behold.

After struggling with dropped passes early in his career, which resulted in steep criticism, Knox went to work and has transformed himself into one of the league’s top options at the position.

Don’t believe me? Well, the stats bear it out.

Knox is currently fifth in the NFL in receiving yards by a tight end and has scored the most touchdowns of any TE this season (5). In fact, Knox has the second-most receiving scores in the NFL, one behind league-leader Mike Williams of the Los Angeles Chargers (6). The Bills TE has scored in four straight games and is coming off a career-high 117 receiving yards on three receptions against the Chiefs.

Knox has been a reliable target for Allen this season which has helped the Bills quarterback work through some early struggles to regain his form from a season ago.

A capable tight end is a valuable asset for any NFL offense, as is proving to be the case with Knox in Buffalo. Although many believed the Bills would employ four and five-wide receiver sets with regularity this season, it’s no secret the Buffalo offense has been at its best with Knox on the field.

Cole Beasley was a non-factor during the Bills win over KC. According to Jay Skurski of The Buffalo News, the veteran wide receiver played just 22 snaps on Sunday night, his second-lowest single-game total in his three seasons in Buffalo.

Following the Bills blowout victory over the Houston Texans in Week 4, during which he recorded just two catches for 16 yards, Beasley took to Twitter to comment on what he perceived as poor treatment from Bills’ fans.

“Only place I get boo’d is at our home stadium,” tweeted Beasley. “Then some of the same people want me to take pictures and sign autographs. I thought bills fans were the best in the world? Where’d they go?”

Perhaps Beasley’s reduction in playing time resulted from his comments, and maybe it didn’t. But either way, his elimination from Buffalo’s gameplan against KC was curious. After recording 23 catches for 194 yards during the Bills’ first three games, Beasley has caught just three passes for 21 yards in Buffalo’s past two matchups.

All that said, Beasley’s lesser involvement may have been matchup-based, as Knox recorded his highest snap count of the season (96%), and WR Jake Kumerow was also involved in the running game.

Following the statement win over the Chiefs, Buffalo now moves forward into Week 6, as they await a matchup with the Tennesee Titans (3-2), a team that embarrassed the Bills a season ago.

Tennessee started the ‘21 campaign slowly with a blowout loss at the hands of the Arizona Cardinals, 38-13. Following the Week 1 defeat, the Titans won two straight before crashing back to earth with a disappointing, 27-24 overtime loss to the hapless New York Jets. Tennessee rebounded from the embarrassing defeat with a blowout win over the putrid Jacksonville Jaguars this week.

Now riding a four-game winning streak and approaching the meat of their regular season schedule, the Bills are in prime position to put some distance between themselves and those behind them in the race for the top seed in the AFC. Following their matchup with Tennessee, Buffalo has a bye in Week 7, then will take on the Miami Dolphins, the Jaguars, the Jets and the Indianapolis Colts — teams with a combined record of 3-16. The Bills very well could be 9-1 after 11 weeks.

This team is playing perhaps the best football we’ve seen in franchise history and is well on its way toward making the Super Bowl run that everyone expected.