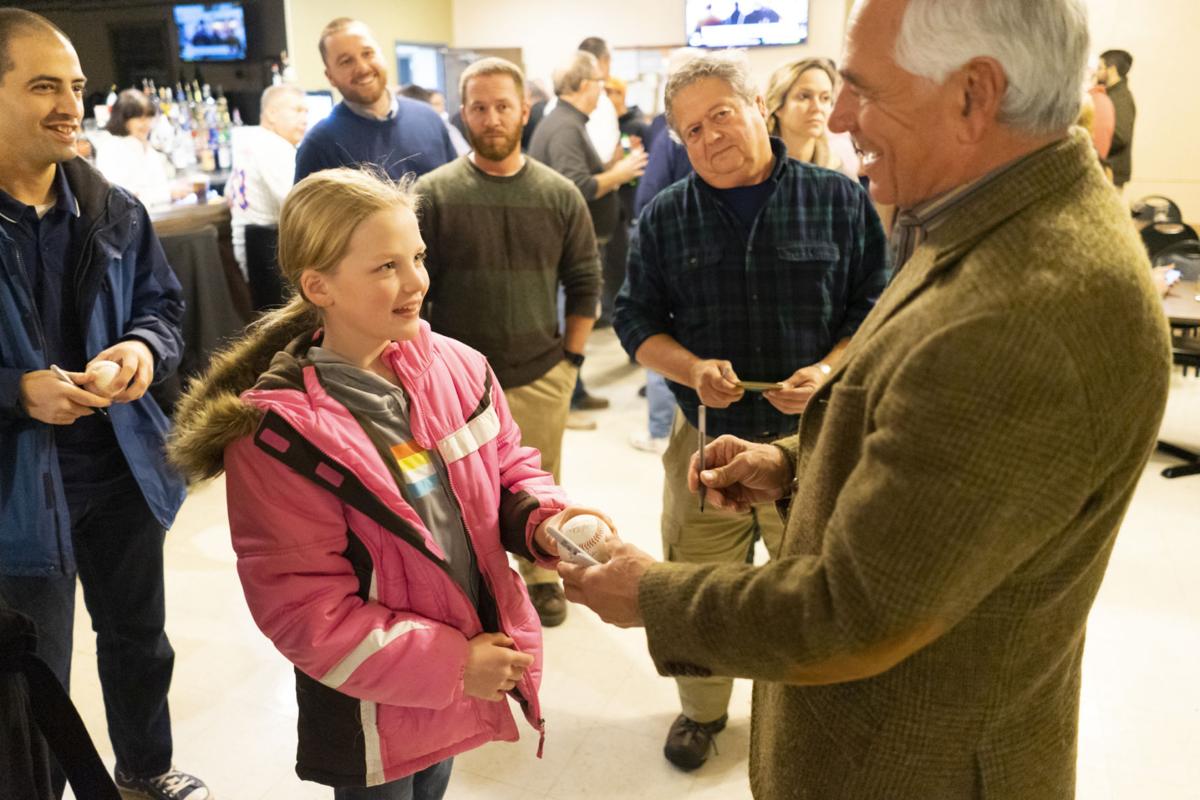 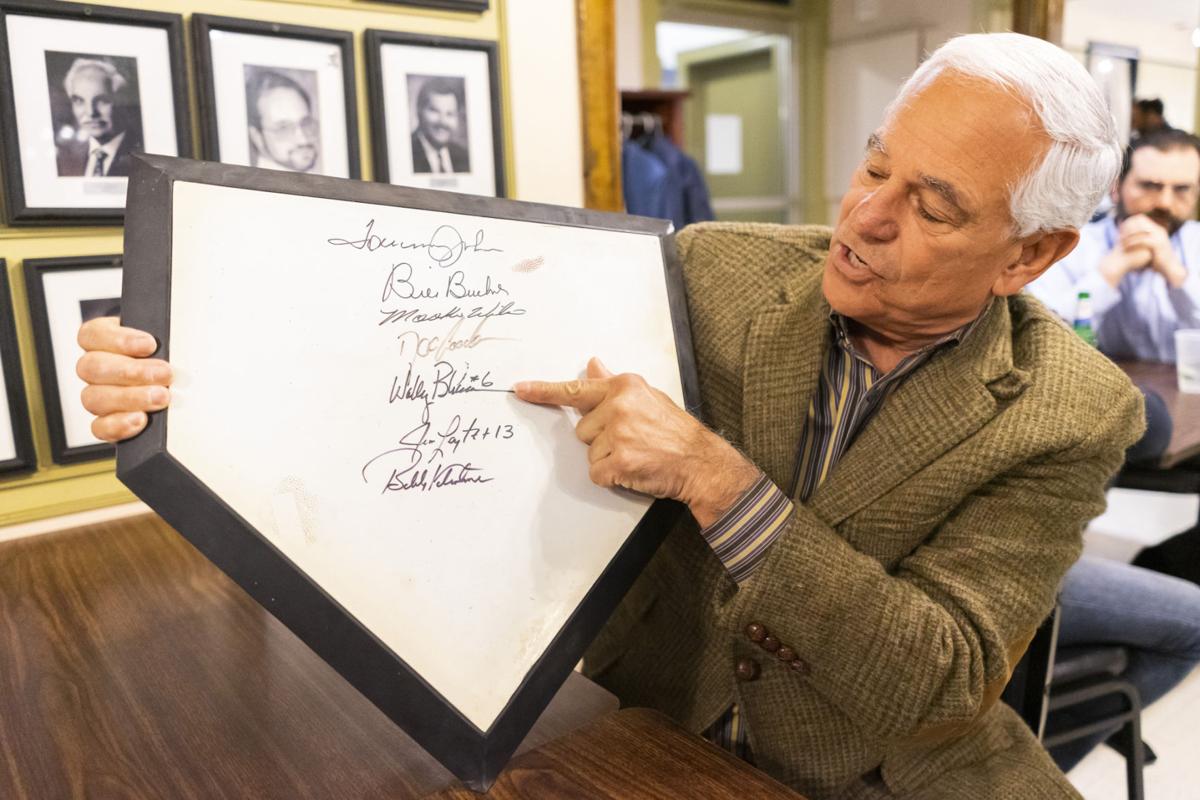 Former major league player and manager Bobby Valentine points out the signatures of players he has known that have visited the Italian-American Civic Center on Wednesday evening in Watertown. Julia Hopkins/Watertown Daily Times 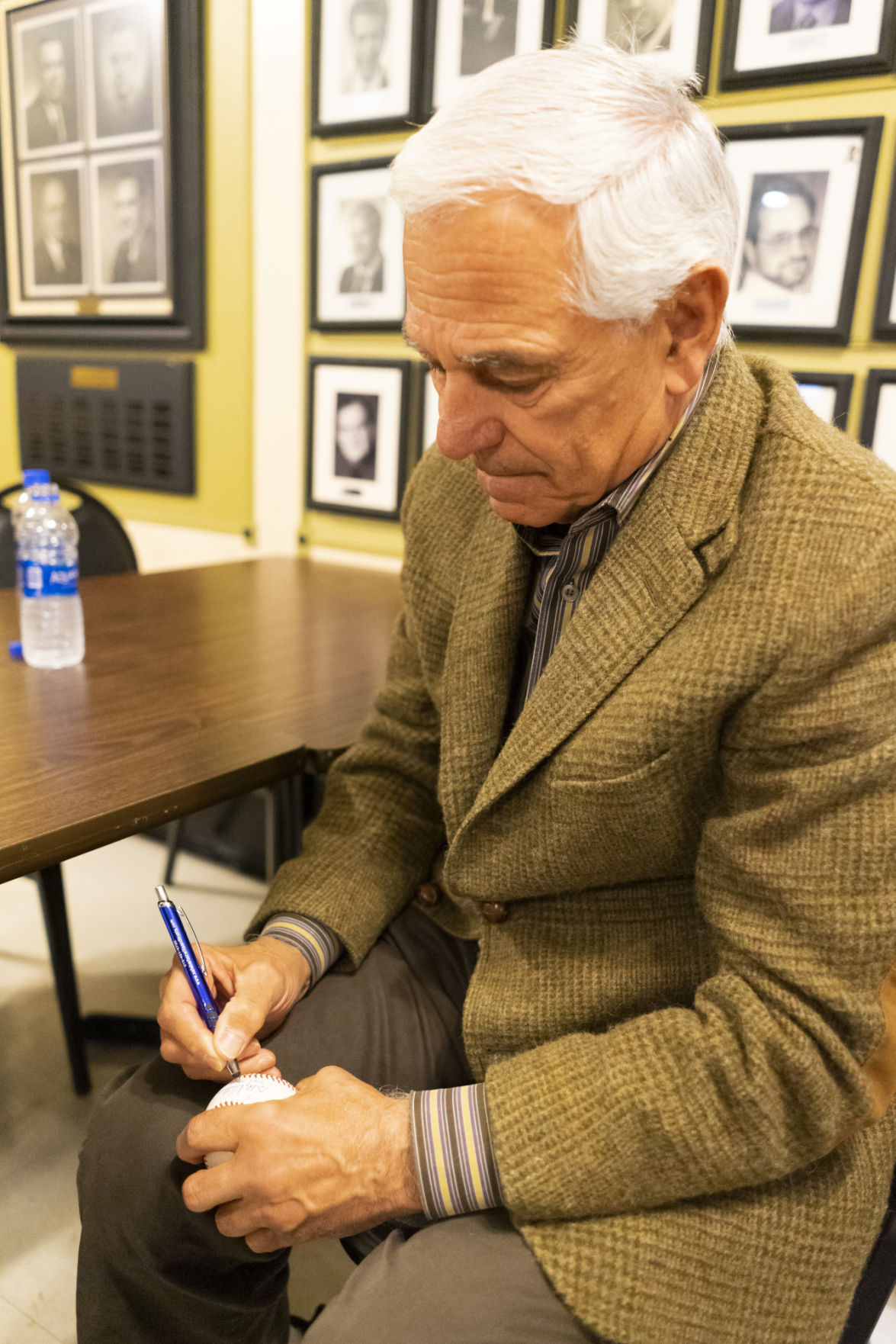 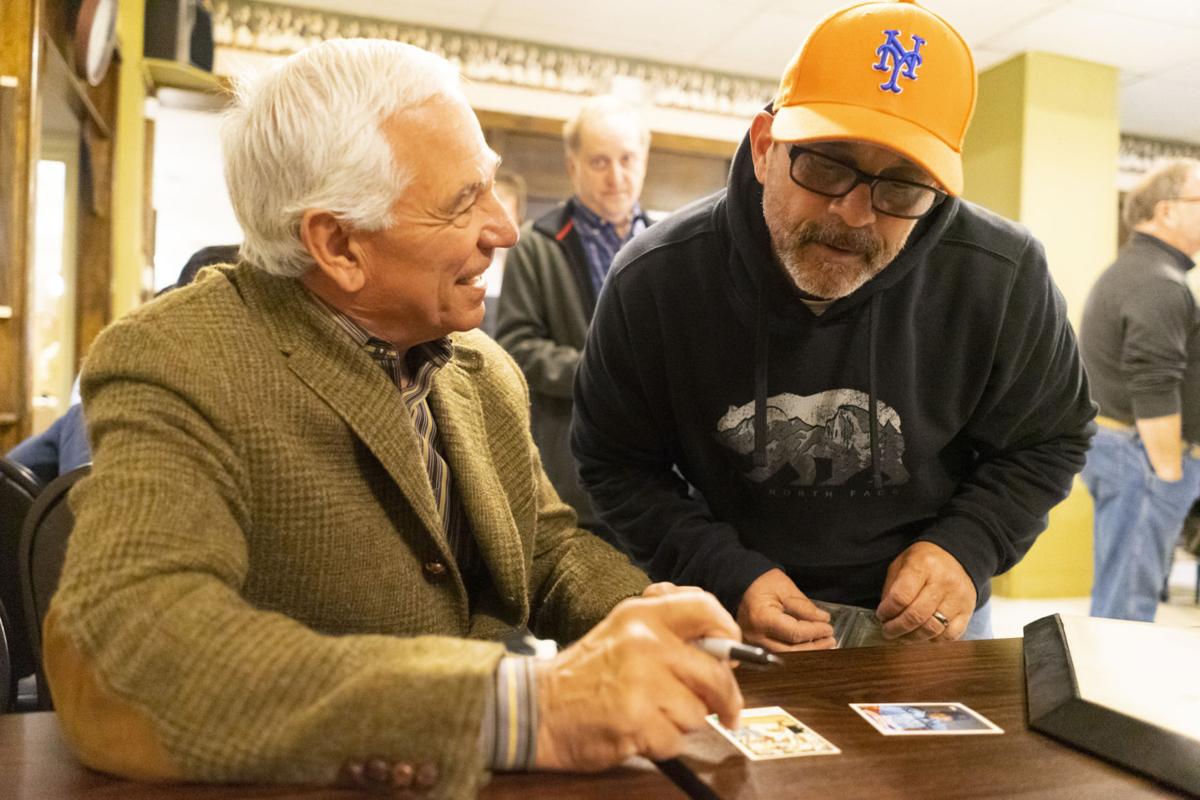 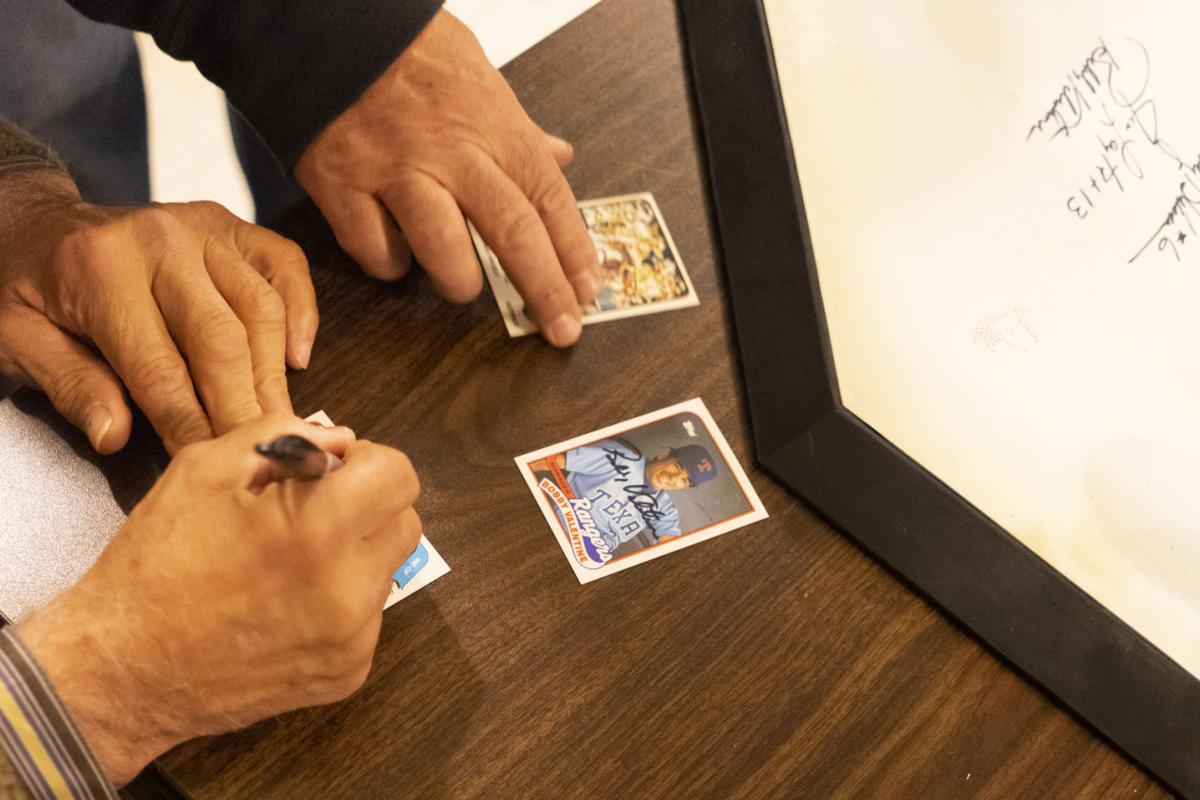 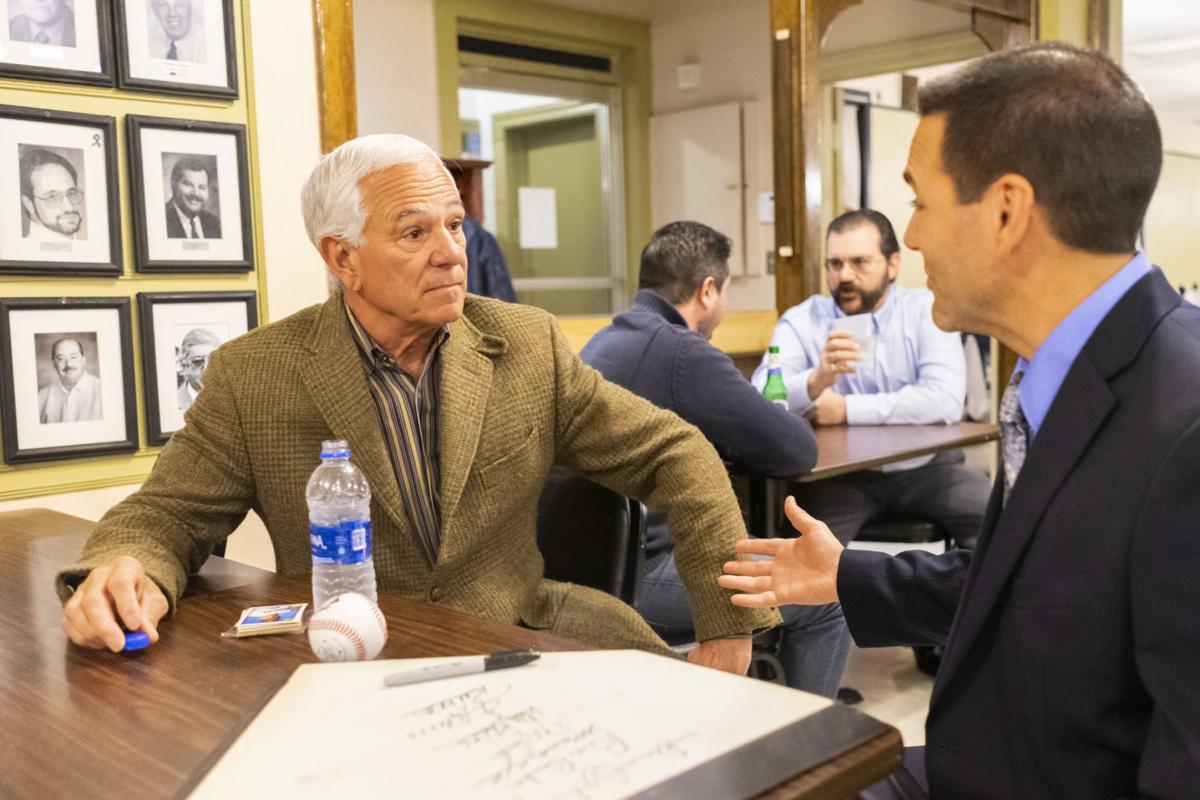 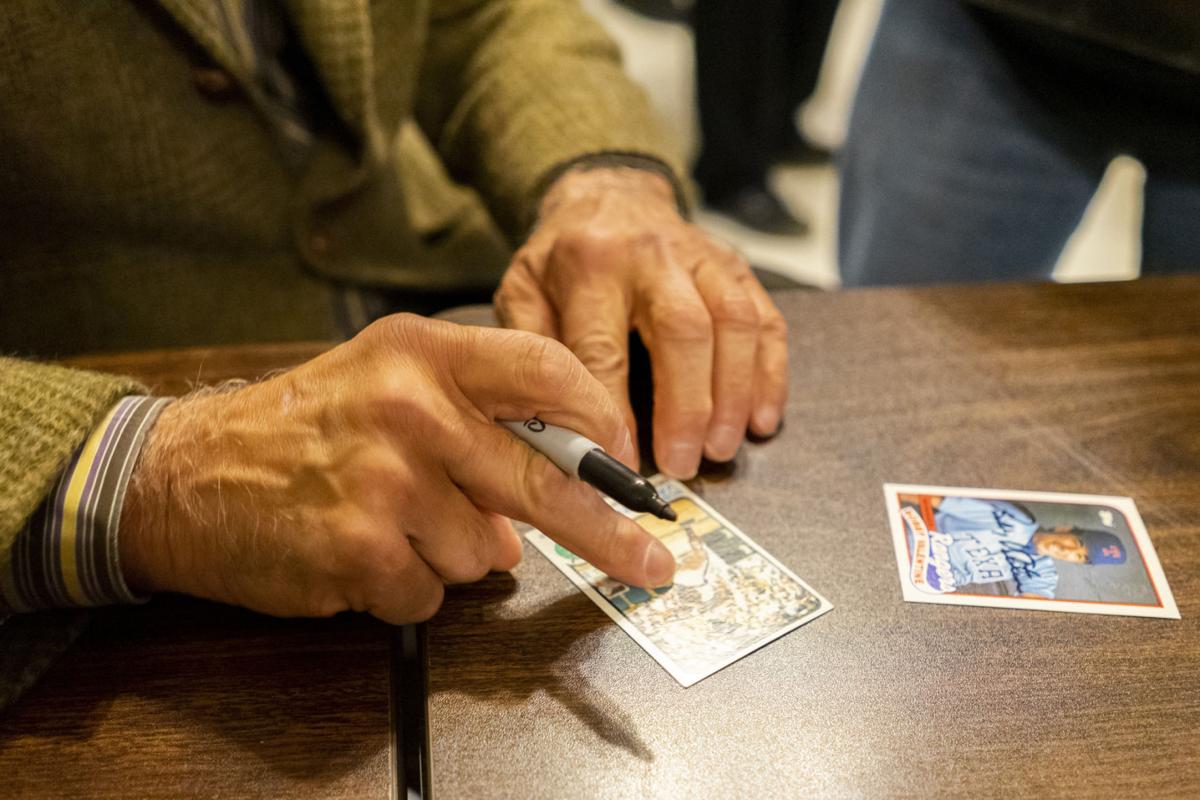 Former major league player and manager Bobby Valentine points out the signatures of players he has known that have visited the Italian-American Civic Center on Wednesday evening in Watertown. Julia Hopkins/Watertown Daily Times

WATERTOWN — Bobby Valentine works in the college game these days as the athletic director for Sacred Heart University in Fairfield, Conn., but he’s never far from the major league baseball scene where he played and managed for seven different teams over 26 years.

“I think what it is, is a threat to try to get these (minor league) operations to share more of the costs,” Valentine said of MLB’s possible realigning of leagues that could leave fans hundreds of miles away from a pro baseball team. “When you’re paying nothing for your product and you get to sell it, you have a pretty good business. Now the people who are paying for the product say, “We want a little more’ ... I get that. But I hope that’s all it is, is a threat. Because if (contraction) ever comes to fruition, (the fans aren’t) coming back.”

Alteri arranged Valentine’s arrival Wednesday through Megale, a good friend of Valentine’s. Megale hit .387 with 13 home runs for the now-defunct Wizards in 2003 when Alteri coached the team.

“He asked if maybe Bobby could come speak, (and asked) ‘what does he need?’” said Megale, a Stamford, Conn., native like Valentine. “I said he doesn’t need anything, just let me ask him. It was just a simple phone call ... (Valentine) said, ‘If you want me to do it, it’s done.’”

Valentine began his pro baseball career as the No. 1 draft pick of the Los Angeles Dodgers in 1968, beginning lifelong relationships with players like the late Bill Buckner, as well as Hall of Fame manager Tommy Lasorda, who scouted Valentine before managing him in the minor leagues.

Valentine played for the Dodgers, Angels, Padres, Mets and Mariners between 1969-80, his career hampered by a major leg injury while playing with the Angels in 1973. He managed the Texas Rangers in 1985 at age 35 and was the franchise’s winningest manager with 581 total victories before Ron Washington broke the mark in 2013.

Valentine then managed the Mets for seven seasons, culminating in the team’s appearance in the World Series in 2000 where they lost to the Yankees. He finished his MLB managing career with one forgettable season with the Red Sox in 2012 in which the team went 69-93.

Valentine put together two different stints as manager in Japan, becoming the only person to manage in the World Series and the Japan Series.

After the Red Sox let him go, Valentine was hired at Sacred Heart for the AD job in 2013, his first collegiate administrative position.

I couldn’t spell AD at the time,” he said. “I knew nothing about it, and I said, ‘Why not?’ I asked the guy, ‘How long you need me?’ and he said, ‘As long as you want.’ I thought it would be six or seven weeks, and it’s been six or seven years.”

At Sacred Heart, Ogdensburg native and one of the greatest women’s athletes from the north country, Elizabeth “Bippy” Luckie, works for Valentine as an administrator after retiring as the Pioneers’ all-time record-holder in softball coaching victories in 2018.

The sociable Valentine continues to appear on television time-to-time to discuss baseball and supported the Mets’ new manager, Carlos Beltran.

“I’ve only been to dinner with Carlos a couple of times. He’s easy to like. He’s a gentleman. He exudes class. That team is so good, if they stay healthy there’s no reason he shouldn’t be the right man at the right time,” Valentine said, predicting a wire-to-wire finish for the Mets in 2020.

Valentine stressed that the commotion over the Astros’ alleged sign stealing is nothing new, but simply a case of using updated technology.

He pointed out the New York Giants’ sign-stealing operation during the 1951 season that peaked with Bobby Thomson hitting a game-winning home run off of Brooklyn Dodgers’ pitcher Ralph Branca, who would wind up Valentine’s father-in-law, in a one-game playoff to reach the World Series.

The Giants, it was reported in 2001, used a telescope and electrical buzzers to signal to the team’s hitters from the bullpen.

“That was 1951, this is 2019!,” said Valentine, who said the onus is on teams to prevent their signs from being stolen. “Since then, everyone has been trying to improve on the telescope. So when (the commissioner) says, ‘I’m so surprised, I’m so disappointed,’ — really?”

Valentine fielded questions from the audience and addressed Derek Jeter’s expected entrance into the Hall of Fame in 2020, stating Jeter would not go into the Hall with a unanimous vote, like Jeter’s former Yankees teammate, relief pitcher Mariano Rivera.

Valentine signed several autographs during the event, and also traded greetings with Wockenfuss when the old Detroit Tigers player walked into the building. The two played in the majors at the same time between 1975-79. Alteri also welcomed Wockenfuss, who is coping with dementia.

“Years ago, when I started my college coaching career I went to a coaching conference and you spoke at that conference,” Alteri told him. “We had a nice conversation and I said, “Hey, by the way, John, ‘how do you hit the curve ball?’ and you said, ‘Hit the fastball.’ And that was it. That was great advice. And in my coaching career, that’s all I told my players.”