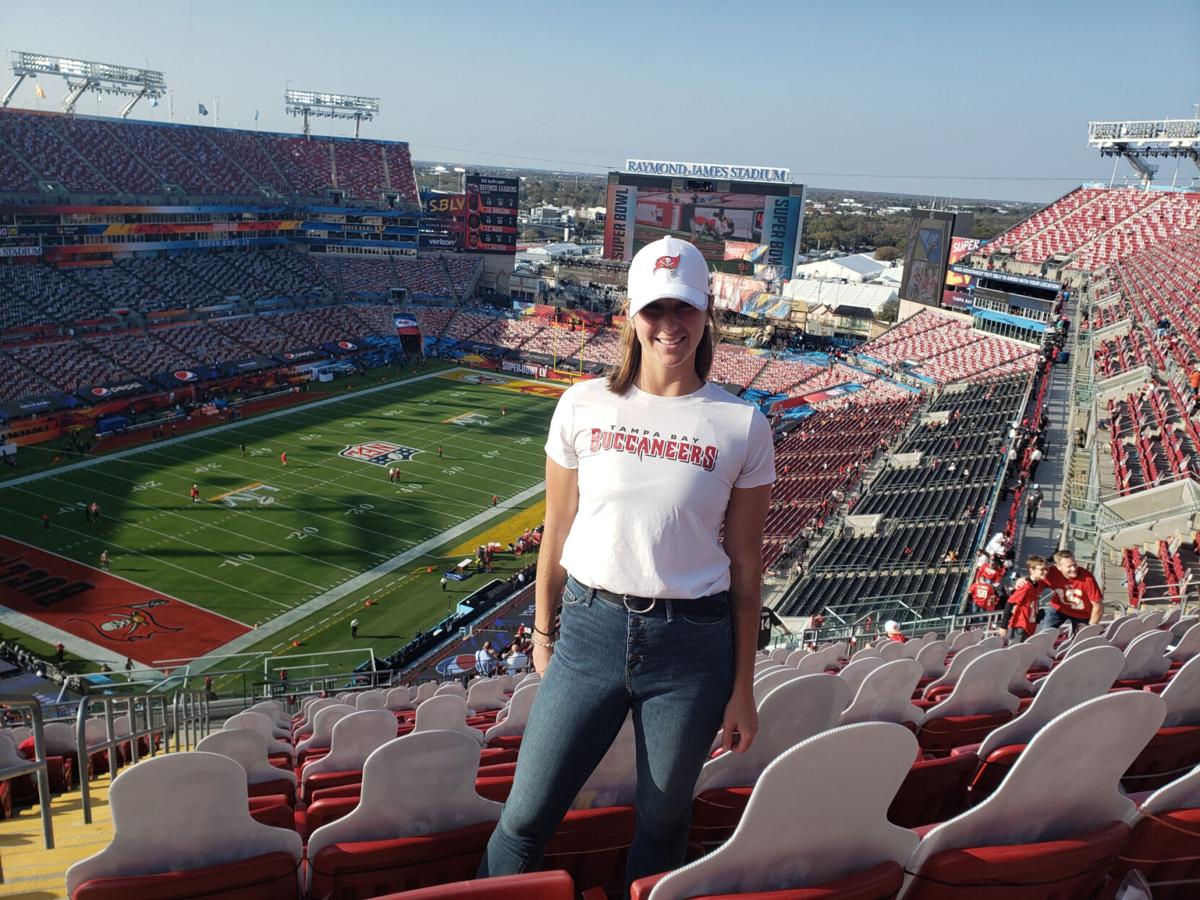 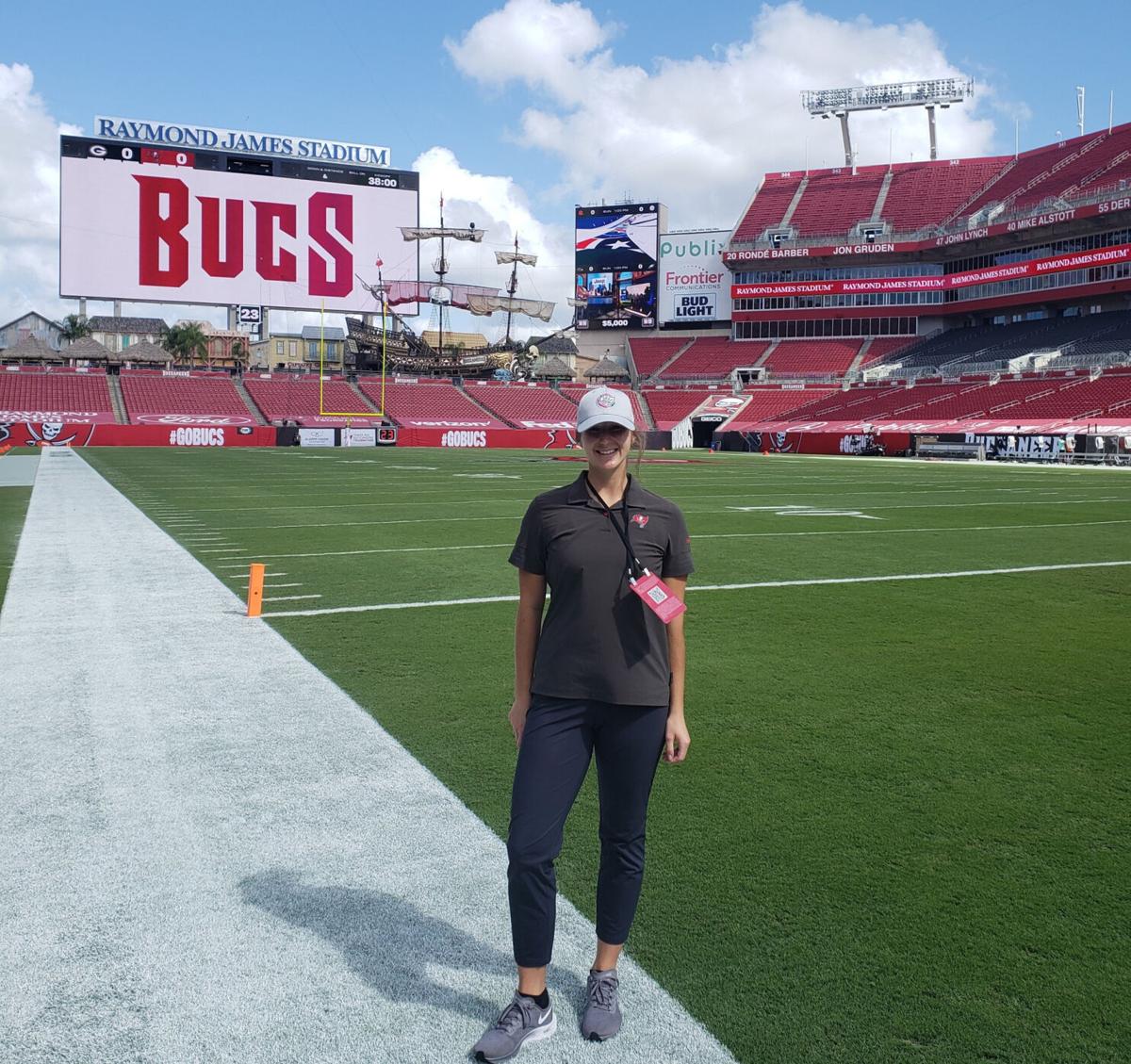 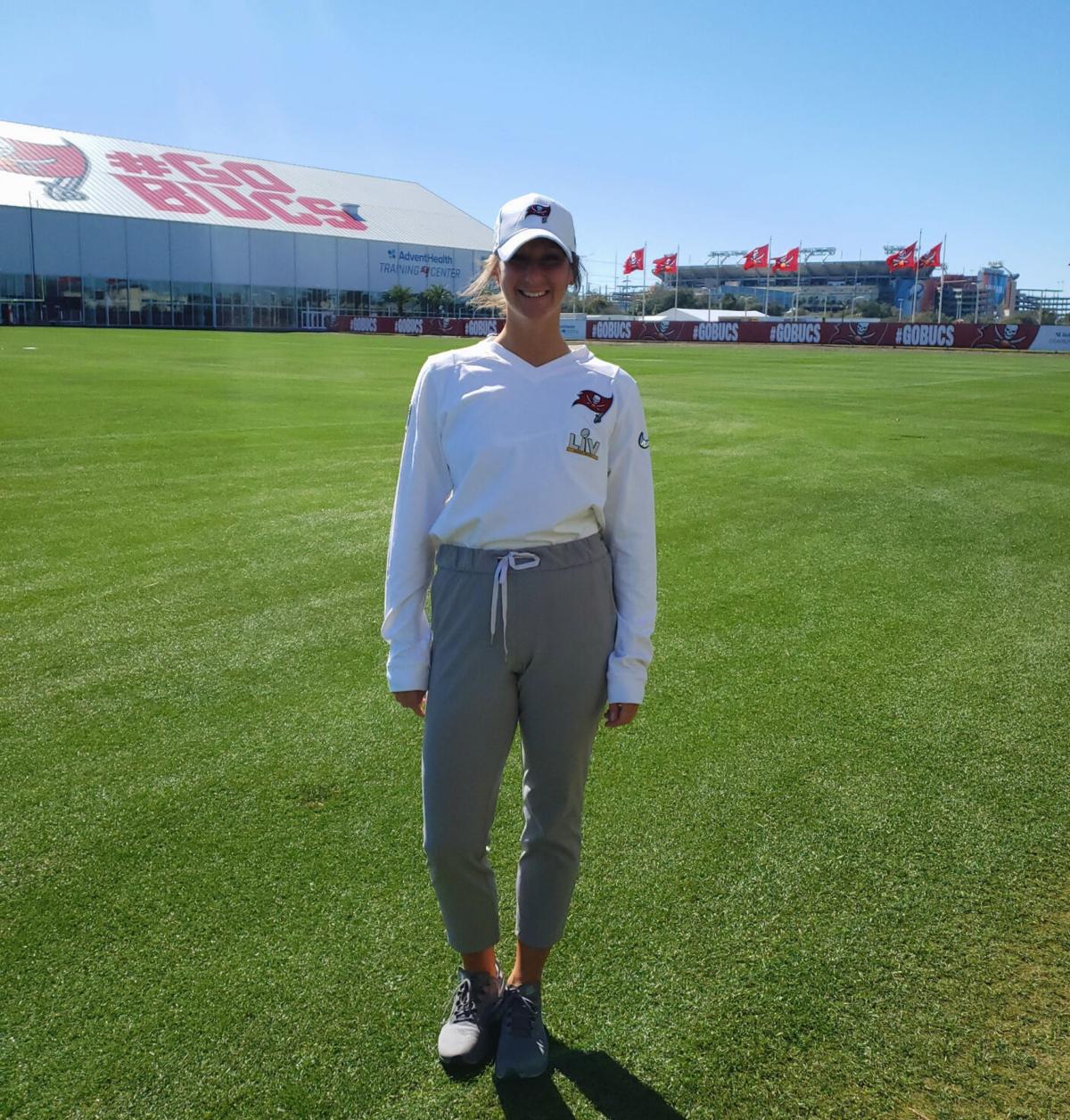 PULASKI — The Tampa Bay Buccaneers were propelled to victory in Super Bowl LV by newcomers at all levels, from Hall of Fame icons such as quarterback, Tom Brady, to crucial behind-the-scenes contributors like Pulaski High School graduate, Jessica Pastuf.

Pastuf wrapped up her first season on the Buccaneers performance nutrition staff by watching Brady lead Tampa Bay to a 31-9 victory over the Kansas City Chiefs at Raymond James Stadium in Tampa, Fla., on Feb. 7 to become the first NFL franchise to win the Super Bowl on its home field.

Pastuf graduated from Pulaski in 2014 and first developed a passion for nutrition, exercise, and sports while growing up as an aspiring student-athlete in the district.

She was hired by the Buccaneers last summer and reported on the first day of training camp in late July, just a few months after obtaining her master’s degree in sports nutrition from The University of Utah.

“This opportunity came up, so it was really in a matter of days where I packed up my car and drove across the country,” Pastuf said. “I didn’t really know what I was getting myself into, no one really knew if the season was going to happen, and of course it was a particularly exciting season brining (Brady) to the team and a lot of changes in the organization, so it was a really exciting time to become part of the staff.”

Pastuf works closely with Tampa Bay’s director of performance nutrition with a large portion of her time spent planning and executing meals with the in-house culinary staff prioritized to meet specific needs.

She helps plan at least 15-18 meals per week for every player, coach, and other team personnel for when they are at the practice facilities, the stadium before and after games, and in team hotels on the road.

Pastuf helps develop hydration recommendations for practices and games, ordering products and handling details from how many water bottles to take onto the field and where to place them.

“My favorite part of the job is inherently when people are eating with us,” Pastuf said. “We have the ability to influence their nutrition over a long period of time throughout the course of the season. I always find that to be special because, regardless, whether or not someone wants to learn more and really cares about it, if they’re eating with us, they have the opportunity to obtain good nutrition.”

Pastuf watched Super Bowl LV from the stadium and joined the world champion Buccaneers and their exhilarated staff afterward for the celebration, which has lasted for much of the past few weeks.

She worked from the Buccaneers sideline for home games but due to the NFL’s COVID-19 travel restrictions was unable to do so this year for away and neutral outings. Though the Super Bowl was played at their home stadium, the Buccaneers were required to follow the safety protocol outlined for a neutral-site matchup.

“To be in that kind of energy was just incredible and will stay with me for many years to come,” Pastuf said. “It’s incredibly humbling because there have been a lot of athletes on the Buccaneers team for a long time who we all know haven’t even been to a playoff game let alone win in the playoffs and make it to the Super Bowl, so just to be around those athletes and the amount of heart, emotion, dedication and drive that they all had, especially throughout those last few weeks, was just so empowering.”

Pastuf also participated in the socially distant boat parade on Feb. 10 along the bay with a series of public viewing areas. The prominent celebration created a number of classic moments, including Brady tossing the Lombardi Trophy to tight end Cameron Brate on a nearby boat, among others.

“From the outside perspective looking in, you see these NFL players who have experienced more than most people ever will, and for them to see that level of joy and excitement come out of that parade was so special too,” Pastuf said. “And to see the community come together, to see thousands of people along the river or on their own boats, it was just incredible.”

Pastuf attended the University of North Carolina at Greensboro and completed her undergraduate degree in nutrition, and then moved to Utah for her master’s studies.

She worked with the Utah football and ski teams while completing her master’s project with a dietician from the U.S. ski and snowboard Olympic Training Center on campus. She also worked a part-time job with the NBA’s Utah Jazz beginning in her second year of graduate school.

When the COVID-19 pandemic hit last March, Pastuf opted to move closer to family in the Tampa Bay area and upon graduating last May, reached out to a dietician on the Buccaneers staff seeking opportunities to contribute.

Pastuf soon heard back about a potential job opening and unsure of her future with the Jazz upon the planned NBA restart, eventually accepted the full-time offer to join the Buccaneers staff in July.

The position Pastuf walked into became both more complicated and critical to the overall operation for the franchise in her first season on the job.

She was unable to join the team in traditional fashion for away games due to NFL safety protocol, so she flew separately on commercial fights to help prepare meal plans and catering areas then flew home before the team arrived.

“That created inherent hurdles for our nutrition department in general just being down a person that would normally have been there on the road, but to the same extent, with all the different restrictions in place for food service during COVID, my job became all that much more important,” Pastuf said. “It was really cool to be a part of adapting everything that we do.”

Unique measures she helped oversee include installing Plexiglas in all serving stations, added sanitation measures by all workers, and packaging all meals in to-go containers, just to name a few.

Pastuf recalled first sparking an interest in the nuances of exercise and nutrition after receiving letters ahead of Pulaski modified soccer tryouts encouraging players to train and be conditioned in advance.

She later participated in a slew of sports in the district — soccer, basketball, volleyball, softball, cross country and track and field at various points — typically cast in a leadership position that helped instill the skills she utilizes daily to help NFL players meet their nutritional goals.

“Her work ethic was ridiculous, that’s one of the things I really remember about Jess,” said Pastuf’s former cross country coach and teacher, Mike Bateson, who is now the Pulaski district principal.

“She had a quick wit, was always super polite and a really nice kid to be around, but her work ethic, I would place it in the top one percent of all the kids I’ve ever seen in schools.”

Pastuf credits a meeting with Jack Jennings — her former band director, coach and teacher who still works in the Pulaski district as the instrumental music teacher — for guiding her career path. As a high school senior, Pastuf said she met with Jennings for an advisory meeting in a panic over choosing her college major.

Jennings asked her to quickly answer a few questions without thinking, starting by listing her passions, to which she remembered blurting out: “Diet and exercise.” She soon applied for the nutrition program at UNCG.

“Sometimes I find there are kids in high school that are great students, great athletes, great musicians, they’re good at everything, so when the time comes to pull the plug, they have no idea what they want to do because they’ve been exposed to so many things,” Jennings said. “That was clearly Jessica’s dilemma.”

Jennings and Bateson were among the many district members who watched Super Bowl LV with a renewed interest in support of Pastuf.

Bateson said that, as a dedicated Buffalo Bills fan, he had a difficult time deciding whether to root for the team that had just knocked off his favorite in the AFC Championship — the Kansas City Chiefs — or the unit now led by his former divisional nemesis during Brady’s time with the New England Patriots.

His learning of Pastuf’s role on the Tampa Bay Buccaneers staff served as the tiebreaker.

“That’s when it was like: ‘Oh yeah, OK, Tampa Bay has to win it,’” Bateson said. “I thought it would be so cool to see that kid experience success like that on that level.”

Pastuf expressed gratitude for the hometown support and said she has received a surprising number of congratulatory messages from friends and former mentors in Pulaski since the Super Bowl.

She sent Jennings a photo of her posing with the Lombardi Trophy just a few hours after the victory with a message thanking him and relaying her appreciation.

“Pulaski is always going to be home,” Pastuf said. “The community support that my family and I received as soon as we moved to Pulaski was just incredible, and to still have people reaching out, I’ve heard from so many old professors and close classmates and neighbors, and just people that I knew, so to see that continued support when I haven’t been back there in like seven years, is just really special to me.”