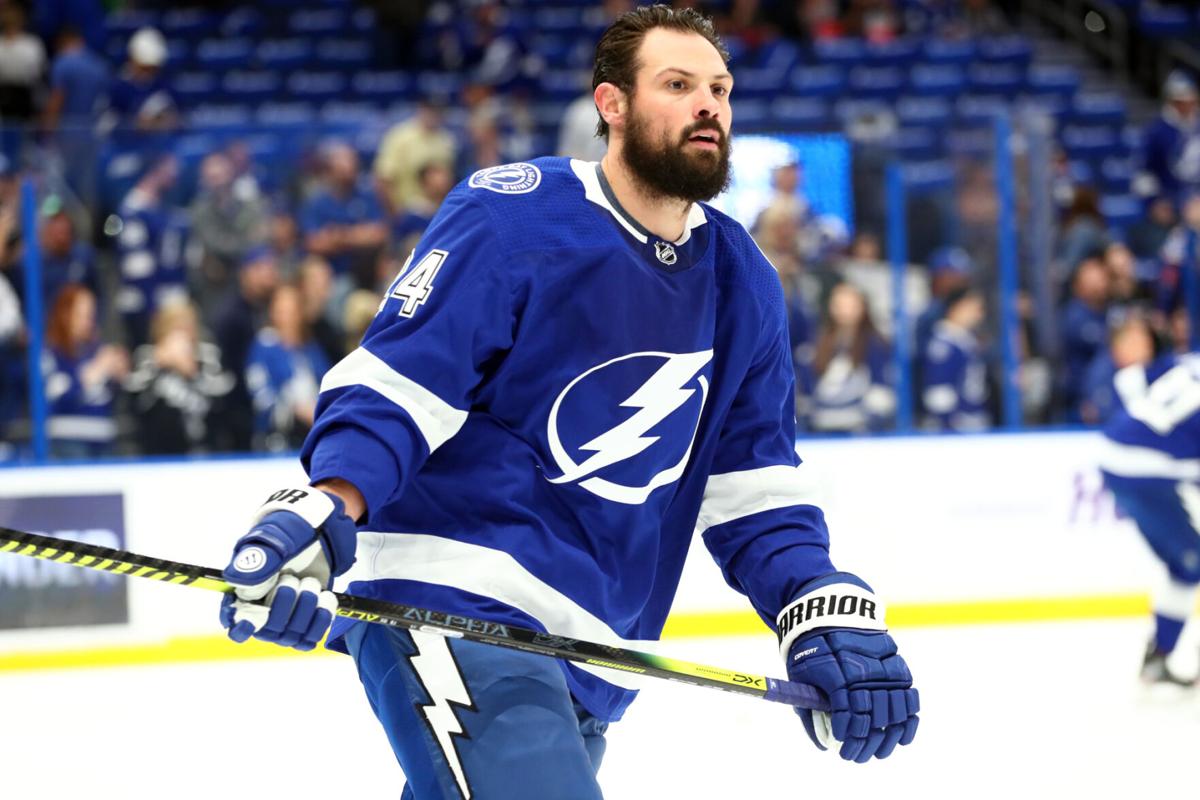 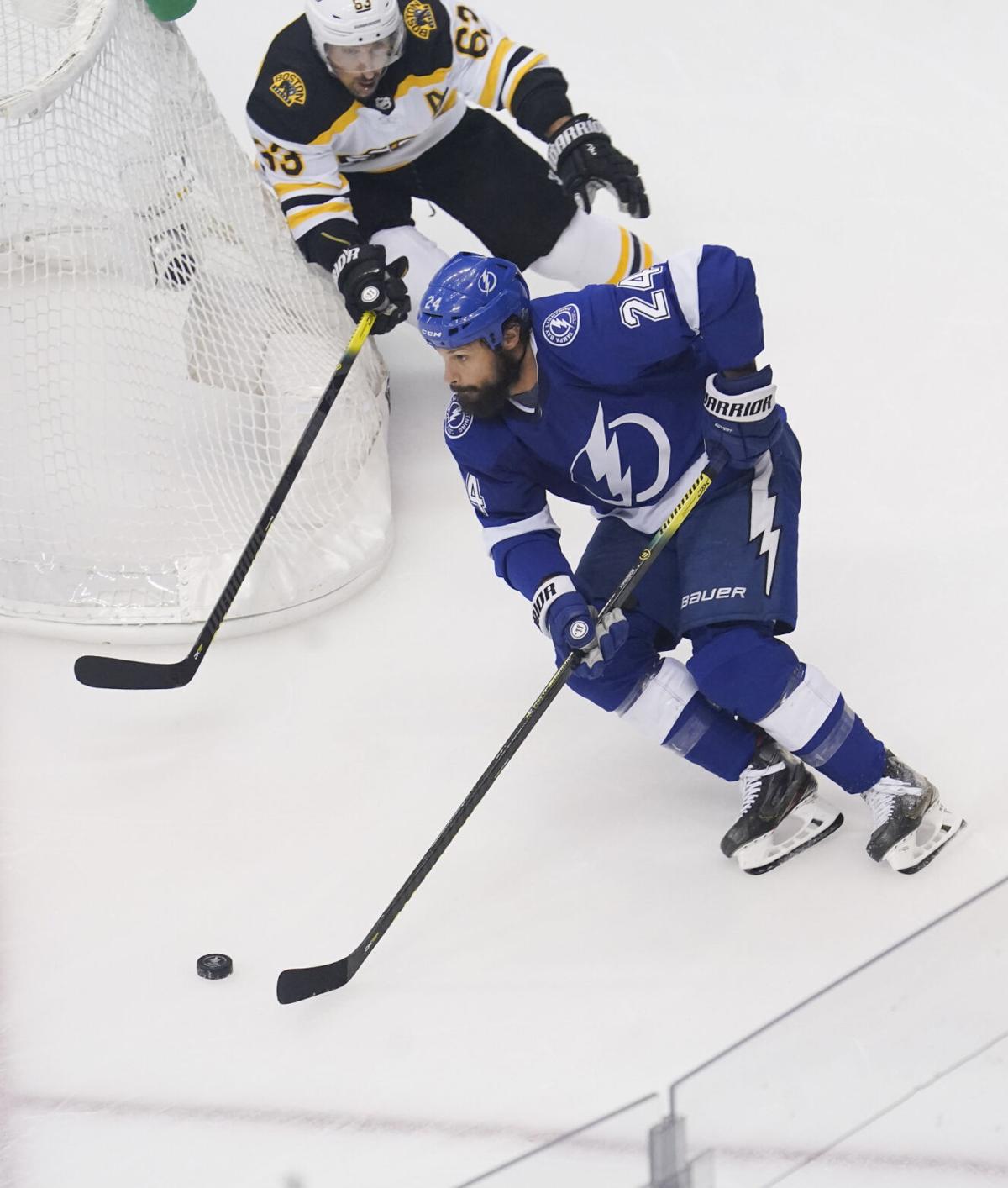 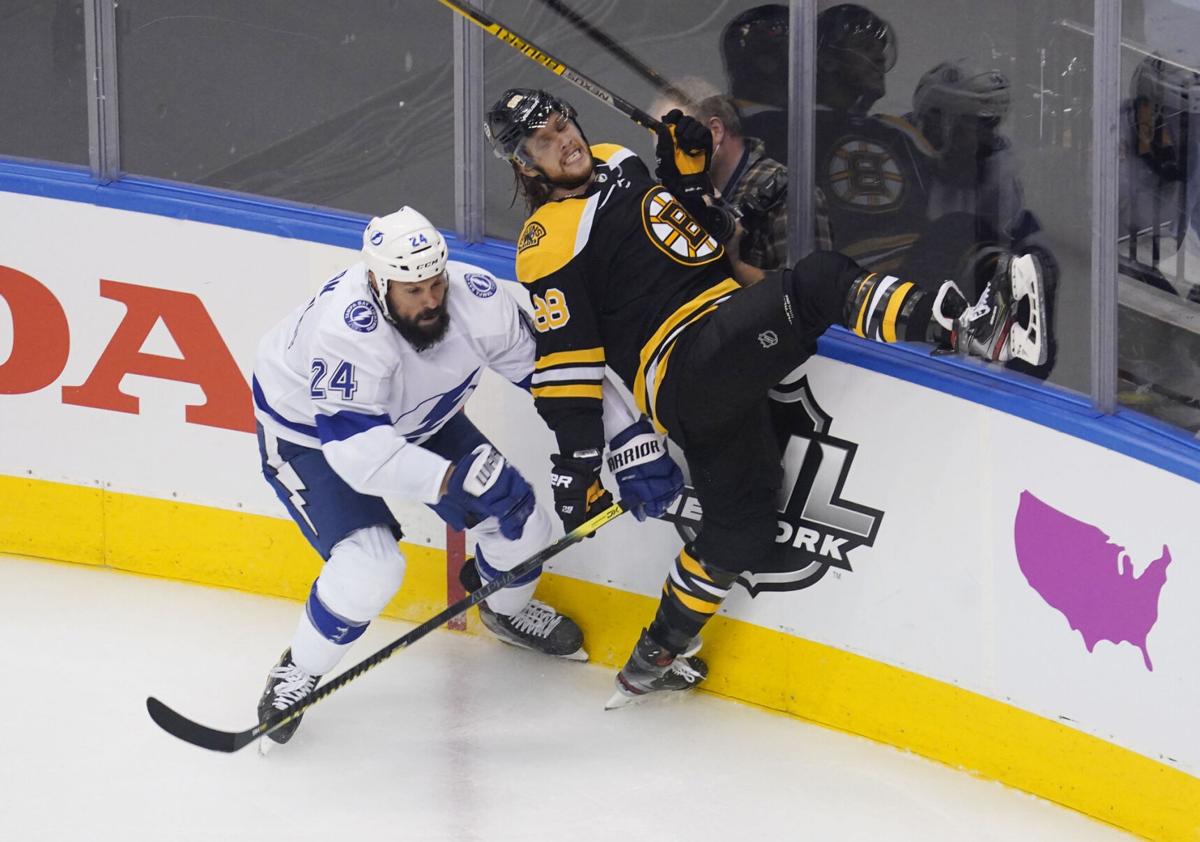 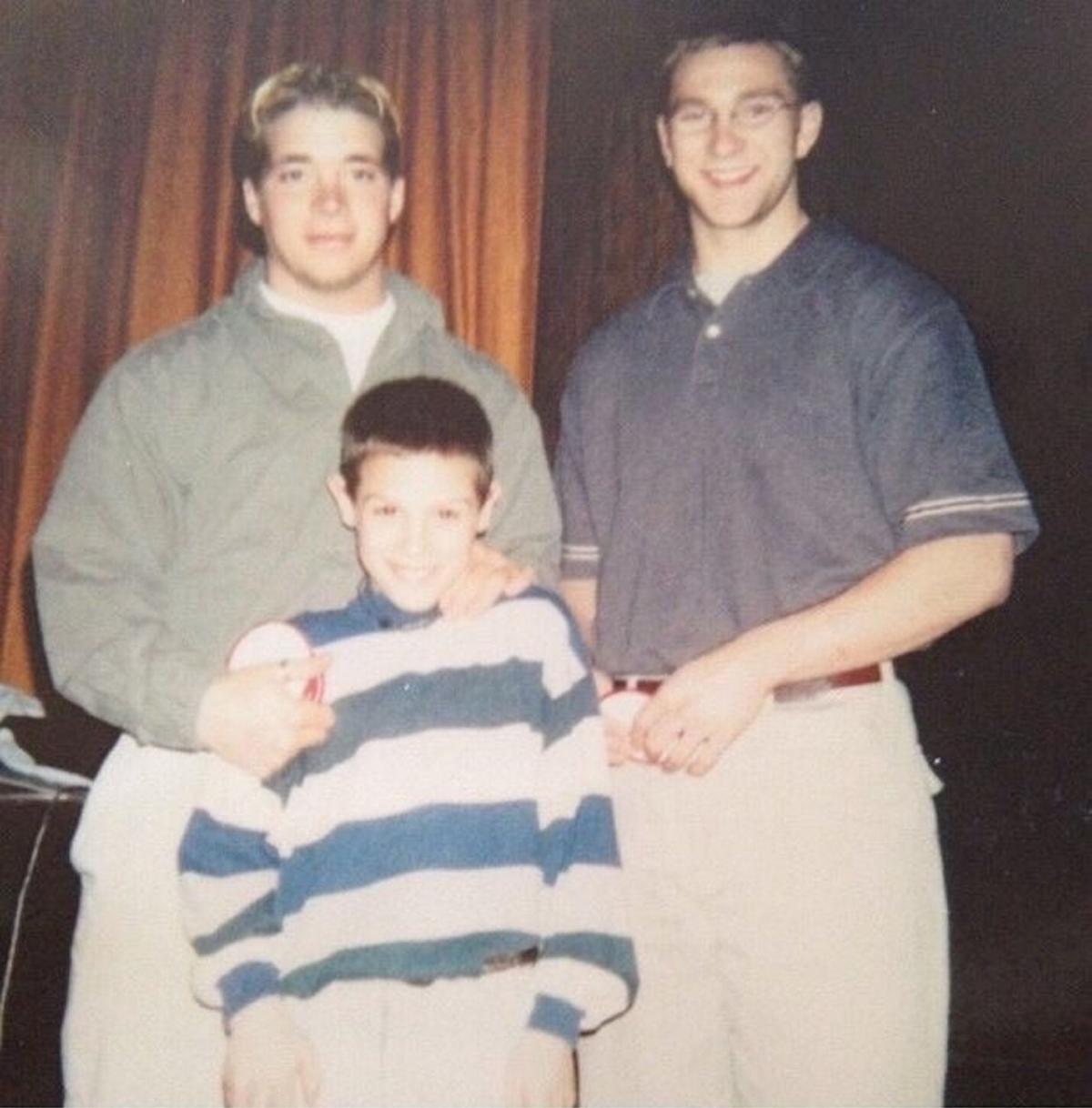 A young Zach Bogosian stands with Clarkson hockey players Matt Reid, top left, and Erik Cole. Bogosian, as a child, was a regular presence in the Clarkson locker room as he was friends with head coach Mark Morris’ son, Kevin. Provided by Matt Reid 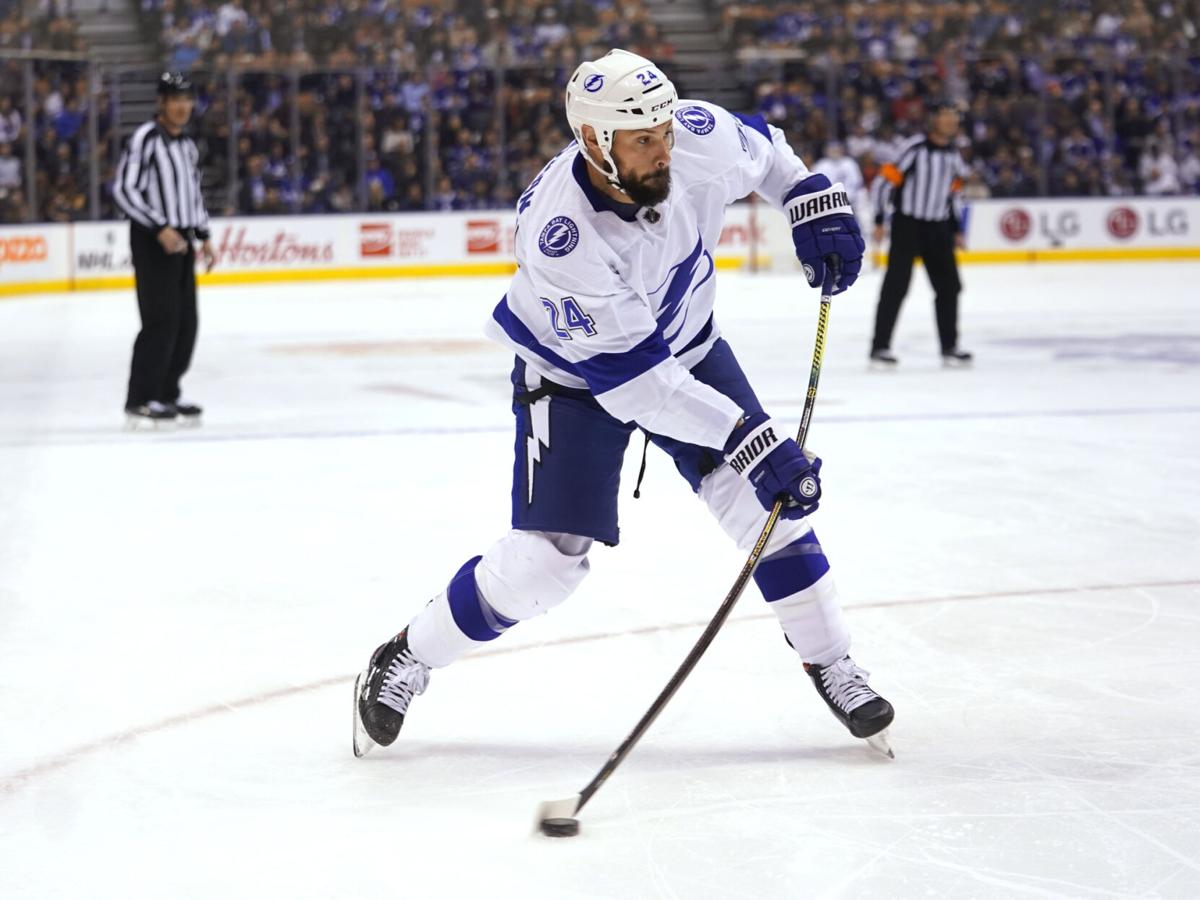 A young Zach Bogosian stands with Clarkson hockey players Matt Reid, top left, and Erik Cole. Bogosian, as a child, was a regular presence in the Clarkson locker room as he was friends with head coach Mark Morris’ son, Kevin. Provided by Matt Reid

MASSENA — If the Tampa Bay Lightning win the Stanley Cup it is likely that the Cup would make three visits to the north country, as each member of the winning team gets to spend a day with it during a traditional offseason.

The Lightning features 30-year-old defenseman Zach Bogosian, a Massena native who is making his first postseason appearance in an 11-year career, assistant coach Derek Lalonde, who is from Brasher Falls, and scout Brian Putnam, who is from Potsdam.

“We are really happy for him,” said Bogosian’s father Ike, who has been following his son in the NHL playoffs, along with wife Vicky. “It’s been a long wait for him, that’s for sure. He’s in a good spot for himself, which is good.”

Bogosian was the highest draft pick of any north country athlete in the four major sports — the NHL, NFL, NBA and Major League Baseball — but it took him 644 career games in the NHL to make the postseason. Only two other active NHL players, Ron Hainsey (907 games) and Jay Bouwmeester (764) have played longer without reaching the playoffs.

Bogosian, who signed a 1-year, $1.3 million deal with Tampa Bay, was taken with the third overall pick in the 2008 draft by the Atlanta Thrashers. After his third season with the team, the franchise moved to Winnipeg and became the second version of the Winnipeg Jets. During the 2014-15 season he was traded to the Buffalo Sabres, where he stayed until he was released after playing 19 games this season.

Tampa Bay picked him up as a free agent in February and he played in eight games before the COVID-19 pandemic caused the season to stop in March. He has played in all the Lightning’s playoff games so far and he is a victory away from the Eastern Conference finals as Tampa Bay holds a three-games-to-one lead over Boston in the best-of-seven series after Saturday’s win.

Bogosian is attempting to be the third person from Massena to be part of a Stanley Cup championship. Former Clarkson and St. Lawrence University coach Mark Morris won two Stanley Cup rings with the Los Angeles Kings organization as head coach of their American Hockey League affiliate in Manchester, N.H.

Massena’s Matt Meacham is a video coach with the Chicago Blackhawks and won a Stanley Cup ring in 2015.

“If you’ve ever been close to (a Stanley Cup title) and see what it does for people’s careers, it would be fantastic to know he was with a special group and pulled his weight to achieve the ultimate goal in the game,” Morris said. “There are so many elements, people don’t really understand the complexity of what a small margin of error there is at that level. There’s luck, skill, talent and so many different variables that go into a Stanley Cup championship. You have to stay healthy and get lucky.”

Morris shares more in common with Bogosian than hockey. Morris and Ike Bogosian have been best friends since they played Little League Baseball in Massena as 10-year-olds. When each set of families were raising young kids, they were almost like one combined family. Three of Ike Bogosian’s sons were regulars in the Clarkson men’s hockey locker room when Morris was coach for the Golden Knights.

“Zach was in the locker room with (Morris’s son Kevin) every day,” said former Clarkson player Matt Reid, another Massena native. “Those two were like two peas in a pod, running around the locker room. I remember him always being in there, even in coaches and players meetings. Zach was always in the room sitting next to me or Erik Cole.”

Cole, as well as his Clarkson teammate Willie Mitchell, were still in the NHL by the time Bogosian made his league debut, which was a special thrill for him, according to his father Ike.

“(Cole and Mitchell) would talk to him after a game,” Ike Bogosian said. “They were a lot older than Zach was, to him it didn’t matter. I would run into Erik here and there and he always asked about my boys. There’s always a connection there.”

Zach Bogosian and his family — he is married to a former professional soccer player, Bianca D’Agostino and has three children — often spend offseasons in Minnesota but make regular trips back home to the north country.

Before he arrived with Tampa Bay, he struggled to stay on the ice with Buffalo. In December, Buffalo made him a healthy scratch for the first time in his career and Bogosian responded by requesting a trade. In February, he was a healthy scratch over seven games and the Sabres then assigned him to the AHL. When Bogosian declined to report, the Sabres announced his suspension and his contract was terminated. Sabres general manager Jason Botterill said that he had tried to find a new team for Bogosian but was unable to find a trade partner.

“Life’s full of adversity,” Morris said. “They say it’s how you respond to it that determines how people look at you and remember you. He’s been able to (bounce back). Being so talented at such a young age took its toll on his joints and his body. He was quick to rehab and get himself back in a routine that would prepare him for his return. He’s aligned himself with a lot of good people along the way.”

Trips to see grandkids, and COVID-19 restrictions, means the Morris and Bogosian families are visiting as often as they once did. But they remain as close as ever.

“We have to interact from a distance,” said Morris, who has a home on the St. Lawrence River. “I told Ike to swing by on his boat and I’ll flip him a beer from my dock.”

Said Ike Bogosian, “Our families are really close and always have been. We might not see each other as often, but when we see each other it’s like we saw each other yesterday. It was fun when the kids were all growing up. They were at our house and ours were at theirs.”