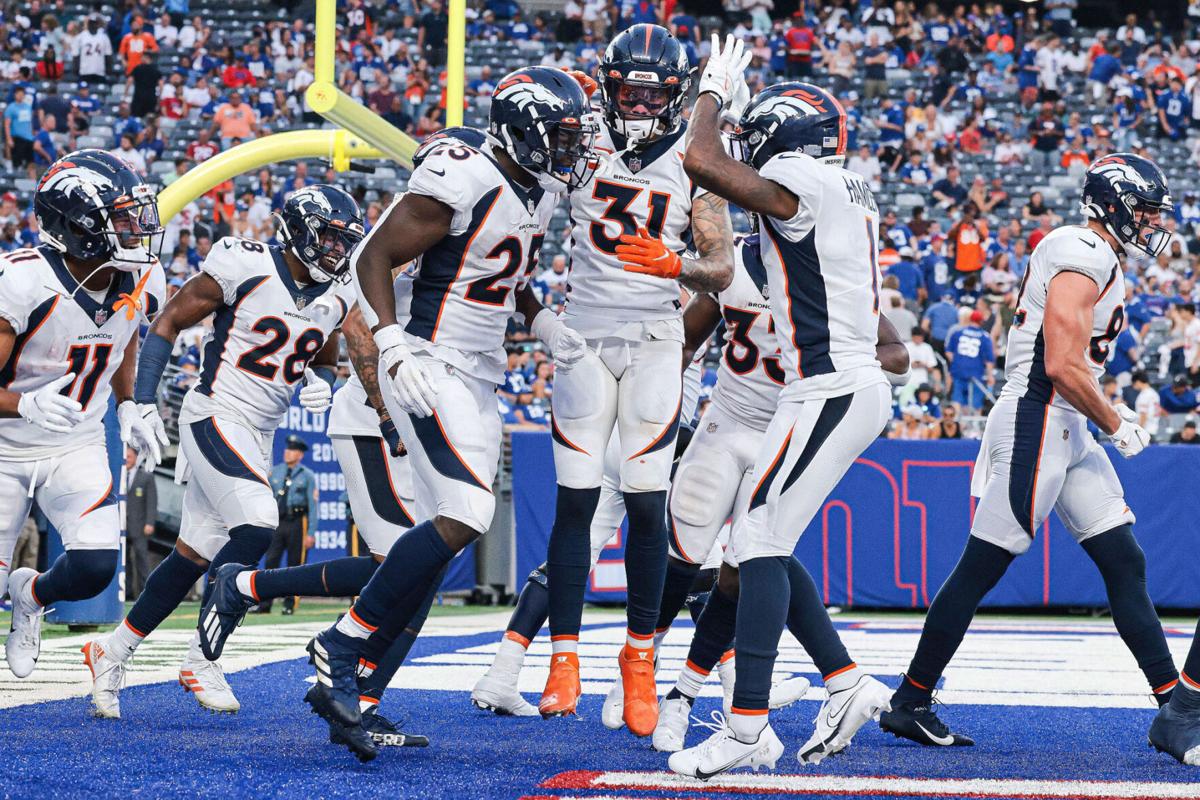 Broncos running back Melvin Gordon, front left, celebrates his touchdown with teammates during the second half against the New York Giants on Sunday at MetLife Stadium. Vincent Carchietta/USA TODAY Sports 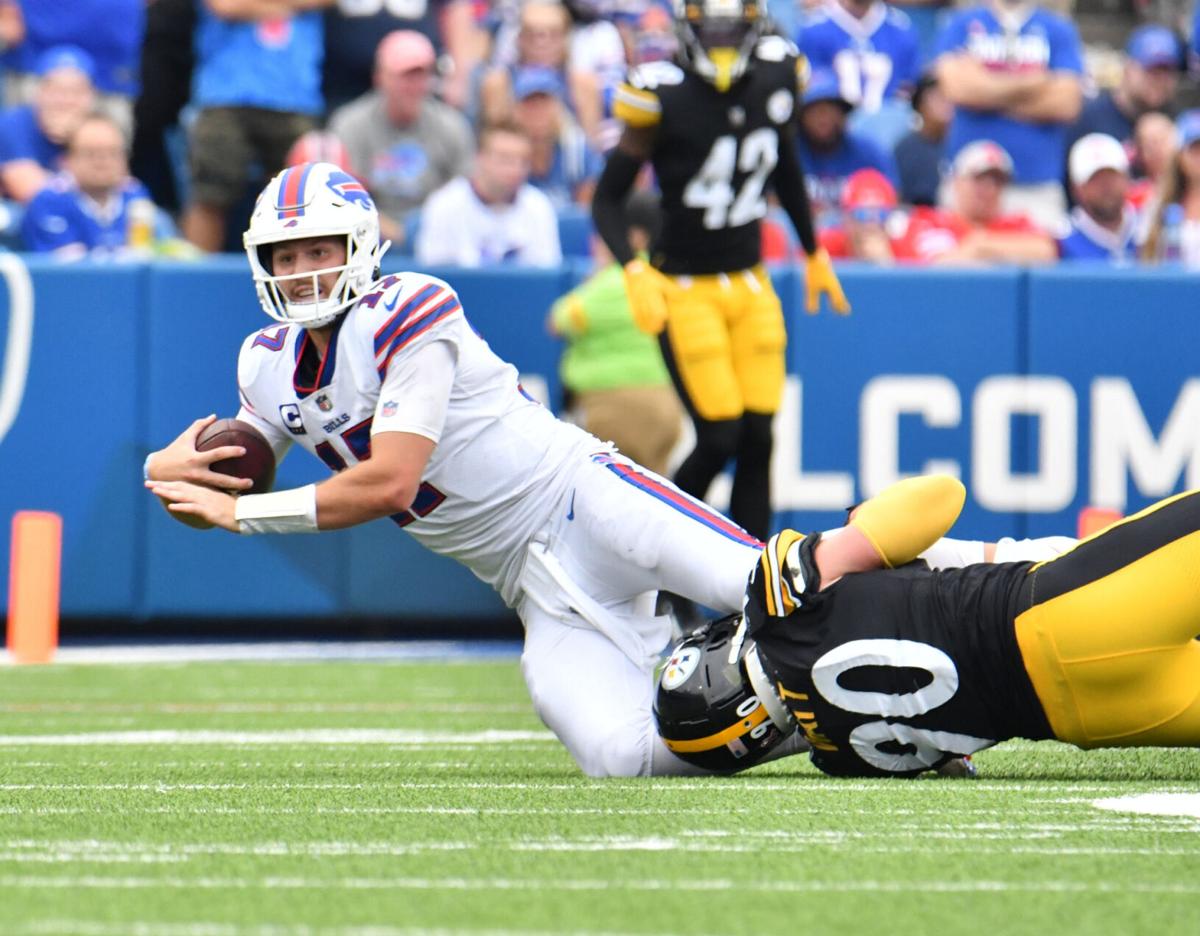 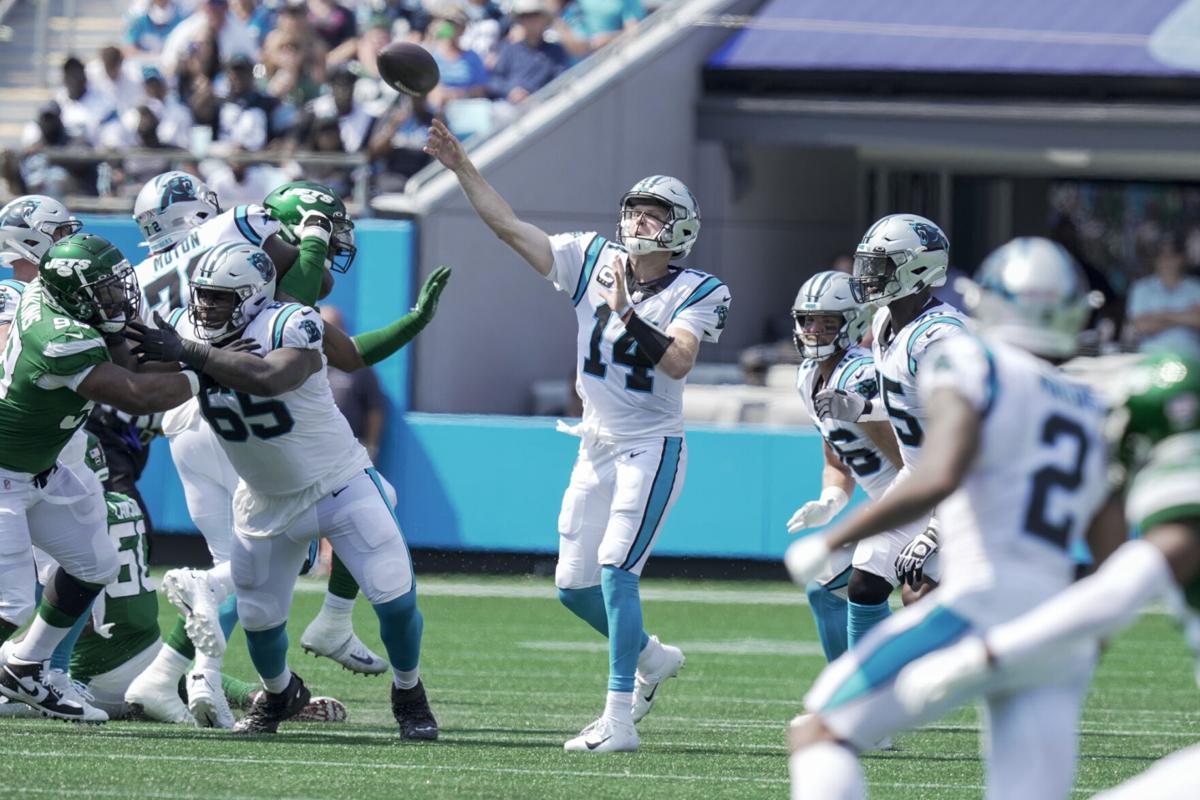 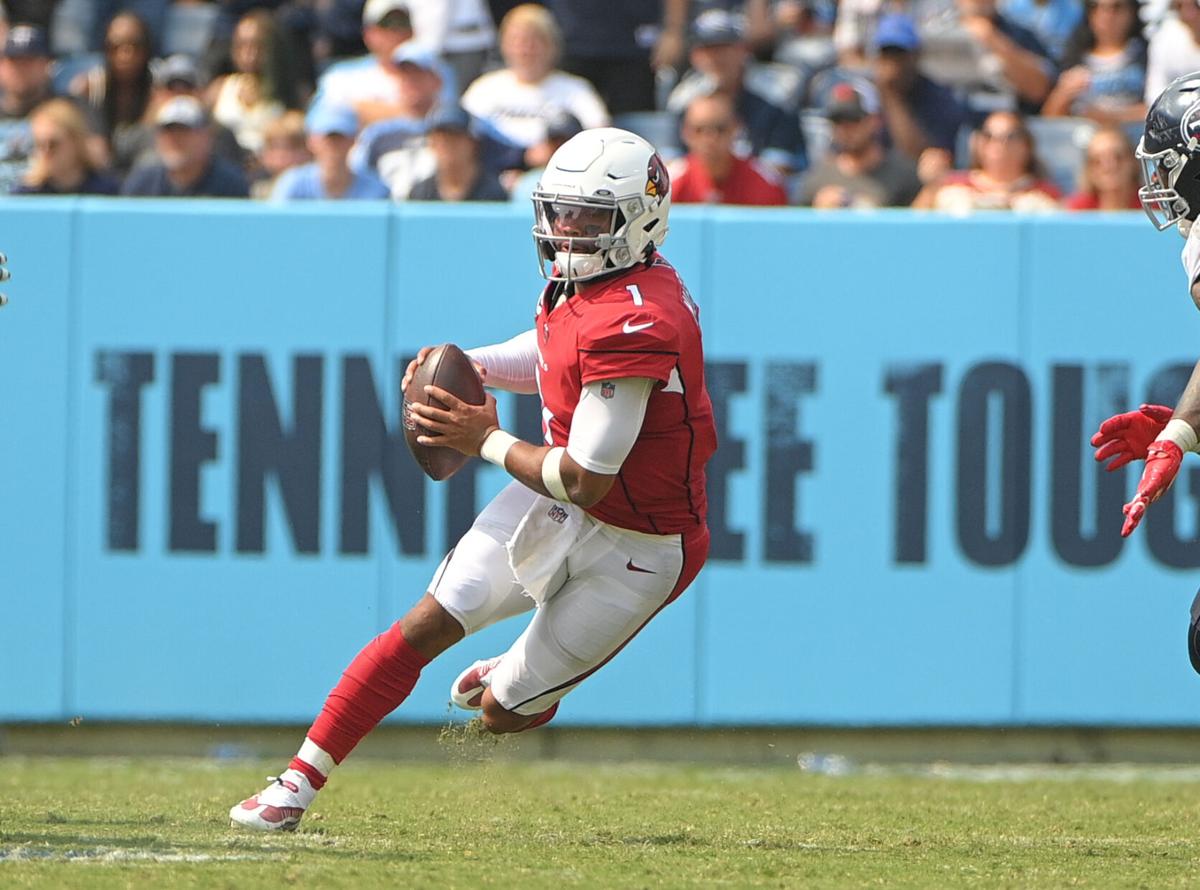 Arizona Cardinals quarterback Kyler Murray runs with the ball against the Tennessee Titans during the second half Sunday at Nissan Stadium. USA TODAY Sports 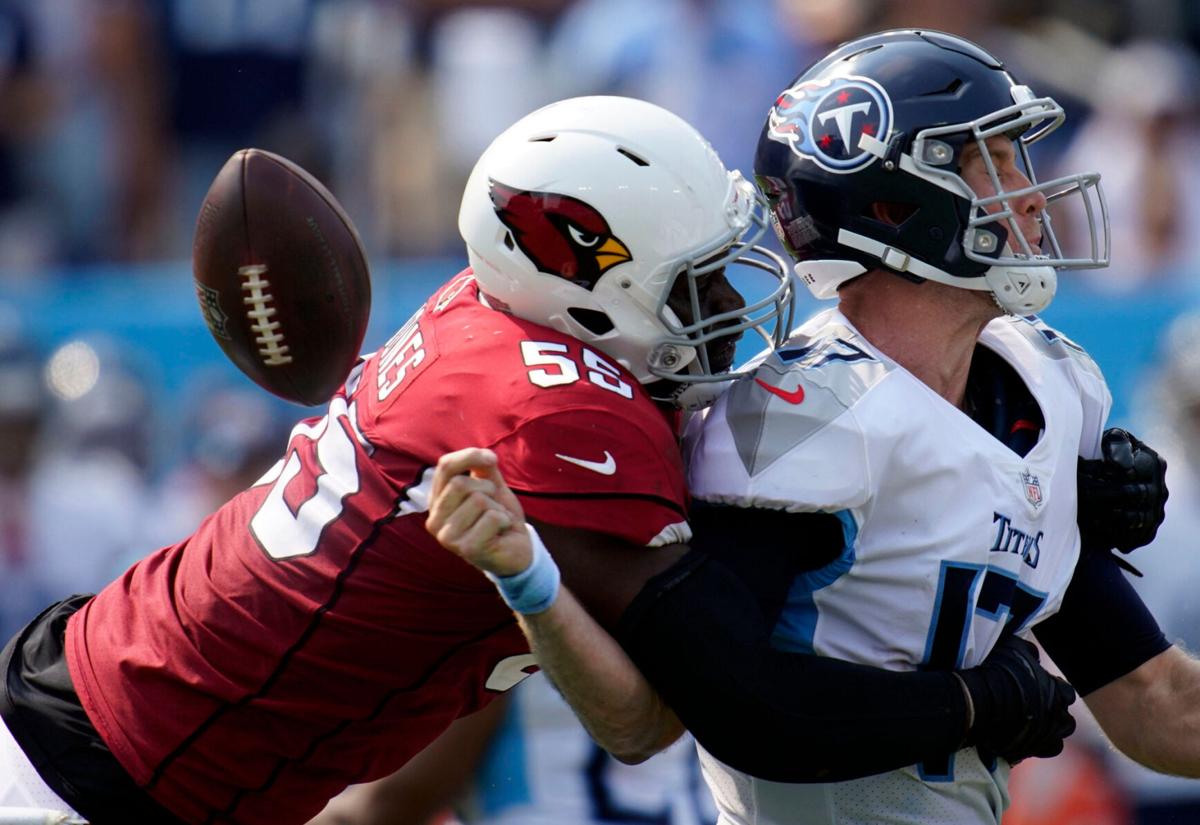 Broncos running back Melvin Gordon, front left, celebrates his touchdown with teammates during the second half against the New York Giants on Sunday at MetLife Stadium. Vincent Carchietta/USA TODAY Sports

Arizona Cardinals quarterback Kyler Murray runs with the ball against the Tennessee Titans during the second half Sunday at Nissan Stadium. USA TODAY Sports

Teddy Bridgewater threw for 264 yards and two touchdowns, Melvin Gordon finished it off with a 70-yard TD and the Denver Broncos recorded a 27-13 victory over the host New York Giants on Sunday in East Rutherford, N.J.

Bridgewater delivered an extremely accurate performance in his Denver debut after winning the quarterback job from Drew Lock in preseason. He completed 28 of 36 passes and helped the Broncos maintain possession for just over 35 minutes.

Gordon finished with 101 yards on 11 carries and his long run down the left side with 4:37 remaining gave the Broncos a 27-7 lead and sent many heading for the exits. Gordon’s big run occurred one play after New York rookie Azeez Ojulari was called for roughing the passer on Bridgewater.

The only bad news for the Broncos was losing receiver Jerry Jeudy to a lower leg injury with 8:50 remaining in the third quarter. Jeudy finished with six catches and 72 yards.

New York quarterback Daniel Jones completed 22 of 37 passes for 267 yards. He also had a rushing TD with no time remaining but Jones also fumbled deep in Denver territory late in the third. Denver took advantage as the next possession resulted in Brandon McManus’ second field goal.

Sterling Shepard caught a 37-yard TD for New York, which got only 26 yards on 10 carries from Saquon Barkley in his return from a torn right ACL sustained last season in Chicago.

Dominant defense and a special teams score helped the Pittsburgh Steelers overcome a sleepy first half and knock off the Buffalo Bills in Orchard Park.

The Steelers’ special teams crashed a defensive struggle with 9:45 left on the game clock. Safety Miles Killebrew blocked Matt Haack’s punt at the Buffalo 10-yard line and Ulysees Gilbert III scooped up the ball for Pittsburgh’s 20th unanswered point, all in the second half.

Wide receiver Diontae Johnson made a juggling catch in the back corner of the end zone to give the Steelers their first lead, 13-10, with 11:19 to play.

Steelers linebacker T.J. Watt had two sacks and Bills quarterback Josh Allen completed 30 of 51 passes for 270 yards and a touchdown.

Chris Boswell netted a 45-yard field goal to push the Steelers ahead 23-13 with 2:42 remaining in the game.

Darnold had a passing touchdown and rushing touchdown against his former team, with 279 yards passing by going 24 of 35 with no interceptions.

The outcome also upended the Jets head coaching debut of Robert Saleh, who had been a San Francisco 49ers assistant coach.

The Jets managed only 252 yards of total offense while Wilson was sacked six times for minus-51 yards.

Darnold also made good use of running back Christian McCaffrey, the Carolina standout who was limited to three games last season because of injuries.

Jones, who missed the last 11 games of 2020 with a biceps injury, almost single-handedly dictated the game's tempo with incessant pressure on Tennessee quarterback Ryan Tannehill. Jones logged three sacks and a forced fumble before the first quarter ended.

The forced fumble led to Murray's first scoring strike, a 1-yarder to DeAndre Hopkins that gave Arizona a 10-0 lead less than seven minutes into the game. The duo hooked up again for a 17-yard touchdown with 10:59 left in the first half to up the margin to 17.

Joe Burrow found C.J Uzomah with a 32-yard pass on fourth-and-short late in overtime to set up the Cincinnati Bengals' season-opening victory against the Minnesota Vikings in Cincinnati.

The Vikings (0-1) had the ball on the Cincinnati 38 late in OT, but Dalvin Cook's fumble was recovered by Germaine Pratt for the game's only turnover to set up the Bengals' winning drive.

Minnesota's Greg Joseph hit a career-long 53-yard field goal on the last play of regulation to push the game into overtime at 24-24.

Burrow was sharp in his return from a torn ACL, completing 20 of 27 passes for 261 yards and two touchdowns. Joe Mixon rushed for 127 yards and a touchdown on 29 carries.

Jameis Winston tied a career-high with five touchdown passes and New Orleans intercepted Aaron Rodgers twice in the Saints’ victory in the season opener for both teams in Jacksonville, Fla.

Winston made his first start for the Saints in the wake of Drew Brees’ retirement after a 15-year tenure and passed for just 148 yards, but he completed 14 of 20 with no interceptions in a much more efficient performance than reigning MVP Rodgers had.

Rodgers completed 15 of 28 passes for 133 yards and a 36.8 passer rating before being replaced by Jordan Love in the fourth quarter.

The game was moved to Jacksonville from the Caesars Superdome after Hurricane Ida damaged New Orleans two weeks ago. The Saints have practiced in the Dallas-Fort Worth area since canceling their preseason finale.

Patrick Mahomes passed for 337 yards and three touchdowns, all in the second half, as the Kansas City Chiefs didn’t lead until the fourth quarter but edged the Cleveland Browns at Kansas City, Mo.

Cleveland punter Jamie Gillan failed to handle a snap with 8:42 left in the fourth quarter, and the Chiefs tackled him for a fourth-down loss at the Browns’ 15. Mahomes connected with Travis Kelce three plays later for an 8-yard touchdown and a 33-29 lead with 7:04 remaining.

The rally gave the Chiefs their 15th consecutive September victory as they begin their quest for a third straight AFC title. Mahomes finished 27 of 36 while also throwing an 11-yard TD to Kelce and a 75-yard scoring bomb to Tyreek Hill.

Baker Mayfield played brilliantly, passing for 321 yards while going 21-of-28 to fuel the Browns, who lost at Kansas City in the divisional round of the AFC playoffs last season.

Tua Tagovailoa passed for 202 yards and a go-ahead three-yard touchdown to rookie Jaylen Waddle as the Miami Dolphins spoiled Patriots quarterback Mac Jones’ NFL debut with a win over New England in the season opener in Foxborough, Mass.

Waddle, the No. 6 overall pick in this year’s draft, grabbed his first career touchdown catch with 10:51 remaining in the third quarter to put Miami on top for good at 17-10. Nick Folk’s 42-yard field goal with 2:50 left in the third and another from 33 yards out at 10:36 of the fourth pulled New England within 17-16.

Tagovailoa, who also had a rushing touchdown, finished 16-for-27 passing and was also intercepted by New England defensive back Jonathan Jones with 8:07 to play in the fourth. Mac Jones and the Patriots drove 41 yards before running back Damien Harris lost a fumble at the Dolphins’ 11-yard line.

Mac Jones, the No. 15 overall pick in this year’s draft, completed 29 of 39 passes for 281 yards and a touchdown in his pro debut.

Tyrod Taylor passed for 291 yards, 229 in the first half, while the Houston Texans matched their defensive interceptions total from all of last season in their victory over the Jacksonville Jaguars at NRG Stadium in Houston.

Taylor, making his first start for the Texans (1-0) in place of inactive three-time Pro Bowl quarterback Deshaun Watson, excelled with his blend of elusiveness and daring. He finished 21 of 33 and tossed a pair of touchdowns to pace a Texans offense that amassed 449 yards.

Jaguars quarterback Trevor Lawrence made his NFL debut and finished with 332 yards and three touchdowns in addition to three picks.

Taylor had touchdown passes of seven yards to David Johnson and eight yards to Danny Amendola, with the second scoring strike providing the Texans a 27-7 lead with eight seconds remaining in the first half.

Russell Wilson threw four touchdown passes, two to Tyler Lockett, as the Seattle Seahawks opened their season with a victory against the Indianapolis Colts in Indianapolis.

Wilson quickly took to new offensive coordinator Shane Waldron's system, putting up a perfect passer rating of 158.3 in the opening half when he completed 9 of 11 passes for 166 yards and three TDs in guiding Seattle to a 21-10 lead.

Tight end Gerald Everett scored on a 9-yard catch and wideout DK Metcalf on a 15-yarder for Seattle. The latter, with 6:45 remaining, gave Seattle a 28-10 advantage.

The Seahawks spoiled the Indianapolis debut of quarterback Carson Wentz, who was 25 of 38 for 251 yards and two touchdowns, both to Zach Pascal.

Making his first start in a season opener, Justin Herbert completed 31 of 47 passes for 337 yards and a touchdown pass, leading Los Angeles to a6 victory against the Washington Football Team in Landover, Md.

Jalen Hurts passed for 264 yards and three touchdowns to help the Eagles notch a solid victory over the Atlanta Falcons in Atlanta.

Heisman Trophy winner DeVonta Smith caught six passes for 71 yards and one touchdown in his NFL debut, and the Eagles (1-0) outclassed the Falcons (0-1) in a matchup featuring two first-time head coaches in Philadelphia's Nick Sirianni and Atlanta's Arthur Smith.

Jimmy Garoppolo rebounded from a first-snap fumble to throw for 314 yards and Trey Lance tossed a touchdown pass on his first NFL attempt as the San Francisco 49ers held on for a victory over the Detroit Lions in Detroit.

Still down 41-17 with 9:58 to play, Goff led a desperation rally that produced two touchdowns and a pair of two-point conversions, making it a one-score game at 41-33 with 1:10 left.

Matthew Stafford completed 20 of 26 passes for 321 yards and three touchdowns in his team debut to lead the Los Angeles Rams to a win over the Chicago Bears in Los Angeles.

Van Jefferson, Cooper Kupp and Robert Woods each hauled in touchdown passes for Los Angeles (1-0). Darrell Henderson Jr. added 70 yards and a touchdown on the ground.

David Montgomery had 16 carries for 108 yards and a touchdown to lead the offensive attack for Chicago (0-1). Andy Dalton completed 27 of 38 passes for 206 yards and an interception.