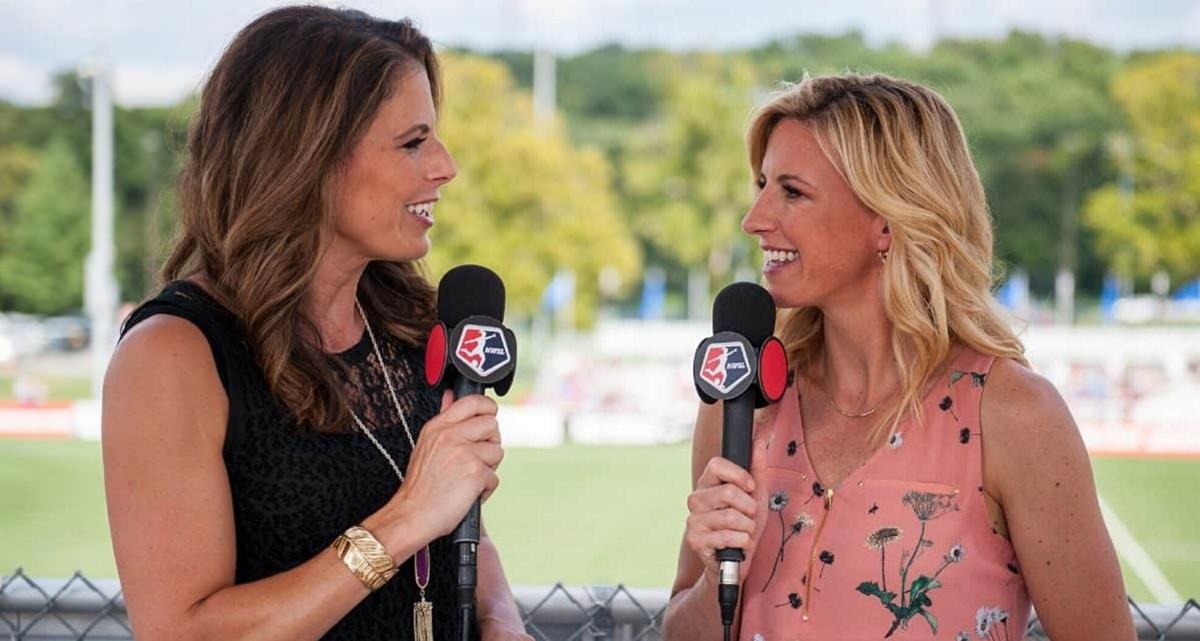 Jenn Hildreth, left, with partner Aly Wagner, will cover the NWSL Challenge Cup final Sunday on CBS from a studio in Florida. The championship will take place in Utah. NWSL photo 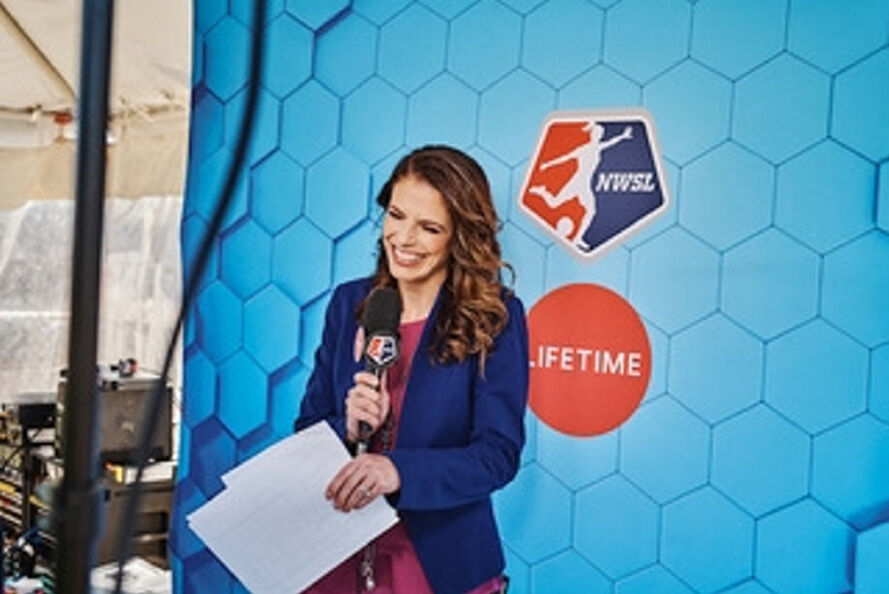 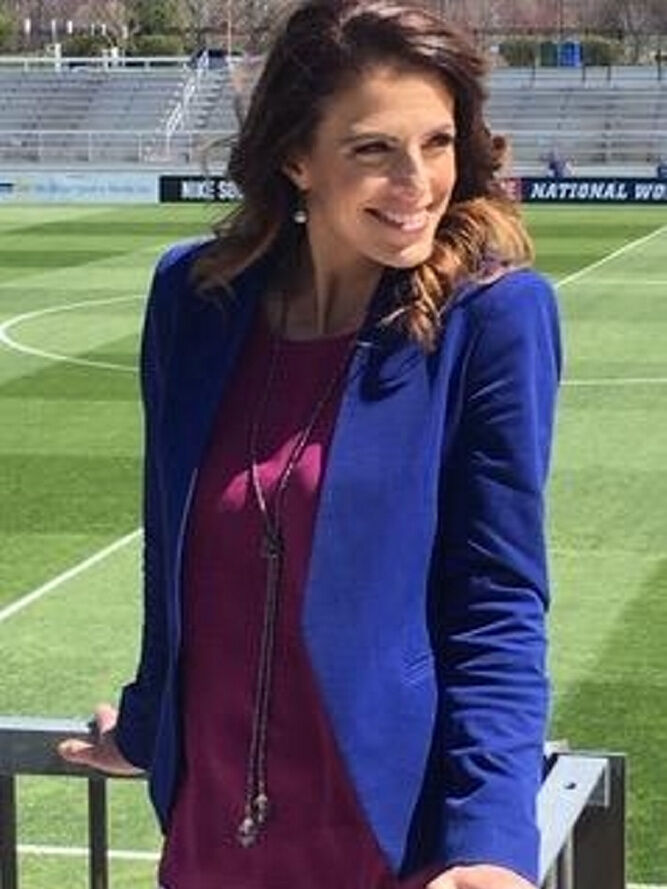 Norwood’s Jenn Hildreth has been the voice of the NWSL for Lifetime, ESPN, Fox and CBS. Photo provided by Jenn Hildreth 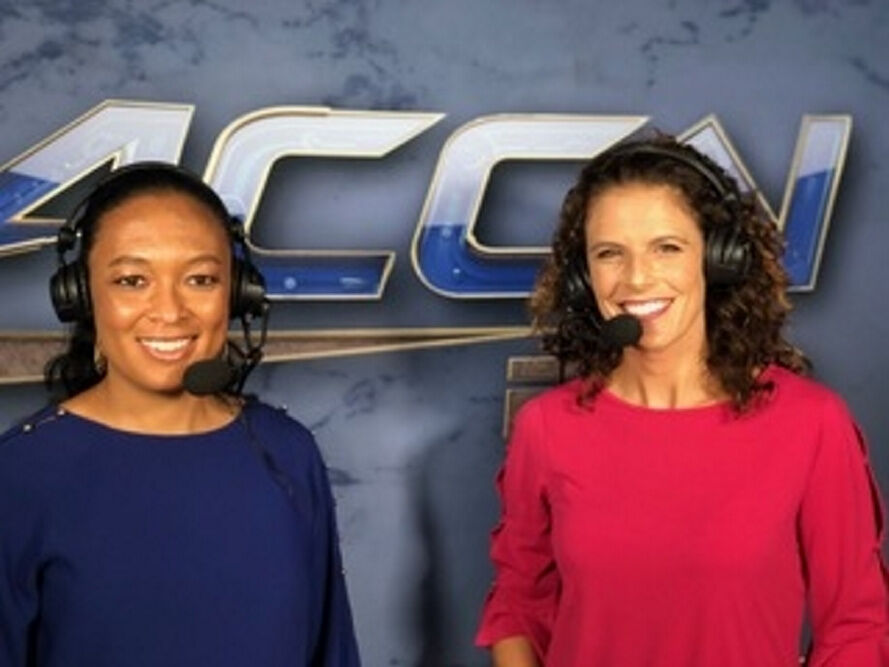 Jenn Hildreth, right, working with partner and former U.S. national soccer team member Angela Hucles, for the ACC Network. Hildreth is a broadcaster, reporter and analyst for the ACC in a variety of sports, including soccer, basketball, softball and gymnastics. Photo provided by Jenn Hildreth 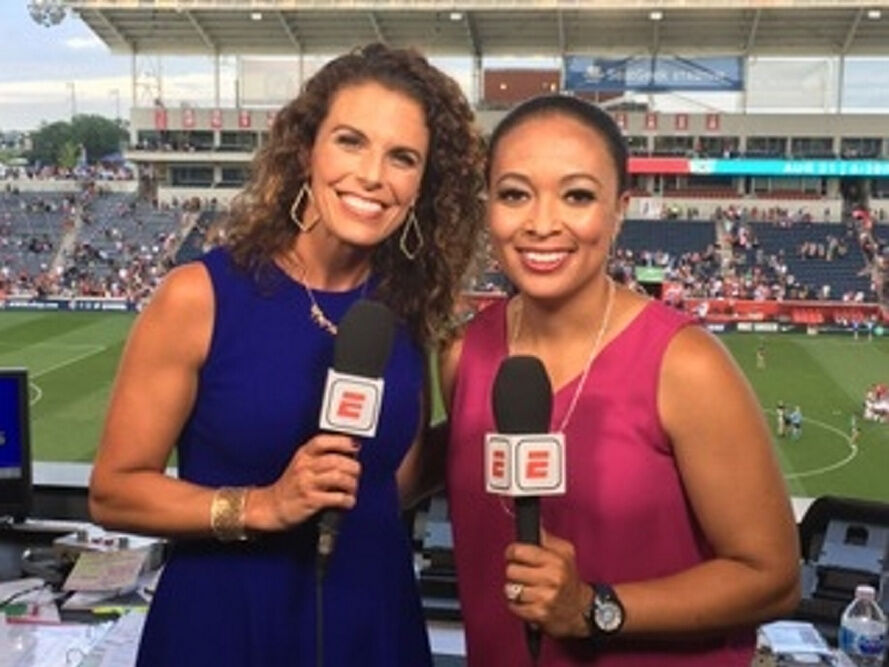 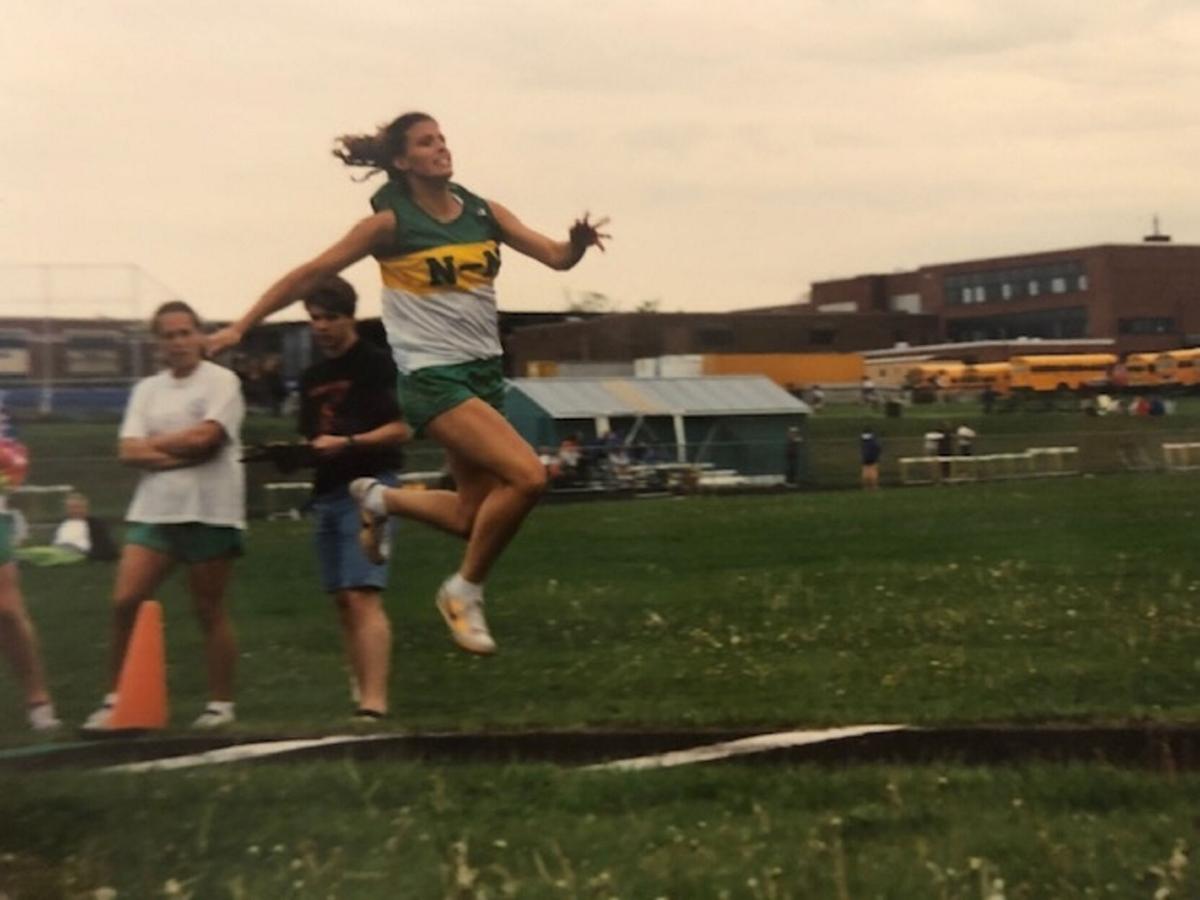 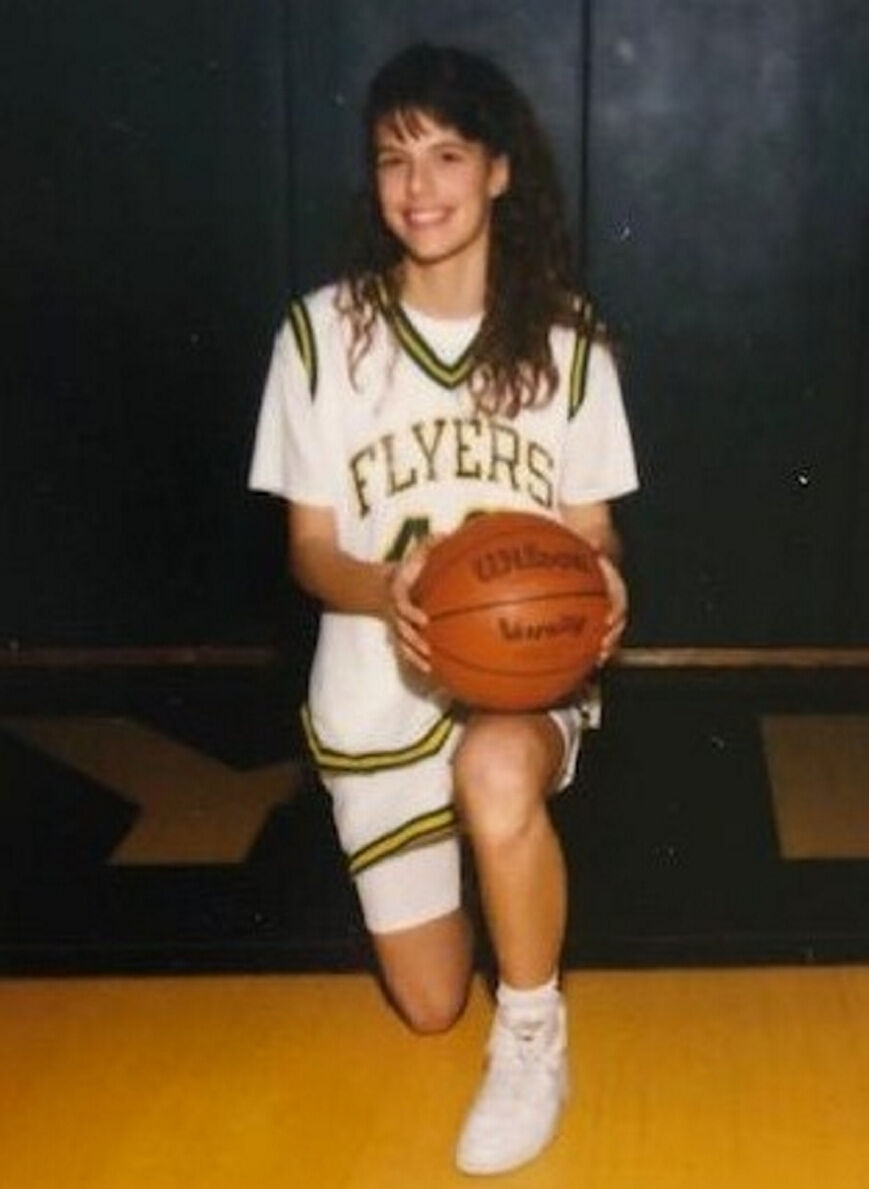 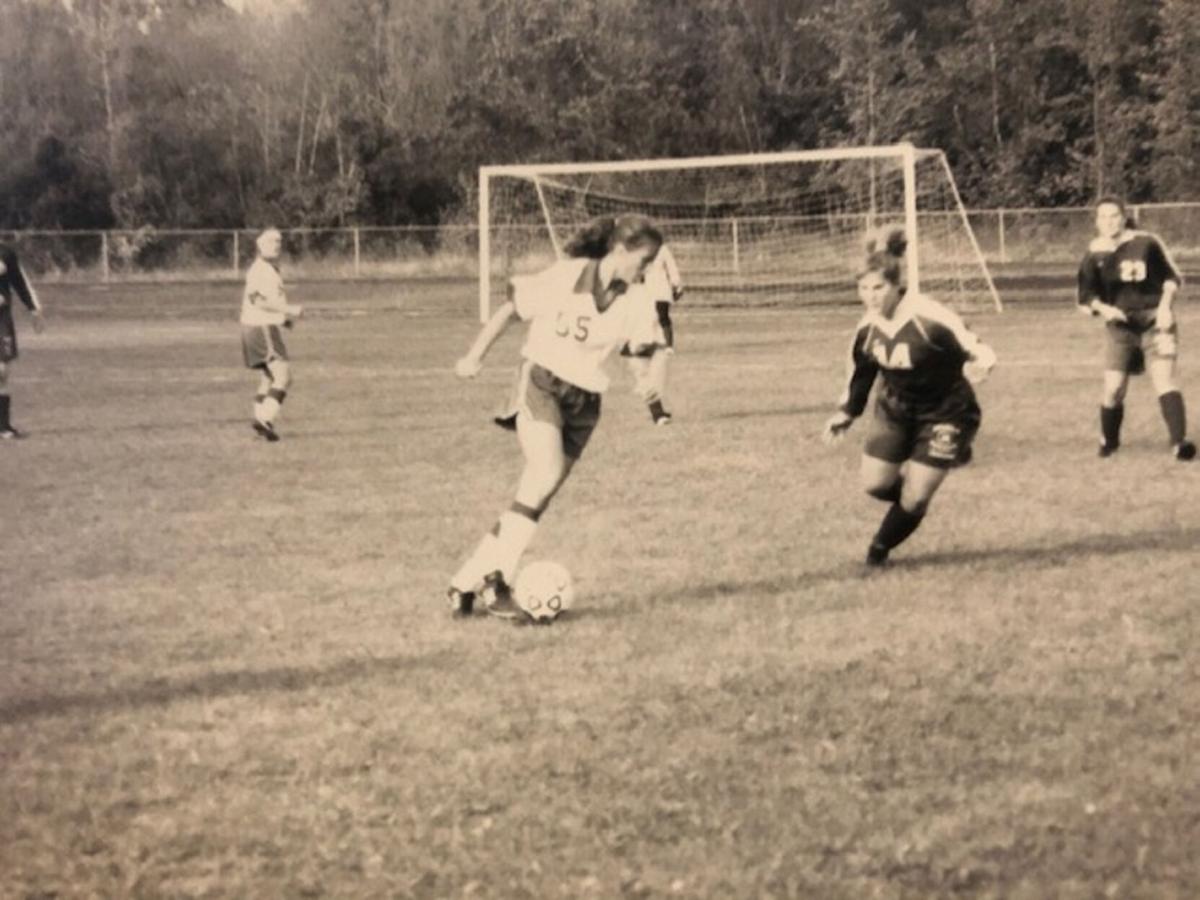 Jenn Hildreth played for the Norwood-Norfolk soccer team both as a forward and goalie. She also played goalie for the Emory College soccer team. Photo provided by Jenn Hildreth 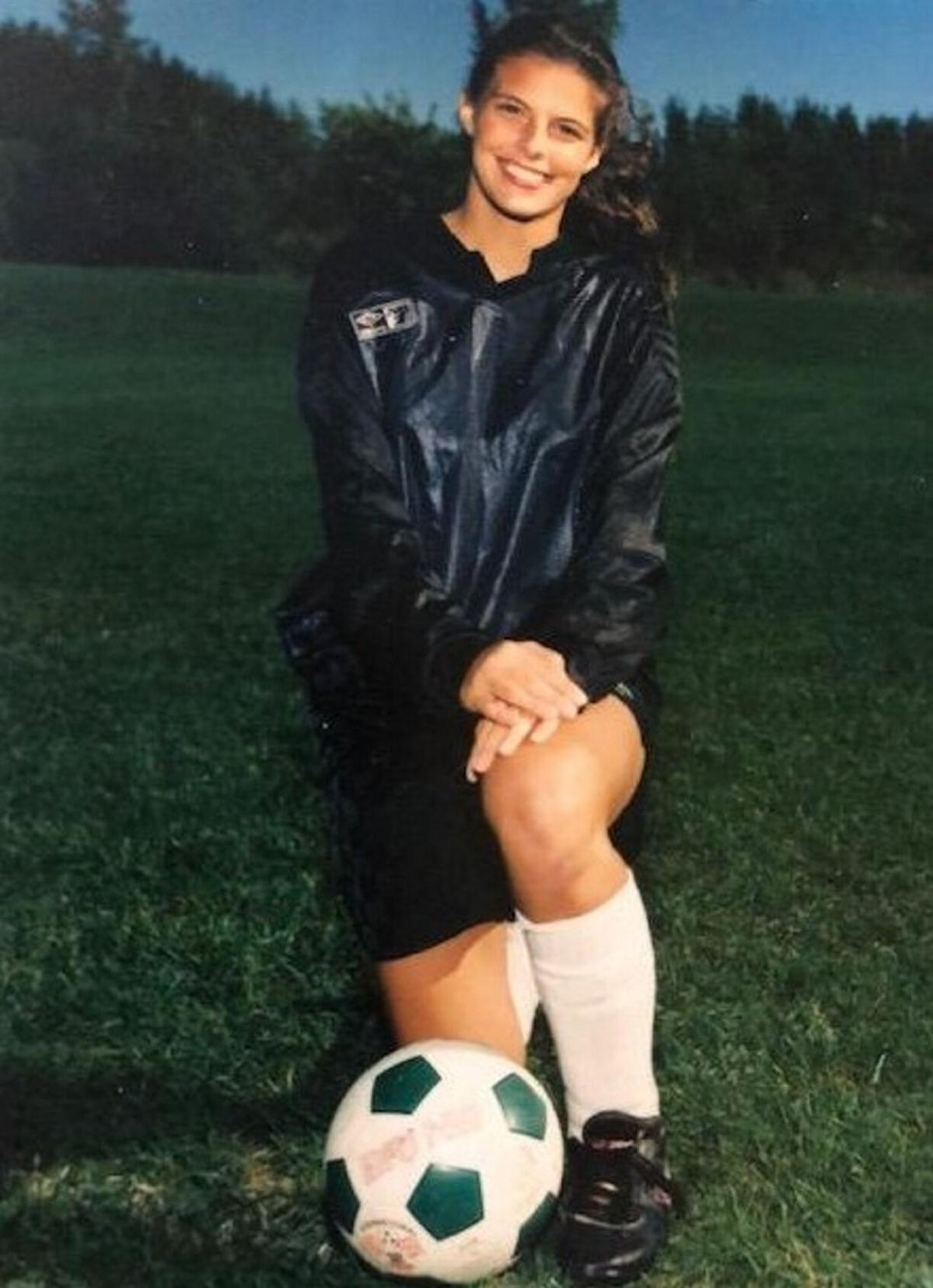 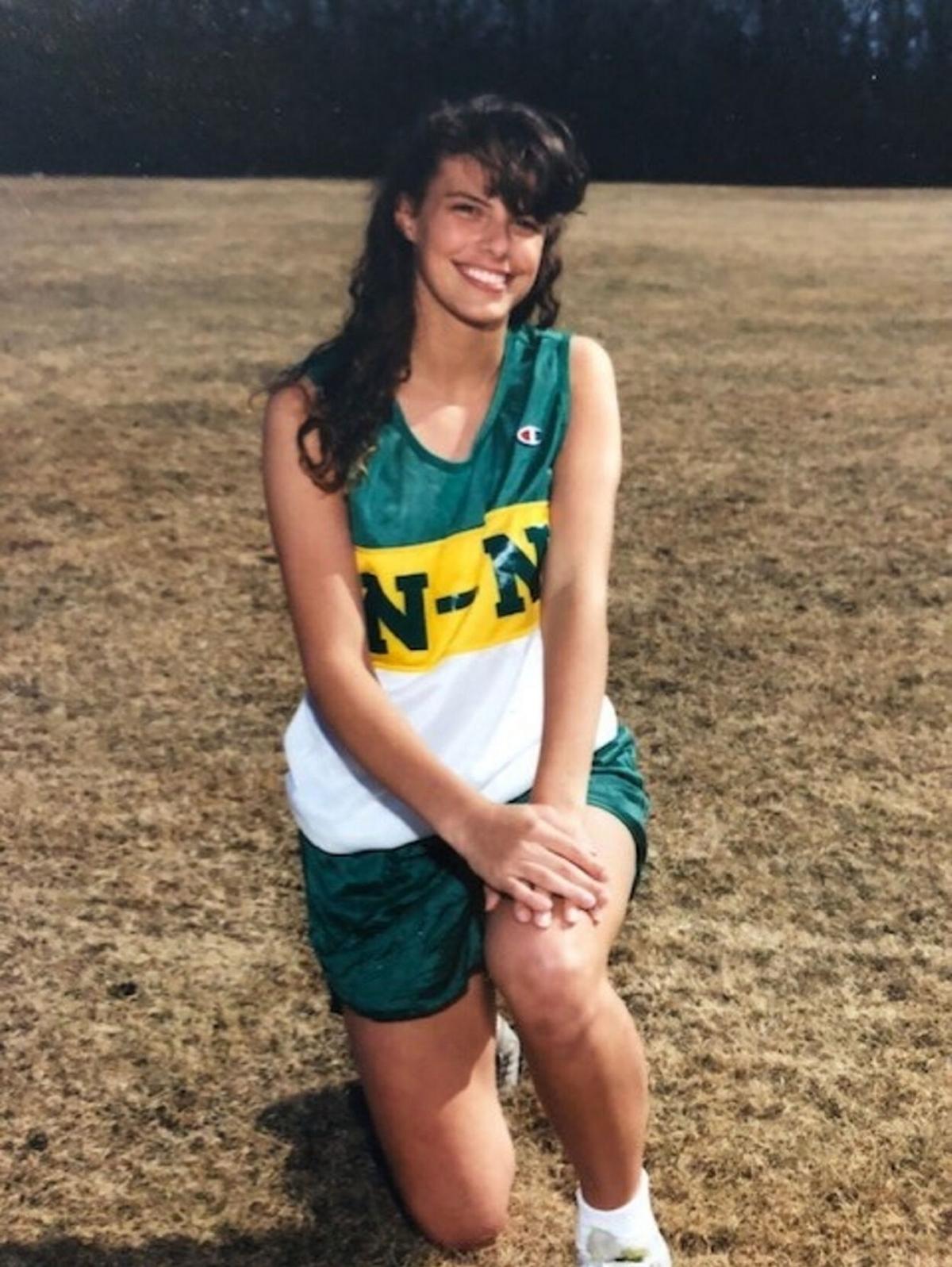 Jenn Hildreth, left, with partner Aly Wagner, will cover the NWSL Challenge Cup final Sunday on CBS from a studio in Florida. The championship will take place in Utah. NWSL photo

Norwood’s Jenn Hildreth has been the voice of the NWSL for Lifetime, ESPN, Fox and CBS. Photo provided by Jenn Hildreth

Jenn Hildreth, right, working with partner and former U.S. national soccer team member Angela Hucles, for the ACC Network. Hildreth is a broadcaster, reporter and analyst for the ACC in a variety of sports, including soccer, basketball, softball and gymnastics. Photo provided by Jenn Hildreth

Jenn Hildreth played for the Norwood-Norfolk soccer team both as a forward and goalie. She also played goalie for the Emory College soccer team. Photo provided by Jenn Hildreth

Norwood native Jenn Hildreth spent the middle of March as confused as anyone in the sports world, as tournaments, leagues and organizations closed down due to the deadly coronavirus pandemic.

But in the past month, and this weekend, Hildreth is at the forefront of leading the sports world back into some semblance of normalcy as games start up again in several professional leagues.

Hildreth, the voice of the National Women’s Soccer League for various networks, broadcast the first team sports event to take place since March’s mass cancellations, when she worked play-by-play for the qualification round game between the North Carolina Courage and Portland Thorns on June 27 to begin the NWSL’s Challenge Cup, which is being held without fans at Zions Bank Stadium in Herriman, Utah.

The game aired live on CBS and was the first opportunity for television viewers to watch a live pro sports event between teams in more than three months.

“There was pressure,” said Hildreth, a 1995 graduate of Norwood-Norfolk who has worked in sports broadcasting for several networks for 20 years. “There was a huge lens focusing on that moment, on that game, and how much we wanted to make an impression.”

Hildreth returns to the national TV screen this weekend for the championship game of the Challenge Cup, calling the game with broadcast partner Lori Lindsey. The final, between the Houston Dash and Chicago Red Stars, is slated to air at 12:30 p.m. Sunday on CBS.

Due to COVID-19 restrictions, Hildreth will call the championship from a studio in Florida rather than on-site at the stadium, just as she did on June 27. She has adjusted to a series of modifications as she gets back to work.

“At first (returning) was very surreal, from the second I set foot in an airplane, something that I had done on a regular basis but something that I had not done in three months,” Hildreth said. “Things that were normal had become abnormal. Calling it from a studio has been a challenge, but it happens more often than one might think.”

Hildreth has broadcast the past two FIFA Women’s World Cups, including last year’s tournament for Fox. She has worked as an announcer, reporter and analyst for the NWSL for the past six years and covers college women’s soccer, working for the ACC Network.

Hildreth said she’s been impressed with the NWSL tournament, considering the uncertainty that hovered over the event at the start.

The NWSL’s Challenge Cup requires that all competitors quarantine for the length of the tournament in the league’s village set-up and submit to regular testing and symptom checks. The tournament began as a 25-game series among the nine teams in the NWSL, but the Orlando Pride dropped out of the tourney five days before its start due to 10 positive COVID-19 tests, including six players.

“The most important thing and foremost in everyone’s mind is about safety,” Hildreth said. “That was a huge concern at the start of the tournament. When we got news at the beginning of (that) week, one of the teams, the Orlando Pride, had to withdraw ... I thought, my gosh, if this tournament makes it to the end, what a success that would be. It seemed improbable.”

Hildreth added that the tournament has served as a blueprint for other sports leagues that are starting up again.

“What it has shown is as difficult as it has been among the players, being in a bubble — and the bubble has taken its toll, and there’s stories like that — the bubble is working,” she said. “ ... I think that is a huge positive, not only for the NWSL, but for every major sport that is starting up, for the NBA and for Major League Baseball. That is No. 1 the biggest thing so far.

“The games have been entertaining and competitive, and in sometimes unusual conditions, some instances where these teams have been playing very grueling schedules, four games in a week.”

The still relatively empty sports calendar has also created an opportunity for pro women’s soccer, which has battled for attention for the last 20 years but now boasts its most resilient league in the NWSL.

“It’s a tremendous opportunity for the league and they know that,” Hildreth said. “(It’s) an opportunity to grab a captive audience when nothing else was really going on. It is a chance to show people what a quality product this is, why fans want to watch, why sponsors want to invest in this. The sponsors who invest in this tournament is what allowed the tournament to take place.”

But she added the league needs more — more teams and more sponsors — to truly succeed.

“I’ve actually broadcast in every iteration of women’s professional (soccer) leagues. ... I’ve seen these leagues come and seen them go, and already have seen more staying power with the NWSL than any other league,” she said. “But it’s a nine-team league and they need more teams in order to grow.”

Ahead of the Challenge Cup semifinals on Wednesday, the NWSL announced the formation of a group planning to bring a franchise to Los Angeles.

Sunday’s game will be just the second game that Hildreth has worked since March. A three-sport high school athlete with the Flyers who also dabbled in other sports, Hildreth is known for her versatility in broadcasting, too. A freelancer for most of her career, she’s worked for ESPN, Fox, Lifetime and Turner Sports. She’s worked play-by-play in basketball, softball and gymnastics and has been a sideline reporter for football, men’s basketball and baseball, including the Atlanta Braves.

But when Hildreth received word in March the day before she was headed to Louisville to cover an ACC softball game that Boston College would not travel due to the COVID outbreak, her hectic pace came to a dead halt.

“The last game I worked (before June 27) was the (Atlantic 10) women’s basketball championship,” she said. “I would’ve been part of the NCAA women’s basketball coverage. Since that basketball game, I’ve worked one event. It has been a huge shift. Never since I’ve been working have I had this amount time off, this amount of time at home ... (You) always look to find a balance and it’s a challenge to balance work and home. I know when it starts to get too much on the work end, but little did we know. I certainly have gotten to have some wonderful time with my family, not to say we haven’t all gone stir crazy sometimes.”

Hildreth, her husband Chris, and her daughters, 13-year-old Ashley and 9-year-old Madison, live in Atlanta. Hildreth said they’ve all made adjustments as a family, much like any other during the pandemic.

“We’re dealing with the hand that we’re dealt,” she said. “At the moment I’m preparing a room in my house for the kids to prepare for virtual school. It’s not ideal, it’s not what anybody would want. But I try to think of some business (that’s struggling) or some person and the big moment that they missed in their life.”

Hildreth, who began her journalism career after graduating from Emory University by working for the Atlanta Journal-Constitution, is also grateful for her north country background where she first established her versatility on Section 10 playing fields. Hildreth’s father, Joseph, is a retired longtime art professor at SUNY Potsdam and her mother, Sandra, works as an artist in Saranac Lake.

“I feel so fortunate to have grown up where I grew up,” she said. “I had the chance to get to play whatever sports that I wanted. I really didn’t start most of my sports. I didn’t get into any of those sports until junior high. ... It’s amazing how early kids now have to specialize. I’m so grateful I had a chance to be versatile then.”