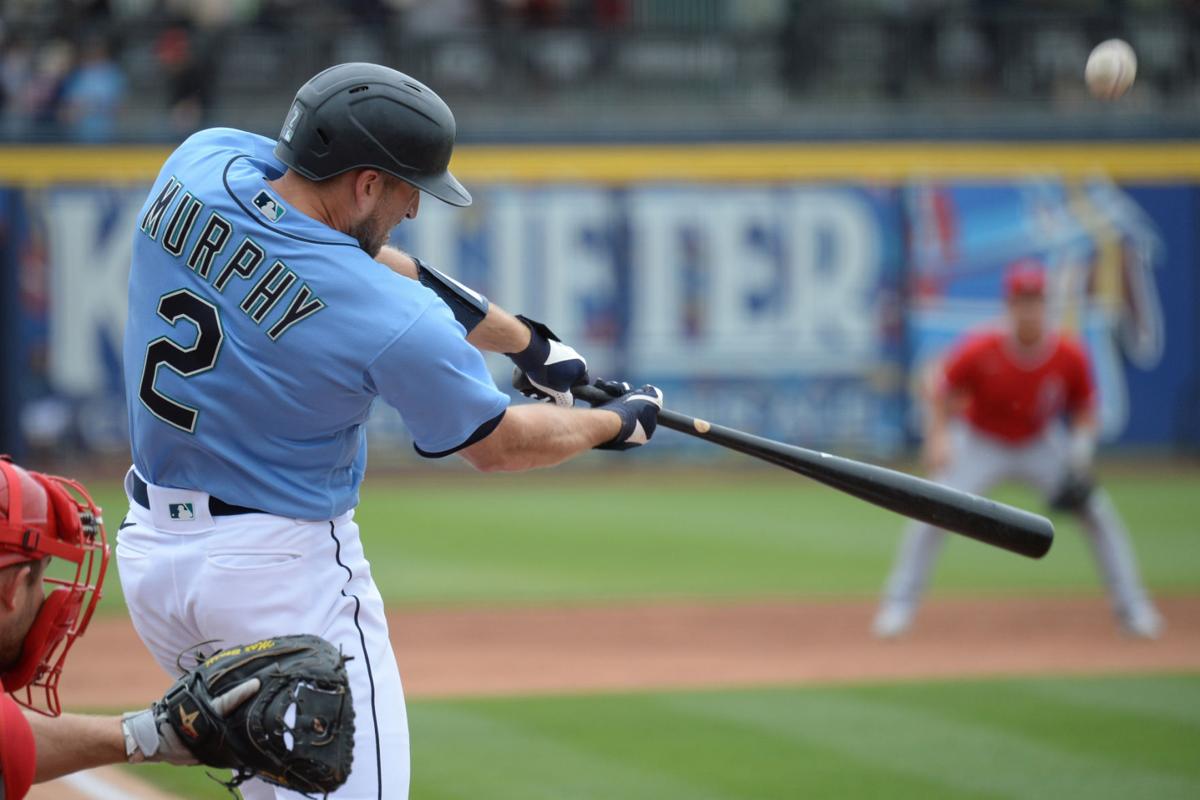 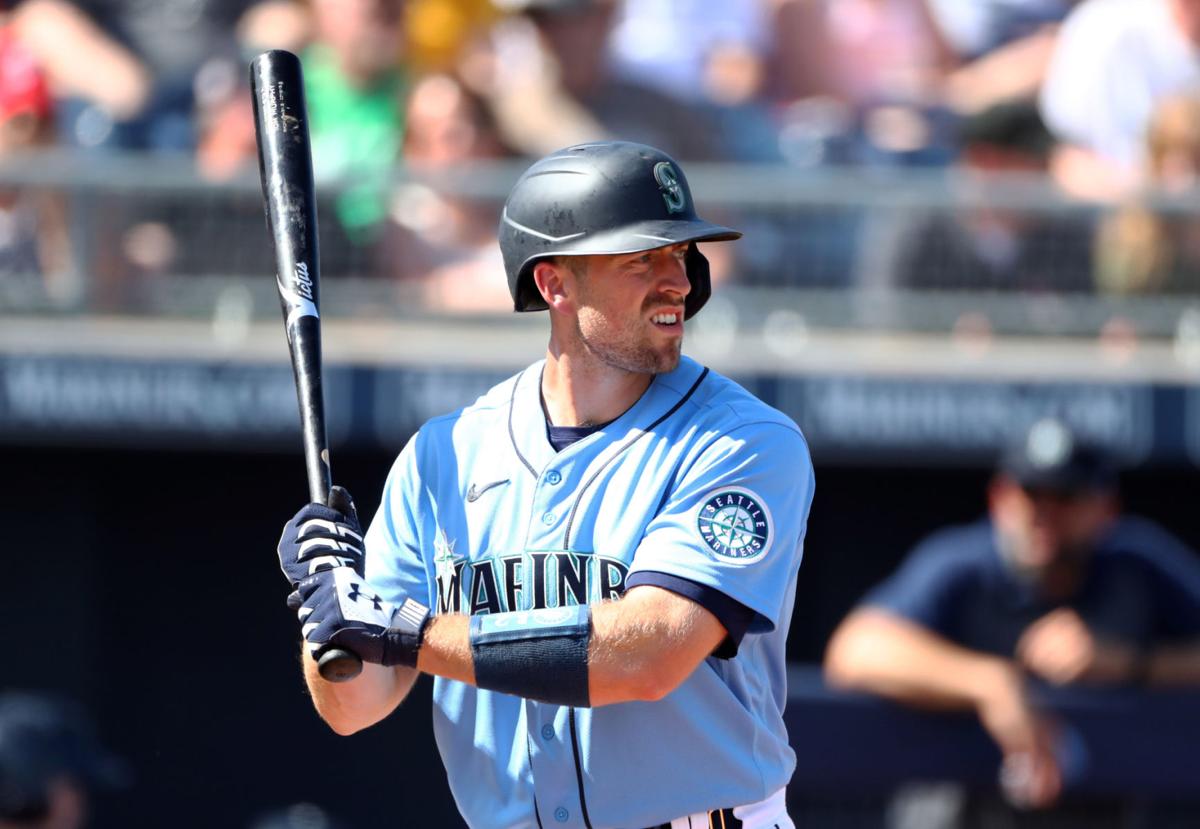 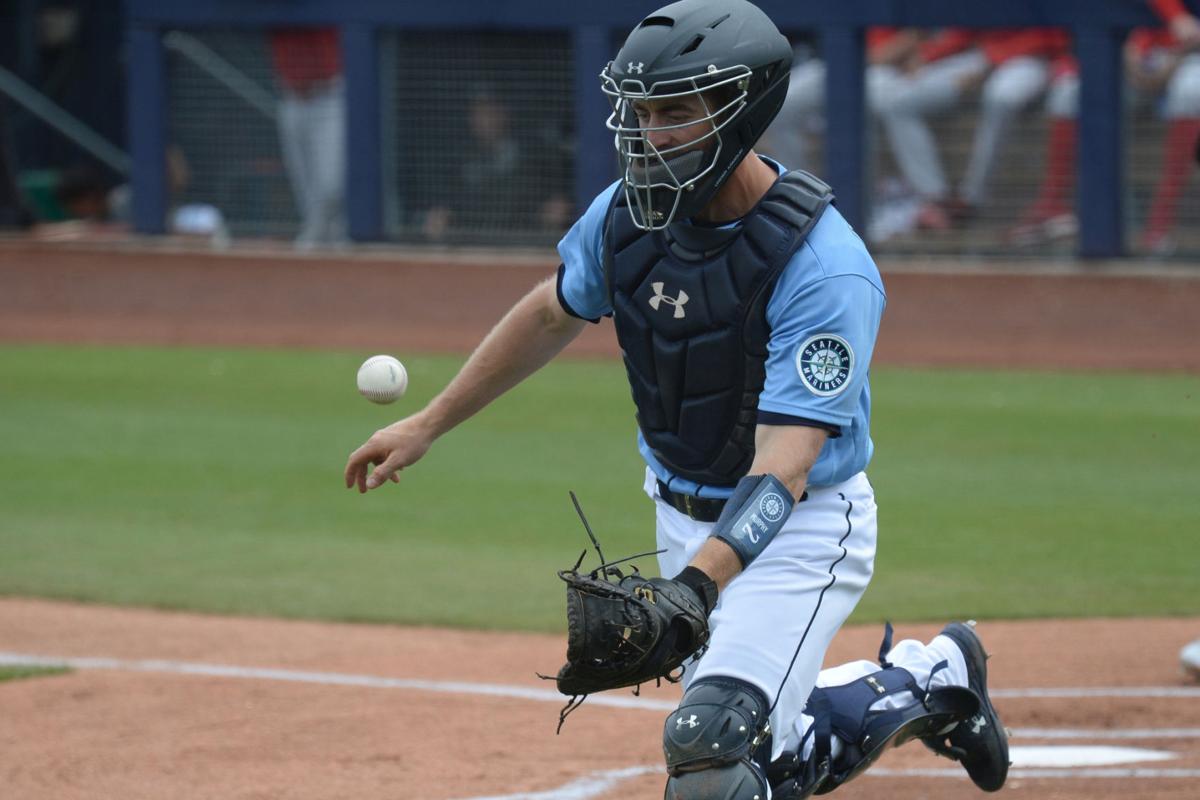 Seattle Mariners catcher Tom Murphy tries to catch a pop up against the Angels during the first inning of a spring training game March 10 at Peoria Stadium in Peoria, Ariz. Joe Camporeale/USA TODAY Sports 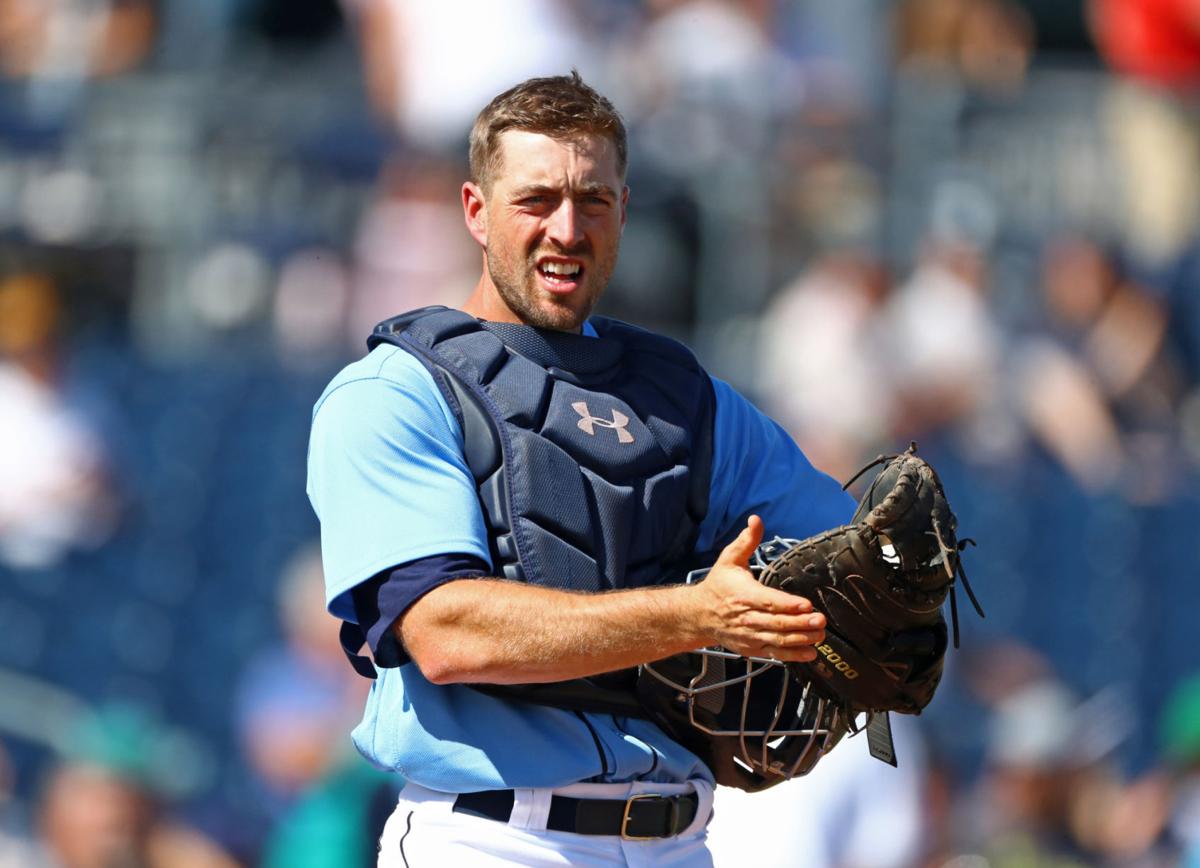 Mariners catcher Tom Murphy has returned to his home in Oswego County while the MLB season is postponed. Mark J. Rebilas/USA TODAY Sports 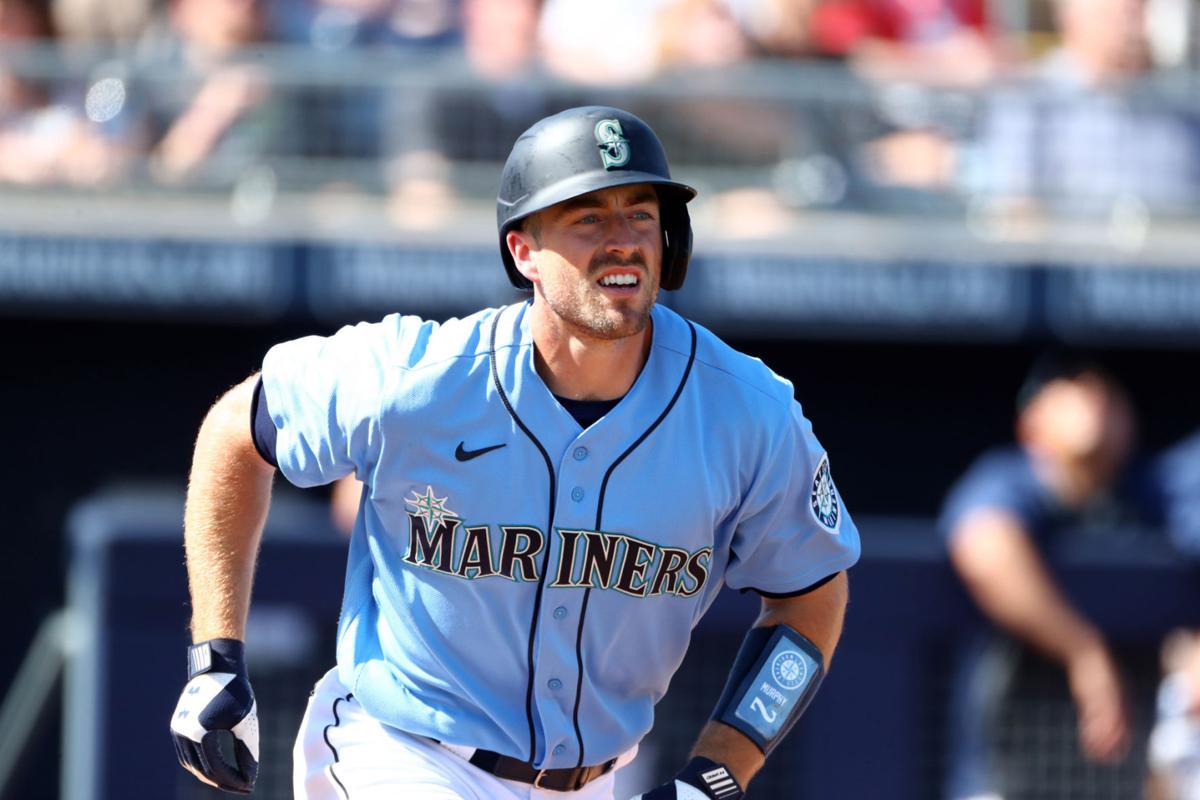 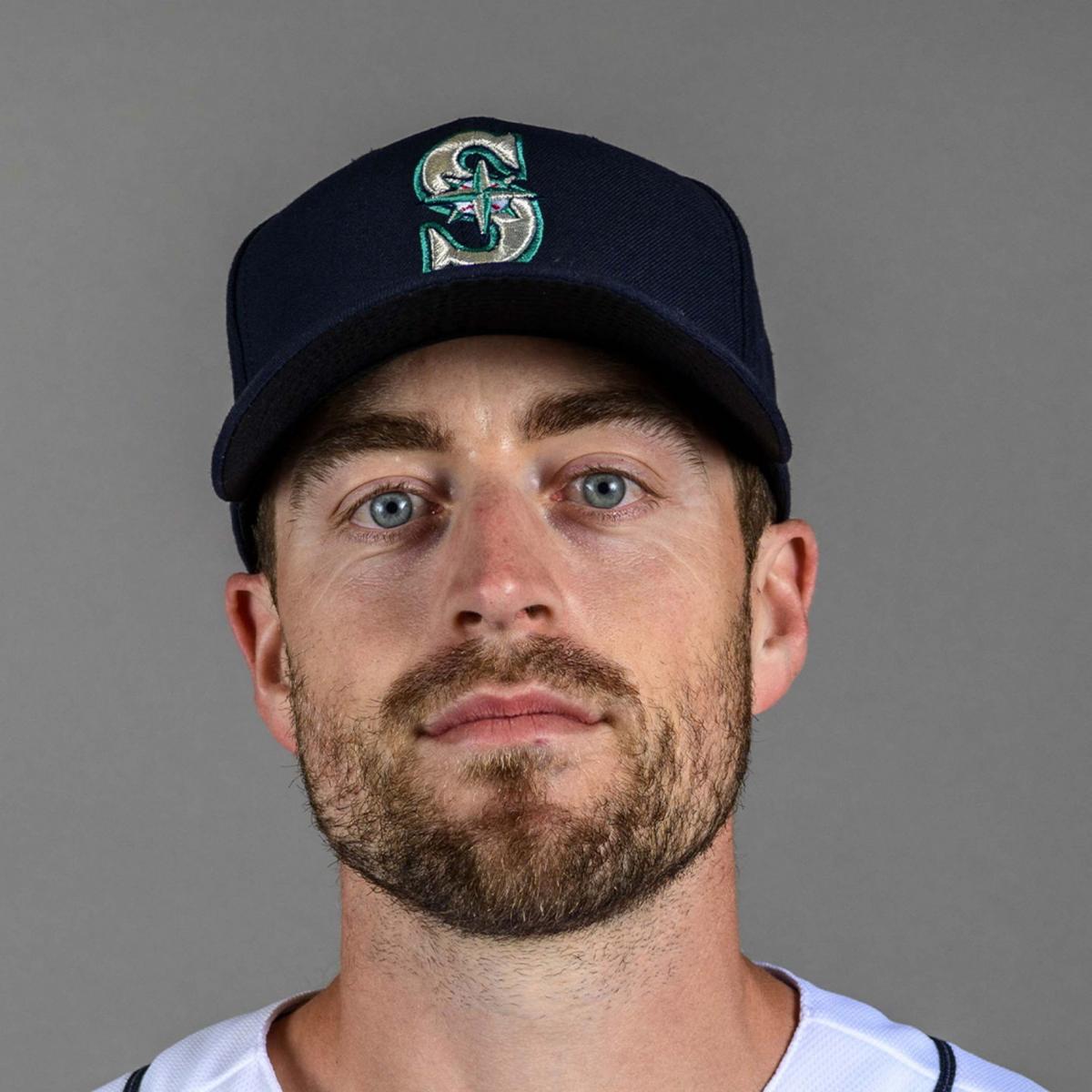 Seattle Mariners catcher Tom Murphy tries to catch a pop up against the Angels during the first inning of a spring training game March 10 at Peoria Stadium in Peoria, Ariz. Joe Camporeale/USA TODAY Sports

Mariners catcher Tom Murphy has returned to his home in Oswego County while the MLB season is postponed. Mark J. Rebilas/USA TODAY Sports

Tom Murphy and his Seattle Mariners teammates were about to load the bus for a spring training game last month when an abrupt meeting was called in the clubhouse to announce that the Major League Baseball exhibition schedule was suspended.

After two of the most confusing days in his professional career, the 2009 Central Square-Paul V. Moore High School graduate eventually found himself driving a rental car from Mariners spring headquarters in Peoria, Ariz., to rejoin his wife and kids at their offseason home in Constantia.

Murphy, who expected to be several weeks into his first full-time starting opportunity as a big-league catcher at this point, remains in Oswego County trying his best to prepare for his long-awaited opportunity that is now being delayed by COVID-19.

MLB has yet to announce if or when the 2020 season will begin or what form it may take if games are eventually played. The league canceled the remainder of its spring training schedule on March 12 due to the pandemic.

“I’m personally very nervous,” Murphy said of the upcoming campaign. “I’m a person that does not ever like to feel unprepared, and right now that’s what I feel like when it comes to baseball skill work. It takes me a ton of reps to get ready for a season and to feel comfortable, and right now that’s just not possible and that’s the case for many guys. There aren’t too many guys that can just pick up a bat and perform like a Major League Baseball player, so it’s a very uneasy feeling right now for sure.”

Murphy — a West Monroe native and the son of Tom and Kelly Murphy — posted career highs across the board last year during his first full MLB season. He started 76 games and hit 18 home runs while batting for a .273 average to go with an OPS of .859.

Murphy finished ninth among MLB catchers in homers last season and his role is expected to expand following the offseason trade of former starter Omar Narvaez. Seattle manager Scott Servais told reporters prior to spring training that he expected Murphy to start about 60 percent of the games and backup Austin Nola to handle the rest.

“Tom Murphy last year made more improvement in one season for a major league player than I’ve ever seen,” Servais said during a media session in January. “That’s a credit to him. Murph bought into us.”

Murphy was eager to reward his manager’s faith and was starting to find his stride during the exhibition tune-ups when the sports world came to a halt last month. The 29-year-old right-handed slugger said that players were stunned when general manager Jerry Dipoto, a former Watertown Indians player, gathered them to share the news just as they were scheduled to depart for a stretch of games in the Cactus League.

Some players were planning to stay in Arizona to train amid the uncertainty before all spring training facilities were closed and forced to vacate a few days later.

“We were getting ready to play a baseball game and then all of the sudden, everything just kind of shut down,” Murphy said. “We were literally about to get on the bus and our GM called a meeting in the clubhouse to tell us what was going on, and in the next few days we were all trying to figure out what we were going to do.”

Murphy added: “Before you know it, I had a rental car and drove all the way back from Arizona to here in upstate New York. I didn’t really want to fly, didn’t really trust the airlines at that time, and since I’ve been home, it’s felt a lot like an offseason.”

Murphy is spending his first spring in the area since his senior year of high school when he played for the Central Square Redhawks and said that he has spent much of his time trying to enjoy the outdoor surroundings.

Murphy likes to hunt and fish during the offseason and said that he has been exploring the woods on his property and going for walks and hikes with family members while maintaining social distance guidelines.

Murphy has a home gym and has been able to play catch with his family, but he doesn’t have a batting cage and lacks much of the equipment necessary to keep his swing as sharp as he’d like during his time away from the club.

“As it relates to baseball activity, I’ve been pretty limited,” Murphy said. “I’ve been playing catch a little bit, I don’t really have access to a cage to hit or anything like that, so it’s just been going through a lot of visualization and doing everything I can to feel like I’m still swinging the bat.”

The Mariners have stayed in constant contact, discussing baseball and the upcoming season, and recently starting a voluntary book club. The first reading assignment was “Chop Wood Carry Water: How to Fall in Love with the Process of Becoming Great,” by Joshua Medcalf.

Murphy had already read the publication but called it a good refresher and said that he was excited to discuss it with teammates during the past week.

The team’s batters have also talked about forming regular meetings where they can dissect approaches and break down film of specific at-bats with former Mariners icons like Ichiro or Edgar Martinez.

“That’s something the Mariners really pride themselves on, there is good communication up and down the ranks,” Murphy said. “Every day, you’re getting a text message from somebody from the training staff, one of your coaches. We’re doing everything we can as an organization and thankfully I’m a part of it.”

MLB commissioner Rob Manfred and the players union have yet to formally propose outlines for a potential season though various ideas and hypothetical scenarios have been floated through the media in recent weeks. One of the more extreme suggestions called for a season to be played in a central location where players would be quarantined for its duration and regularly monitored and tested.

Other models and the potential for a canceled season have also been rumored, but Murphy said that he and other players are continuing to play the waiting game and staying prepared to play while hoping for more concrete information and updates in the coming weeks.

“It just comes down to, we don’t know, and that goes for the league and the players,” Murphy said. “There is so much uncertainty in the world right now that no one can make a firm decision, it’s all just speculation. ... Everybody is itching to get back to normal life and us as baseball players want that as much as anyone else, but health and safety is No. 1 and that’s always on the forefront of our minds.”