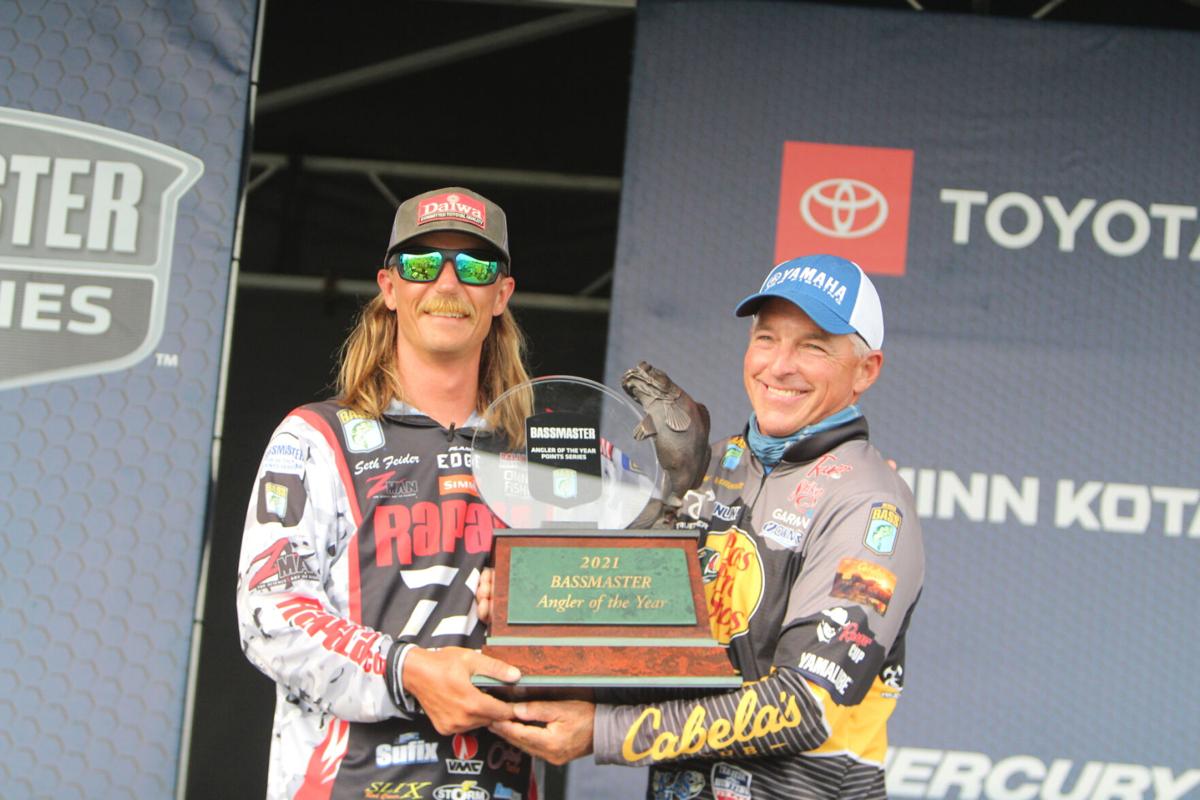 Last season’s Bassmaster Elite Angler of the Year Clark Wendlandt, right, presents the 2021 trophy to Seth Feider on Friday at the Bassmaster Elite Tournament on the St. Lawrence River in Waddington on Friday. Dave Shea/The Journal 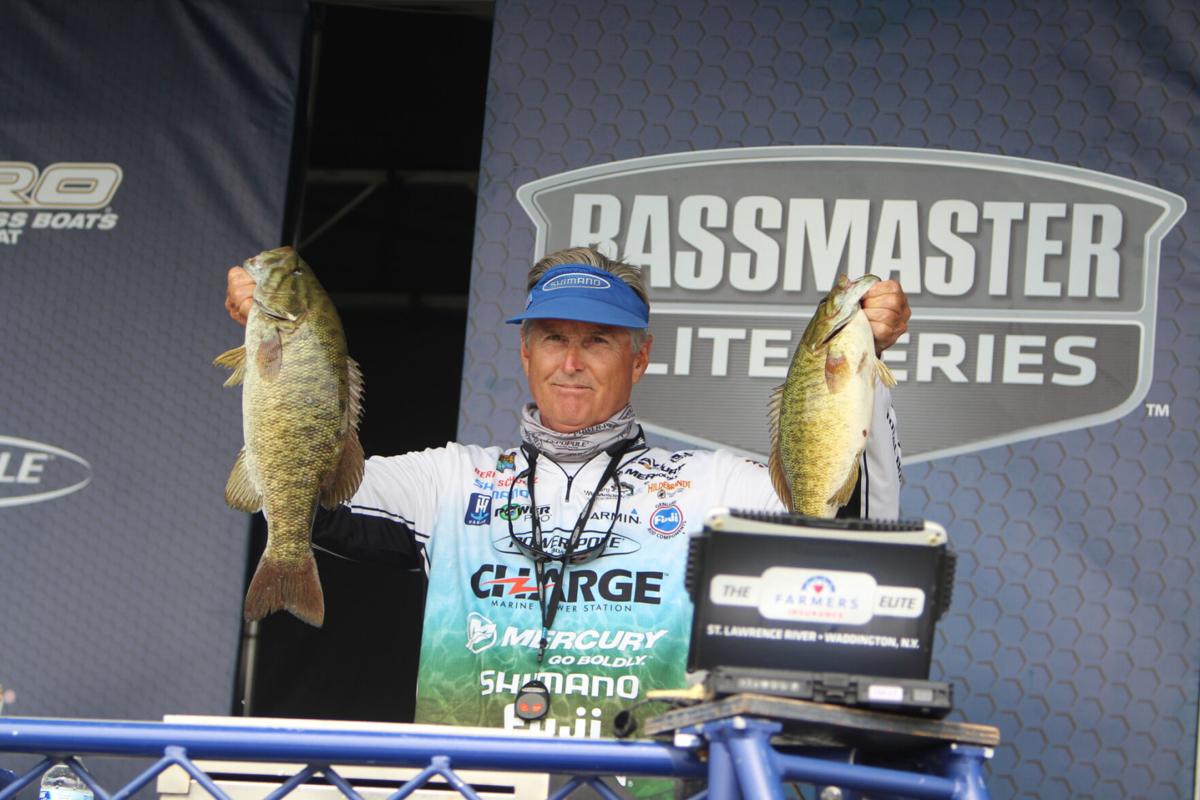 Bernie Schultz holds up two bass from his bag that kept him in first place at the Bassmaster Elite Tournament at Waddington Friday. Dave Shea/The Journal 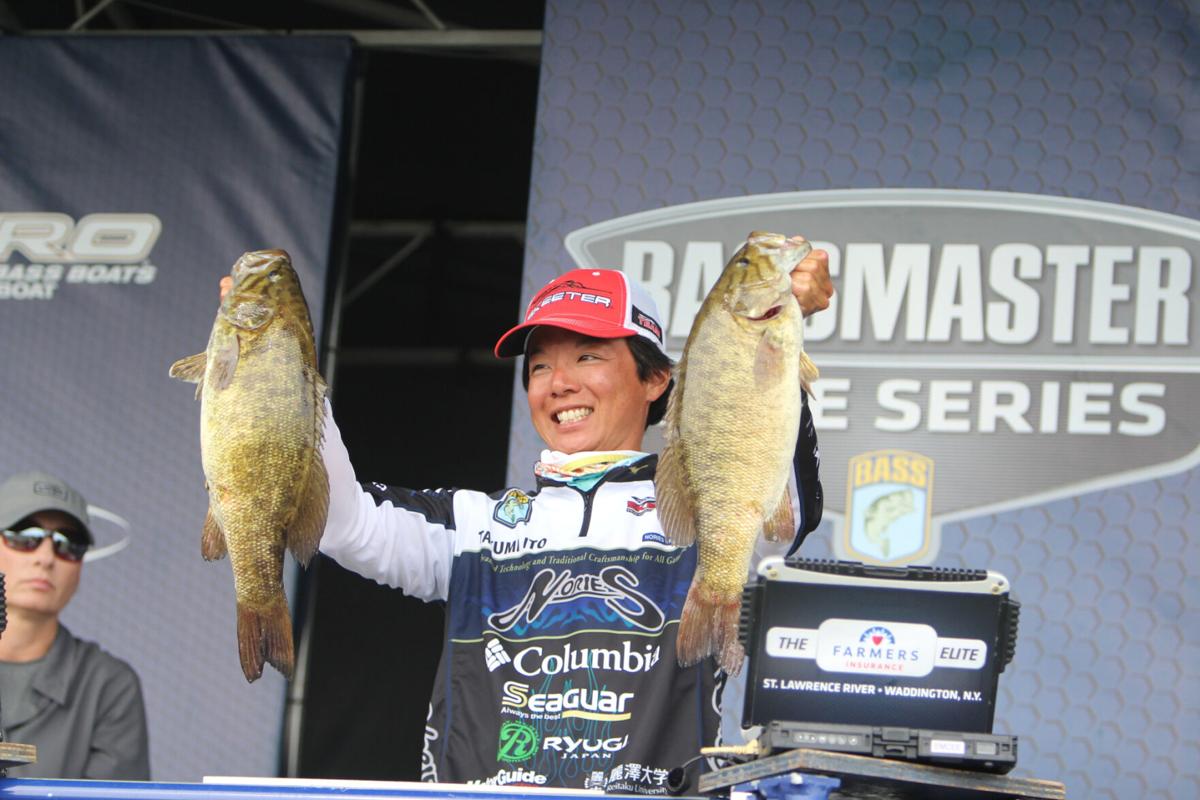 Taku Ito of Japan holds up two huge bass from his bag Friday in Waddington in the Bassmaster Elite Tournament on the St. Lawrence River. Dave Shea/The Journal 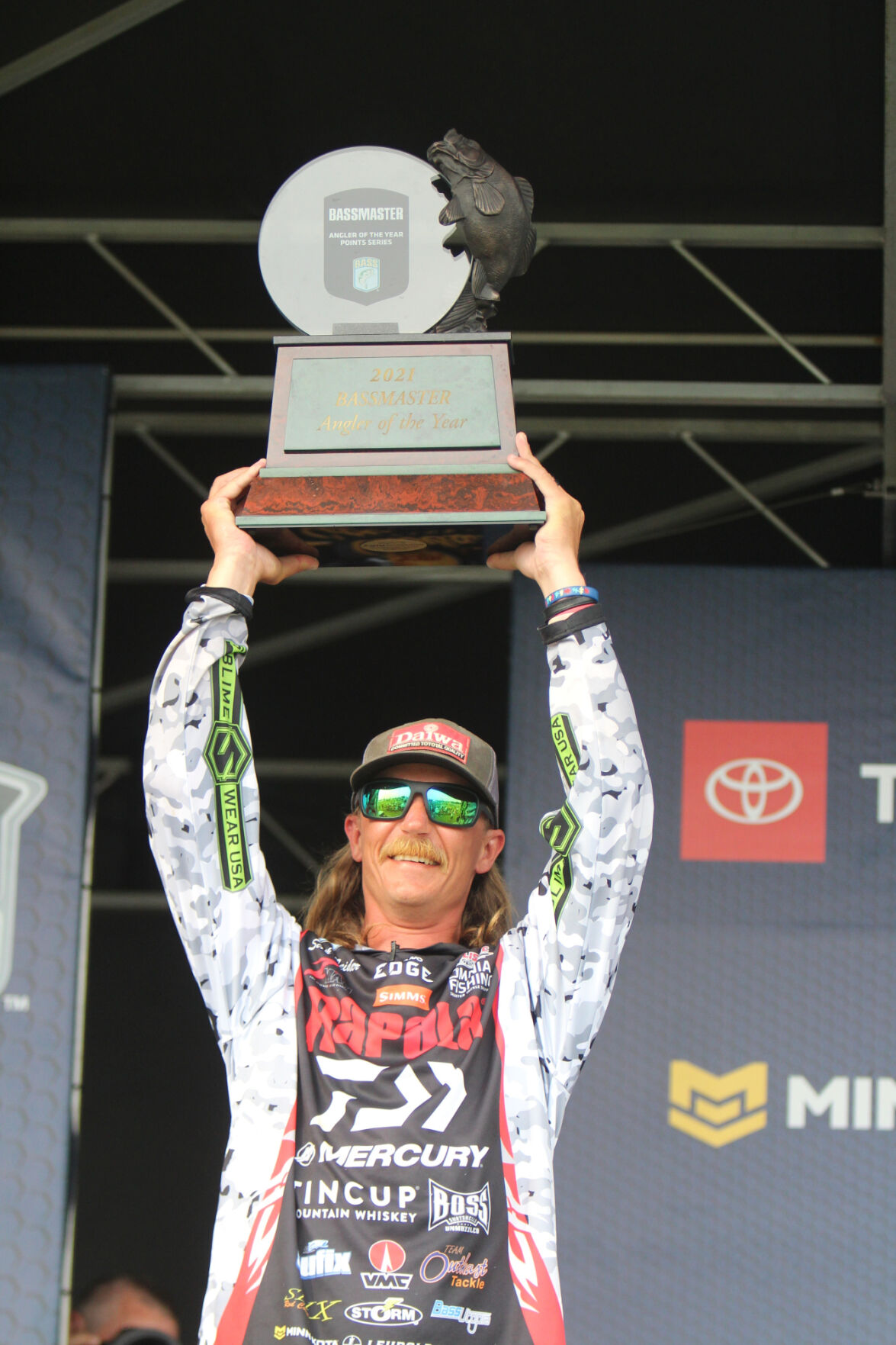 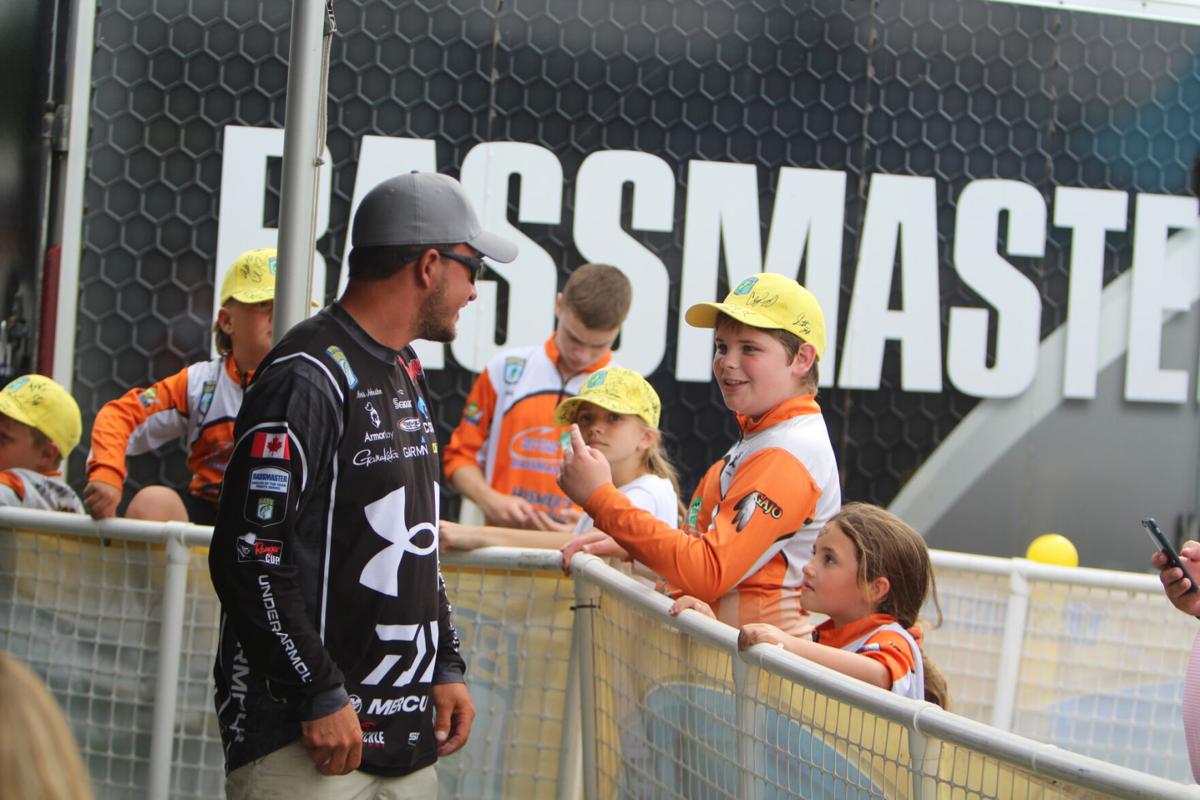 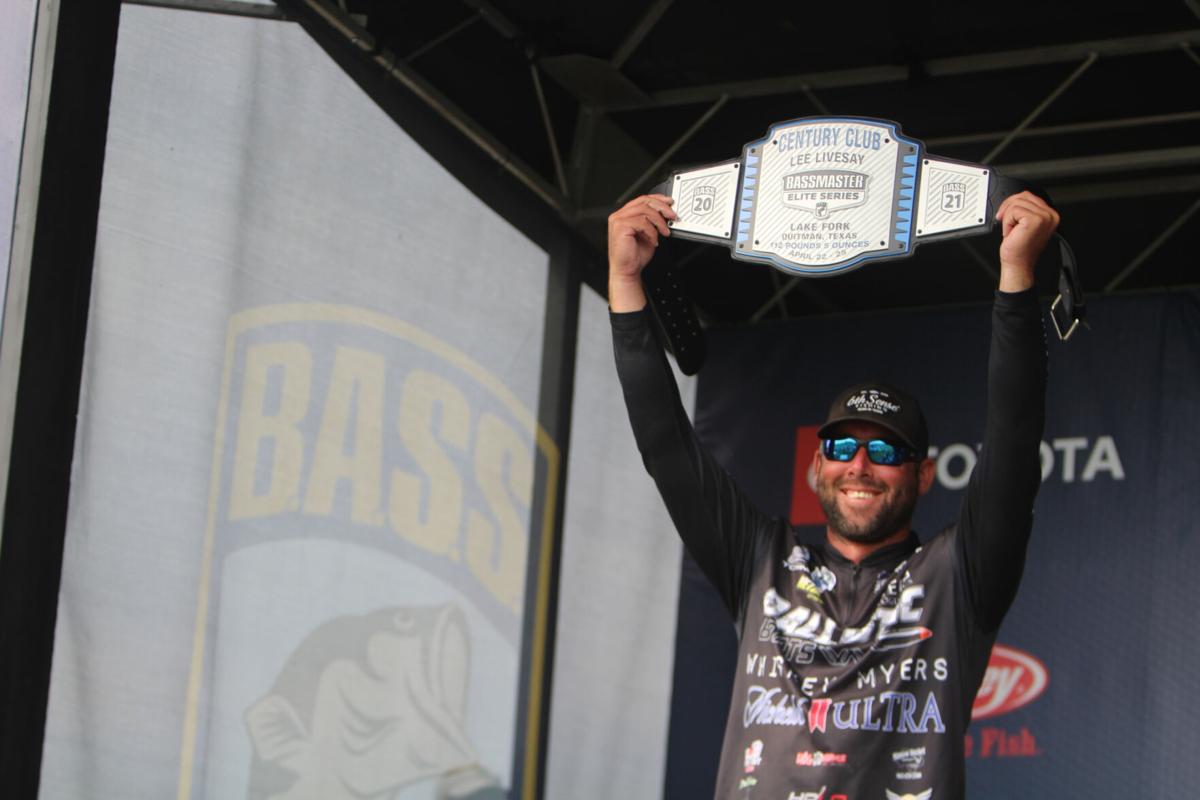 Last season’s Bassmaster Elite Angler of the Year Clark Wendlandt, right, presents the 2021 trophy to Seth Feider on Friday at the Bassmaster Elite Tournament on the St. Lawrence River in Waddington on Friday. Dave Shea/The Journal

Bernie Schultz holds up two bass from his bag that kept him in first place at the Bassmaster Elite Tournament at Waddington Friday. Dave Shea/The Journal

Taku Ito of Japan holds up two huge bass from his bag Friday in Waddington in the Bassmaster Elite Tournament on the St. Lawrence River. Dave Shea/The Journal

On Friday, Feider weighed in 20 pounds, 3 ounces of bass to place eighth among the 45 anglers who made the second-day cut, earning enough points (790) to secure the Bassmaster Elite Series Angler of Year Award.

Today, the field will be cut to 10 for championship Sunday, which climaxes with a 3 p.m. weigh-in at Whittaker Park.

“I feel like the weight of the world has been lifted on my shoulders. I put a lot of pressure on myself and I felt a lot of anxiety today. To win this title amazing, it is a real milestone. I have been dreaming about since I was 9 years old or so and every day I went fishing I worked hard toward it,” said the Minnesota angler.

As the AOY points leader, Feider weighed in last Friday creating high drama when so many things were on the line for so many anglers.

The Rookie of the Year race will continue today, the winner of the tournament qualifies for the Bassmaster Classic and several anglers are looking to gain enough points to qualify for the classic.

Bernie Schultz slept on the lead for a second straight day. He weighed in 22-9 of bass Friday following up Thursday’s tournament best 25-5 bag. Entering the tournament in 77th place in the Angler of the Year standings, Schultz (47-14) needs to win to make the classic and he knows it will be difficult. He is being chased by the Ontario brother tandem of Chris (46-5) and Cory Johnston (45-9), who landed 22-14 and 22-0, respectively, on Friday.

“You’ve got to get past the Johnstons ... everybody knows that,” said Schultz of Gainesville, Fla. “Those two know this river better than anybody, and (Lake Ontario) even better. They can’t fish Canadian waters, but my best spots are in Canadian waters, too.”

Schultz said that solitude was a major key to his success in the first two days. He fished a flat area in Chippewa Bay virtually alone.

“I think one other guy was around be didn’t stay long. I was fishing a flat with rocks and gravel surrounded by weeds, which dropped off into a channel. I took me a while but I figured out that I had to fish a little deeper. It looks like a spot that the fish are moving into,” Schultz said.

“I basically used ned rig but I did catch a nice fish on a top water and had another big one blow up my lure but I didn’t get it. I was a little surprised that they were not in shallow water around five feet. I fished a lot in eight to 15 feet and I had some bites on fish that I didn’t see.”

Chris Johnston, the first Canadian angler to win a Bassmaster Elite Tournament and defending champion at Waddington, said he stands in a good position to repeat after a day when 15 anglers worked hard to weigh-in in 20-pound bags.

“The fishing was definitely tougher today and I may have to change some things tomorrow. I didn’t fish the river much today so I might fish it more tomorrow. It just depends on the weather and how much I can move around,” Chris Johnston said.

“But I have a lot of spots and I know there are some big ones I left out there. I just have to go out and get them.”

Brandon Palaniuk, of Idaho, who has been a crowd favorite since the first Bassmaster Elite Tournament at Waddington, stood 11th at 40-3. He was among the many anglers who expressed his love for fishing on the St. Lawrence River, and the support and hospitality of the huge crowds at the weigh-ins.

He also expressed his optimism that he could make a major move toward a possible first-place finish.

Live coverage of the event will begin at 8 this morning on Fox Sports 1.