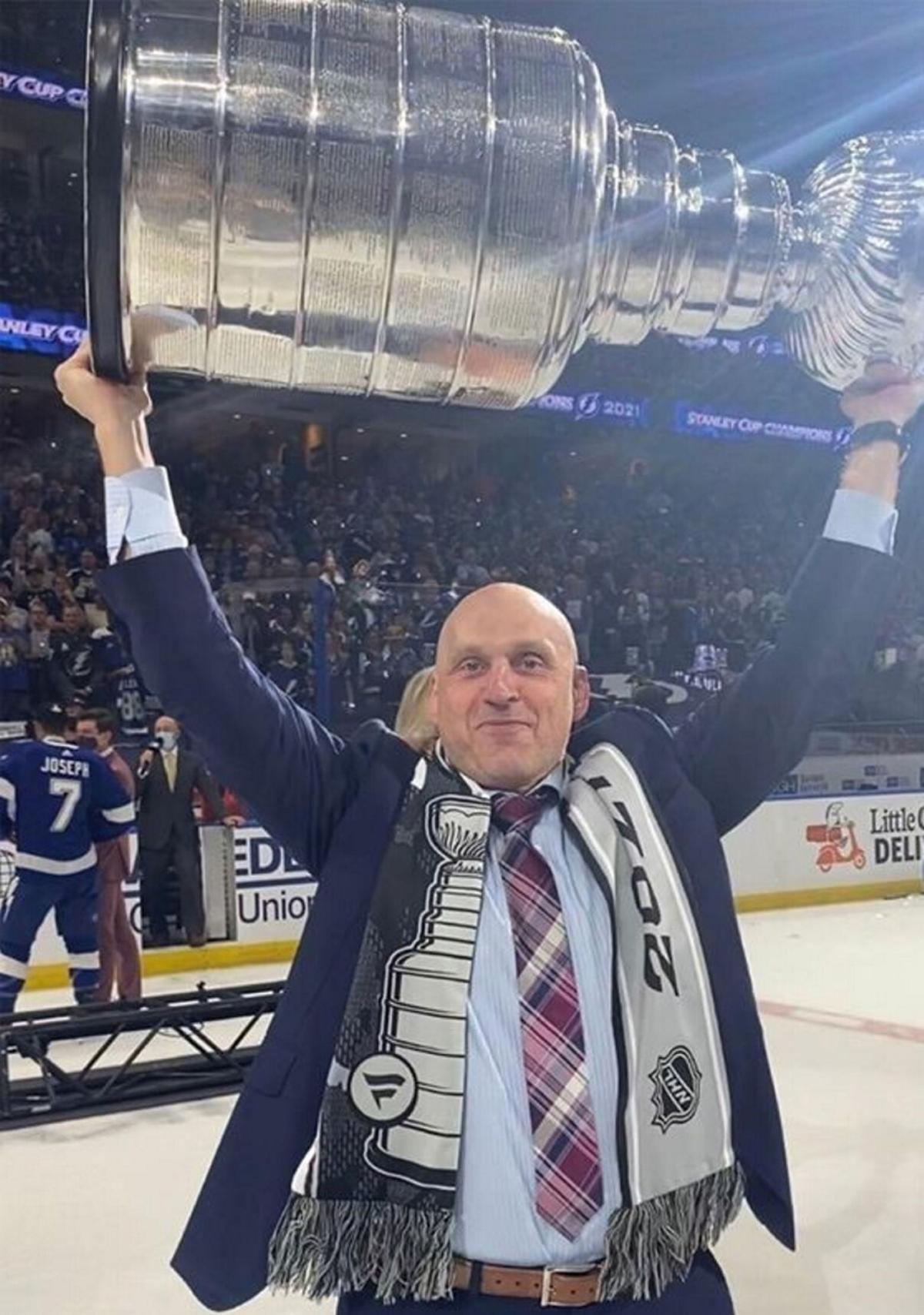 Brasher Falls’ Derek Lalonde hoists the Stanley Cup on July 7 as a member of the Tampa Bay coaching staff. Provided by SUNY Cortland

Brasher Falls’ Derek Lalonde hoists the Stanley Cup on July 7 as a member of the Tampa Bay coaching staff. Provided by SUNY Cortland

The Tampa Bay Lightning became just the fourth NHL team in the past 30 years to win back-to-back Stanley Cup titles last week, and former SUNY Cortland goalie and St. Lawrence Central graduate Derek Lalonde again played a key role in the team’s success as one of the team’s assistant coaches.

Fans watching the Lightning’s championship-clinching 1-0 win over Montreal on NBC this past Wednesday saw Lalonde directing the team’s defensive unit during a timeout after the Canadiens pulled their goalie for an extra skater. Tampa Bay posted shutouts in each of its four playoff series final games, including nail-biting 1-0 wins in the finals, as well as in Game 7 of the semifinals versus the New York Islanders.

Now that members of the Lightning are in the thick of celebrating its third title in franchise history, Lalonde, a native of Brasher Falls, is excited to partake at some point this year in a special NHL tradition. Since the mid-1990s, each member of the winning team gets one day to bring the Stanley Cup wherever they’d like, supervised by at least one representative from the Hockey Hall of Fame.

“Last year’s playoff run was phenomenal in its own way, but we got cheated out of taking the Stanley Cup home,” said Lalonde recalling how the COVID-19 pandemic canceled the tradition for a year. “It’s been a dream of mine to bring it to Brasher Falls, and the fact that it’s going to be a reality is incredible. I can’t wait to bring it home and share it with family, friends and former teammates. The Cup is a true celebrity.”

Lalonde, a 1995 Cortland graduate, is far from an overnight success in the hockey coaching world. He started in the NCAA Division III ranks as a graduate assistant coach at Massachusetts College of Liberal Arts from 1995-98 and then was an assistant coach from 1998-2000 at Lebanon Valley College under his former Cortland head coach, Al MacCormack. He remained in Division III as an assistant at Hamilton College from 2000-02, then held Division I assistant positions at Ferris State University (2002-06) and the University of Denver (2007-11), the latter of which made four straight NCAA tournament appearances during his tenure.

Lalonde values each of the rungs he climbed on the coaching ladder.

“It looks like perseverance, but it never was,” said Lalonde less than 48 hours after winning his second straight Cup. “I love the profession. There’s not a day that goes by that I don’t appreciate doing this for a living. Whatever stop I had, it was never about the next stop. It was always about being great in the job I was in. I got that advice early in my life. I live by it, and I was also blessed with a lot of good hockey teams. It’s not an accident I’ve won everywhere I’ve been at. You have to have good players.

“I always live in the moment, and it’s taken care of itself. Every place I went to was about growth. From being a Division III coach to Division I at Ferris State, which made me better. From Ferris State to Denver, which made me better because now you have to win there. Then to Green Bay in the USHL so I could be a head coach, and we won a championship. At that point I thought I’d be a college head coach — a lot of top-end college guys cut their teeth in the USHL. With the résumé I was building and the success I had, I was very comfortable knowing that I was probably going to get my opportunity at a quality Division I program as a head coach.”

But other pro hockey opportunities changed Lalonde’s plans when the Red Wings called him and offered him the position in Toledo. He basically started from scratch there and won a combined 97 games in two seasons. He followed that by inheriting a last-place team in Iowa and winning 69 games in two years.

Is an NHL head coaching job in Lalonde’s future? He hopes so, but still keeps a firm grip on the “live in the moment” approach to his career. “I want to be good at the job I’m at. I’m blessed to coach in the profession. I never thought I’d actually make money doing it. But the one life-changing job is being an NHL head coach. And if it comes, the beauty is I know I’m going to be ready due to my experiences, and if it doesn’t, I’m going to be great at whatever job I’m at.”

No matter his coaching position or level, Lalonde has kept Cortland close to his heart. He played four seasons with the Red Dragons from 1991-95 and built friendships and memories that have lasted a lifetime.

“I love Cortland to death. I had an unbelievable experience. (My former teammates) are still my best friends. The last two years we’ve had a text exchange with about 30 of my Cortland teammates, not only during my two Cup runs, but also Nate Leaman’s ‘97 World Juniors (head coach of Team USA’s National Junior Team title-winning squad in January).

“For me personally, I had to earn my career there. My first year I was one of five goalies. I barely touched the ice until my sophomore year (he played a total of 30 minutes as a freshman). By the time I was a senior I played in most of the games and my teammates named me the team’s Red Letter Award winner. It was one of my greatest accomplishments. My teammates and my coaches provided experiences that shaped me and have helped me have the success that I’ve had.”

Tampa Bay’s title run also provided Lalonde a chance to celebrate with one of his Cortland classmates. Jim Sarosy (1995) served as a supervisor at Alumni Arena, Cortland’s home rink, during his undergraduate days and is currently the Chief Operating Officer for the Syracuse Crunch. The Crunch has been the Lightning’s AHL affiliate since 2012 and has helped develop many of the players who contributed to Tampa Bay’s current success.

“After we won (last week) it was a circus in the locker room,” Lalonde said. “I’m looking for my family, and one of the first people I see is Jim and we had our whole Cortland moment. Jim is so respected and well-liked in the organization by all the players and coaches. It’s a huge credit to him.”

Lalonde is one of a handful of Red Dragons who have helped lead teams to Stanley Cup titles in recent years. Massena’s Matt Meacham (2008), also a former Cortland goaltender, was a video coach for the Chicago Blackhawks during their win in 2015. Rob Tillotson (2006) was the director of team services for the Washington Capitals when the team won the cup in 2018, while Ray Barile (1986), the longtime head athletic trainer for the St. Louis Blues, lifted the cup in 2019.