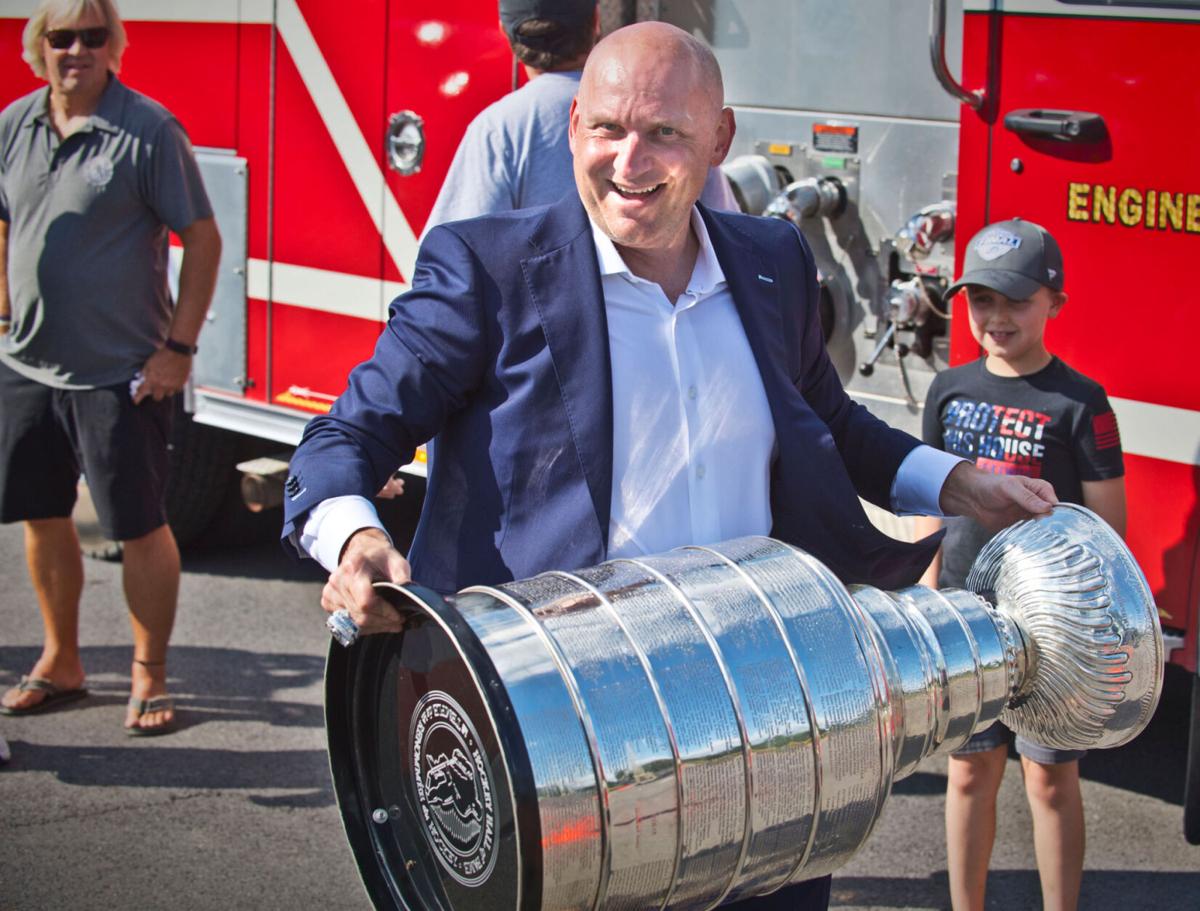 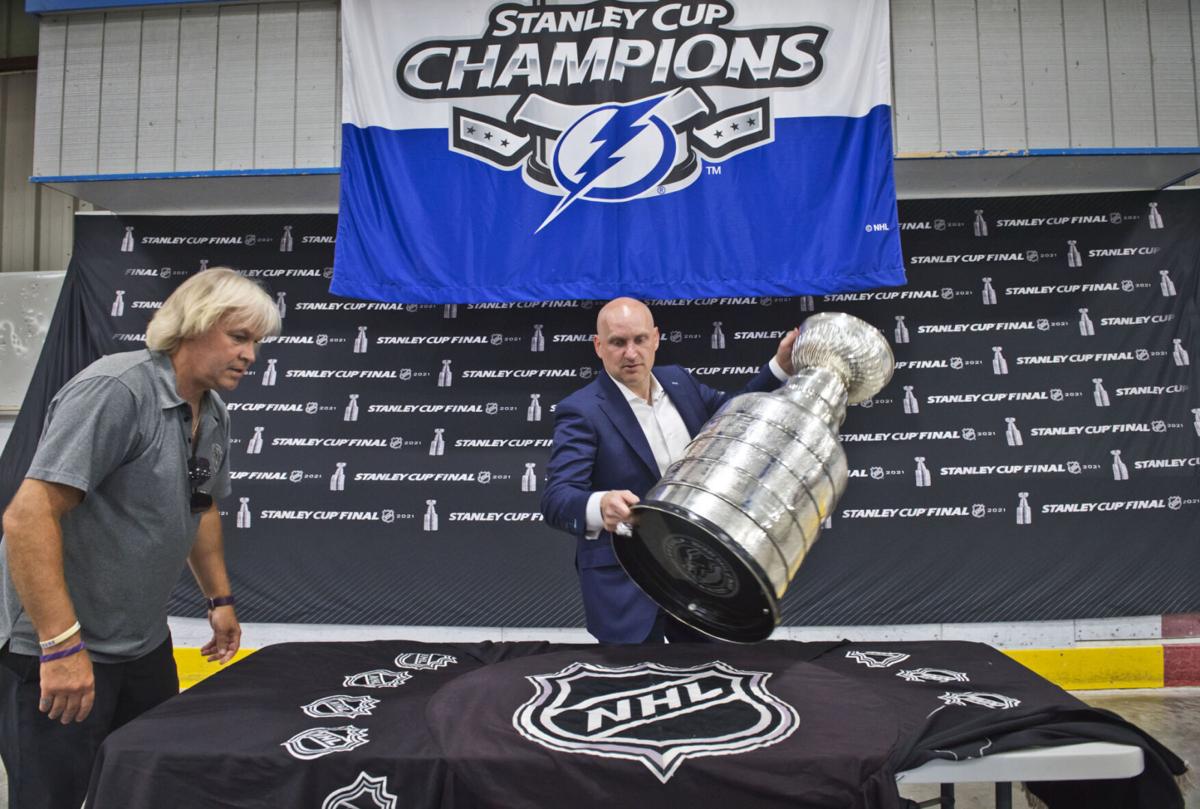 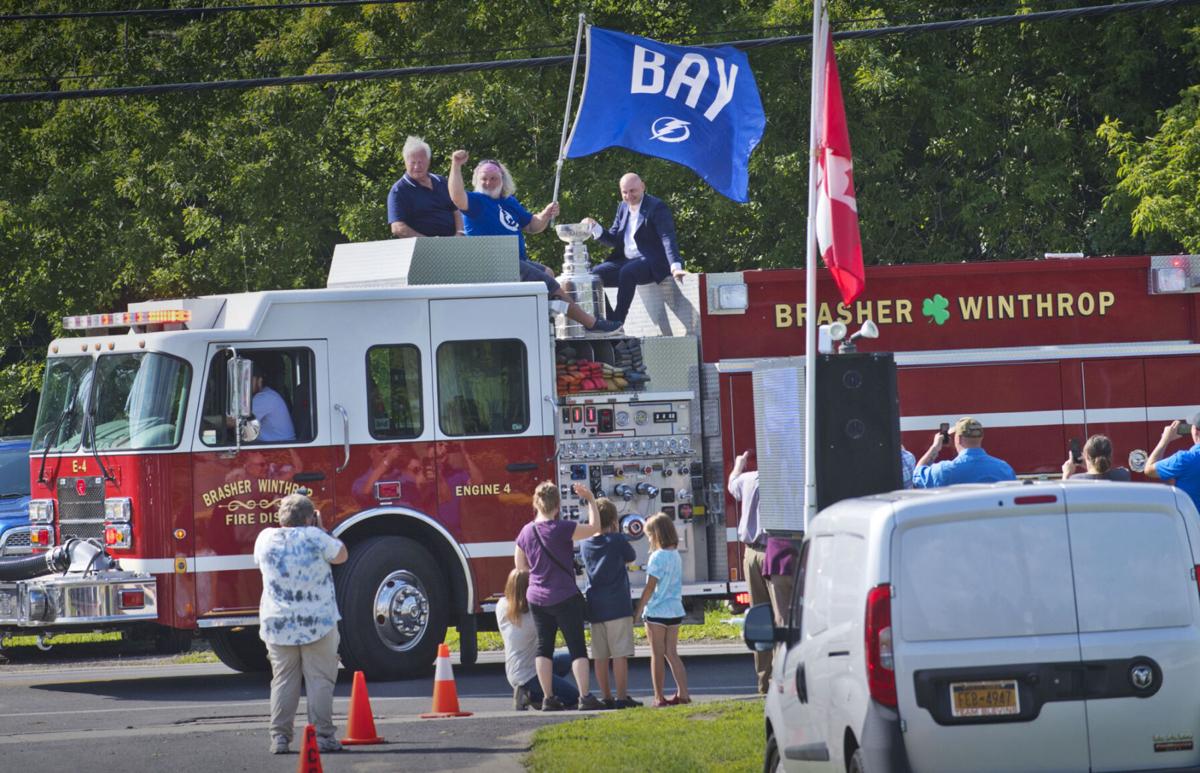 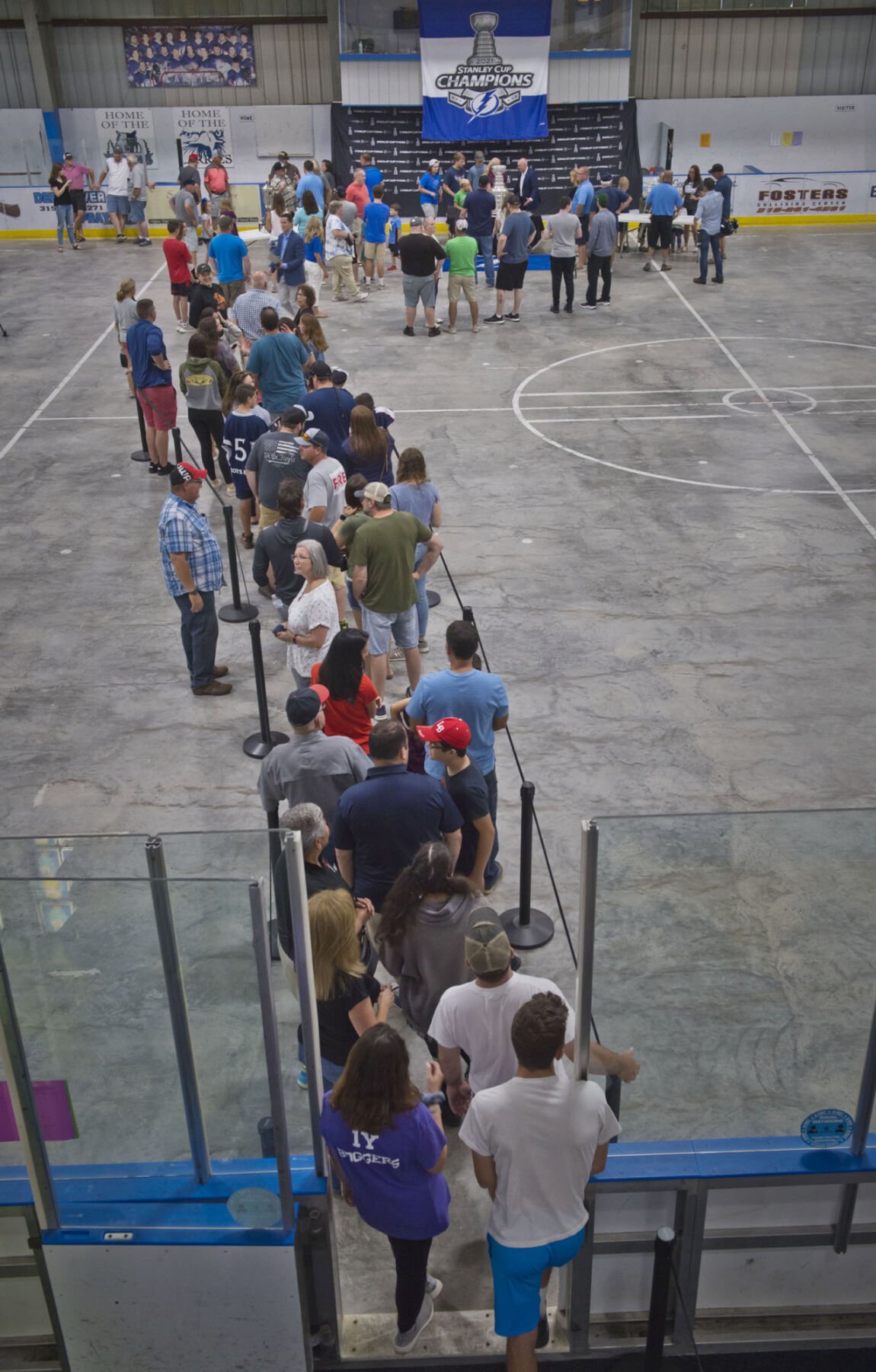 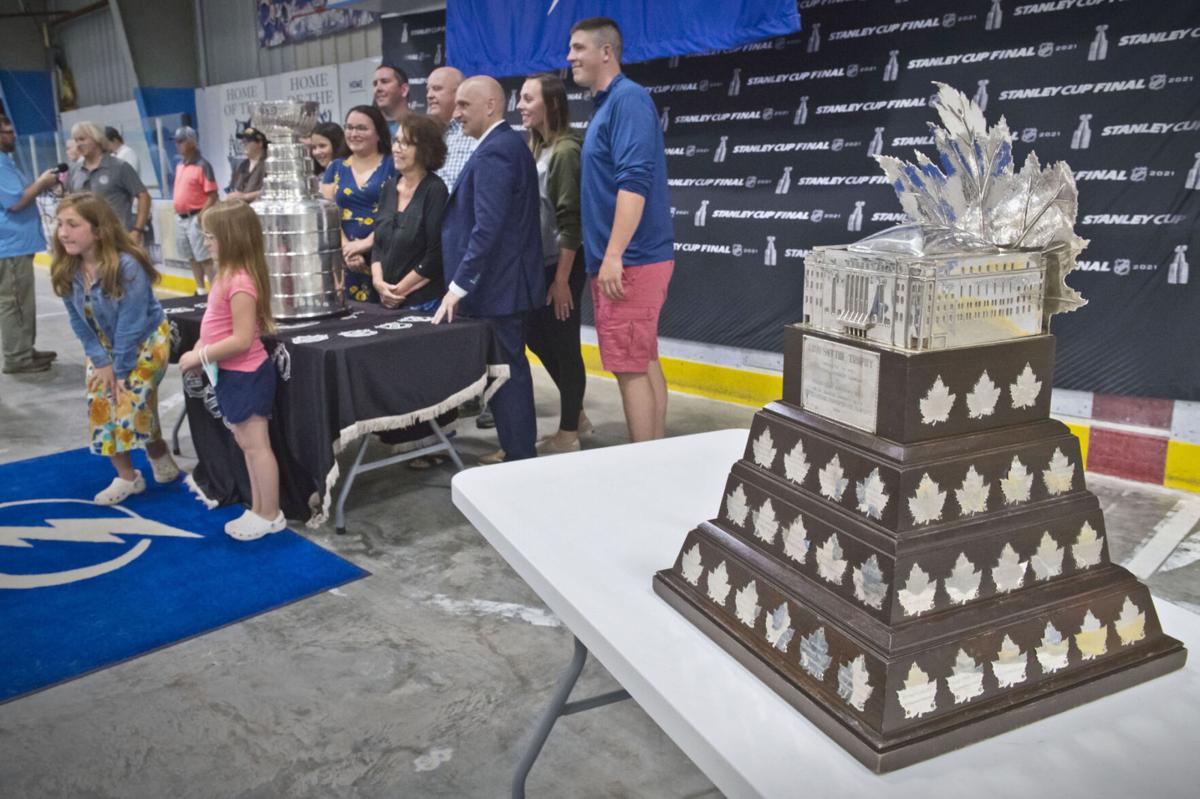 The Conn Smythe Trophy, awarded annually to the most valuable player during the National Hockey League’s Stanley Cup playoffs was on display on Wednesday at Tri-Town Arena in Brasher Falls. Christopher Lenney/Watertown Daily Times 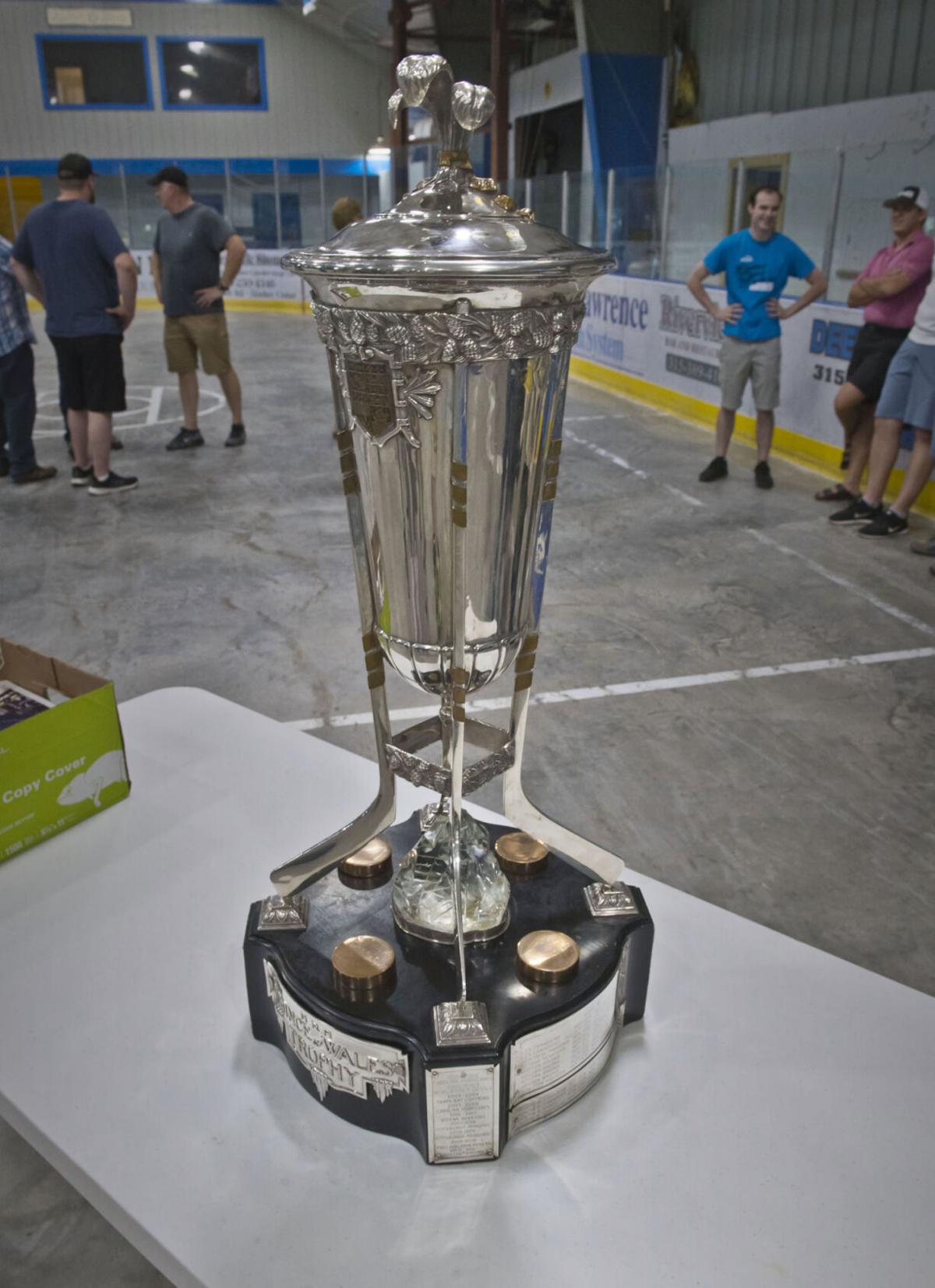 The Prince of Wales Trophy, July 21, presented annually to the Eastern Conference team that advances to the Stanley Cup Final, was on display on Wednesday at Tri-Town Arena in Brasher Falls. Christopher Lenney/Watertown Daily Times 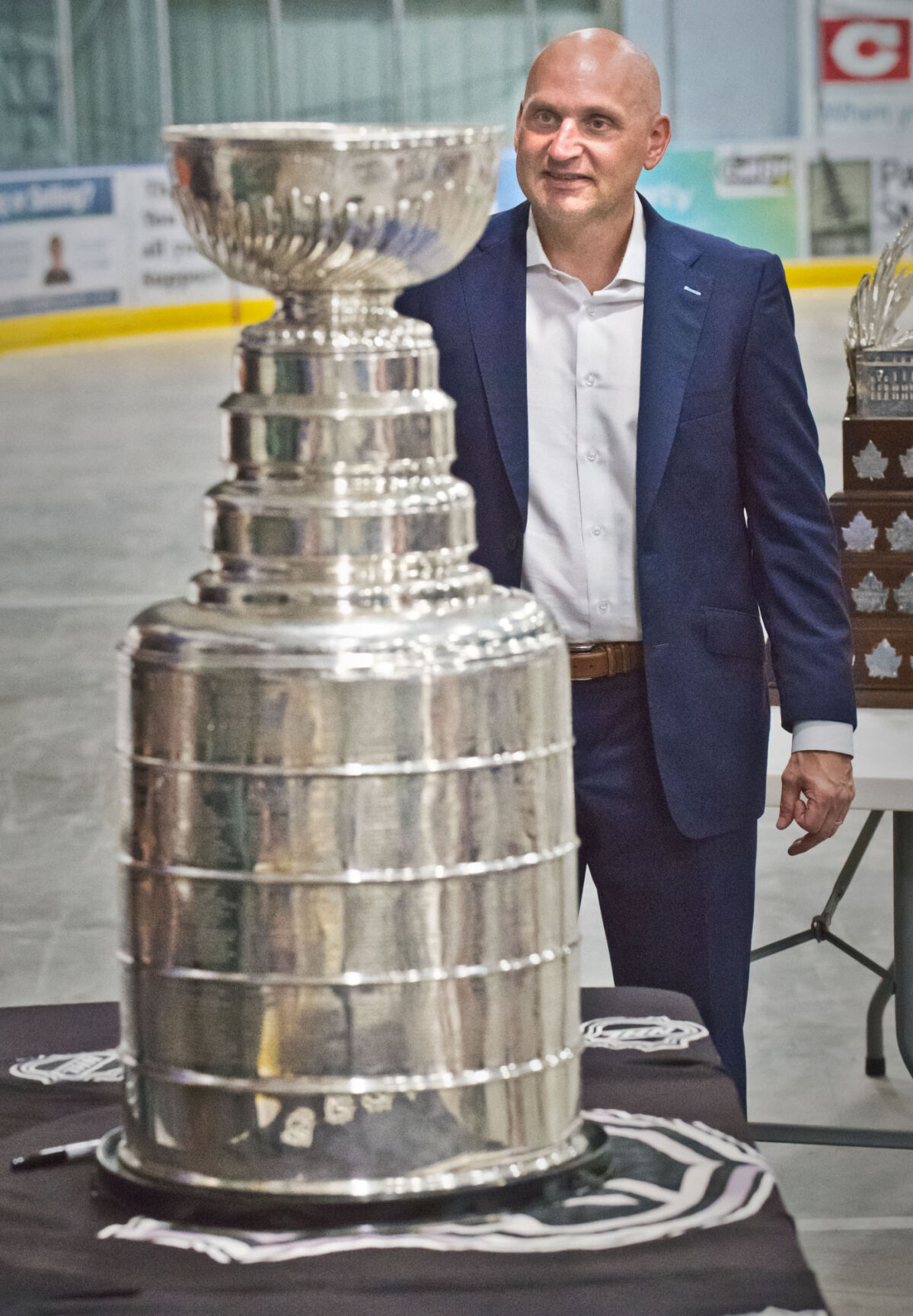 The Conn Smythe Trophy, awarded annually to the most valuable player during the National Hockey League’s Stanley Cup playoffs was on display on Wednesday at Tri-Town Arena in Brasher Falls. Christopher Lenney/Watertown Daily Times

The Prince of Wales Trophy, July 21, presented annually to the Eastern Conference team that advances to the Stanley Cup Final, was on display on Wednesday at Tri-Town Arena in Brasher Falls. Christopher Lenney/Watertown Daily Times

Lalonde, an assistant coach with the Tampa Bay Lightning, won the Stanley Cup for a second straight season recently, only this time he was able to fulfill his dream of bringing one of sports most famous trophies back home to share with the people from his hometown.

He started his time with the Stanley Cup in a personal moment, taking it to the grave of Massena native Mark Tyo, who was a teammate of Lalonde’s at SUNY Cortland.

After that Lalonde took the Stanley Cup to a hometown golf course owned by his former Larries coach, Mickey Locke, then he had a small gathering at his parents house before taking it to a public event at the St. Lawrence Central rink before another public event at a local bar.

“To bring it home, it’s an unreal experience,” Lalonde said. “I thought it would be important for people around here to see. This has been a dream come true, beyond my wildest expectations.

“I love how involved this community is. I’ve moved around. I have kids. My kids play hockey. You just can’t re-do the tight-knit, small community. It’s a unique experience. I cherished it. I knew growing up here it felt special. That’s what I remember most about this community. To think I was never going to bring the Stanley Cup to Brasher Falls. I know what it meant to me as a kid playing hockey in this arena. To be able to share that with people, this is awesome.”

Tyo died when he was 39 in 2015 and has been honored by Lalonde, as well as Providence men’s hockey coach Nate Leaman, in the past. Both men won championships wearing one of Tyo’s ties. It was no question for Lalonde what he wanted to do first with the Stanley Cup.

“Mark was a teammate of mine, we became best buddies (at SUNY Cortland),” Lalonde said. “Not only was he a good friend, but he was in love with what I did. I think he wanted to do what I was doing, which was coaching, so he actually lived it through me. I felt if I was ever to win that Stanley Cup, I was going to bring it to him. To experience that this morning with family and friends was awesome.”

Joining Lalonde with the Stanley Cup was Phil Pritchard, the man with the blond hair who is seen after the Stanley Cup is won carrying it onto the ice. It was his second time spending a day with Lalonde, who had to keep it at his home in Tampa after last season.

“Last year was a bit different, Derek embraced it by bringing his whole family down and we did everything there,” Pritchard said. “I think the irony of it all is they win again and now he has a chance with his big family, which is everyone in the community, and he brought it to them this time. It was great to meet the family and today we are meeting the extended family. It’s been awesome. It’s the town that makes the person.”

One of the people there was former St. Lawrence Central coach Jerry Mahoney, who was Lalonde’s football coach in high school.

“I remember Derek as a goalie and quarterback and a linebacker,” Mahoney said. “He was a great competitor. He was into every sport he played. He loved every one of them. When he signed up he was all in, and that was great. He’s been a lot of places and a success every place.”

Also among the people waiting to see the Stanley Cup up close was former St. Lawrence Central hockey standout Carter Rose, who is committed to Clarkson and probably a few years away from joining the Golden Knights.

“It’s super special,” Rose said. “It’s awesome he’s letting all the people see it. That’s what it’s really about, to let every see it. He’s kind of given me some advice along the way, because he’s been involved with junior hockey. (Clarkson) has been a dream of mine since I was a little kid. I’m excited to get started there.”

Massena native Zach Bogosian, who was on the Lightning for the first championship, got to spend a day with the Stanley Cup on Tuesday. He took it to a private event at the Massena Arena where it was photographed in the boys high school locker room.