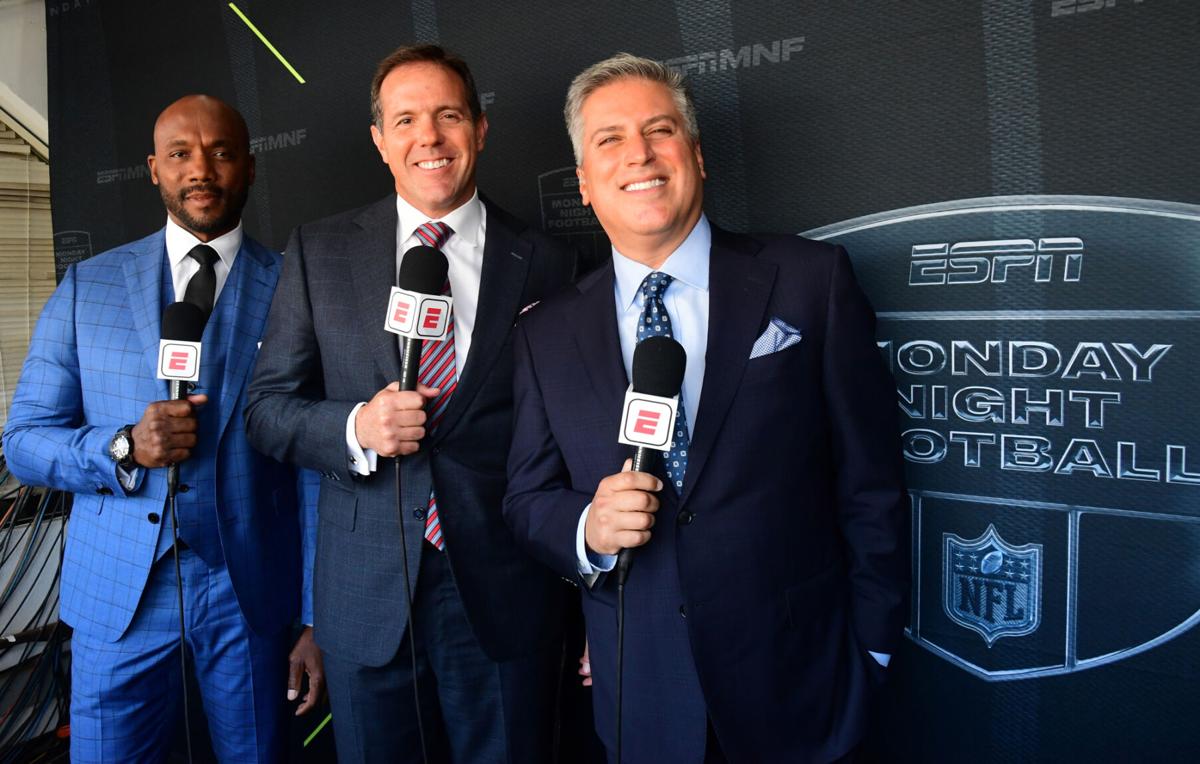 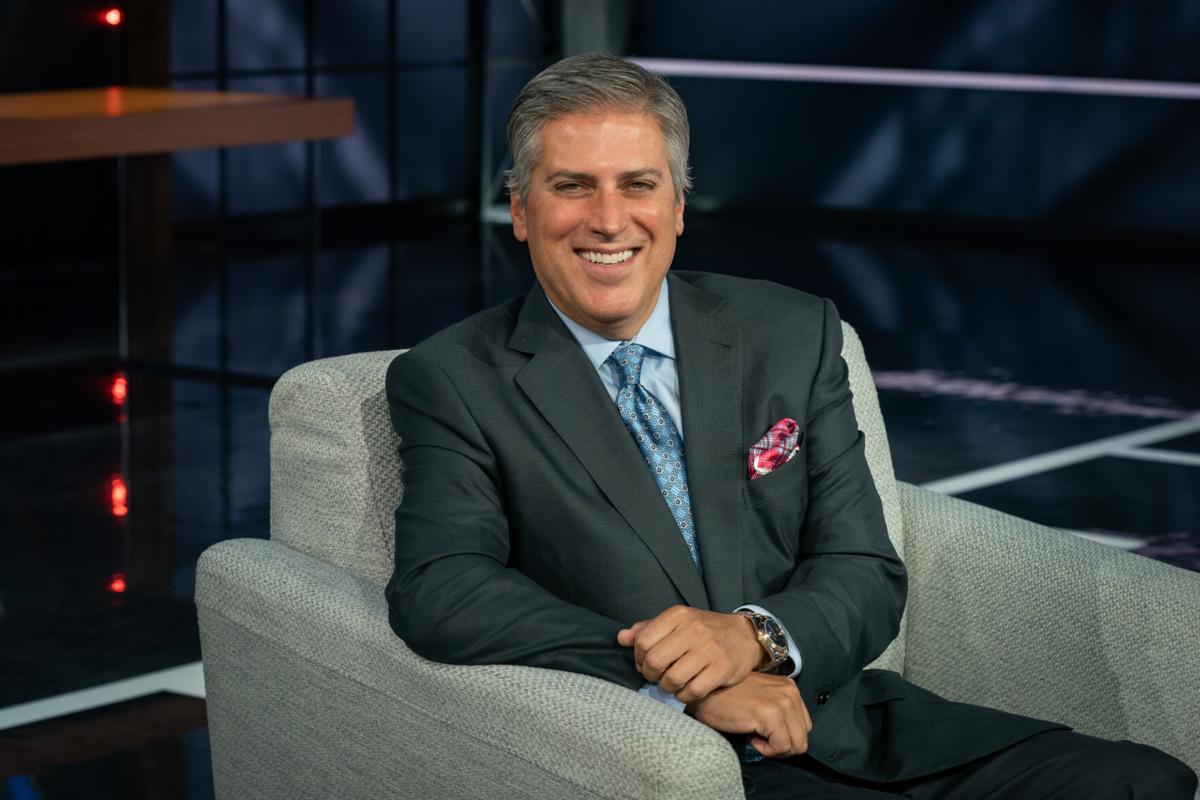 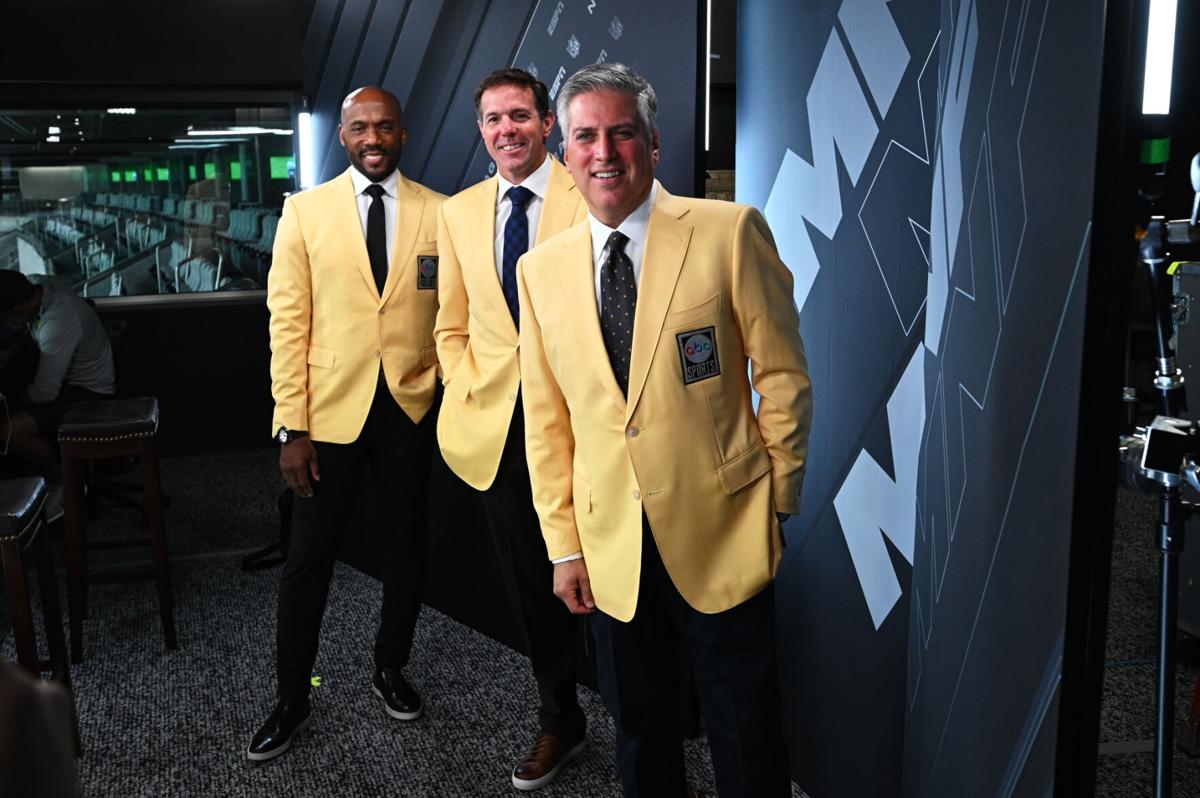 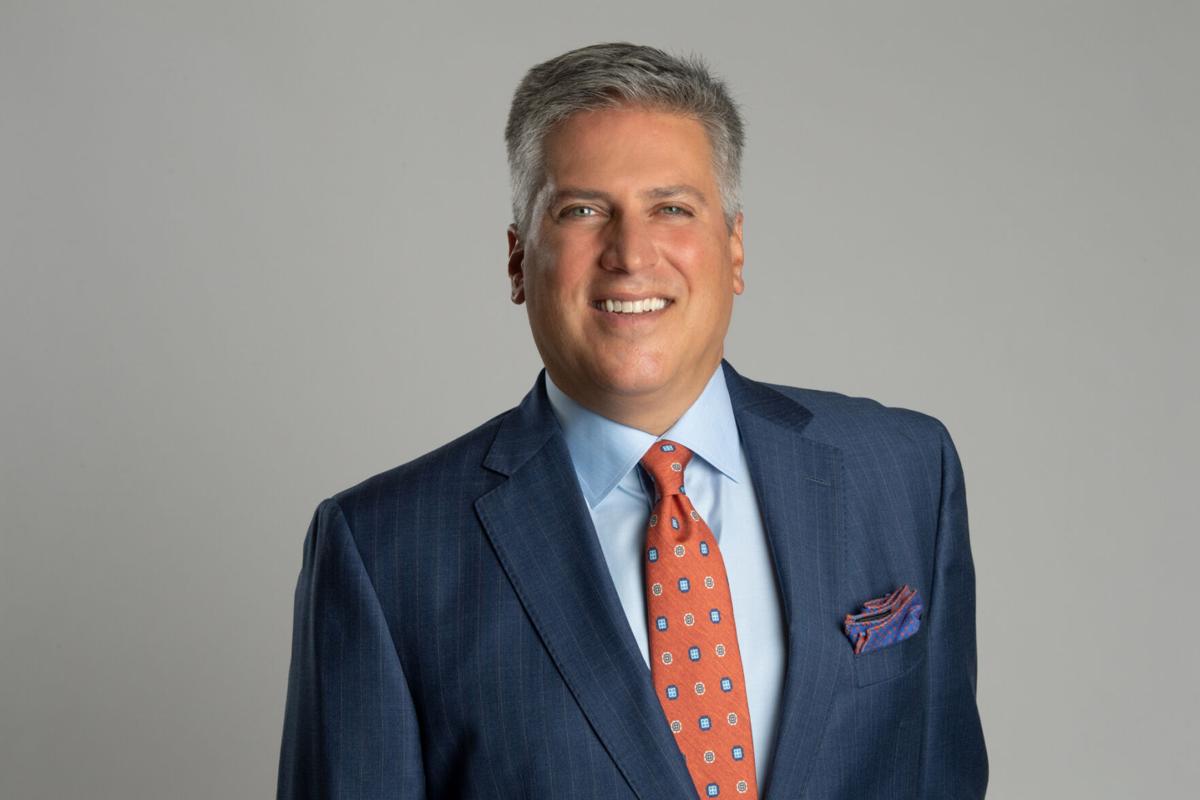 OSWEGO — Moments after Steve Levy learned of his promotion to the play-by-play voice of ESPN’s Monday Night Football, he reacted the same as 36 years prior, when he landed the coveted sports anchor role for WTOP-TV as a freshman at Oswego State University.

Levy wrapped up his first regular season in the preeminent football broadcasting position this past Monday night and eagerly anticipates the opportunity to call ESPN’s NFL Playoff game on Jan. 9 or 10.

The 1987 Oswego State graduate was officially named the seventh lead voice in the 51-year history of the iconic Monday Night Football franchise on Aug. 17.

Levy said that the first call he made after sharing the news with his family at home was to his parents, and he recalled the similarities to the day that his name first appeared on the list of anchors selected for his campus TV station.

“I ran down the stairs at (Hewitt) Union to call my mom, and I had that same kind of enthusiasm when I got the call about doing Monday Night (Football) and the first person I called was my parents again,” Levy said during a recent phone interview. “I’m lucky to still have them with me and still in good health, considering my age, so that was a big thrill.”

Levy has worked at ESPN since 1993 and been rumored for the prestigious spot multiple times before finally landing his self-described dream job this past summer.

He debuted as the primary voice of Monday Night Football along with new analysts, Brian Griese and Theo Riddick, and returning sideline reporter, Lisa Salters, on Sept. 14 in Denver when the Broncos hosted the Tennessee Titans.

The 55-year-old Levy described himself as “a work in progress,” through his first season and hopes that the new crew can put on its best performance during its finale on NFL Wild Card weekend.

“It’s been a blast, a lot of attention comes with this chair and I welcome that attention-slash-criticism, but it’s my first season and I’m just hoping to get better every single week,” Levy said.

“Like any good football team, we are really striving to get better every single week, and I can say I feel like we’ve made great improvements from where we were. … I’m constantly tweaking, I’m constantly watching film and recordings of our games and making adjustments.”

Due to COVID-19 protocol, the first-year broadcasting team has not convened outside the booth and has conducted its preparation work virtually. Levy said that he has yet to share a meal, a drink, or even a car to the stadium with his cohorts despite staying in the same hotels.

“It’s bizarre, we usually get a lot of help in the booth because it’s a big show, and now all these people have been replaced by monitors, instead of staring or talking to someone, I’m staring at another monitor,” Levy said.

“That has been part of the adjustment, but when you hear that music come on, I still get jazzed up when the opening tease rolls, and I hope that never goes away,” he added. “I hope I’m in this seat for a long time and I hope that excitement never goes way when you hear the: ‘Dun dun dun dun,’ and all that stuff. I know everybody says it but it’s the absolute truth for me, this was my absolute dream job.”

Levy called a Monday Night Football game last year as part of rare doubleheader, getting the chance to showcase his ability after years of service in a variety of roles for ESPN over nearly three decades.

Levy was a popular longtime SportsCenter anchor and studio host for ESPN’s NFL and NHL broadcasts. He has called play-by-play for NFL, NHL, XFL, and college football games on ESPN, and he covered the NHL Stanley Cup Finals with Barry Melrose for the network every year from 1994-2019.

ESPN’s lone reporter at the NHL’s championship series this past season, Emily Kaplan, included cardboard cutouts of the duo to symbolically keep their streak alive.

Levy credits much of his success in broadcasting to his roots at Oswego, referring to his college choice as a “top three life decision.” The New York City native said that he was initially seeking a larger city to study, leaning toward Buffalo State, before opting to hone his craft at a small school up north.

Levy worked as part of on-air production for all four years of his Oswego experience, including as sports director for WTOP-TV as a junior and senior. He wrote a column titled: ‘Levy’s Lines,’ for the Oswegonian and worked as sports editor of the student newspaper as a senior.

“Oswego provided an opportunity, with the broadcasting, the newspaper, the television, the radio, and I didn’t know this at the time when I was applying, but the opportunity to get four years of practical experience was really the key to whatever success I’ve had,” Levy said.

“All the big broadcasters went to Syracuse and that’s all great and I get that, maybe their equipment was better, or they had better facilities, but the way I understand it is because everybody wants to do what I want to do, you don’t really get hands-on experience until you’re a senior,” he added.

Levy was presented with Oswego State’s inaugural G.O.L.D. Award in 1997 to honor an outstanding graduate of the last decade who achieved prominence in their career.

He and his three college suite-mates have remained close since graduating and have met every Thursday via zoom since the start of pandemic. Levy said that the group spent four hours on a recent video conference.

“We just tell the same old stories over and over and they’re still entertaining to us, we’re still laughing about things 35 or 38 years later,” Levy said. “Oswego remains near and dear to my heart, I haven’t been back for a while now, obviously I love the hockey program and everything they’ve done. That was a big blast broadcasting the nationally-ranked hockey program all those years.”

Levy also got his first taste of covering the NFL during his tenure as an undergraduate student at Oswego State. He would often drive to Buffalo Bills games to report as a stringer and said that it was typically a financial net loss after renting a car and “begging,” for credentials to earn little or no income for his work.

More than 30 years later, those efforts have paid off for Levy, sitting at the pinnacle of his profession for the beginning of what he hopes to be a lengthy tenure calling classic Monday Night Football moments.

“This was the spot I always wanted to be,” Levy said. “There’s only one chair, and that’s what make the odds so against you in getting a job like this, so I’m living the dream.”