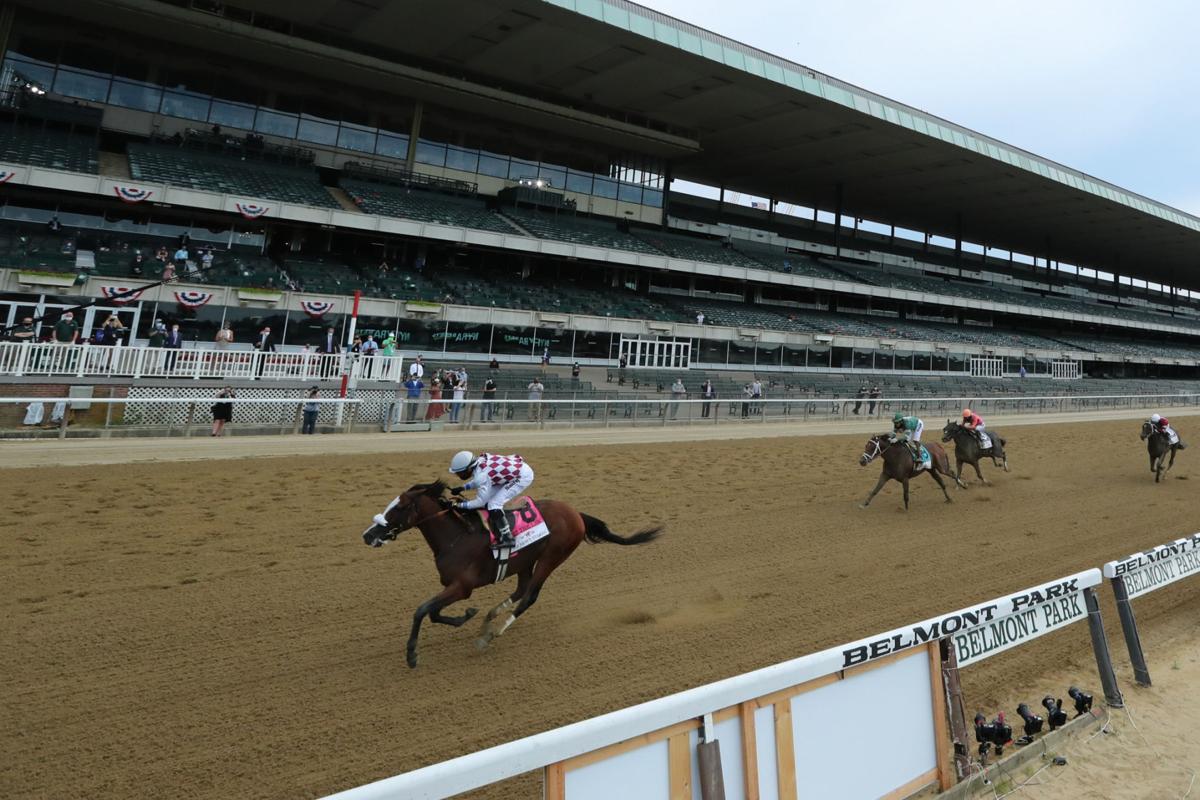 Tiz the Law, with Manuel Franco up, wins the 152nd running of the Belmont Stakes in front of a mostly-empty grandstand Saturday at Belmont Park. Brad Penner/USA TODAY Sports 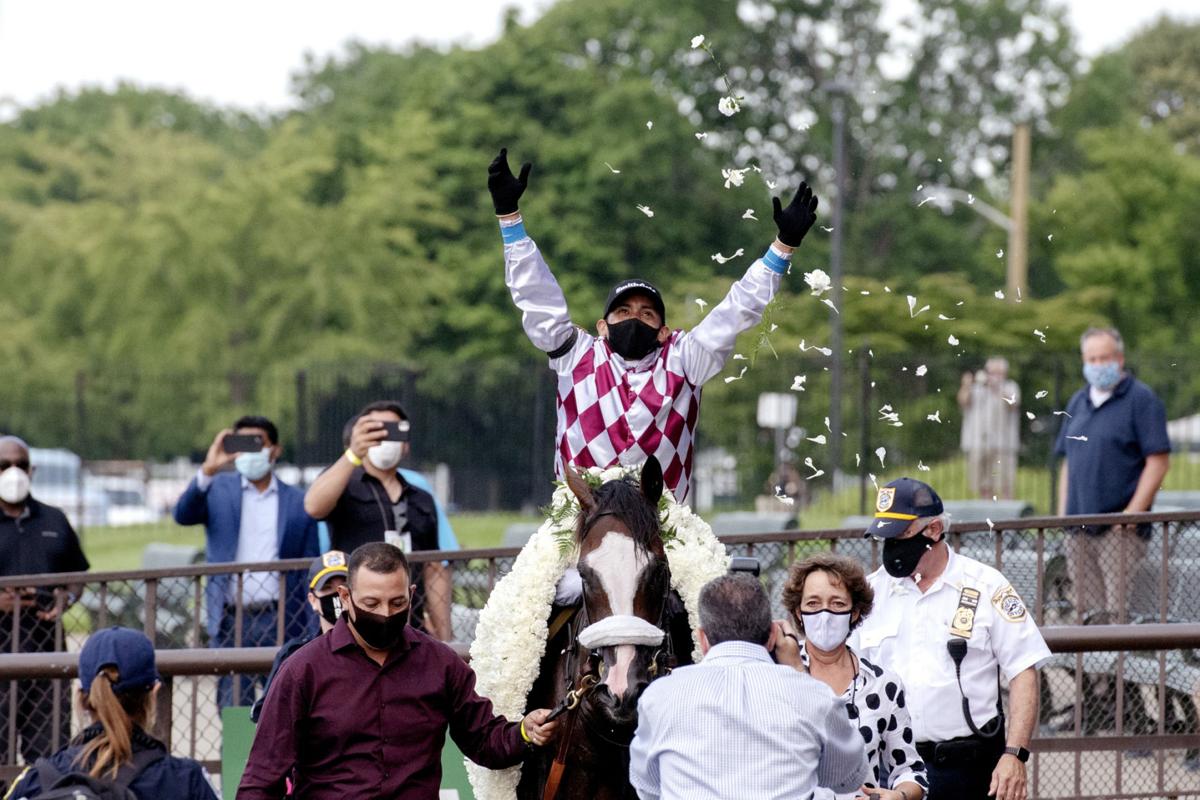 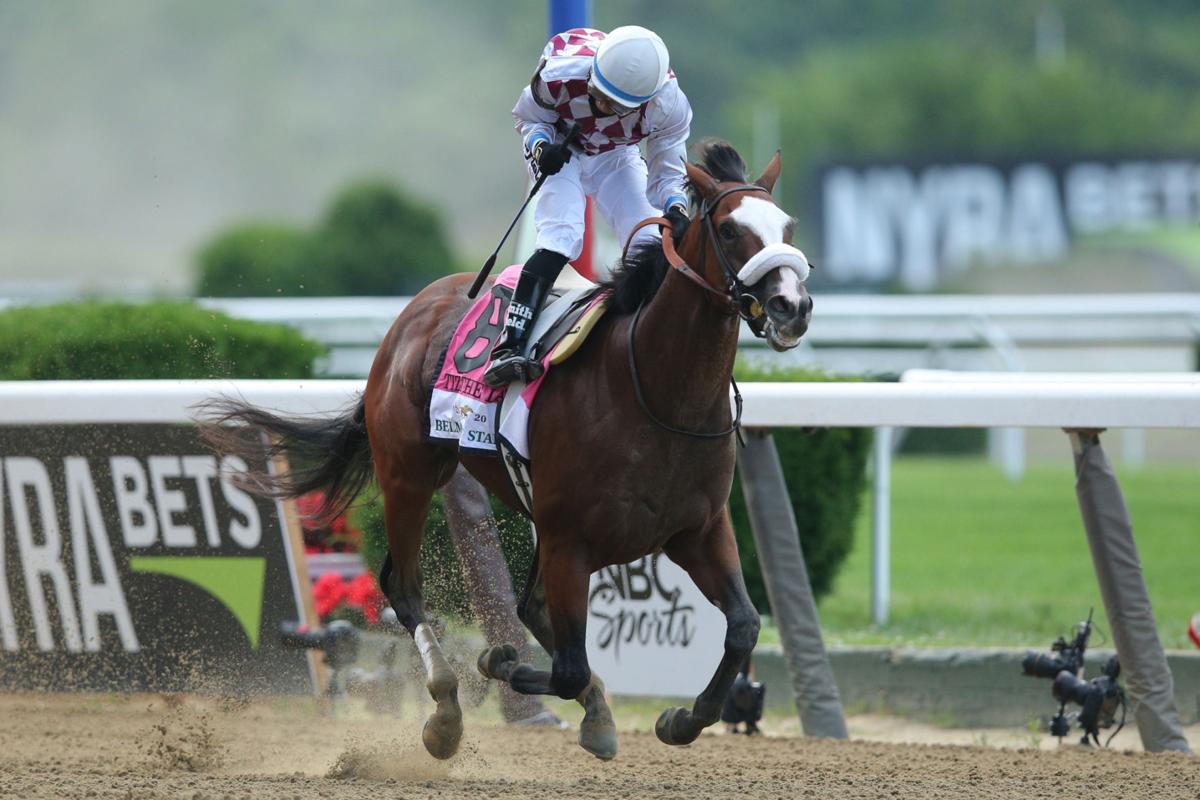 Jockey Manuel Franco pumps his fist after winning the 152nd running of the Belmont Stakes aboard Tiz the Law. Brad Penner/USA TODAY Sports 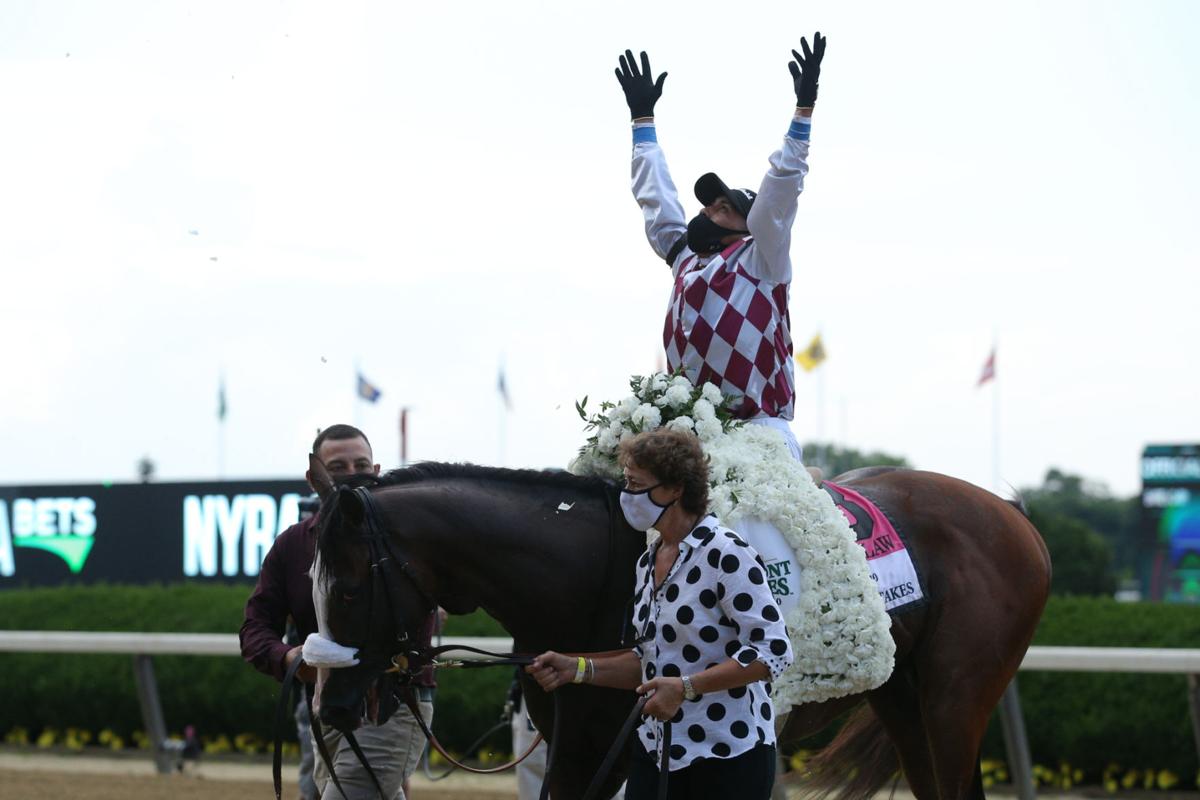 Jockey Manuel Franco reacts after winning the the Belmont Stakes aboard Tiz the Law on Saturday at Belmont Park. Brad Penner/USA TODAY Sports

Tiz the Law, with Manuel Franco up, wins the 152nd running of the Belmont Stakes in front of a mostly-empty grandstand Saturday at Belmont Park. Brad Penner/USA TODAY Sports

Jockey Manuel Franco pumps his fist after winning the 152nd running of the Belmont Stakes aboard Tiz the Law. Brad Penner/USA TODAY Sports

Jockey Manuel Franco reacts after winning the the Belmont Stakes aboard Tiz the Law on Saturday at Belmont Park. Brad Penner/USA TODAY Sports

In becoming the first New York-bred horse to win New York’s most celebrated race since Forester in 1882, Tiz the Law made 82-year-old trainer Barclay Tagg a first-time Belmont winner and evoked the memory of another New York colt, and less likely champion, Funny Cide, who also won the first race of the Triple Crown with a Kentucky Derby victory in 2003.

Tagg also trained Funny Cide and both horses are owned by Sackatoga Stables, started by six high school friends from Sackets Harbor, who purchased a yearling for $22,000 in 2001. Funny Cide, urged on by the old Sackets Harbor schoolmates who arrived at each race in a yellow school bus, went on to win both the Derby and Preakness two years later before finishing third in the Belmont.

On Saturday, Sackatoga managing partner and Sackets Harbor native Jackson Knowlton cheered on Tiz the Law amid a crowd of people at a restaurant in Saratoga Springs.

“I’m just glad I’ve lived long enough to have a horse like this,” Tagg said.

Tiz The Law, wearing Sackets Harbor school colors of maroon and gray reminiscent of Funny Cide, insisted upon the lead at the top of the stretch and made the stretch run a virtual coronation. He won handily by four lengths to give 25-year-old jockey Manuel Franco his first Triple Crown victory.

“I got the horse for the race,” Franco said. “I’m very happy with the opportunity owner Jack Knowlton and the trainer have given me. They know what they are doing, and the horse is very good.”

The Belmont, postponed two weeks from its original date because of the novel coronavirus pandemic and shortened from 1½ miles to 1, was the first of the three Triple Crown races this year for the first time.

Not only were fans barred from watching but the New York Racing Association didn’t allow owners either, so about half the Sackatoga stakeholders met in Pennell’s Restaurant in Saratoga Springs, beneath a covered patio.

“We’re going to have about half our partners there, about a group of 35 or so, with spouses and significant others,” Knowlton said Wednesday. “We’re just going to have to lay down the law if he wins, for people not to be kissing and hugging. But that’s going to be my job for the day.”

Saturday’s race set up just as expected with Tap It To Win going to the front and joined by Fore Left, the other front-runner in the race. Tiz The Law was sitting comfortably in a stalking position in third. When it came to exiting the far turn, Franco looked under his arm to rest of the field, a sign that he had plenty of horse left and planned to use it.

“I was pretty confident when I hit the 7/8 pole,” Franco said. “He was relaxed for me. He was so comfortable. ... I think that was the key for the victory.”

The Belmont was thrust to the front of the line when Churchill Downs moved the Kentucky Derby to Sept. 5 after the COVID-19 pandemic played havoc with all live sports. The Belmont is normally third in the rotation and at the grueling distance of 1 ½ miles.

The Belmont looked to be a great opening race of the three-race series as Nadal, the top-rated 3-year-old in the country, was scheduled to run for Santa Anita-based Bob Baffert.

Maxfield, one of the best horses racing in Kentucky, also took a pass on the race because of an injury. What was left was Tiz The Law and everyone else. He had won two Grade 1 races, while no other horse had won even one.

“Barclay doesn’t get a lot of big horses and big opportunities,” Knowlton said. “But when he gets them, he knows what to do.”

Tiz The Law had won four of five races before Saturday’s Belmont Stakes. His only loss had come over a sloppy track in the Kentucky Jockey Club Stakes. His first Grade 1 win was in the Champagne Stakes as a 2-year-old over the same Belmont dirt track. He also won the Florida Derby this year.

Normally, the entire Triple Crown is conducted in five weeks instead of five months. Tiz The Law might look for a race before the Kentucky Derby, possibly the Travers Stakes on Aug. 8.