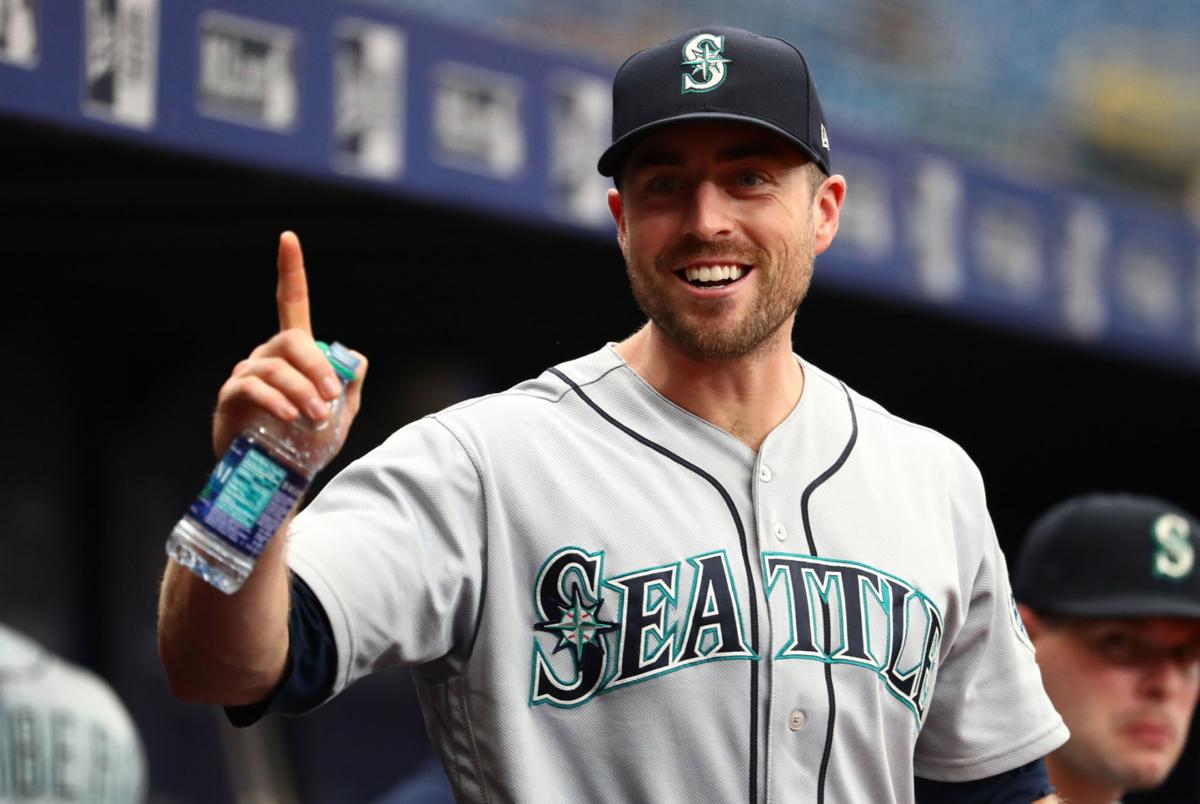 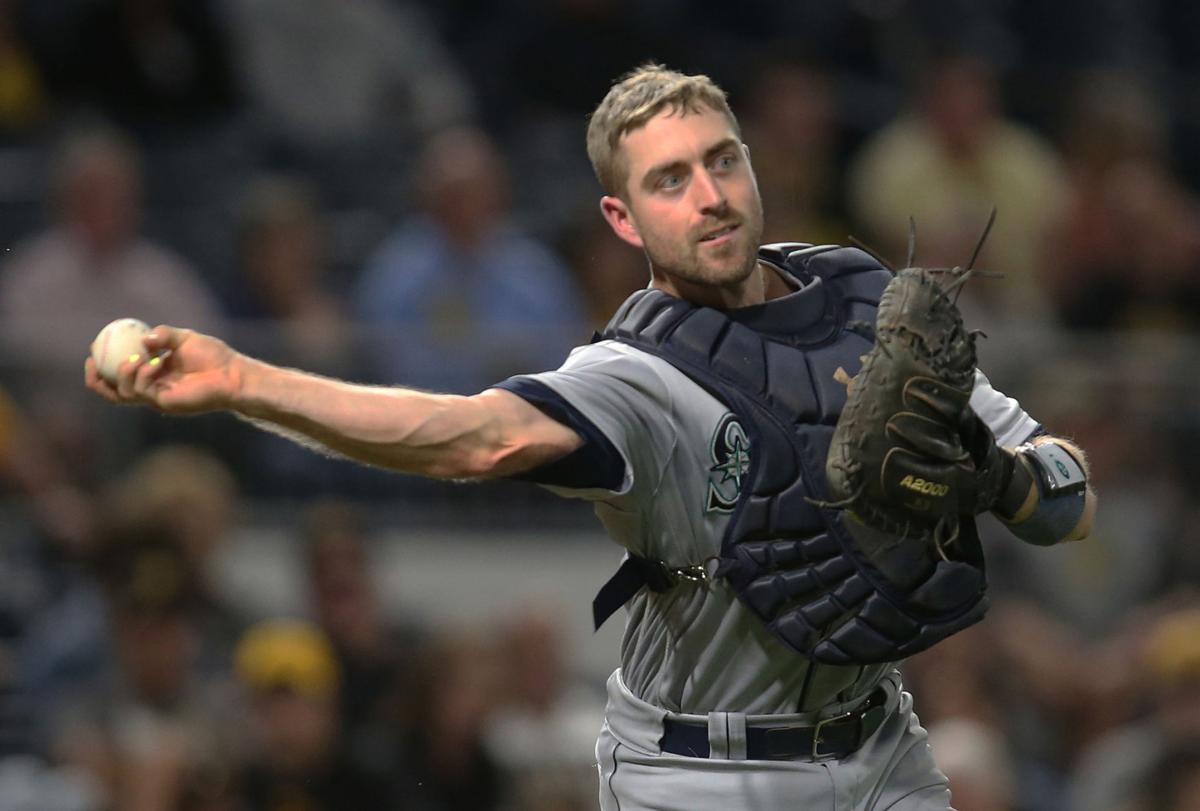 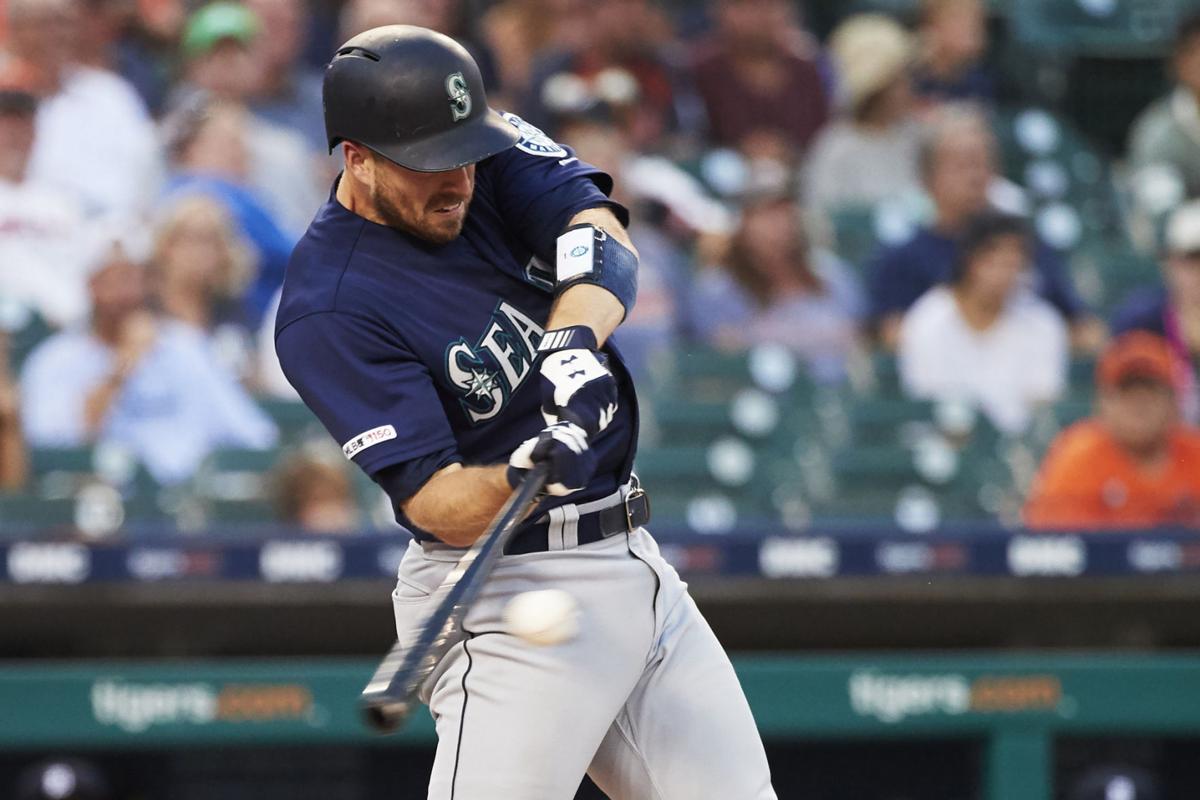 Seattle Mariners catcher Tom Murphy (2) hits a home run in the fourth inning of an MLB game against the Detroit Tigers on Aug. 13 at Comerica Park in Detroit. Rick Osentoski/USA TODAY Sports 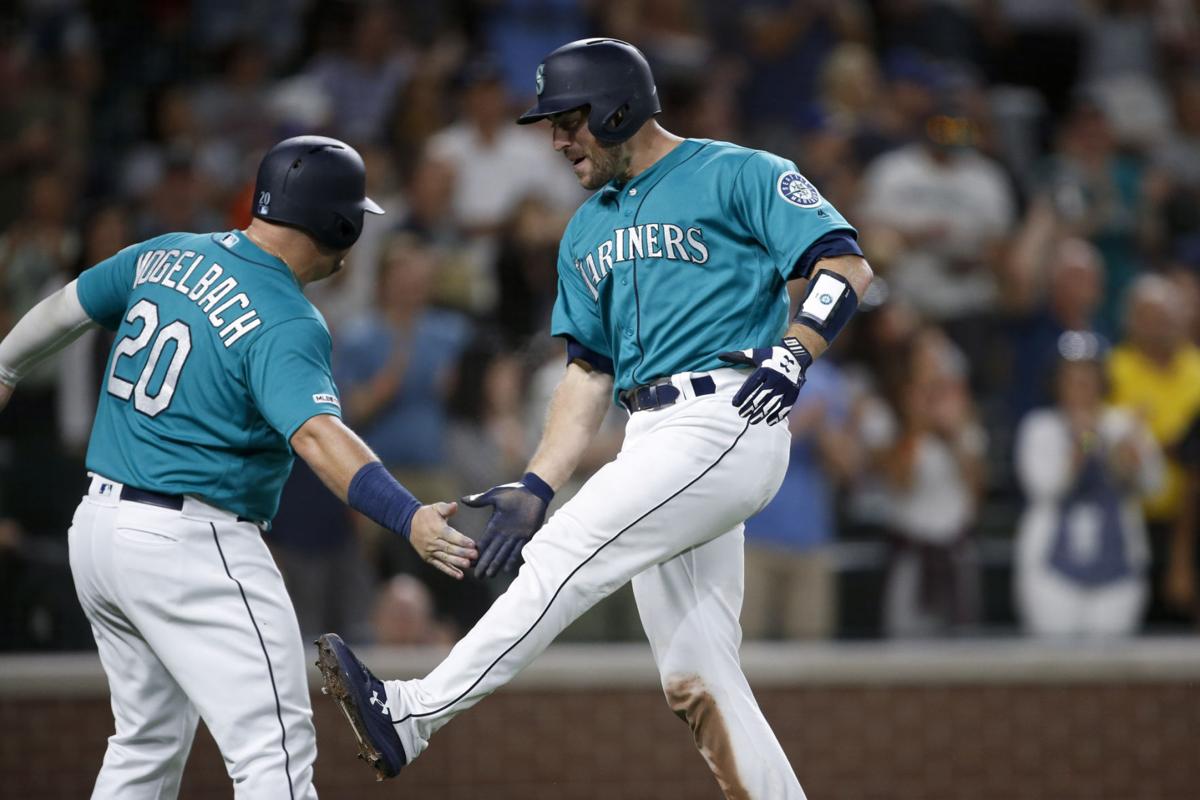 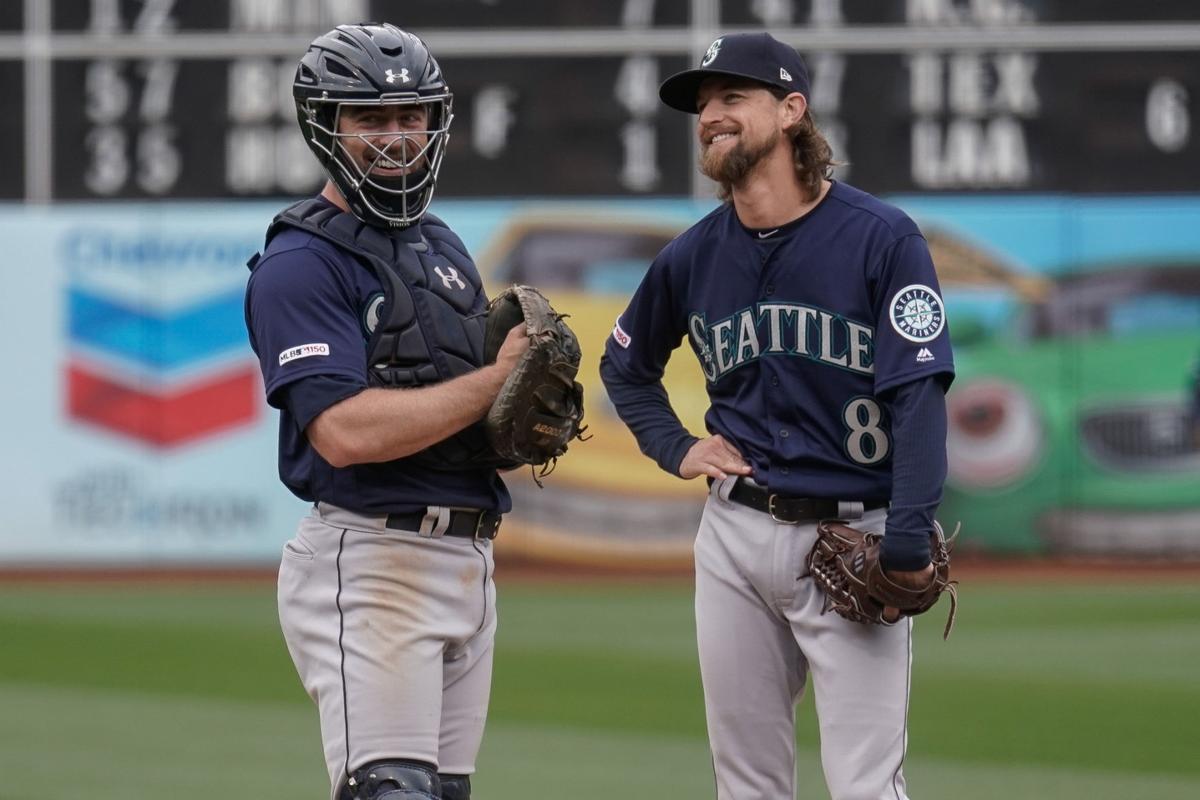 Seattle Mariners catcher Tom Murphy (left) and starting pitcher Mike Leake (right) smile in the game against the Oakland Athletics during the seventh inning on May 26 at Oakland Coliseum. Stan Szeto/USA TODAY Sports 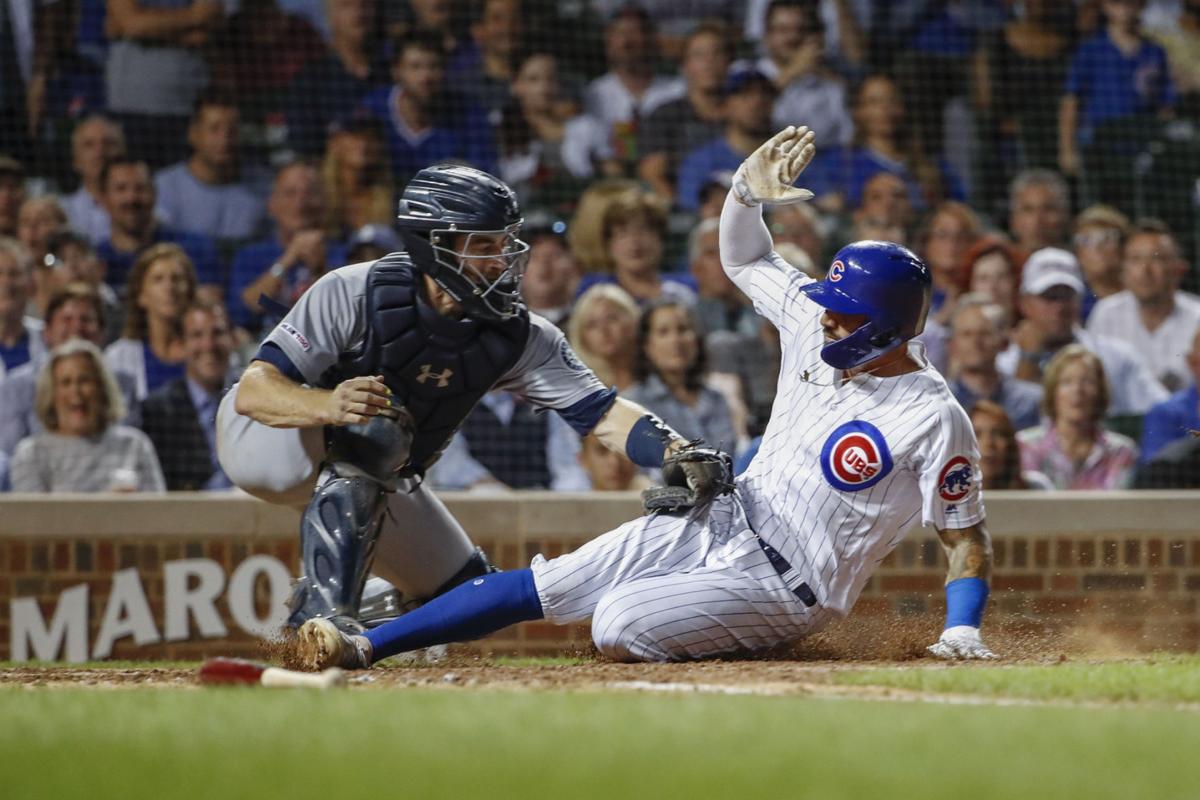 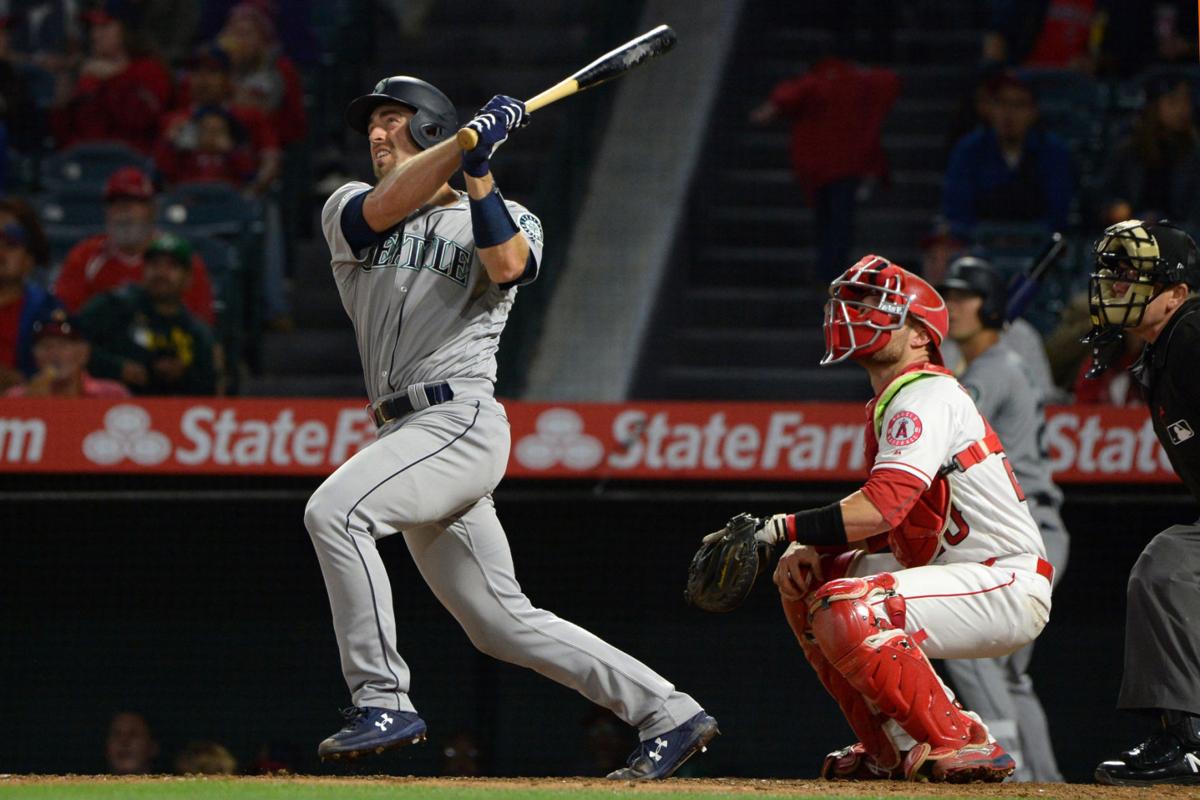 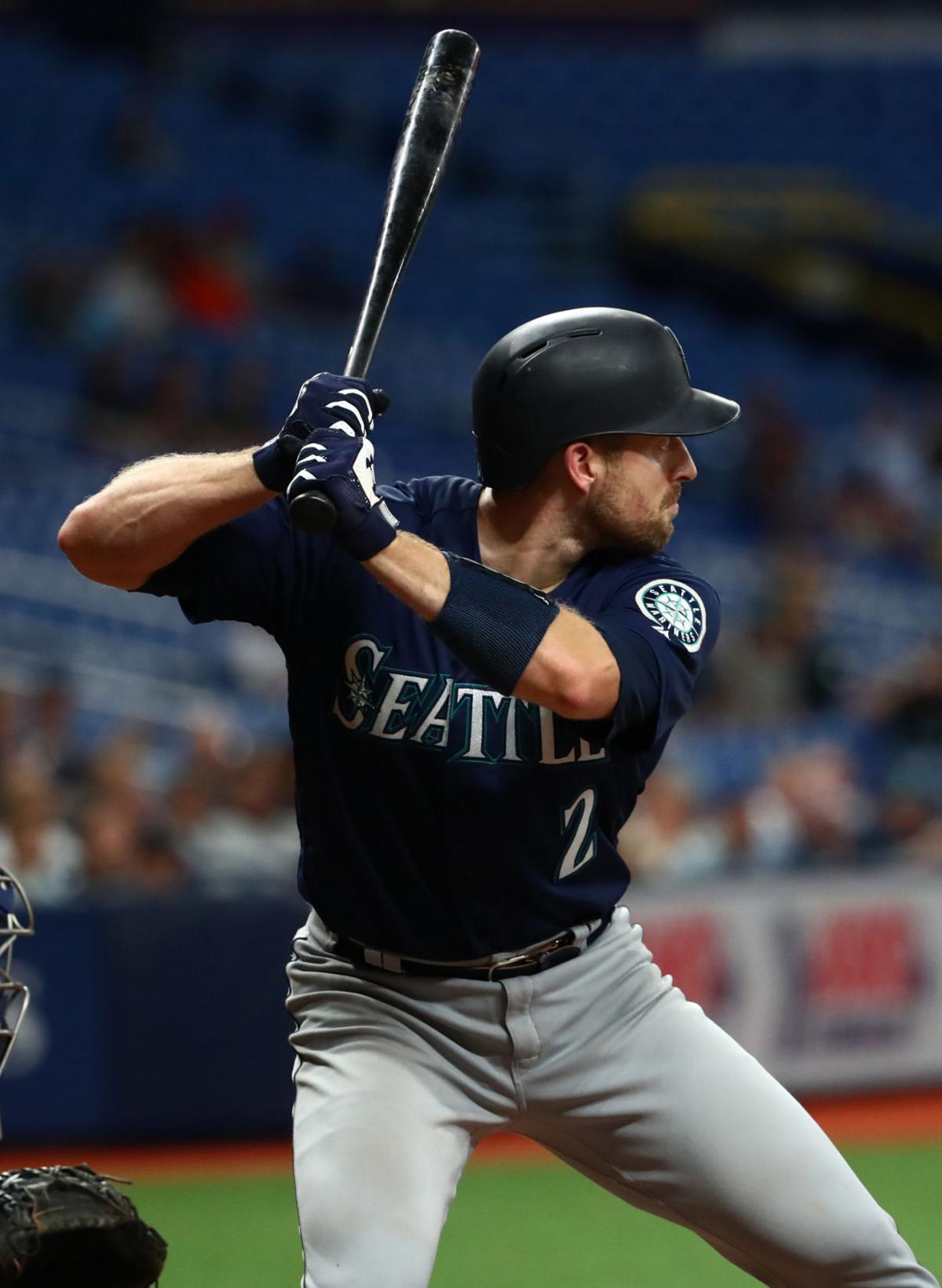 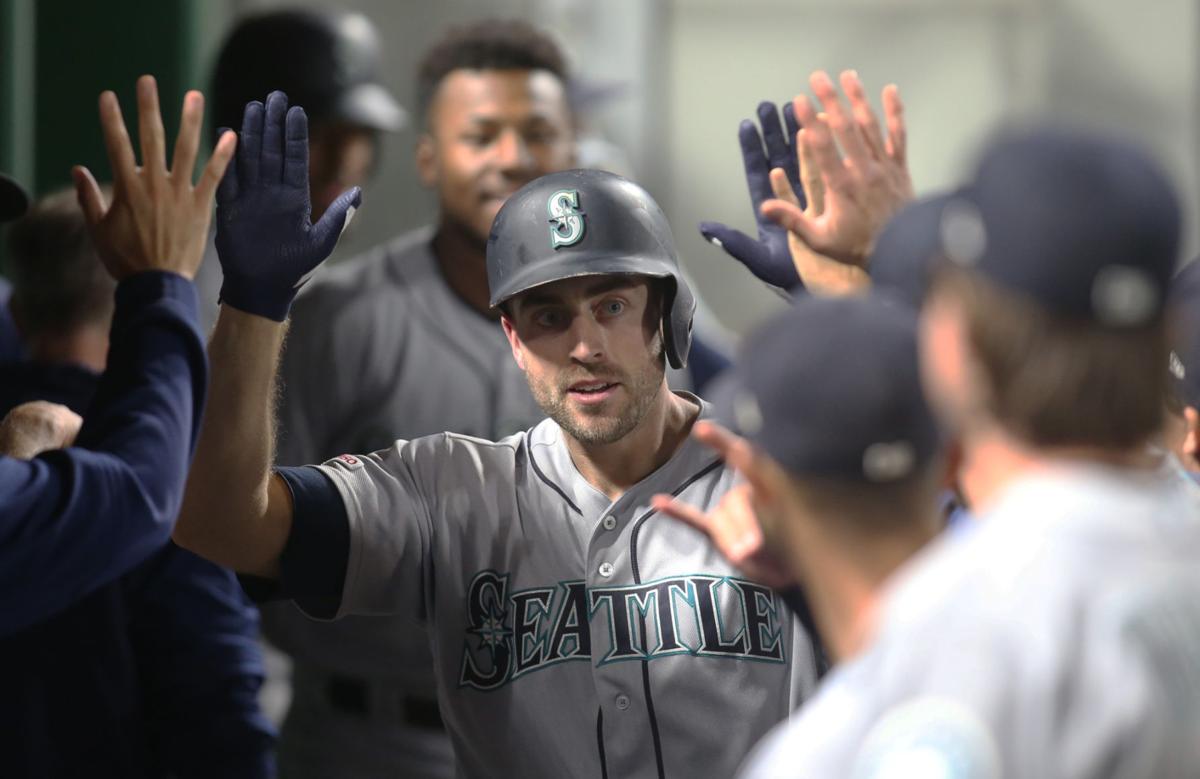 Seattle Mariners catcher Tom Murphy (2) is greeted in the dugout after hitting a solo home run against the Pittsburgh Pirates during the fourth inning on Sept. 18 at PNC Park in Pittsburgh, Penn. Charles LeClaire-USA TODAY Sports

Seattle Mariners catcher Tom Murphy (2) hits a home run in the fourth inning of an MLB game against the Detroit Tigers on Aug. 13 at Comerica Park in Detroit. Rick Osentoski/USA TODAY Sports

Seattle Mariners catcher Tom Murphy (left) and starting pitcher Mike Leake (right) smile in the game against the Oakland Athletics during the seventh inning on May 26 at Oakland Coliseum. Stan Szeto/USA TODAY Sports

Seattle Mariners catcher Tom Murphy (2) is greeted in the dugout after hitting a solo home run against the Pittsburgh Pirates during the fourth inning on Sept. 18 at PNC Park in Pittsburgh, Penn. Charles LeClaire-USA TODAY Sports

WEST MONROE — Tom Murphy smashed a towering home run in the midst of a career-best stretch last August and performed a cartwheel upon his return to dugout to the surprise of his Seattle Mariners teammates, momentarily allowing the unbridled joy that he experienced during his Major League Baseball breakout season to shine through.

That incident represented one of several that will long be cherished by the normally stoic Murphy — a West Monroe native and 2009 graduate of Central Square’s Paul V. Moore High School — during a whirlwind 2019 for the emerging MLB catcher.

Murphy, who produced career highs across the board during his first full season on an MLB roster, is now focused on creating more unforgettable moments and establishing himself as a consistent presence behind the plate in the new year ahead.

“I think at the end of the season when I was able to kind of reflect upon what had happened, I think more than anything this year has taught me that the day-to-day persistence of the work that was necessary to stay at that level and the work that was still needed in my career for me to improve,” Murphy said during a recent phone interview. “I think that’s the most important thing was that day-to-day consistency of showing up and being ready to play and being prepared like no other.”

Murphy — a 6-foot-1 and 218-pound right-handed catcher — played college baseball for the University of Buffalo and was drafted in the third round of the 2012 MLB Draft by the Colorado Rockies.

He spent most of his first six seasons rotating between the Rockies and their minor league affiliates, occasionally flashing his strong power-hitting capabilities when presented with MLB opportunities.

Murphy played through spring training with Colorado to start the 2019 campaign but was eventually designated for a minor-league assignment and subsequently claimed off waivers by the San Francisco Giants. He immediately flew to San Francisco and played in a few MLB exhibition games for the Giants, but just four days later on March 29, he was traded to the Mariners.

Murphy said he was told he’d be starting for Seattle against a left-handed pitcher for the Boston Red Sox a few days after his arrival and instantly felt like the biggest opportunity of his career thus far had come. Murphy said his family was still located in Scottsdale, Ariz. – the Rockies’ spring training site – when he was traded from San Francisco to Seattle.

“At that point I had already had quite a whirlwind, and my family was kind of stuck in Scottsdale in limbo, so I was really happy to find out where I was going to be for the season and hopefully, find a way to stay,” Murphy said.

Murphy said his initial conversations with members of the Mariners front office provided him further confidence that he was viewed favorably in the organization. The club told Murphy that they had tried to trade for him the year prior and rated him as the No. 2 catcher on their 2012 draft board just behind Mike Zunino, now of the Tampa Bay Rays, who they selected with the third overall pick that year.

“It was very reassuring to hear that they had been with me for that long and kind of keeping tabs on me,” Murphy said.

Murphy started 76 MLB games for the Mariners, more than double his previous best of 36 the year prior with Colorado, and posted career highs of 18 home runs and 40 runs batted in to go with an .859 OPS and a .273 batting average.

He tied for ninth among all MLB catchers in home runs after hitting just 10 total in his career entering 2019, and his slugging percentage of .535 ranked second only to Minnesota’s Mitch Garver (.630) among MLB backstops that registered at least 250 at-bats.

“Of all the players I’ve ever been around, he’s made the most change in his game from day one of the season to where he’s at now than anybody I’ve ever seen in the middle of a season,” said Seattle manager Scott Servais, a former MLB catcher of 11 years, during a recent interview with MLB.com. “I’ve seen a lot of guys change things in the offseason and it plays out, but in the course of a year, what he did from where he’s started to where he’s at right now was an unbelievable change.”

Murphy delivered a series of power-hitting displays throughout 2019, highlighted by a trio of games in which he launched two home runs.

Murphy went yard twice in games played on June 9, Aug. 13 and Aug. 19, and each outing came in the midst of longer power-hitting performance streaks. Murphy compiled a scorching stretch in June that consisted of five home runs in a five-game span, including a homer in three straight games, that occurred during a nine-game hit streak overall.

Murphy credited his work with Seattle hitting coach Tim Laker and his assistant, Jarret DeHart, for the long-ball onslaught.

“Those guys and I really hit it off, really right off the bat, I was open to any suggestions that they had,” Murphy said. “That first little streak of hotness was kind of like the appetizer where our work was finally starting to come together and we were seeing the results on the field. I had been OK up to that point but I knew I was better.”

Murphy also belted six home runs in a four-game stretch between Aug. 13-20, a period that included a pair of two-homer performances and the impromptu cartwheel during a game at the Detroit Tigers.

Murphy said he was speaking with an assistant coach before the first pitch about the large size of the Detroit dugouts and quietly promised that he would perform the cartwheel if he went yard that game, which he did in his first at-bat. The celebration caught his teammates off guard and most were seen laughing at the action and enjoying the outburst.

“I think people got to see a different side of him, that he really is a jokester,” said Tom’s mother, Kelly, who owns/operates Murphy’s Automotive along with her husband, Tom, in Central Square. “I think it was (Kyle Seager) that got a three-run home run and the first thing he said (in a postgame interview) was that he couldn’t believe Tom did the cartwheel, because he’s always very serious, because that’s his job, so to see him kind of break loose that night was really awesome.”

Murphy experienced one of his greatest games behind the plate on July 19 when he caught for Seattle starting pitcher Mike Leake, who was paired with Murphy as his regular catcher soon after Murphy arrived to the club, threw a one-hit shutout to key a 10-0 win over the Los Angeles Angels after taking a potential perfect game into the ninth inning.

Leake, who was traded to Arizona later in the summer, surrendered a single to lead off the ninth inning to fall just short of completing the 24th perfect game in MLB history and the first since former Seattle ace Felix Hernandez accomplished the feat on Aug. 15, 2012.

“It was just an absolute blast,” Murphy said. “It’s hard to describe the emotion going in to that ninth inning just that I was feeling, I can’t imagine what Mike was feeling at that time. We had it all set up to where we were facing the bottom of the order in the ninth, and a ground ball just got through and we got a little unlucky there, but to be that close to history at the Major League level was incredible.”

Murphy also made three pitching appearances of his own last season — his first time on the mound since pitching for the Redhawks in high school — and tossed a total of three innings in relief while allowing one hit, one walk, two earned runs, and two strikeouts.

Each of Murphy’s pitching appearances came during lopsided games with a limited bullpen, but he was eager to contribute in any way he was asked. Murphy said that he became comfortable on the mound during his second outing and opted to throw additional pitches on top of his fastball.

Murphy is signed with Seattle through 2020 and eligible for salary arbitration the following season. The Mariners finished last in the American League West Division with an overall record of 68-94 during a rebuilding year, and Murphy believes that the chance to prove his worth as part of a developing squad is the once-elusive opportunity that he had long been seeking.

Murphy was also able to live with his family during the season for the first time in his career, which helped make the on-field breakout all the more enjoyable. He lives with his wife, Lindsay Sandy-Murphy, who is also a Central Square graduate, along with their eight-year-old daughter Tessa and one-year-old son Jase. Tom Murphy is the son of Tom and Kelly Murphy, and also has a brother named Jake who graduated from PVM High School.

“I’m very thankful for every piece of it, really, going to an organization that gave me an opportunity to start off the season right at the big-league level, gave me opportunities to fail and gave me opportunities to succeed, and go through the ups and downs of the season without there being any significant repercussions,” Tom Murphy said of his 2019. “That opportunity alone is what I’m most thankful for, because over the course of the season, there was never a feeling like a doomsday week was coming, it was always just: ‘How are we going to get better and how are we going to progress?’ That type of mind-set really helped me.”