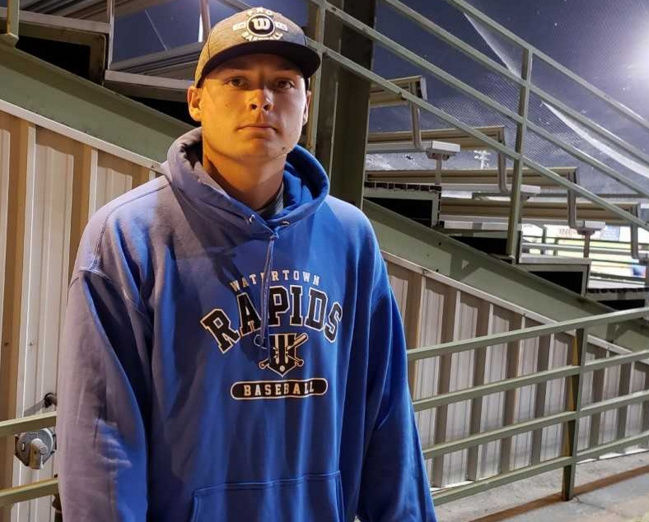 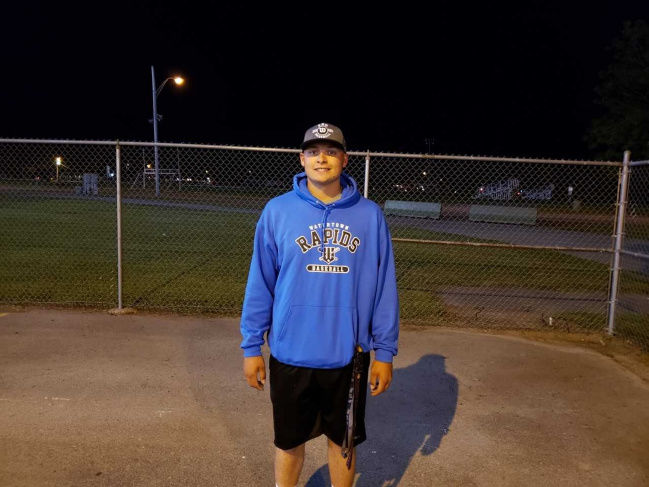 WATERTOWN — A college student, Kalani Zehr has spent most of the summer moving lawns for a landscaping company.

Then while at the movies one night, he received a text from Watertown Rapids coach Mike Wood, also Zehr’s pitching coach at St. Lawrence University, which changed Zehr’s summer.

“I was driving by one night and I saw the lights on (during a Rapids game) and I wondered ‘How’s Coach Wood doing and stuff?’” Zehr, a Lowville native, said. “And he actually texted me that night and told me he needed a relief guy.”

Zehr said the opportunity presented to him, to pitch summer baseball in the Perfect Game Collegiate Baseball League, was a surprise to him.

Zehr, a Lowville Academy graduate, who completed his sophomore year at St. Lawrence in the spring, joined the Rapids in late June.

“I wasn’t around here before, I work during the day and I was playing fast-pitch softball at night and I was trying to throw bullpens and stuff, keeping my arm loose,” he said. “And then this came, I was excited.”

Zehr has welcomed the chance to pitch in a wooden bat league for the Rapids, playing with and against some talented players.

“It’s great to be out here playing against really good competition,” Zehr said. “A lot of D-I and D-II guys, so it makes you pitch at a higher level. You get a lot of experience playing with a lot of young guys, rising sophomores, juniors, seniors, so it’s really cool.”

Heading into the final day of the regular season, Zehr has made eight appearances, all in relief, for the Rapids.

“Some of these guys we play against are from big SEC schools, like Alabama, guys like that,” he said. “I don’t see them at all when I’m playing during the summer or past years I’ve played. So it’s an eye-opener.”

Zehr made his debut with the Rapids on July 1 in a game against Adirondack in Watertown at the Alex T. Duffy Fairgrounds. He has totaled 10 strikeouts in 15 1/3 innings, posting a 5.28 earned-run average while walking eight.

“Kalani was a midseason pickup here and he’s done pretty good,” Wood said. “Tonight (July 25), he kind of bounced back in (his) second inning and after finding the zone, and he did really well.”

“I’ve done all right,” Zehr said. “I’m not any standout or anything, I’m just trying to get my innings in and get better and develop my second and third pitches. Get more control with it.”

He continued: “I feel when you play against good competition, you pitch better and you pitch at a higher level. I always feel that way and it’s fun playing against these guys, against good hitters. You can’t make mistakes and when you do, you pay for it.”

During his sophomore season, his first playing for St. Lawrence after he recovered from a knee injury, Zehr made nine appearances for the team, all in relief.

He recorded one win in his only decision of the year, in a 9-8 home nonconference victory against SUNY Canton on April 11.

Zehr pitched 8 1/3 innings for the Saints this spring, registering a 4.32 ERA, striking out seven and walking eight. Four of the 11 runs were unearned.

“He was probably one of our best bullpen guys up there this year,” Wood said of Kalani’s season at St. Lawrence. “So now he’s kind of in transition, hopefully learning some stuff and getting better for next fall.”

Wood hopes Zehr’s time with the Rapids will pay dividends at St. Lawrence as well.

“It looks like he’s going to hopefully gain a couple miles an hour of velocity and that will help big time at the Division III level at St. Lawrence,” Wood said. “Getting a little more velocity and work on a couple breaking pitches. If he starts to develop a slider and a breaking ball, I think he’ll be really effective.

“Right now he’s going to rely on his fastball.”

While his fastball has been his strength, Zehr, who stands at 6-foot-2 and is listed at 230 pounds, continues to work on other pitches to sharpen and improve his arsenal.

“My fastball, curve ball,” he said. “My curve has developed a lot, I had a lot of trouble with it this year in locating it. Some days it’s on, some days it will be off. But this summer, I definitely feel like I’ve been consistent and a lot better than I was. So that’s great for me, developing offspeed pitches.”

Kalani, a three-sport standout at Lowville, who captained the football, basketball and baseball teams there in his senior season, hoped to play football at St. Lawrence as well. But he suffered a knee injury, tearing the meniscus in his left knee, during the Saints’ preseason camp in August 2017.

He underwent successful surgery that November and “I was probably moving and running by April or May up at the school,” he said.

But this prevented him from playing baseball at St. Lawrence in his freshman season last year.

“Getting in strength and mobility and jumping, athletic things like that, it takes a while,” Zehr said after the surgery. “Then this past summer, I decided I wanted to pitch, and so I pitched over the summer, worked at it and I tried out for the team.”

While he likely won’t play football again, he considers baseball his favorite of the three sports.

Zehr is thankful that Wood has been accommodating in working around Zehr’s schedule for his day job.

“It’s awesome, he’s so lenient with me,” Zehr said. “I’ll tell him, ‘I can’t make it tonight, but when do you need me to throw again and I’ll try and get off work.’ So he’s really flexible with my schedule and knows I’m busy working, trying to make some money over the summer and still trying to get better.”