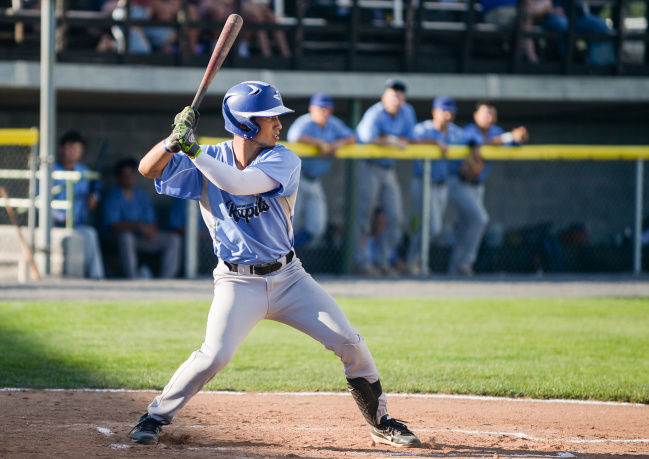 Watertown’s Emil Matti looks for a pitch to hit against the Elmira Pioneers on Thursday at the Watertown Fairgrounds. DAYTONA NILES/WATERTOWN DAILY TIMES 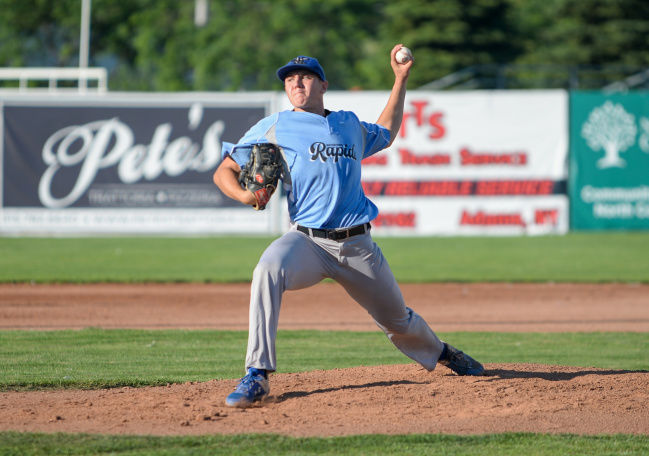 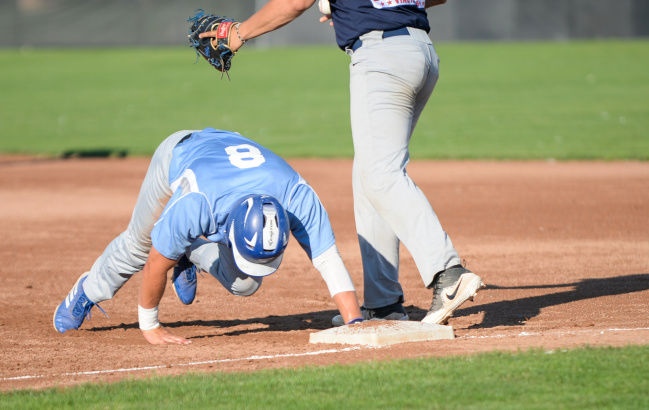 Watertown’s Vinny DeRubeis heads back to first base in front of Elmira’s Trae Harmon on Thursday at the Watertown Fairgrounds. DAYTONA NILES/WATERTOWN DAILY TIMES

Watertown’s Emil Matti looks for a pitch to hit against the Elmira Pioneers on Thursday at the Watertown Fairgrounds. DAYTONA NILES/WATERTOWN DAILY TIMES

Watertown’s Vinny DeRubeis heads back to first base in front of Elmira’s Trae Harmon on Thursday at the Watertown Fairgrounds. DAYTONA NILES/WATERTOWN DAILY TIMES

WATERTOWN — After three days off, this was the way Drew Mead and his Watertown Rapids teammates wanted to start the stretch drive of their season.

Mead threw five solid innings to earn the win and was backed offensively as the Rapids downed the Elmira Pioneers for a 9-4 victory Thursday night in a Perfect Game Collegiate Baseball League game at the Alex T. Duffy Fairgrounds.

“It feels great,” said Mead, a Pennsylvania native who attends Marymount (Pa.) University. “We have a hard time winning at home, so it was nice to finally get one.”

The left-hander allowed three runs in recording a team-leading fifth win of the season out of seven decisions for Watertown (14-19), which is battling for a playoff spot in the league’s West Division.

“Drew’s been great for us, he’s been our No. 1 guy since day one,” Watertown coach Mike Wood said. “So we knew we needed a big game out of him tonight and he did really well.”

Center fielder Emil Matti (Wagner College) doubled, singled twice and drove in two runs to lead the Rapids, who have now won two of their past three games.

“It’s the homestretch right now, so it’s the time to get hot,” Matti said.

“It is nice, it’s like the start of a second season almost after the All-Star break,” Wood said. “So the guys are kind of rejuvenated, they showed it tonight — they were ready and they played pretty well.”

Left fielder Vinny DeRubeis (Bridgeport) and catcher Khale Showers (Northwood University) each collected a pair of hits and both drove in two runs for Watertown, which also posted a rare home win.

The Rapids, who have 13 games left in the regular season, maintained their hold on third place in the West.

Watertown, which trails second-place Geneva by six games in the standings, leads fourth-place Adirondack by one game and now leads last-place Elmira and Newark by 2 1/2 games.

“Especially after the All-Star break, just getting a mental reset,” Mead said. “And just coming back and hopefully getting more of these wins and maybe make the playoffs.”

“Honestly, we haven’t been winning too much at home, so I think this will be a good start for us,” DeRubeis said.

The Rapids will play three games in the next two days against the Trail Blazers, starting with a doubleheader at Adirondack at 5 tonight and will host Adirondack at 7:15 p.m. Saturday.

Against Elmira, each Rapids player scored a run as the team recorded its fifth home win of the season.

“Hopefully this is a good sign of things to come,” Wood said.

The Rapids struck for two runs in each of the first two innings as they snapped a five-game losing skid against the Pioneers.

In the first, Derek Kasperzyk walked and scored on Matti’s double down the left-field line and Matti came home on DeRubeis’ single to left.

“He’s been playing well for us,” DeRubeis said of Matti. “I joke with him, I feel like if really we need one, he always gets a hit, because he always comes up big for us.”

After loading the bases to open the second inning, Kasperzyk hit an RBI flyout to left, and Matti followed with a run-scoring single to center for a 4-0 lead.

“When we put up runs early, our pitchers pitch with confidence,” Matti said. “It’s all comfortable from there.”

Elmira scored three times in the fourth to pull within a run, but Watertown put the game away with a five-run seventh.

After the Pioneers left the bases loaded in the top of the inning, the first four Rapids reached base. James Krick walked and scored on DeRubeis’ long single off the left-field wall. Michael Rounds, who had singled, came home on Danny DiMarzo’s sacrifice fly to deep center for a 6-3 lead.

Mead scattered seven hits, struck out three and walked only one in his team-high seventh start of the season.

“I felt good,” Mead said of his night. “I felt like my stuff was there the whole entire time today, definitely painting the outside corner a lot. Just competing and throwing strikes and good quality pitches.”

Spencer Vainavich pitched a scoreless sixth and seventh for Watertown, as did Marc Maestri in the eighth, and team closer Kenny Sysyn, who played in the league All-Star game along with Kasperzyk, allowed a run in the ninth, but finished off the win.

“I like it up here, I really do,” Mead added. “I’m a big outdoors guy and I love the lake and different parks and stuff around here, it’s really, really beautiful.”

Jeff Mejia and Trae Harmon each singled twice to pace Elmira (12-22), which has lost seven of its past eight games.

“I think if we can finish this week off strong with like three or four more wins, I think we’ll be in a good spot,” said DeRubeis, who competed in the league’s home run derby, hitting seven homers in the first round.

n NOTES: Watertown is now 5-11 in home games this season, including 2-4 in July. ... The Rapids have five home games remaining in the regular season. ... Watertown, which is 9-8 on the road, also have road doubleheaders at Mohawk Valley on July 28 and at Geneva on July 31 on the final day of the regular season. ... The top four teams in each division will qualify for the playoffs, with a pair of one-game playoffs in the first round in both divisions.