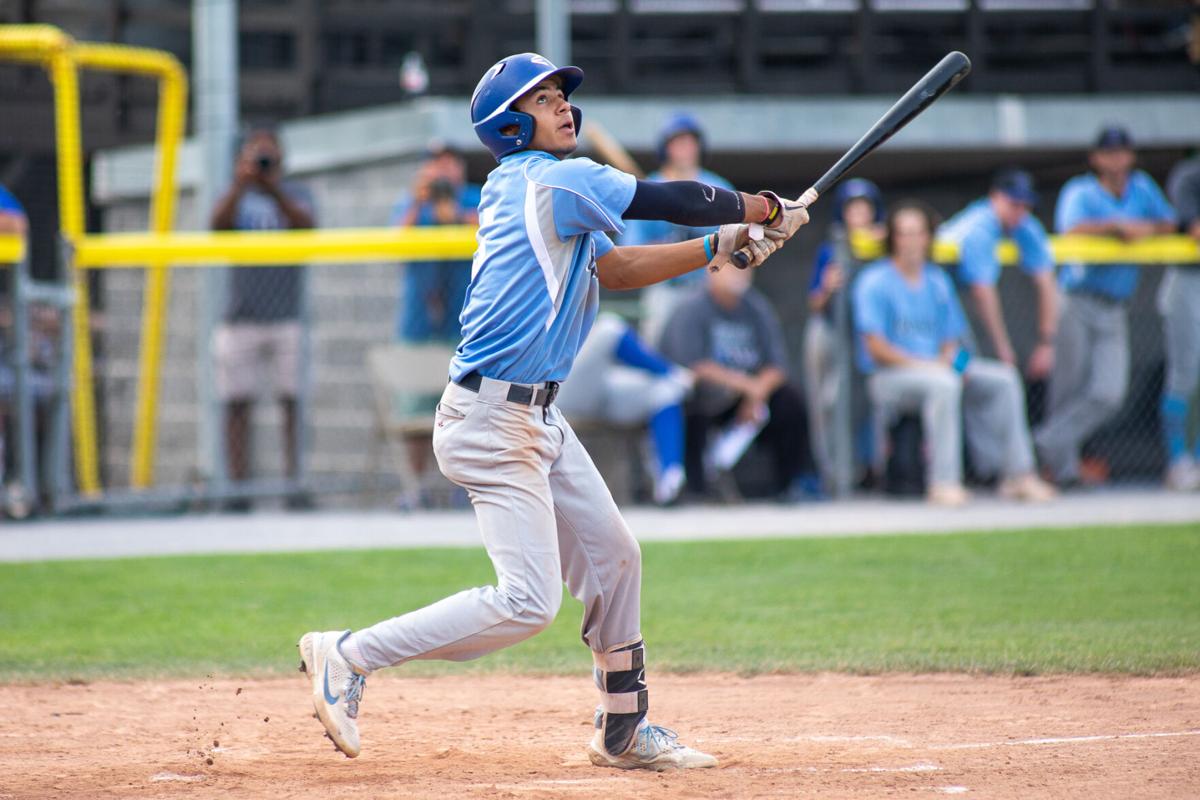 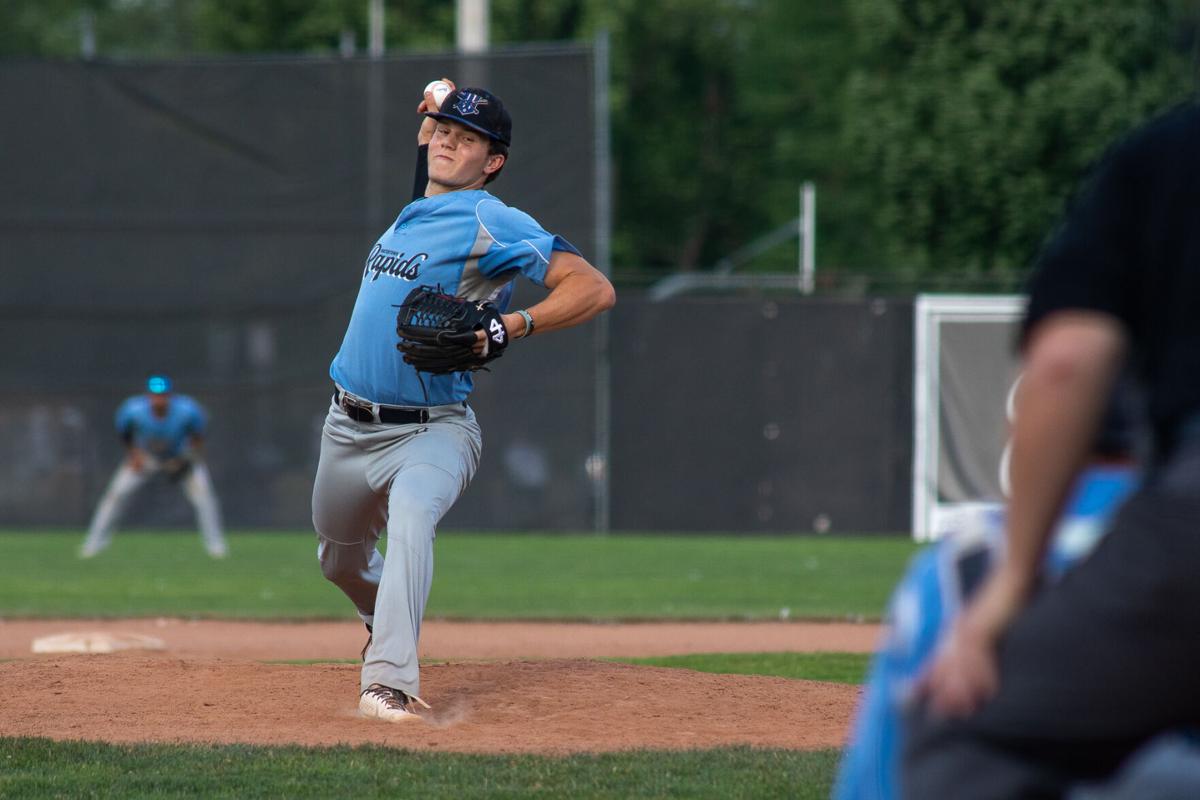 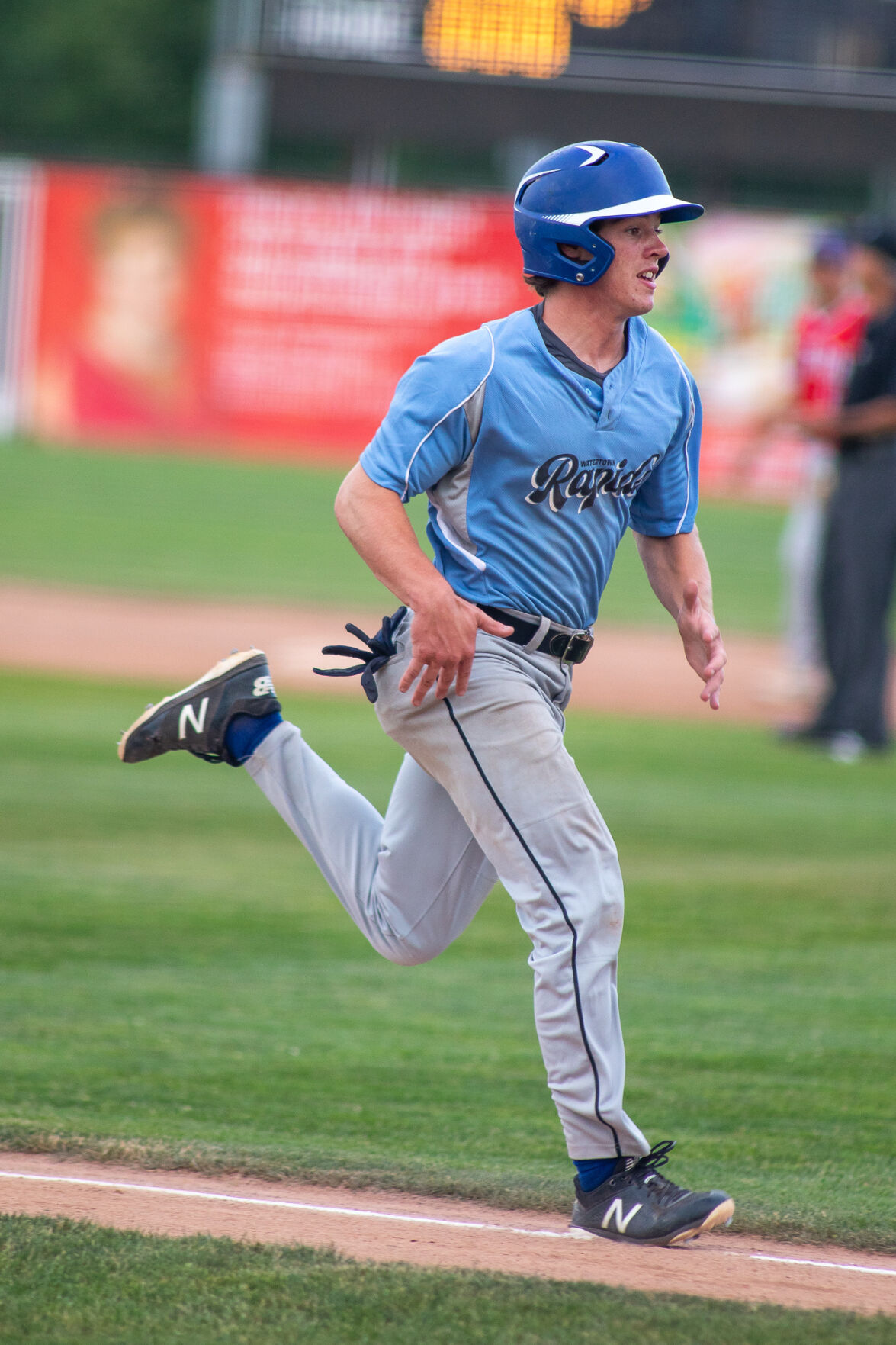 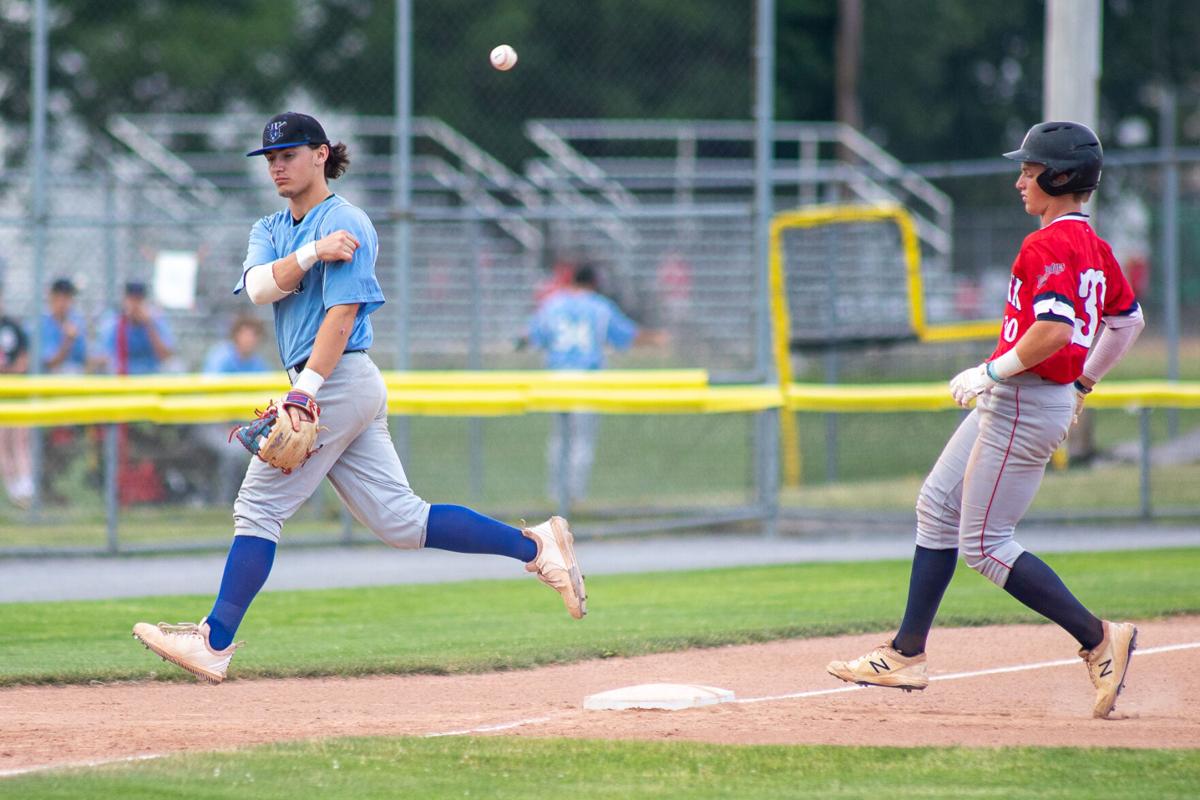 The Rapids’ Matt Tobin flips the ball after making the third out during Wednesday’s game against the Doubledays at the Alex T. Duffy Fairgrounds. Kara Dry/Watertown Daily Times 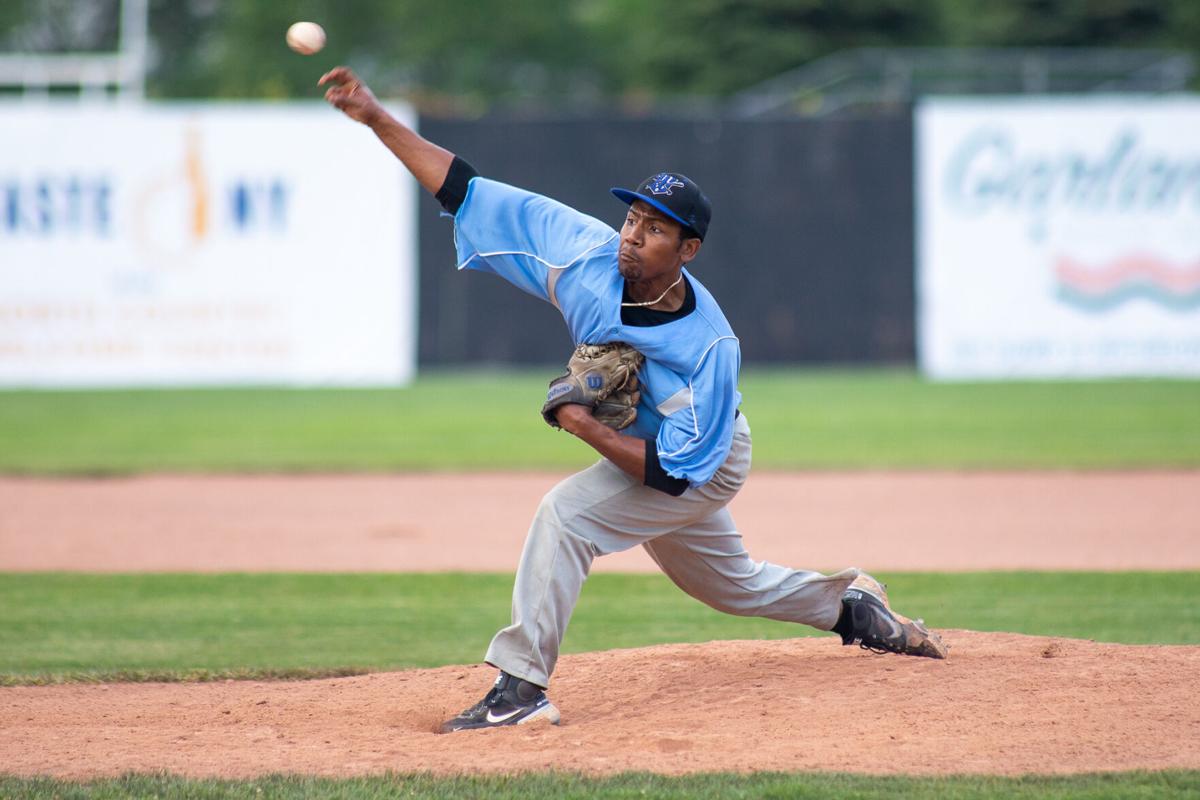 The Rapids’ Jon Sylvester throws a pitch in Wednesday against the Doubledays at the Alex T. Duffy Fairgrounds. Kara Dry/Watertown Daily Times 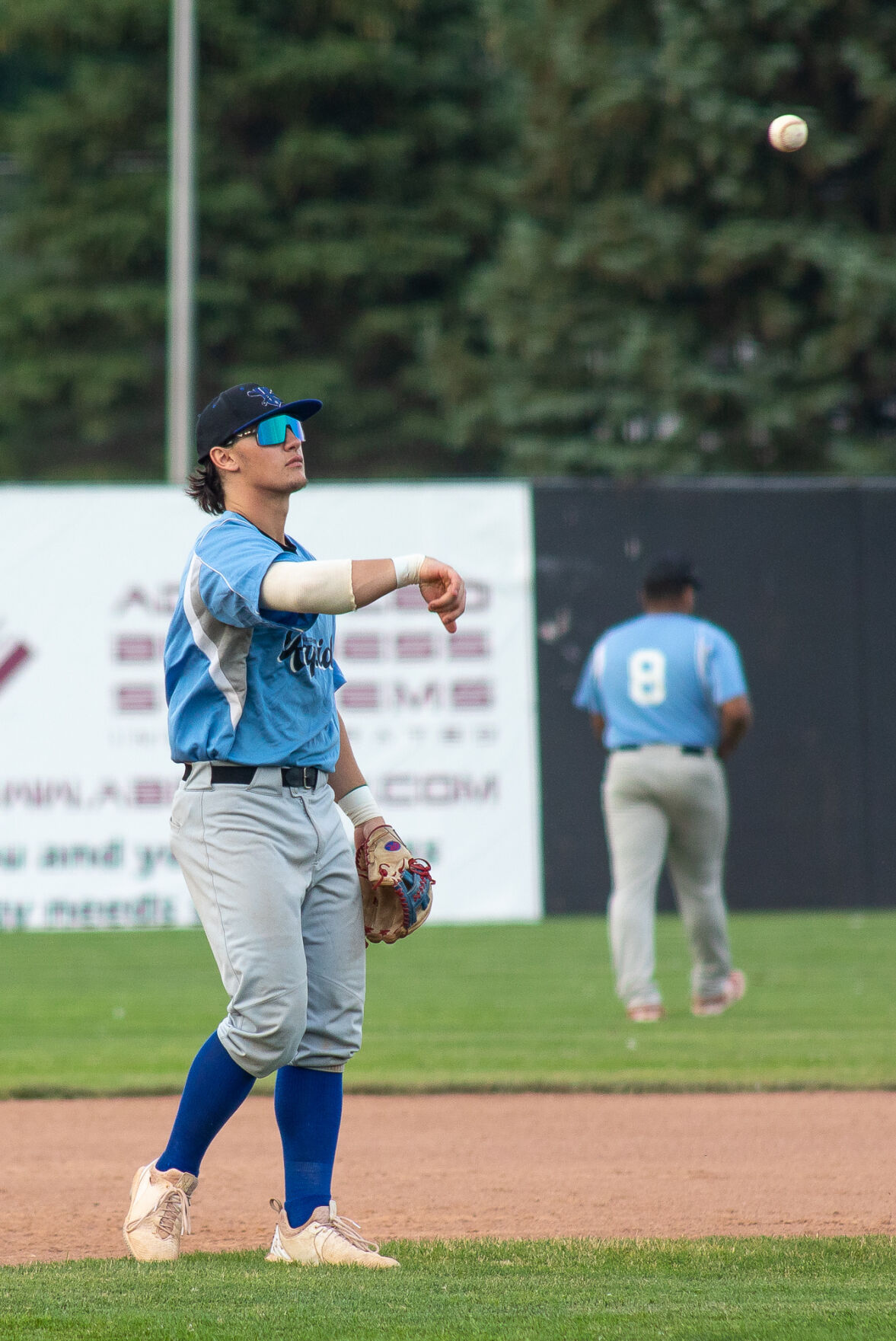 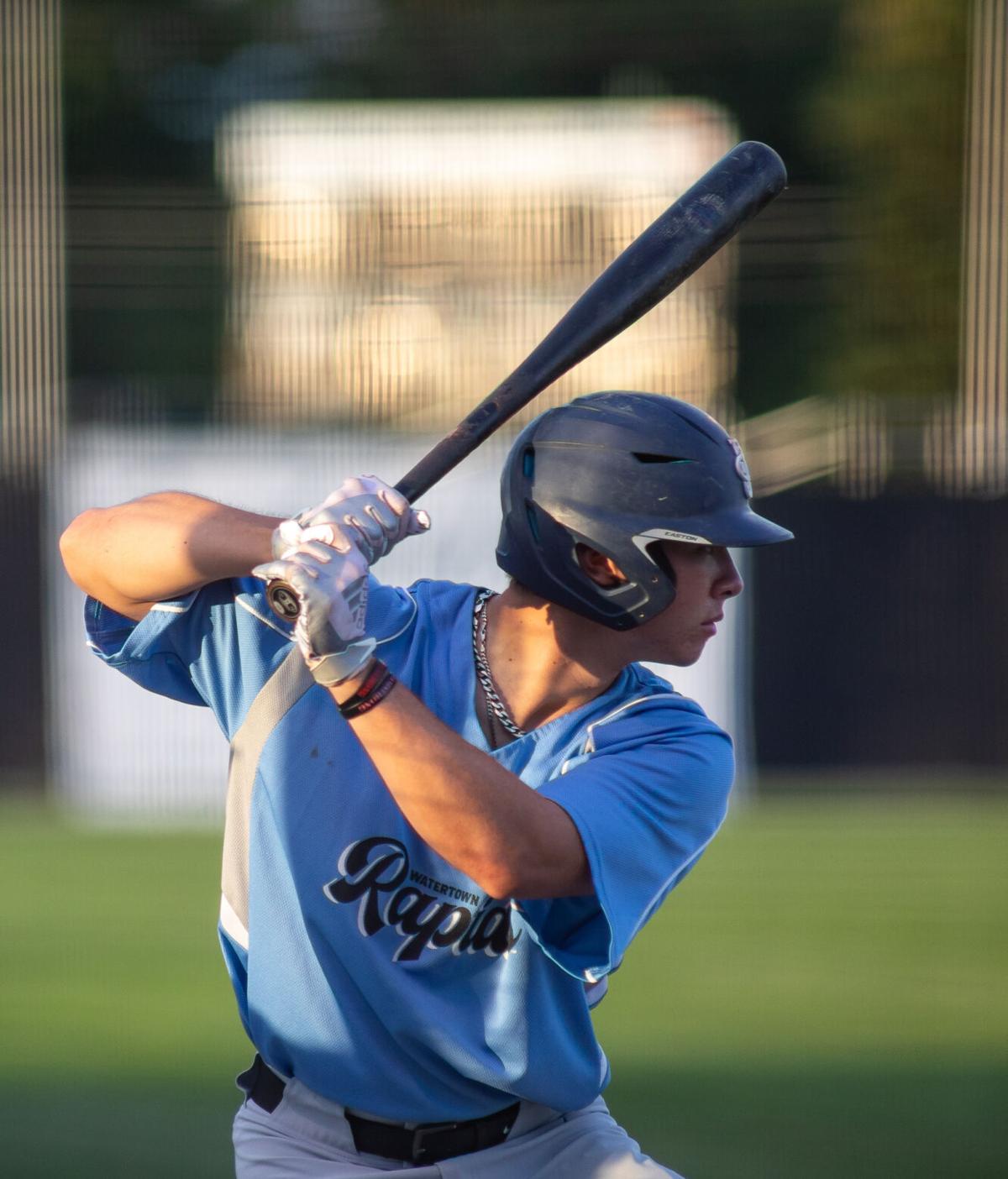 The Rapids’ Thomas McCaffery swings on deck during Wednesday’s game against the Doubledays at the Alex T. Duffy Fairgrounds. Kara Dry/Watertown Daily Times

The Rapids’ Matt Tobin flips the ball after making the third out during Wednesday’s game against the Doubledays at the Alex T. Duffy Fairgrounds. Kara Dry/Watertown Daily Times

The Rapids’ Jon Sylvester throws a pitch in Wednesday against the Doubledays at the Alex T. Duffy Fairgrounds. Kara Dry/Watertown Daily Times

The Rapids’ Thomas McCaffery swings on deck during Wednesday’s game against the Doubledays at the Alex T. Duffy Fairgrounds. Kara Dry/Watertown Daily Times

WATERTOWN — With the calendar turning to July today, the dog days of summer have already arrived for the Watertown Rapids.

Ryan Peters and the Rapids were hit hard again by Auburn on Wednesday night as the Doubledays rolled to a 12-4 victory in a Perfect Game Collegiate Baseball League game before a crowd of 200 at the Alex T. Duffy Fairgrounds.

With the setback, Watertown (7-15) has lost a season-high seven games in a row, with three of those losses coming against Auburn (13-9).

“It’s tough because guys start to get hurt and then guys start to leave, you kind of just keep going down that same rabbit hole and you never come out of it because the off-day hasn’t come,” Watertown coach Ben Moxley said. “It’s tough, we’re down to I think 11 pitchers, which is by far the lowest in the league. Guys have innings limits, guys have college coaches calling them back for whatever reason, so it happens, but it really hit us at a tough time.”

Peters, a Watertown native, allowed nine runs on 12 hits in just three innings of work in taking the loss.

“We swung the bat really well tonight,” Auburn manager Ben Julian said. “Anytime you see a pitcher more than once, you start to get a feel for him. And I think we had good approaches to the plate and the ball fell for us at times, the wind blew out a little bit and that helped.”

All four of Peters’ decisions this season have come against Auburn, as he slipped to 1-3 on the campaign.

“He was just missing a little with his fastball,” Moxley said of Peters. “He tried to start mixing it up and then they started not hitting it as hard, but everything was still falling. Just nothing seemed to go his way, it’s tough when you get behind that early.”

The Rapids’ fortunes on the night went from bad to worse when David Stripe, usually an infielder, was hurt while pitching in the top of the ninth inning. The umpires then mercifully called the game with no outs after Stripe allowed a lead-off triple.

For the game, the Doubledays generated 18 hits and have now won four of the six meetings between the two teams this season.

“We’ve just to get better and hopefully find a way to win,” Rapids’ left fielder Hazel Martinez said. “We’ve just got to stay positive and get through it.”

Everyone in Auburn’s lineup totaled at least one hit, led by Matt Livingston, who doubled twice and singled, Griffin O’Ferrall reached four times, including three singles, and Logan Matson homered and singled.

The Rapids started the game on a positive note as they turned a double play in the first inning. But the Doubledays seized a 3-0 lead in the second as Tyler Attal hit an RBI ground-rule double, and after a run-scoring sacrifice fly, Genki LeClair hit an RBI single.

“He does a good job, he throws strikes and commands the zone,” Julian said of Peters. “But if you see someone enough times, you start to swing at your pitches as opposed to his.”

Auburn followed this up by plating six runs in the third as the first six batters reached via hits — sparked by Matson’s home run over the left-field wall on Peters’ first pitch.

After Livingston’s two-run double, Pierce Hendershot doubled in a run for a 7-0 lead and Attal and LeClair followed with RBI singles.

Doubledays starter Chris Auclair allowed one run on five hits in four innings to record the win, while reliever Mitsuki Shimonishi kept the Rapids at bay by allowing three runs in three innings of work before Carson Ashby pitched the eighth.

Tony Santa Maria collected two hits and drove in two runs to pace the Rapids and Frank Wayman and Jordan Dissin each doubled.

“It’s kind of like a rough stretch, we’re in last place right now,” said Martinez, who singled twice and knocked in a run. “But hopefully we can win some to get back into it.”

Despite his team’s slump, Moxley has been encouraged by his team’s fight in recent days as the Rapids rallied to tie the score in a 6-3 loss at Mohawk Valley on Tuesday and scored six runs in the late innings in a 7-6 setback at Utica on Monday. Watertown also came back to force extra innings at home against Mohawk Valley on Sunday, only to fall, 14-10.

“Our guys have been fighting, obviously tonight when you get down 10-1, you don’t really expect to win,” Moxley said. “But we’ve been fighting, we’ve been down the last three nights and then came back and tied it going into the ninth all three times, it just hasn’t fallen our way in the end.

“They’re fighting, they’re trying, it’s just tough when you don’t have enough pitchers to be able to do what you want to do.”

Watertown, which sits in last place in the division, is now two games away from reaching the midway point of its season.

The Rapids and Doubledays will meet again at 7:05 p.m. today in Auburn, which occupies second-place in the Central Division behind Utica.

will host Utica at 6:30 p.m. on Friday at the Fairgrounds before playing at Utica on Saturday.

“The mood is to just play hard and just try and win every game from now on,” Martinez said.