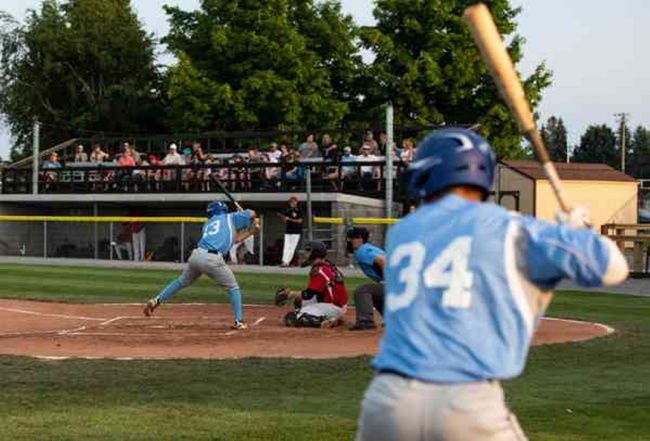 Jonathan Catapano, left, of the Watertown Rapids prepares to hit the ball at the plate while teammate Tony Socci stands on the on-deck circle during a game against the Adirondack Trail Blazers on July 27 at the Alex T. Duffy Fairgrounds in Watertown. Sydney Schaefer/Watertown Daily Times 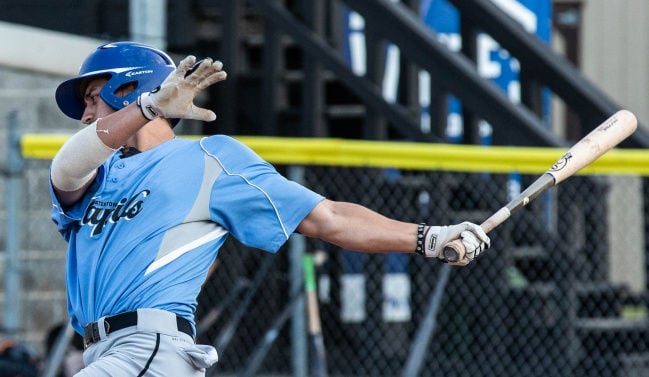 Watertown Rapids’s Tony Socci follows through on a swing during a game July 25 at the Alex T. Duffy Fairgrounds. Sydney Schaefer/Watertown Daily Times 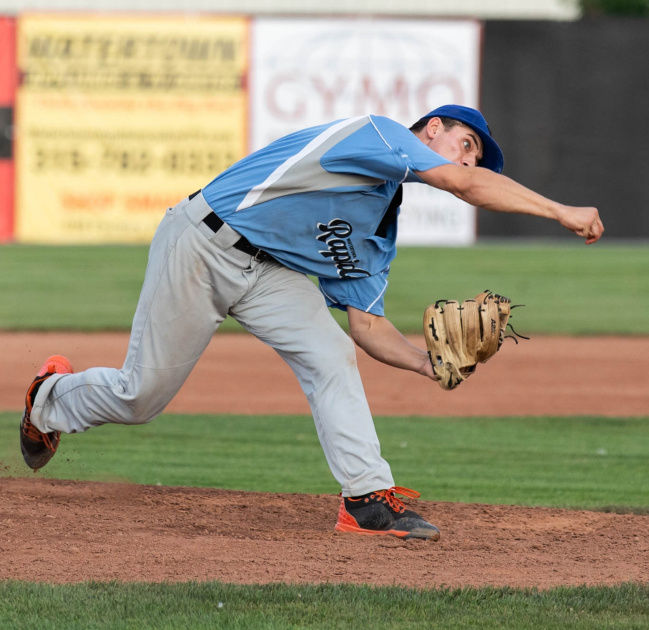 Jonathan Catapano, left, of the Watertown Rapids prepares to hit the ball at the plate while teammate Tony Socci stands on the on-deck circle during a game against the Adirondack Trail Blazers on July 27 at the Alex T. Duffy Fairgrounds in Watertown. Sydney Schaefer/Watertown Daily Times

Watertown Rapids’s Tony Socci follows through on a swing during a game July 25 at the Alex T. Duffy Fairgrounds. Sydney Schaefer/Watertown Daily Times

WATERTOWN — In the franchise’s second season, the Watertown Rapids couldn’t quite duplicate or better what the team accomplished last summer on the diamond.

While team management made strides in delivering more of an overall fan experience this year, the team’s performance on the field wasn’t enough to make the playoffs.

“Absolutely it’s disappointing,” first-year Watertown coach Mike Wood said. “We want to make the playoffs and we wanted to make a deep run in the playoffs, and I thought we had the team.”

With six games left in the regular season, the Rapids stood only one-half game out of playoff position in the league, after winning at Elmira, a team they were chasing, last Friday.

Yet Watertown would not win another game — starting with a 10-8 home loss to Adirondack last Saturday — and finishing the season on a six-game losing skid, and finishing in last place in the league’s West Division.

“The last week, we’ve given it our all and given as much fight as we could,” Rapids outfielder and infielder Derek Kasperzyk said. “But finishing where we did, it’s still disappointing.”

“We gelled a ton as a team and we’re all basically like best friends,” said Watertown outfielder Jonathan Catapano, a Rochester native who attends Grand Valley State. “We lived with each other up at the dorms. We definitely had a lot of fun as a team, a lot of really great kids, a lot of great ballplayers. Our record didn’t really show how well we gelled, but it was definitely a great time.”

The Rapids started their season strong and generated a 7-3 start, as they sat in first place in the division on June 14.

But from that point on, they couldn’t keep up the momentum and struggled the rest of the way by winning only nine games for the remainder of the season, finishing at 16-30.

“We got off to the hot start, and we lost two or three arms like right in the middle of the season,” Rapids outfielder Vinny DeRubeis (University of Bridgeport) said. “And that was something that we struggled with a little bit with the pitching. Other than that, we had good group of guys, a great season to be a part of.”

Watertown also won only six of 25 games played in July, including losing nine of its last 10 games, which helped seal its fate this season.

“Our record didn’t quite end up to be what we hoped, but this league is very competitive and I was proud of how our team competed and handled themselves,” Rapids general manager Brandon Noble said.

Last year, collegiate baseball returned to Watertown after a three-year absence and the Rapids made the playoffs in their inaugural season.

After winning at Mohawk Valley in a one-game playoff, the Rapids, who won 26 games and finished second in the then Central Division, were defeated by Amsterdam in two games in a semifinal series.

This year, with an entirely new roster, which is not uncommon in collegiate summer baseball, the Rapids simply couldn’t find their stride on a daily basis.

“We lost a few guys along the way, with innings caps and stuff like that, family issues, injuries, so that’s to going hurt,” Wood explained. “And when that happens, you have to suck it up and keep fighting, and we did.”

To compound matters, Watertown also struggled at home, faring 6-15 in games this year at the Alex T. Duffy Fairgrounds.

The Rapids had a slightly better road record at 10-13 as overall, they finished only percentage points behind fifth-place Newark in the division.

“We were trying to find that consistency, we were up and down all year,” Wood said.

Watertown struggled to find that successful balance as a team, both on the mound and at the plate.

“It’s been tough where we’ll go through little swings where we hit really well or we’ll pitch really well during parts of games,” Kasperzyk said.

As a team, Watertown ranked seventh in earned-run average (5.34) and led the league in complete games (four) and tied for the league lead in shutouts (three).

Offensively in the league, the Rapids finished second in stolen bases (103) and tied for fourth in home runs (24) with Utica, but wound up eighth in batting average (.258) and next to last in RBIs (197).

The Rapids were aggressive throughout the season on the base paths as Kasperzyk led the Rapids in stolen bases (24), also finishing second in the league in this category, with teammate Drake Smith (Winthrop) also in the top 10 with 19.

“Like I said, sometimes there would be days when the pitching wasn’t there for us and we would be giving up some runs,” DeRubeis said. “But our offense would always come back with it. This team had a lot of fight, we never gave up.”

This was the first head coaching job for Wood, a Seneca Falls native, who played at Jefferson Community College before moving on to the Division II level and is currently an assistant coach at St. Lawrence University.

“It was definitely a learning experience for me,” Wood said. “I was really excited, I had a lot of fun as well. I learned a lot, it was productive for me and I had a pretty good group of guys to be around for the summer months.”

One night in particular seemed to sum up the Rapids’ fortunes on July 6 against the Geneva Red Wings. The game at the Fairgrounds was held up early on for 24 minutes because of a lightning delay.

When the game resumed, Watertown led 8-2 lead in the top of the fifth inning, but with torrential rain suddenly falling, the game was called with two outs in the inning.

The Rapids came within an out of an official game and a win, only to be turned away. The next Saturday, the Geneva game was to be resumed and followed by a scheduled game in Watertown, but both games were postponed because of rain and eventually canceled.

Yet for all of Watertown’s eight rainouts during the season, including four home games, those two games against Geneva were the only two which weren’t made up.

The Rapids’ attendance at the Alex T. Duffy Fairgrounds at times was encouraging compared with their first season in the league. For most home games, they drew crowds totaling between 100 and 200.

“Our overall attendance was a bit down from last season,” said Noble, who is in his second year as the team’s general manager. “We were encouraged by the various groups who came out in the new areas, but the walkup was a bit down.”

They drew a season-high 800 fans on June 1 in their home opener against Mohawk Valley, which was followed with the team’s first postgame fireworks display of the year.

“I thought we saw some great improvements from the first season,” Noble said. “Our new group areas were a big hit and we were able to attract new people to our games through those areas. I thought our concessions were very efficient and improved from last year as well, which helps with the overall fan experience.”

The next three largest crowds for Watertown came over the last three weeks of the season, 521 on July 27, also a fireworks night; 401 last Tuesday in the home finale and fan appreciation night; and 335 on July 25.

“We were also encouraged by the uptick in attendance in the last couple of games,” Noble added.

Players like Kasperzyk, joined the team several weeks into the season after he helped lead Quinnipiac to the Division I College World Series.

“The biggest part of summer ball is to trying to work on things, and get better individually and stuff like that,” Kasperzyk said. “We were such a close team and I met a lot of good kids who going to be my friends for a long time, long past the baseball part of our lives.”

The summer also provided some players to broaden their horizons on the field.

“I was happy with my season,” DeRubeis said. “I got to play a little bit of outfield, normally I’m a first baseman, so that’s good experience that I got. So, I enjoyed this summer a lot.”