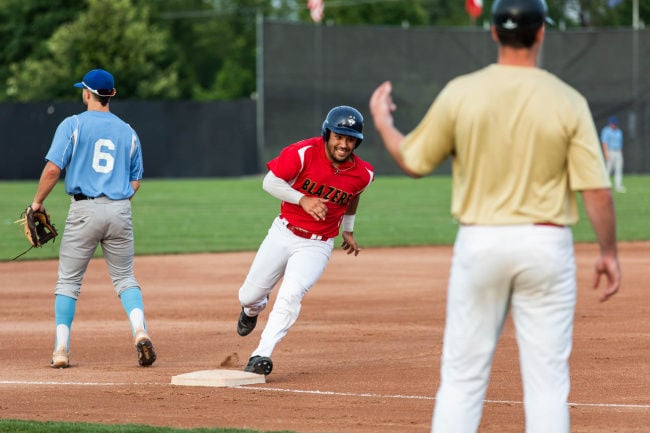 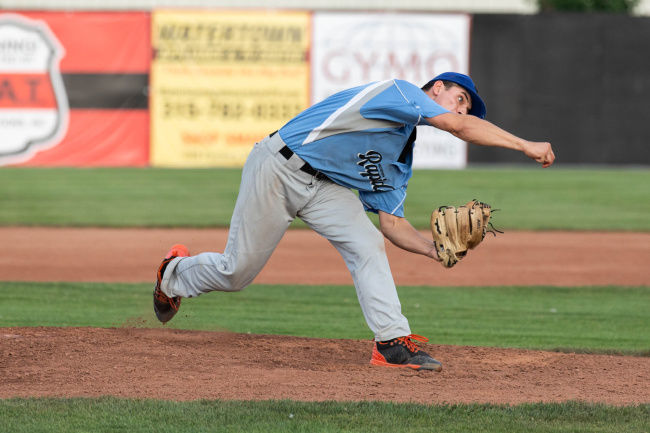 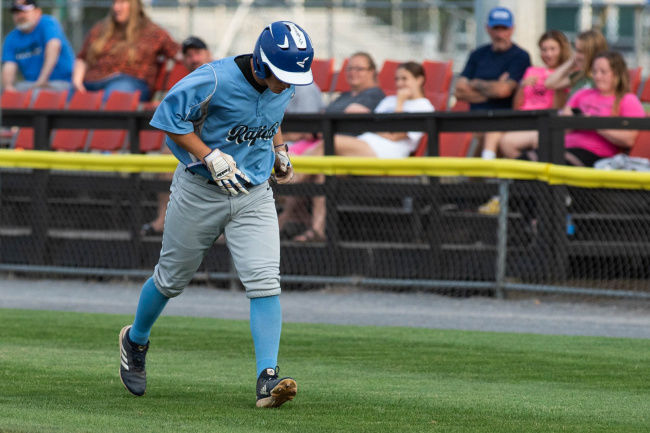 The Watertown Rapids’ Jonathan Catapano puts his head down as he walks back to the dugout after his fly ball was caught at the Alex T. Duffy Fairgrounds in Watertown. Sydney Schaefer/Watertown Daily Times 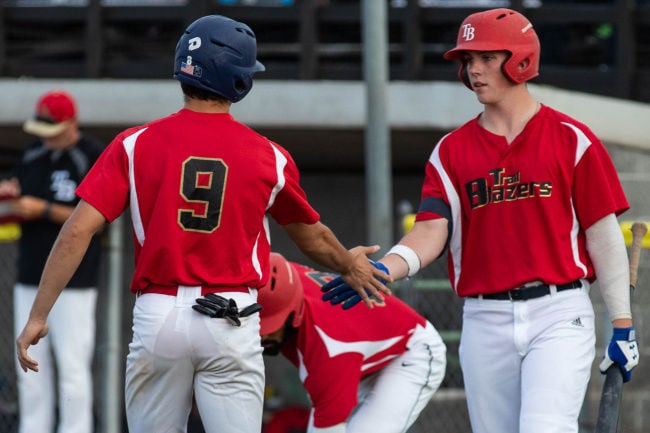 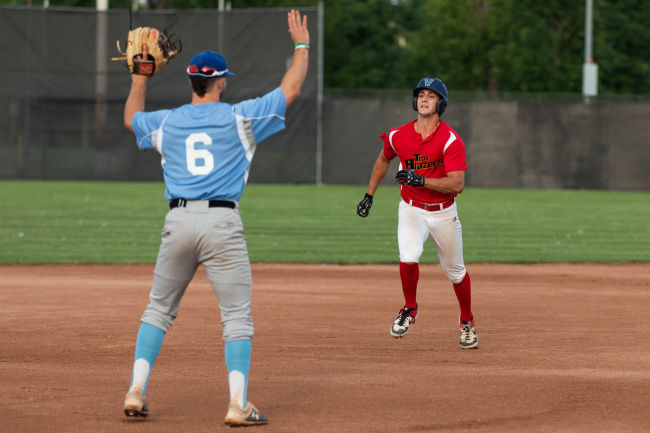 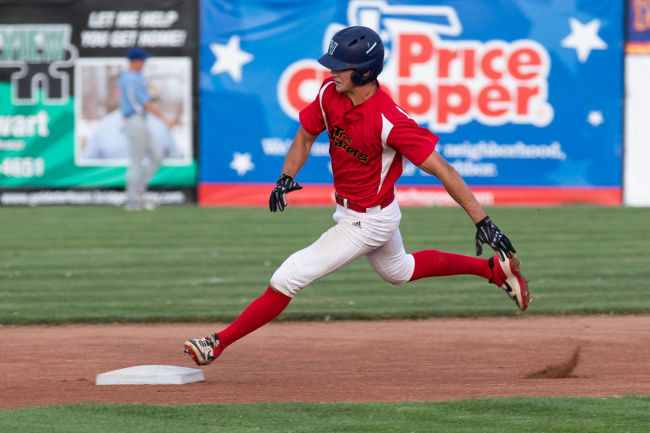 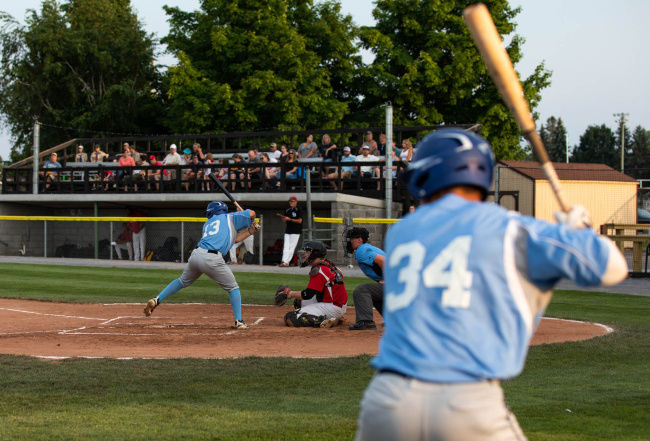 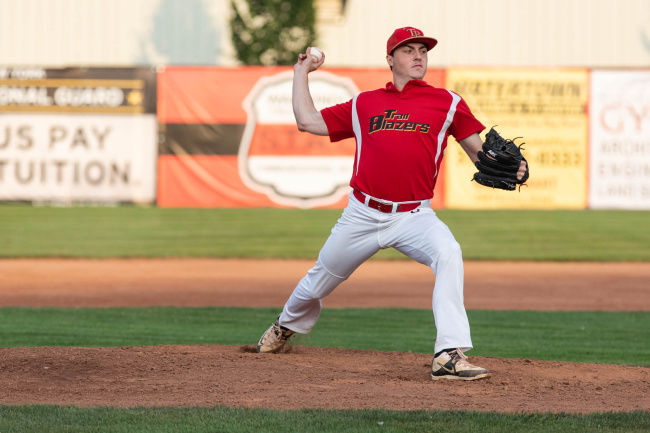 The Watertown Rapids’ Jonathan Catapano puts his head down as he walks back to the dugout after his fly ball was caught at the Alex T. Duffy Fairgrounds in Watertown. Sydney Schaefer/Watertown Daily Times

WATERTOWN — Despite a late comeback attempt, the Rapids never overcome the 10 runs that Adirondack scored in Saturday’s divisional Perfect Game Collegiate Baseball League game, leading to a 10-8 final before 521 fans at the Alex T. Duffy Fairgrounds.

Watertown starter Josh Lajoie persevered for 5 1/3 innings, allowing nine runs on nine hits. The top of the first proved to be the worst part of his outing. Chris Rotundo and Kevin Ferrer had back-to-back extra-base hits followed by a walk and a couple of singles. By the time the Rapids jogged off the field and prepared to bat, eight batters came to the plate and four scored.

Lajoie was steadier following his rocky start, he gave up a total of five runs across his next 4 1/3 innings.

Having coached at the college level for a few years now, this isn’t the first time Wood has seen a pitcher struggle adapting to college ball.

Struggling to put batters away hurt Lajoie in his final inning when, again, Rotundo and Ferrer recorded hits when each were faced with two strikes.

Usually the soon-to-be St. John’s University freshman aims for the strikeout but had only one.

“I think it was just getting ahead, you have to get ahead,” Lajoie said. “If you’re falling behind, these guys are going to make you pay when they get a pitch they want.”

Lajoie’s offense failed to give the starter much support. Against Adirondack starter Steven Miller, the Rapids managed only one run on four hits. However, they fared much better against the bullpen, scoring seven runs on five hits including two home runs, one by Danny DiMarzo and the other by Mike Rounds.

With a little bit more luck the Rapids would have had a few more hits and possibly a few more runs. Some balls were hit hard but right at an Adirondack defender.

“My second at-bat I lined out to the right fielder and it felt like I was right on it, that’s baseball, some are going to fall and some are going to get caught, that happens,” DiMarzo said. “I was seeing the ball well today, and in my third at- bat, I was able to catch one so it felt good.”

When the Rapids struggled to score early on, they became aggressive on the base paths. Derek Kasperzyk hustled to third base on a ball hit to left center, diving into the bag to beat the incoming throw. He later scored a couple batters later on a botched pickoff throw to first.

A few innings later, Drake Smith tried his hand at manufacturing a run with his legs. After a double and a sac bunt got him over to third in the fifth, Smith danced along the third-base line, drawing the pitcher’s attention more than once.

The effort was all for nought, Jonathan Catapano struck out swinging.

“Aside from the two home runs we hit tonight, we are a home run hitting team, I think we can also be scrappy,” Wood said. “We’re versatile where we can be scrappy and put the ball in play when we want to, and (get) an extra-base hit or an infield hit. We can do both, we have the lineup to do both.”

The loss makes Watertown’s playoff aspirations even more dire. With five regular-season games left, Watertown has no more meetings against the Pioneers.

“You just try to minimize all that and take it a pitch at a time,” Wood said. “But it is in the back of our minds, no doubt, trying to fight for that last spot.”

The Rapids will play two games today against Mohawk Valley in Little Falls. The Rapids’ final home game will be Tuesday at 6:15 p.m. against Utica, with the regular-season finale being a doubleheader at Geneva on Wednesday.