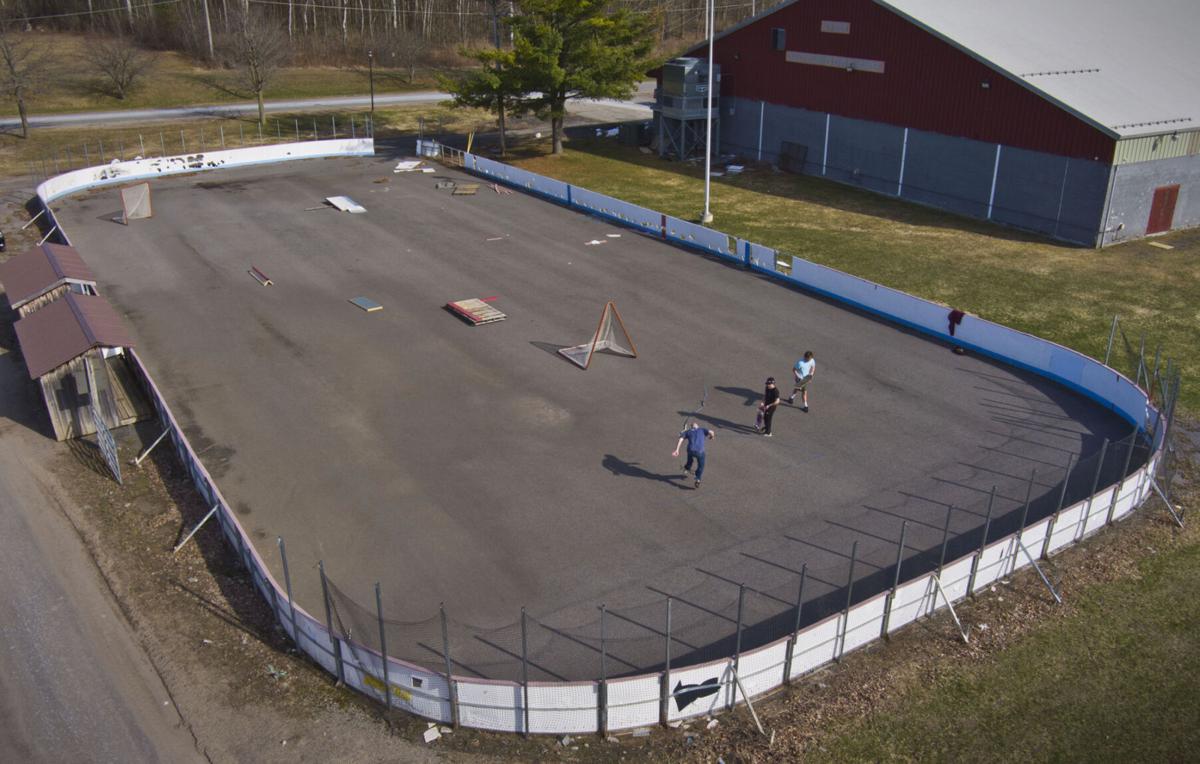 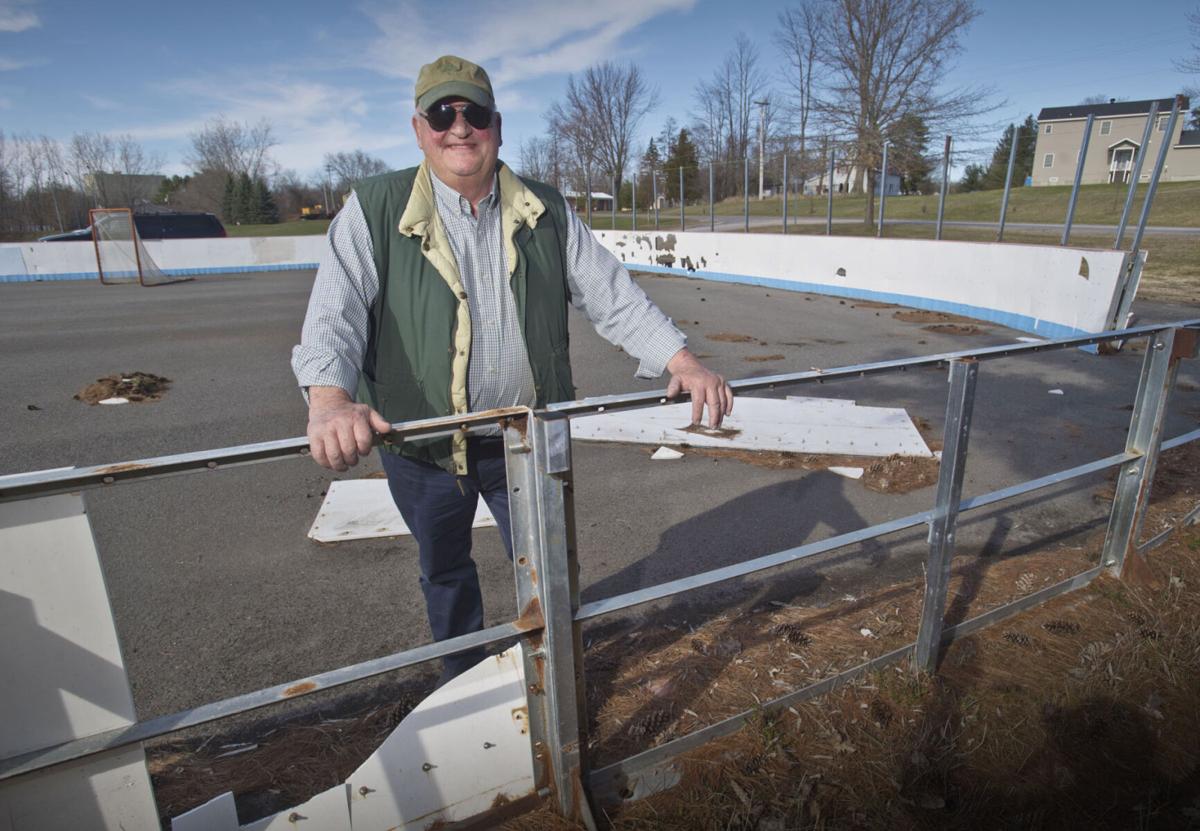 Timothy I. Abplanalp stands at the remains of a section of boards Tuesday at the Canton Pavilion outdoor rink. A community effort is under way to refurbish the rink as a multi-use space for ice hockey, roller skating, box lacrosse, skate boarding and basketball. Christopher Lenney/Watertown Daily Times 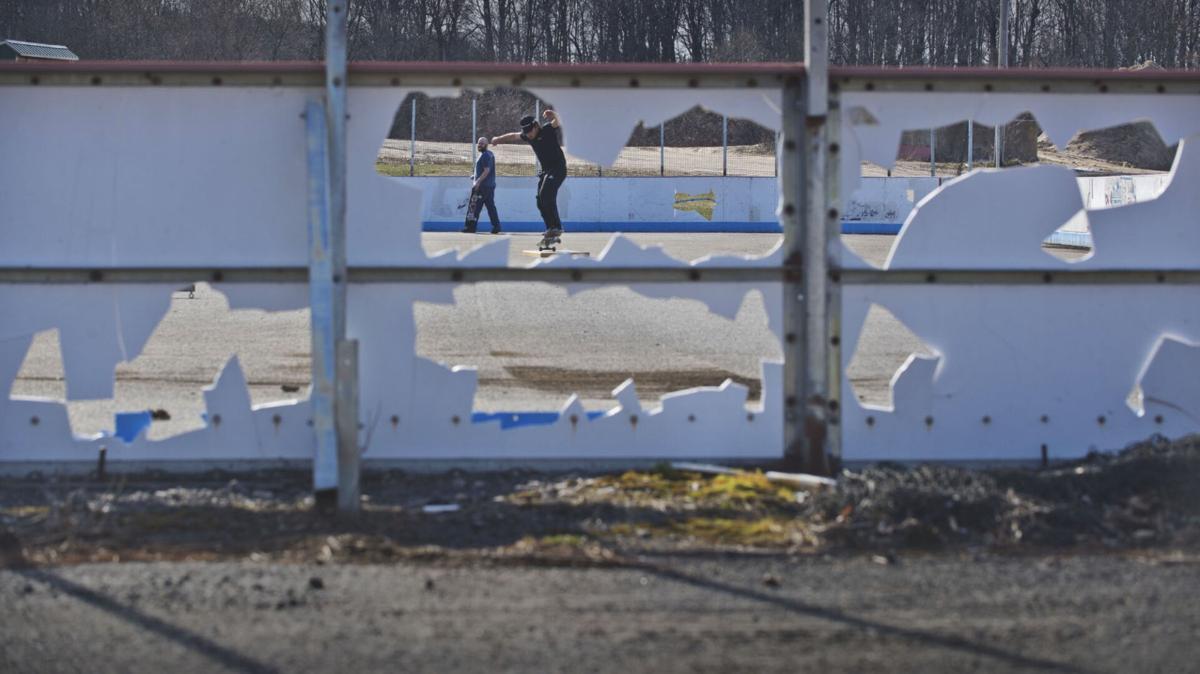 Skate boarders can be seen through holes in the boards at the Canton Pavilion outdoor rink Tuesday. Christopher Lenney/Watertown Daily Times

Timothy I. Abplanalp stands at the remains of a section of boards Tuesday at the Canton Pavilion outdoor rink. A community effort is under way to refurbish the rink as a multi-use space for ice hockey, roller skating, box lacrosse, skate boarding and basketball. Christopher Lenney/Watertown Daily Times

Skate boarders can be seen through holes in the boards at the Canton Pavilion outdoor rink Tuesday. Christopher Lenney/Watertown Daily Times

Adjacent to the Canton Recreation Pavilion on Lincoln Street, the rink has deteriorated into a safety hazard and an “eyesore,” resident Timothy I. Abplanalp said.

But a community-led revival is set to transform the space — with holes punctured through boards and steel posts protruding from joints — into an all-season rink for ice hockey, roller skating, skate boarding, box lacrosse and basketball.

“This all could use a facelift,” Mr. Abplanalp said Tuesday, walking the rink’s perimeter.

A proposed project headed by Mr. Abplanalp and several other community members is now in the works at an estimated $35,000, roughly half of which has already been raised through families and Canton Minor Hockey. A local donor, who wishes to remain anonymous, Mr. Abplanalp said, has pledged $20,000 in matching funds.

The rink is situated on village property near Bend in the River Park, and village officials during a special meeting last week approved the community-funded restoration effort.

The Reimagining Recreation initiative was launched in the fall and convened Canton’s recreation-loving public to evaluate municipal programming and facilities. The joint town and village Recreation Committee, with the public advisory group, developed recommendations and held a virtual forum in March to discuss a vision for Canton recreation.

Mr. Abplanalp was one of about two dozen advisory group members and expressed interest in renovating the outdoor rink, in need of new signs, a complete replacement of the indoor-use boards with outdoor boards and rehabbing of the oval’s steel framework.

Though no formal contracts or design plans are in place, Mr. Abplanalp said the rink’s proponents are planning to complete the project with volunteer labor and seek fundraising assistance from community groups and businesses. Ideally, he said, new boards would be set by winter this year. A standing group to facilitate continued fundraising and maintenance would then be established.

For now, the rink sees occasional visitors. A pair of St. Lawrence University students and a Canton resident spent Tuesday afternoon skateboarding on the tarmac.

“I was definitely curious about all the holes,” Seth W. Gray said.

With fellow first-year SLU student Daniel M. Edich, Mr. Gray first learned of the rink’s existence a few weeks ago. With spring blooming, they decided to take advantage of this week’s sunny weather, though they look forward to returning when the area is renewed.

“It’s so nice to still see people here,” Mr. Abplanalp said. “It does look like we’ve got a project ahead of us, it does.”

To get involved in the project, ask questions or make suggestions, contact Mr. Abplanalp at tim.apple47@gmail.com.