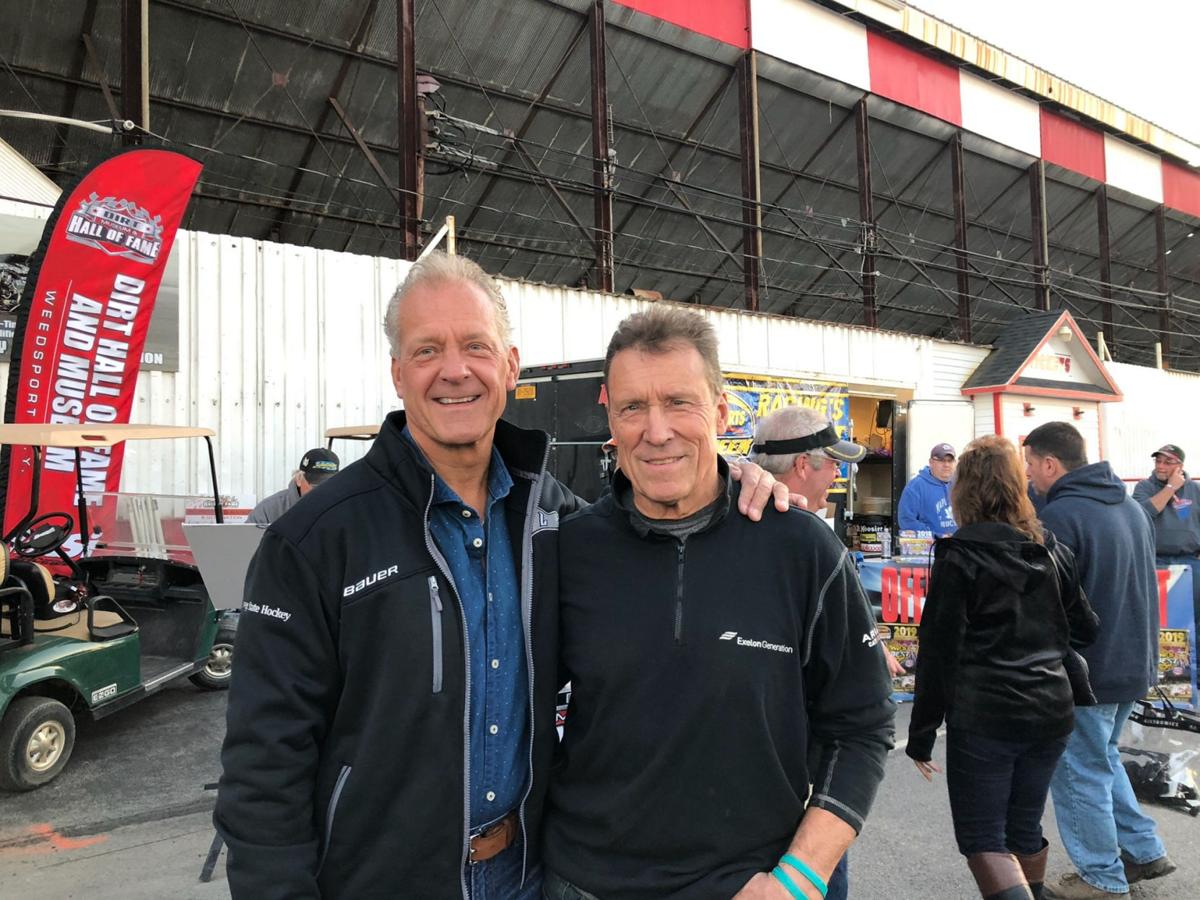 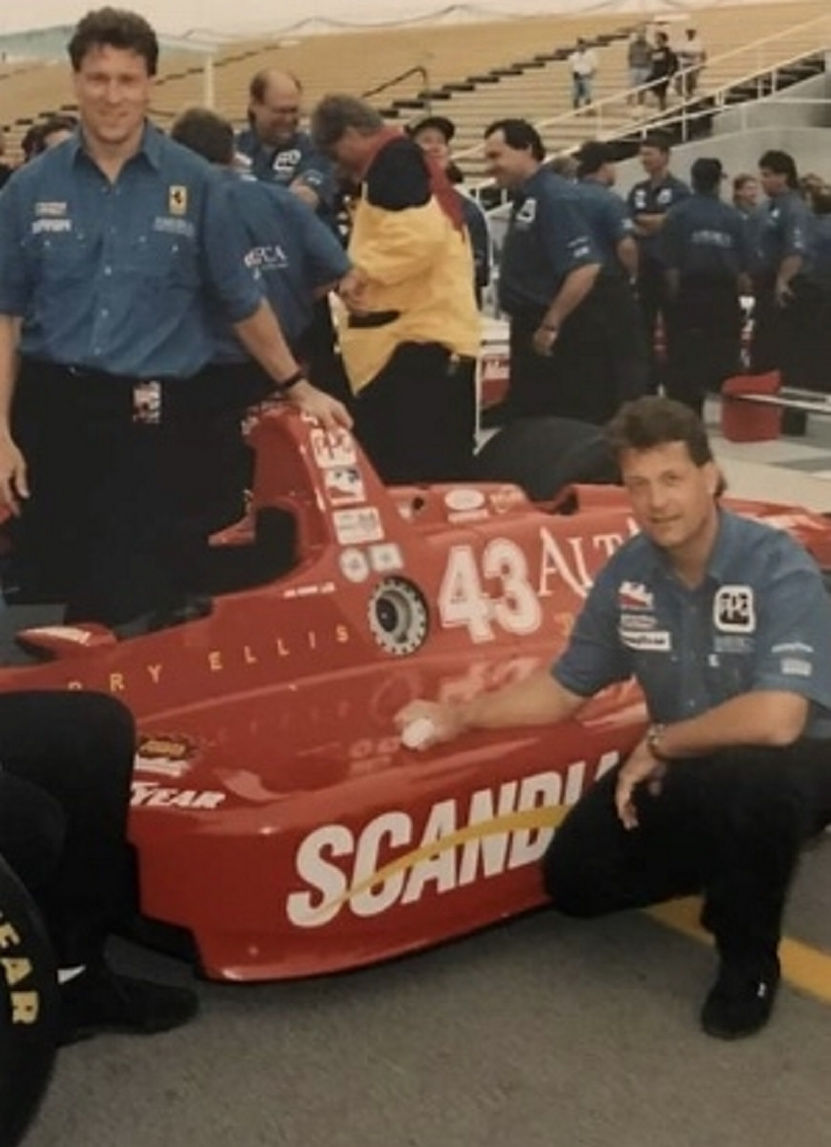 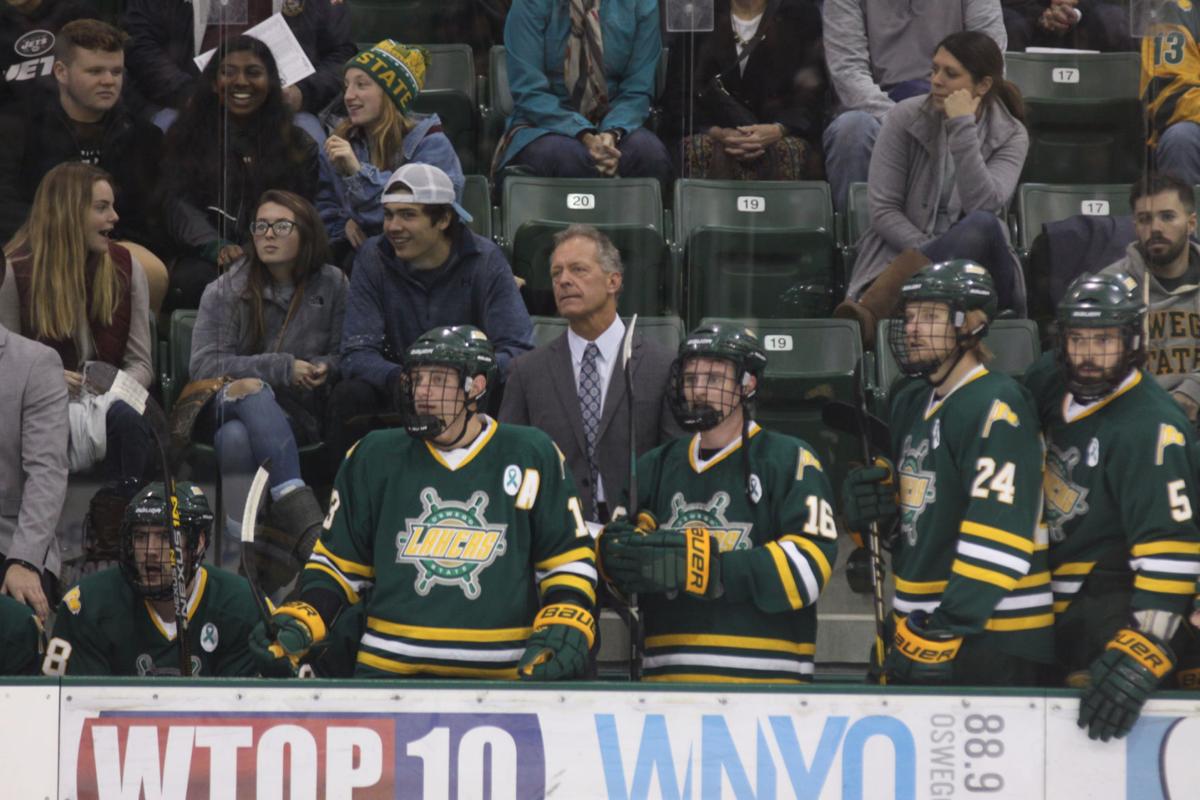 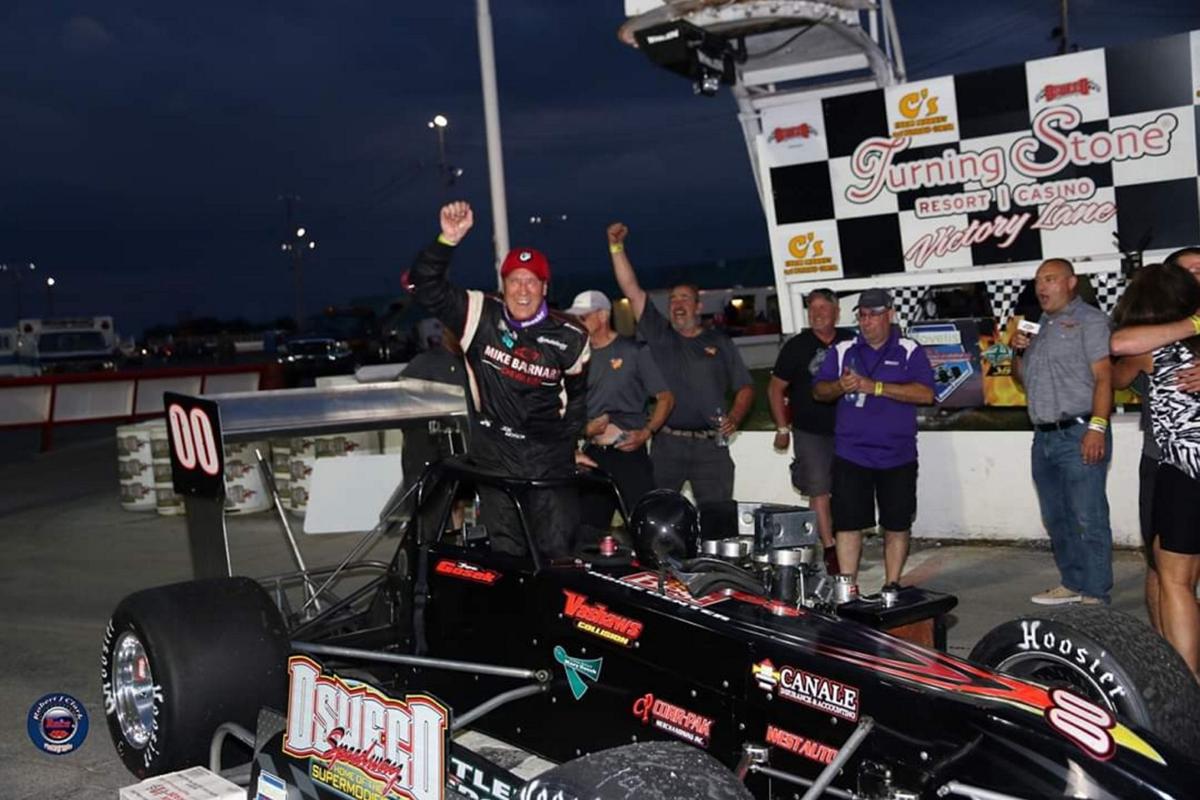 Joe Gosek, left, celebrates in victory lane last July at Oswego Speedway after claiming the most recent of his 45 feature wins at the track. Photo by Robert J. Clark Racing Photography.

Joe Gosek, left, celebrates in victory lane last July at Oswego Speedway after claiming the most recent of his 45 feature wins at the track. Photo by Robert J. Clark Racing Photography.

OSWEGO — The site of the Saturday-morning visits between brothers Joe and Ed Gosek changes with the seasons in Oswego, but the message has stayed consistent through the better part of four decades.

The Oswego Speedway Hall of Famer, Joe Gosek, and his younger brother of five years, Ed Gosek — the national-champion head coach of the Oswego State men’s ice hockey team — conduct weekly check-ins to review the final preparations for the event to follow that night and provide an unspoken reminder that family is on their side regardless of the outcome.

Joe and Ed Gosek, who were born and raised in Oswego as part of a four-sibling family to parents Leo and Mary, believe that support has led to the rarified success each has attained throughout Joe’s 40-year career in local auto racing and Ed’s coaching tenure in ice hockey, which started in area youth leagues before he was hired as a Lakers assistant in 1990.

“He’s an avid hockey fan and I’m an avid racing fan, and we always support each other,” said Ed Gosek, who became Oswego State head coach in 2003 after 13 years as an assistant in the program.

“We’re both very blessed to have the experiences that we have had through racing and ice hockey,” he added. “The hockey team at Oswego is a big part of the community, people are passionate about it, and it’s the same thing with the speedway in the summer. … We’re fortunate that we have a good relationship and we’ve both been able to have success at what we’ve done, and I think that comes from my dad and our parents’ hard work.”

Joe Gosek — who started racing his No. 00 supermodified at Oswego Speedway in 1980 and is often referred to as ‘Double O Joe,’ — ranks fourth all-time with 45 feature wins on the area track, according to its website, and his 21 different seasons with a victory, most recently last July, is tops all-time at Oswego. He is a three-time Oswego Speedway Bud Classic winner (1991, ’92 and 2002), which ranks sixth all-time, as well as a two-time track champion and was inducted into its Hall of Fame in 2011.

Ed Gosek helped his older brother as a member of the original pit crew for more than two decades, which included touring stints on the ISMA racing circuit, before his obligations as a full-time hockey coach increased with the Lakers.

“He could get the most out of kids and he was a motivator, and he was like that with me, too, in racing,” Joe Gosek said. “He was kind of like my younger mentor in a way, just helped keep me under control. When I started racing, he was kind of the crew leader and always had that way to organize and keep things under control.”

Ed Gosek, meanwhile, has guided his alma mater to its greatest heights during his 30-year tenure with the program and 17 seasons in the head position. He led the program to its only NCAA Division III national championship in 2007 and has posted a career record of 341-108-30 for a .743 winning percentage.

The 1983 Oswego State graduate has also masterminded three SUNYAC championships and won his third SUNYAC Coach of the Year Award last season. Ed Gosek was named the 2007 AHCA Ed Jeremiah National Coach of the Year and coached the Oswego Minor Hockey Association to four state titles prior to taking over the Lakers.

Ed Gosek also received the assistance of his brother during the early stages of his career as Joe Gosek helped coach teams in the squirts, peewees, and bantam divisions of Oswego Minor Hockey Association.

“When hockey or racing is going great, life is easy, everyone will pat you on the back and tell you how great you are,” Ed Gosek said. “But when you wreck the car on Saturday night and we would spend all week, every free moment, fixing the thing and pushing some positive support just to get back to the speedway the next week, and same thing with hockey when you have a bad loss or go through the struggles of a career, for him to stay positive with me the way I would stay positive with him, it means a lot and it’s certainly a big part of my success.”

Joe Gosek’s crowning achievement came in 1996 when he qualified for the Indianapolis 500, ultimately completing 106 of the 200 laps for a 22nd-place finish in the premier annual event for open-wheel racing.

He rented an apartment near Indianapolis Motor Speedway throughout the process for more than a month and was accompanied by a crew that included his brother, Ed, who also helped raise money and garner sponsorships in advance. Joe Gosek said that the support from Oswego Speedway patrons and his original crew members helped push him to the qualifying time.

“You need that support,” Joe Gosek said. “That was a high-profile situation, going against big-money people, and I was probably in a little over my head, so it makes a difference. You’re talking about the major leagues of the majors, the people you’re competing against are people that were my idols years before, so that was really cool. When I qualified, it was a dream come true.”

Ed Gosek, meanwhile, reached the pinnacle of his sport in 2007 when Oswego State captured the NCAA Division III national title with a 4-3 overtime victory over Middlebury in Superior, Wis.

Joe Gosek was unable to attend along with several other Lakers supporters due to weather conditions altering flight schedules and travel plans, so he watched the game at The Press Box in Oswego.

The stream was available on a one-hour delay, Joe Gosek said, so he held off on reaching out to congratulate his brother until he saw the outcome. He then recalls being among the legion of fans that met the squad on campus when they returned home from the Frozen Four as champions.

“That was special for him,” Joe Gosek said. “As a coach, he was like me as a driver, working to get to the top, and for that to happen for him, everyone was proud of that whole deal. That was a lot of hard work, a lot of good people and well-deserved.”

The brothers long dreamt of their current careers in the area while growing up with their oldest brother, Stan, and sister, Sue. Despite their five-year age difference, Joe and Ed were close throughout childhood and both fondly recalled attending Oswego Speedway races with their parents in the 1960s and ‘70s. They were also regular pond hockey players among their respective friend groups, though Joe says he picked up the sport at a later point than Ed when the latter became enthralled around age seven.

Each brother and their siblings also received strong support from their parents. Mary Gosek died in June 2016 at age 94 while their father, Leo, died in October 1985.

Joe Gosek won his first feature at Oswego Speedway during the summer of ’85 and said that his dad witnessing his first victory is among his most cherished memories.

“We lost our dad young, and my mom was a rock,” Ed Gosek said. “She loved going to the hockey games and as a mom should, she was proud of both of us, so it was nice when we were able to put a smile on her face and make her a part of it.”

Joe and Ed Gosek continue to help each other in their respective sports when needed and check in a few times per week during each season. Joe will visit Ed at least every Saturday at Marano Campus Center Arena and sit in on coaches’ meetings and train at the facilities, occasionally skating up to work out on the ice.

Ed Gosek said that Joe “has a lot of opinions,” regarding the program and they chat regularly about team performance and recruiting. Joe Gosek is a regular at Lakers home games and travels to away outings with his wife, Vicki, and their two young daughters, Piper and Remi.

Ed Gosek is likewise a frequent visitor to his brother’s race garage during the offseason and while not as involved in working on the car as in the past, still lends a supportive ear when talking strategy and dissecting past races each Saturday morning. He attends most events at Oswego Speedway but admits he is more anxious for his brother’s safety at times than he is cheering for victory. The track remains on pause due to an executive order by the Governor’s office until at least Aug. 2.

While each brother has already produced a decorated career that rivals any among their peers in two of Oswego’s favorite sporting pastimes, neither has any imminent plans to ease back.

“We’ve been fortunate that we’ve both done what we love for most of our life and can continue,” Joe Gosek said. “I wish him all the luck, he knows I’m behind him 100 percent as well as he is with me, although I think mine is a little more dangerous and he might be more relieved when I decide to get out of it finally.”

Ed Gosek added: “We’re both competitive, we both always have the same approach, it’s the same in either racing or coaching. If you don’t enjoy it and if you’re not excited to be there and don’t still get butterflies or get excited, then it’s time to get out. He hasn’t reached that point, and I haven’t either.”