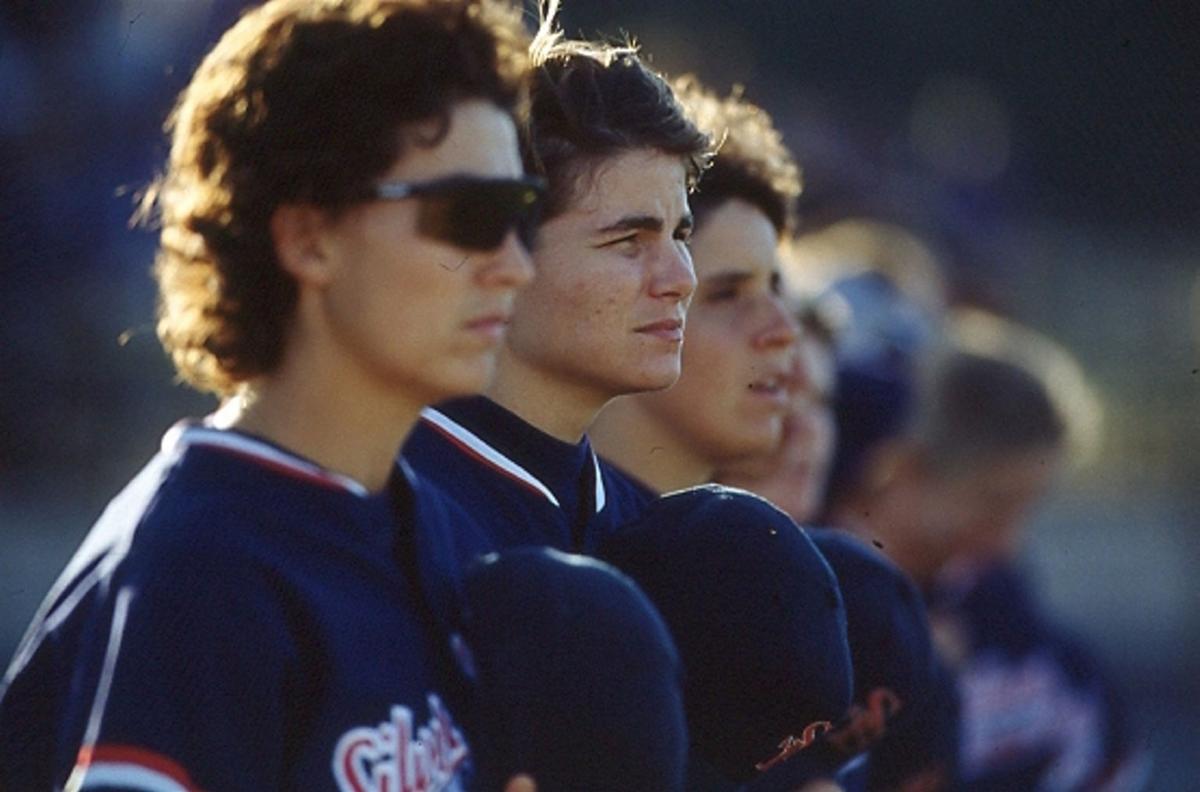 Members of the Colorado Silver s line up before their game against the Watertown All-Stars on Aug. 6, 1994 at the Duffy Fairgrounds. Watertown Daily Times photo 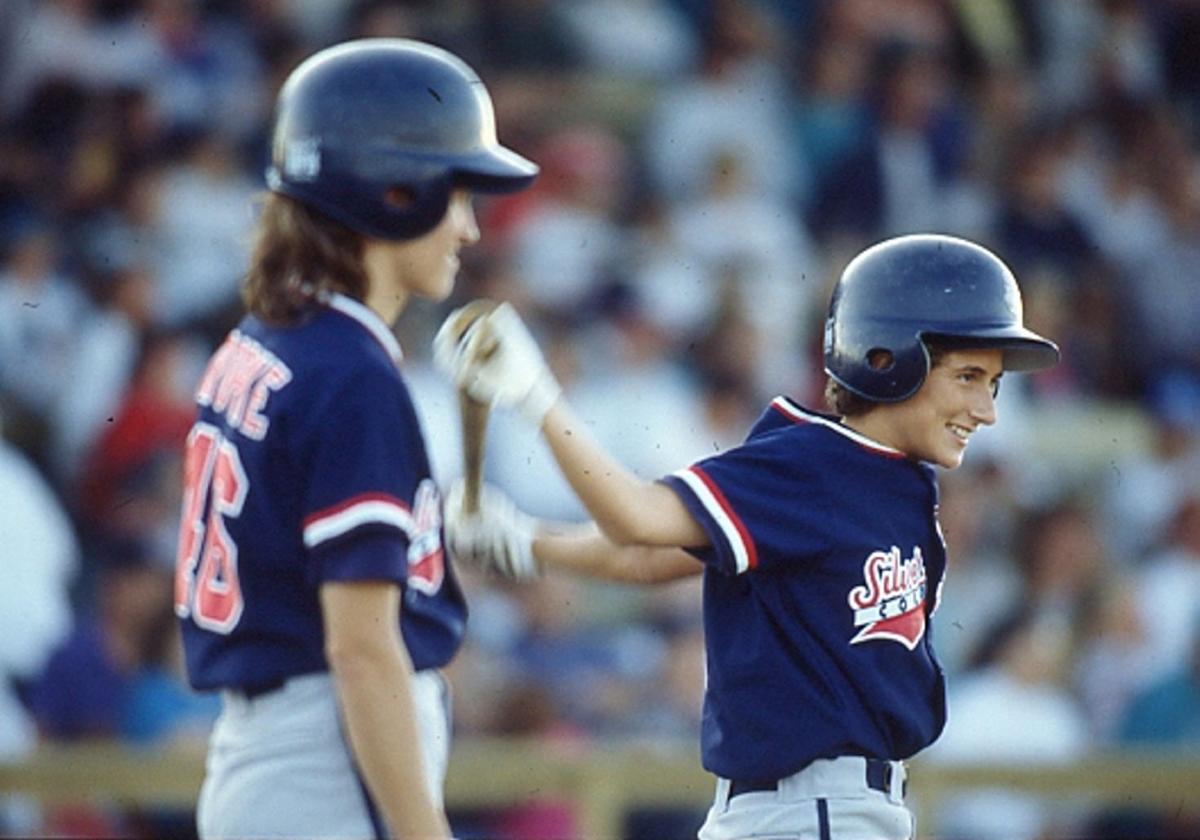 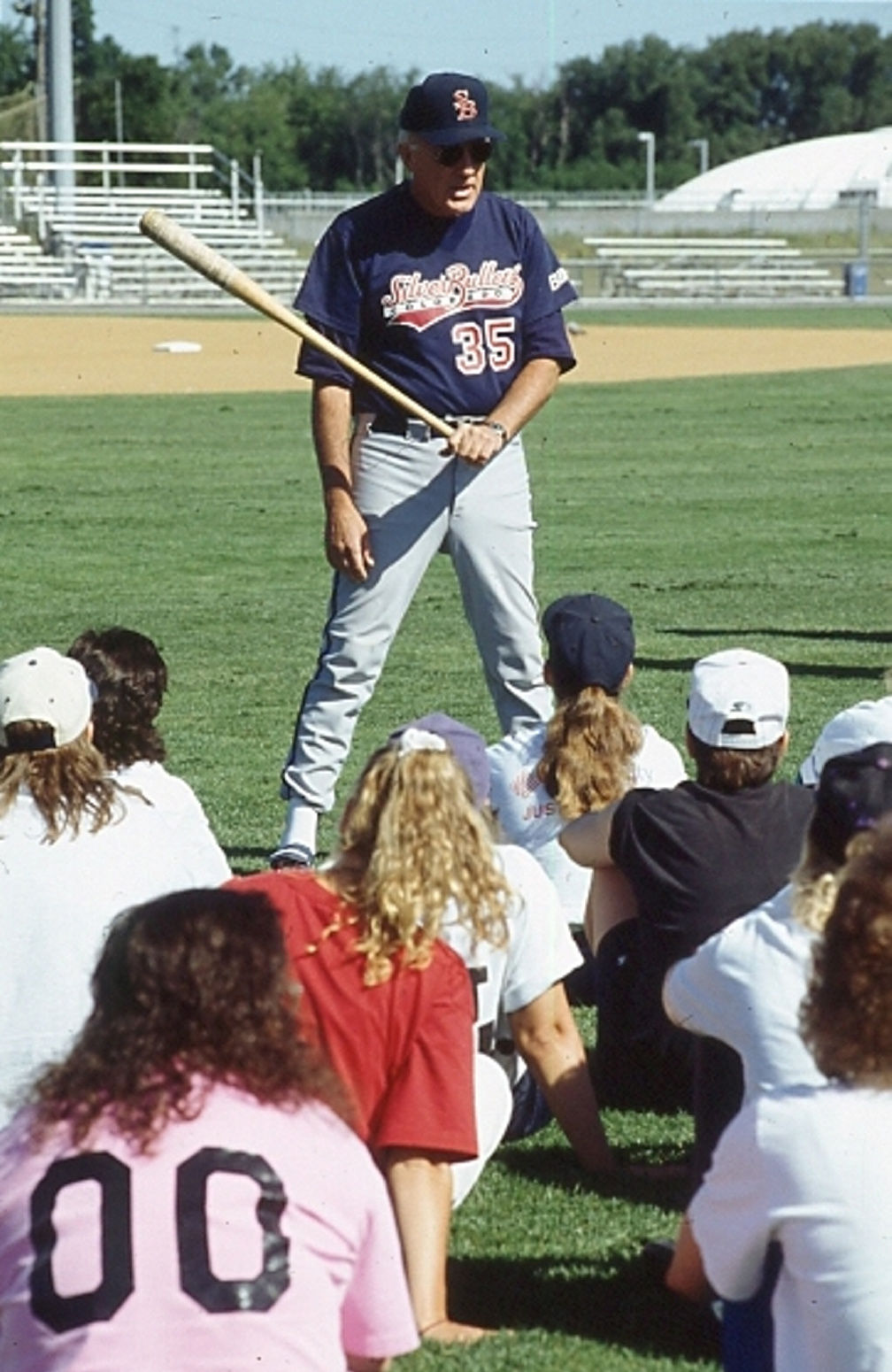 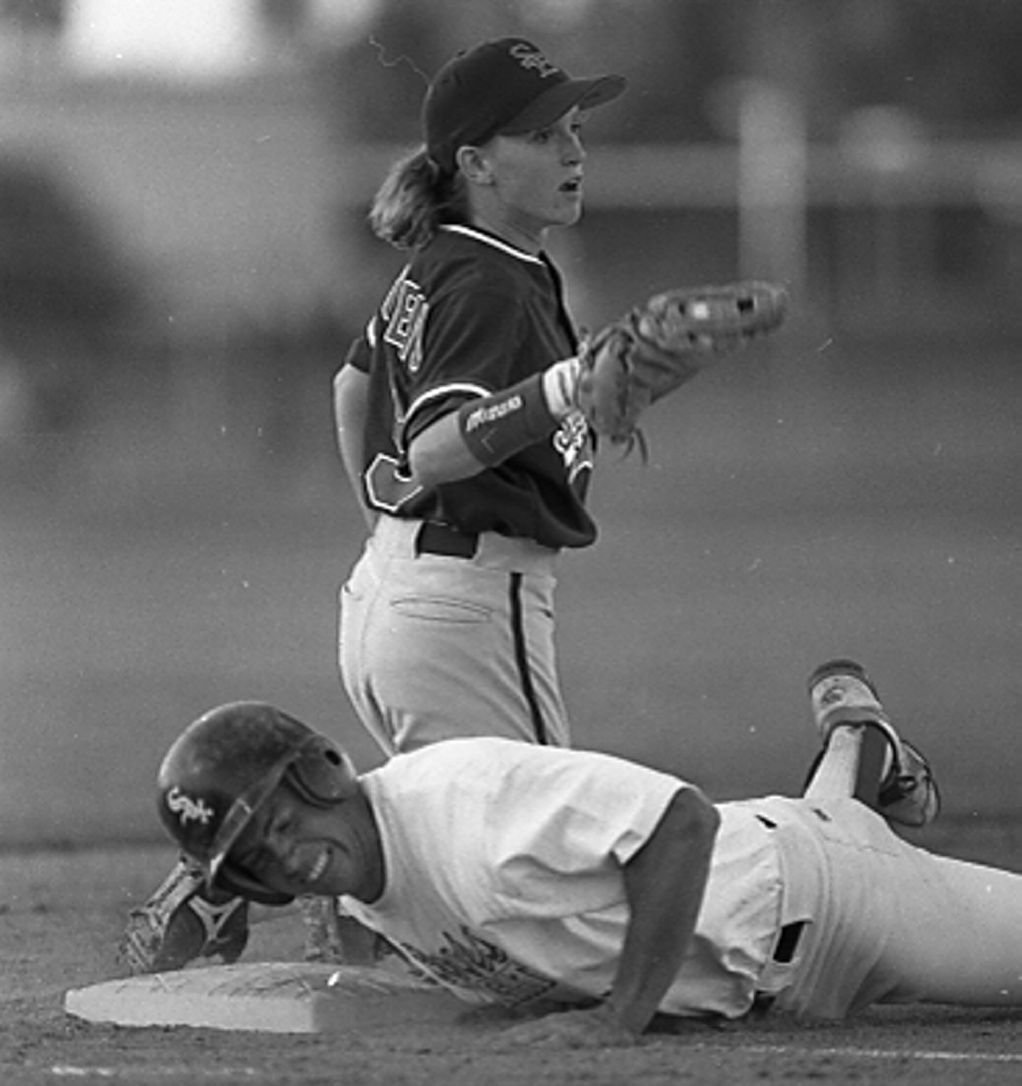 Colorado Silver s first baseman Julie Croteau holds the ball after tagging out the Watertown All-Stars’ Joe Guyder on a pick off during a game Aug. 6, 1994. Watertown Daily Times photo. 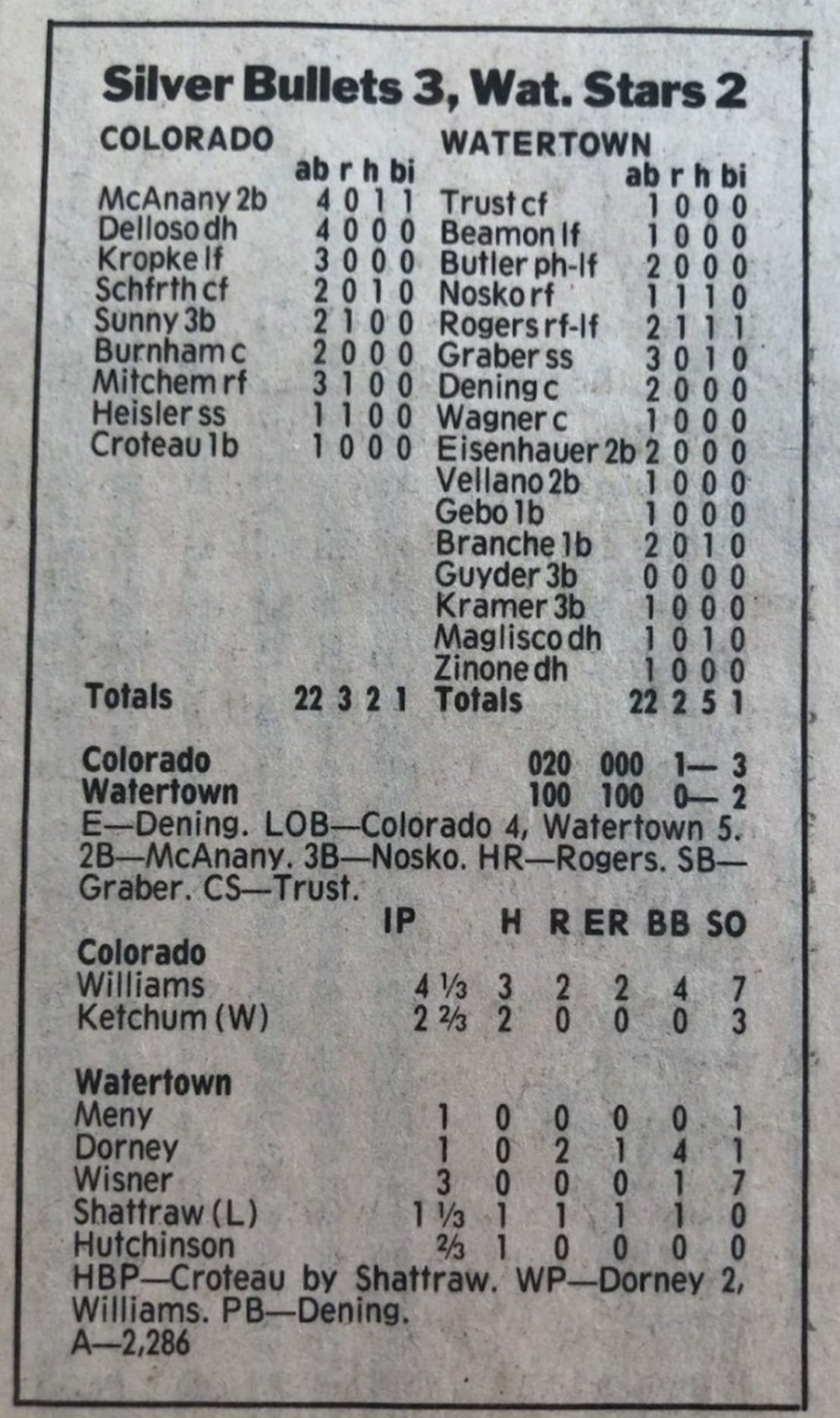 The boxscore for the game between the Colorado Silver s and Watertown All-Stars on Aug. 6, 1994.

Members of the Colorado Silver s line up before their game against the Watertown All-Stars on Aug. 6, 1994 at the Duffy Fairgrounds. Watertown Daily Times photo

Colorado Silver s first baseman Julie Croteau holds the ball after tagging out the Watertown All-Stars’ Joe Guyder on a pick off during a game Aug. 6, 1994. Watertown Daily Times photo.

The boxscore for the game between the Colorado Silver s and Watertown All-Stars on Aug. 6, 1994.

WATERTOWN — It’s May 2020. Major League Baseball is in disarray.

The season has yet to begin as MLB powers have delayed the start at least three months due to the coronavirus pandemic. Meanwhile, the MLB players union and the league’s owners disagree on how players should be paid.

Flashback to just over 25 years ago:

The season is just six days away from expiring. The MLB players union and the league’s owners disagree on how players should be paid. The union voted July 31 to strike and on Aug. 12 the players walk. Eventually, the rest of the season and the World Series is canceled.

But in Watertown, 25 years ago, baseball appeared to be alive and well.

The Watertown Indians, the Class A short-season minor league team of the Cleveland Indians played at the Alex T. Duffy Fairgrounds. The Watertown Athletics, a summer traveling baseball squad stocked with some of the best talent the north country, had reached mid-season in another year of sharing the fairgrounds with the Indians.

Amid that scene on Aug. 6, the Colorado Silver Bullets, an all-female baseball team that had attracted large crowds since its debut in May, came to the fairgrounds for an exhibition game, hosted by the Watertown Indians.

“Playing against a team full of women, that was very, very different,” said Shane Wisner, a former Watertown High School and Oswego State pitching standout who was a member of the Athletics and entering his second year with Jefferson Community College at the time. “I had never competed against a female before. When I was younger you would play against girls but never anything since.”

Watertown Indians general manager Jack Tracz organized the exhibition game, announcing the Watertown date in May. Tracz said bringing the Silver Bullets into town was “a considerable expense,” in a Times story from May 26, 1994, but did not reveal contract details.

On the day of the game, an official total of 2,286 fans jammed the fairgrounds, far surpassing an average Watertown Indians home game.

“It was a big deal for a young guy. I was not used to playing in front of that many people,” said Wisner, now 45 and a supervisor for the Jefferson County probation department. “That was the biggest crowd I ever played in front of, the place was packed.

“I grew up on Cedar Street ... and I would go to the fairgrounds (as a kid) for Watertown Pirates games. The crowds were pretty good then but I had never seen a crowd that size. The grandstands were pretty full.”

Wisner kept scrapbooks of his baseball achievements and he still owns a Silver Bullets baseball with team autographs as well as autographs from Phil and Joe Niekro.

The scouting report on that first Silver Bullets squad evaluated the team as sound fundamentally and good fielders. The Silver Bullets pitched fairly well but struggled mightily at the plate.

When they arrived in Watertown, they were batting .150 as a team and held an overall record of 4-30.

“I remember watching them warm up and thinking, ‘gee, they’re solid,’” said Wisner, who pitched the third, fourth and fifth innings in that game, striking out seven.

“It became pretty apparent for sure that hitting was their weakness. ... They used wooden bats, which is a factor if you don’t have the (arm) strength. The bat speed wasn’t there for them. I threw pretty hard then and I would just throw fastball after fastball.”

Yet, when Mark Hutchinson, the Watertown Athletics’ ace and former South Jefferson, JCC and Hartwick College hurler, came into the game in final inning of the seven-frame exhibition, that’s when the Silver Bullets struck.

Michelle McAnany, the smallest player on the field at 5 feet, 110 pounds, delivered a double to score the winning run as the Silver Bullets defeated the Watertown All-Stars, 3-2.

It was the fifth win in a 6-38 season for the Silver Bullets.

“We’re proud to be able to help,” Wisner said wryly.

But the way the game unfolded still doesn’t sit well with at least one member of the former Watertown Athletics.

“We would have beaten the Silver Bullets straight up,” said Dick Monroe, the manager of the Athletics at the time. “Of that, I have absolutely not one doubt.”

The Silver Bullets began exactly 40 years after the previous example of women’s professional baseball, the All-American Girls Professional Baseball League, played its last game. The salary for each Silver Bullets player was $20,000 in 1994, significantly more than that of a minor league player at that time. The Silver Bullets lasted four seasons, competing against men’s teams the whole time.

The Silver Bullets went 11-33 in 1995, then 18-34 in 1996 and 23-22 in 1997. The team switched to metal bats in ‘96 and their hitting and record improved dramatically. The ‘97 season included a brawl against an 18-and-under boys team in Georgia when Kim Braatz-Voisard charged the mound after she was hit by a pitch and spotted the pitcher laughing at her as she walked to first.

Despite the winning record, and larger crowds after the brawl, the Coors Brewing Company, the name sponsor since the beginning, withdrew its sponsorship and the Silver Bullets folded after the ‘97 season.

“The short-range goal is to see a lady in the minor leagues. The long-range goal is to get a couple of women to play major league baseball,” Niekro told the Times in an Aug. 4, 1994 article.

Yet, no woman has grabbed even a spot on the bench in the all-male sport since. While many supported the Silver Bullets for their love of the game — the Baseball Hall of Fame features a Silver Bullets exhibit — others considered the attempt to play men as unproductive and nothing more than a battle-of-the-sexes stunt.

In the years since, the United States has formed a national women’s baseball team that plays regularly in international tournaments, but attracts little notice. Talented U.S. female baseball players like Ila Borders and Eri Yoshida arrive with much fanfare before the attention eventually fizzles.

It’s a familiar feeling for women who play baseball in the U.S.

“I didn’t know anything about this team when I played them,” Wisner said of the Silver Bullets.

Dick Monroe believes Hutchinson never should have been in a situation to give up the game-winning hit against the Silver Bullets that August night.

In Monroe’s view, Hutchinson and Wisner, both Athletics players, could have pitched the entire game and the Silver Bullets, which managed just two hits in the exhibition, wouldn’t have had a chance.

“I offered the powers that be in a meeting at a restaurant in town to put my Athletics team on the field straight up against the Silver Bullets,” said Monroe, a Saranac Lake native who managed the Athletics between 1994-96 and also pitched for the team. “It would have been a great opportunity to highlight the talents of some of the great area collegiate players we had. I would have supplied uniforms, equipment, managed, had coaches ... All our team wanted was experience and exposure.”

Indians GM Tracz, however, was selling roster spots for $100 and several out-of-the-area players landed $100 sponsorships to join the Watertown All-Stars lineup. Monroe said he negotiated with Tracz to pay $100 for all of his players to be added to the roster and also allowed the use of the Athletics’ equipment.

The day of the game, as the stands filled, Monroe said Tracz informed him that some of the roster spots would be occupied by members of the local media. Outraged, Monroe gathered his players for a meeting in the locker room.

“I told Jack that I refused to be a part of a joke,” he said. “I called all of my players together for a meeting in the locker room. I told them what was going on and that I would not play.”

Several of the Athletics did play in the game, including Wisner and Hutchinson, outfielder Charlie Trust and eventual Watertown mayor Joe Butler. But two local media members made it to the mound during the game and accounted for all three of the allowed runs, walked five and threw two wild pitches.

“I remember at the time, only four of the guys I played with (on the Athletics) were on the team,” Wisner said. “... I don’t remember who was in charge of that, not sure why the other guys didn’t (play).”

The Silver Bullets started the season playing against former major league players of the independent Northern League and lost 19-0 in their first game. They quickly changed their strategy to competing against over-30 all-star teams and college all-star squads. It’s possible ensuring against another blowout, along with guaranteeing a captivated crowd, were objectives when Tracz chose the roster.

“Part of it is the entertainment value for the fans,” Wisner said. “People wouldn’t go out to see a team get beat 19-0, even if it was something different.”

As far as Monroe is concerned, that day in August was a missed opportunity for Watertown.

“My players just wanted to play baseball and possibly get the right set of eyes on them,” he said. “I had several with real talent, and opportunities like that up here don’t come all that often.”