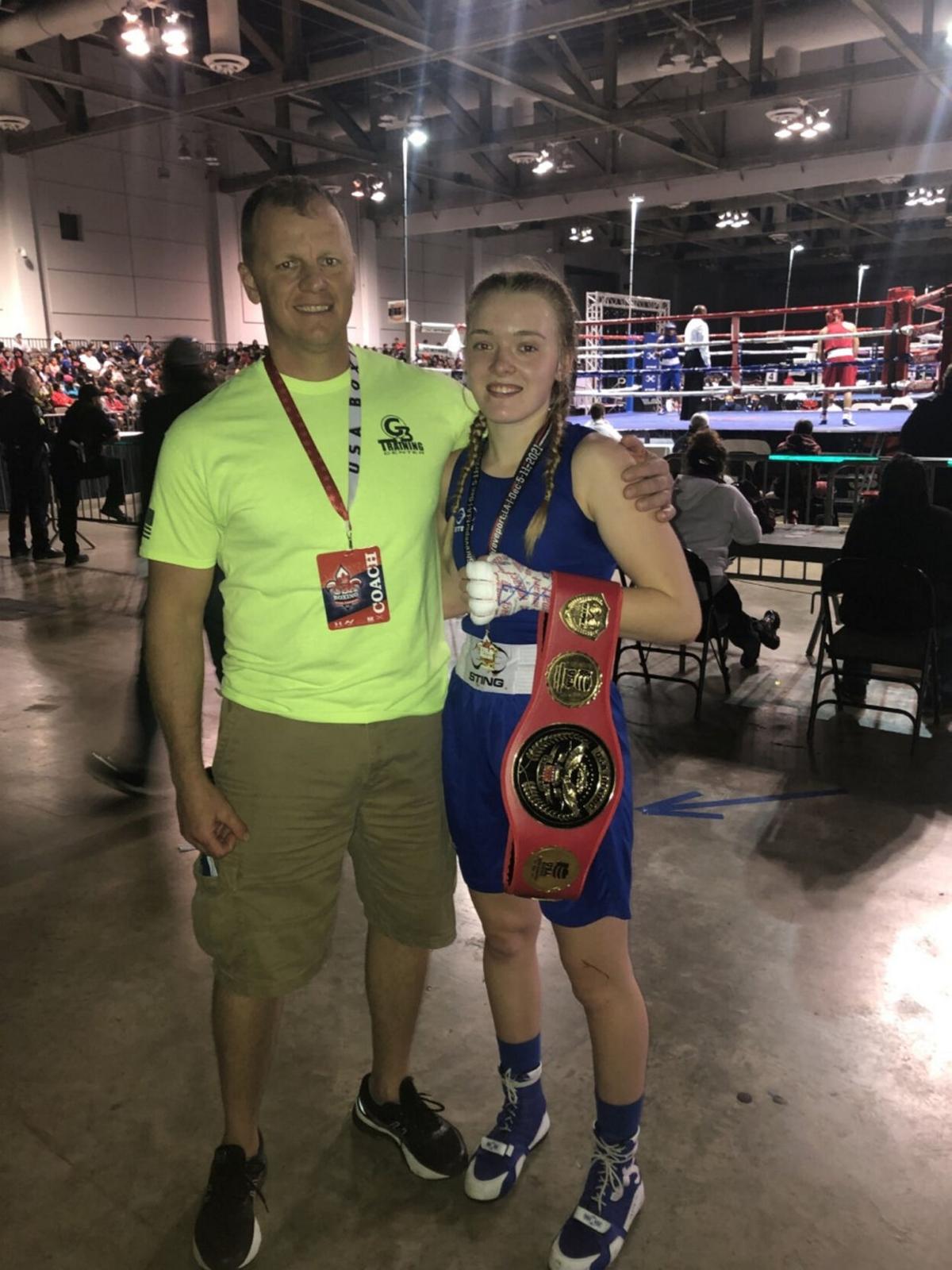 Randi Griffith poses with her father and coach, Gordy Griffith, after winning the 132-kilogram bout during Saturday’s matches of the USA Boxing National Championships in Shreveport, La. Photo provided 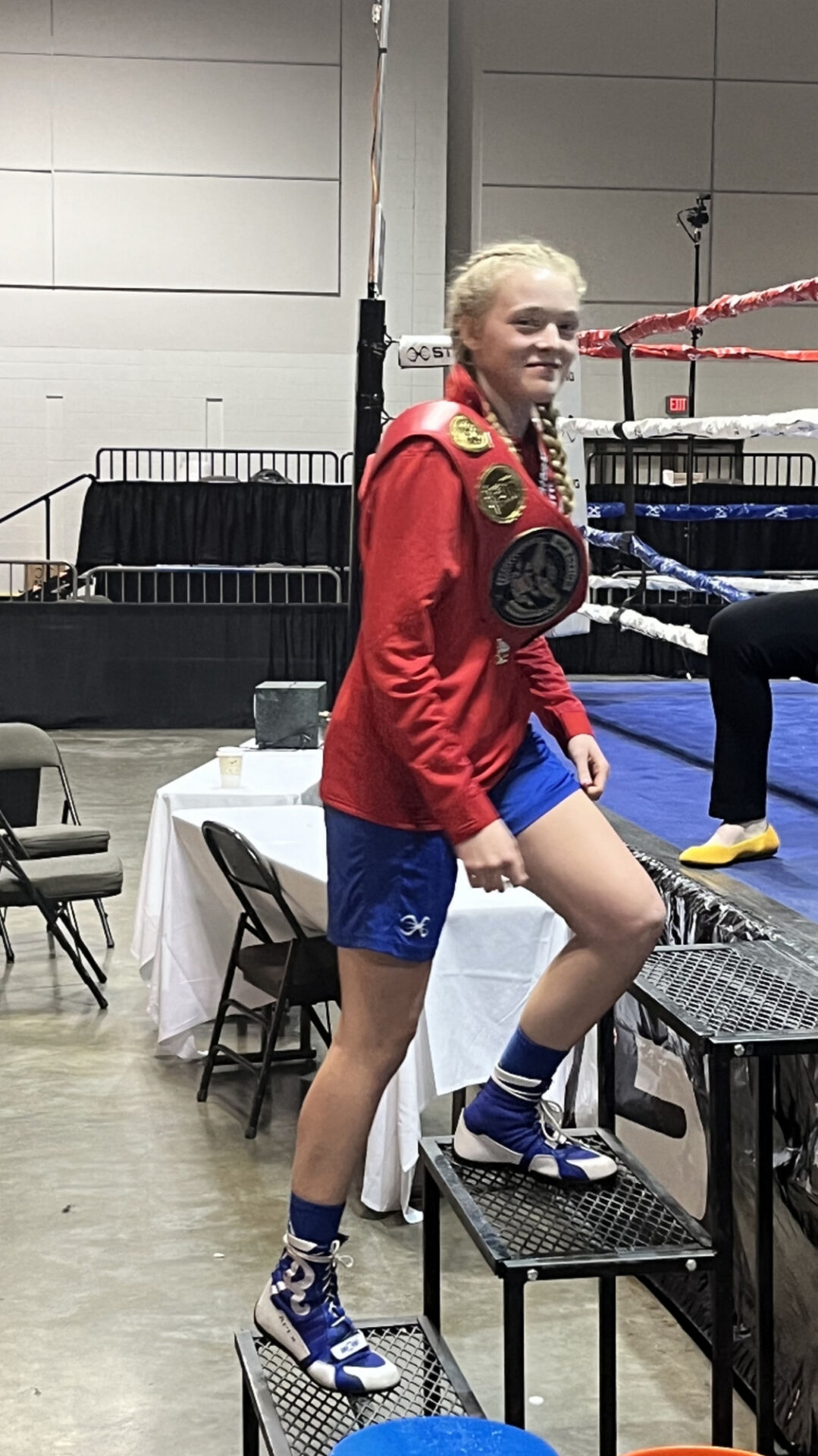 Randi Griffith gets ready to step into the ring. Photo provided

Randi Griffith poses with her father and coach, Gordy Griffith, after winning the 132-kilogram bout during Saturday’s matches of the USA Boxing National Championships in Shreveport, La. Photo provided

Randi Griffith gets ready to step into the ring. Photo provided

Randi Griffith’s boxing travels have taken her all over the country and she’ll get to train at the home of Team USA in Colorado Springs, Colo.

Griffith, a Gouverneur High School student who, along with her twin sister, Rikki, won titles at the National Junior Olympics last summer, captured her championship bout in the 132-kilogram youth female category during Saturday night’s sessions of the USA Boxing National Championships in Shreveport, La.

“I’ve won other tournaments, but winning this one was a really big deal,” said Randi Griffith, who lives in Fowler.

Randi Griffith defeated Alexandria Luby of Caldwell, Idaho, for the U.S. boxing crown by unanimous decision. Winners of the tournament earn a U.S. boxing team berth and an invitation to train for international competitions at the USA Training Center in Colorado.

“It’s the highest level that she can go and work with USA coaches,” said Gordy Griffith, who is the twins’ father.

Randi said her first trip to the Olympic training center will be sometime in May. She’s looking forward to taking on some top fighters.

“It’s a big deal to get to go there (to the Olympic training center),” Randi Griffith said.

Rikki Griffith just missed out on making the team at 125 pounds after her match against Yoseline Perez of Houston was controversially stopped in the third round.

Despite the loss, Rikki was glad her twin sister won her division.

“Rikki is extremely happy for her sister,” Gordy Griffith said. “The loss will motivate her.”

The Griffith twins travel to Syracuse a couple times a week so they can spar with different boxers other than themselves. They do train together, but both like to trade punches with other competitors.

“We don’t like to spar against each other,” Randi Griffith said.

Combat sports run in the family as Rikki Griffith won the Silver Gloves championships in September. Their younger sister, Zoey, is a standout wrestler on the Gouverneur team in the 126-pound weight class. Their father said it’s wonderful for girls to get more opportunities.

The Griffith sisters are standouts in cross country as well as indoor and outdoor track and field. Zoe and Rikki both represented Gouverneur in the Class C girls division race at the NYSPHSAA cross country meet Nov. 13 at Chenango Valley State Park in Section 4. Rikki placed 50th and Zoe was 110th out of 130 runners in that race.

“Running cross country and track helps a lot, but we still get our runs in during our off time,” Randi Griffith said.

The twins also thank their father for helping motivate them to become better boxers. His guidance has helped the duo become two of the best fighters in their age group.

“He really pushes us to be better and keep us in the gym,” Randi Griffith said.