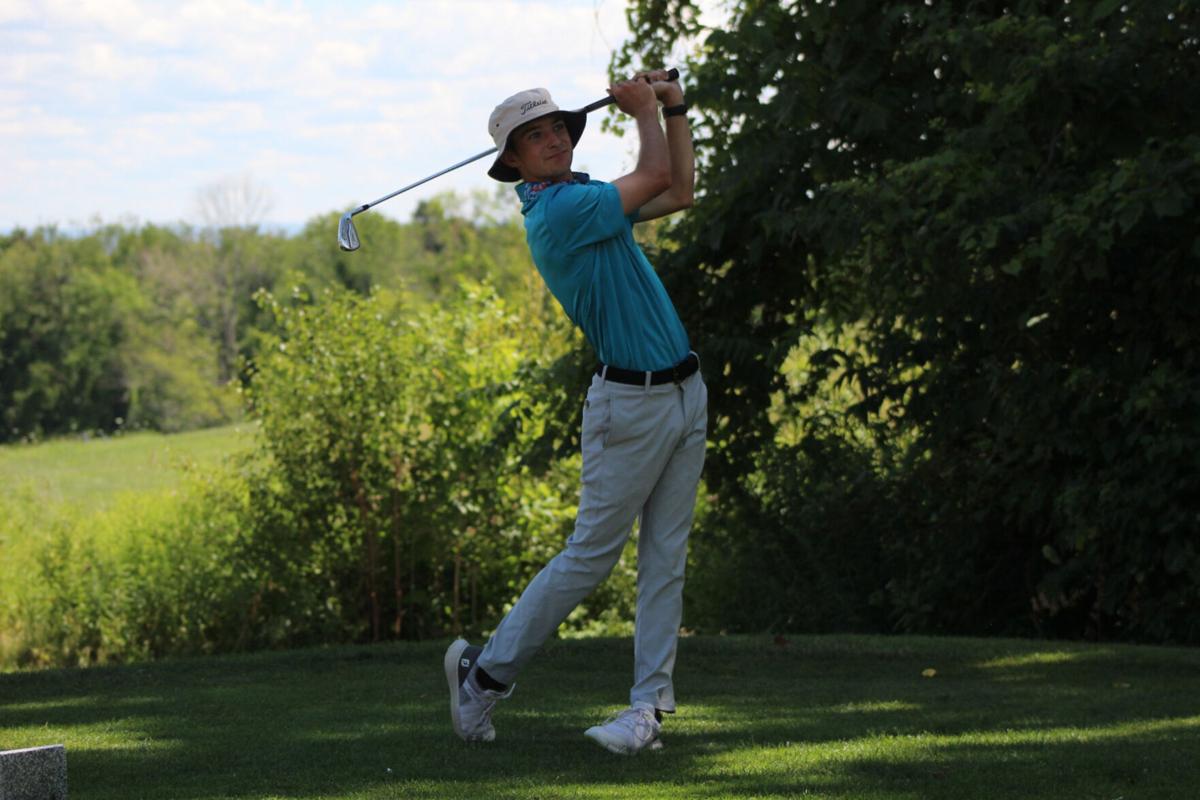 Danny Christy, of Partridge Run Golf and Country Club in Canton, tees off on the back nine of the NNYGA 6-man tournament Saturday at Carlowden Country Club. Philip Sanzo/Watertown Daily Times 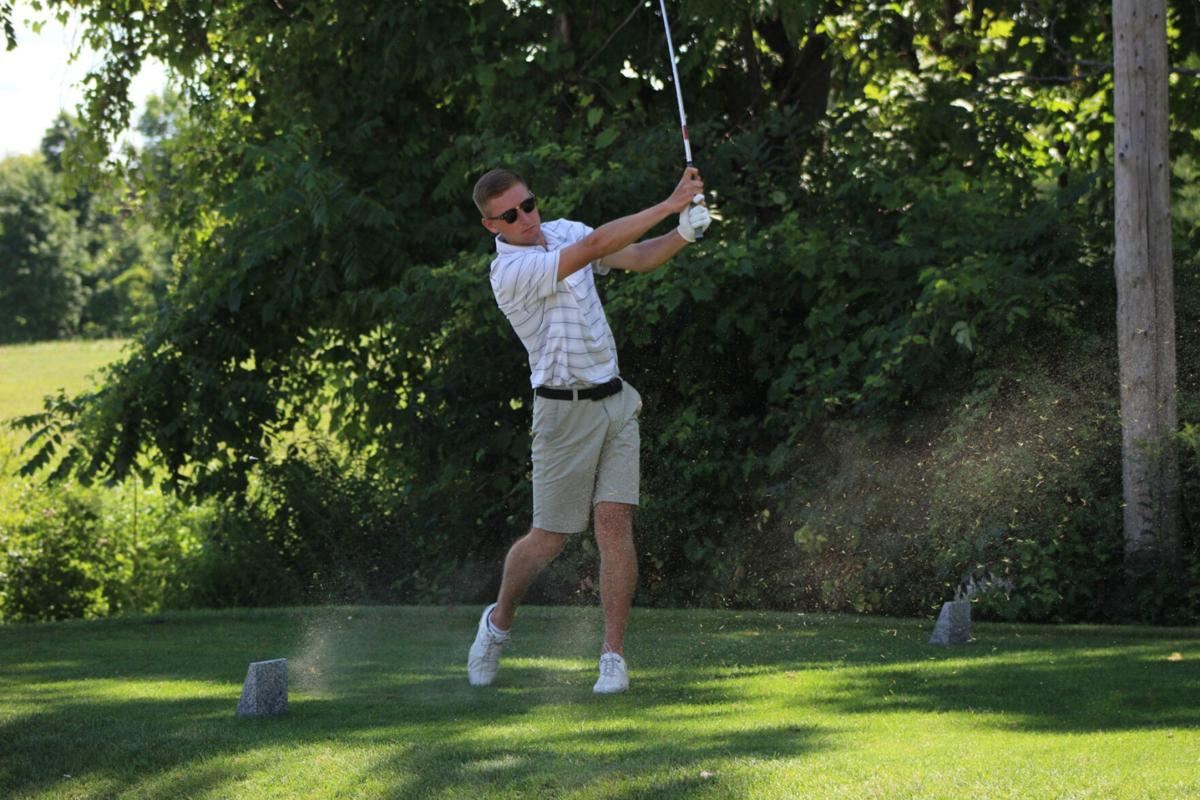 Mike Dipala, of C-Way Golf Club, tees off on the back nine of the NNYGA 6-man tournament Saturday at Carlowden Country Club. Philip Sanzo/Watertown Daily Times 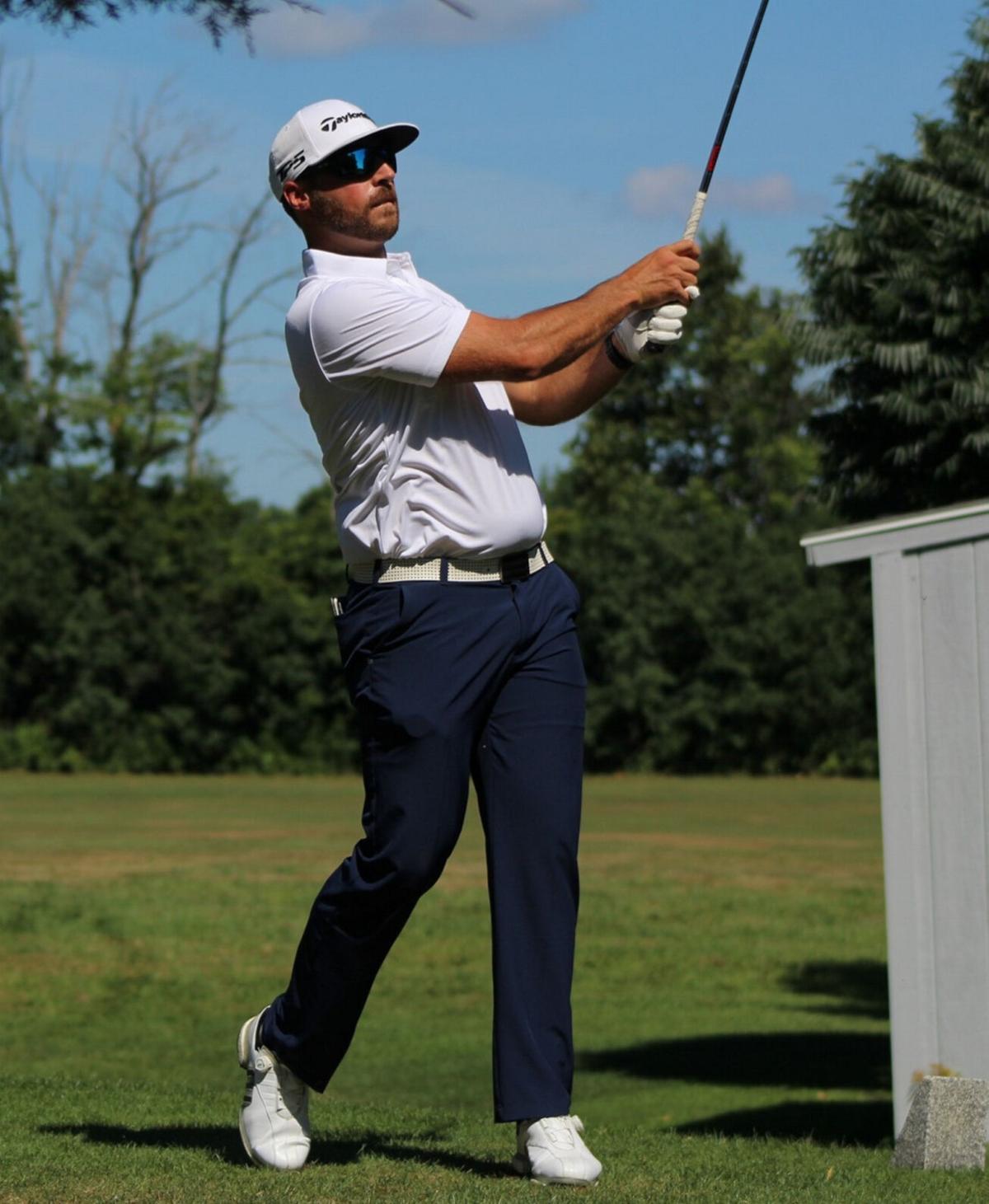 Danny Christy, of Partridge Run Golf and Country Club in Canton, tees off on the back nine of the NNYGA 6-man tournament Saturday at Carlowden Country Club. Philip Sanzo/Watertown Daily Times

Mike Dipala, of C-Way Golf Club, tees off on the back nine of the NNYGA 6-man tournament Saturday at Carlowden Country Club. Philip Sanzo/Watertown Daily Times

DENMARK — St. Lawrence University Golf Club, leading the field going into today, is trying for the Northern New York Golf Association’s 6-Man Tournament three-peat. But they’re far from alone at Carlowden Country Club as their score of 463 is only a stroke ahead of Malone Golf Club’s 464 and two strokes ahead Watertown Golf Club’s 465.

The 89 golfers, which make up 10 teams from throughout the north country, were split into groups of three with each group being a mix of golfers from different clubs.

For the first time, the NNYGA altered how its 6-man tournament would be scored. Each club’s team consists of six, 18-and-over players and a senior, a super senior and a junior. In the past, only the scores from the main six players were calculated, while the seniors, super seniors and juniors competed for their own title. Now, after each day, the top six scores from each team are used, no matter what category.

This opened the door for seniors, super seniors and juniors to play a role in their team’s overall success in the tournament.

For some squads, like St. Lawrence University, it paid major dividends. Fourteen-year-old Ryan Jones shot a 71, one-under-par, giving his team its lowest score, which played a large role considering the narrow separation of the top three teams.

“I had five birdies today, should have made some more,” Jones, a student at Canton Central School, said. “No. 7 hurt me, a double-bogey, but I bounced back with a birdie on the last hole.”

Tyler Berkman, the junior for Potsdam, shot the lowest score of the tournament with a 68. Potsdam is in fourth place with a score of 469.

Five of St. Lawrence’s six top scores were sub 80. Jake VanHouse shot a 76, at 19 years old, this is his first year participating in the six-man tournament.

“It’s a ton of fun, I saw the sign-ups a couple of weeks ago and my family kept pushing me to do it and I’m so glad I did,” said VanHouse, a former Ogdensburg Free Academy athlete who golfs for Elmira College. “The qualifier was great, it’s a great course here and hopefully we can continue (today).”

Malone has finished as the runner-up to St. Lawrence for the past two years. O Saturday, Malone’s Trent Thomas and Joe Delisle shoot a 72 and 73, respectively. Thomas’s 72 is the lowest of any of the non-senior, super-senior or junior golfers.

Delisle, who has played the course a handful of times in the past, noted how firm Carlowden played Saturday.

“You’re not hitting clubs you’re used to hitting from certain distances,” Delisle said. “You think you have a 150-yard shot but it’s playing like 135 because it bounces so much.”

When a course plays like that, Delisle said it takes some early adjustments.

“You gotta start thinking about it,” he said. “It caught me a little bit in the middle where you’re trying to think, instead of just swinging the club, you start thinking, ‘how do I guide it to a spot where it just bounces and rolls.’ It was fine, it just took a little bit to get used to, it played different than even last week when we played here.”

Kris Hardy added a 74 to Malone’s points, he was one of three Malone golfers to finish under 75, the most in the tournament. He said that a golfer needs to play Carlowden at least 10 times to get the hang of it. “The greens are super quick and you have to understand where the valley is,” Hardy said. “You have to putt toward the valley and you just have to be very patient off the tee, a lot of short shots off the tee. You gotta maintain some patience.”

Four of Watertown’s six scores where under 80. DJ Marconi, competing in his first 6-man event, had a rough start but followed it up by birdieing on four of five holes between nine and 13. Marconi also noted how the greens at Carlowden are more challenging than at Watertown Golf Club.

“There is a lot more undulation, so there are more slopes, you have to be more respectful of pins that are on those slopes and try to leave the ball below the hole,” Marconi said. “I did that OK on some holes and really bad on others.”

Today’s winner will be decided based on each team’s top six players for the weekend. With the tournament being a team effort as opposed to a traditional individual tournament, the strategy that goes into each hole is slightly different.

“For me personally, I’ll pick shots where I know I’m not going to give up two strokes to try and gain one,” Delisle said. “I don’t get greedy, because I know it’s coming down to six scores, not one score. So, if I give up a bogey and get the chance to make it up somewhere else, I’d rather do that then try to hit a hero shot and end up with a double bogey and really hurt the team.”