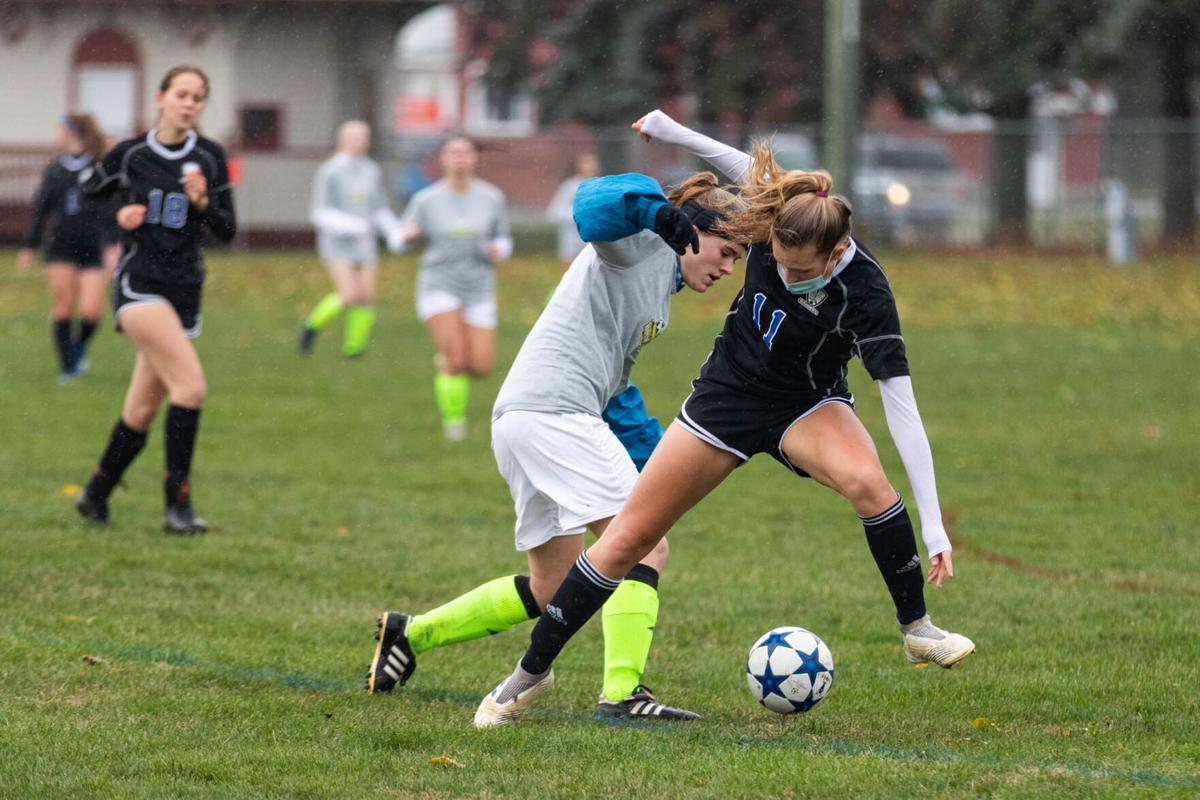 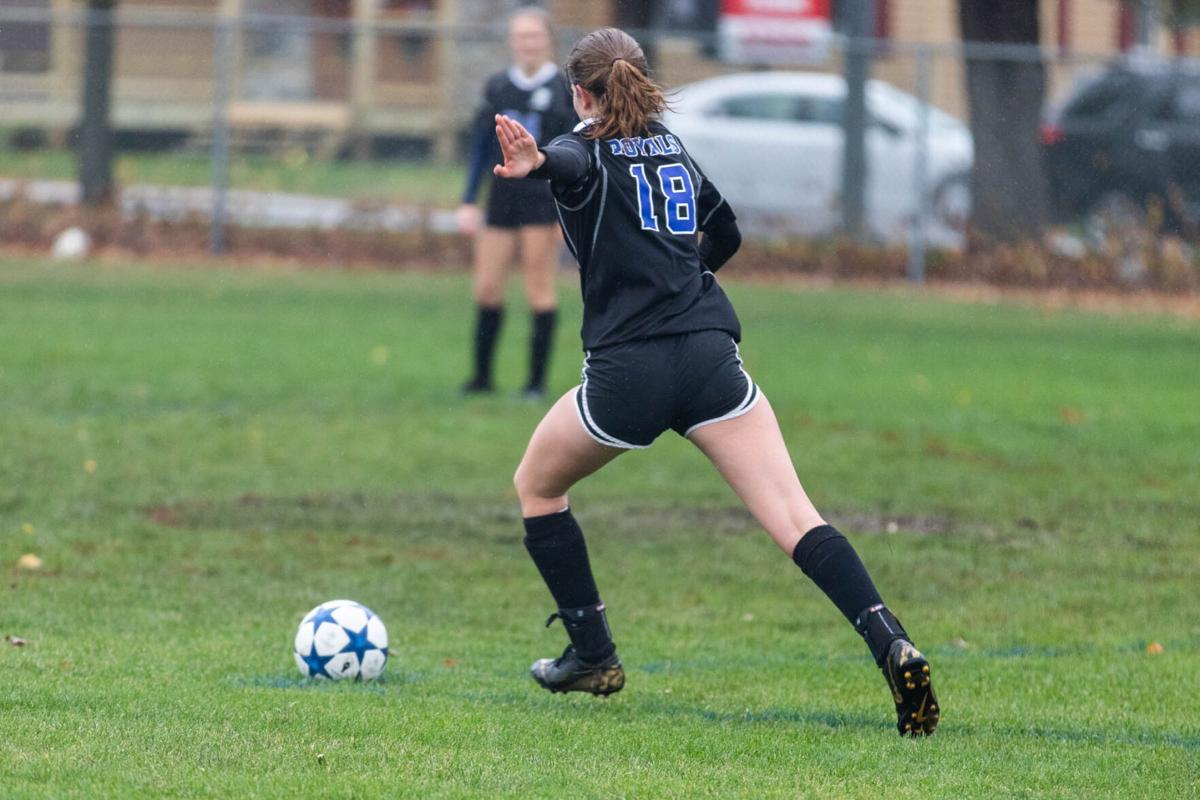 Black River Soccer Academy consists of varsity soccer players from the area who haven’t had a chance to play for their respective schools because of the coronavirus. Sydney Schaefer/Watertown Daily Times 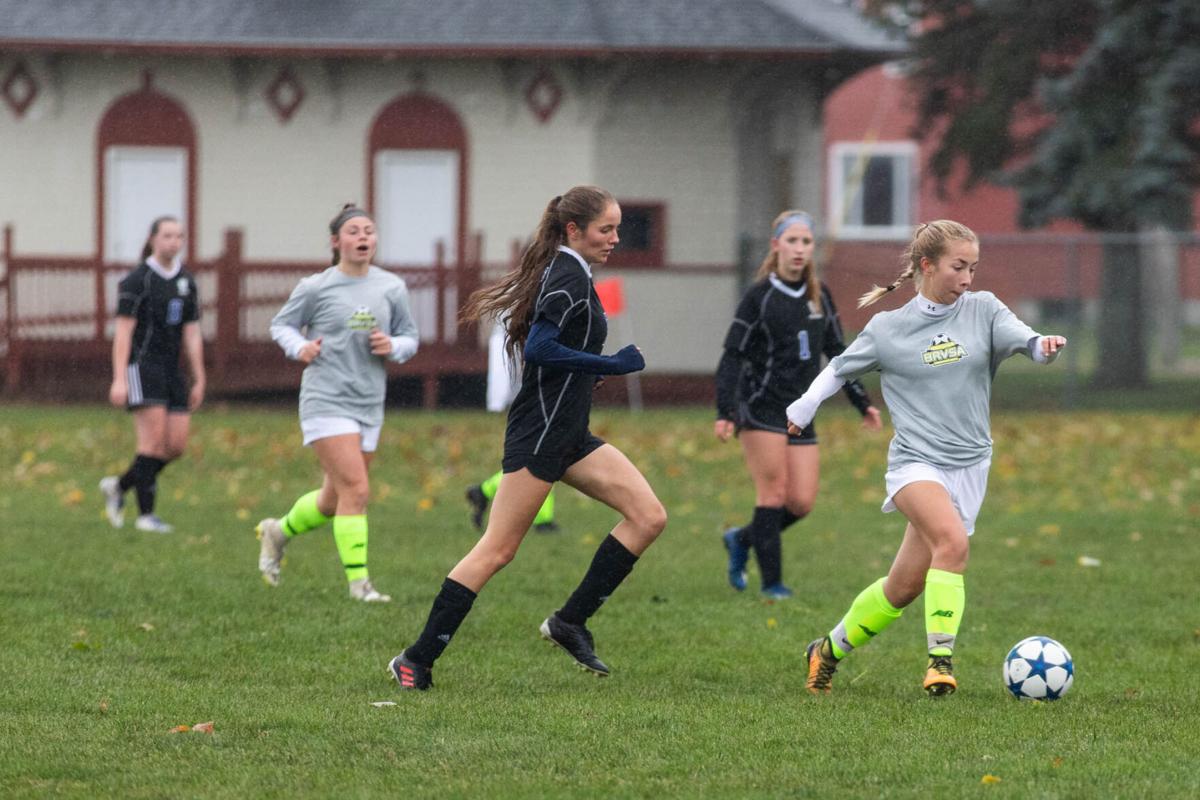 The Black River Soccer Academy traditonally runs during the high school soccer offseason. But because fall play was canceled, the academy put together a schedule for the fall. Sydney Schaefer/Watertown Daily Times

Black River Soccer Academy consists of varsity soccer players from the area who haven’t had a chance to play for their respective schools because of the coronavirus. Sydney Schaefer/Watertown Daily Times

The Black River Soccer Academy traditonally runs during the high school soccer offseason. But because fall play was canceled, the academy put together a schedule for the fall. Sydney Schaefer/Watertown Daily Times

WATERTOWN — While braving the elements on a blustery Sunday afternoon, Callie LaFontaine and her teammates happily went about their business playing soccer.

“No, not really because we’re getting to play,” said LaFontaine, when asked if she minded the weather during a rainstorm following a game at the Alex T. Duffy Fairgrounds.

Usually this time of year, local soccer teams would be in the heart of the Section 3 playoffs. But because of concerns over the coronavirus pandemic, schools from Jefferson County scrapped playing in the fall, leaving many athletes without a season.

The Black River Valley Soccer Academy, which plays games beyond the traditional high school season, has become an alternative this fall for team members, which totals 21 players.

“I didn’t really expect we going to be able to do much because of COVID and because the school canceled fall sports,” LaFontaine said. “Knowing that we got to play this with this team has been great.”

The team, which is made up of players from Immaculate Heart Central, Lyme, Thousand Islands and Watertown High School, has played several competitive games this fall.

“It’s been great opportunity,” said Kennady Amo, a senior at Thousand Islands. “When we found out we weren’t going to have a fall season it was kind of sad because I’m a senior this year. But when they put this team together, it was awesome, we got to play the best competition from everywhere, really.”

“It’s been a great experience, because we’re getting to play different teams, higher competition and it’s been pretty great,” LaFontaine said.

Black River is off to an unbeaten start at 4-0, including a 4-0 win on Sunday over the Taughannock Soccer Club, which is from Trumansburg in the Finger Lakes region.

“They will play in any conditions, this is a great group of kids,” said BRVSA coach Kurt Robbins said. “And the competition is pretty good.”

Like the BRVSA team, the other squads from the league are made up of players from several high schools, players who are intent on playing soccer, no matter the conditions.

“We play people from all over, so it’s good competition,” said Emily Bombard, a sophomore at IHC. “There are a lot of good teams, so it’s a challenge for us.”

Only soccer players from Lewis County schools have been able to play any high school games this fall before their seasons, as well, were called due to COVID cases.

All Frontier League teams waited more than a month before hearing whether they would play or not, ultimately delivering the bad news for many players.

“I was pretty bummed, I’ve played soccer since I was two,” Amo said. “And my dad (Shannon) is my coach, so I just wanted one last season with my dad, so it was pretty sad when I found out.”

The New York State West Youth Soccer Association, which includes four other teams, stepped up to form a fall league that could be solid training for the spring, if soccer is played, as currently scheduled.

“It’s making everyone a better player from when they were before. So if we do go into the spring, everyone is going to be one step ahead of the other players because coach Kurt put this together and let us play,” Amo said.

Robbins, who also coaches IHC’s girls soccer team, knew it would be a good opportunity for his players at the club level.

“These kids want to play, they come to play every day and they play hard,” Robbins said. “And they all fit in good together, they just get along great.”

In Sunday’s game, LaFontaine scored the game’s first two goals, with Katharina Probst and Kailey Montgomery each tallying a goal each in the win.

“I love the competition, we’re playing against some of the best players,” Robbins said. “And we’re getting to play some good soccer. Almost everyone on this team wants to play at the next level, the college level, so it’s good for them to get out there.”

The BRVSA team, also known as the Cavaliers, has made several road trips this fall, including going to Western New York to play the South Buffalo Soccer Club, an encounter the Cavaliers won, 5-1, on Oct. 10 to open its fall season.

“At games, they have to sit over on the opposite side of the field and we have to put marks on the field so they’re 12 feet apart and they have to wear their masks. So we’ve done all that stuff and at least they’ve got to play, they got some games in, so that’s the good part.”

The BRVSA also has teams at the U13 and U15 levels, and participation in the club at all levels has been good, Robbins said.

“We’ve had this club for probably 10 years now, but this is the first time we’ve ever done it in the fall because of COVID, with no high school sports, so we threw it together kind of quick,” Robbins said. “This is our club team, which plays in the spring, summer and during the winter. We just never played in the fall, usually by August, we stop our club team and then we take it up again in November once high school soccer is over with.”

Looking back, Robbins believes that Jefferson County schools in the Frontier League made the right call in canceling fall play.

“The biggest part with me is making sure everybody’s safe,” Robbins said. “The last thing I want is some kid getting sick on my watch and I just couldn’t handle that. If we’re going to do it, let’s do it right, let’s take all the precautions and do everything we can, so we’ll see.”

There is hope in Section 3 as well as around the state, that soccer and other fall sports will be able to be played next year in a Fall Sports II season, during which soccer would be played in March and April.

“My only take on it is, and I keep bringing it up any time we have discussions with the section and the state, is ‘does anybody know what it’s like north of Syracuse in March?’” Robbins said. “We might have a foot of snow on the ground in March. A lot of the state people who are from the New York City or Long Island area say ‘you guys all have turf fields.’ But no, we don’t.

“It’s like my old A.D. (at IHC) Mike Delaney said the other day, he said a lot of times the baseball team didn’t get on a field until April. So, we’ll see.”

For now, BRVSA players are just happy to be competing in games, no matter what the conditions.

“It’s awesome, I don’t mind this at all,” Amo said. “This is kind of like playoff weather.”

“It’s a little cold, but it’s nice to be able to play,” Bombard said.

The Cavaliers will complete their fall season with a game at the Dreyden Soccer Club on Saturday in Syracuse.