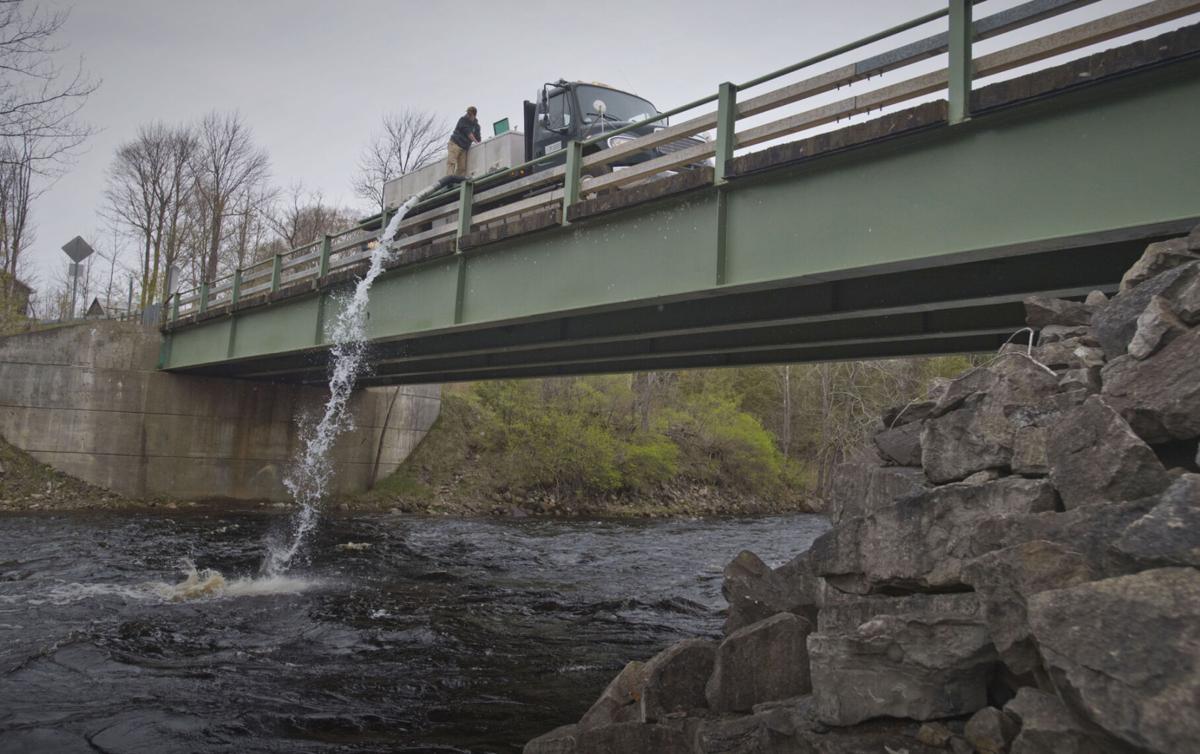 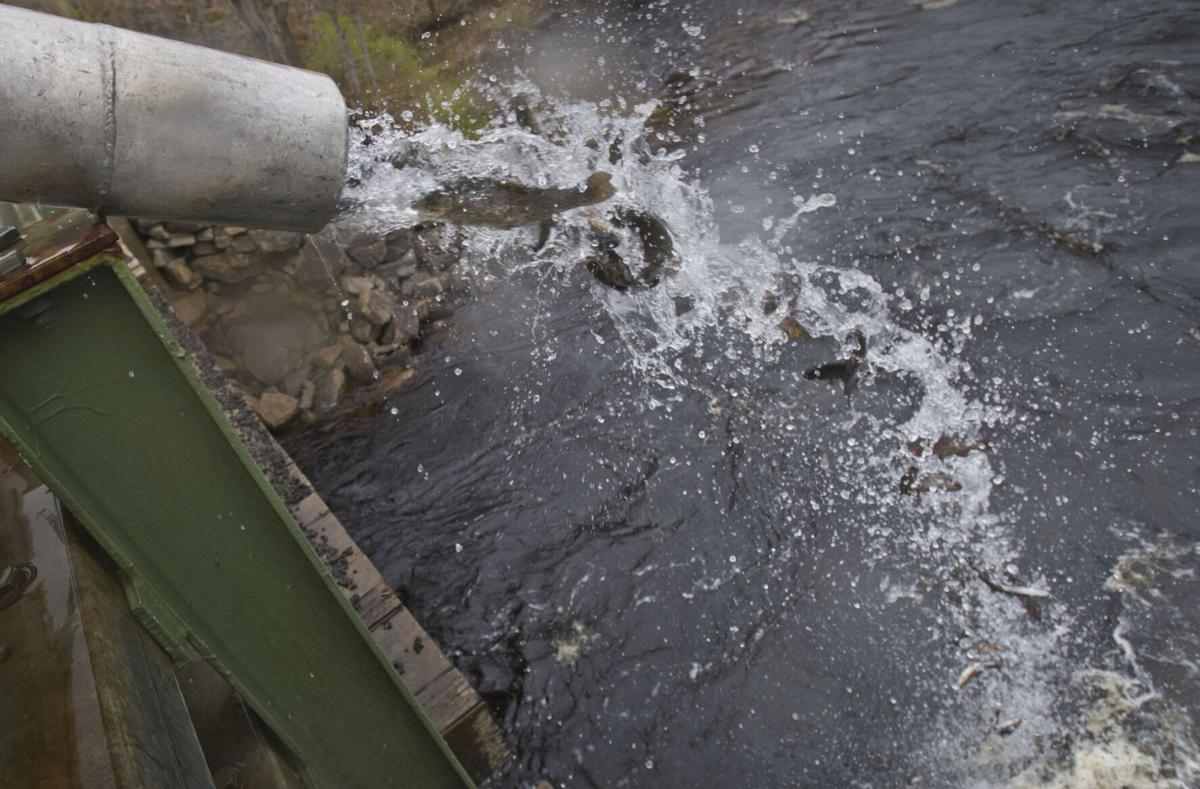 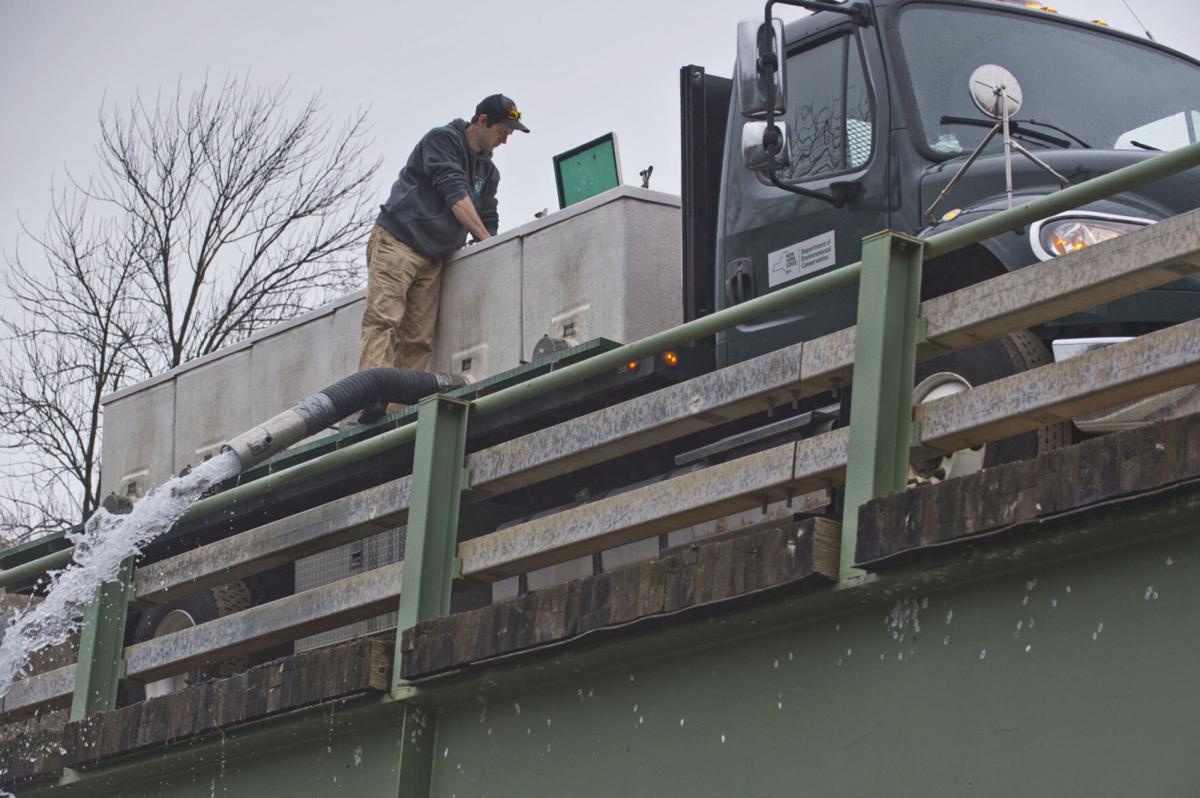 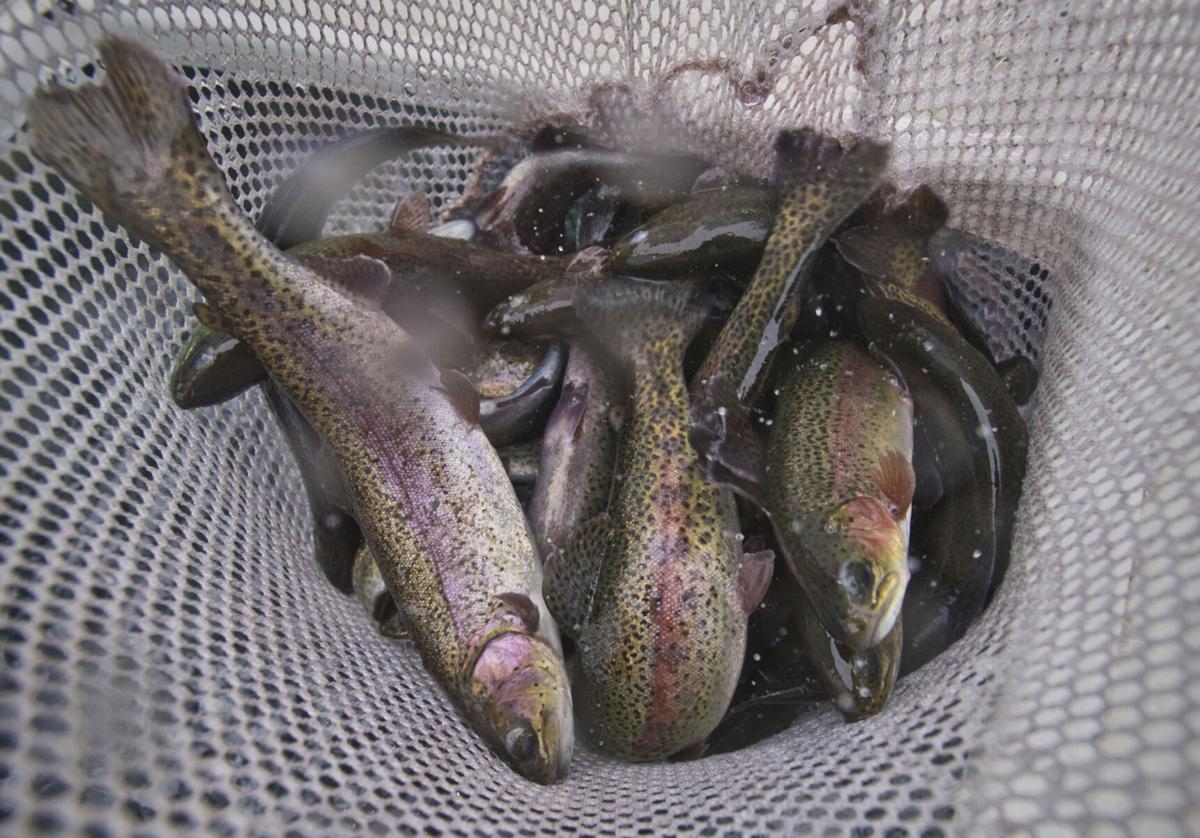 Rainbow trout raised at the Chateaugay Fish Hatchery were the stock introduced to the St. Regis River at points in St. Lawrence and Franklin counties by the state Department of Environmental Conservation on Monday. Christopher Lenney/Watertown Daily Times 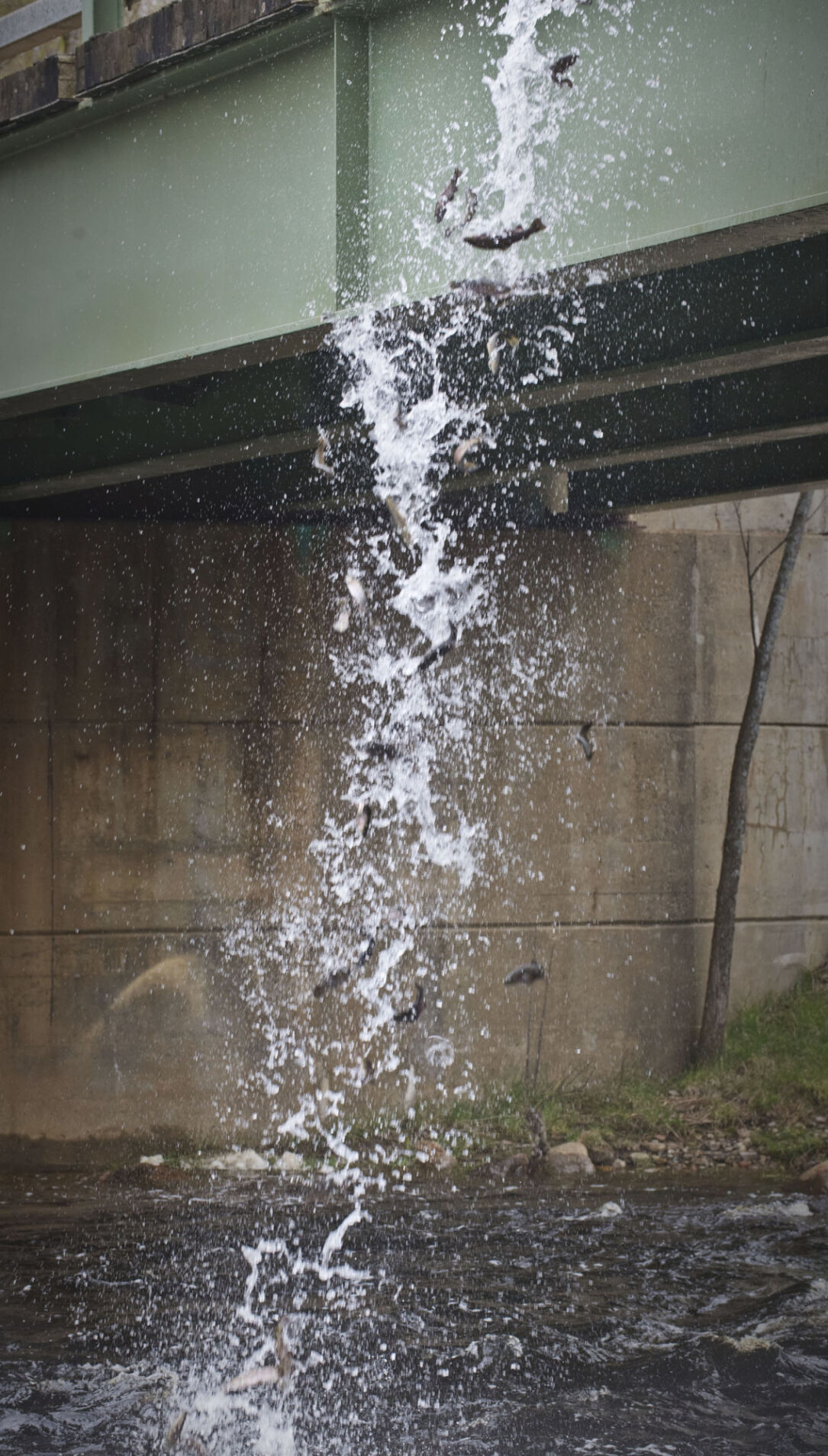 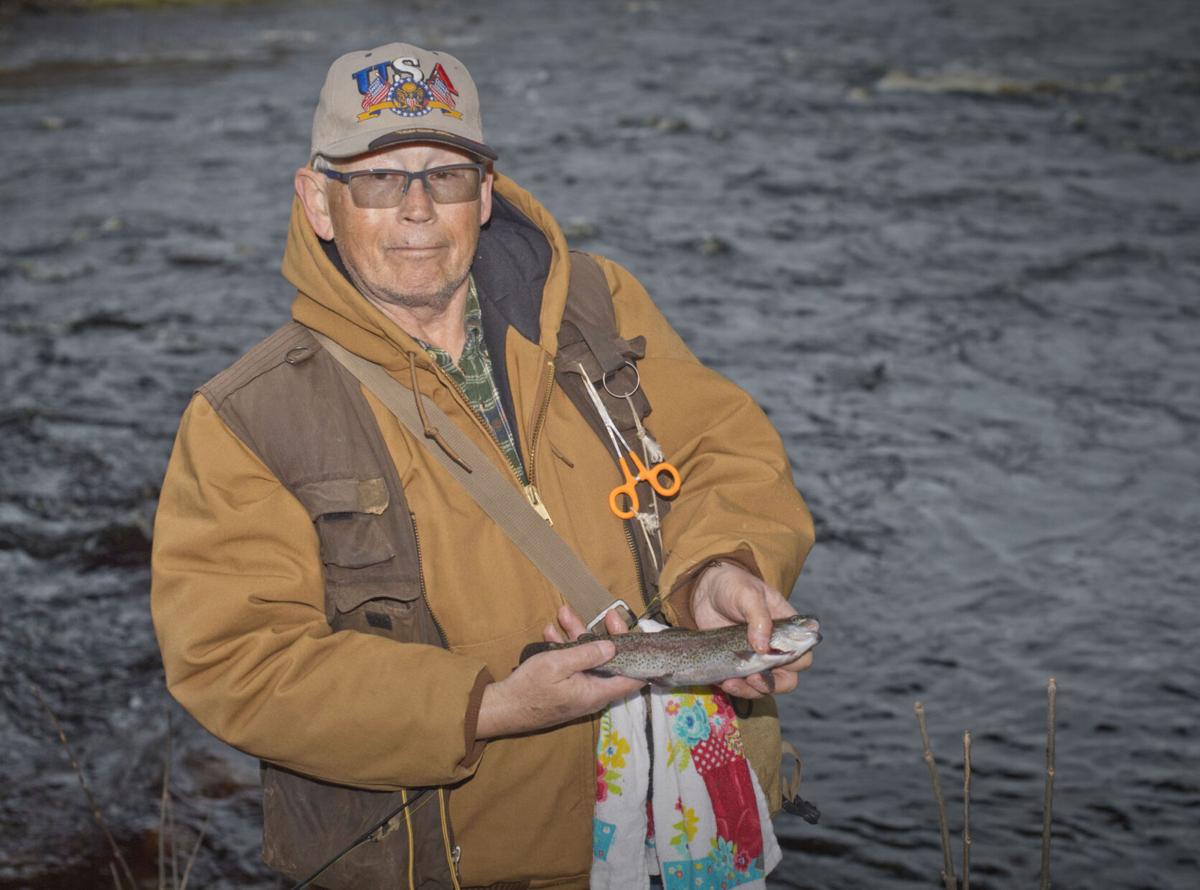 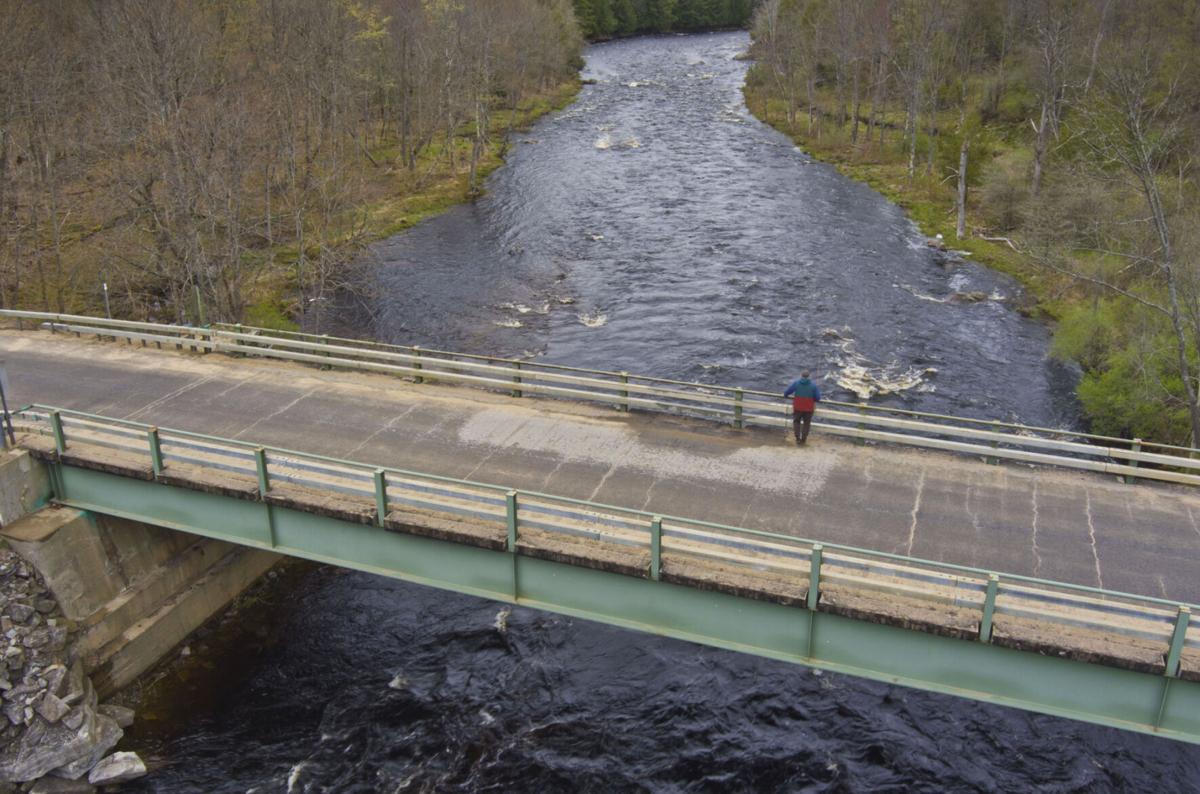 Fly fisherman William V. Krazinski Jr. looks out at the St. Regis River Monday. Mr. Krazinski, a state-licensed guide, opted not to try to wade and fish the river due to high water and a swift currant. Christopher Lenney/Watertown Daily Times

NICHOLVILLE — Wriggling and almost free, 7,800 rainbow trout were released into the St. Regis River on Monday, the region’s latest, and one of the largest, introductions scheduled for annual spring stocking.

To facilitate stocking — of trout and several other species of fish, including salmon, steelhead, walleye and muskellunge — the state Department of Environmental Conservation operates 13 fish hatcheries statewide. Secured in aerated tanks atop DEC trucks, Monday’s rainbow trout yearlings were transported some 40 miles from the Chateaugay Fish Hatchery to spots along the St. Regis in St. Lawrence and Franklin counties.

“It’s a beautiful stretch of water here,” William V. Krazinski Jr., of Horseheads, said of the spot he visits a few times a week every spring.

He stood on the Mill Road bridge about mid-way between Nicholville and St. Regis Falls, evaluating the river’s structure, its foam lines, its current, before opting not to wade through the rocks to cast his fly line. Monday’s wind picked up and the water was too high for his liking.

A state-licensed hunting and fishing guide, Mr. Krazinski owns Krazi Outdoor Adventures based in the Finger Lakes, but spends up to eight months out of the year at his camp near Chateaugay. He primarily fly fishes for trout, and has explored the mountainous reaches of Montana and Colorado.

“This matches that every bit,” he said.

The pair is part of a network of culturalists and other staff managed by the DEC Bureau of Fisheries. In DEC Region 6, which covers Herkimer, Jefferson, Lewis, Oneida and St. Lawrence counties, at least six hatcheries supply annual stockings in dozens of trips for north country trout streams, according to regional Fisheries Manager Jana R. Lantry.

Much of the north country and Adirondacks is stocked by the Rome Fish Hatchery in Oneida County, and the Adirondack Fish Hatchery in Franklin County, which specializes in raising landlocked Atlantic salmon. The Rome location is a major provider of trout, with annual production totaling nearly 160,000 pounds of brook, brown and rainbow.

Once on site, a stocking truck is typically fashioned with a hose running from the aerated tanks and positioned toward the water. The tank valves are opened, and the fish fly.

Coupled with the state’s Trout Stream Management Plan, updated after three decades this year, the spring stocking program is a legacy of American deforestation, industrialization and the introduction of European brown and Pacific Coast rainbow trout to New York waters in the 1800s. Native trout, like brook and greenback cutthroat, nearly vanished from North America — nearly.

Several states now having stocking programs, and roughly 2.3 million brook, brown and rainbow trout are stocked in New York lakes, ponds and in more than 3,100 miles of streams every year. Most streams in the state support wild trout in addition to the stocked populations, but the effort is designed to “enhance recreational fishing and to restore native species to waters they formerly occupied,” according to the DEC.

New York environmental officials had followed the same guidance for managing wild and stocked trout streams since the early 1990s, but after an updated Trout Stream Management Plan entered the final stages of approval in the fall, a 21st-century approach took effect April 1.

Ms. Lantry said stocking decisions are based on several factors, including stream size, public accessibility and a stream’s capacity to support trout and angler use. Stream reaches can only receive stocked fish, she said, if “a clear recreational benefit to the public” is identified or the reach is publicly accessible for fishing on state, county or municipal land, for example.

Wild reaches are described in the plan as less accessible and home to “the largest quantity and greatest diversity of wild trout stream fishing opportunities” in the state.

“In general, stream reaches in the Wild category do not require intensive management,” the plan reads in part. “Collectively, however, the reaches in this category provide extensive fishing opportunities for anglers willing to explore, and because overall fishing pressure is generally light, they can be sustainably managed without imposing restrictive regulations.”

At the other end of the spectrum, Stocked reaches have “significant habitat limitations,” including warmer summer water temperatures.

Wild-Quality and Wild-Premier reaches tend to be more popular among anglers and, respectively, sustain more than 40 and 60 total pounds of wild trout per acre, according to the plan.

Added to the state’s existing online DECinfo Locator, map layers of trout stream data are viewable online. Stocking details, fishing access points, season dates and regulations are all incorporated into the Locator, which includes all Wild-Quality, Wild-Premier, Stocked and Stock-Extended stream reaches in the state. The mapping of Wild reaches is expected to be completed later this year.

So far this spring, several thousand trout yearlings have been released in the north country. In Jefferson County, upcoming brown trout releases are scheduled for this week at fishing access points on Black Creek, Black River and Sandy Creek. The Black River, at the town lines of Leyden and Lyonsdale in Lewis County, is scheduled to receive 7,905 rainbow trout next week.

Two anglers joined Mr. Krazinski on the bridge Monday afternoon, both having been to the spot before.

At nearly 80 years old, James L. Uruburu, of Rochester, spends each May in his native St. Lawrence County with family.

“The only thing I’ve caught today is a weed,” he said before heading down the steep northeast bank of the river with his spinning reel.

In 10 minutes, he held a 10-inch rainbow. Mr. Uruburu said he was hoping for a brown trout and prefers to keep fish older than the stocked yearlings.

“At least it’s a fish,” he said, smiling at the iridescent pink and green hues of his catch.