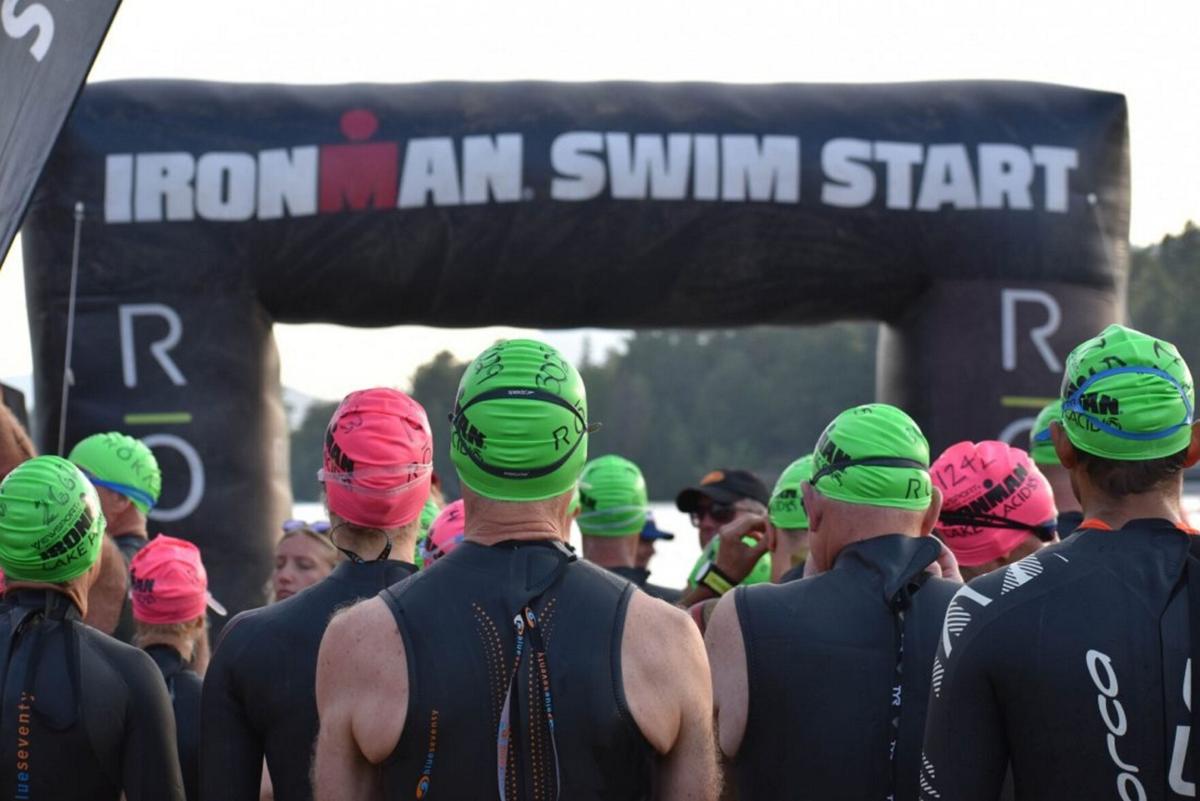 Ironman athletes line up for the swim start at the municipal beach on Mirror Lake in 2019. Lou Reuter/Adirondack Daily Enterprise 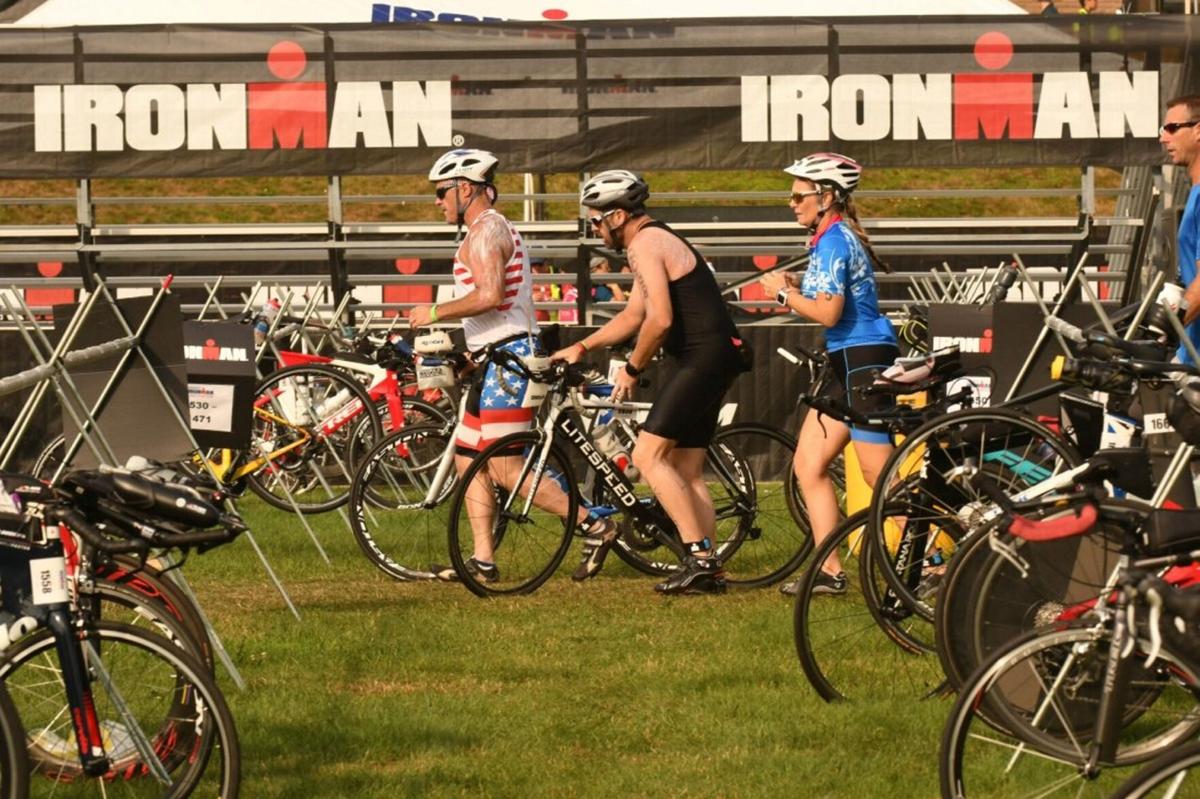 Ironman athletes transition to the cycling portion of the triathlon at the Olympic Speedskating Oval in Lake Placid in 2019. Lou Reuter/Adirondack Daily Enterprise

Ironman athletes line up for the swim start at the municipal beach on Mirror Lake in 2019. Lou Reuter/Adirondack Daily Enterprise

Ironman athletes transition to the cycling portion of the triathlon at the Olympic Speedskating Oval in Lake Placid in 2019. Lou Reuter/Adirondack Daily Enterprise

LAKE PLACID — It’s not yet clear whether there will be an Ironman Lake Placid triathlon next year.

With its contract with Ironman up for renewal, the Regional Office of Sustainable Tourism (ROOST) hosted a virtual meeting on Wednesday to gather feedback from the community on how the race impacts businesses, athletes and residents’ daily lives. Nearly 100 people attended.

The triathlon draws thousands of people to Lake Placid every summer — athletes, family members, volunteers and spectators. ROOST, the town of North Elba and the village of Lake Placid usually renew their contract with Ironman every three to five years. ROOST CEO Jim McKenna said Ironman officials would like to know whether the contract will be renewed by this year’s race, which is Sunday, July 25. But ROOST, North Elba and Lake Placid are “under no obligation to make a decision that quickly,” he said.

If ROOST, North Elba and Lake Placid agree to sign another contract, ROOST would pay Ironman $90,000 to bring the race back for 2022. Ironman, in turn, typically contributes between $40,000 and $50,000 each year to local nonprofits. Over the past 22 years, Ironman has given $1.75 million to local organizations, according to McKenna.

McKenna said ROOST sees this $90,000 fee as a marketing expense because Ironman is advertised around the world and Ironman Lake Placid’s livestream on race day has garnered more than 1 million views in the past.

ROOST’s decision to host this community call about its Ironman contract is something new. Usually, the contract would be signed after mostly private negotiations. McKenna said this call is part of ROOST’s shift toward a “destination management” approach, marketing the type of tourism that works best for both the community and the visitor.

Both proponents and critics of Ironman’s Lake Placid triathlon spoke up on Wednesday, with much of the conversation surrounding two topics: economic impact and the impact on residents’ lives.

Robert Gerken, a four-time Ironman competitor, spoke about the economic impact, saying he and his family have brought up to 16 people here on race day. While he’s on the bike loop, his family and friends have half an hour to kill, so they drink and eat at businesses along Main Street, he said. He’s had friends come to town as early as April for training ahead of Ironman.

“There’s a good three months of people coming up, training … whether they’re from New Jersey or Connecticut or as far as Ohio, enjoying our town,” he said. “This is who we are, and we need to embrace that.”

With the triathlon coming to town during the peak tourism season, Preston said she hears “frequently” from tourists who wanted to come to town but decided not to because hotel room prices rise during Ironman weekend.

“It’s more of a negative impact for us from a rooms perspective because it is very, very difficult to convince anyone not coming for Ironman that they would want to be here for that weekend,” he said. “The day or two leading up to Ironman arrivals are some of our softest of the summer.”

Jarvis added that the Inn doesn’t see much food and beverage business from Ironman, either.

“I am 100% in favor of signing an additional contract with Ironman,” Ericson said. “I can tell you that the benefit Ironman brings the other 51 weeks of the year is incredibly impactful. There are a lot of people in town, and they do spend a lot of money. The people with the athletes spend even more money because they’ve got an entire day to kill.”

Ericson said he thinks Ironman fits Lake Placid’s brand, too. Regarding the argument that 2020 showed Lake Placid can survive without Ironman, Ericson said he doesn’t know a lot of people who would say 2020 wasn’t an anomaly.

“I don’t think we can rely on data from 2020 to make decisions on the efficacy of events,” he said.

After hearing some of the comments from residents and business owners, Ironman Regional Race Director Scott Langen said Ironman is “always willing to work on issues with local communities,” and cited an independent study that showed the triathlon has a $13 million economic impact.

“We’re bringing 2,000-plus families to town,” Langen said. “This is one weekend that you can rely on that has a direct impact on the community.”

Residents were mixed on whether they felt Ironman should return.

Ann O’Leary, a longtime Lake Placid resident, said the first Ironman was fun but over the past 22 years, it’s gotten much less fun.

“My marriage didn’t last this long,” she said. “It’s no longer a good thing. It’s worn out its welcome.”

O’Leary also shared her concerns about Ironman’s transparency. She said she didn’t know this year’s route had changed until recently, and that the athlete transition area is now going to be at Northwood School, across from her property. When she found out, O’Leary said she had a hard time figuring out how to reach someone at Ironman to speak to about this.

“I would say it’s time to end this,” she said. “Last year we found we could do just fine without this massive event that holds this town hostage.”

Colin Delaney, a past Ironman competitor and New York Ski Educational Foundation jumping coach whose parents own High Peaks Cyclery, said he thinks Ironman brings “a little bit of inspiration” to local youth. He shared his perspective with an aside that he believes his “opinion is moot because (he) has a pretty strong interest in Ironman staying,” with his family owning a bike shop.

“I think there’s a lot of benefit from just having the event in our community,” Delaney said. “It’s definitely a complex issue and I don’t discount that. I’d like to see it stay.”

Andy Borden, a Lake Placid native, former member of the Lake Placid Police Department and now a pastor at the New Hope Church, said the triathlon does have an impact on local law enforcement but “it’s planned for and dealt with.” As a resident and pastor, he finds it’s “extremely difficult” to get to church on Station Street when Ironman is in town.

“I’m against renewing it only for the fact that our town, our area is set up to be able to sustain itself very well in the economy,” Borden said. “If people on this call think Lake Placid can’t survive without Ironman, they’ve got to pull their heads out of the clouds.”

Borden said Lake Placid “always knows how to get by” and it’s an “awesome destination to visit,” even without the triathlon.

Heidi Roland, of Hillcrest Avenue, thanked ROOST officials for the Ironman discussion and said she’s concerned about the transparency of the race and the true costs of the event to the community.

“Ironman is a marketing machine operating for their own profit center,” Roland said. “Lake Placid needs to know what we really want to be in this changing world.”

Shoe noted how her neighborhood has fallen victim to short-term vacation rentals.

“We have become so numb to our neighborhood being a tourist strip of rental houses and activity we barely remember true residential experience,” Roland said. “All large events as a whole must be discussed as a whole. Ironman contract should not be renewed for more than three years until this can be decided.”

Julie Dupont-Woody, a resident of Keene, said she lives along the Ironman route and watched her first Ironman in 2009 when she purchased her home. She plans to compete in this year’s triathlon.

“I was hooked from the second I saw the swim start. Ever since then, we’ve just been going to watch the athletes in both Lake Placid and from our house in Keene,” she said. “For me, this event has been really important for our life in the North Country. I know that I’m just a resident, but I feel like there’s two iconic Ironman courses in America, in Kona and Lake Placid.

“When my family and I saw the volunteers in Ironman Lake Placid, we really just felt like we made the right choice in buying a house here,” she said. “I believe that Ironman, overall, has been positive for the community.”