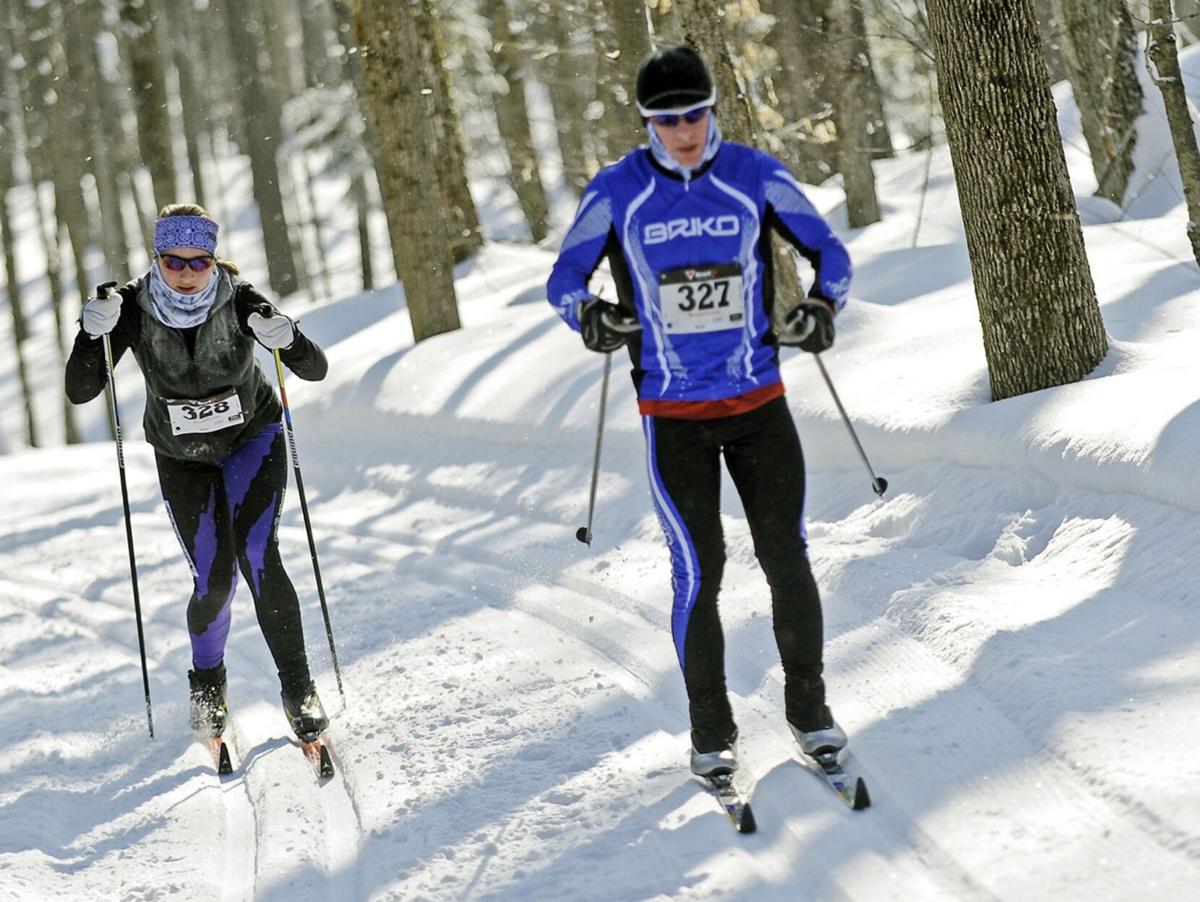 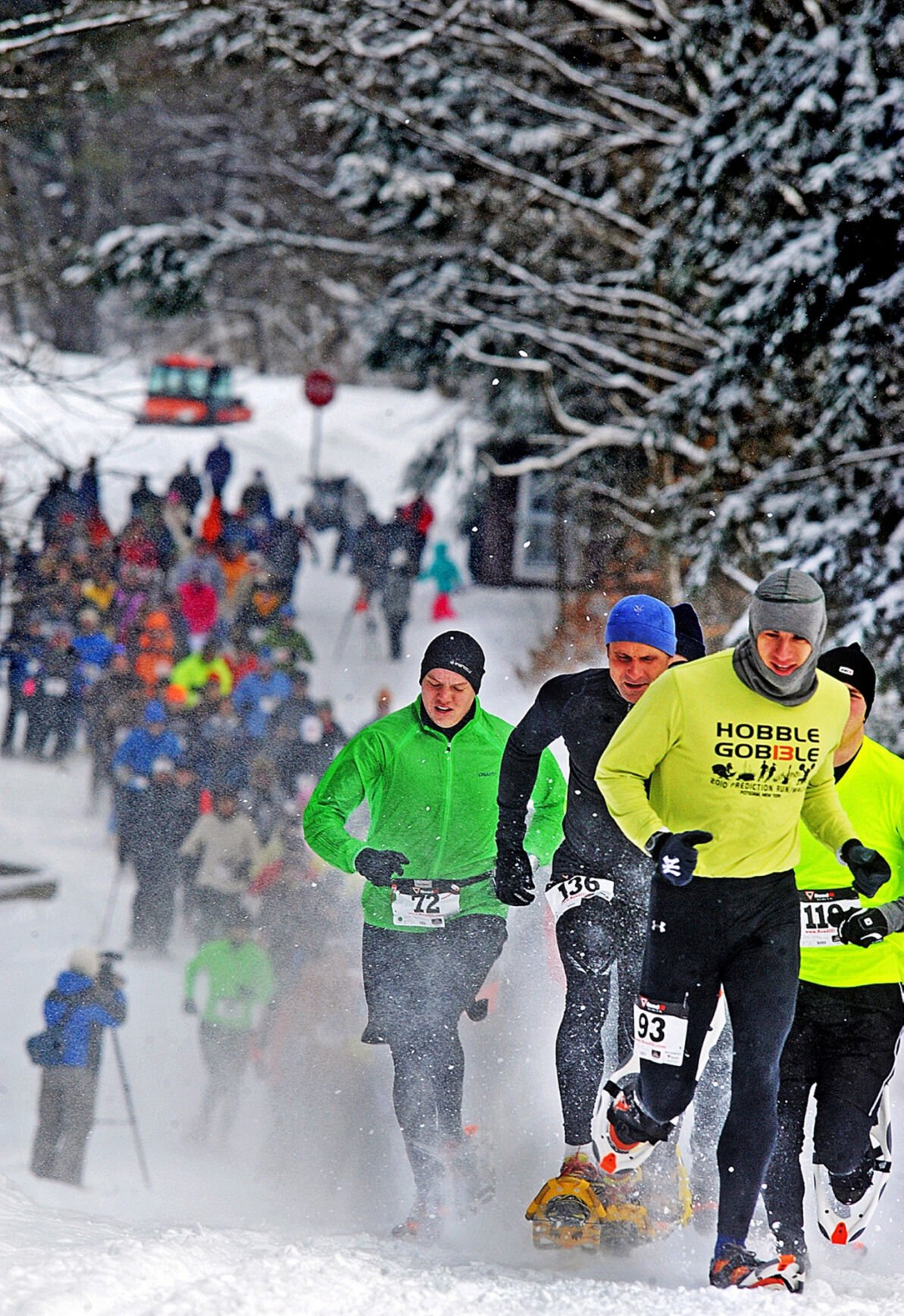 Snowshoers take off at the start of the Winona Stone Wall 5 Kilometer Snowshoe Walk/Run in 2014 in Winona Forest State Park. Watertown Daily Times 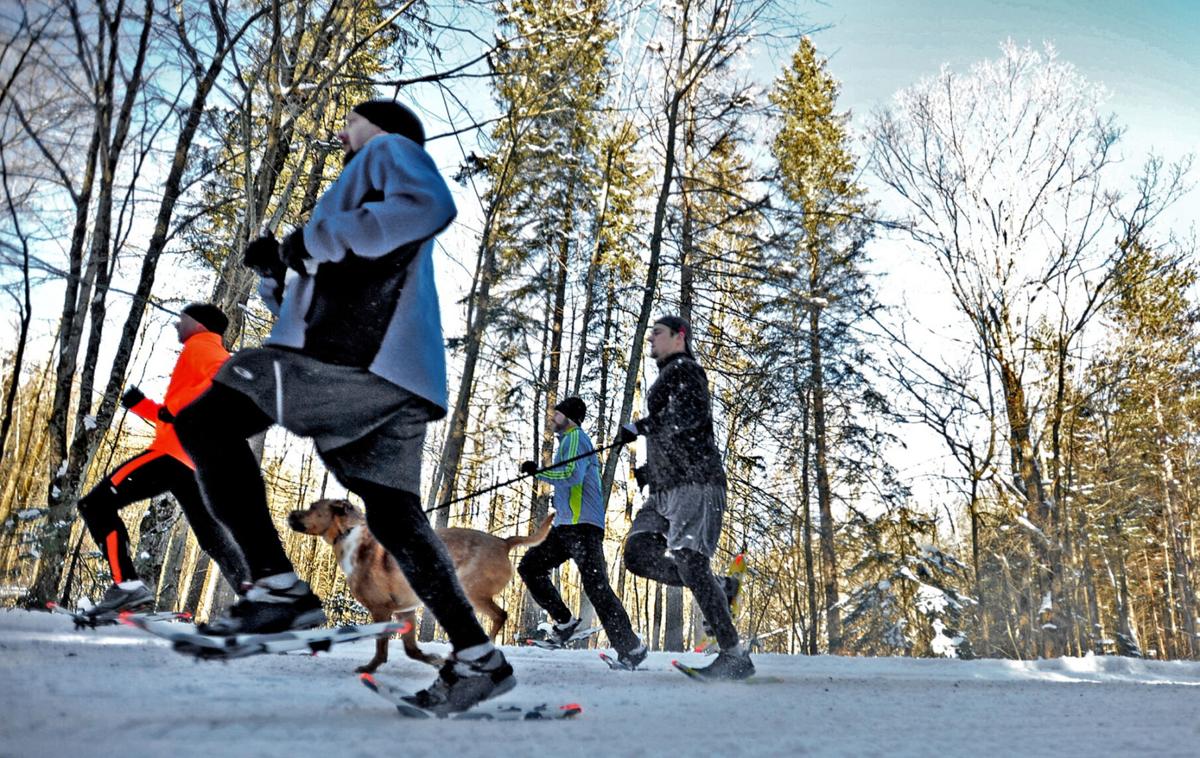 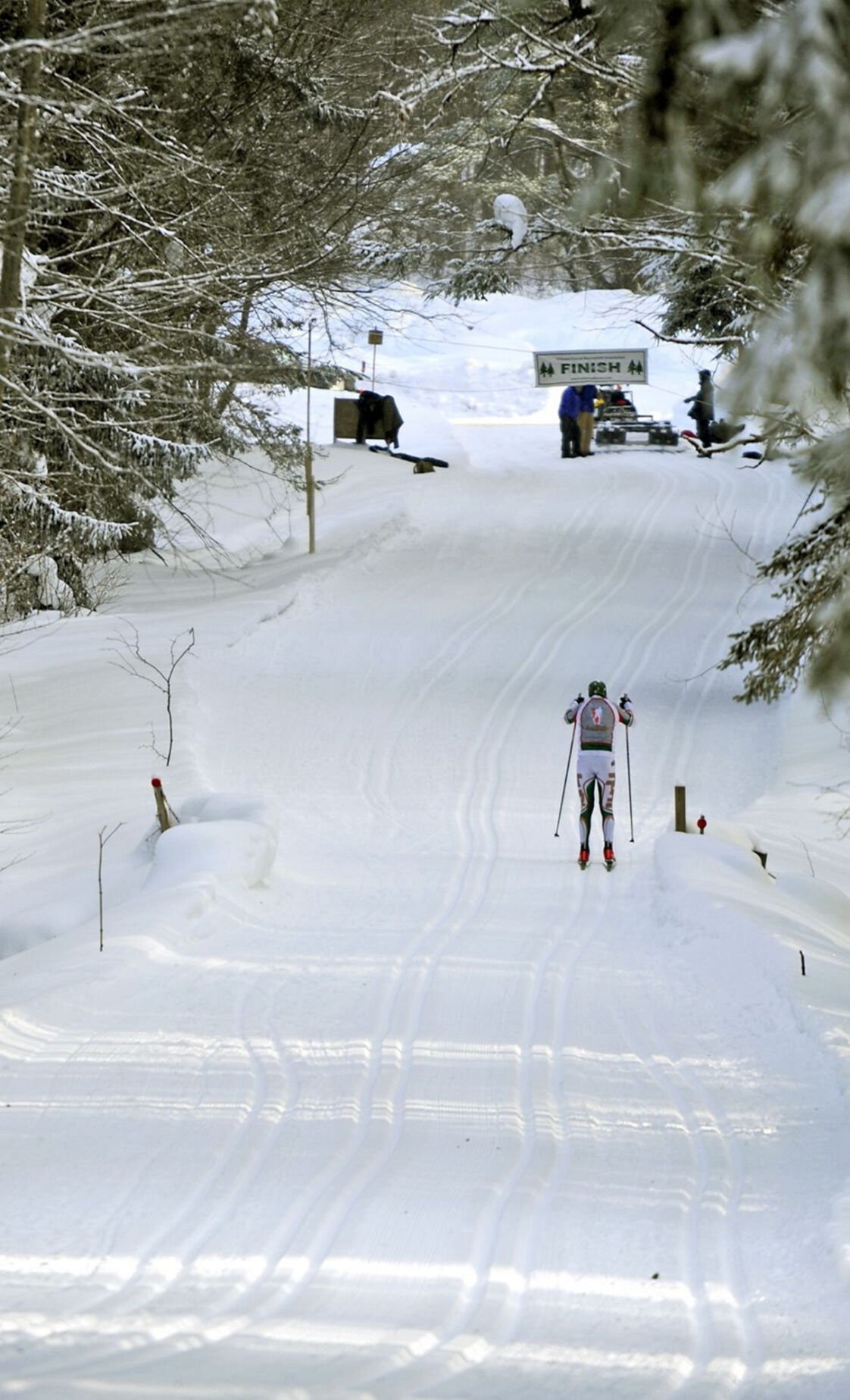 Aaron Huneck returns to the start during the 25K race at the 35th annual Winona Tourathon in 2015. Watertown Daily Times 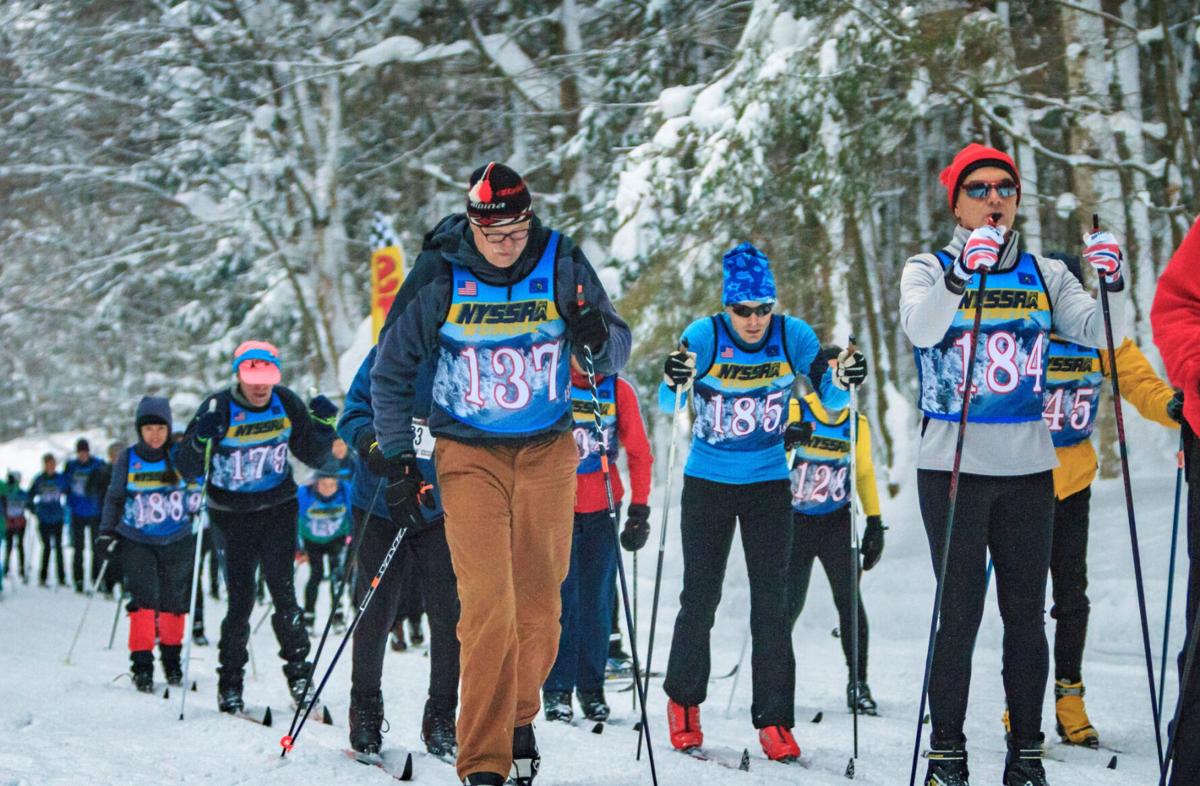 Snowshoers take off at the start of the Winona Stone Wall 5 Kilometer Snowshoe Walk/Run in 2014 in Winona Forest State Park. Watertown Daily Times

Aaron Huneck returns to the start during the 25K race at the 35th annual Winona Tourathon in 2015. Watertown Daily Times

To Matt Westerlund, the president of the Winona Forest Recreation Association, the Winona Forest is his playground. And he, along with the entire WFRA, has worked to make it as enjoyable for the public as possible.

The Winona Forest, ranging from northern Oswego County to southern Jefferson County, is a haven for New York winter sports like snowshoeing, cross country skiing, snowmobiling and fat bike riding. And on Jan. 23, its 2021 season will kick off with the Try-It 12.5K cross country ski race, which will be followed by the Tourathon — a ski race of 12.5K, 25K or 50K — on Feb. 6. In between will be the Stone Wall snowshoe race, ran as a 5K or 10K, on Jan. 24.

Registration for all those events is currently open and can be accessed at winonaforest.com

As of now, the plan is to hold the events in person, but cut each individual race off at 50 participants to allow for more social distancing.

While events like the Tourathon and the 10K Stone Wall race could be quite intensive, races like the Try-It gear toward being family friendly.

“I think it’s important to get all of our families out there doing activities, there’s a lot of children that haven’t been exposed to winter activities so it’s a nice time for them to get out,” Paula Yerdon, WFRA ski race director, said.

This will be the first Try-It race the WFRA is hosting since 2013.

“We just have so many miles of trails and we have amazing grooming teams that go out,” Yerdon said. “We all have a passion for the forest, we all want to make it the best that it can be. It really is a year-round place for people to go and explore, whether it is hiking or biking or riding horses. We have people who are volunteers do trail work, we just have a really nice family of people who work on the trails.”

“Another difference between our race and other snowshoe races, I have access, because of the Winona Forest Association, to grooming equipment,” Westerlund said. “We have utility snow mobiles and what we called single track trail groomers, which are just narrow groomers for fatbiking and snowshoeing. The course I can create with these machines, all of that is funded by these events. That is the way the Winona Forest gets its money to be able to do that.”

Fortunately for the WFRA, participation in its events often reaches 100-200 people with varying degrees of experience. For Westerlund, that last part is key, his races aren’t just geared toward those looking to win. While that type of participant is welcomed, those new to winter sports are encouraged to sign up as well.

On the Stone Wall race day, the trail is filled with those running, jogging and walking.

That mentality is self-serving. For some, the snowshoeing is contagious and if someone new to the sport likes it enough, it could grow among his or her circle.

“This is a tough sport and when you’re in the midst of it, no one is thinking that it’s easy,” Westerlund said. “Especially people who are really challenging themselves. But it’s primitive and it’s grass roots. Everyone has a circle of people who they’re trying to inspire to come out and try this.”

That’s what Westerlund envisions for his snowshoeing marathon, a new series the WFRA is offering this winter. Over the course of the season, participants will have to complete five different courses of varying length and difficulty.

“So, what I really wanted to do is allow people the opportunity on their own time, on their own schedules to see other parts of the forest,” Westerlund said. “To know and to get to experience the other trails. Because a few of the trails are brand new, so even if you’re someone with some familiarity with Winona Forest, probably not with these new trails and they’re fantastic.”

Westerlund is an avid snowshoer, who has participated in the sport for years. But the events that the Winona Forest Recreation Association put on aren’t just for competition. It’s for people of all ages and experiences to enjoy the Winona Forest.