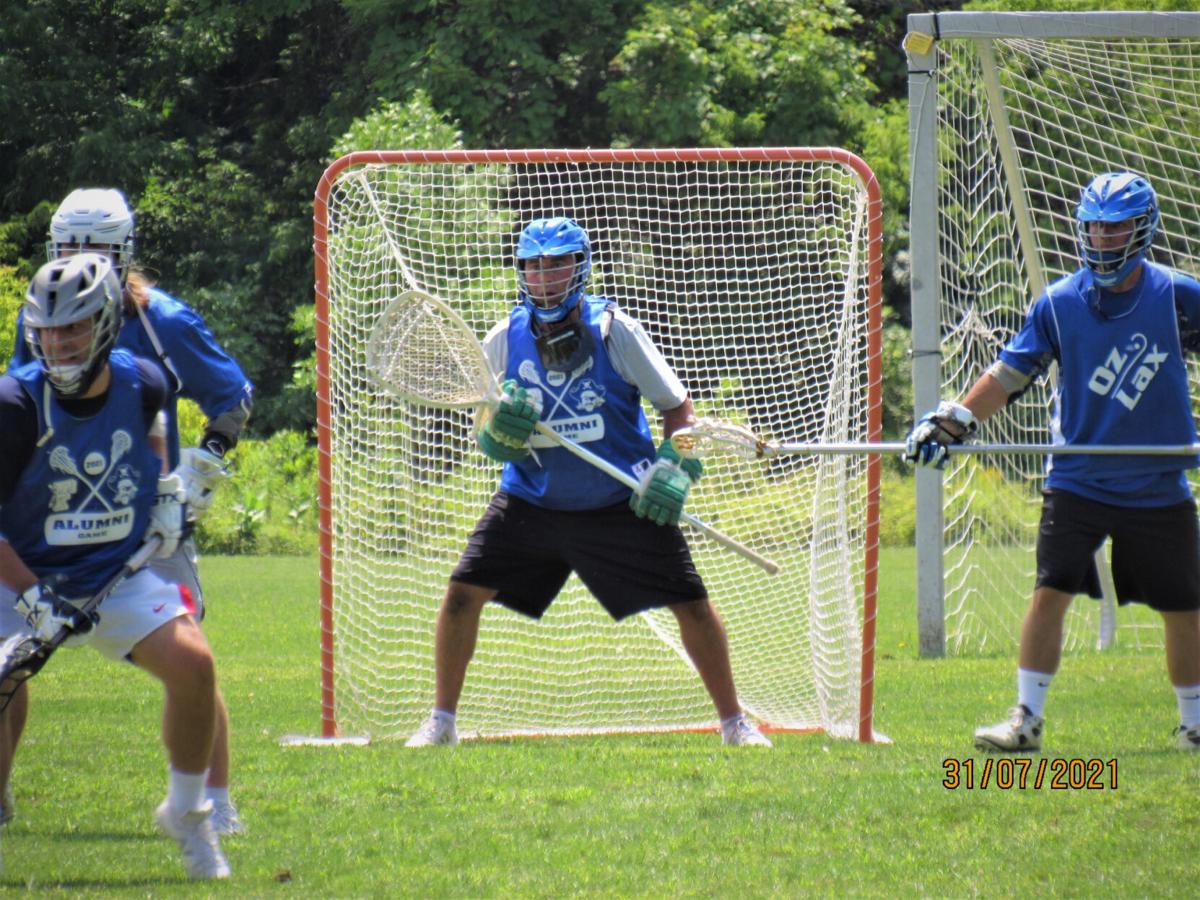 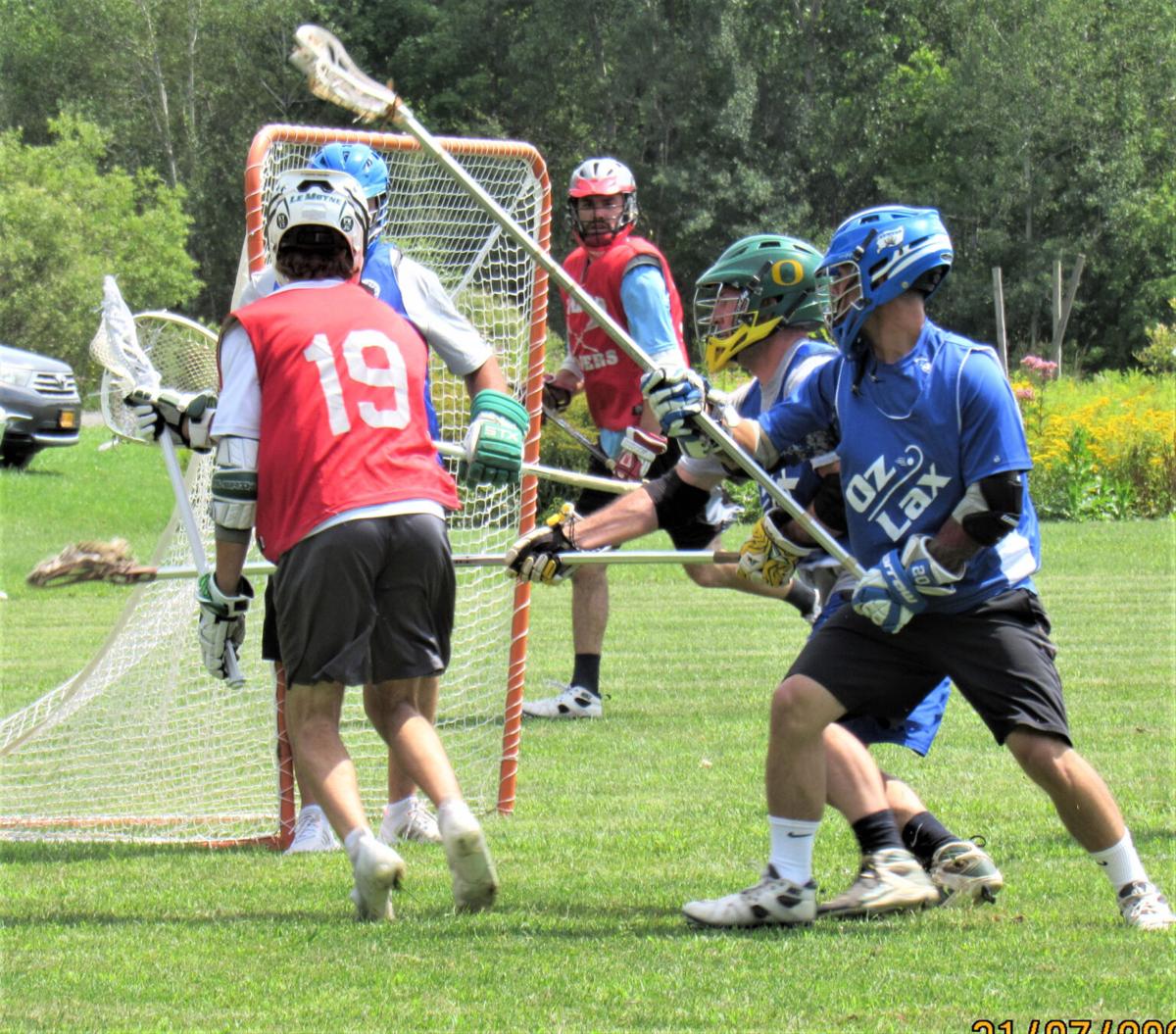 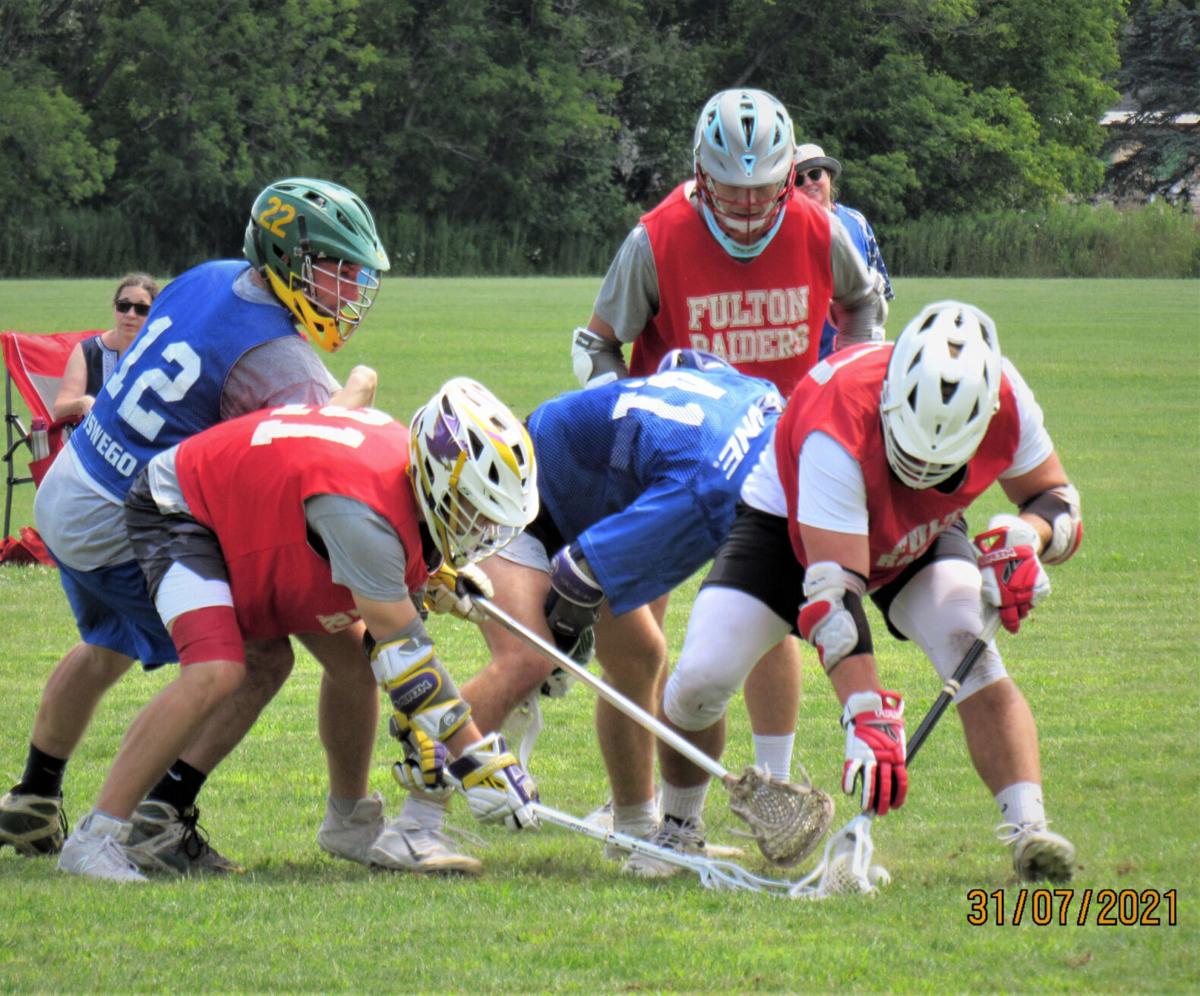 FULTON — Joe Ingram showed up for his first lacrosse game in about 30 years, borrowed a goalie stick from coach Robert ‘Doc,’ Nelson, and dazzled his peers with save after save en route to Most Valuable Player honors.

Ingram’s surprise performance was one of the many highlights of the men’s lacrosse alumni game held last Saturday in which former players from Oswego High School and Fulton converged to celebrate their on-field rivalry and offseason partnership.

Ingram helped the Buccaneers to a 9-7 victory in the second summer alumni game between the two programs featuring former players from each side spanning more than three decades, many of whom are still active in the sport.

“This isn’t a competitive thing as much as a program-building thing,” said 2008 Oswego High School graduate, Brian Witmer, who coaches the Czech Republic men’s national team and played in the alumni game while visiting home.

“We want to establish that lacrosse is a sport you can play the rest of your life,” he added. “Playing lacrosse at Oswego, there aren’t a ton of us, but for those guys who want to play pretty much until you die, you can do that. This game really showed that.”

Ingram quickly became the talk of the game and collected 15 saves to garner MVP honors. The 1990 graduate was the oldest player to suit up for the Buccaneers and was described by Nelson as the difference maker while Witmer declared him as the best player on the field.

“Joe was in the right position and got a stick on absolutely every shot,” Brian Witmer said. “The goals (Fulton) scored, he was still on it, but sometimes good shots just go in from a defensive breakdown. He told me that he hasn’t played in 30 years, and I don’t believe it, he could probably still play somewhere. His game was amazing, I was blown away.”

Schultzkie scored to give Oswego a 5-4 halftime lead and they scored three straight after the break to maintain their advantage.

The action was fast-paced and former players provided a quality, competitive outing for the other alumni and fans in attendance as opposed to a carefree exhibition. Most arrived an hour before the game was set to begin.

“Sometimes alumni games can turn into like the NBA All-Star game, where it’s showboating and nonsense, but these guys played serious the entire time,” Nelson said. “It was hard, it was physical, a little chippy at times, but a 9-7 game that could have gone either way down to the end.”

Both teams consisted of roughly 18 players from a mix of generations. Oswego featured about 10 players in their mid-30’s and older, along with eight players that graduated in more recent years.

Derek Kohut — a 2019 Oswego graduate who plays defense for Division II Mercyhurst — said that he enjoyed blending the styles of lacrosse played by alumni of different eras, down to the major contrasts in equipment.

“I noticed just looking at sticks during the game,” Kohut said. “When you look at the sticks of the guys playing from the 1980’s and 1990’s and then look at my stick, they’re just two totally different things, and it’s amazing to see them still out there scoring goals, still making plays, just being able to mesh some older and newer styles of lacrosse was really cool.”

Kohut was also one of several players that was eager to reconnect with former teammates. He recalled making a play on defense to knock the stick out of an opponent’s hands and hearing his former classmate on the sideline, Huck Fitzgerald, cheering him on.

“I heard him going bananas on the sideline and it just brought back memories,” Kohut said. “In high school, we started on defense together since freshman year, so to be able to go out and play with him again and the guys I graduated with was awesome.”

The group also held a moment of silence for Carter Vashaw, a former player that spent time with both programs who died on July 15 after battling Diffuse Leptomeningeal Glioneuronal cancerous tumors. They also honored Dominic Sciacca, a former Fulton player who died of brain cancer in 2017 at age 19, with the silent pause and brought their jerseys out to include both in the group photo afterward.

The event was capped off by a gathering at Chubby’s Sports Bar & Grill in Fulton.

Nelson fittingly walked in and first saw Mike Parkhurst, a former volunteer coach from Fulton who helped Oswego launch its first boys lacrosse team at the modified level in 1984. Nelson said that the pair hadn’t seen each other since working together for that inaugural season nearly 40 years ago.

The group of about 20 combined alumni for both teams ate food, watched the Boeheim’s Army team of Syracuse men’s basketball alumni play in The Basketball Tournament, and shared stories about their high school lacrosse playing days.

The programs are planning for the game to be played on July 22 next year and are also exploring options to hold combined alumni pickup games this fall.

“We just had a great time talking and reminiscing, and I think the players loved it,” Fulton varsity coach Aaron Koproski said. “The alumni were very appreciative and said they can’t wait until next year and they want to do more things like this, and that’s great because this was for them. That’s what this is all about.”