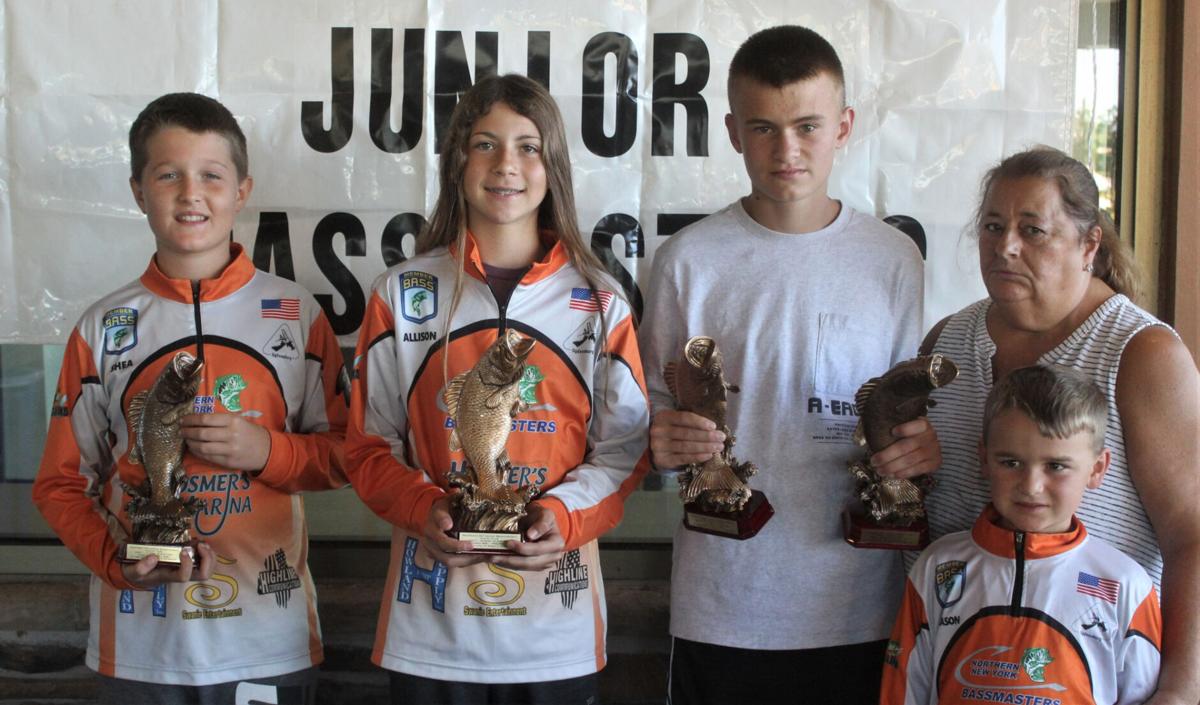 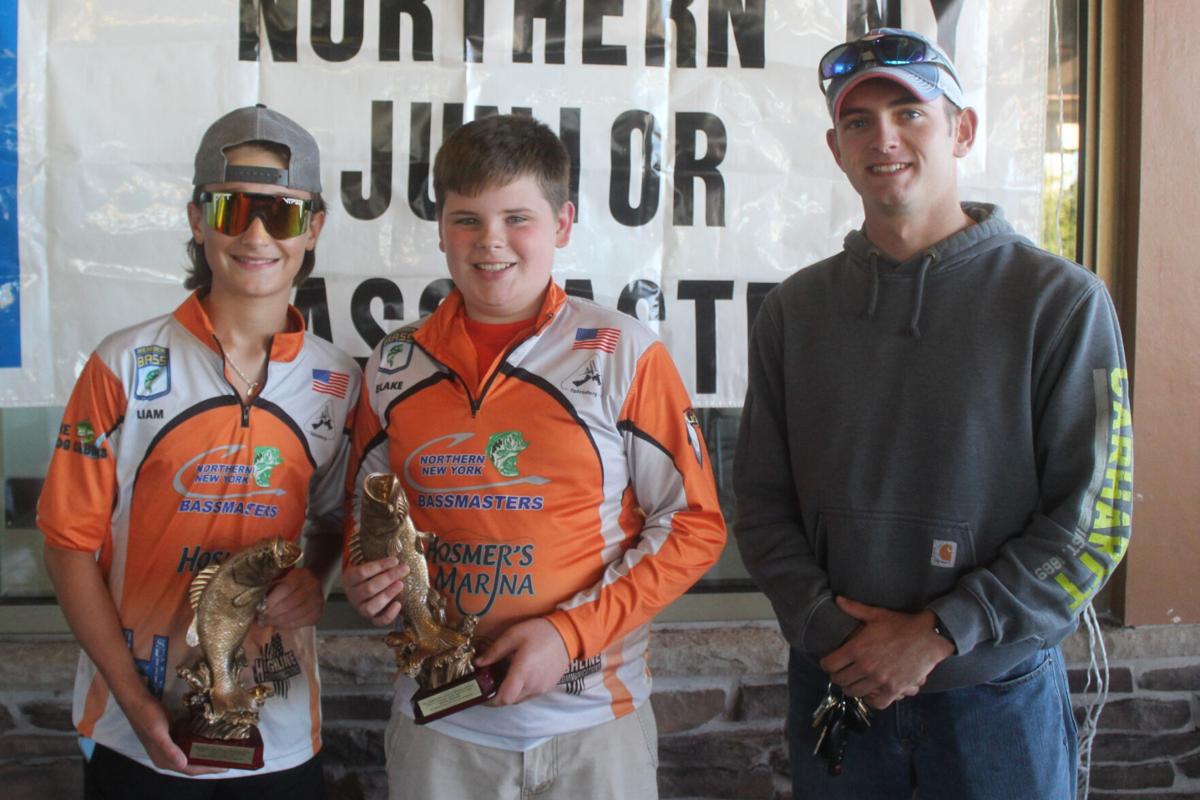 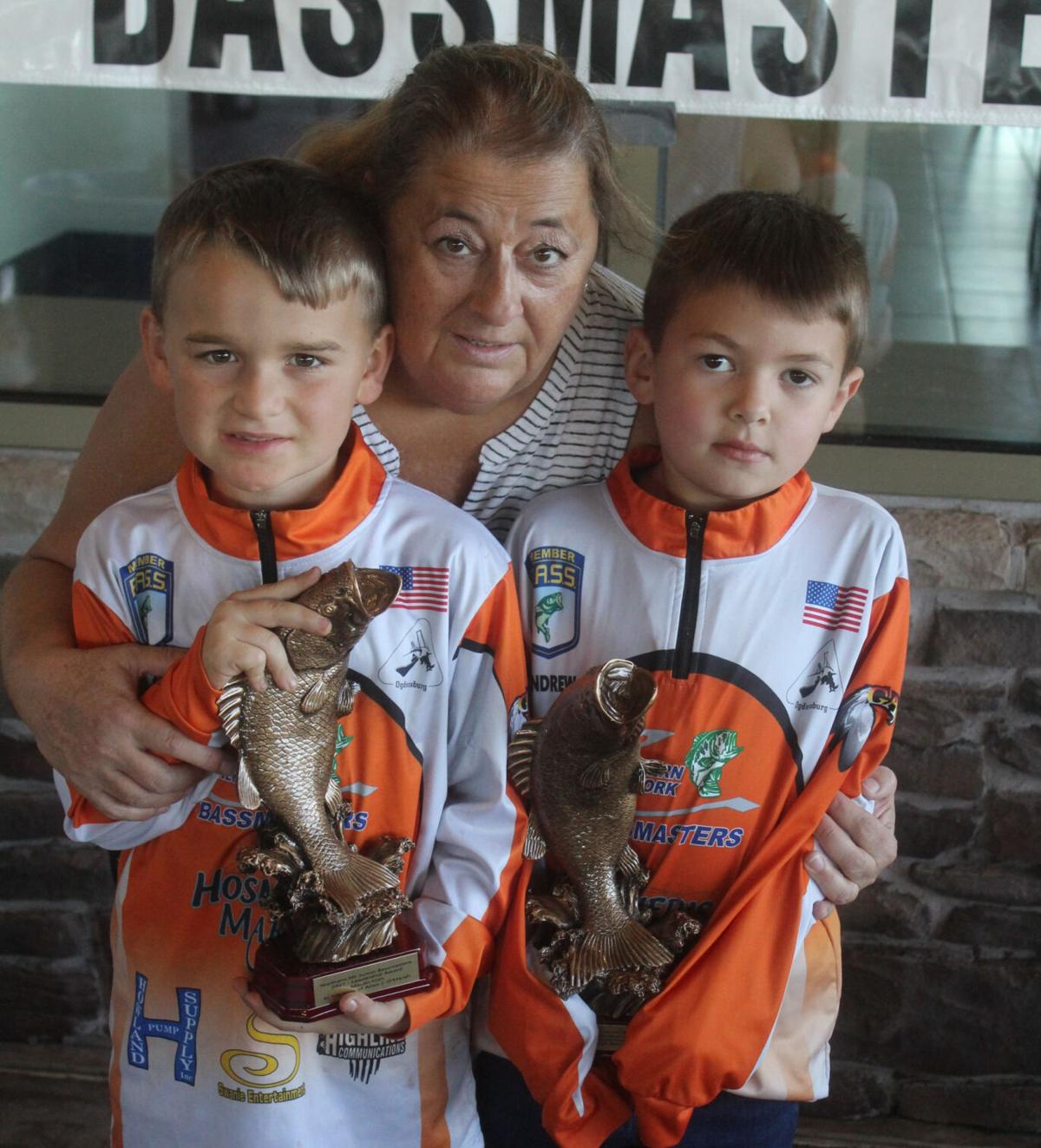 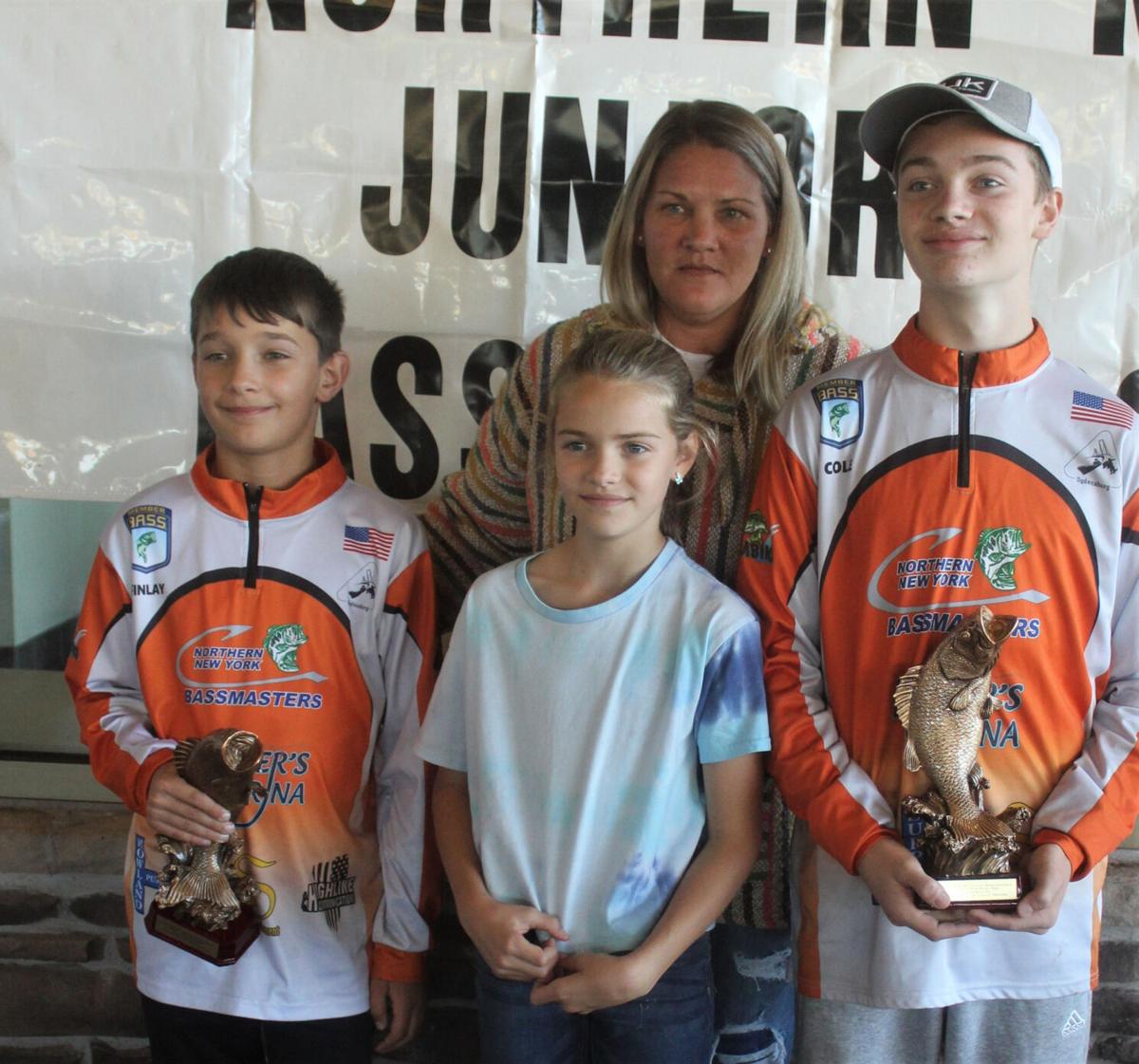 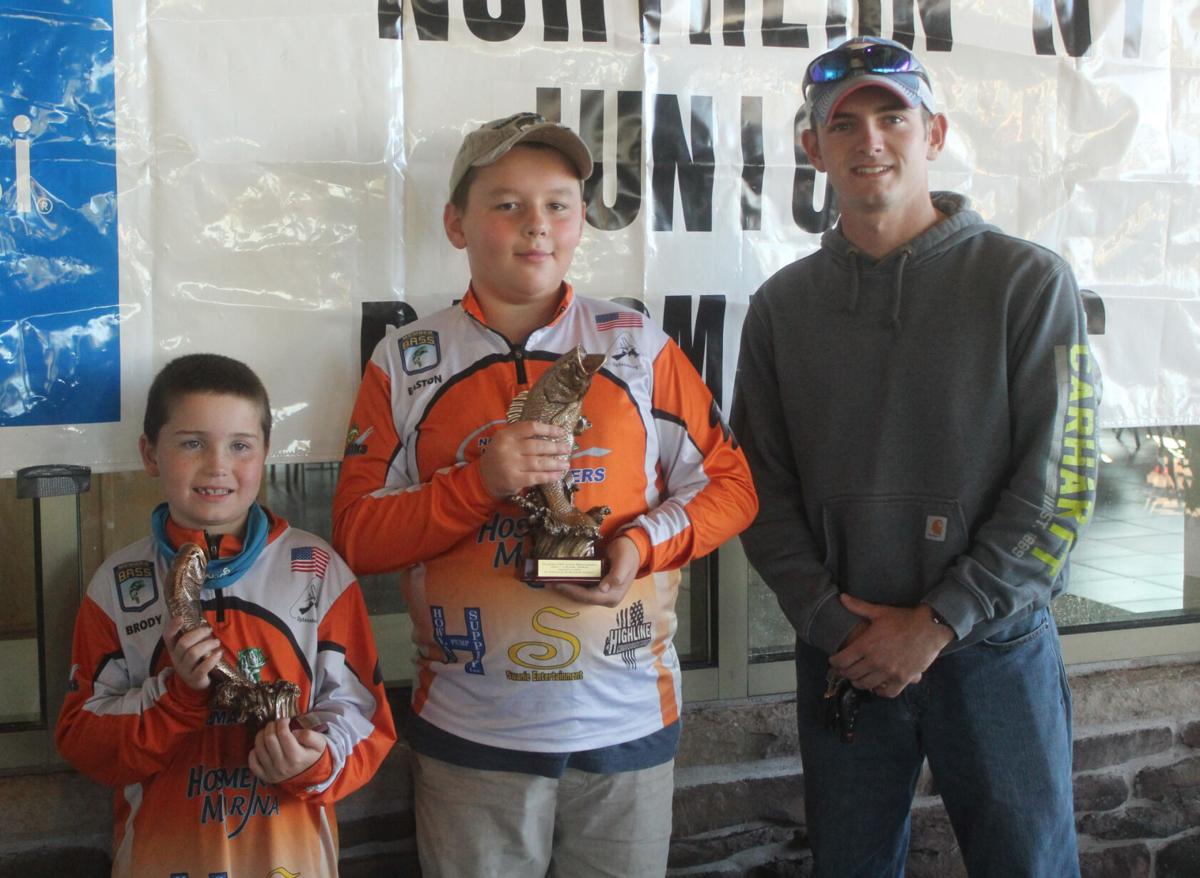 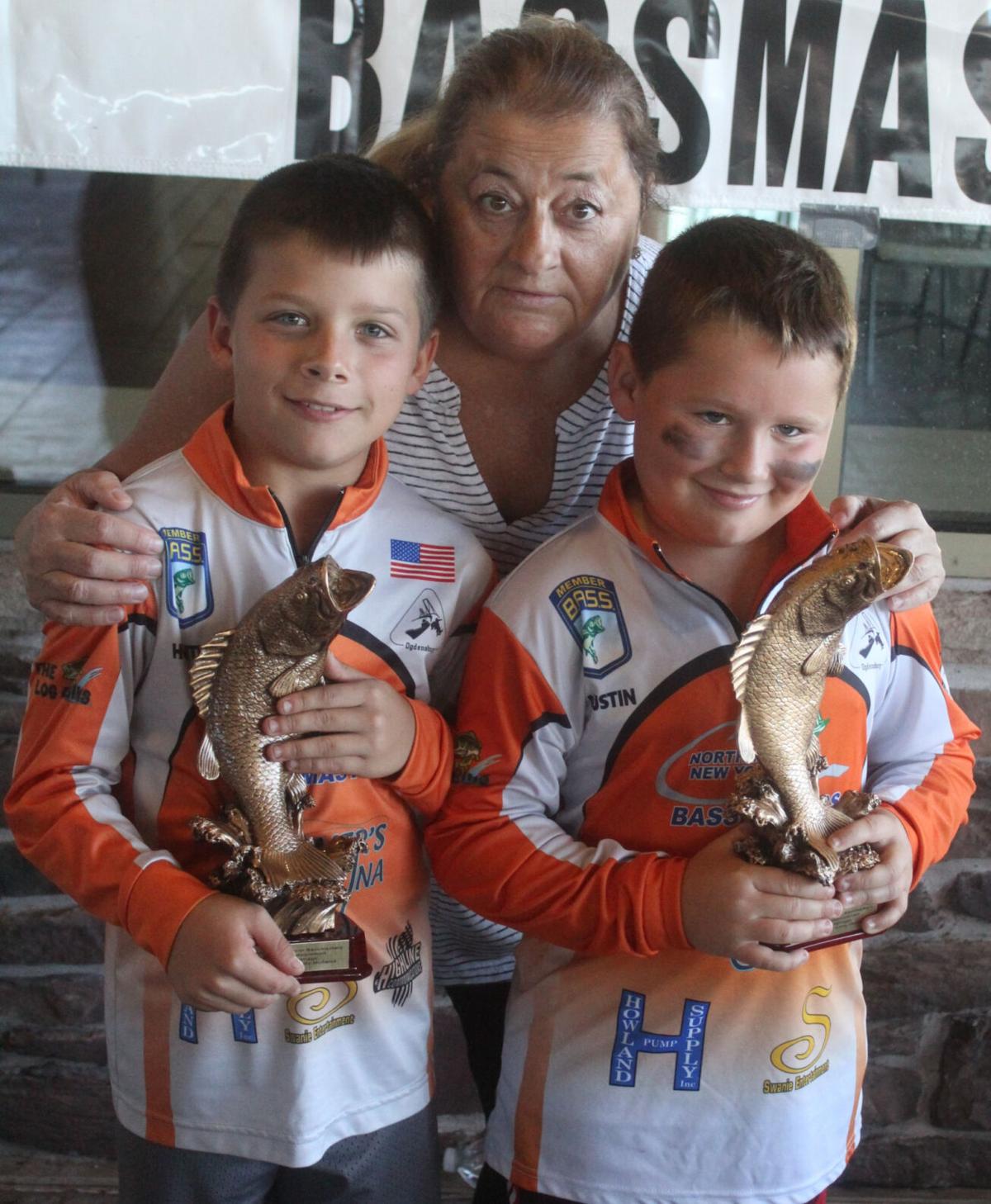 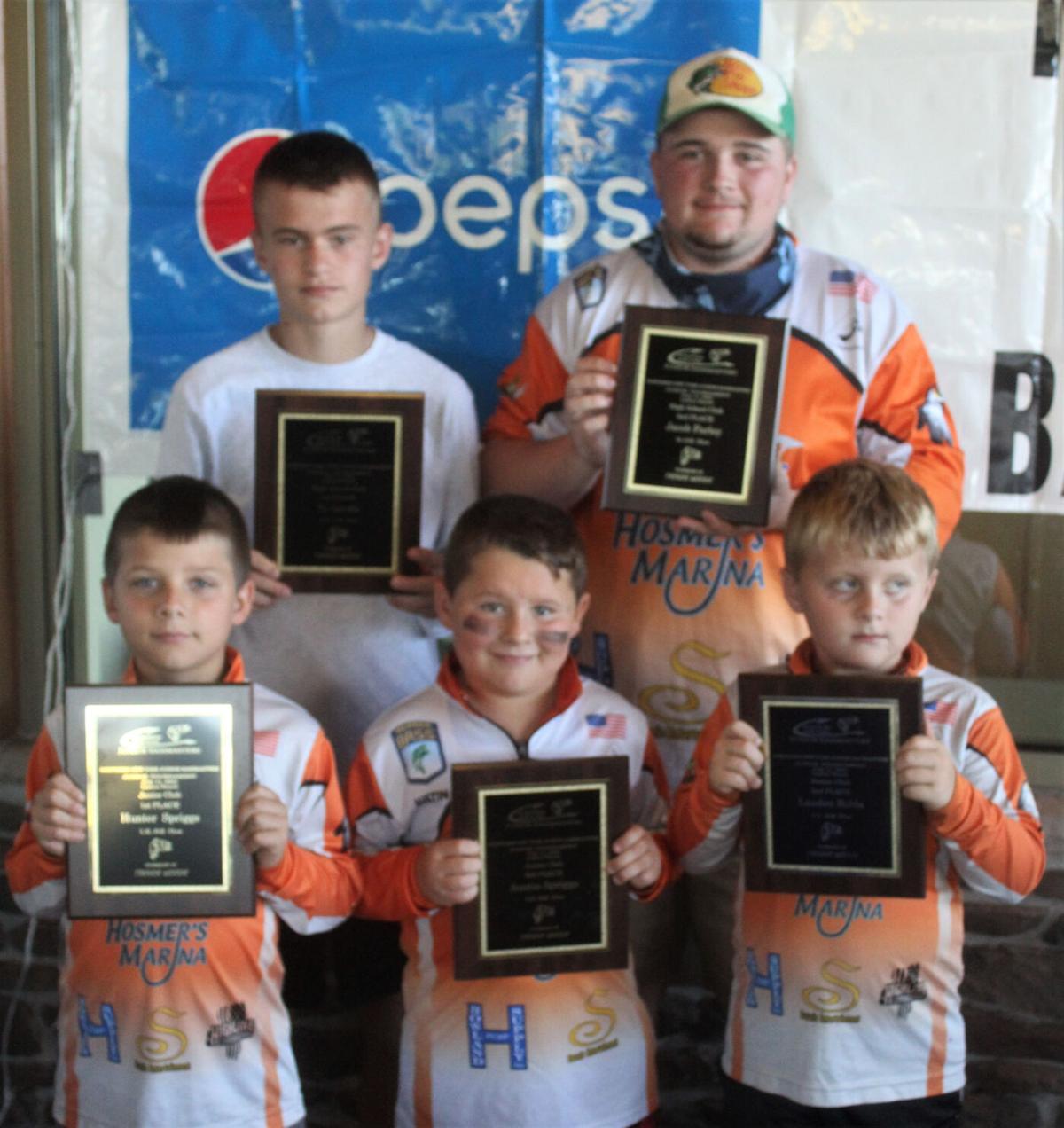 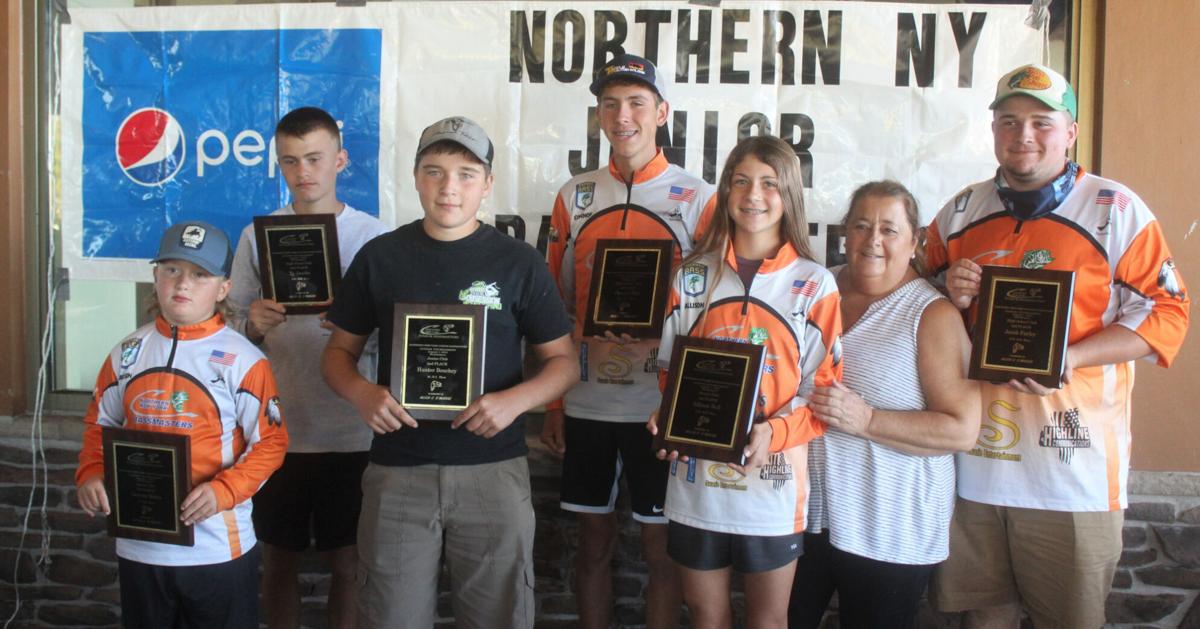 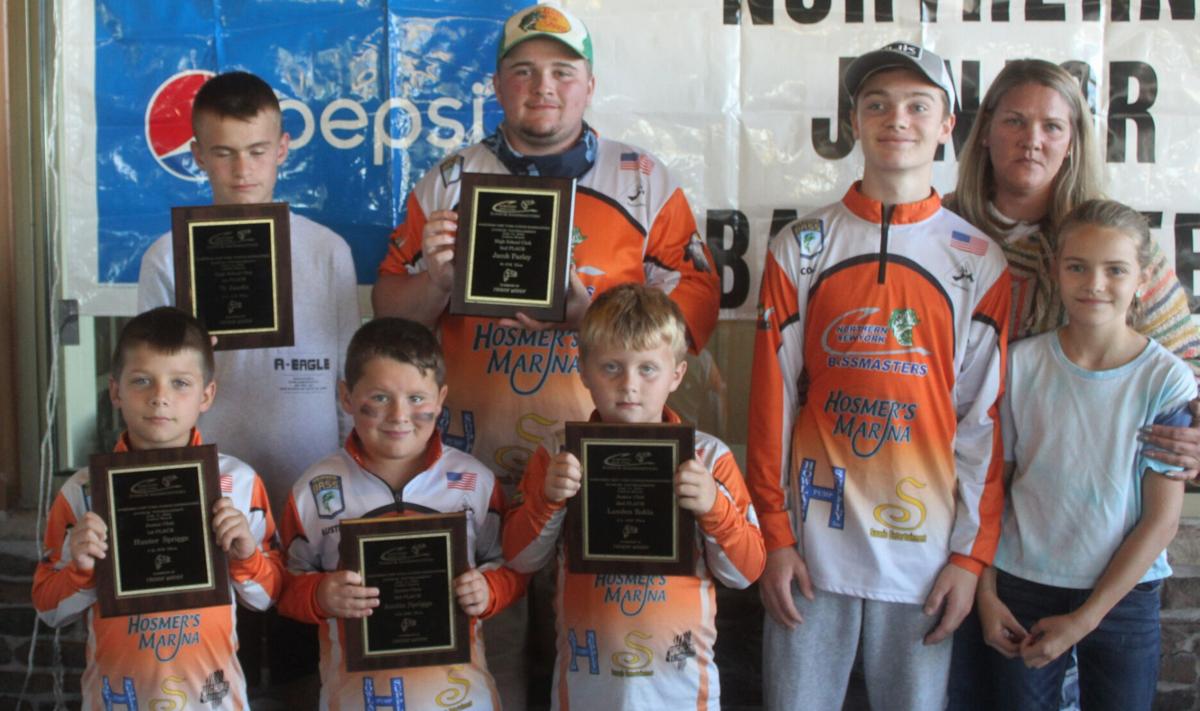 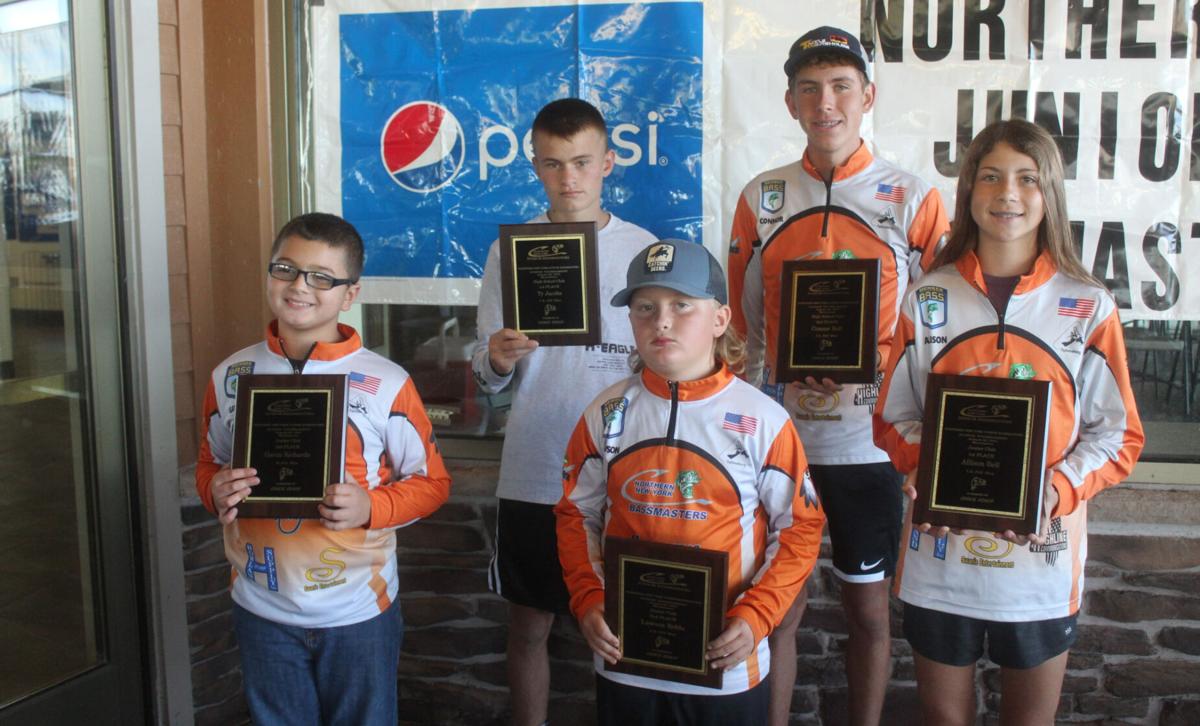 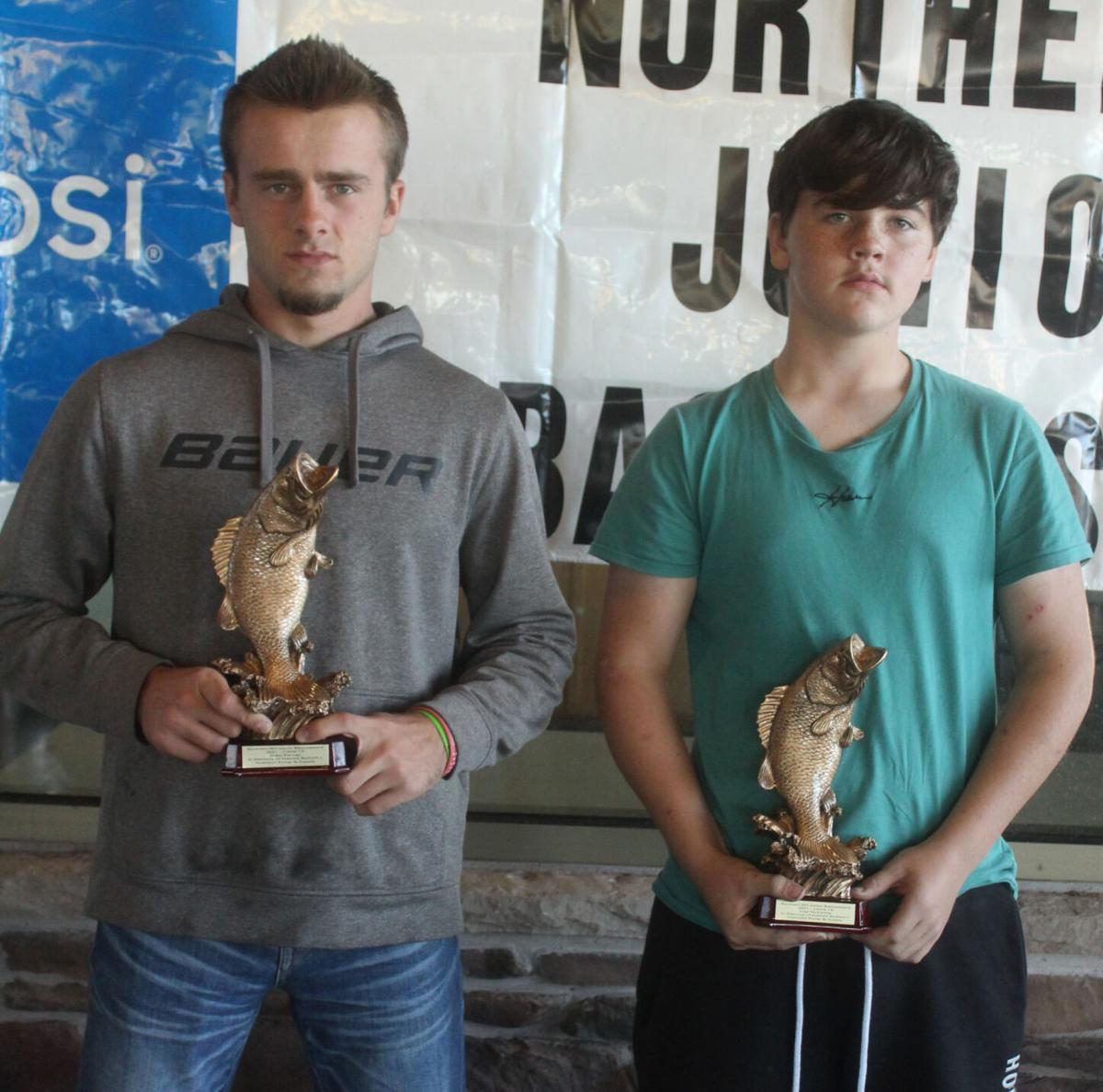 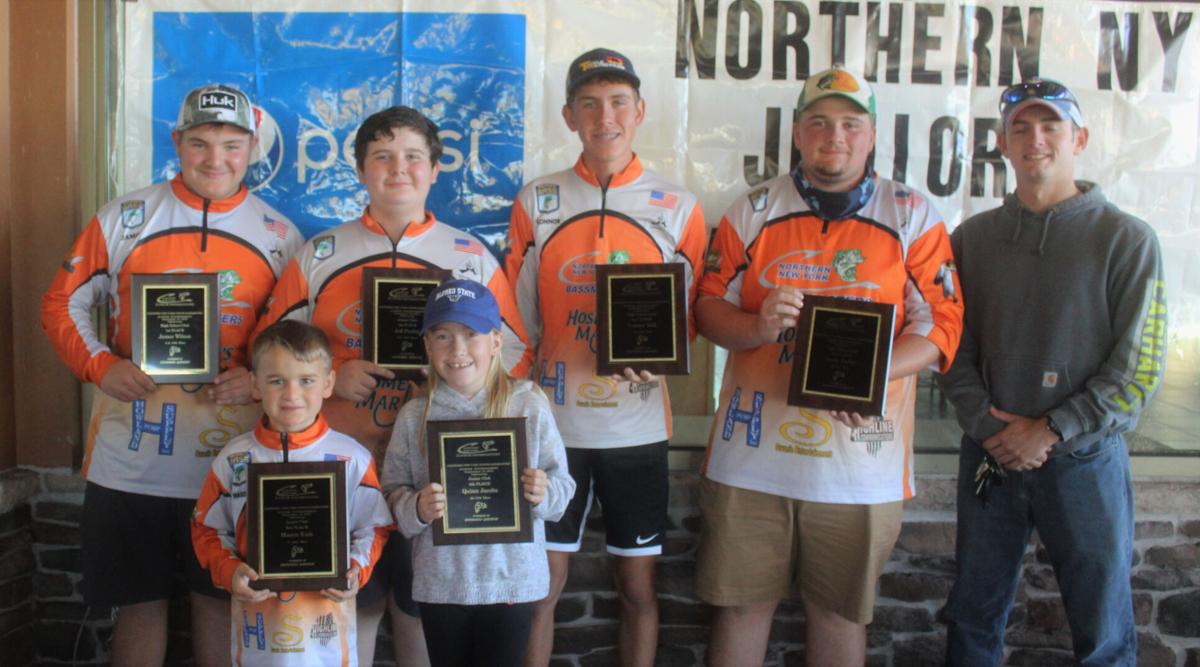 Ty Jacobs of the High School Club and Allison Bell of the Junior Club were honored as the Anglers of the Year at the climax of an impressive 2021 Northern New York Junior Bassmasters Awards Banquet on Sunday. The event was held for the first time at The Window Restaurant in the Dobisky Visitors Center and a large crowd was treated to a fine selection of food and very efficient service.

NNYJBC Co-Director Arlene Kiah directed the event and praised the service of the staff at The Window and thanked the support of the club’s sponsors and the community as a whole and offered special thanks to the volunteer adult boaters who make the club’s tournament trail possible.

She also thanked the donors of two $50 donations for the club. One from Randy and Mary Beth Johnson, grandparents of Hunter and Austin Spriggs, and one from Greg and Alanna Wright, in memory of Richard Gibson.

Ty Jacobs accumulated 796 points on the season in a very close AOY race with Connor Bell and also landed the High School Club Lunker with a 4.80 bass. Alison Bell collected 784 points on the season and Shea Langstaff took Lunker Honors with a 4.87 bass which was the largest fish weighed in during the club’s tournaments.

Both awards were presented in memory of Allen J. O’Marah.

The Angler of the Year Awards were part a series of memorial awards honoring the memory of anglers who have made an impact on the club which has been honored as the New York State Club of the year multiple times.

Starting off the presentations was the first Reel Deal Award which was presented in memory of Mark Morrow whose unexpected passing recently stunned the community. The inaugural awards recognized Camden Griffith, Owen Kennedy and Jordan Duprey as fishermen and community players who always show respect for others, volunteer at club events and display a great attitude.

The 2021 Allen J. O’Marah Leadership Awards went to Andrew Kearns and Mason Kiah as anglers who demonstrate outstanding leadership skills on an off the river. These anglers share their knowledge and love for fishing with others freely and always have a smile to share.

The 2021 Cody Holland Memorial Outdoorsman Awards were presented to Hunter and Austin Spriggs as club members who love the outdoors and are completely content with just being out there taking it all in, someone who will work hard to succeed or conquer the challenge and also find joy in watching others with the same passion.

The River Rat Awards which are presented in memory of Trevor Woods went to Finlay Langstaff, Kaleb Kiah and Cole Woods as fishermen who show a great love for their river community and the sport, who are conservationists and will enjoy the river for their entire lives.

The 2021 COVID-19 Awards which is presented by Howland Pump and Supply in memory of Freddie Badlam went to Drew Piercey and Cael McCarthy.

The 2021 T.E.A.M. Awards presented in memory of Richard Gibson went to Brody Lust and Easton Losey as caring anglers who put themselves out there to help with the club. Together Everyone Achieves More is what TEAM stands for.

The 2021 Hook, Line and Sinker Award presented in memory of Chuck Roach went to Blake Woods and Liam Langstaff as anglers who are well rounded individuals who demonstrate membership responsibility, leading by example to their peers, strong morals, good sportsmanship, love of fishing and are devoted to their communities.

The NNYJBC Tournament Trail featured tournaments staged on the St. Lawrence River out of Lisbon Beach, Waddington, Morristown and Ogdensburg. The Lunker and Sportsmanship Awards at all three tournaments were sponsored by Hosmer’s Marina.

The Lisbon Beach Tournament honored the memory of Trevor Woods.

High School Division leaders were: Ty Jacobs at 15.13 pounds, Jacob Farley at 9.02 pounds and Trent Farrand at 7.42 pounds. Ty Jacobs also landed the Lunker of the day at 4.80 pounds and Matt Kinney received the Sportsmanship Award.

The Waddington Tournament honored the memory of Al O’Marah.

Connor Bell led the High School Club with a 15.61 pound bag followed by Ty Jacobs at 10.89 pounds and Jacob Farley at 10.15 pounds. Cole Woods weighed in the Lunker at 4.22 pounds and Trent Farrand earned the Sportsmanship Award.

The tournament out of Morristown held in memory of Chuck Roach was highlighted by Shea Langstaff landing a 4.87 pound Junior Club Lunker which was the largest fish weighed in during the 2021 Tournament Trail. Allison Bell topped the Junior Club leaderboard with a 13.58 pound bag followed by Lawson Robla at 12.33 pounds, Gavin Richards at 9.64 pounds and Owen Ames at 9.45 pounds.

The trail concluded with a tournament out of Ogdensburg staged in memory of Richard Gibson. Jed Farley led the Junior Club at 11.29 pounds followed by Mason Kiah at 7.36 pounds, Jackson Fortin at 6.82 pounds and Quinn Jacobs at 6.70 pounds. The High School Club leader board was led by James Wilson at 14.56 pounds followed by Connor Bell at 12.52 pounds and Jacb Farley at 9.94 pounds.