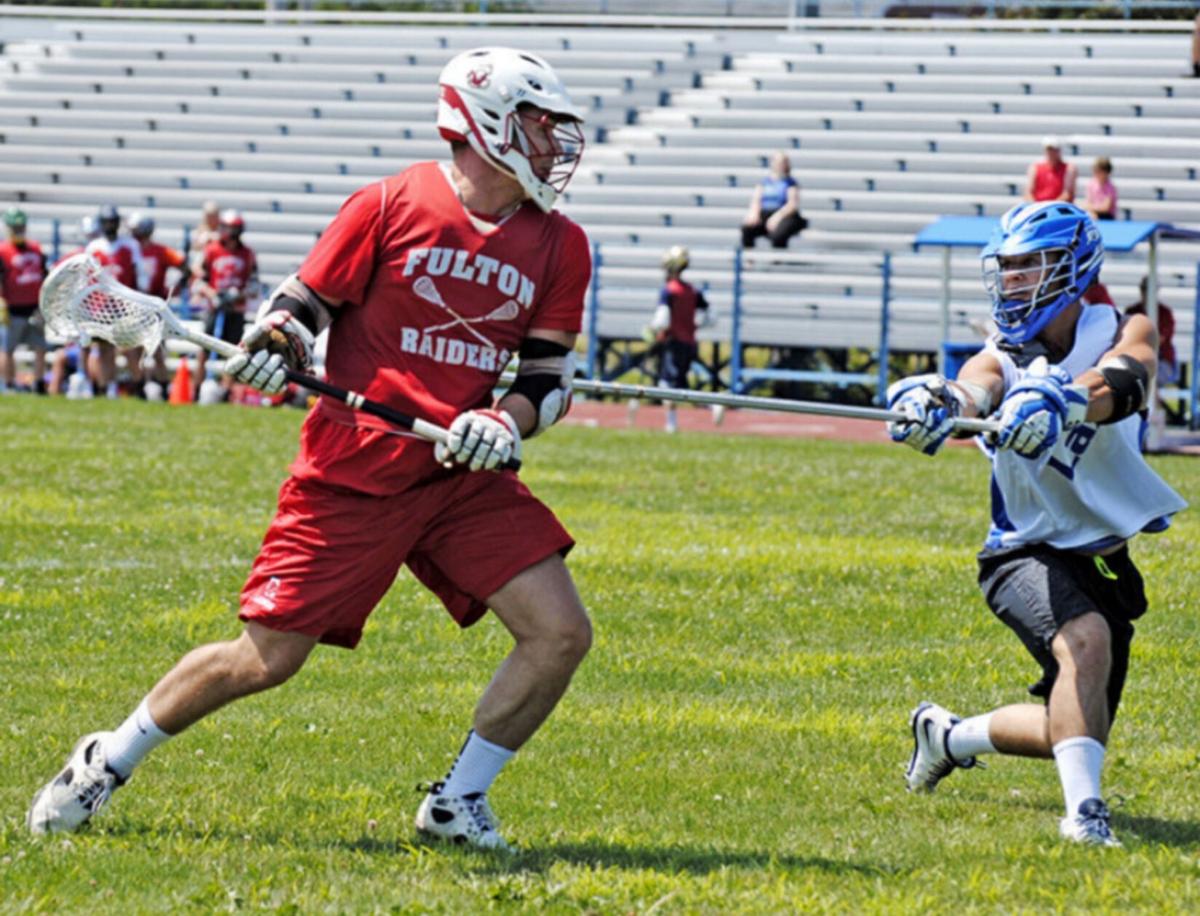 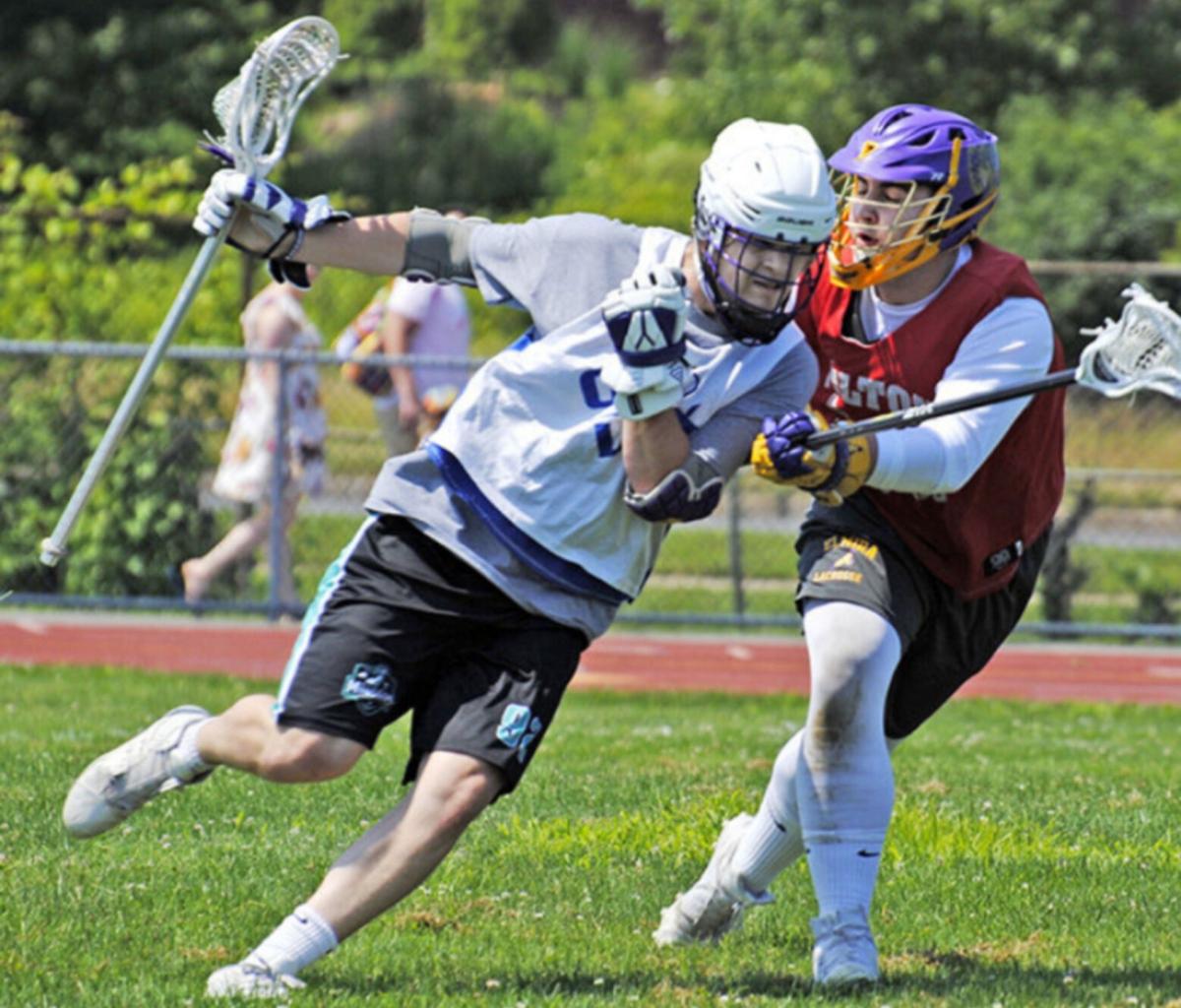 Oswego alum tries to work past a Fulton defender during the 2019 alumni lacrosse game between the two rival programs. Provided photo.

Oswego alum tries to work past a Fulton defender during the 2019 alumni lacrosse game between the two rival programs. Provided photo.

OSWEGO COUNTY — Robert ‘Doc,’ Nelson recently took pause noticing his youth boys lacrosse summer team was comprised half of players from the Oswego High School program with the rest from Fulton, signifying the bond between the rivals and partners that remains strong after 37 years.

The neighboring districts will celebrate that connection on Saturday, July 31, by facing off in their men’s lacrosse alumni rivalry game at noon at Chase Road in Oswego.

Nelson, the longtime Oswego varsity head coach, has worked with Fulton head coach Aaron Koproski to organize the game’s return after being held in 2019. Plans to play last year were scrapped due to state COVID-19 mandates.

This year’s matchup will be followed by a social hour afterward from 2:30-4 p.m. at Chubby’s Sports Bar and Grill in Fulton.

“There will probably be some adult beverages, and a lot of lying and exaggeration there, but it comes with the game,” Nelson said.

Fulton claimed a 12-9 victory in the last outing, which was the first attempt to rekindle the alumni clash in several years.

Nelson recalled a game in the former Pathfinder Dome in Oswego more than a decade ago and a few other attempts before the 2019 event brought more than 50 players together from the two programs combined.

That clash featured a wide array of former standouts on each side, from players that graduated more than 30 years ago to some who had just finished their varsity career a few months prior.

“That part of it was probably the best, just reconnecting with some of those players that I coached, and then getting to know some of the older alumni that I didn’t get to coach, listening to their stories about when they played,” Koproski said.

Nelson and Koproski have convened in recent years to spark the annual rivalry during the varsity season by introducing the Pathfinder Crosse in 2015.

The trophy — named after James Fenimore Cooper’s 1840 novel “The Pathfinder,” which is set along the Oswego River and is an homage to the Native, French, and British history of the area — has become a coveted reward to their series in recent years, and coaches hope the alumni game will stir similar excitement.

“It feels like something that is best for both programs, because it gets the best out of each,” Koproski said. “Two years ago, we won the Pathfinder Crosse trophy, and Oswego came back and made sure they got it back this year. I think that’s really big for both programs and it just transpires into the alumni game, it’s nice listening to the stories and the bantering that goes on back and forth.”

Nelson spoke of Fulton coaches opening their summer leagues to Oswego when the Buccaneers launched boys lacrosse in 1984, and credited those leagues for linking the programs eternally.

They have often paired up to field various offseason travel teams through the years, which led to the existence of a plethora of connections between coaches and players across the aisle through nearly four decades.

“If you ask anyone who played in that time, the mid-late ‘80s, they all speak very fondly of it, so that kind of set the precedent,” Nelson said. “Everyone talks about the Oswego-Fulton rivalry, and we certainly had great games, but it was very clear that they needed us, and we needed them, to really survive, and I don’t think that has changed.”

The Red Raiders will be represented by more than 20 players while around 15 former Oswego players had signed up in the weeks leading in.

The Buccaneers will have an age range from at least one 1990 graduate to some 2019 standouts, while Fulton is expecting a similar showing while suiting three players fresh off the NCAA Division III Tournament in May.

Both Koproski and Nelson are hoping to make the game an annual outing on the last July weekend, as they planned in 2019 before the COVID-19 pandemic prompted a cancelation last summer.

“As long as we have the alumni that want to come back, we’ll continue to do it and honor them and show them that we want to tie them into our programs,” Koproski said.