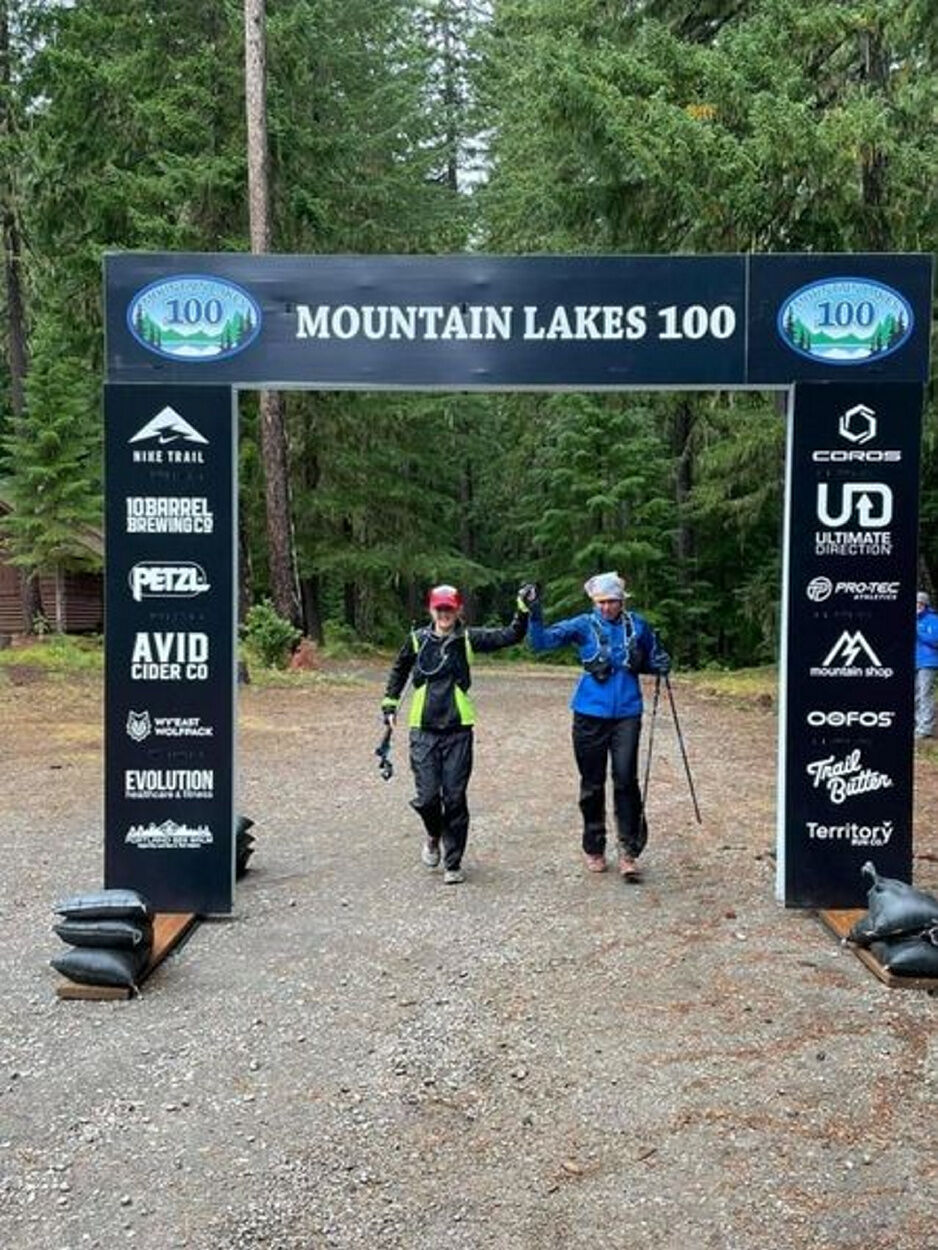 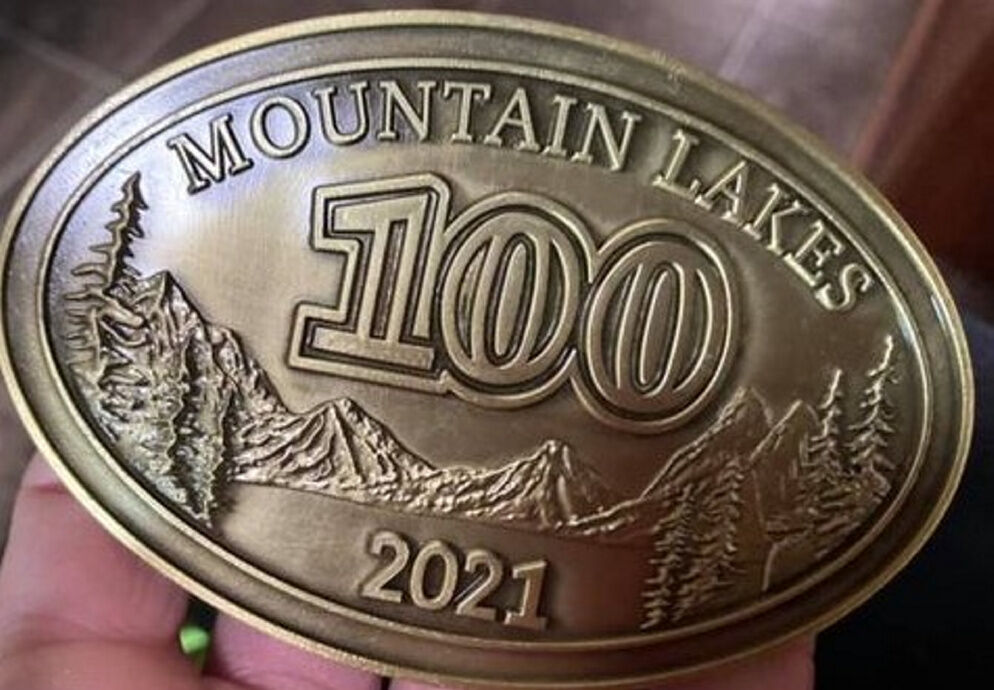 Running partners Cheryl Steiner of Beaver Falls and Rachael Peters of Watson competed in the Mountain Lakes 100 in Oregon in September, finishing in just over 28 hours.

Due to fire damage, the location of the race changed to Clackamas Lake Historic Ranger Station instead of the usual Olallie Lake. The scenic route ran mostly along the Pacific Crest Trail with reportedly “the best trail running Oregon has to offer — technical and rocky sections, views of mountain peaks and lakes, and luscious sections of single track.”

She noted it rain during most of the race with temperatures in the 40s.

“It was cold and wet — it was miserable,” she said. “Some dropped out due to hyperthermia — some were dressed in tank tops.” Laughing, she added the most rewarding aspect of the run was “completion.”

She noted the worst part of the run was getting through the night because it was cold and wet.

The overnight segment of the 100-mile run, for which competitors only had 30 hours to complete, was 40 miles down and back.

“We were freezing cold and soaking wet which made it miserable,” she said, noting there was no time for sleep.

But her friend and running partner kept her going.

“Finishing a 100 miler is never a given, there are so many things that can happen or go wrong,” said Mrs. Steiner. “The courses are challenging, sometimes people fall and get injured. Many people have stomach issues and can’t hold down food or drink, and cannot continue. Just completing one is immensely rewarding, after all the hard training you put in. This run I was especially happy for Rachael, to see her complete her first 100 mile.”

Mrs. Steiner agreed the most difficult part the run was the weather.

“I don’t like the cold, and prefer very warm temperatures,” she said. “We didn’t expect rain. We left home eight days before the race and the weather forecast wasn’t predicting rain so I didn’t bring all my rain gear. We did go out and purchase rain gear, but it was still hard to stay dry and we were soaked most of the day, especially our feet. The temps were mostly in the 40s, and may have even dipped in the 30s in the higher elevations, so I was miserably cold.”

The running duo had a support system with Mrs. Steiner’s husband Jay.

“At about 57 miles, we finally met with Jay again,” she said. “He was at an aid station with the RV rental and were able to completely change our clothes and get warm. We decided to put gallon baggies over our socks before we put our sneakers on, and this worked well to keep our feet dry and warm.”

Mrs. Steiner said her husband and stubbornness kept her going.

“He’s always our biggest cheer leader and supporter,” she said. “Stubbornness also plays a big role, and just the desire to finish. Even though I know Rachael would’ve finished with or without me, I really wanted to finish this one to be there for her on her first finish.”

Although some take time to sleep or rest, the Peters-Steiner team did not.

“I do not even like to ever sit down at the aid stations, because I stiffen up especially when very cold and find it harder to get moving again,” said Mrs. Steiner. “They had tents and chairs, with electric heaters at the aid stations. It would have been far too tempting to not head out on the trail again.”

Mrs. Steiner admitted there came a point where she was ready to give up.

“At about 45 miles we had reached a high elevation point, and would remain up on the high ridge for about another 25 miles,” she recalled. “It was cold and windy, and we were soaked to the bone. The thought of not even being half way, and still having 55 miles to go was pretty daunting. I actually tried to text Jay and tell him I was going to drop at the next aid station because I was frozen. But the text never went through, and when we got to the next aid station at mile 49, he wasn’t there — he was only allowed at five different aid stations. The aid station ended up being in the middle of nowhere, with no way for the volunteers to get us out anyway. So there really was no choice but to head to mile 57 and meet Jay. By the time we got there, I was in a different mind-set after I got warmed up, and knowing we were well over half way at that point.”

The ladies were pleased with their results finishing in 28 hours, 4 minutes and 41/42 seconds.

Mrs. Steiner finished 63 out of the 89 finishers and 20th for females right behind Ms. Peters in both groupings.

Having run a number of ultra races, Mrs. Steiner was ranked 71.4 for the average, based on age and number of ultra ran. “I have 12 results, some ultras I’ve placed as high as the 92nd percentile, others I’ve not had such good days, and placed as low as 45th percentile — 71 is my average,” Mrs. Steiner explained. “This is Rachael’s only result on the website, so she ranked 71% for this race only. She finished seventh out of 12 for her age group.”

Mrs. Steiner said she was happy to finish.

“My pie in the sky goal is to finish one in under 24 hours — maybe someday,” she said.

On the other hand Ms. Peters said she has crossed doing a 100-mile run off her bucket list and does not plan to run another.

As part of signing up for the Mountain Lakes 100, participants were required to perform trail work.

For their commitment, the local runners performed two days of work on the Otter Creek Horse Trails, rerouting trails that were too steep, or overused, to new areas under the direction of a Department of Environmental Conservation officer.