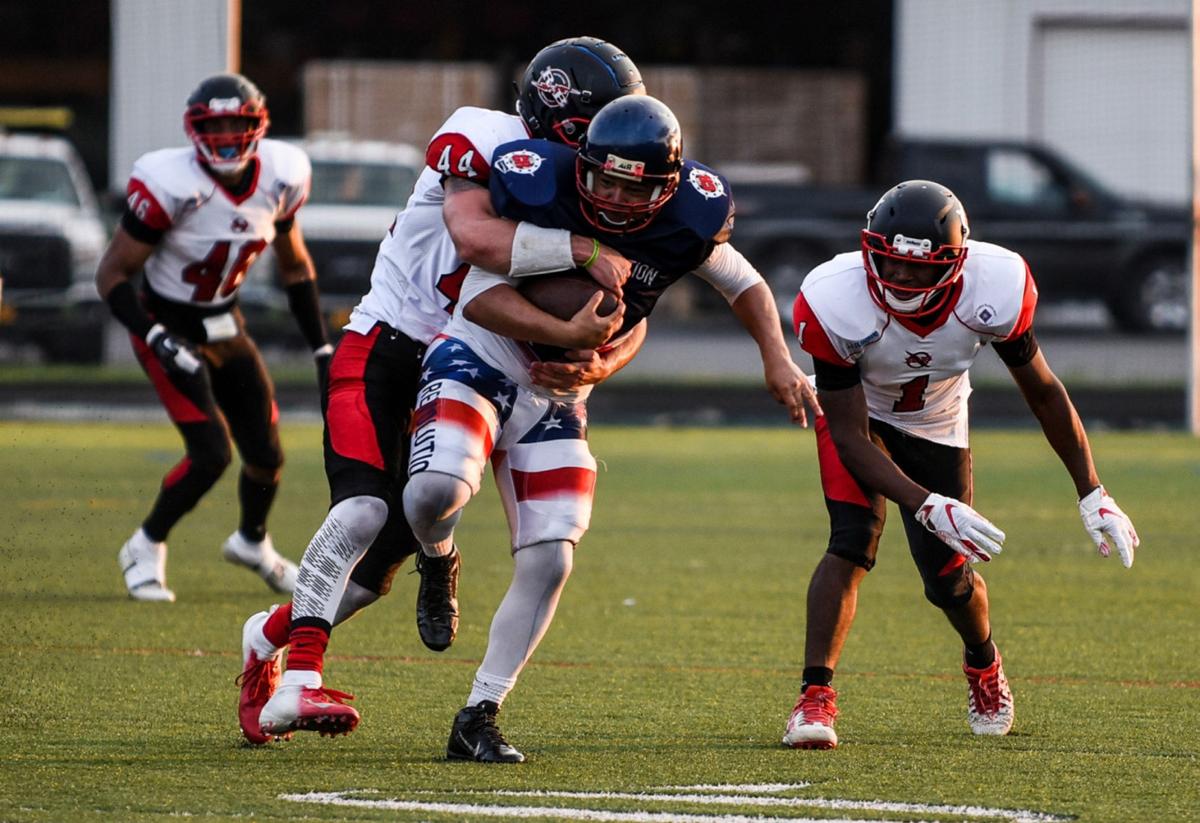 The Carthage Revolution, shown in a game against the Watertown Red and Black in 2018, are tentatively scheduled to open their Northeastern Football Alliance season on July 11 at the Troy Fighting Irish. Watertown Daily Times 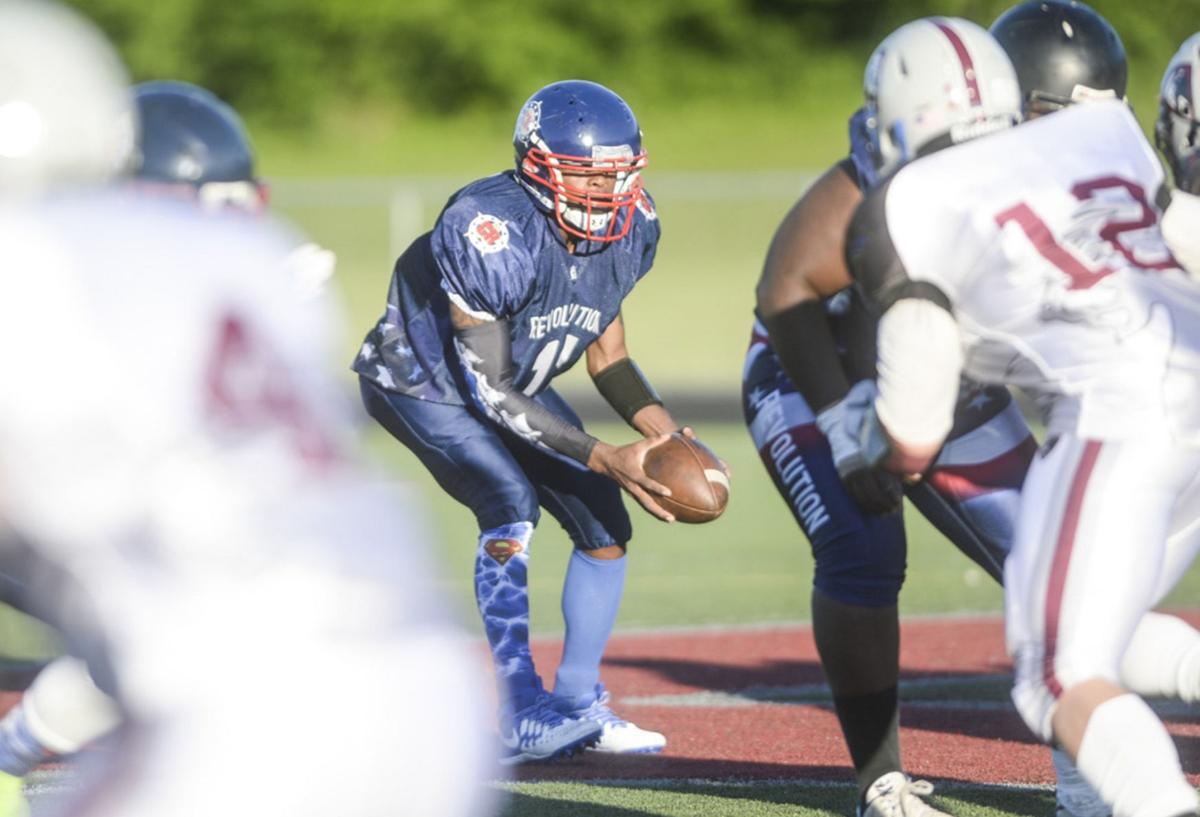 The Carthage Revolution plays against the Auburn Pride in a Northeastern Football Alliance game in June 2018 at Carthage High School. Watertown Daily Times 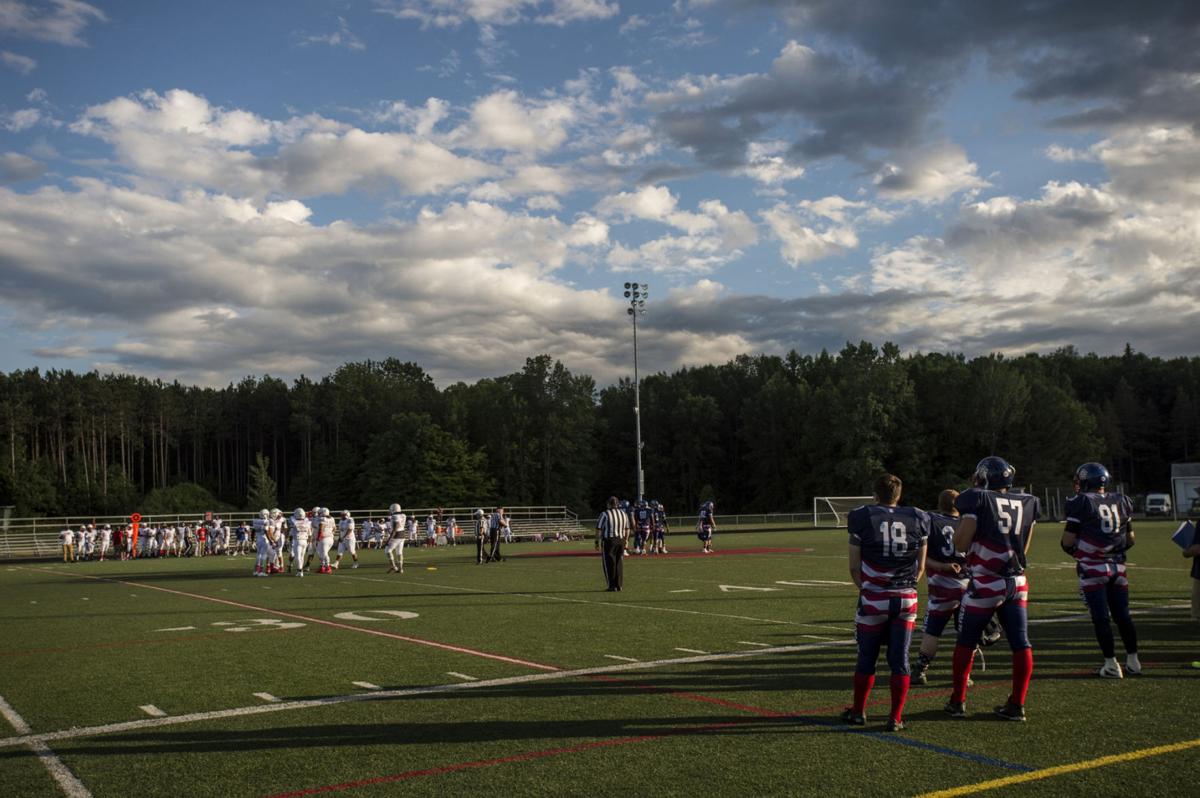 The Carthage Revolution football team gathers before a game against the Charlotte Colonials in June 17 at Carthage High School. Watertown Daily Times 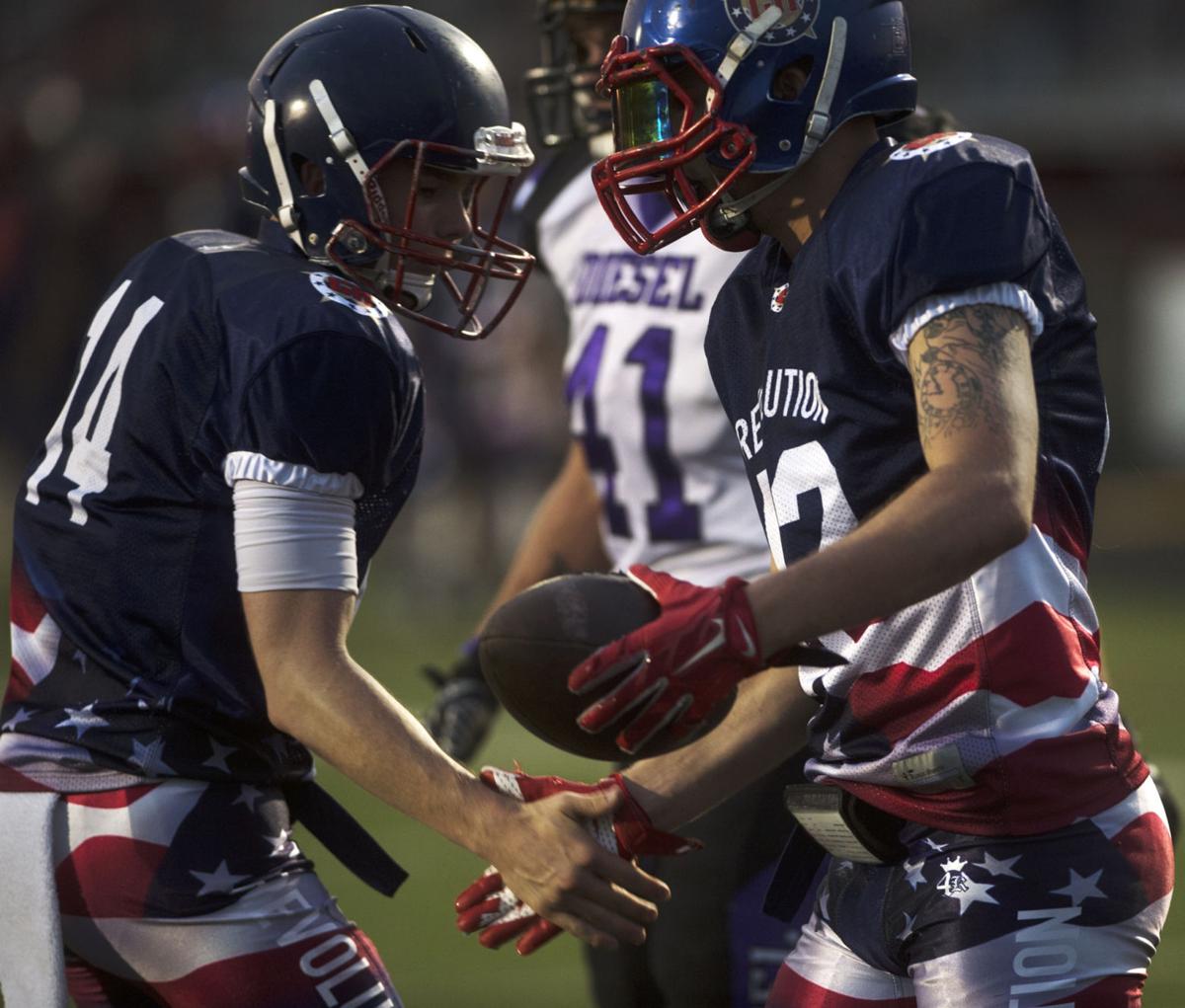 The Carthage Revolution’s Jordan Lancaster, left, and Kendall Robertson slaps hands after a play during the Northeastern Football Alliance’s “AA” Division championship game in September 2017 at Carthage High School. The Revolution won, 53-6, to claim the title.

The Carthage Revolution, shown in a game against the Watertown Red and Black in 2018, are tentatively scheduled to open their Northeastern Football Alliance season on July 11 at the Troy Fighting Irish. Watertown Daily Times

The Carthage Revolution plays against the Auburn Pride in a Northeastern Football Alliance game in June 2018 at Carthage High School. Watertown Daily Times

The Carthage Revolution football team gathers before a game against the Charlotte Colonials in June 17 at Carthage High School. Watertown Daily Times

The Carthage Revolution’s Jordan Lancaster, left, and Kendall Robertson slaps hands after a play during the Northeastern Football Alliance’s “AA” Division championship game in September 2017 at Carthage High School. The Revolution won, 53-6, to claim the title.

The status of the Carthage Revolution’s season in the Northeastern Football Alliance, tentatively scheduled to begin in nearly three weeks, remains in a state of limbo.

Yet if the league’s season, which has been delayed because of the coronavirus pandemic, does get off the ground, the Revolution may be facing a manpower shortage.

Fort Drum acting senior commander Brig. Gen. Brett Funck has placed a temporary hold on soldiers from the base participating in sports because of the pandemic, according to Carthage majority team owner Leon Aldridge.

The Revolution has historically been made up of mostly soldiers from Fort Drum and this year’s roster is no different.

“They put the soldiers on a hold as far as having contact sports and things like that,” Aldridge said. “So right now, it kind of slows us up a little bit, but we’re going to continue to progress and we’re going to continue to do the things we do and hope to get the soldiers back out here active and enjoying some of this football that we love playing.”

Aldridge remains hopeful team members from the military will be able to play during the season, but says the Carthage team can muster enough non-military players to field a team this year.

That is if there is a season — which is still in question because of the pandemic — a decision the NFA will make in a league meeting later this month.

“Nothing new, I’m being honest with you,” Aldridge said. “I’m waiting patiently to find out what the commissioner wants to do, we haven’t heard anything as far as changes on that front.”

The NFA’s season, originally scheduled to begin on May 30, was postponed until July 11 because of the pandemic.

“If they choose for us to not play this year, then we will not. If they say we’ll get the blessing to play, then we will,” Aldridge said. “And I think that’s what we’re holding off on, the commissioner (J.R. Bennion) doesn’t want to rush anything, he wants to see how everything goes and if there is a possibility of us playing, then we’re going to take that opportunity and go with it.”

The prospects of an NFA season getting under way depends greatly on coronavirus restrictions being lifted across the state.

With much of the state currently in Phase 3, including the north country, Revolution team management is hopeful Phase 4, which includes recreation businesses reopening, will be reached in time to salvage some sort of season.

“It’s a different time of life right now, everybody is on edge and rightfully so,” Aldridge said. “We’ll do our best to stay within the guidelines and follow the rules, and whatever New York State has for us, then that’s what we’ll do.”

Aldridge also hopes that if the region, as well as those that contain NFA teams in the state, reaches Phase 4 in time for the league to begin its season, that the hold may be lifted on Fort Drum soldiers.

“We pray that he will (lift the ban),” Aldridge said of Fort Drum’s active commander. “With everything else going on, people are starting to get outdoors again. People want to be able to do the things that they love. And with that being said, I hope he sees that and allow these young soldiers to get out and have the opportunity to play football.

“He’s knows what’s best for his soldiers, we know he does, he’s doing what’s best for Fort Drum and the United States Army and we will follow whatever guidelines he puts forth.”

If not, Aldridge and team general manager Kermit Allen, as well as first-year head coach Jon Fisher have a plan. Aldridge said the team has roughly 60 players from the military, as well as about 30 civilian players.

“With our civilian forces, we would have enough players where we can actually play a game,” Aldridge said. “You only have to have a total of 18 players. Like last year when we went to Troy, we only had 21 players, and we played a game. We went to Southern Tier and we only had 19. We would have enough players to play with our civilians, but we would love to have our military guys right there behind us, backing us and leading the way.”

Aldridge said the team will be prepared to follow coronavirus guidelines, whether at practices or on game day.

“We have our guidelines, we have everything set up that if we are able to go, we’ll have the guys’ temperatures taken, and we would take a record of them,” Aldridge said. “So our medical staff would be available and we would do the precautions that we need, whether it be asking questions, checking temperatures, wearing a mask if needed. We’re trying to do everything we can to stay within the CDC guidelines and New York State’s as well.

So far, the Revolution has yet to hold a practice as a team, although some team members are working on drills on their own.

“Everything as of right now has been livestream,” Aldridge said. “A lot of guys are doing a lot of drills on their own and conditioning on their own, I know a couple guys may have gotten together and ran a couple routes within their own group. But no, we haven’t been able to do any team organized practices yet.”

Carthage is tentatively scheduled to play its first three games on the road, opening on July 11 at the Troy Fighting Irish, with its home opener on July 18 against the Broome County Stallions.

Aldridge said that push come to shove, he might even consider suiting up for the Revolution again.